It might not be located in the most beautiful part of London, but Qbic Hotel London City in Aldgate, East London, scores highly on all the essentials for a budget hotel in London: price, location and cleanliness, not to mention a friendly and relaxed vibe.

[Note: this review of Qbic Hotel London City was first published in 2015 so some of the details might now be out of date]

Close to Aldgate East station, where the Tube will whisk you straight to Tower Hill, Westminster and Victoria in a matter of minutes, Qbic East London low-cost London hotel has been a welcome addition to the borough since it opened at the end of 2013, tucked away in a park just off Whitechapel Road. 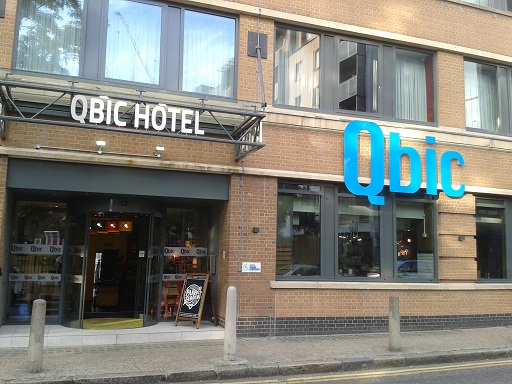 The Dutch company, which also has a hotel in Amsterdam, has a wacky website which proclaims its hotel philosophy thus: ‘A place that celebrates life rather than sucks life out of it. A hotel that’s built on creativity and a belief that you don’t have to accept the conventional.’ This translates into not only Qbic hotel being good value for money but, for a London hotel which won’t break the bank, a fun and friendly hotel experience. 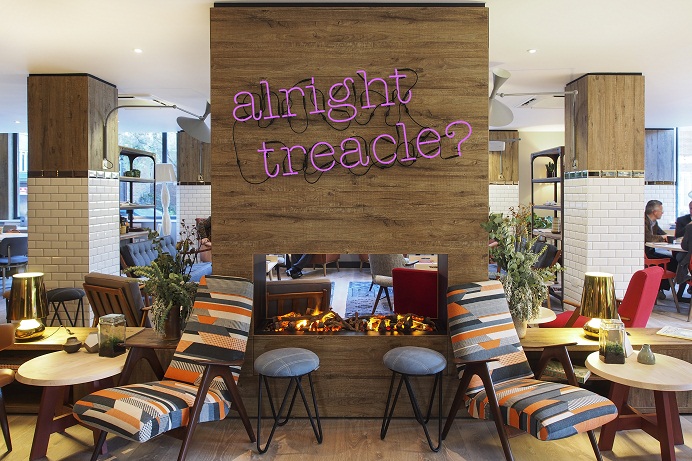 The entrance to the bar. Thankfully the hotel is on the fun side of ‘cool’

This means that it’s like a very smart backpackers hostel: friendly staff, young people sitting around the bar checking emails, plus self-consciously groovy art installations dotted here and there, not to mention inspirational notices in the lift. 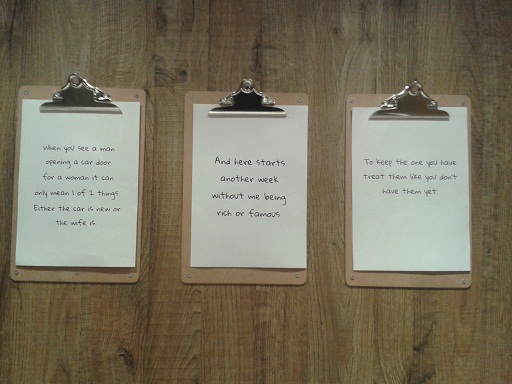 Something to read while you’re in the lift

But it is all in good fun and the room could not be faulted: a massive double bed, sensible things such as clearly-labelled light switches, and a pod-like bathroom which was connected to the bedframe in an ingenious way which presumably made it very easy to fit out the rooms (and to give the hotel its cubic/Qbic pun). 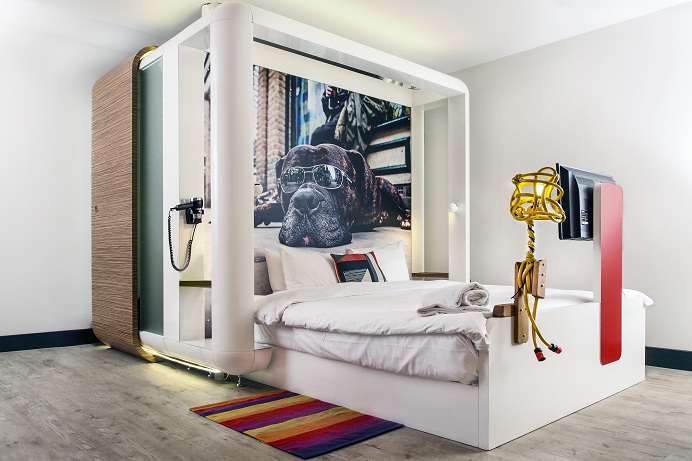 The rooms are clean, spacious and have an ingenious bed/bathroom frame arrangement (the bathroom is behind the dog)

There were inspired touches such as teddy bears rather than a bland notice to hang on the door to say you do not want to be disturbed, and wi-fi was free and easy to sign on to. There was also a smart-looking (and free) coffee machine on every corridor. 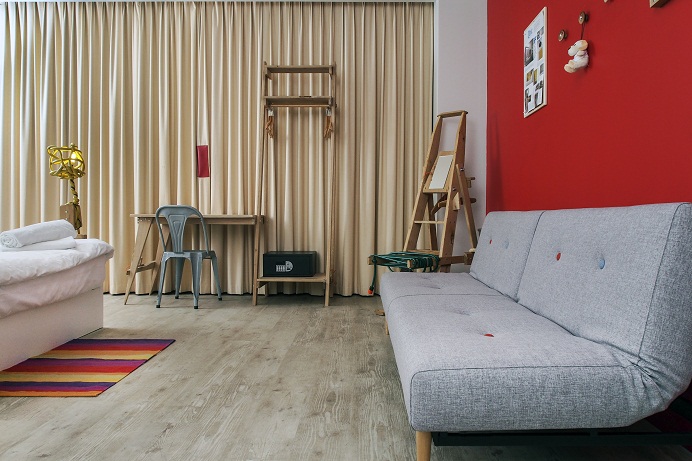 The rooms have desks, places to hang clothes and wacky bits of arty furniture

If I was being picky then I’d say that my rainfall shower wasn’t particularly powerful (particularly as the company says one of its core essentials is to provide a ‘great shower’), the sliding door to the bathroom doesn’t offer total privacy if you’re sharing a room and the flatscreen TV attached to the bed meant it was really close when watching television in bed, but those are minor points: I also really liked the bleached floorboards which gave it a Scandinavian feel. 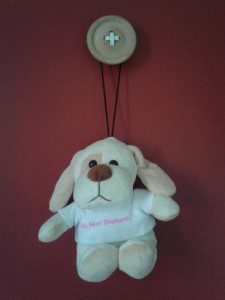 The ‘Do not disturb’ bear

It was pretty loud and lively at the restaurant downstairs – which has the daft name of Parts & Labour – as my visit coincided with its monthly live music night, but all three bands were great and the crowds of locals gave it a very neighbourhood vibe, rather than feeling touristy. Both the food and service were excellent.

We started off with the bread basket with hard-to-resist wild garlic butter (£3.50) and then had the salmon fishcake with spinach (£11.50) and the glazed beef short ribs (£16.50). The prices weren’t budget but then neither was the food, and if the alternative is taking your pick down Whitechapel Road then Parts & Labour is definitely the better choice. 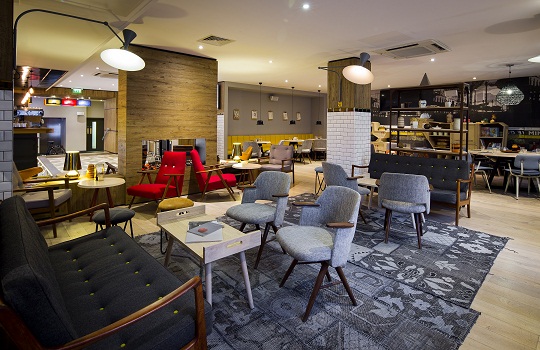 Qbic’s lounge/bar/restaurant downstairs was a place to eat, drink and chill (and wasn’t actually empty as this photo would imply)

The drinks list was good too, with an impressive array of local craft ales, and I finished the night with my first ever amaretto sour which sounded like a oxymoron but which was very nice indeed. 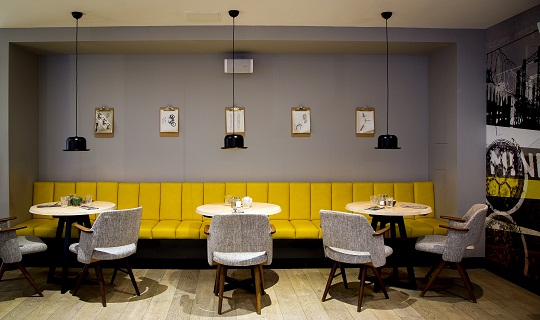 The restaurant, Parts and Labour, opened earlier this year

Breakfast the next day (after an extremely comfortable night’s sleep in my vast bed) wasn’t bad either, with a buffet of cereal, pastries, toast and cooked options too. Overall it treads the line between boutique and East London budget hotel well, and one could feel at home here very quickly. And hopefully the neighbourhood will improve to match the smart hotel in its midst.

If you like reviews of budget hotels in central London then you’ll love: