As I arrived at The Grand Hotel Eastbourne to be welcomed by the uniformed door staff and ushered into the hotel’s vast entrance hall, I couldn’t help but think they made hotels on a larger scale in days gone by. To arrive at The Grand Hotel in Eastbourne in East Sussex, is to step back in time to Victorian times and the heyday of the British seaside resort. 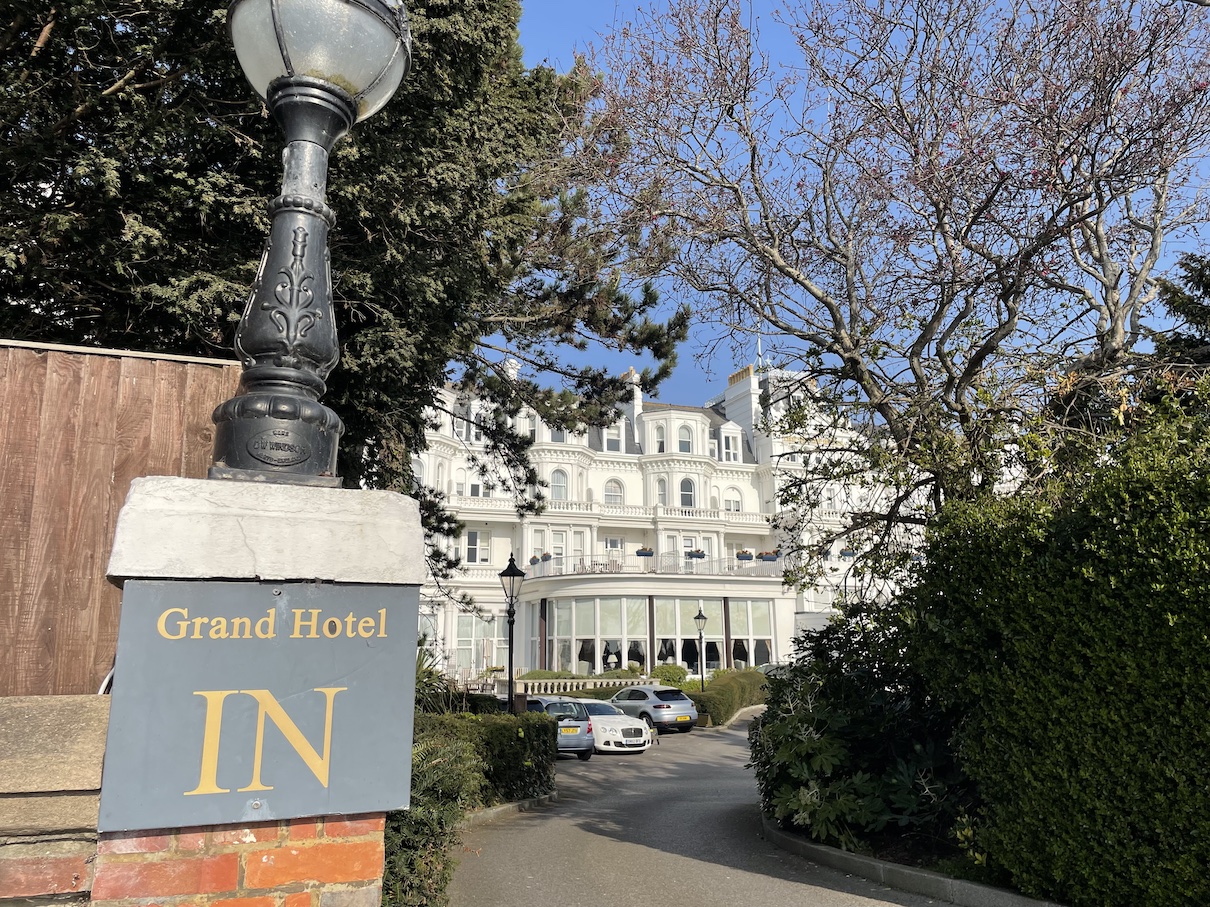 This vast 152-bedroom hotel, which claims to be Britain’s only five-star seaside hotel, was built in 1875 and its gleaming white building has taken pride of place on Eastbourne’s seafront ever since. It is one of those places which is a destination in itself and certainly lives up to its name, being unmissable the moment you arrive in this pretty coastal resort. 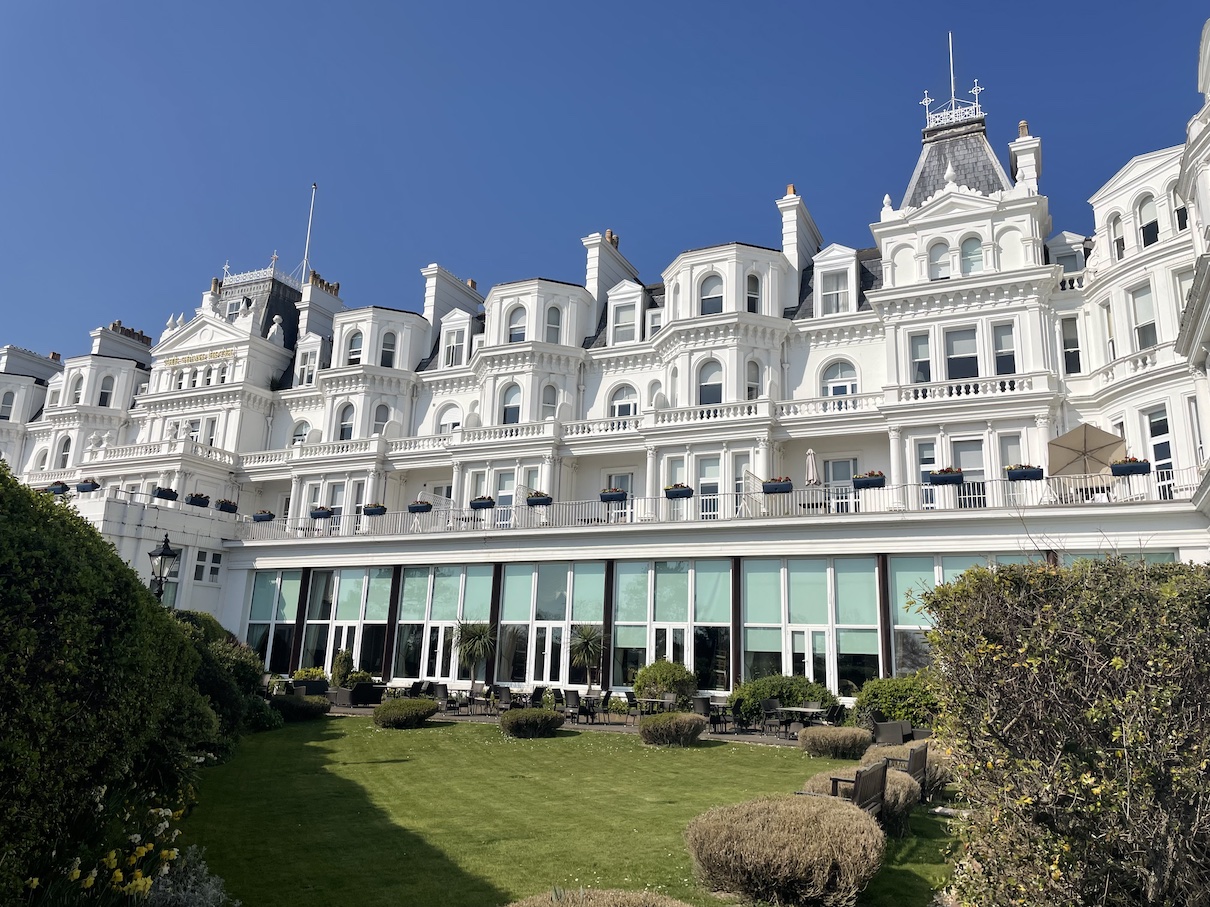 Many of The Grand’s rooms overlook the seaside

A stay at The Grand Hotel Eastbourne

If you are used to the more limited size of city hotels, then the sheer scale of The Grand will come as a pleasant change. The place is enormous from the very start, when you arrive though revolving doors into the hotel and are greeted with the sight of the huge pillared lounge at the end of the reception area. Off the entrance hall are several large lounges on the ground floor where guests and day visitors can have morning coffee, afternoon tea, lunch, dinner and evening drinks as well as be entertained by live music and evening entertainment, while across the hallway is the largest dining room I have ever since in a hotel, spreading on for three rooms which run almost the length of the hotel.

As well as the dining room, where breakfast, lunch and dinner is served, at the far end of The Grand is the Mirabelle restaurant which offers a fine-dining experience without leaving the hotel. There’s also a hotel spa with gym and indoor swimming pool, a small row of shops, sweeping staircases and basically everything you’d expect if you stepped back in time to the grand hotels of yesteryear. 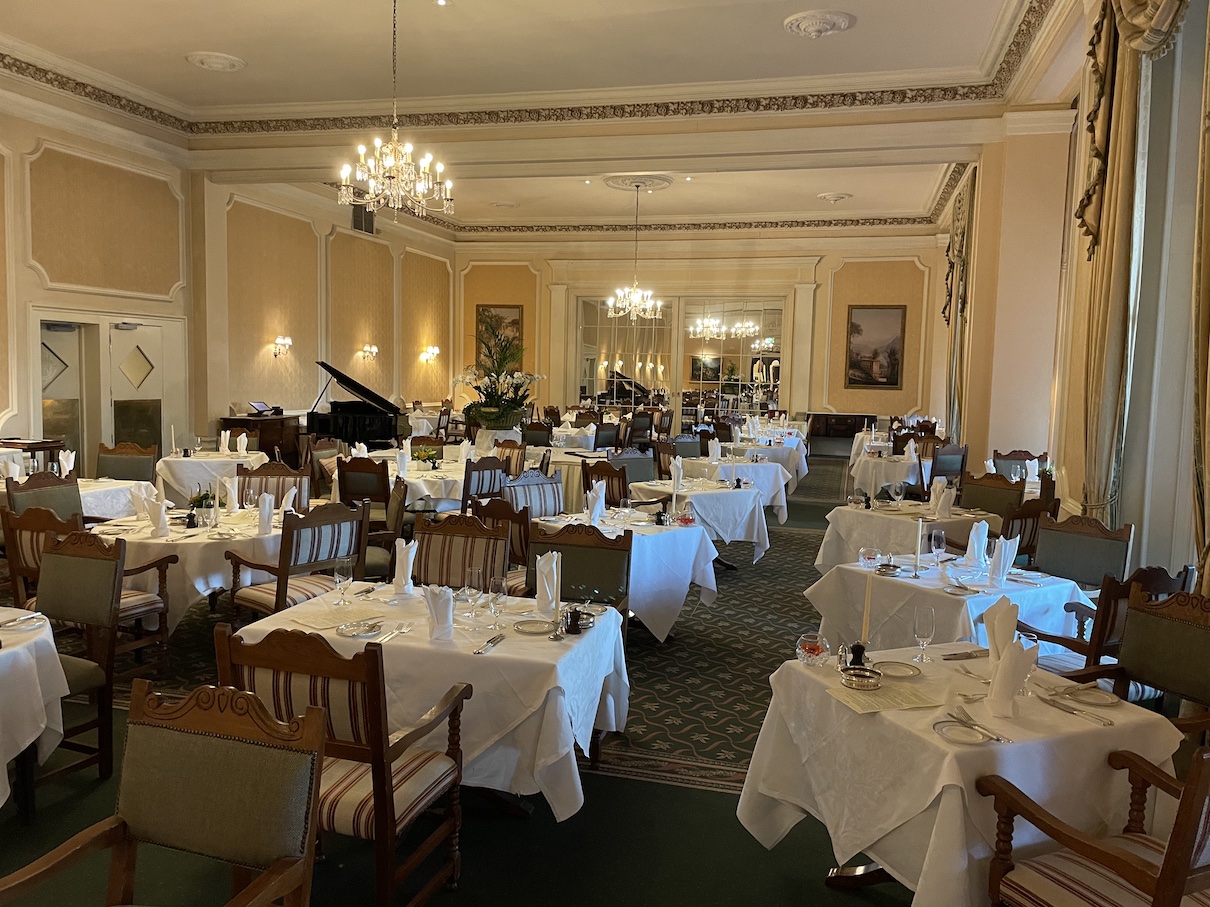 The huge Garden restaurant at The Grand Hotel, Eastbourne (there’s another one the same size the other side of the mirrors at the end) 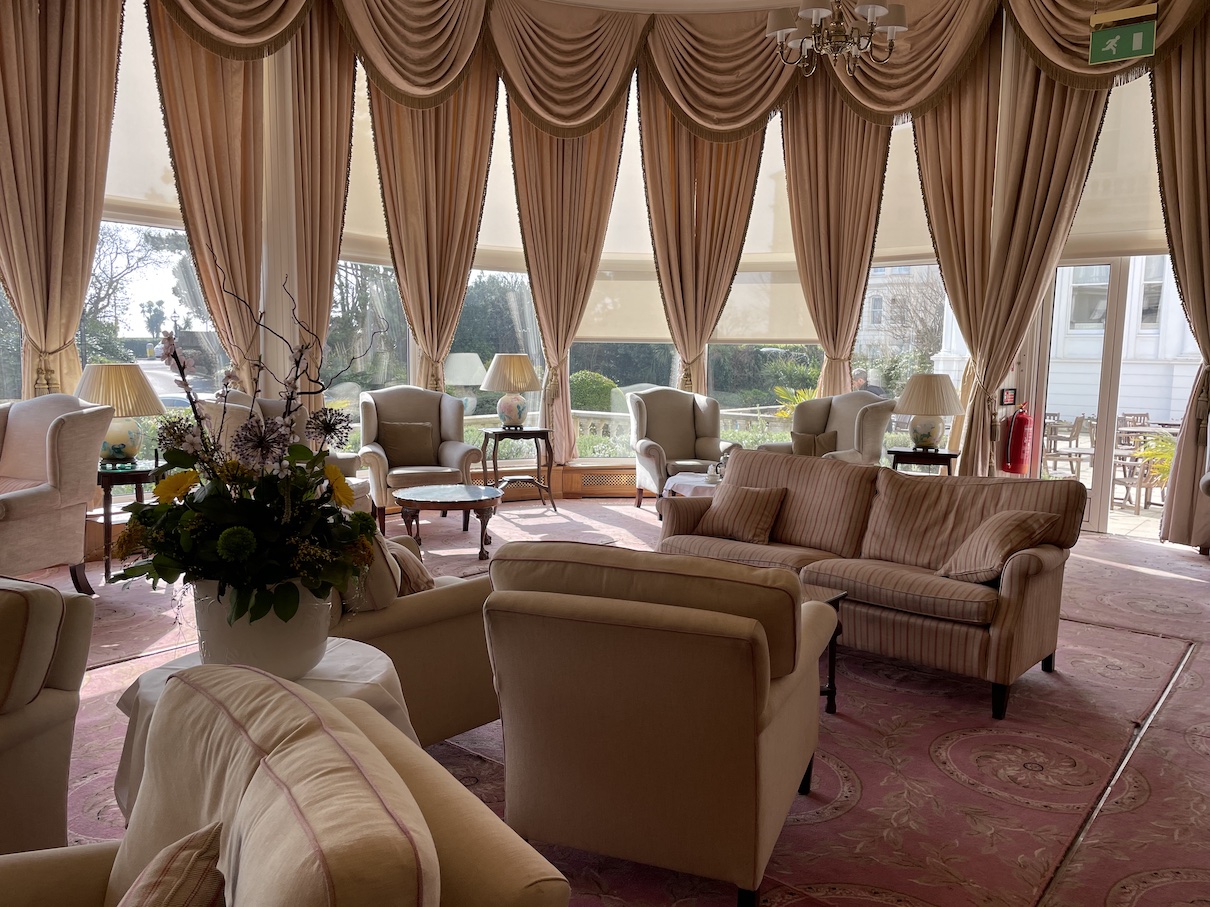 History of The Grand Hotel

The Grand Hotel isn’t a modern, fashionable hotel by any means but a few days here was a glimpse into how seaside holidays used to be for affluent Victorians. Famous names including Winston Churchill, Charlie Chaplin, Arthur Conan Doyle and Debussy all stayed at The Grand Hotel and the Grand  Hotel Orchestra broadcasted live on BBC from the Great Hall every Sunday night from 1924 to 1939.

The hotel closed during the Second World War, later becoming a military headquarters, and was turned into a hotel by the De Vere group who acquired the site in 1965. The Grand Hotel’s current owners, Elite Hotels (which also owns Ashdown Park hotel in East Sussex) bought the hotel in 1998 and have been refurbishing the venue ever since, modernising the amenities while keeping the original atmosphere.

Bedrooms at The Grand Hotel Eastbourne 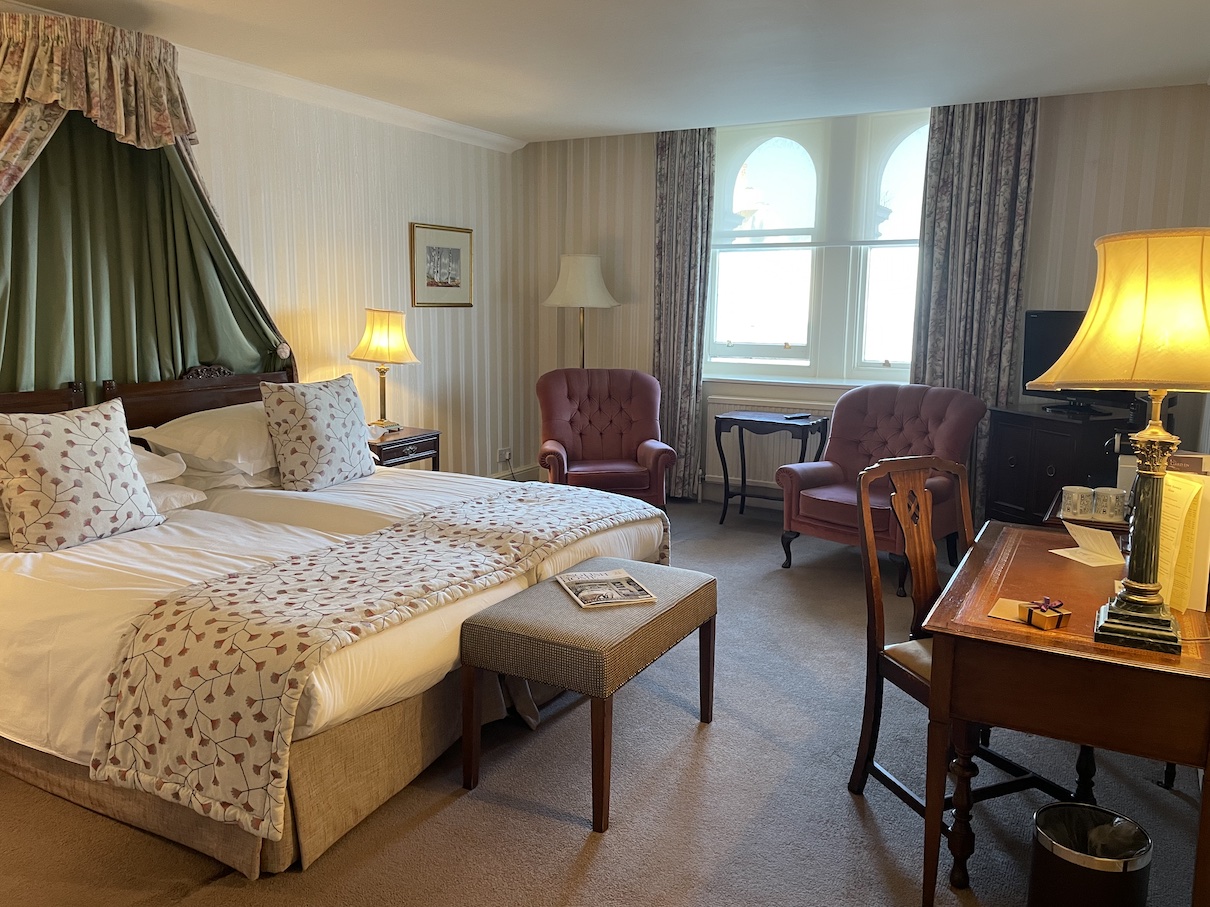 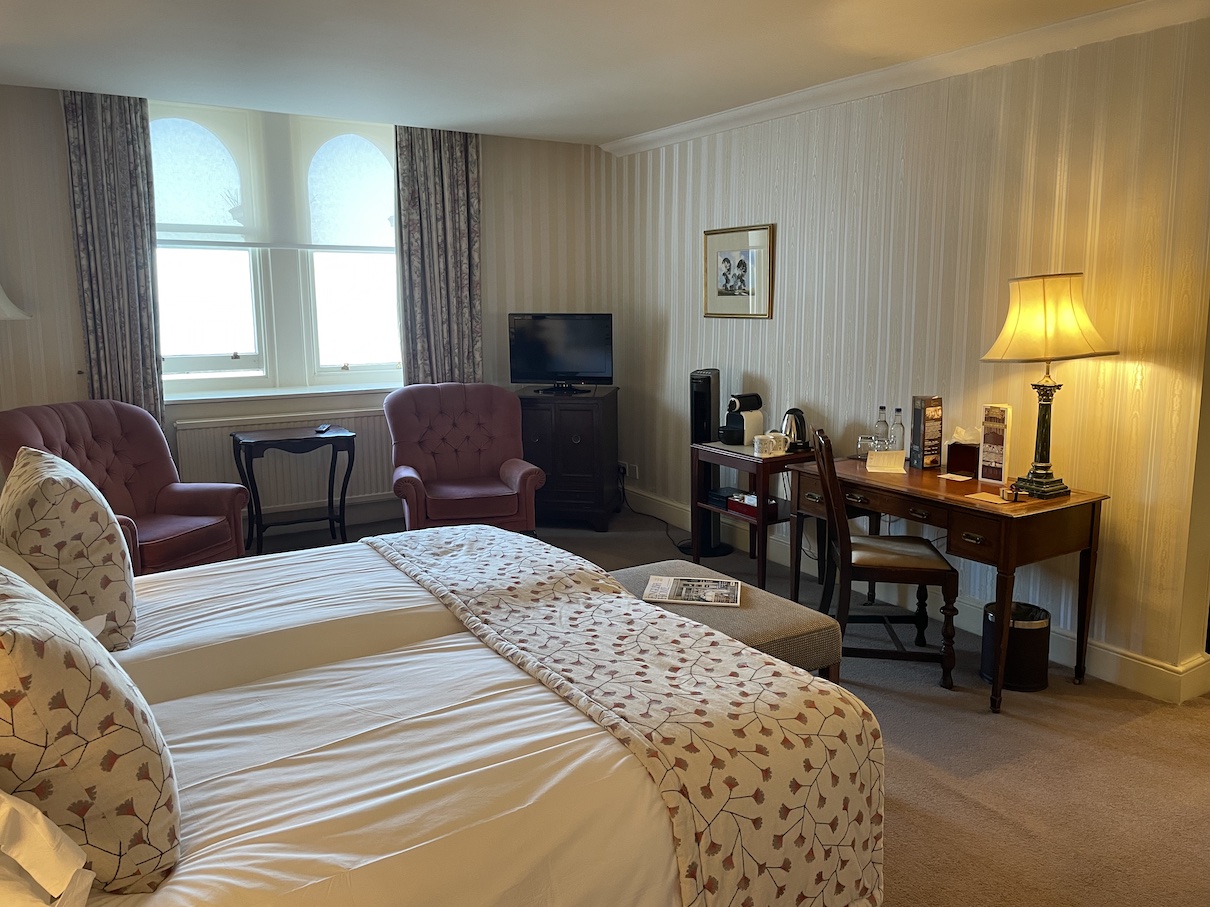 Our bedroom had more than enough space for the two of us. There was also a dressing area, large cupboards and huge bathroom

Traditional wood-lined lifts or wide staircases take you to your room on the upper floors, and no doubt rooms with a seaview command a premium. We were on the fifth floor corner with great views of the sea and the esplanade at Eastbourne, and it was lovely to get that holiday feeling from our window. 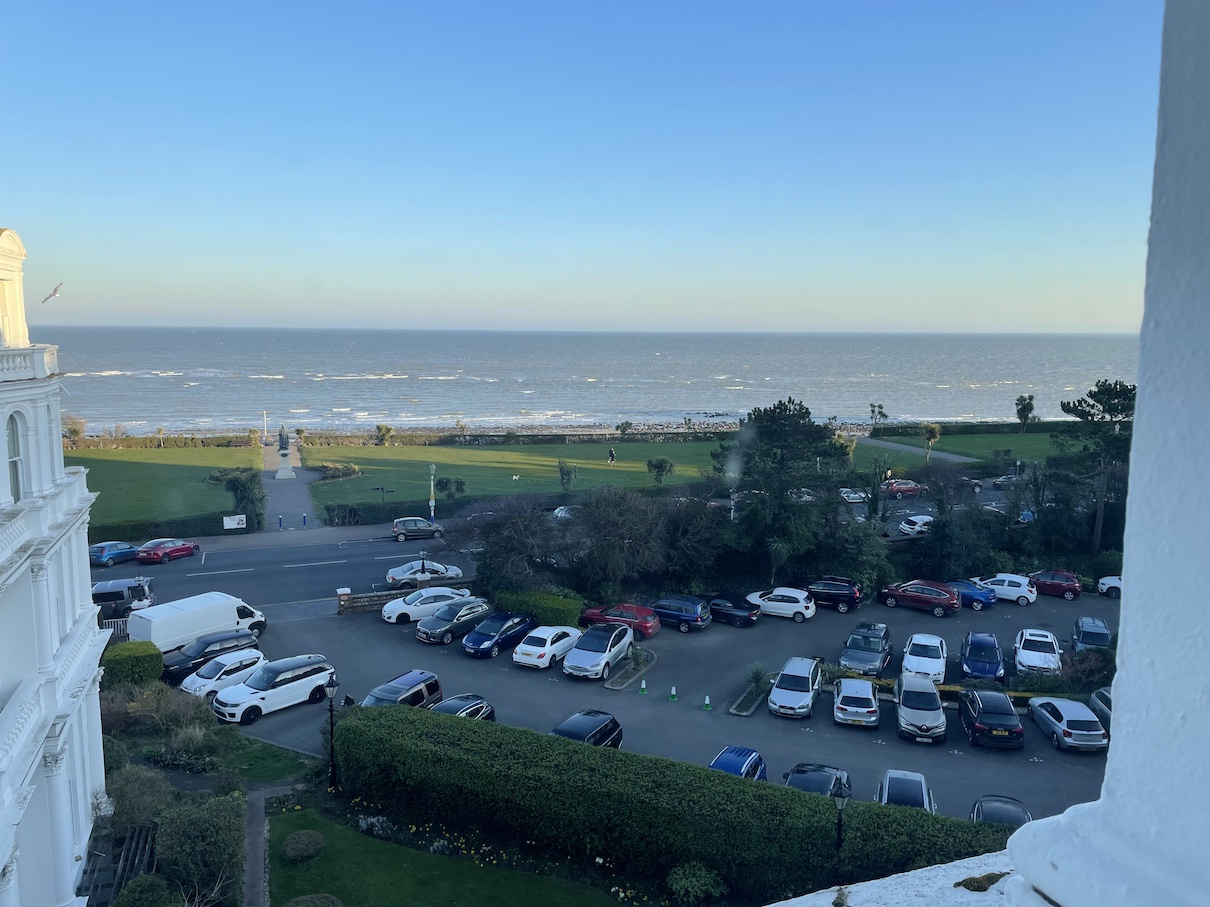 The view from our bedroom window

The room itself, like the rest of the hotel, was built on a grand scale, with lots of room to spread out in. As well as our twin beds (the trip was a birthday treat for my mum) there was a desk, armchairs, tea and coffee-making facilities and, best of all in my mum’s opinion, a separate dressing area where she could keep her clothes and make up.

The bathroom was also large, with a combined shower/bath, two sinks and acres of space. There was ample storage, plug points, lights and mirrors everywhere and the atmosphere was of solid, dependable and traditional luxury. You felt you could hole up in the room for days with a book and be perfectly content.

The spa at The Grand Hotel Eastbourne 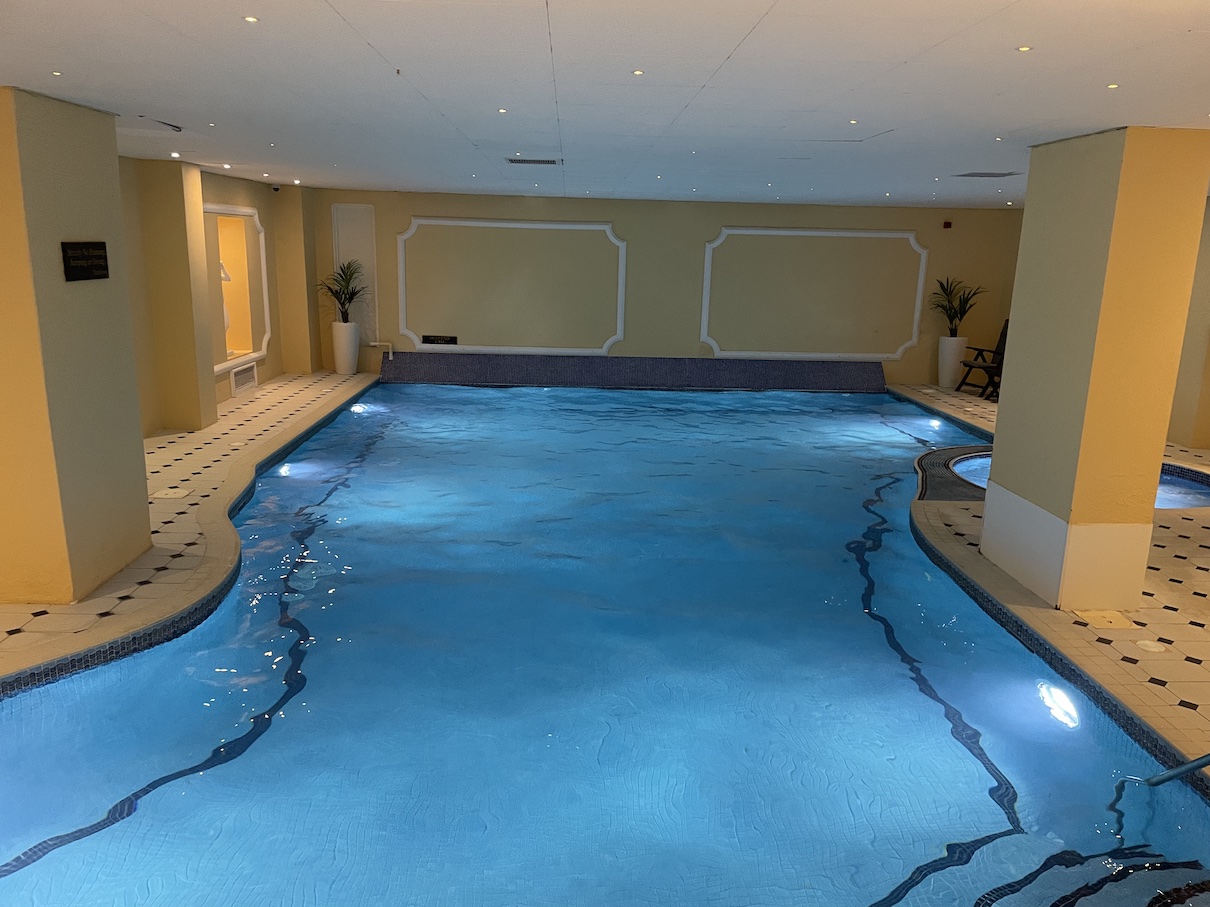 There was an indoor swimming pool at the Grand hotel Eastbourne as well as a gym, hot tub and steam room

Down in the depths of the hotel is a largish-spa centre, with a smart, modern gym, workout space, treatment rooms and best of all, an indoor swimming pool big enough to actually swim in. There’s a hot tub, a sauna and a steam room, so if you don’t really fancy braving the sea for a swim it’s the perfect way to work up an appetite before breakfast or relax before dinner. In the summer months there is also an outdoor pool at the front of the hotel meaning you don’t have to walk more than a few metres to soak up the sun while cooling off.

The Garden Restaurant is the main hotel restaurant where breakfast, lunch and dinner is served daily, but those wanting more of an exclusive fine-dining experience can head to Mirabelle at the far corner of the hotel, which serves modern European food under head chef Micheal Sutherland from Tuesdays to Saturdays. The menu is on the traditional side of things, with starters including Celeriac and Cropwell Stilton soup, Chicken and Wild Garlic Terrine and Line-caught Mackerel, and mains ranging from Braised sticky short rib, lemon sole and salt-baked celeriac – there’s also a gourmet dinner tasting menu for £80 per person with an optional wine flight at £40.

Accompanied by live piano music, we were welcomed with a cured sea trout coriander oil and creme fraiche amuse-bouche which set the fine-dining tone. We then enjoyed the soup and an interesting-sounding 64 Degree Duck Egg York followed by the pan-fried trout with haricot bean fricassee, mussels, chorizo and shellfish sauce which was a great amalgamation of flavours and Roast Creedy Carver duck breast, finishing off with a selection of sorbets. 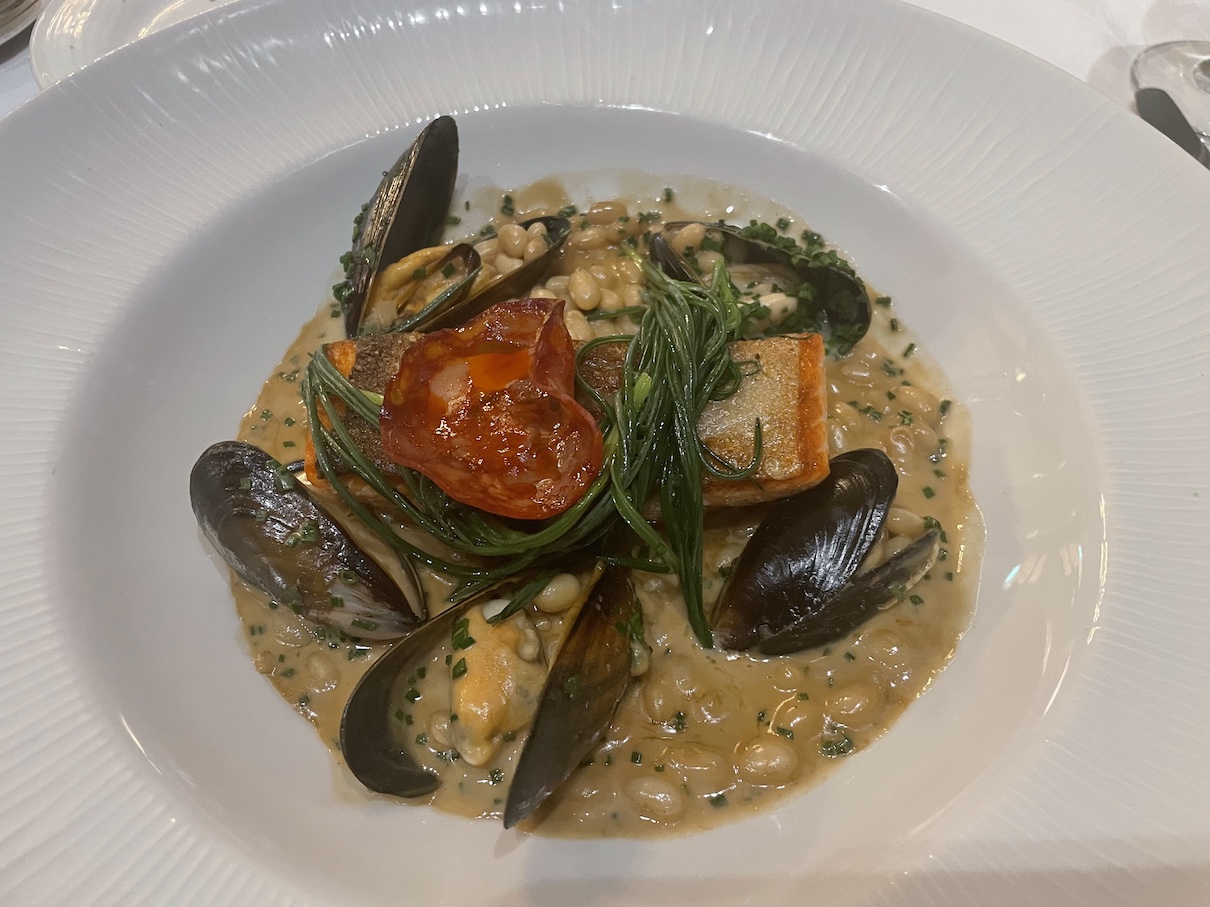 While the Mirabelle is a special-occasion restaurant which you’d probably try only once during your stay, breakfast at the Garden Restaurant soon became a regular treat and while the queue for the buffet was a little slow (thanks to Covid regs still in place at the time) staff coped admirably with dealing with such a large restaurant and the cooked breakfast and coffee couldn’t be faulted. 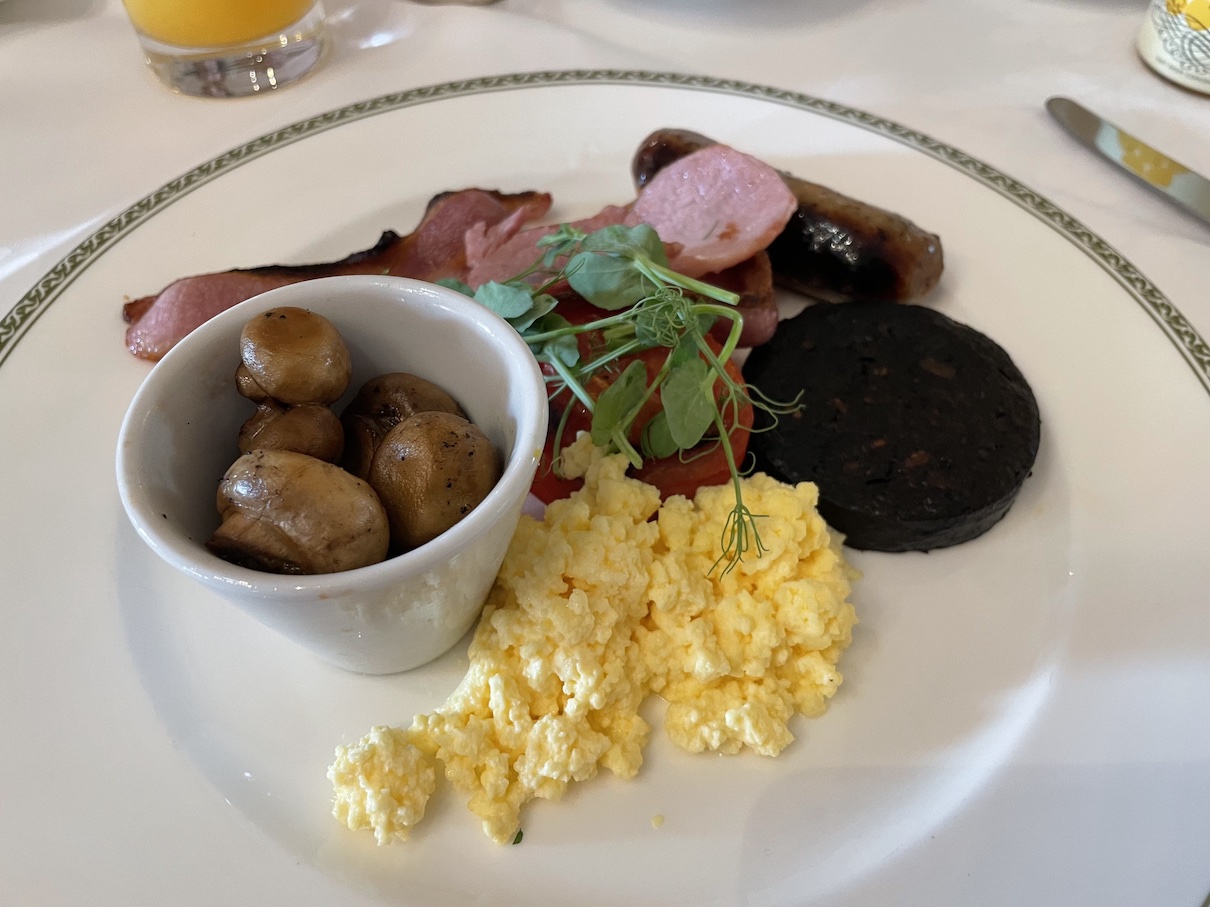 After breakfast we’d always take our second cup of coffee outside into the hallway running along the front of the hotel which is lined by comfy chairs, and soak up the sunshine while planning the rest of the day. 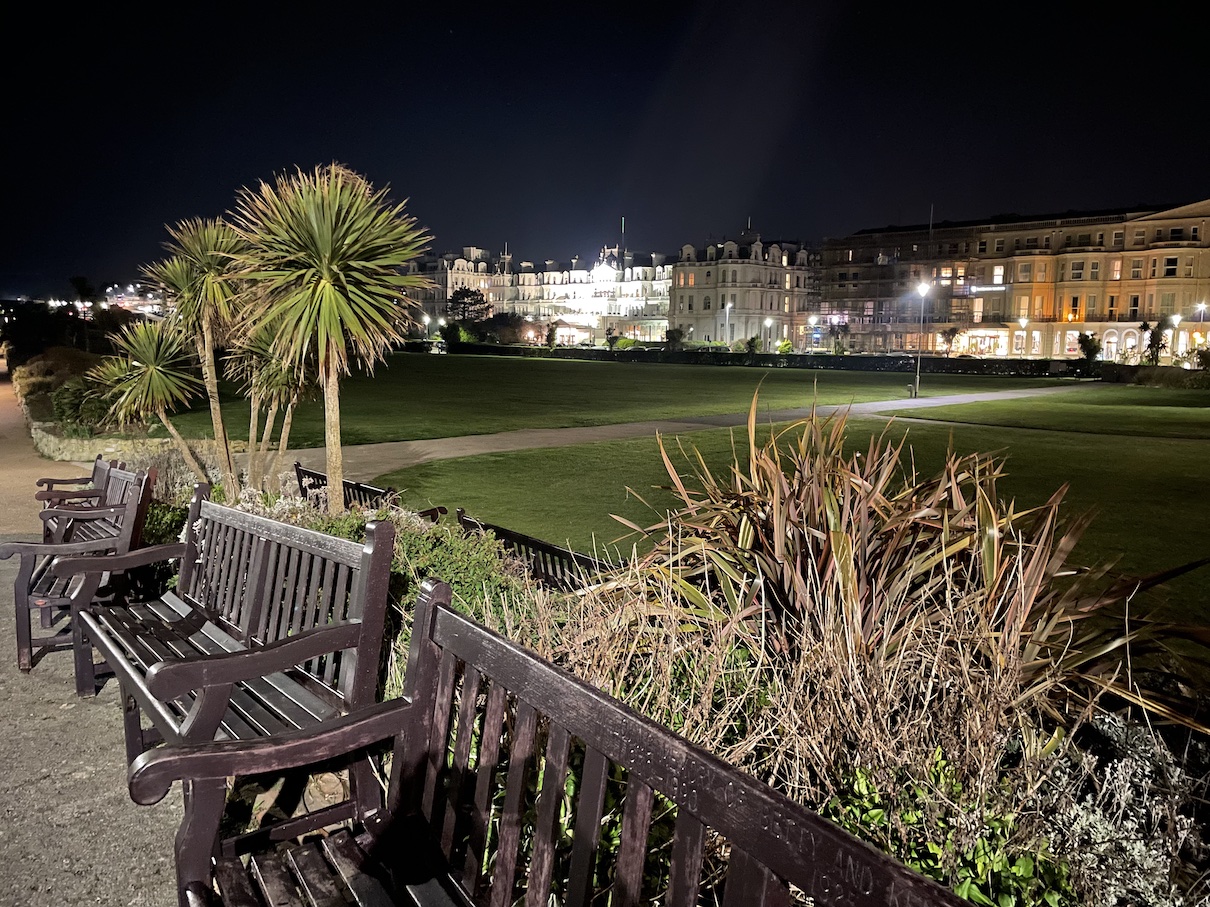 If you’re looking for interesting restaurants in Eastbourne itself, I was recommended to try Cru in Hyde Gardens which looked unremarkable from the outside but was a joy to discover: excellent (and enormous) Sunday roast, top wines by the glass or bottle and friendly staff. We sat at the table by the window soaking up the sunshine along with the wine and were glad to have had the recommendation as I’m not sure we would have found it otherwise. 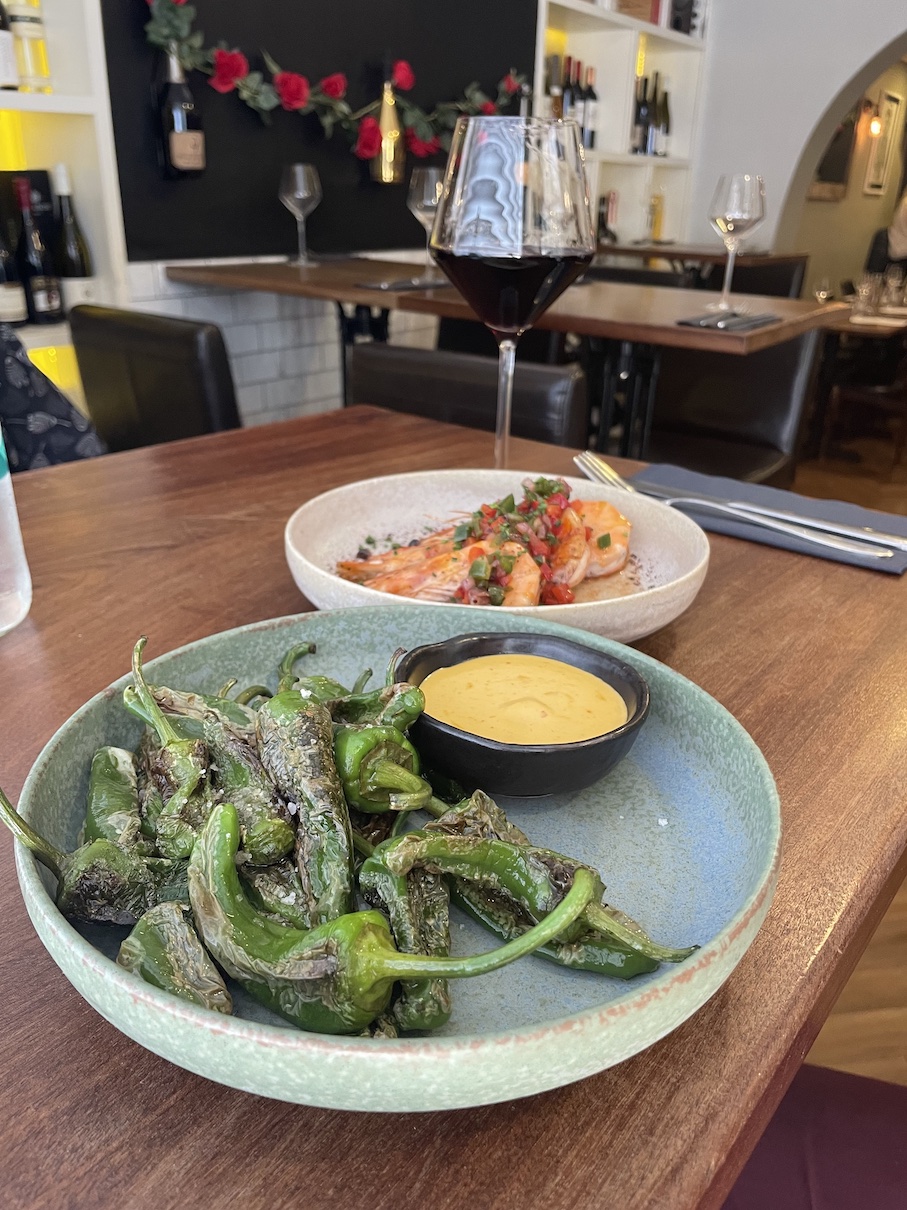 If you fancy venturing further afield, then another great recommendation was the delightfully pretty village of Alfriston just 20 minutes drive away. Not only does it have an impressive church, lovely riverside walks and quirky independent shops to browse in, as well as the first ever National Trust property, The Alfriston Clergy House, but it has The Star pub, hotel and restaurant, part of Hotel Inspector Alex Polizzi’s collection. I’ll do a full review soon but we enjoyed some excellent food in beautiful surroundings and it’s well worth a visit for a meal or to stay. 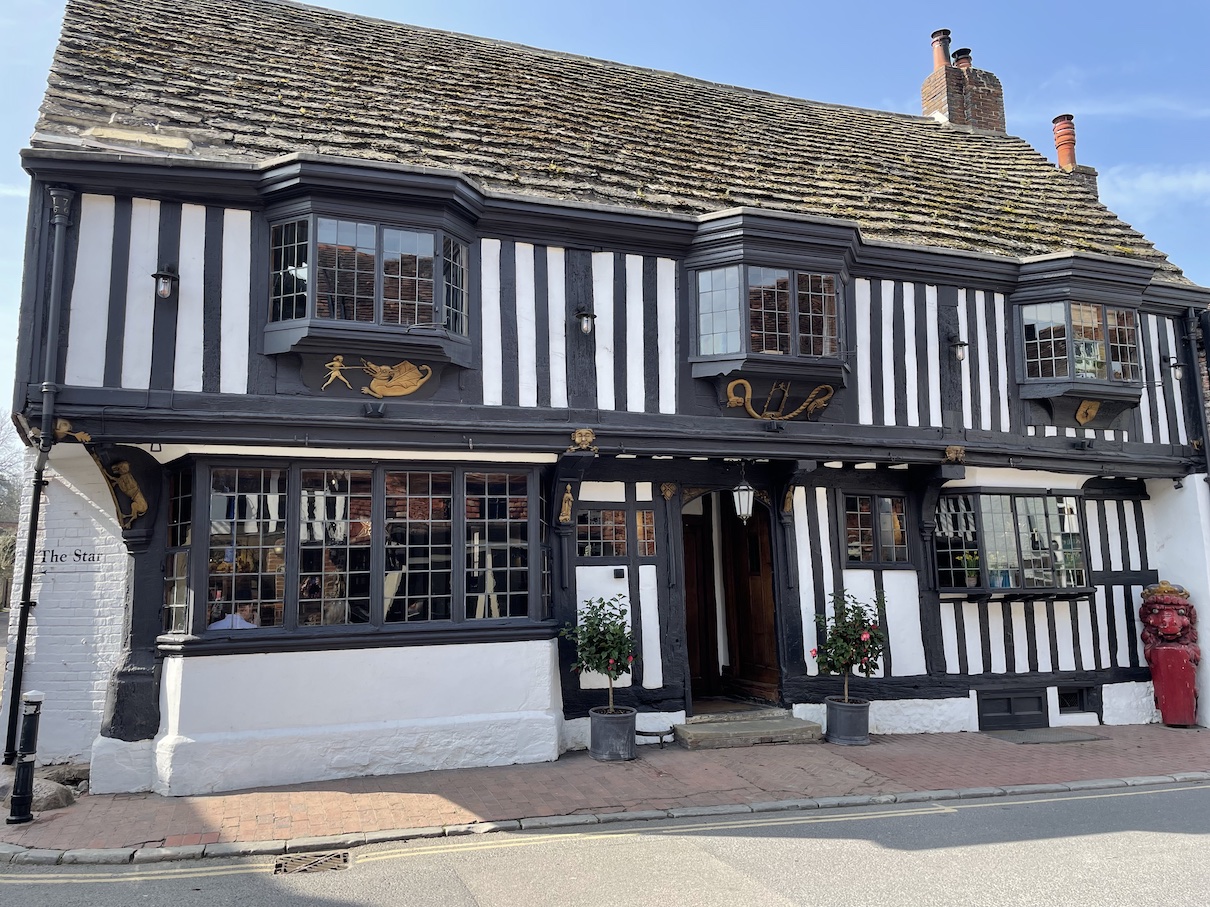 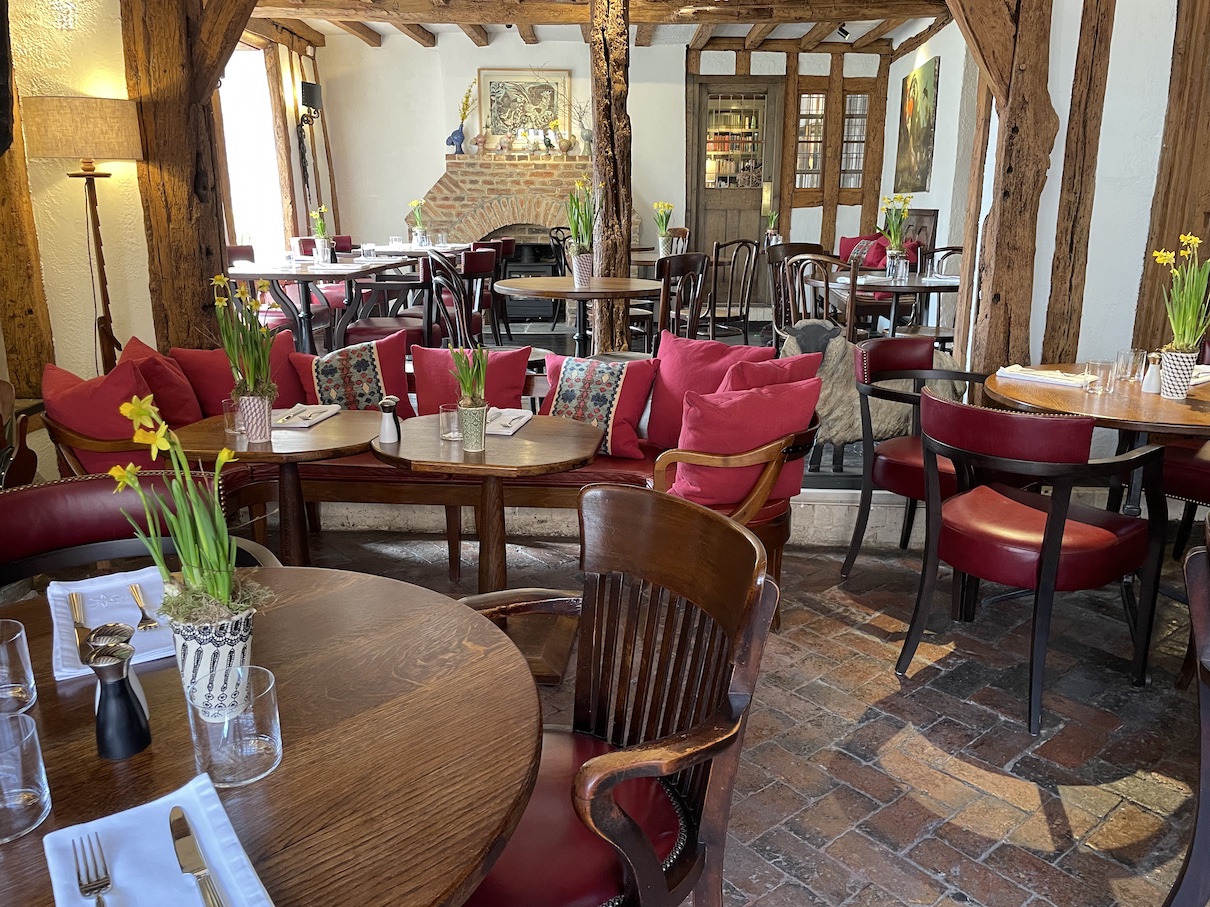 Special offers at The Grand Hotel

Thanks to The Grand Hotel’s owners Elite Hotels putting on a special deal of three nights for the price of two, (check seasonal offers at The Grand for the latest deals) we were able to enjoy four days at the hotel which came to be like a second home for us. If you’re looking for an ultra-modern hotel with chic vibes then The Grand might not be for you, but if you want a relaxing, traditional stay at a classic Victorian hotel then you’re certainly in the right place.

Hotel information and how to book The Grand Hotel Eastbourne

If you’re interested in reviews of seaside hotels then check out: Cornish spa delight at Mullion Cove hotel, near Lizard Point; A romantic seaside stay at Cary Arms hotel and spa, south Devon; Two luxury B&Bs in the Isle of Wight; A seaside stay on the Suffolk coast at The Brudenell; Good taste everywhere from Adnams at The Swan, Southwold;

If you like hotels with swimming pools then you’ve love reading these reviews of luxury hotels: A perfect Sunday roast and stay at Feversham Arms hotel, North Yorkshire; A Surrey spa stay at South Lodge hotel, Horsham; A spa hotel fit for the England rugby team at Pennyhill Park hotel, Surrey 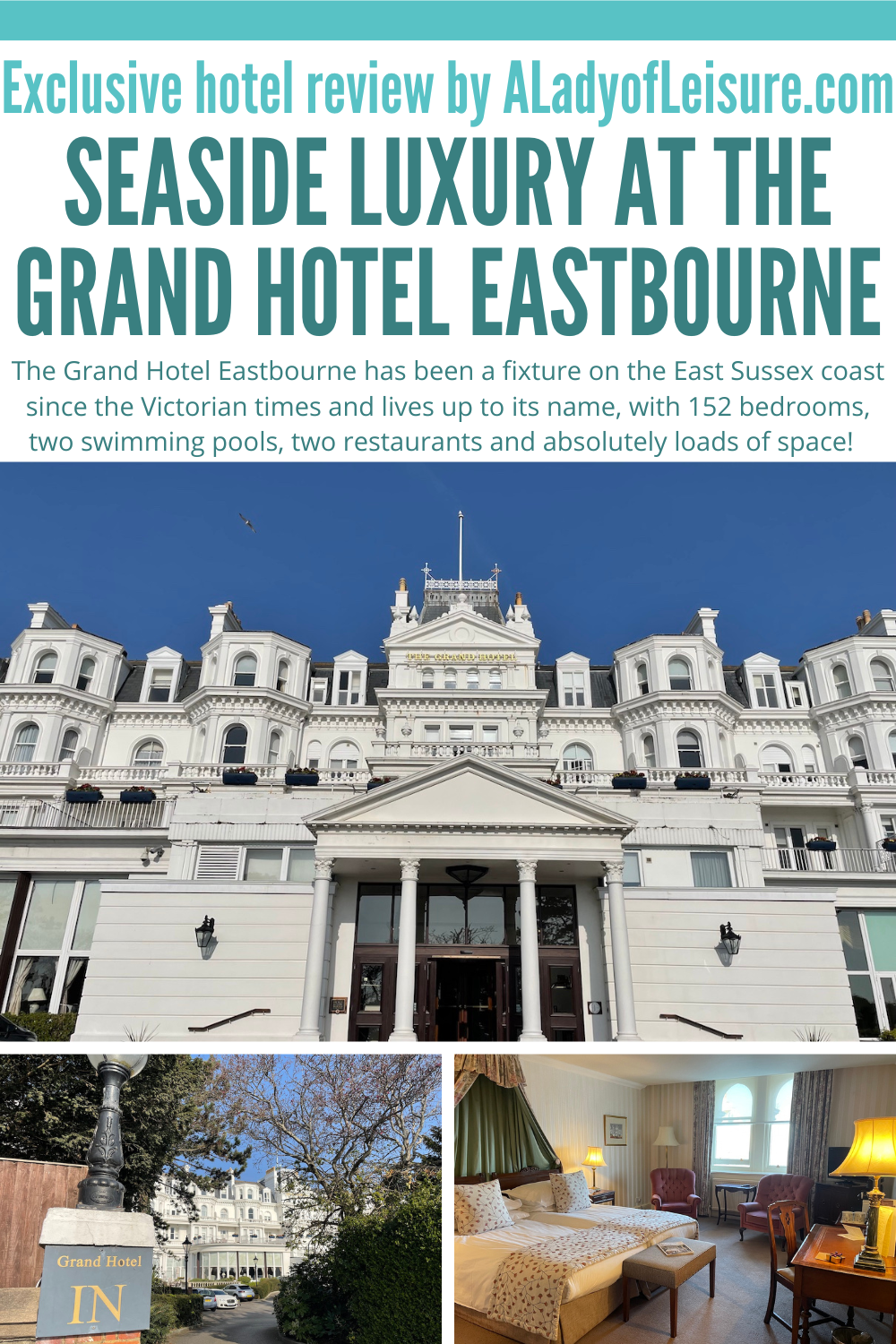