The first time I visited Burley Manor Hotel in the New Forest I had absolutely no expectations – not because I thought it was going to be terrible, but because it had never even crossed my radar before. It turned out there was a reason for this: while the original building dates back to 1852 and has been a hotel since 1935, Burley Manor has had a succession of owners over the last decade which doesn’t usually help a hotel build up a solid reputation. 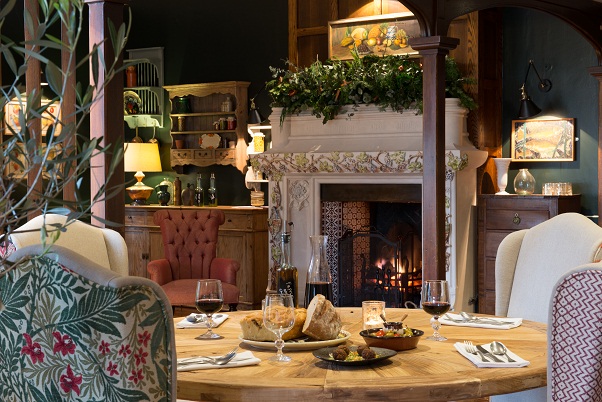 Burley Manor was recently refurbished at a cost of £1.8 million by its new owners

Thankfully for Burley Manor, it is now under steadier ownership. Bought by New Forest Hotels in April 2015, it promptly underwent a £1.8 million refurbishment and reopened with a whole new look, styling itself as a ‘brand new, yet very old, restaurant with boutique rooms.’

I’ve now stayed at the hotel twice and both times had a really pleasant stay – excellent staff, food and luxury bedrooms with Hypnos beds – and the second stay I felt the hotel was relaxing into its own personality, which is that of a grand country house but with a fun, informal air (indeed, since my stay it has rebranded itself as more of a ‘restaurant and rooms’). 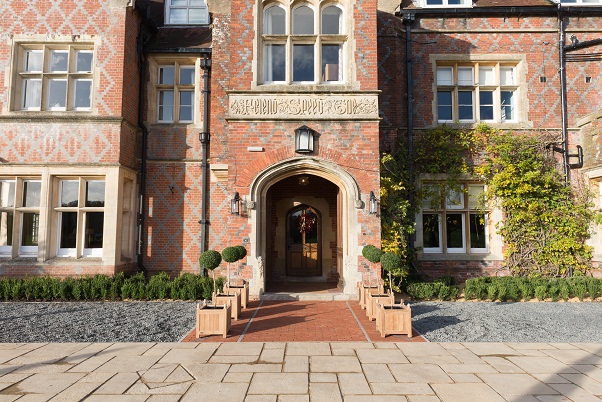 Aimed at adults – children over 13 are allowed though – I was pleased to see that the hotel retained many of its traditional features, such as the open fire in the entrance hall, the 164-year old carved wooden staircase and the ornate lettering round the front of the brick building: ‘Welcome the coming friend; speed the parting guest.’ There was no chance of us speeding on our way, though: we lingered so long over breakfast the next morning that it was half past eleven before we reluctantly left the pleasant dining room conservatory to pack up and check out. 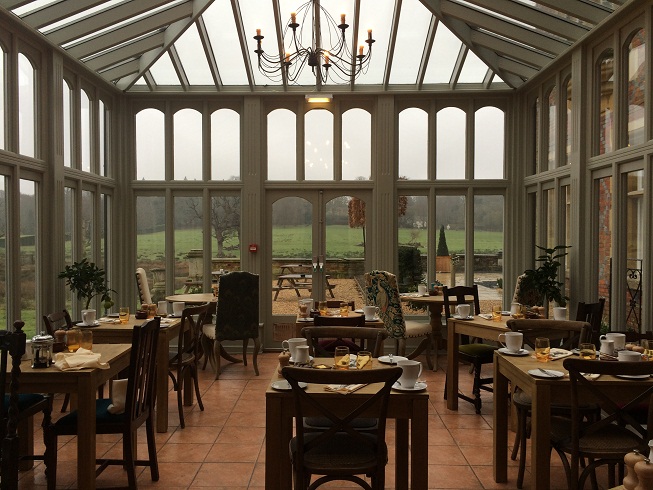 The hotel is set in just eight acres of land but it looks like much more as right in front is the green expanse of Burley Park, a red deer sanctuary. There are 40 rooms ranging from Snug to Suite, with around two-thirds in the main building, The rest are in the more modern Garden Wing and connect to the main hotel by a corridor which takes you past the treatment rooms (I had a lovely massage during my stay) but you can also walk across the grounds to enter by your very own private decking. 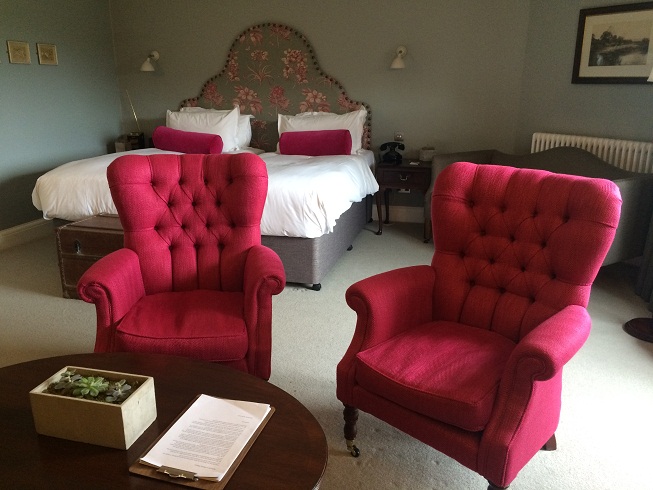 Our room – one of the suites in the Garden Wing

We stayed in one of the suites in the Garden Wing which was large enough to have a chaise-longue, two comfy chairs and separate lounge area, although the bathroom by contrast was surprisingly small, although very smart with immaculate black and white tiles and splashes of pink to reflect the colour theme of the bedroom. There were Temple Spa products in the bathroom, freshly-baked cookies in the bedroom, no fridge but there were tea and coffee-making facilities and fresh milk was offered when we were shown to our room, a good-sized wardrobe and a big flatscreen TV. 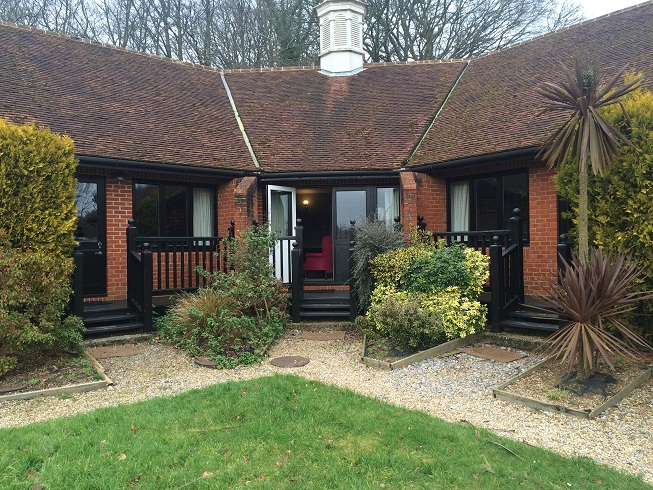 Our little patch of private decking

In spite of the rain we ventured out into the garden – there are plans to install a swimming pool there – into the village of Burley. While it was nice to blow away the cobwebs, Burley was a really odd place. The few shops on the High Street were practically junk shops, full to bursting with all sorts of clutter ranging from so-called spiritual trinkets such as mood rings and sharks teeth, to ‘sexy witches’, golliwog dolls, occult books and incense sticks. Apparently a ‘self-confessed witch’ – is there any other kind? – called Sybil Leek lived in Burley in the 1950s, hence the witchy theme. We had a half of local ale from one of the two pubs in town and fled back to the sanctuary of Burley Manor.

Dinner was a memorable occasion. Burley Manor is obviously targeting the foodie crowd and it was suitably high-quality, designed by executive chef James Forman, inspired by the Slow Food movement and with a Mediterranean influence. The menu is vast and as well as starters and mains contains sections entitled Tapas, and Forest and Coast, as well as a great selection of hearty sharing dishes, such as whole roast rack of lamb, chateaubriand, roast belly of pork and Cypriot-style split chicken. We began with the pan-fried squid and the ‘day-boat west coast fish, Marseille-style’ which we had to ask the helpful waitress Caroline to explain (‘bouillabaisse’ she said) – it was a deliciously rich gloopy-soup with an array of seafood including mussels and prawns. 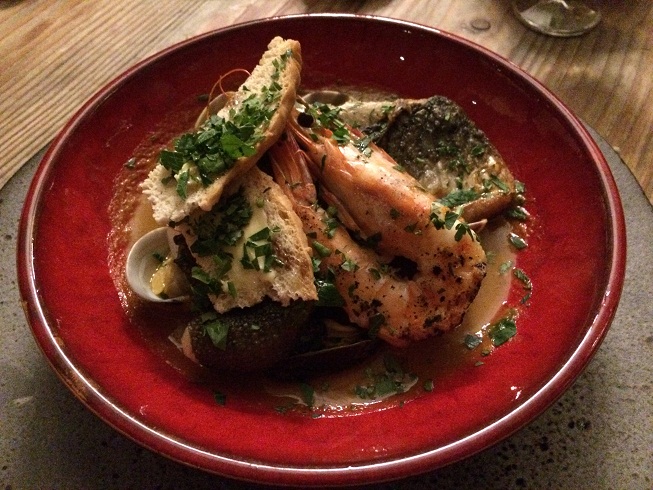 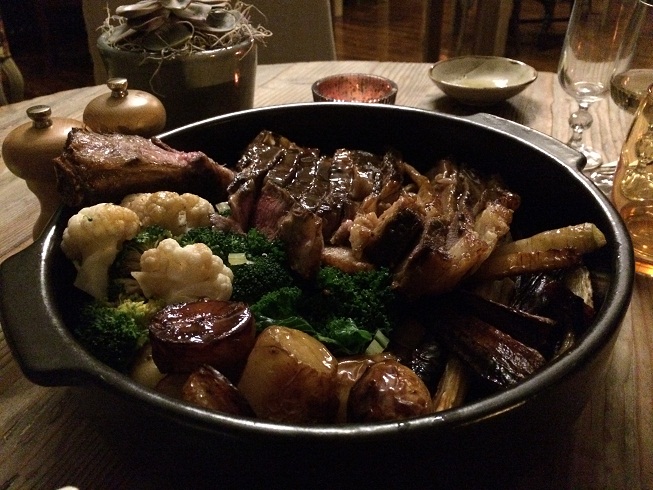 The highlight of the meal had to be ‘wood-roasted forerib of beef’ which came in a massive pot, carved off the bone and beautifully cooked, one side pink, the other darker and topped with glistening fat. It came with vegetables and roast potatoes in the same pot and was the choice of every one of the four tables dining that night.

If the meat was the culinary highlight then the excellent sommelier  made sure that the wine was more than up to the task. We started with a couple of very nice glasses of fizz from the nearby Hattingley Valley, and Carlos suggested a Pinot Gris with the starter. The beef was accompanied by a really classy St Emilion, and then a couple of glasses of Sauternes saw us on our happy way. This might sound like a lot of wine but all the wine comes in beautifully dainty 250ml carafes so you can try a lot without having to commit to a bottle – and it is all very reasonably-priced too, with the St Emilion at the pricier end and still only £42 a bottle or £14 a carafe, and well worth it. 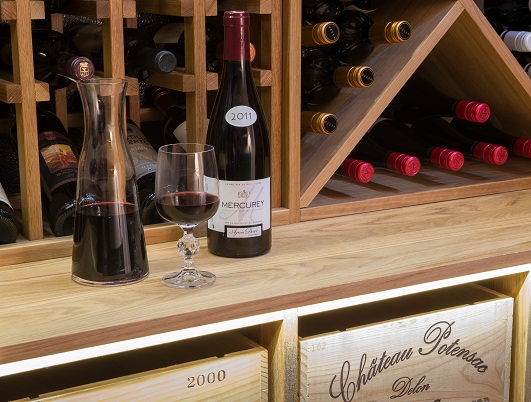 The desserts didn’t quite achieve such lofty heights as the main course – the roasted plums with orange yoghurt and amaretto zabaglione were nice but the rice pudding would have been much better without the various seeds and bits of coconut. Feeling very full we bid a fond farewell to the restaurant and slept like logs in our Garden Suite. 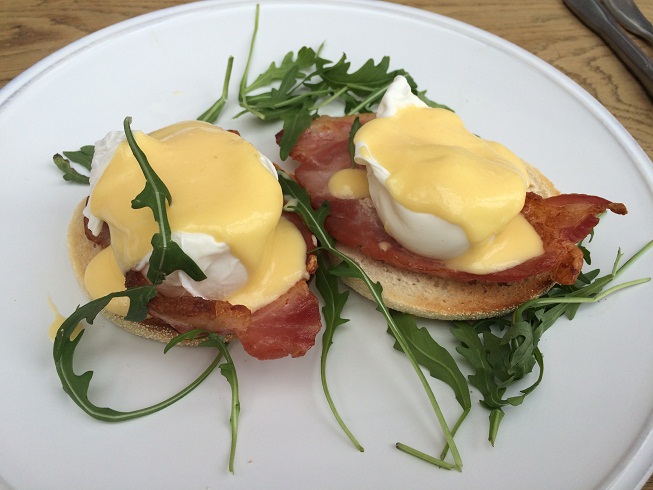 Breakfast in the light and airy conservatory was excellent and much improved on my previous visit. There was a whole range of buffet and cooked options, the Eggs Benedict was pronounced very good by someone who eats nothing but Eggs Benedict for breakfast, the coffee was excellent, and no-one minded us lingering over the papers and several refills until it was nearly midday. 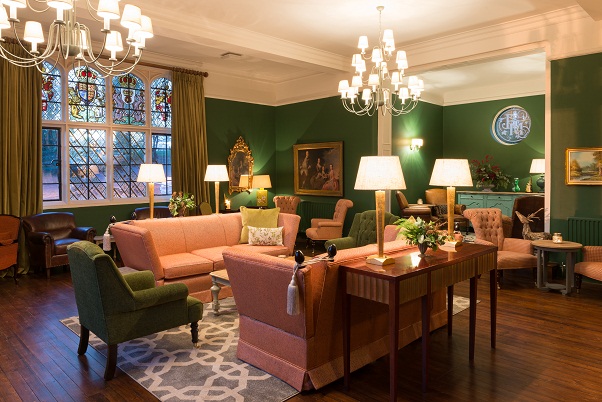 The lounge at the front of the hotel 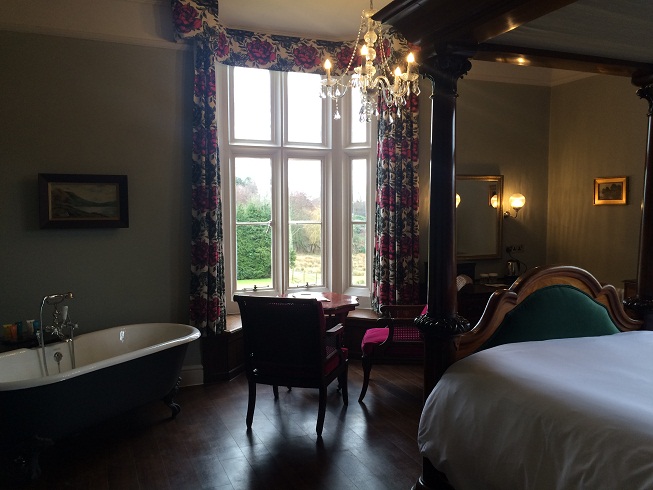 There’s a bed, there’s a bath… the Bridal suite at the Burley Manor, which recently launched its barn conversion wedding venue

It was time just for a quick look around some of the rooms in the main building which were also very nicely appointed, with great views of the deer park. The Snug rooms were made to feel bigger with high ceilings and massive windows. The Bridal Suite at Burley Manor had a four-poster bed and the window seat, plus a roll-top bath at the end of the bed, and gets rave reviews in the visitors’ book along with all other aspects of the hotel. 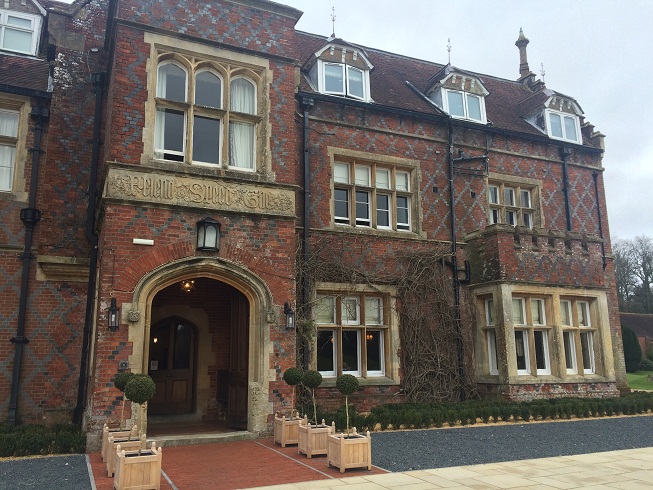 Editors note: This review was originally posted in 2016 but updated in 2017 after my second stay and every year to keep it fresh, accurate and relevant.