Lainston House hotel is the perfect place to stay if you’re visiting Winchester, but it would be easy to just stay put and make the most of everything the hotel has to offer.

Not only are there luxury bedrooms in which to relax, there’s also a cookery school, a kitchen garden, sweeping lawns, a terrace for afternoon tea, a bar, restaurant, tennis courts and lovely grounds for a bracing country walk.

I was determined to get the most out of my stay and arrived at an unheard-of midday at the hotel, which is just four miles from Winchester. The hotel itself is reached via a lovely sweeping drive meandering through the grounds and in the autumn sunshine the multi-coloured leaves looked superb, with the hotel building itself glimpsed tantalizingly through the trees. 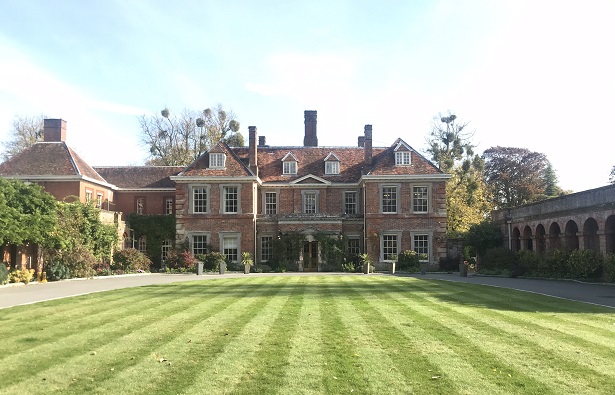 The entrance to Lainston House

The front of the hotel is reached by driving round an immaculately-mown lawn to the front door where you can briefly hover to drop your bags off, and it’s a mark of the hotel’s attention to detail that when I parked in the main car park after doing just that, I thought ‘what a nice car park’ which is not something I say often, if ever. The car park, with electric charging points, is also in a circular shape with a relaxing Sundial Garden in the middle and signs to the large kitchen garden where many vegetables and herbs are grown for the kitchen.

The grounds at Lainston House hotel

To make the most of the unexpectedly warm weather – and because I was way too early to check in – I headed through the hotel to its terrace at the rear of the hotel which has stunning views all the way down the avenue lined with lime trees – a mile of them to be exact. Planted around 1716 as a 19th century ‘gentlemen’s vista’ rather than as an entrance way, the avenue is the longest line of limes in England. 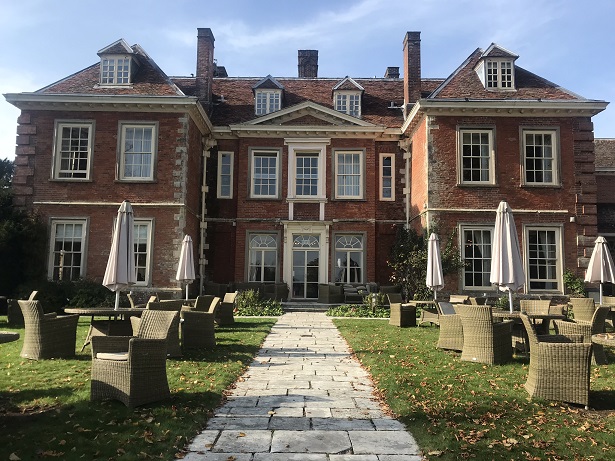 The terrace at the back of Lainston House – perfect for an al fresco coffee, drink or afternoon tea

There’s a helipad and some fairly rough and ready tennis courts and is a ideal place to enjoy a drink or two. Weather-permitting, the hotel can arrange everything from archery and clay-pigeon shooting to duck herding, croquet and picnic baskets and has bikes guests can borrow to explore the surrounding countryside. 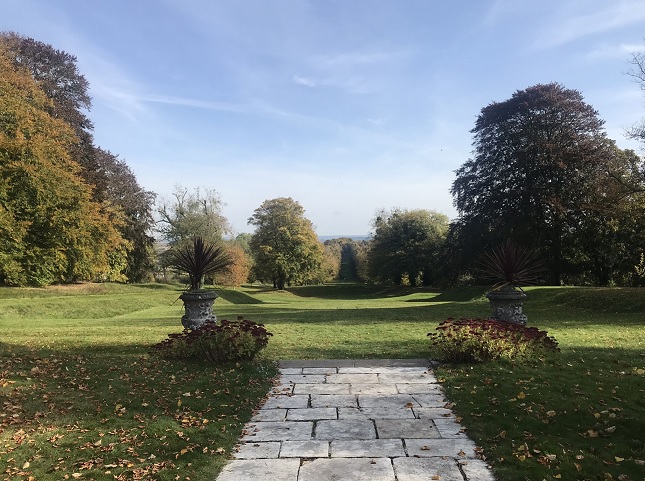 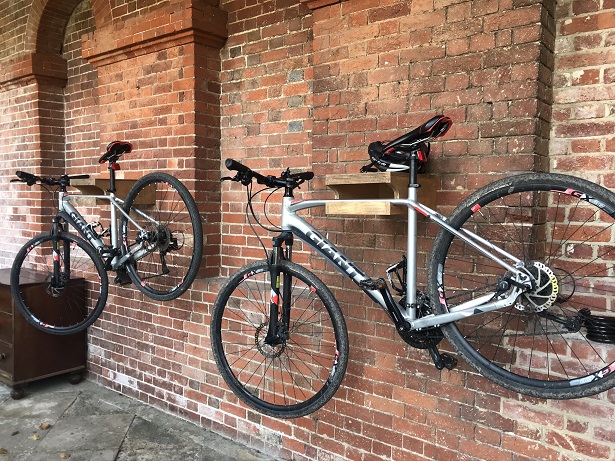 After enjoying a coffee in the sunshine, Lainston’s sales manager Emily arrived to give me and my guest a tour of the hotel and I was surprised to find out how vast it was. The main part of the hotel itself, which dates from the 17th century, feels fairly compact – there’s an entrance hall, a bar, a couple of rooms for dining and that’s about it, but over the years various extensions, all done in keeping with the main design of the hotel, mean that there are 50 bedrooms (nine in the oldest part of the hotel), conference facilities, a charming inside/outside loggia, a chef’s table set-up in the kitchen, endless corridors leading to more rooms and wedding facilities. 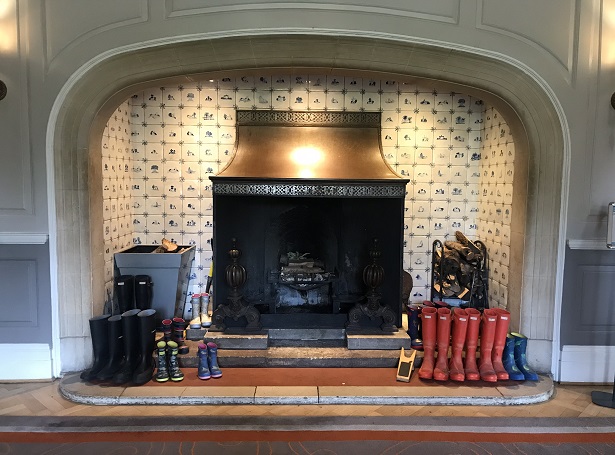 The fire place and wellington boots in the entrance hall. In winter the fires are lit giving Lainston House a lovely real fire warmth

The bedroom at Lainston House hotel

Our bedroom at Lainston House are vast. At one end was a huge desk – perfect for working from home – and at the other was a massive bathroom, with underfloor heating, a roll-top bath, two sinks and separate shower. In between was a lounge area with comfy chairs around a coffee table, two Queen-sized beds, a TV, coffee machine and basically everything you need from a month or two of hotel life. 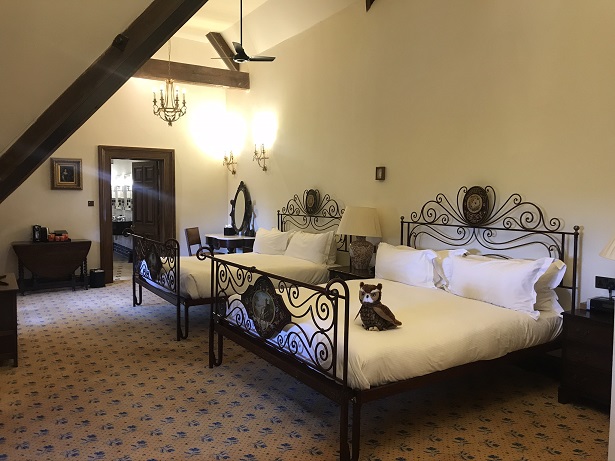 This is only half of our bedroom at Lainston House – the two Queen-sized beds being watched over by the room owl. In the other half was a desk, chairs, coffee table, wardrobe and acres more carpet

There were even Downton Abbey-style bells in the bathroom which jangled when someone rang the doorbell. Given that the only other hotel bedrooms I’ve stayed in before with massive twin beds were Lainston House’s sister hotel South Lodge in Surrey, and the Bellagio in Las Vegas, two excellent hotels, this boded well. 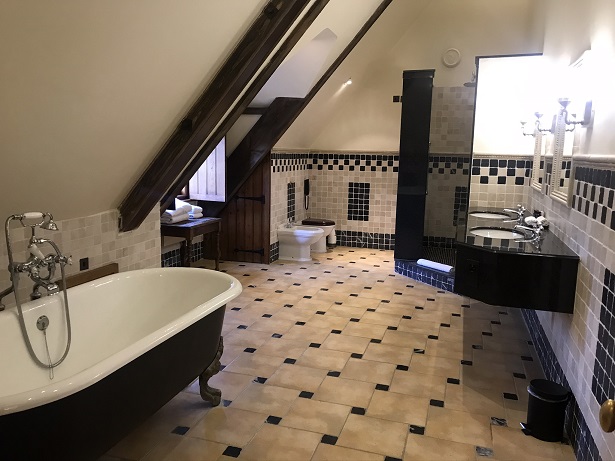 The huge en-suite bathroom at the Spurwing room in Lainston House. As well as the roll-top bath and rainfall shower there were twin sinks and underfloor heating

There are more buildings tucked away in the grounds too: another separate conference facility, an impressive old dovecote, the ruin of a 12th century chapel, the kitchen gardens and a stunning, newly refurbished Season cookery school. Between lockdowns Lainston House hotel has been able to host several cookery courses. The workstations are well spaced out for social distancing, and while the equipment is all brand new and gleaming, there are still some well-preserved historical features including the wooden barn rafters, a donkey wheel and a terrifyingly (for those with no head for heights) deep well which you can walk across it thanks to its reinforced glass cover (my palms are sweating just thinking about it, but I did walk across it – twice!). 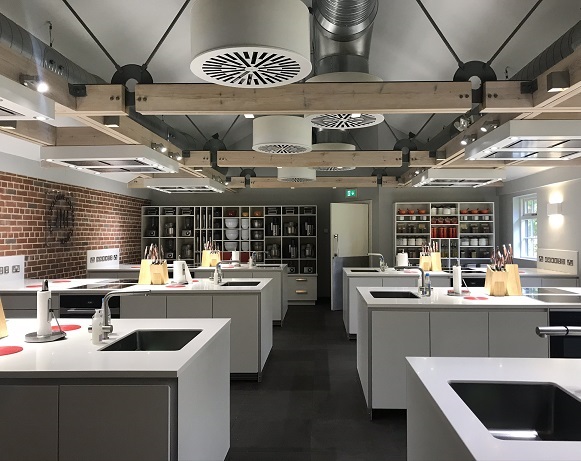 The Lainston House hotel’s cookery school Season was newly refurbished in the first lockdown and offers a variety of classes, perfect for social distancing 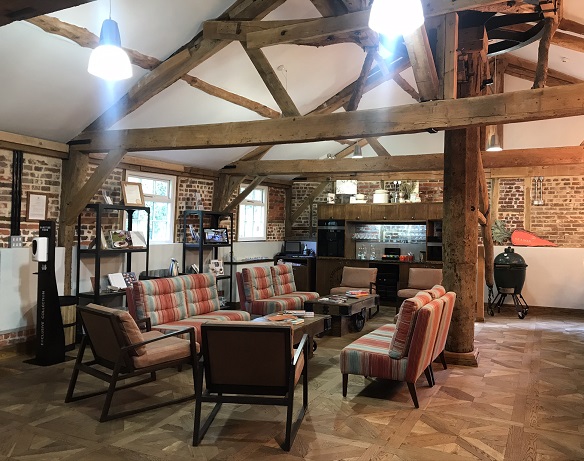 The cookery school is in an Grade II-listed well barn and as well as indoor classes, courses are also taught outdoors in the kitchen garden

After all that excitement it was time to find our room and once we’d marched along the endless corridors and up several flights of stairs, we arrived at Spurwing, our bedroom for the night. This was definitely the highlight of the stay: the family junior suite room with its super-high ceilings felt so relaxing and roomy that I could have happily stayed there for the next 24 hours.

However that did seem a bit of a shame with the countryside and nearby Winchester to explore, so we headed off for a spot of shopping and a look at the impressive Winchester cathedral  – to go in costs £9.95 per person and we weren’t planning to spend that long there but the cathedral shop was definitely worth a visit. 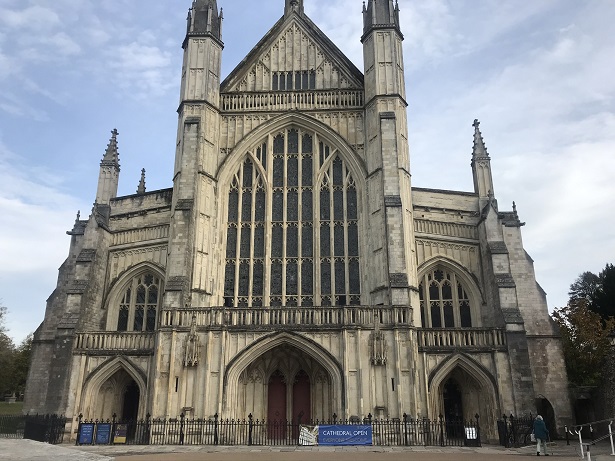 The impressive Winchester cathedral is one of the largest in Europe 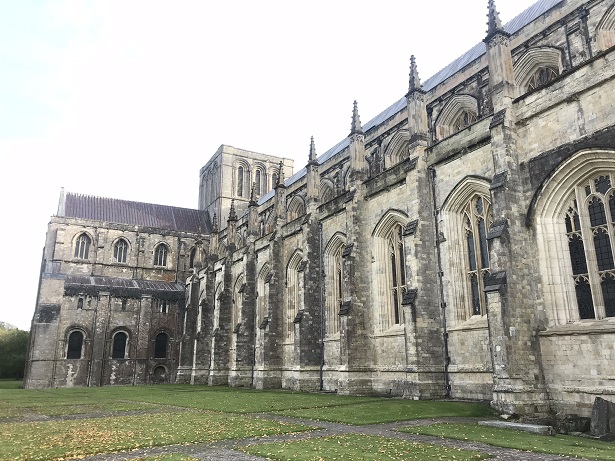 Parts of the cathedral are almost 1000 years old

Settling in at Lainston House hotel

Back at Lainston House – or ‘home’ as we were starting to call it, it’s amazing how quickly you can settle in – we headed back to our bedroom in ‘the fishing suite’, named due to the fish-themed wallpaper in that part of the hotel, for a G&T and to try out the coffee machine before changing for dinner in the hotel’s 3 AA star restaurant. There are two rooms, one brighter and less formal than the other, and they sensibly put the early diners in together rather than spreading everyone out which made for a nice atmosphere. In summer the views from the restaurant over the terrace and the lime-tree-lined lawn would be gorgeous and I did think some solar-powered uplighters would show off the grounds beautifully in the darker months. 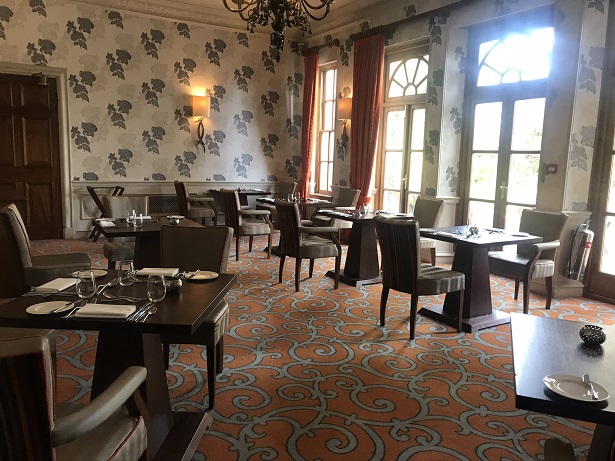 One of the dining rooms at Lainston House. The other is slightly more formal, with wooden panelling

The restaurant at Lainston House hotel

It was a pleasant novelty being in a restaurant for a change and while the service was a little erratic – we had to ask several times for bread, there was a fair amount of doubling up on taking orders and so on – the waiting staff were friendly and of course things are a little different in Covid times. The menu options were surprisingly esoteric: I was expecting traditional English fare but the menu was something else: starters included ‘Pressed rabbit, trumpet, hazelnut, maple, pear’ and ‘Celeriac, gruyere, shitake, white chocolate, honey, truffle’ while the main were similarly listed: ‘Venison loin, red cabbage, Jerusalem artichoke, cep, quince’ and ‘Hake, butternut, abalone, mussel, verbena’. 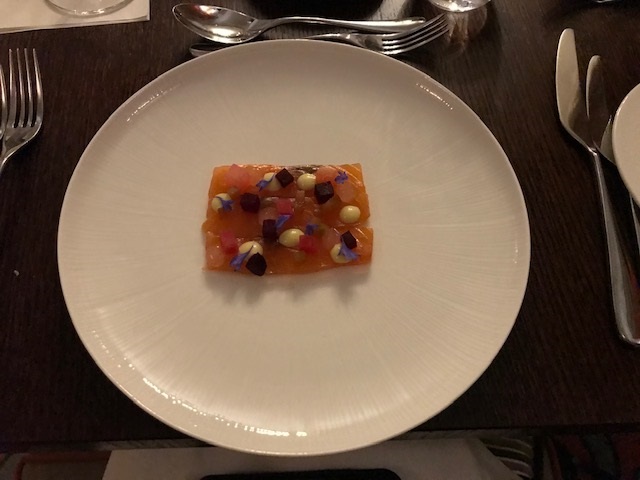 My salmon starter was beautifully presented and while small, it was full of flavour

There was also an £80 six-course tasting menu available which was a selection of the a la carte menu courses, but we didn’t feel short-changed as there were a few extra dishes thrown in such as an amuse bouche of mango chutney, curried parsnip and yuzo. My gin-cured salmon starter with beetroot, wasabi and cucumber was an Instagrammer’s delight (and was full of flavour) while my roasted halibut main course with crab bisque was warming and hearty if a little light on the bisque and could have been warmer. 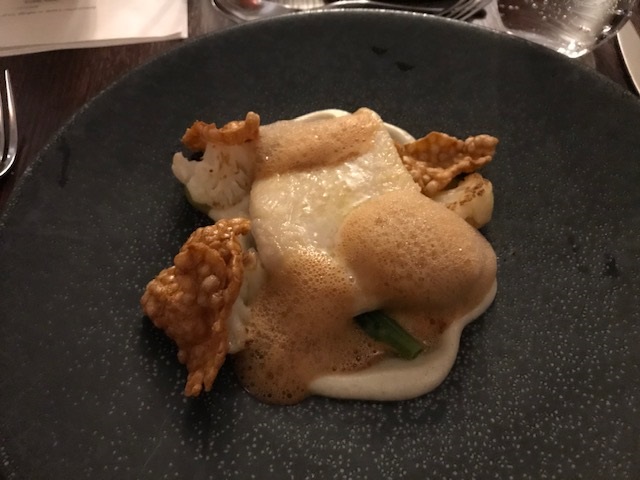 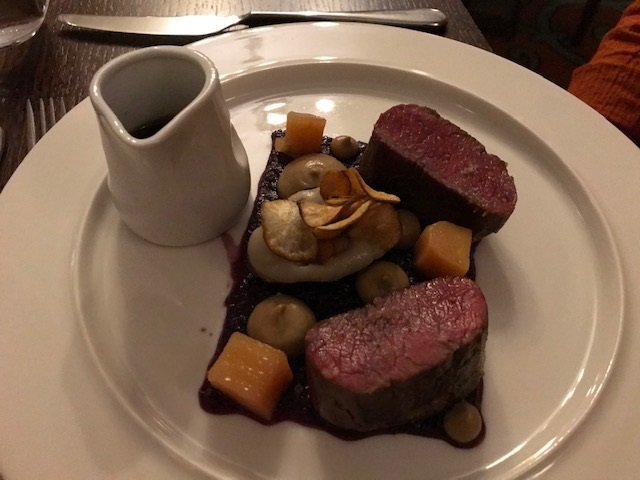 We thought it would be rude not to try the desserts, especially when they were enthusiastically recommended by the waitress, so we went for a pear souffle – which could have done with more pear taste – and the chocolate and orange choux, which was totally indulgent and not the kind of thing I’d normally go for – it was delicious and I polished it off embarrassingly quickly. 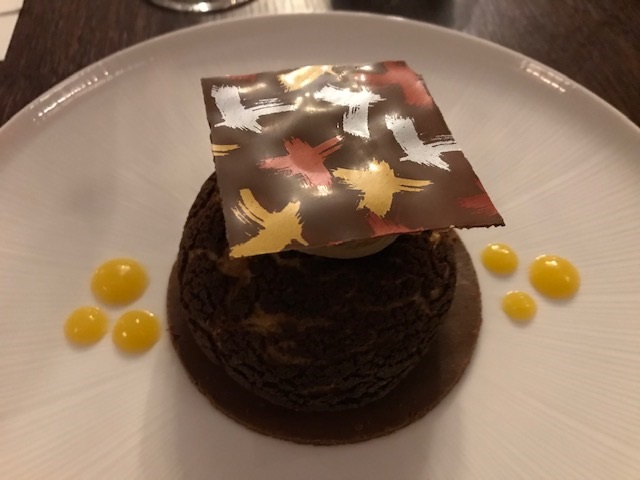 Described on the menu as ‘chocolate, orange, praline, choux’ this was a very indulgent dessert

Afterwards we had coffee and a game of Scrabble in the bar – which is lined with wood from cedar trees from the estate – and dutifully headed upstairs as the 10pm curfew demanded. The huge beds were as conducive to sleep as I’d hoped and I woke feeling unexpectedly full of energy and ready for a pre-breakfast stroll around Lainston House’s 63 acres. However the weather had other ideas – it was teeming down – and so I had an epic foam-filled bath instead, accompanied by the Lainston House rubber duck.

Breakfast was good and the service was prompt, far better than at dinner. Coffee arrived straightaway and there was a huge range of options, from cereal, fresh fruit, pastries, seeds and nuts in the continental option, and everything from a full English to porridge, Eggs Florentine or Royale, smoked salmon, grilled kippers and crushed avocado with poached eggs on toast. As you can’t serve yourself from the buffet these days the waiter had to do it for us and provided just the right amount of yoghurt and fruit compote as requested. They were also happy to replace the standard toast on the avocado with bagels for a change, and it was a great start to the day. 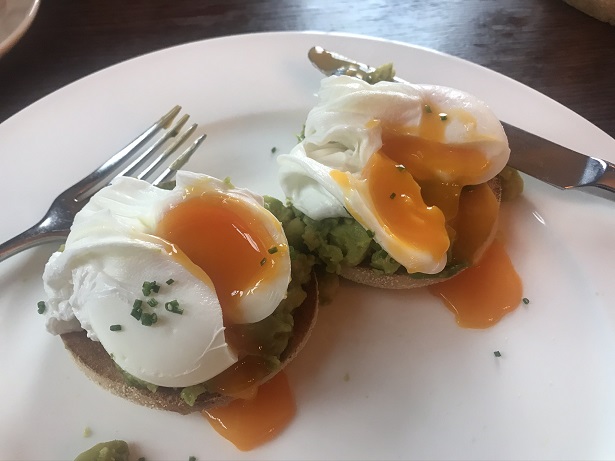 With my late check out request being granted I was free to hang out in my room until midday and found the desk tucked away in the eaves to be perfect for free wifi and WFH – in my case this stood for ‘working from hotel’. 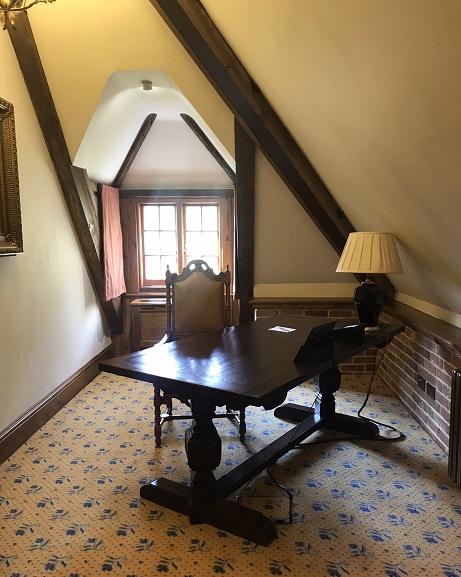 After a full 24 hours at Lainston House I was reluctant to leave but felt as it I’d been a away for a couple of nights at least – it is definitely on my list of hotels I’d happily return to.- it was a memorable stay and another excellent experience from the Exclusive Hotels group.

If you have enjoyed this review of Lainston House then check out my reviews of other Exclusive Hotels properties Pennyhill Park, South Lodge and The Manor House at Castle Combe: Pennyhill Park: a luxury hotel with a luxury spa; A West Sussex spa hotel stay at South Lodge, come rain or shine; Golf, honey and cocktails on the lawn at Manor House, a Cotwolds gem