No Getting out on the open road after months of lockdown has never sounded more appealing and when tyre company Bridgestone offered me the chance to try out their new high performance Potenza Sport tyres in a BMW 318d Saloon 2.0 SE while exploring southern England it was too good a trip opportunity to pass up.

Now I’m no tyre expert – so long as there are four of them that’s pretty good going in my opinion – but thankfully my plus one for the trip is far more tyre-savvy and so I’ve included his review below for all the technical stuff. For me, the chance to drive further than to the shops and back was the main draw and so the moment the car was dropped off outside my front door (it wasn’t hard to spot as you can tell from the pictures!) we were on the open road. 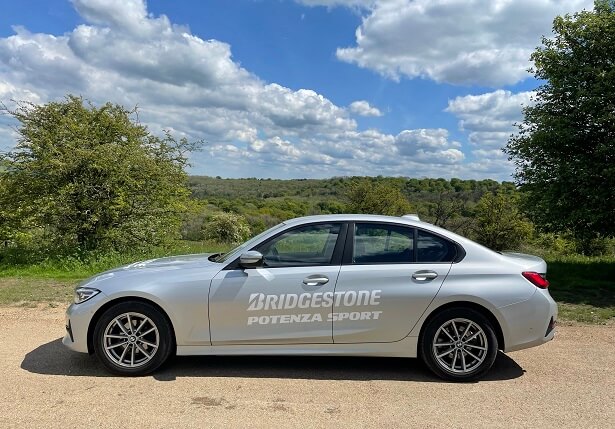 My car for my trip to Winchester was a BMW 318d Saloon 2.0 SE (with brand new Bridgestone Potenza Sport tyres, of course)

To get a true test of tyres I gather that you’ve got to test them in all sorts of conditions, particuarly wet ones, but I certainly wasn’t complaining as we whizzed round the M25 and down the M3 in glorious sunshine and in far smoother, quieter style than in my own rather excitable Fiat 500.

Bridgestone had kindly suggested an itinerary so our first stop was The Vyne, near Basingstoke, a 16th century Tudor palace which used to be owned by William Sandys, Lord Chamberlain to Henry VIII and which has been visited over the years by notables including Anne Boleyn, Elizabeth I and Jane Austen. Set in expansive gardens and large wood, The Vyne was a family home for several centuries before being used as a girls’ school and home for evacuees during the war and is now owned by The National Trust. 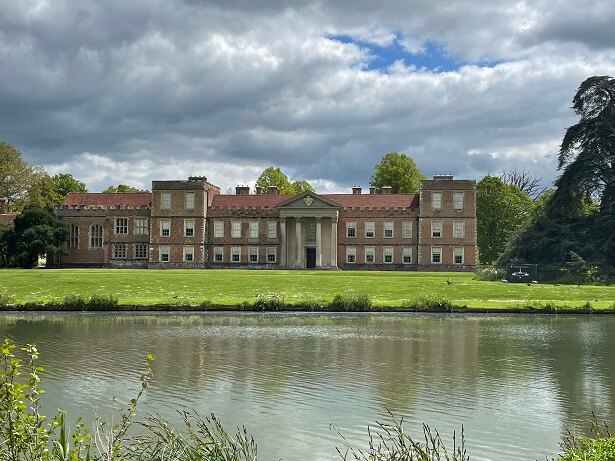 We enjoyed a quick scoot around the gardens in the sunshine before heading off to our destination of Winchester in Hampshire. I was here quite recently to stay in the delightful Lainston House hotel just a few miles outside Winchester itself, but this time we were privileged to stay right in the heart of Winchester, just a few metres from the famous Winchester cathedral in The Old Vine hotel.

Staying at The Old Vine Winchester

The location of The Old Vine couldn’t be bettered, being just a few metres from the historic cathedral itself. This four-star hotel is an 18th century inn which has six individually-designed double and twin rooms as well as a two-bed family apartment.

The friendly staff greeted us the moment we arrived and immediately handed us a parking permit for the car (the only downside to the central location is that there is no parking at the hotel, so you have to try and find the correct street parking zone and leave your car there overnight) and showed us up to our room, Design House. This was a top-floor suite running the length of the hotel frontage and contained a bedroom area with a kingsize mahogany sleigh-style bed, sofa and wardrobe, and then a lounge area with comfy chairs, dining table, desk and en-suite bathroom with bath and shower. 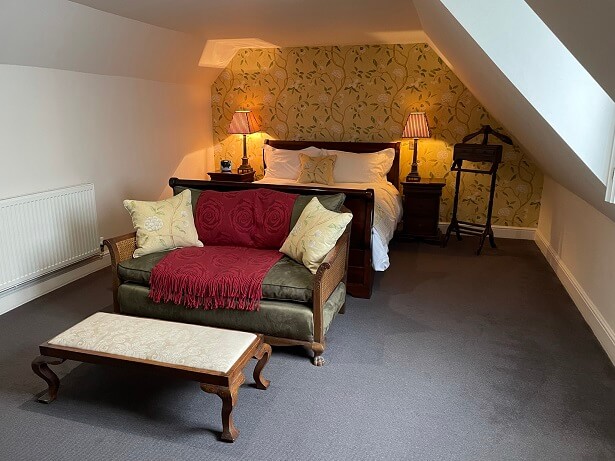 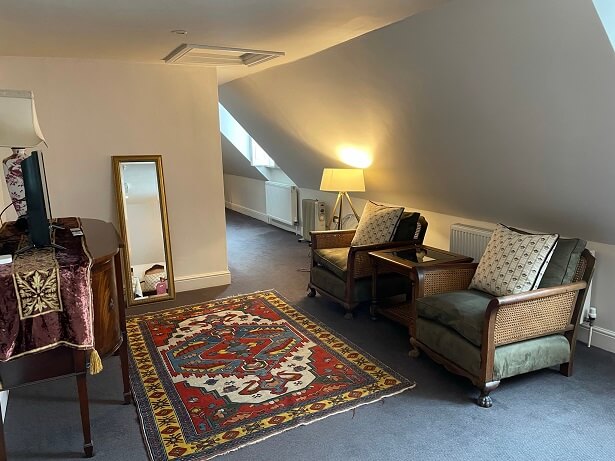 The bedroom had a separate lounge area 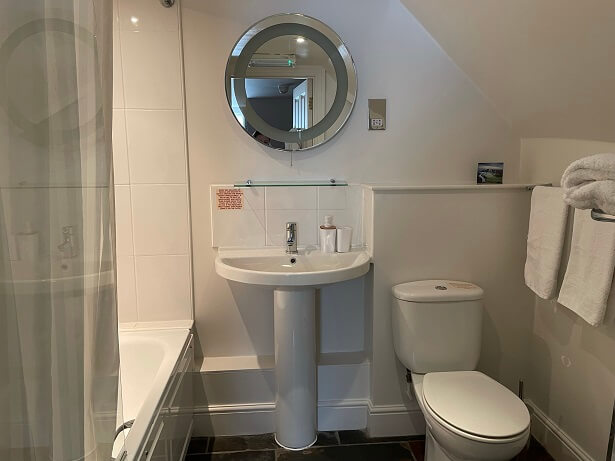 The bathroom was small but well equipped

It faced directly out onto the entrance to the cathedral grounds which made you feel right at the heart of the city, and while the furnishings were a little dated – a differently-coloured carpet would have really brightened up the room, and there were a few random elements such as a mirror just propped up against the wall, and an old-fashioned plug-in radiator – it was lovely having so much space to ourselves.

While it was tempting to walk no further than downstairs at The Old Vine and find a spot for some al fresco drinks – there are tables outside the front of The Old Vine, great for people-watching, as well as a small sun-trap courtyard out the back – the chance to explore Winchester from this very central spot was too good to miss, so we spent a very pleasant hour or so wandering around its historic streets. 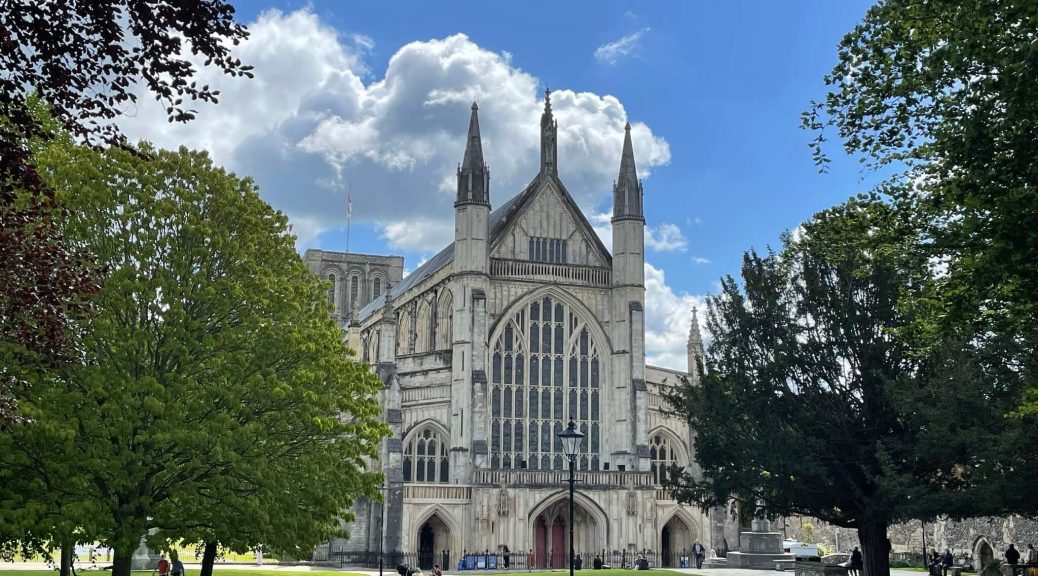 The Old Vine hotel was just across from the entrance to the cathedral grounds, meaning this view was less than a minute away

The cathedral was our first stop and while we would have loved a peek inside it would have been an expensive peek at £20 entry fee so instead we did an impromptu tour of Winchester’s oldest landmarks, from the Guildhall to the Abbey Gardens and the medieval gates at Westgate. Just nearby was the Great Hall which contained a replica of King Arthur’s Round Table (hung on wall like a giant dartboard) which sounded intriguing but sadly it was closed, so we made do with a drink at the nearby Westgate pub at the top of the hill.

Dinner at The Old Vine Winchester 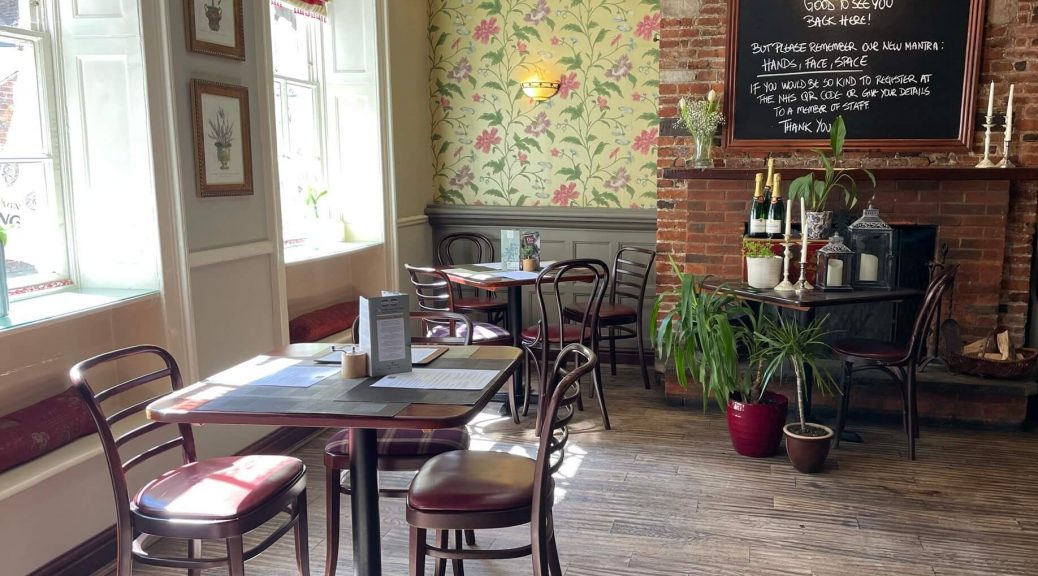 Dinner at The Old Vine Winchester was a real delight with friendly, efficient staff, excellent food and the sheer joy of being back inside a restaurant again. The substantial menu which offered bar snacks, lunchtime sandwiches and ploughmans alongside starters, light bites, mains, plant-based mains and puddings would suit a whole range of appetites and centered mainly around hearty, classic British pub fare, from baked Camembert and fish and chips to salmon fillet, beef and plant burgers, sirloin of steak and lamb shops. 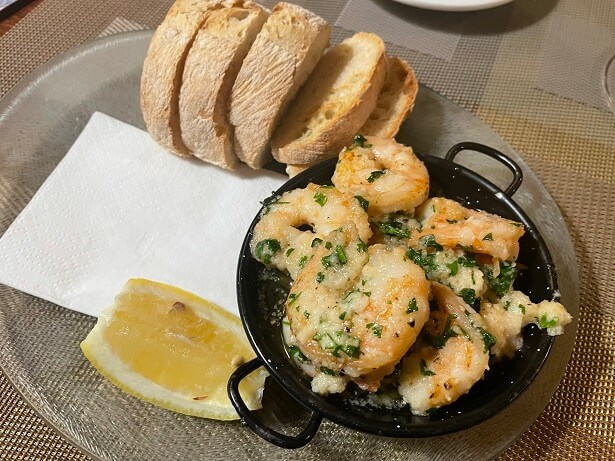 My starter of pan-fried Tiger prawns with garlic and parsley

My starter of pan-fried Tiger prawns with garlic and parsley was a perfect appetiser and I was glad I hadn’t gone for something more substantial when I saw the size of my main course, Cornish mussels with shallots, white wine and cream. It’s no exaggeration to say that it was the largest portion of mussels I’ve ever had (the picture doesn’t really reflect how enormous it was) and while it was exceptionally delicious, neither or us could finish (which is better than being left hungry). 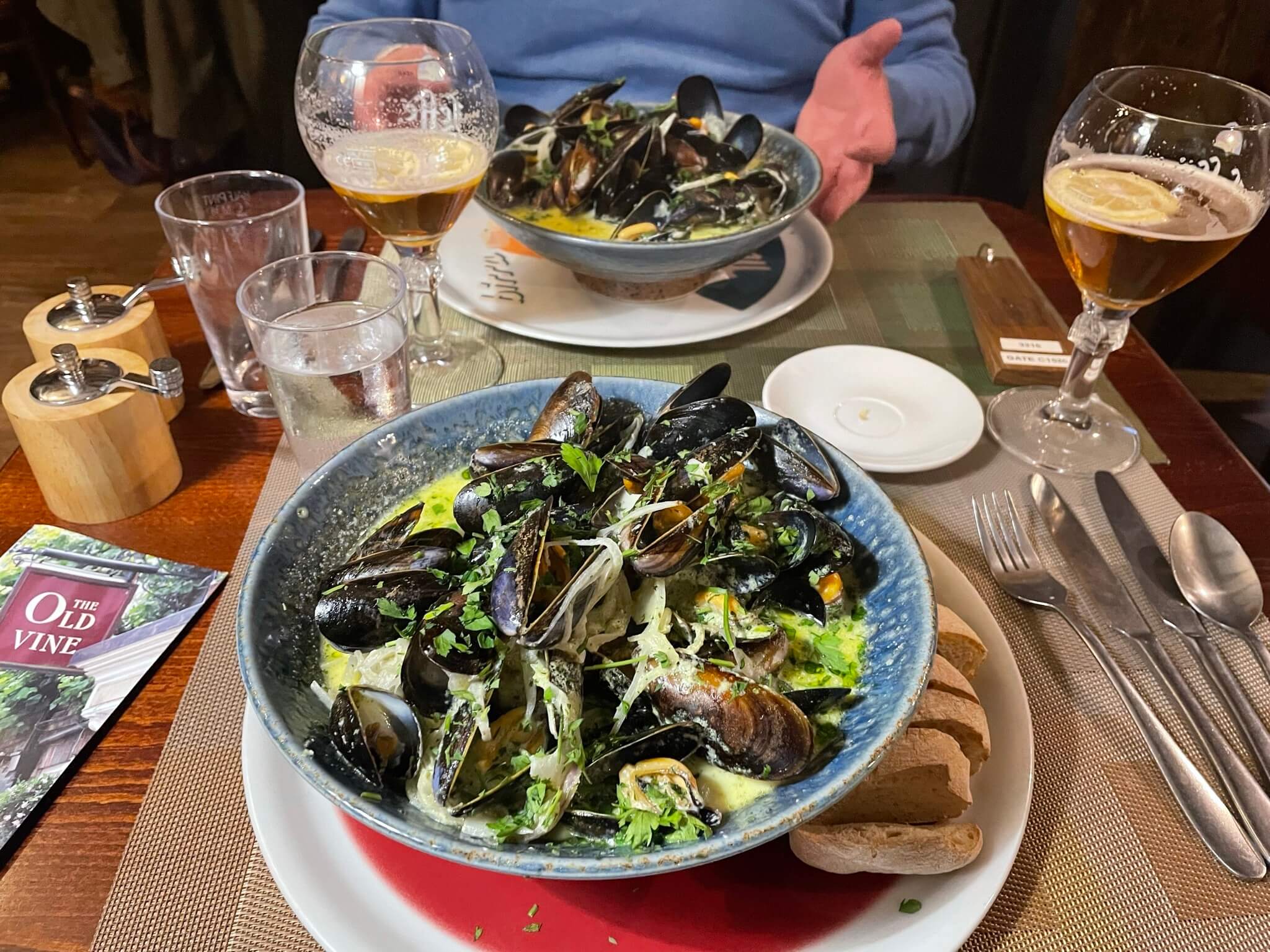 My main course Cornish mussels with shallots, white wine and cream was vast and delicious

We were fairly abstemious on the drinks front, each having a Leffe Blonde during the meal and finishing off with an Espresso Martini instead of desert, and slept soundly, waking up the next morning to the sound of the nearby church bells.

Breakfast in our room was served promptly and then it was time to hit the open road in our BMW once again. The reason Bridgestone had lent me a car (and four brand new tyres) for the trip was not only to promote their new Potenza Sport tyres but to reveal its new staycation survey (see graphic) so it seemed appropriate to get a few miles under our belt. 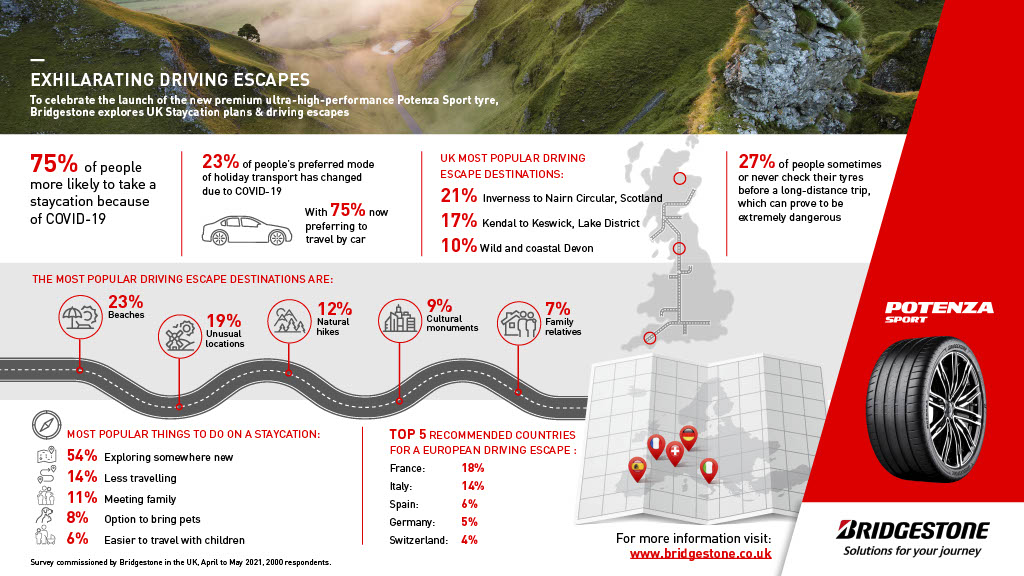 To mark launch its new Potenza Sport tyre, Bridgestone carried out a survey of British staycation plans for this summer

The weather was glorious so we headed straight for the coast, just 45 minutes away from Winchester, and the pretty fishing village of Emsworth on the Hampshire/West Sussex border. Known for its picturesque coastal walks, pleasant pubs and notable residents which have included PG Wodehouse (who named its much-loved character Lord Emsworth after the village) and Albert Finney, Emsworth is well worth a visit and is handy for the historic towns of Chichester, Arundel and the nearby holiday resort of Hayling Island. It was with some reluctance after our tour of southern England that we headed for home but it was proof that even one night away from home is definitely worth it. 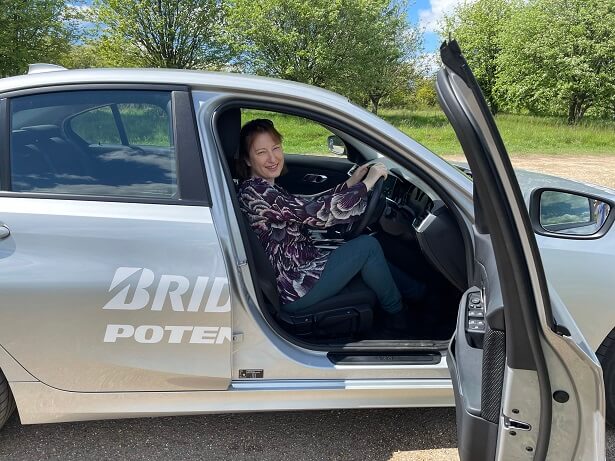 Auditioning for the new series of Top Gear 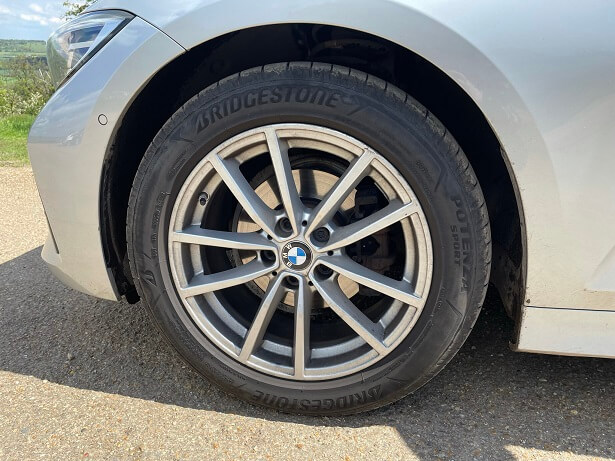 The car: The Bridgestone Potenza Sports were fitted to the new BMW 318 for this road test across the UK. Settling in to the futuristic tech loaded BMW thoughts emerged as to why I need performance tyres, that are traditionally noisy and bumpy, for this gentle jaunt through the green hills of England. The choice of tyre is about much more than keeping you on the road when cornering, they have a lot to do with the ride of the car and the road noise. They are part of the suspension of the car. There was a learning period whilst getting to grips with the plethora of technology in the BMW but once the sat nav was set and the weather radar was on we set a course straight for Old Vine Hotel in Winchester.

The journey: Having had the fortune to recently drive another well-known German made car with suitably ‘high profile tyres’ to absorb those little bumps, and huge pot holes, in the road and give that quiet smooth journey, it seemed a shame to put racing tyres on a grand tourer.  How wrong a person can be. Around the country lanes of South England and along the notoriously terrible concrete stretch of the M25, between junctions 9 and 11, the cabin was silent and the ride was superb. In the uncharacteristically dry British weather the car was planted to the road, it cruised around the windy roads with ease and this was in no doubt partly due to the new shoes it was wearing.

The conclusion: The BMW 318 with Bridgestone Potenza Sport tyres can be compared to Usain Bolt doing the 100m sprint in slippers. All the performance, grip and security of a serious performance tyre with all the comforts of a traditional Chesterfield sofa. This is a tyre that will put a smile on your face and keep your car safely on the road in all conditions. Competitively priced, the Bridgestone Potenza Sport takes on all of the premium performance tyres for grip in the dry and wet weather, while still achieving a superbly civilised and quiet ride.