When it’s hot in the city, your first instinct might be to head for the coast but just a short walk from Tottenham Court Road tube station, The Bloomsbury hotel London is a great spot in which to cool down. 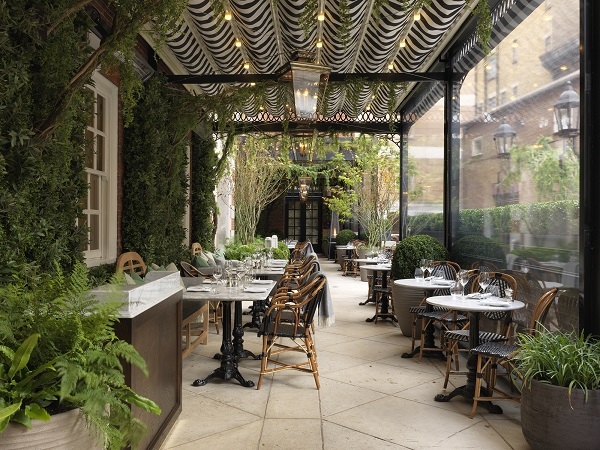 Outdoor terrace at The Bloomsbury hotel

Its hidden secret is the Dalloway Terrace which runs along the side of the hotel: from the outside it doesn’t look like anything special, but those who ascend the steps will find a lovely two-tiered terrace with lush plants  – the perfect place in which to shelter from the boiling sun and enjoy afternoon tea, a cocktail or two, or even an al fresco dinner as night descends. 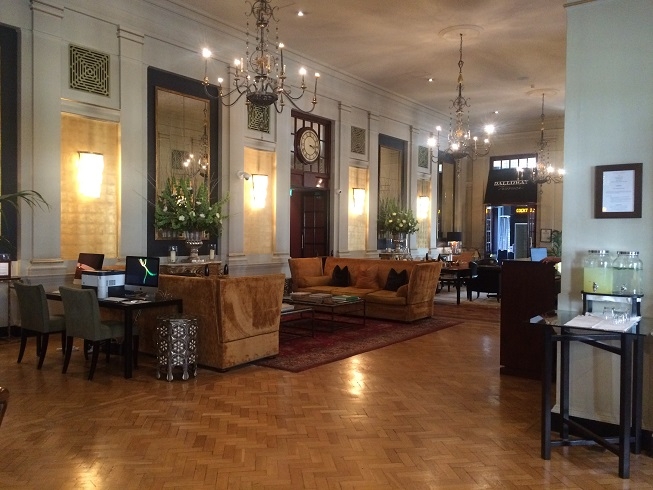 The grand lobby of the Bloomsbury hotel

Having endured a sweltering Tube journey across town, I was somewhat surprised to be asked: ‘Would you like a hot towel?’ when I checked in at reception. Rather than risk over-heating, I accepted a cooling mint water instead from the water coolers in the lobby and headed up to my room, a studio suite, which was on the fifth floor. 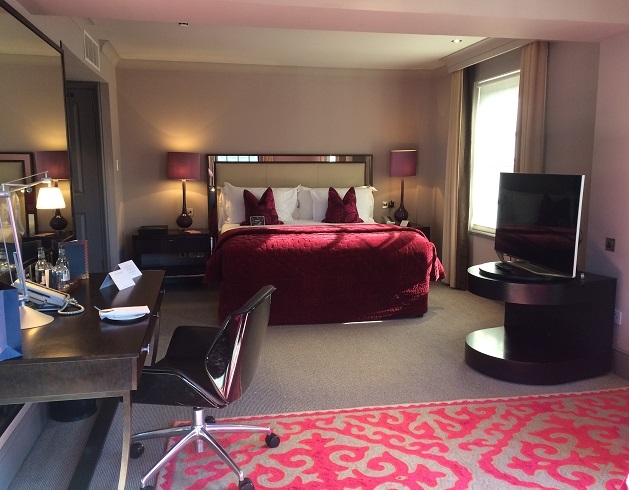 My room was a great size, with big windows, no noise from outside and vivid splashes of colour everywhere 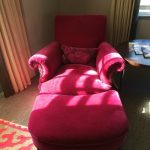 Bedrooms at The Bloomsbury

It was vast, especially by London standards, with a king-sized bed, desk, a bright pink chaise-longue, ample storage space and a massive TV on a clever swivel stand. The bathroom was smart in a black and white art deco marble style, with walk-in shower, twin sinks, rolltop bath (with a TV at one end) and separate loo. 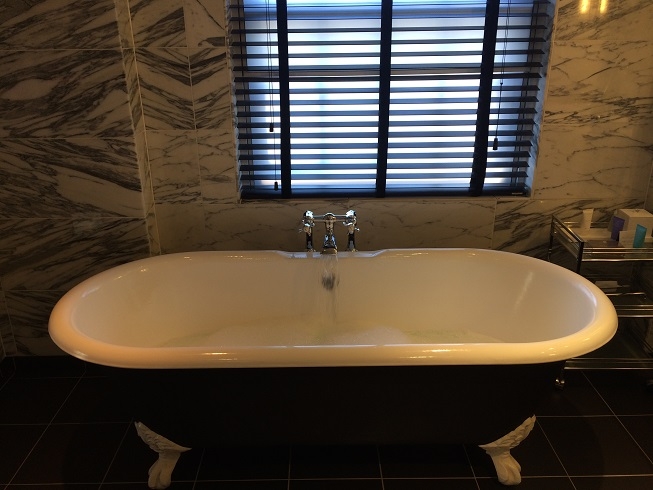 The roll-top bath in my very smart bathroom. There was a TV at one end and twin sinks at the other 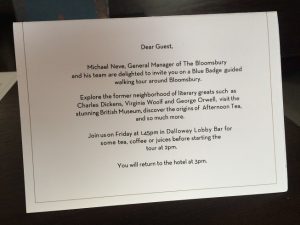 My invitation to a literary walking tour of Bloomsbury

There were lovely touches such as an umbrella on a stand for if the weather turned and, as befits a hotel in the heart of literary Bloomsbury, an invite to a walking tour of the area, following in the footsteps of George Orwell, Charles Dickens and of course, Virginia Woolf.

Cocktails at the Dalloway Terrace

The shaded terrace was calling so a quick turnaround meant I was soon in seated at the Dalloway Terrace, in cooler clothes  and about to dive into a cool drink. While there was a decent cocktail list, there was also a special pop-up bar and list of cocktails made with the French G’vine gin. It seemed rude not to try them, so I went for a Bloomsbury Martini and my friend Duncan, who worked just round the corner, chose the Dalloway Spritz.

They were both very refreshing and tasty – possibly the menu could have hinted at size though, as Duncan’s was three times the size of mine, but sitting out in the heat without feeling hot and bothered was lovely. 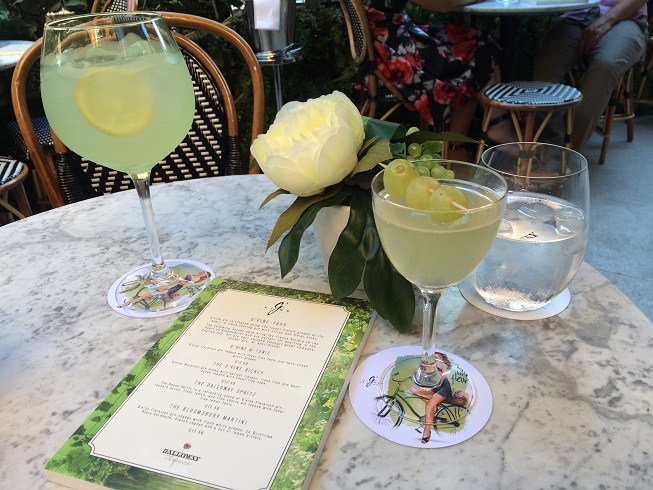 Round two of the cocktails was a little less successful as my cucumber sour looked pretty but seemed to not contain any alcohol at all. After a little discussion as to whether it did or not, the waiter admitted that some cocktails weren’t actually made in-house but were brought in ready-made, which seemed a shame considering there was a very impressive bar downstairs. 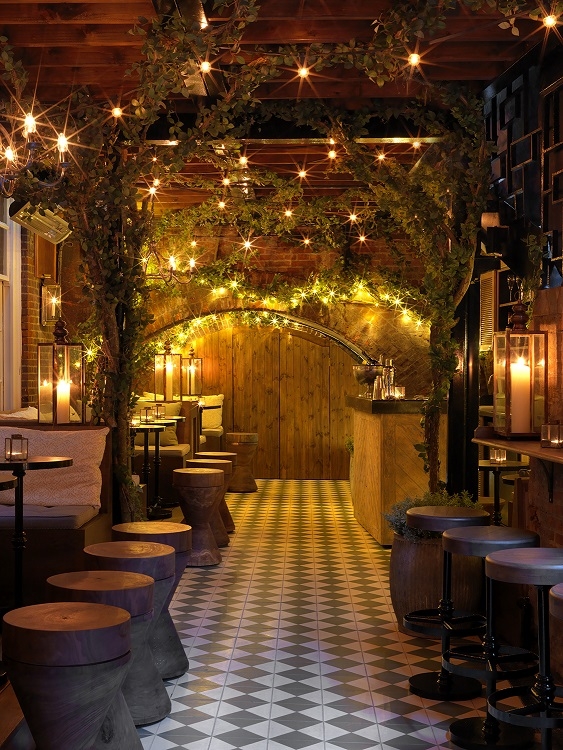 If you fancy a cosier cocktail place than the terrace, there is the Bloomsbury Club Bar downstairs, which has a heated outside area (pictured)

Duncan had no complaints about his Honeycombe Old-Fashioned though, and things looked up again when we realised we could eat outside rather than having to leave the lovely terrace, and from the proper restaurant menu too.

Outdoor dining at The Bloomsbury

It’s always a good sign when it’s impossible to decide what you’re having and there was a good 20 minutes of dithering before we decided on our starters of Dorset crab on toast and seared tuna, followed by seared scallops with spinach and chanterelles, and the day’s special of roast hake with olive pesto. 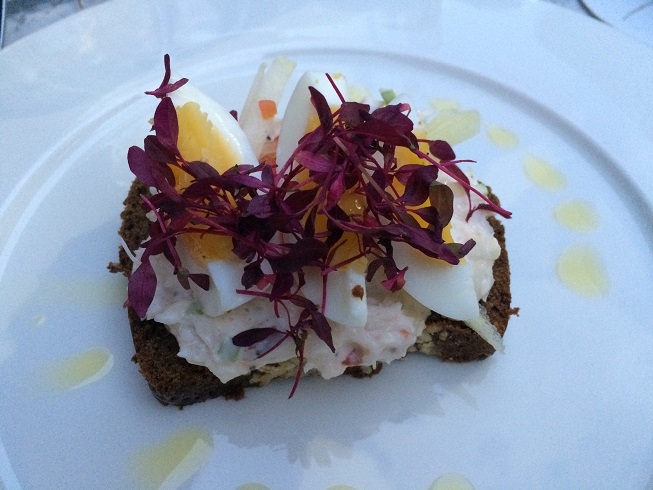 My starter of Dorset crab on toast, with apple, egg and watercress 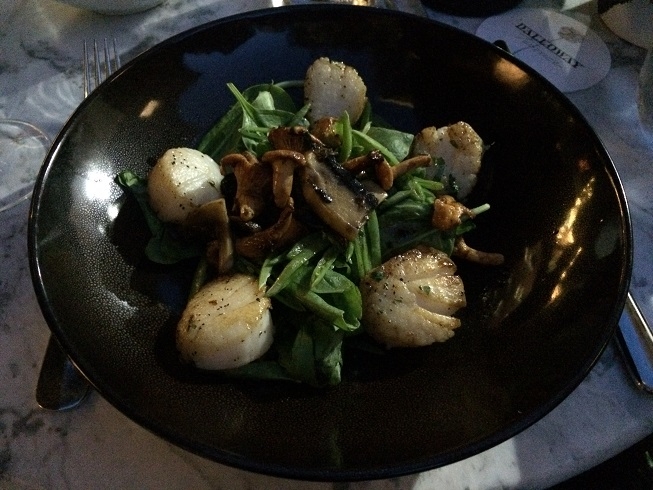 The main course of hand-dived scallops with spinach, chanterelles and teriyaki dressing

The chef didn’t put a foot wrong with all dishes being extremely tasty and as the sun went down and the night lights came on, the whole effect was of a Mediterranean evening rather than one just steps away from the roadworks hell of Tottenham Court Road.

Breakfast at The Bloomsbury

Breakfast the following morning wasn’t as memorable as dinner, as even though the Dalloway Terrace was open, hotel guests weren’t allowed to eat there but were served downstairs in a low-ceilinged, claustrophobic room. While the cooked option was fine, breakfast in the sun could have been a perfect end to my stay. 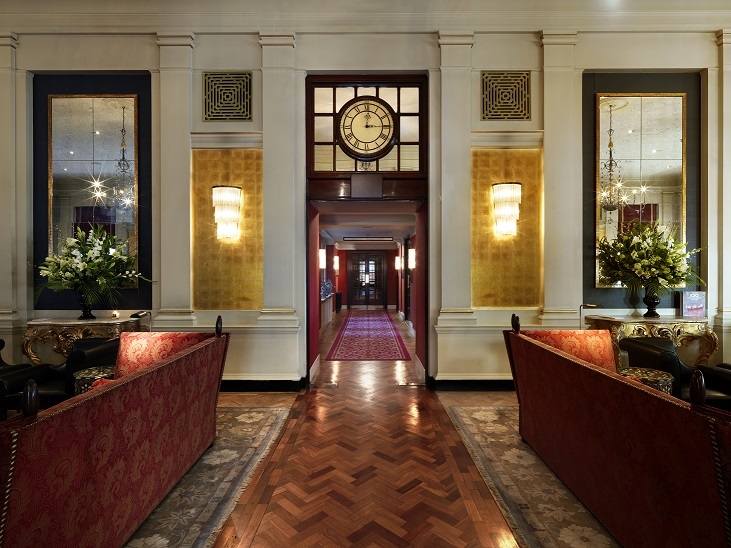 The entrance shows the 1920s style elegance of the hotel

However the rooms are priced very reasonably for such a central location and smart hotel, and I will most certainly be back for another evening of cocktails and excellent food on the Dalloway Terrace, even after the summer is over.

Hotel information and to book The Bloomsbury

Rooms at The Bloomsbury start from £225 and Studio Suites (like the one I stayed in) are from £420.

Check availability and book The Bloomsbury by clicking here

The Bloomsbury is part of The Doyle Collection which includes The Kensington and The Marylebone hotels in London and the Westbury in Dublin.

If you like luxury hotels in London, then you’ll also like: Discovering hidden treasures at The Stafford, St James’s; A room with a view at ME London;  A Michelin-star stay at St James’s hotel and club; A five-star spa break at the Corinthia hotel, London