Having lived in London for most of my adult life, a stay in a central London hotel is a real luxury. It becomes even more so when, like The Mayfair Townhouse hotel, it is located just by one of my favourite London locations; the 18th century square tucked away between Park Lane and Berkeley Square known as Shepherd Market and which has retained much of its charm since I first discovered its delights 20 or so years ago. 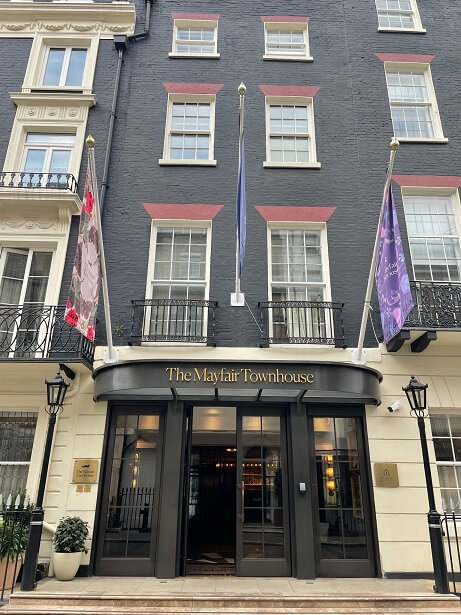 As a recently-hired journalist at a national newspaper, company CEOs and PRs were eager to wine and dine me and I would spend many a happy lunch at the likes of the Wolseley restaurant, just around the corner on Piccadilly, or Le Boudin Blanc, which is in Shepherd Market itself.

Convivial lunches would invariably end up with even more convivial drinks at one of Shepherd Market’s historic pubs – the Grapes was a particular favourite – and it would be late in the day before I would finally tear myself away and stagger down the narrow White Horse Street towards Green Park and the bus or taxi home.

Visit the Mayfair Townhouse on Tripadvisor

The area at the time was known for being rather seedy – there were handwritten notices pinned to some of the doors containing just a name and a phone number, and while it had a reputation as a red light district – I never felt anything than safe here. When I returned to review The Mayfair Townhouse hotel I was delighted to see that the area had resisted becoming bland and gentrified and there were some new interesting, independent shops and bars nestled in among the historic buildings. 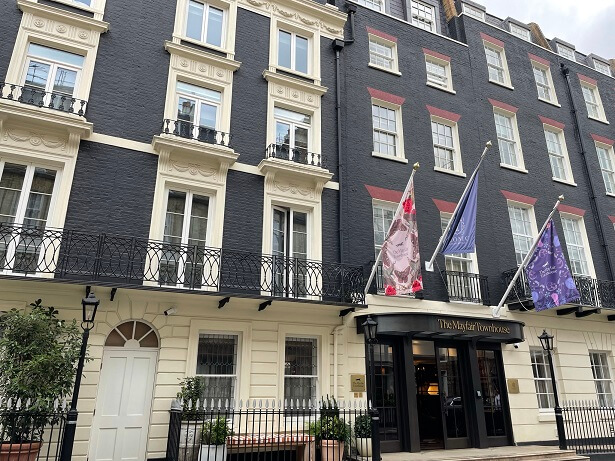 Staying at The Mayfair Townhouse

The Mayfair Townhouse hotel is on Half Moon Street, just a street away from Shepherd Market itself and a short walk from Green Park tube station. As a base for first-time visitors to explore London it is incredibly handy, being just a short walk to The Ritz, Buckingham Place and Leicester Square. The street itself was closed due to roadworks so it was quiet and traffic-free as we walked up to the entrance to be greeted by Gary, the friendly and efficient doorman. Gary took our bags and we were quickly checked in and shown to our room on the first floor.

The Mayfair Townhouse hotel is owned by Iconic Luxury Hotels, which also owns classic country house hotels Cliveden House and Chewton Glen as well as historic Cotswolds coaching inn The Lygon Arms. However it is very different in style to any of those. The hotel – as befits its name – is actually made up of 15 Mayfair townhouses knocked together in a line which takes up almost all of one side of Half Moon Street – and if you stand outside you can trace the different lines of each building.

Inside, as you walk along the plush but narrow corridors, the join is hardly noticeable (except for an occasional step up or down), and means that the hotel contains an impressive 172 bedrooms and suites while looking from the outside like a smart private residence. The building dates back to the 1700s when the Renard Family, wealthy Huguenot refugees from France, used funds from their family bank to construct rows of townhouses for the newly wealthy merchant class and the whole street was a colourful haunt for bachelors, bohemians and artistic types in Victorian London.

Bedrooms at The Mayfair Townhouse 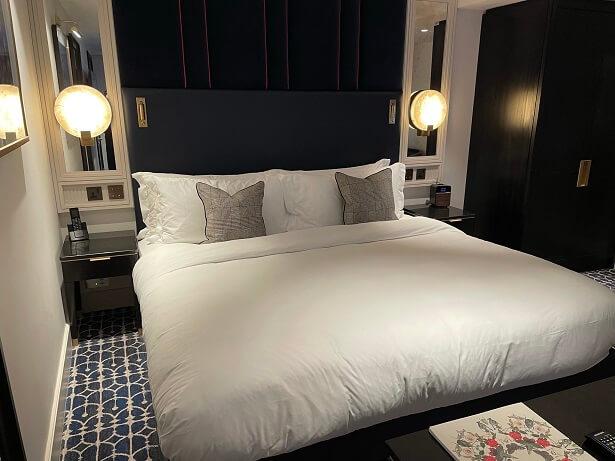 Our bedroom at The Mayfair Townhouse hotel was a Junior Suite, with a separate lounge area

Bedrooms at The Mayfair Townhouse range from cosy Cabin and Classic rooms to Deluxe, Deluxe Garden, Executive and then a range of larger suites. We were staying in a Junior Suite which meant the room was split into a separate lounge area and a bedroom space containing a King-sized bed, minibar with complimentary snacks and drinks, TV, Nespresso machine and various wardrobes and side tables. In London hotel rooms, space is usually at a premium and it would have been nice to have had one larger room instead of a rather redundant sitting room area, but it could have been laid out that way due to supporting walls. 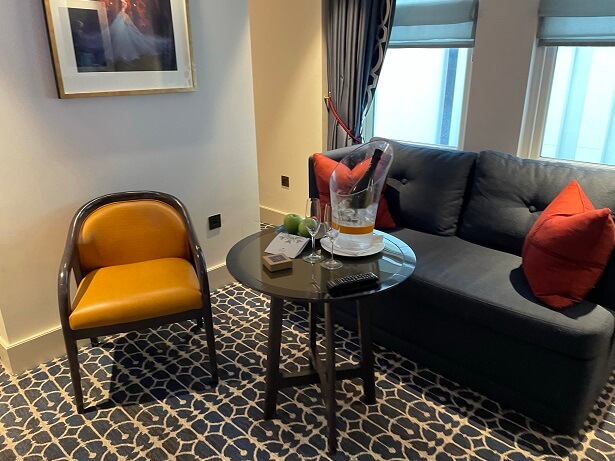 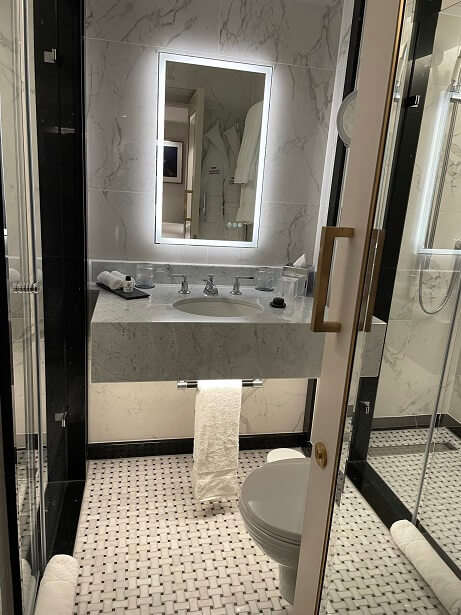 The bathroom was small but perfectly formed, with a walk-in rainfall shower, lots of fluffy towels, good lighting and complimentary toiletries

The bathroom was tiny but immaculate with lots of fluffy towels, mirrors, toiletries and so on and a walk-in shower, and overall it felt like every detail had been carefully considered, with multiple plug points, sensible light switches (including a useful master switch) and a digital radio. There was absolutely no trace of traffic noise either, even though the hotel is just a few steps away from busy Piccadilly. 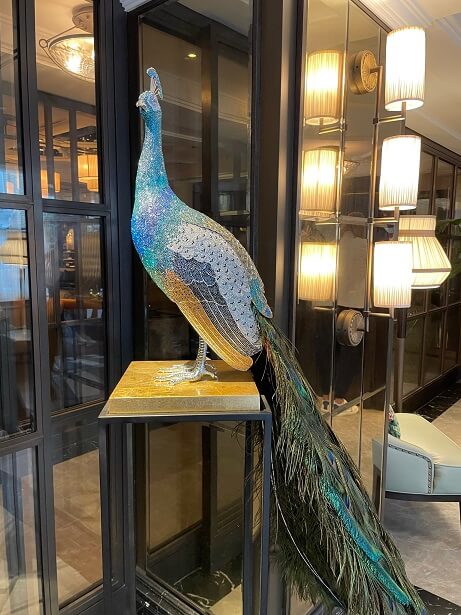 This two metre-tall Swarovski-encrusted peacock with headdress and tail feathers is in the lobby of The Mayfair Townhouse was designed and created by Clarita Brinkerhoff, pioneer of the ‘jewel for the home’ sparkling interiors movement. It refers both to Oscar Wilde’s own ‘peacock’ tendancies and designs for his play Salome and is called Alfie after Lord Alfred Bruce Douglas, Wilde’s lover 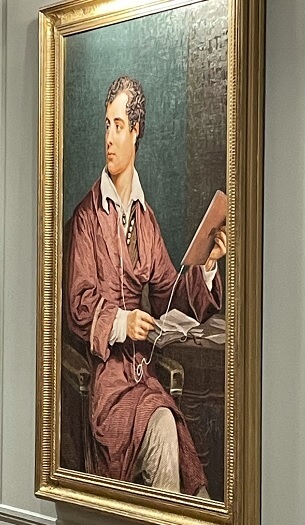 The Mayfair Townhouse is keen to elevate itself from a purely functional London hotel – although business travellers would be perfectly at home here – and describes itself as ‘curious, engaging, witty and effortlessly intuitive’ adding:  ‘Inspired by the whimsical characters of the past and present, the townhouse is flamboyantly dressed, yet carefully understated, The Mayfair Townhouse is a new generation of lifestyle hotel delivering the unexpected in the heart of Mayfair.’

This is a bold claim to live up to and takes its inspiration from a possible connection to Oscar Wilde: the Irish author, poet and playwriter’s most famous work, The Importance of Being Earnest, is set on Half Moon Street and he, as well as various associates and lovers including Lord Alfred Douglas, might plausibly have walked along the corridors of what it now The Mayfair Townhouse hotel.

With this in mind, the hotel has thrown itself headlong into fun, colourful artwork which is worth a second look: a figure in Victorian dress listening to an iPad; a flamboyant peacock theme running through the hotel, from sculptures to tie-pins; an entire room given over to pictures of humanoid foxes – getting married, riding bikes etc – (the foxes are a reference both to mischief and Iconic Hotels’ country properties) – plus still life photographs given an other-worldly makeover.

It was hard to judge if any of this quirkiness translates into real-life Wildean charm and decadence though; the hotel was extremely quiet at the time of our stay due to reduced staffing capacity and the ‘beating heart’ of the hotel, the Dandy Bar, was almost empty the entire time we were there. During the build-up to Christmas however, I’m sure it is packed with festive revellers and Christmas shoppers alike and hopefully exudes a little more of the fun and flamboyance which it is obviously aiming for. 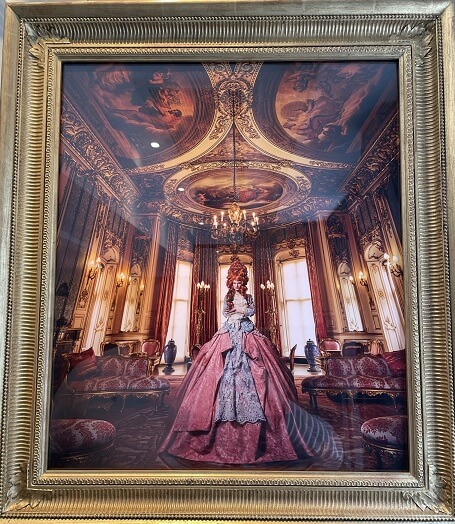 As well as the main bar, the Dandy Bar (more of which below), there is a small basement gym, the Lower Ground restaurant where breakfast was served and The Den, which is just off the below-ground restaurant and festooned with the afore-mentioned pictures of foxes dressed up as humans. 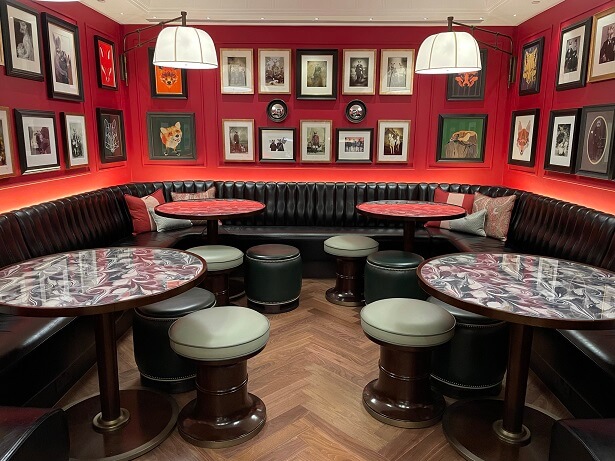 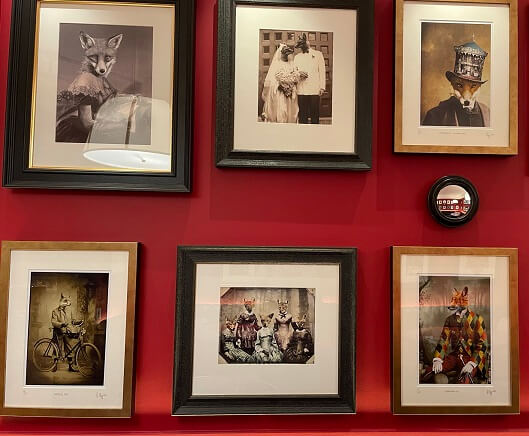 Drinks and food at the Dandy Bar

The Dandy Bar is self-proclaimed ‘heart and soul of The Mayfair Townhouse’ and is a cosy, low-lit space which very closely navigates the line between artistic decadence and immaculate furnishings. 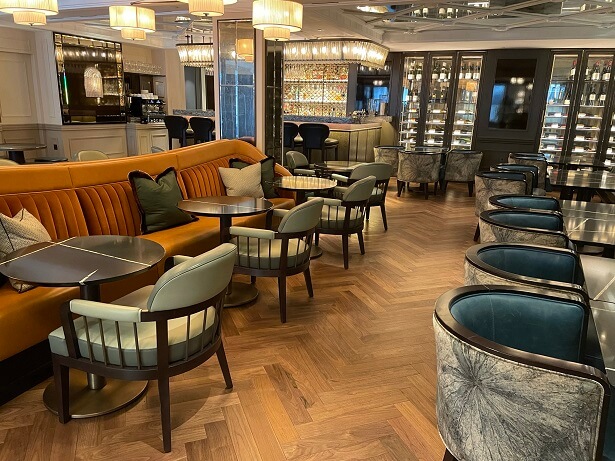 The parquet flooring and art deco-style chairs and lighting are great at evoking a New York-style bar of the 1920s but the carefully-plumped cushions and uniform furniture takes away some the care-free decadence it is trying to evoke. The cocktail list looked great though, ranging from the Mr Bosie – that Oscar theme again – which is composed of Belvedere Heritage vodka, Bombay Sapphire gun, Champagne cordial, Abbots bitter edible paint and artemesia jelly and our favourite, The Casanova, with Sabatini gin, Venetian Aperitif, lemon, poli grappa and prosecco.  Clearly the bartenders and mixologists at The Dandy know their cocktails well and our waiter even took the time to explain what the Venetian Aperitif was, and how it differed from more familiar versions such as Aperol. 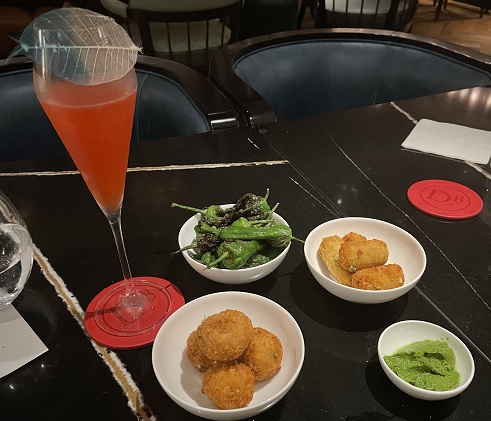 Having indulged in a vast afternoon tea elsewhere, we were happy to try a succession of small plates rather than go for the heavier options on the menu such as the Mayfair Townhouse burger, steak sandwich or truffle risotto. We accordingly started with a selection of charred padron peppers, truffle and parmesan arancini and Jerusalem artichoke croquettes before the tuna tartare and antipasto of charcuterie, mozzarella balls, olives, cheese and bruschetta. The cocktails totally outshone the food which was more a reflection on how good the cocktails were rather than a negative comment on the food, but it’s fair to say we both thought the food wasn’t as good as we’d hoped. The olives were soft and tasteless, there was no bread/crispbread/crackers with the antipasto dish for the cheese and meats if you’d so desired and the bruschetta felt like it had just been thrown together without much care, which was a shame (especially for £18). The presentation for all dishes could have been smarter too, with more of the quirky, bohemian air which the hotel is after.

Tuna tartare and antipasto at The Mayfair Townhouse hotel 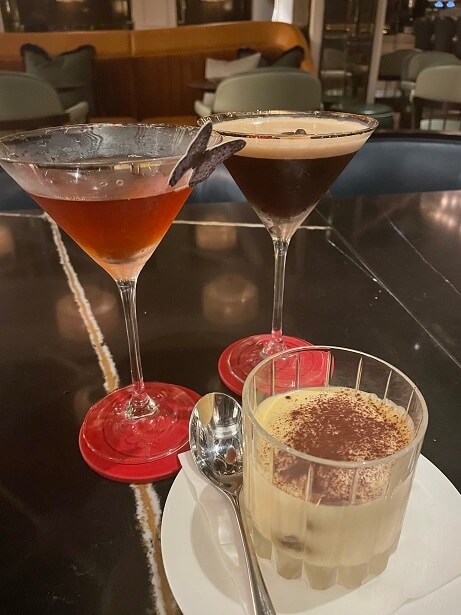 A couple of some excellent cocktails including an espresso martini, a Manhattan and a serving of tiramisu

It probably didn’t help that we were the only people in The Dandy Bar on a Saturday night, in a Mayfair which we discovered was heaving with people once we’d finished our final round of cocktails and ventured outside. Gary the doorman later assured us that it had been packed the previous two nights, so I’m sure it more than comes into its own on livelier nights.

Breakfast at The Mayfair Townhouse hotel 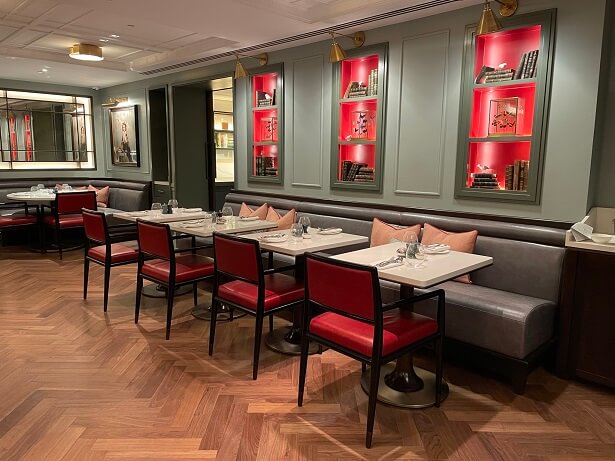 Breakfast was served in the lower ground floor restaurant

Excellent coffee was served promptly (as were refills) and the cooked options were very good, including the ubiquitous poached eggs and smashed avocado on toasted sourdough, and the baked eggs with chorizo, peppers and tomatoes.

We were then given a tour of the property including the top-end garden suites, which were at the time of our stay out of use due to renovation works from the neighbouring In & Out Club which is being converted into a hotel. 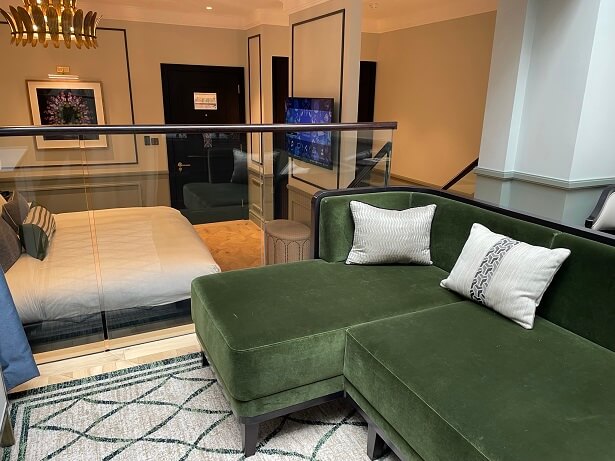 Overall, I’m sure the hotel will benefit hugely from the liveliness of more guests when tourists return to London after the pandemic, and the friendliness of the staff such as Gary and general manager Mitchell could not be faulted, ditto the helpfulness of the front desk staff – but the townhouse building style with limited public areas does rather restrict it from being a fully-open space where all its quirky charms can really come to life. However it’s certainly an interesting addition to this high-end luxury chain of iconic hotels.

Hotel information and to book The Mayfair Townhouse

Visit the Mayfair Townhouse on Tripadvisor

Check out the other amazing hotels which are also part of Iconic Luxury Hotels including: My stay at Cliveden House hotel, Berkshire, favourite of poets, players and princesses; My night in Chewton Glen in the New Forest, luxury from spa to treehouse; Luxury in the Cotswold at The Lygon Arms, Broadway

If you like reviews of London hotels then check out: A Sherlock-worthy stay at Holmes hotel on Baker Street; A penthouse stay at nhow hotel, east London; Great cocktails and a sight-seeing based at Hyatt Place on Whitechapel Street; A luxurious five-stay at at The Stafford, Mayfair; Disco lights and a budget stay at Point A, Kings Cross; 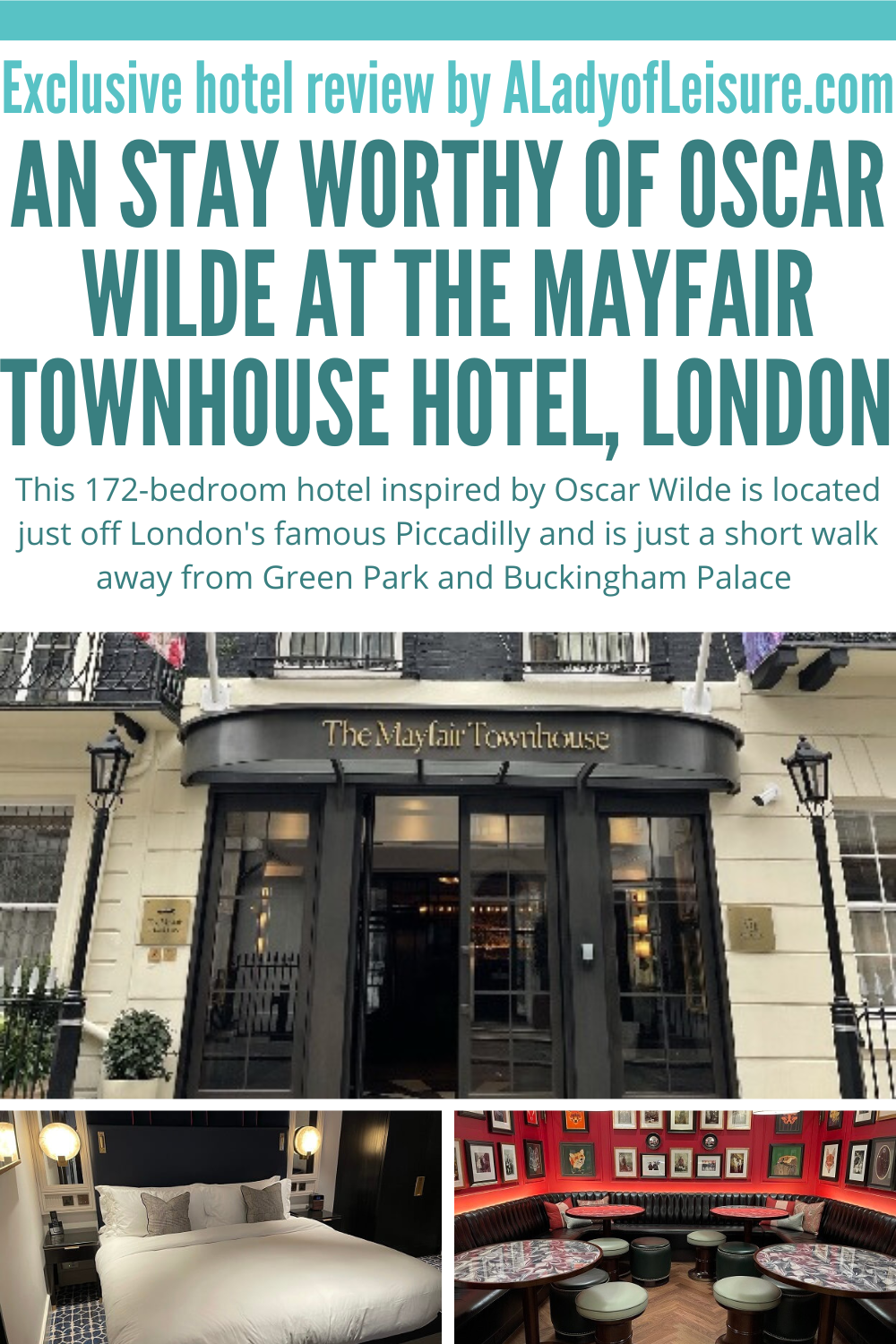