Proof that you don’t have to travel far to enter a whole new world came with my recent stay at the Bel and the Dragon Churt, in Surrey. A quick drive around the M25 and along some pretty country lanes and before long I was sitting in a vast beer garden in glorious sunshine, surrounded by the Saturday papers and drinking an extremely refreshing Sipsmith London Cup cocktail. The staycation had begun.

The Bel and the Dragon collection of pubs 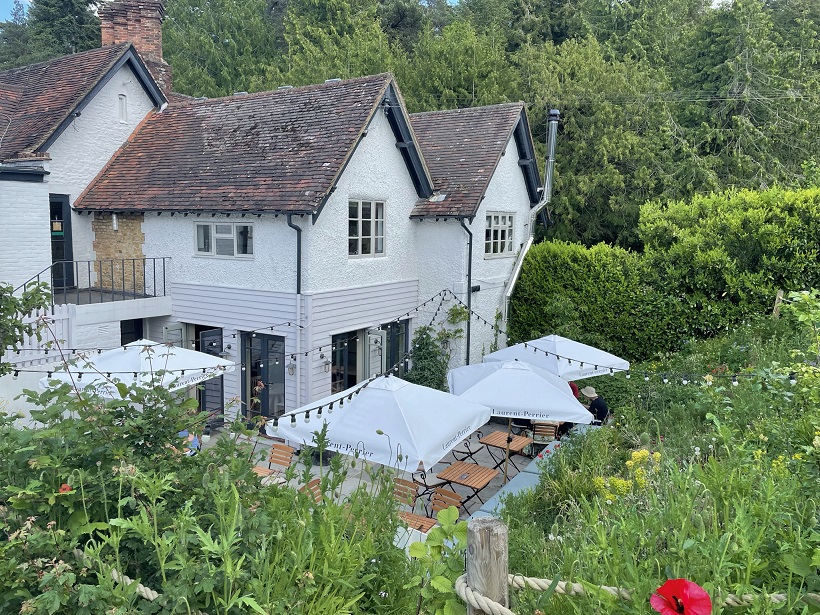 Bel and the Dragon Churt boasts a vast split-level beer garden, perfect for a sunny afternoon

The Bel and the Dragon chain of country inns was previously owned by entrepreneur Joel Cadbury and is now owned by London hotels and pubs company Fullers (who have recently snapped up several pub chains including the lovely Cotswolds Inns and Hotels group).

There are six Bel and the Dragons located across southern England, including Bel and the Dragon Cookham, Windsor, Reading, Kingsclere and Odiham, and have built a reputation for good food, large beer gardens, well-designed bedrooms and a classic pub atmosphere.

A stay at Bel and the Dragon Churt 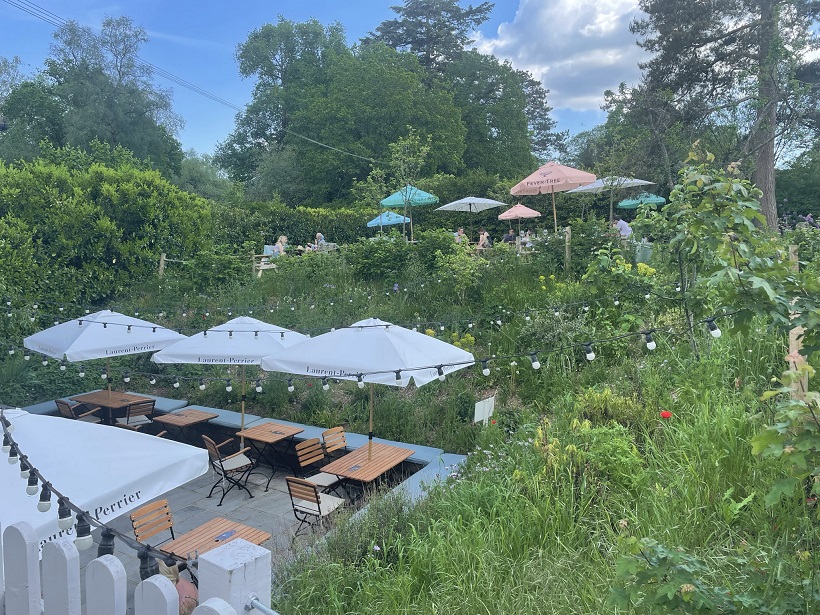 Situated in the picturesque Surrey Hills between the historic town of Farnham and the Devil’s Punch Bowl popular walking spot, Bel and The Dragon Churt is a beautifully restored 150-year old country inn with 18 en–suite bedrooms, a large bar and restaurant and vast, split-level beer garden.

We arrived at the Bel and the Dragon Churt, which is actually located a mile or two outside the little village of Churt, on Saturday lunchtime and were instantly greeted by friendly staff and shown to our room at the top of the stairs.

Bedrooms at Bel and the Dragon Churt 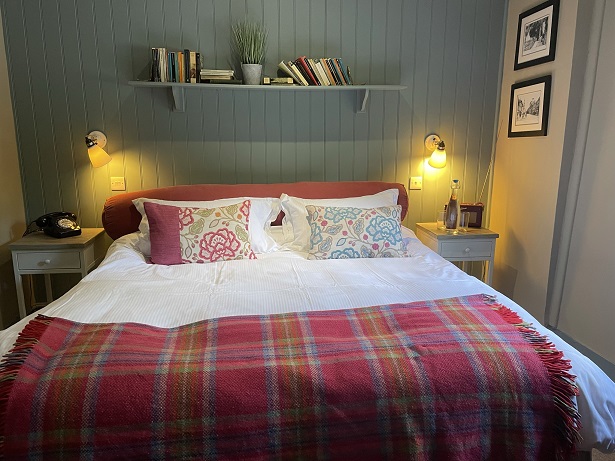 The bedroom, while not especially spacious, was decorated in bright, Scandanavian-style colours and furnishings with lovely little touches such as a well-stocked bookshelf, old-fashioned phone, complementary sloe gin and even – a first for a hotel stay – a lockable gun cabinet in one of the cupboards.

There was ample lighting, plug points and mirrors plus a kettle with tea and coffee, and the real delight came with the opening of the mirrored doors at the end of the bed to reveal an unexpectedly large bathroom with a roll-top bathroom, full-sized toiletries and colourful artwork. 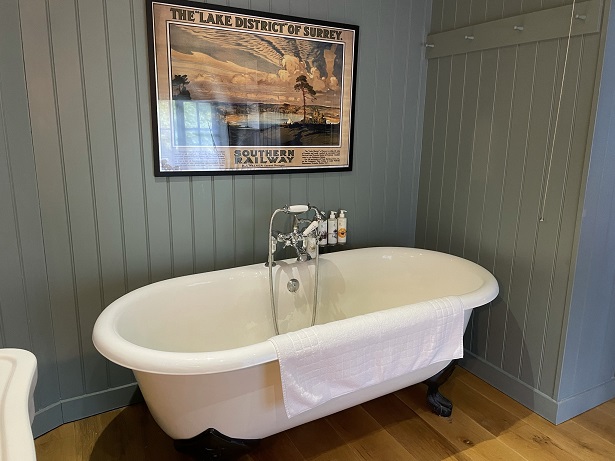 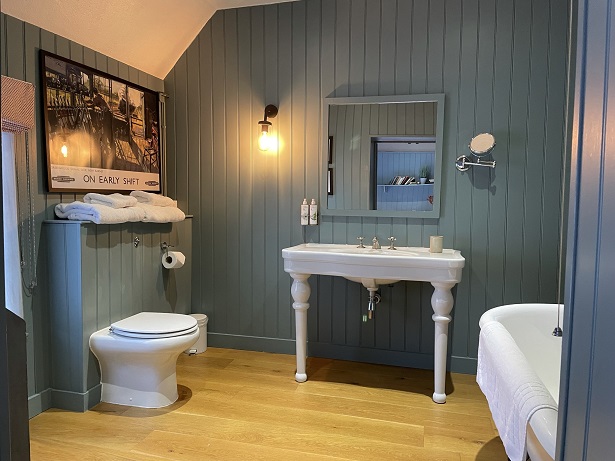 The bathroom was large, immaculate and decorated with interesting artwork

While there are plenty of walking opportunities in the area – the in-room hotel information had a helpful list of local walking routes – I was content to while away the afternoon in the sunshine at one of the Bel and the Dragon’s many tables in its beer garden, occasionally ordering another drink on the table app. Even though the pub was fairly busy, staff were doing an excellent job in delivering orders and in fact throughout my stay they were all extremely efficient, hard-working and more than up to the task. 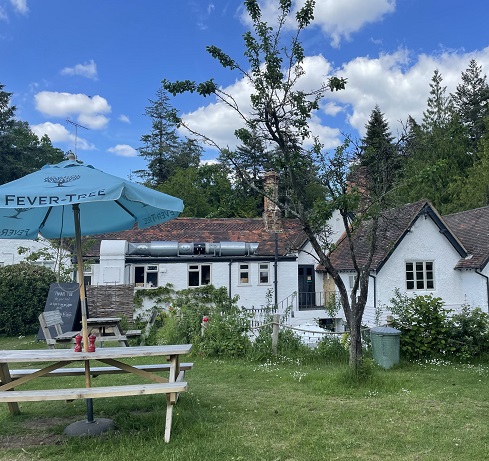 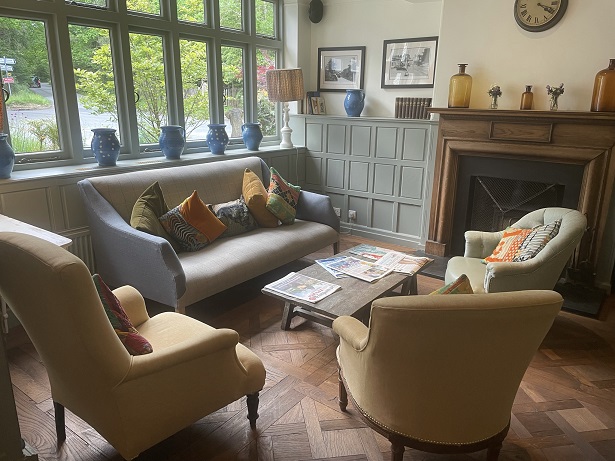 The Bel and the Dragon Churt is colourfully decorated throughout

Dinner at the Bel and the Dragon Churt

While we were tempted to stay in the sunshine forever, it seemed sensible to ration the sunshine and dined indoors in the Bel and the Dragon’s spacious bar (the restaurant was fully booked that evening but the menu and atmosphere in the bar is the same). 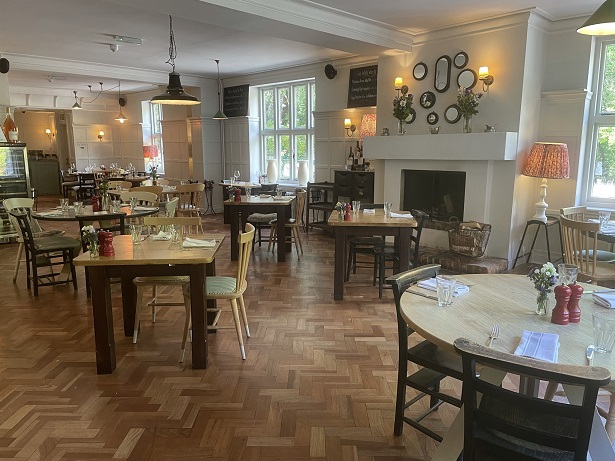 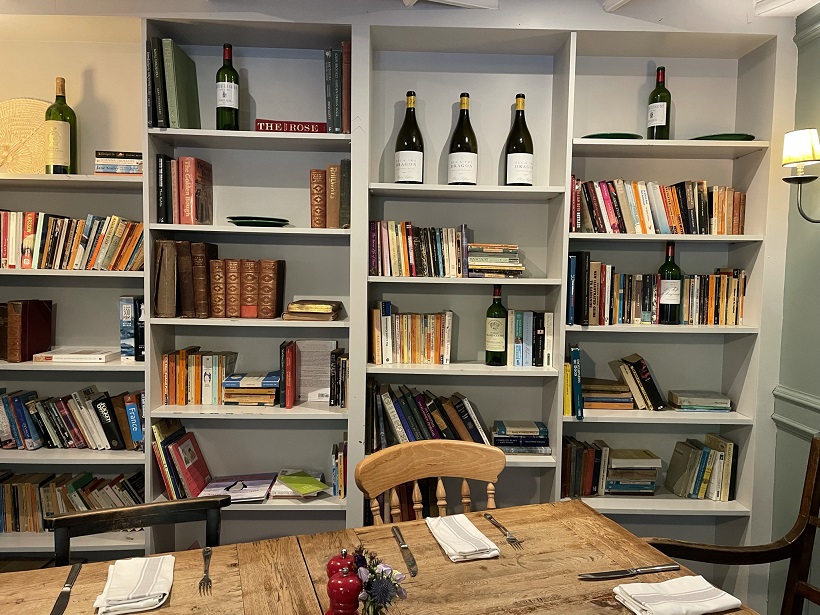 The bar is decorated with books and wine bottles

Having enjoyed some excellent food at its sister pub, Bel and the Dragon Cookham, my expectations of the restaurnt here were high and thankfully I wasn’t disappointed. My starter of creamy burrata, ruby endive and orange toasted pine nuts with parsley pesto was delicious – the burrata was well-named – and my lemon sole to follow was light and delicate, perfect for a summer’s evening. 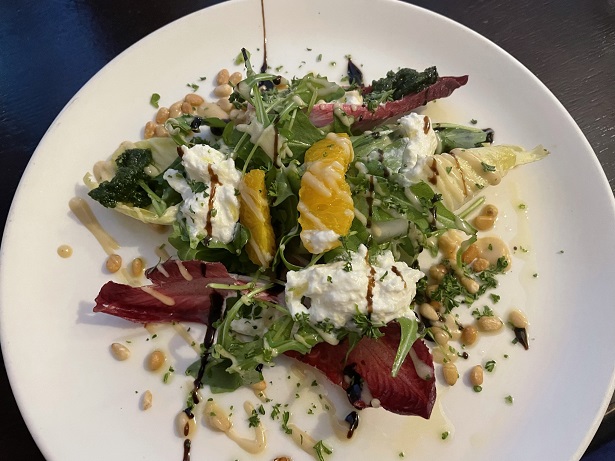 My dining companion went the opposite direction, choosing a large pot of Devonshire mussels in cider and bacon broth with crusty bread followed by succulent pig loin, belly and cheek, carrots, cabbage and crackling, and admitted later he might have over-ordered (but enjoyed it immensely nonetheless). 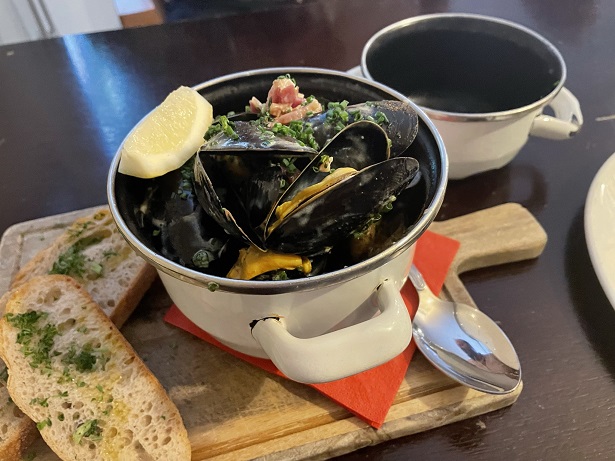 Devonshire mussels in cider and bacon broth with crusty bread 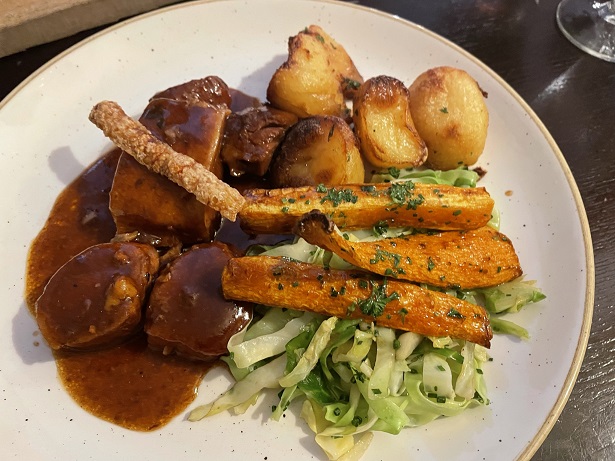 Succulent pig loin and cheek with crackling and roast potatoes 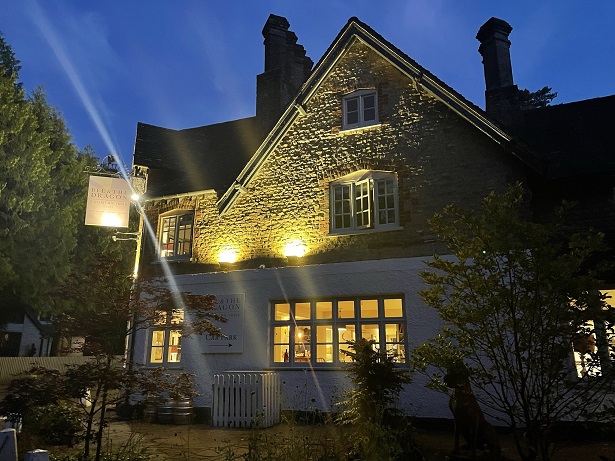 Bel and The Dragon Churt – a welcome sight day or night

After dinner we went for a nighttime walk along the dark country lanes which brought home how remote the Bel and the Dragon Churt is – there was not a light to be seen, which means it must have been a welcome sight for travellers back in the day (and is still a popular resting point for cyclists as they tackle the nearby Surrey Hills).

Back at the pub, with our bedroom overlooking the front of the pub there was a little bit of noise as people headed off into the night, but after such a pleasant meal and walk I was out like a light.

Breakfast at the Bel and the Dragon Churt 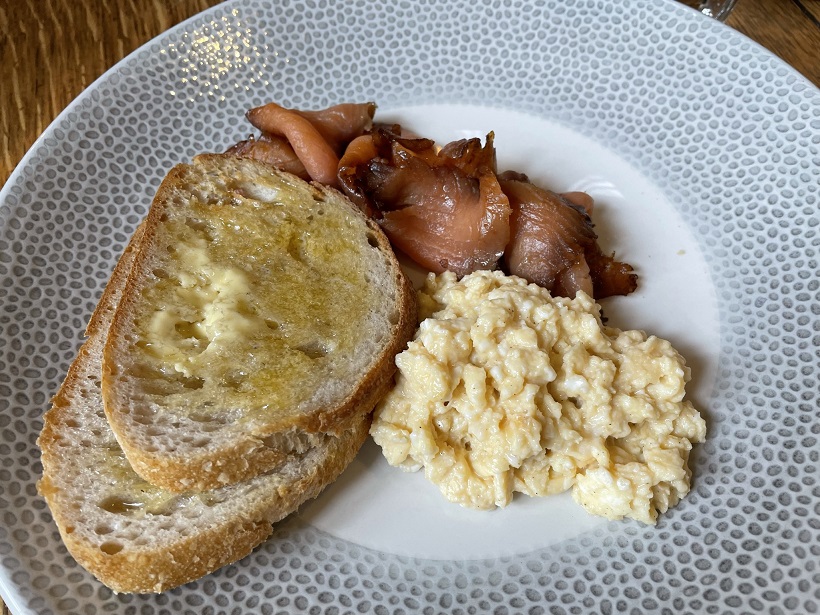 Breakfast the next day was once again, extremely efficiently and prompty-served, starting with excellent coffee and orange juice and going onto scrambled eggs and Fuller’s London Porter smoked salmon and smashed avocado with poached eggs, tomatoes and chillis on rye sourdough. There were also a selection of breakfast bowls on offer, including organic porridge, granola and Bircher museli, as well as a Kids Breakfast menu and other breakfast classics such as Eggs Benedict and full English breakfast (plus a plant-based version).

A final treat was to come with an imprompt visit to the Sculpture Park which is just next door to the Bel and the Dragon Churt (its founder, artist Eddie Powell, used to own Bel and the Dragon and came up with the great idea of transforming the unused land across the road from the pub into a destination attraction – it claims to be the world’s largest permenant sculpture exhibition). 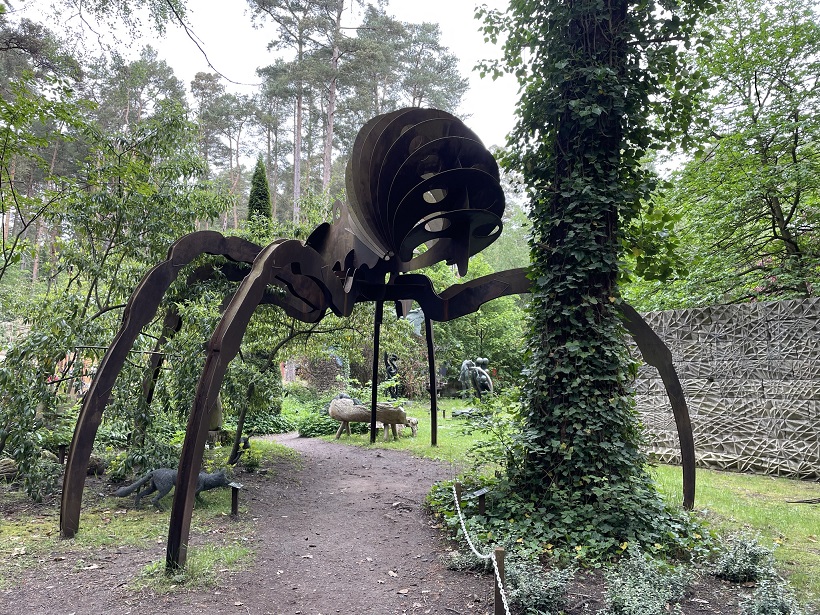 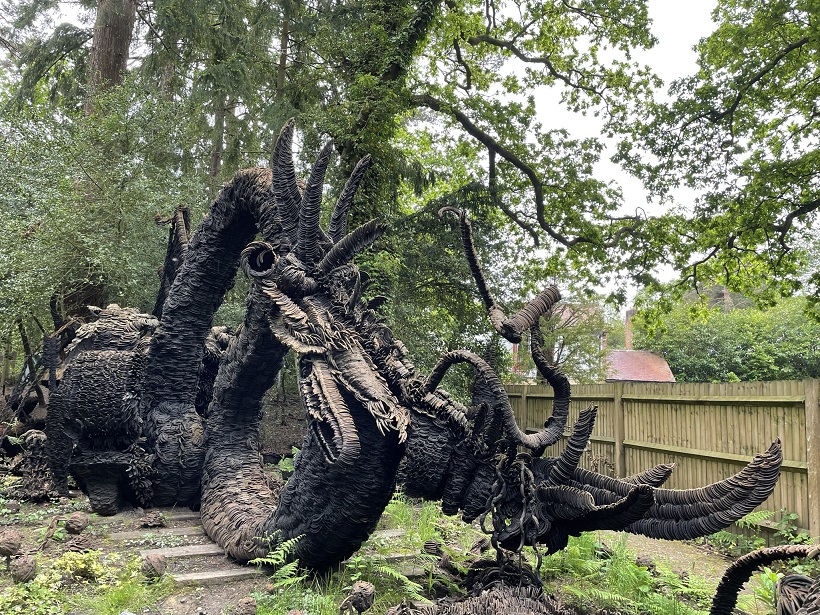 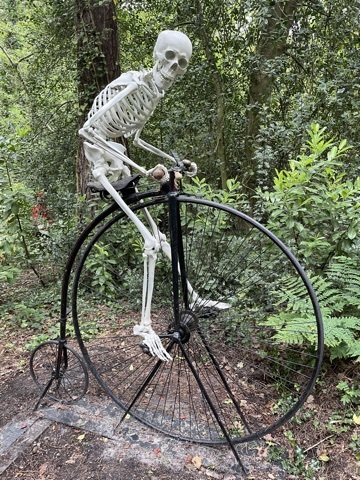 There are more then 650 modern and contemporary sculptures dotted through the 10 acres of landscaped woods and gardens which made for a very pleasant Sunday morning walk.

The sculpures themselves range from the life-like to the macabre, the cosy to the hair-raising (there were an awful lot of skeletons, created by the owner himself under the pseudynom Wilfred Pritchard) but I liked the epic dragons and cute birds) and even non art lovers will enjoy trying to guess how much their favourites sculptures are worth.

They are all for sale, with the largest works fetching tens of thousands of pounds and I was told that while the park usually sells one a week, Covid had increased that to one a day as people looked to improve their gardens.

Heading off home after a pleasant break, it was great to be able to unwind in such pleasant surroundings and all credit to the staff who looked after everyone so well under the expert eye of Jann, the general manager. Having now tried out the Bel and the Dragons in Churt and Cookham, it won’t be long before hopefully I’ll be able to try out the rest of the set.

Hotel information and to book Bel and the Dragon Churt

Check the latest availability at Bel and the Dragon Churt

If you like reviews of great pubs with rooms then check out these excellent staycation ideas: The Crown and Castle Orford: a Suffolk spot of food heaven; A relaxing stay at the historic Spread Eagle hotel in Midhurst; Relaxing in grand style at The Hare and Hounds near Tetbury; Exploring the Cotswolds from the Bear of Rodborough, Stroud; The Bull at Sonning, a perfect example of a great British pub