To say that the UK restaurant industry is in trouble is putting it mildly. Lockdowns due to the pandemic have seen bars and restaurants shutting up shop – many for good. But to generate much-needed revenue, restaurants all over the country have been putting together ‘at-home’ restaurant kits, enabling hungry punters to eat restaurant-quality dishes without leaving the house.

Contents hide
1 What’s in the Northcote’s Gourmet Box?
2 Preparing the first course
3 Onto the soup
4 The main course
5 And finally, dessert
6 So – what was the verdict?
7 Hotel information

The theory is simple: the chefs do all the fiddly stuff for you, so all that’s required is a sear here and a warm-through there and dinner is served. For my first restaurant-at-home box, I aimed high: Michelin-starred Northcote in Blackburn, Lancashire, run by executive chef Lisa Goodwin-Allen, familiar to viewers of BBC’s Great British Menu. 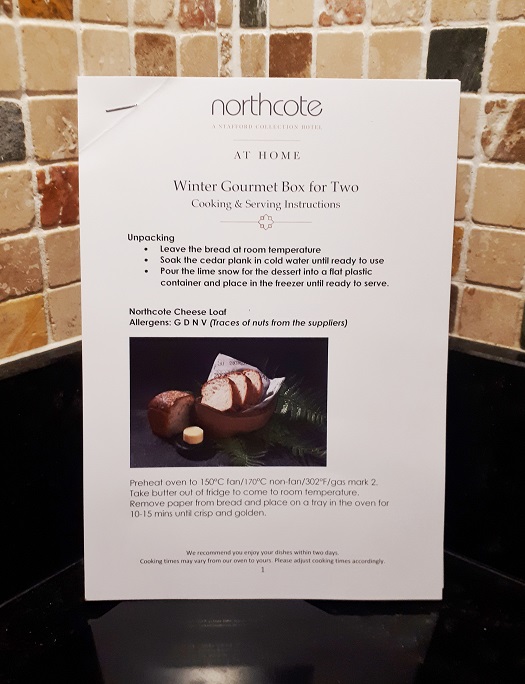 I’ve worked in the hospitality industry previously (as a restaurant reviewer, not actually getting my hands dirty in the thick of service), and I’m aware of the gulf between restaurant cooking and knocking up something to eat at home. There are so many extra steps chefs take that we don’t have the space and time for, quite frankly, such as stockpots bubbling away 24 hours a day, making demi-glace reductions and owning a ludicrous number of miniature copper pans.

What’s in the Northcote’s Gourmet Box?

Northcote’s January offering was a four-course affair, also including a loaf of homemade bread and post-dinner chocolates, at £105 for two people. It was delivered promptly to my door and contained an impressively large selection of boxes, packets, tubs and pots, all clearly labelled. 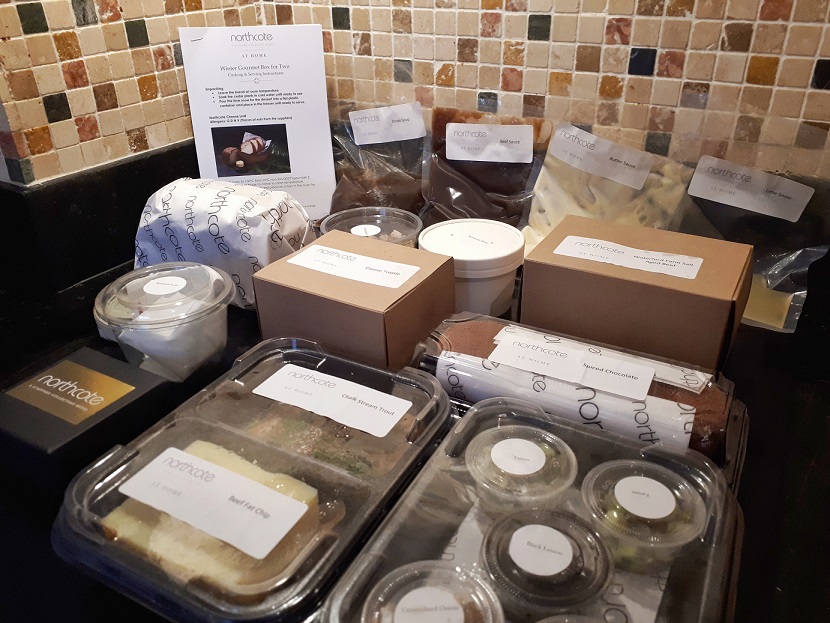 After enjoying Northcote’s signature Lancashire Cheese Loaf, the first course to be prepared was ChalkStream trout served on a cedar plank with warm tartare sauce and ‘black lemon’. Soak the cedar plank for an hour or so beforehand so it doesn’t scorch in the oven, warm up the trout and the sauce, and that’s it – the cedar plank means the trout is infused with a lovely woody flavour as it cooks. 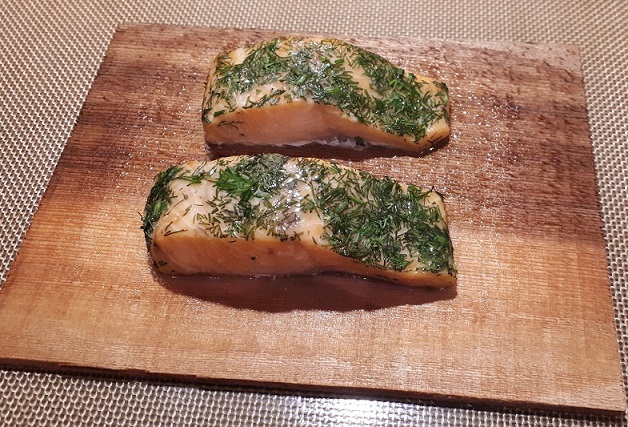 The result was superb, and the star of the show. The dill-topped trout worked superbly with the rich butter sauce enlivened with capers, cornichons and lemon. 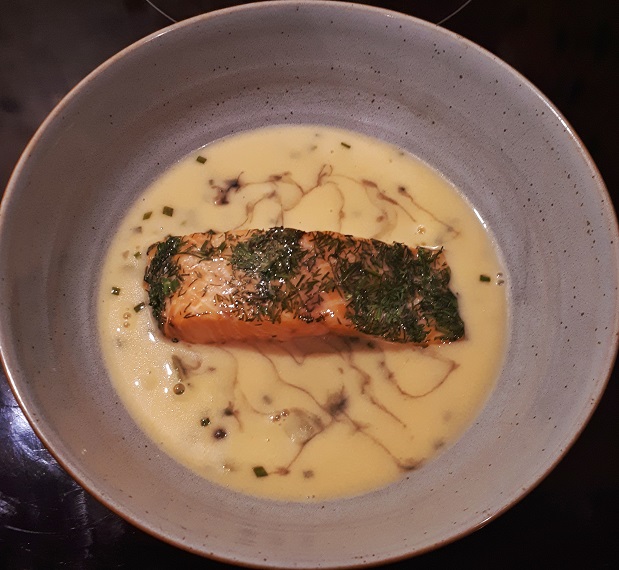 Next up was ‘French-style’ English onion soup with a Black Cow Cheddar cheese toastie. As much as I love onion soup I lack the patience (and resilient tear ducts) required to finely slice a kilo of alliums. The soup was suitably dark, rich and earthy, embellished with a sprinkling of slow-cooked caramelised onions that you mix in. The accompanying toastie was the highlight – filled with piquant Cheddar and sprightly spring-onion mix that really packed a punch. 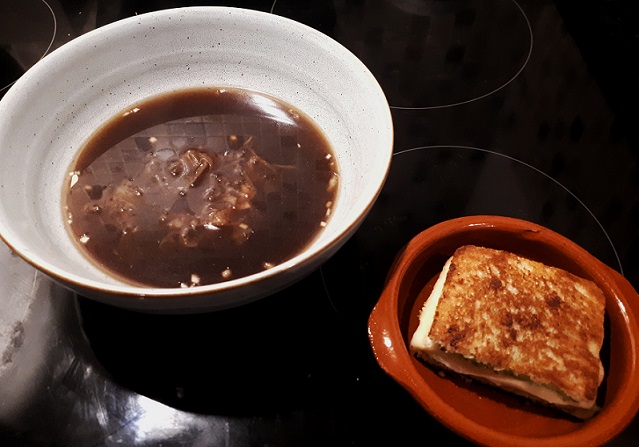 The main event pulled out the big guns: a slab of Waterford Farm salt-aged fillet of beef, with marrowbone crust, smoked pancetta and mushroom bourguignon and a beef fat ‘chip’ (which resembled a neat block of dauphinoise potato). This was the one course that required the most cooking, but it was straightforward stuff: sear the beef, 10 minutes in the oven, roast the chip while the meat is resting and warm through the sauce. Fillet is not normally a cut I go for – I’m more of a rib-eye man – but the quality of the meat was superb, and the extra touches such as the marrowbone crust and mushroom purée really made the dish. 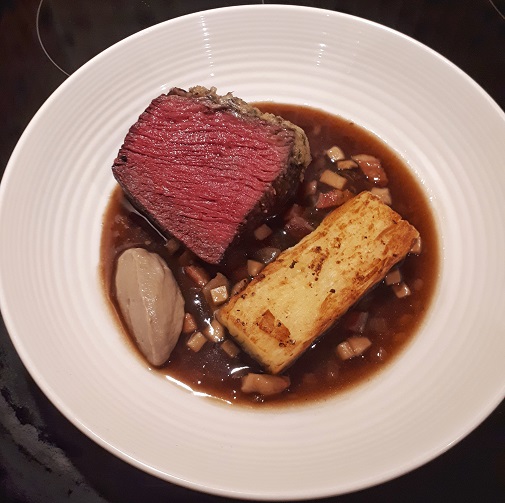 The dessert was inspired by Goodwin-Allen’s triumphant entry in the festive edition of Great British Menu – a snow globe comprising spiced chocolate, hazelnut and lime. The delicate sugar-spun globe was always unlikely to survive the rigours of the postal service and courier companies, so wisely it was replaced by a colourful rainbow decorative garnish. The spiced chocolate component was delicious, as was the caramelised hazelnut garnish, but the lime ‘snow’ (a granita that you ‘shave’ over the dessert) rather drowned it, and melted as quickly as actual snow, making slick service rather tricky. 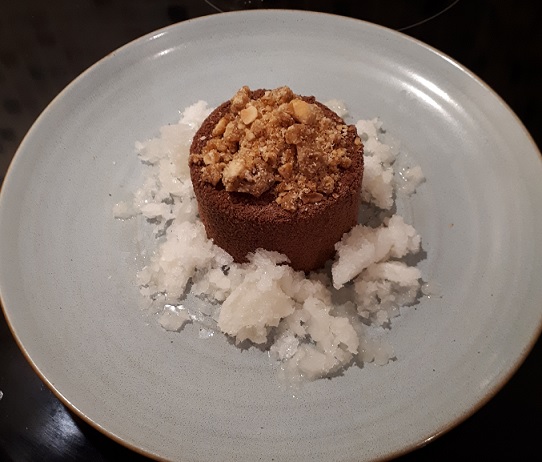 So – what was the verdict?

Overall, just over £50 a head for food of this quality is very good value. Creating this menu from scratch yourself would involve many hours of food prep and enough washing-up to fill a sink or three. The other bonus is that you don’t really have to be able to cook – it’s more of an assembly task – but if you love to cook at home, as I do, I found it enormous fun to create Michelin-starred dishes from the comfort of my own kitchen. 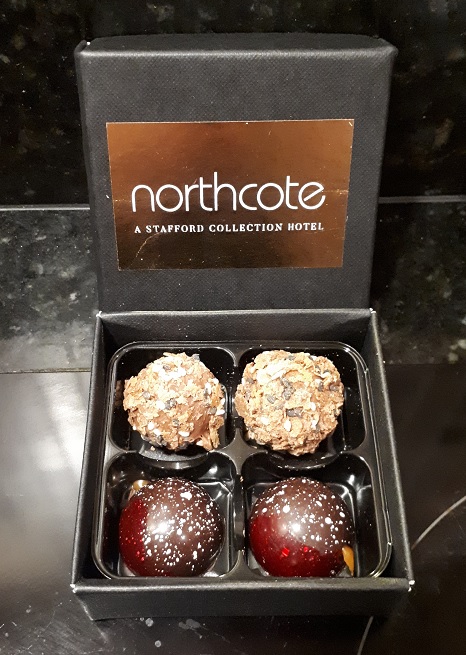 Have you tried any restaurant kits at home? Do share your favourites and recommendations in the comments!

Check out my reviews of other luxury hotels with Michelin-starred restaurants: A luxurious foodie stay at Gravetye Manor, a West Sussex gem; A stay at St James’s hotel and spa in the heart of London; Hambleton Hall Rutland: warm, welcoming and wonderful food; Whatley Manor hotel and spa – one of the best hotels in the Cotswolds; Hampton Manor hotel: top-class food and a step back in time;