The view from the top of the five star luxury hotel ME London is a tourist’s delight, taking in the essential sights of London, from the London Eye to Big Ben, St Paul’s, Tower Bridge, The Shard and everything in between. Having evening cocktails on the Radio Rooftop bar in the sun, however, feels like you could be in a bar thousands of miles away – Las Vegas, for example, or Dubai rather than in a one of the top luxury hotels in London.

[Note: my review of luxury hotel ME London was first published in 2016 and so some of the details might now be out of date]

Rooftop bar at ME London

The 157-room ME London hotel, designed by acclaimed architects Fosters + Partners and part of the Spanish Melia Hotels International chain, also has two restaurants and a lobby bar in its central London location on The Strand, but it is its rooftop bar which really stands out. Drinking in London is usually such a ground level experience (often below ground) that it’s a shock to be 10 storeys up in the sky, in the sunshine. It feels exotic, which isn’t usually the case when you go for a mid-week drink. 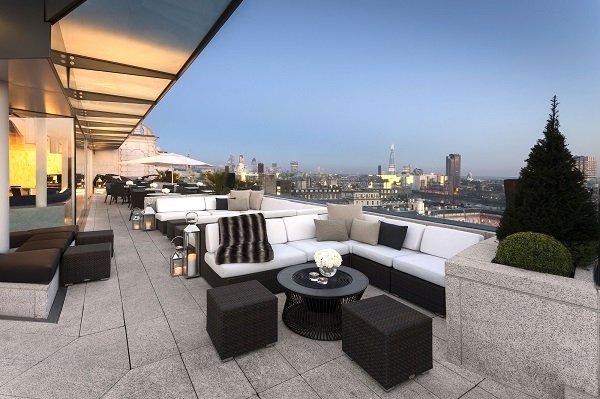 On previous occasions I’d been put off by the scary clipboard-wielding door staff who were extremely reluctant to let anyone in, but this time round everyone at the Radio Rooftop was ultra-friendly, from Jonathan the fabulous bar manager, to the longest-serving member of staff Renato and various others who showered us with cocktails. I was reviewing it of course, so they could have been on their best behaviour, but the way they were meeting and greeting other drinkers and rushing around fulfilling orders implied that this was the new, friendlier way of doing things. 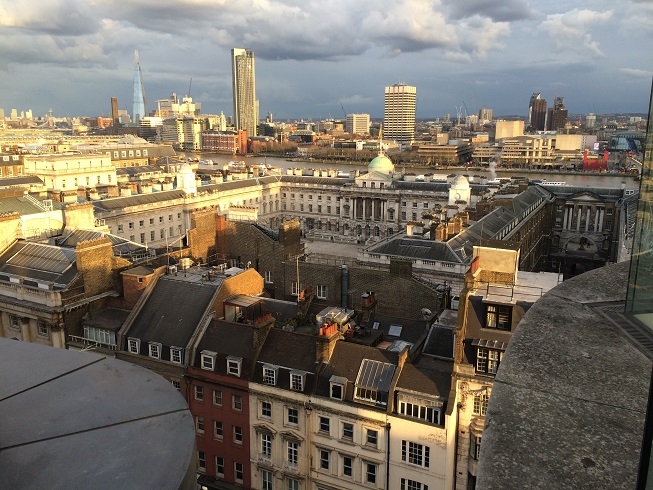 From our table we could see all the way to the Shard and Tower Bridge, and over to the Houses of Parliament and Big Ben in the other direction 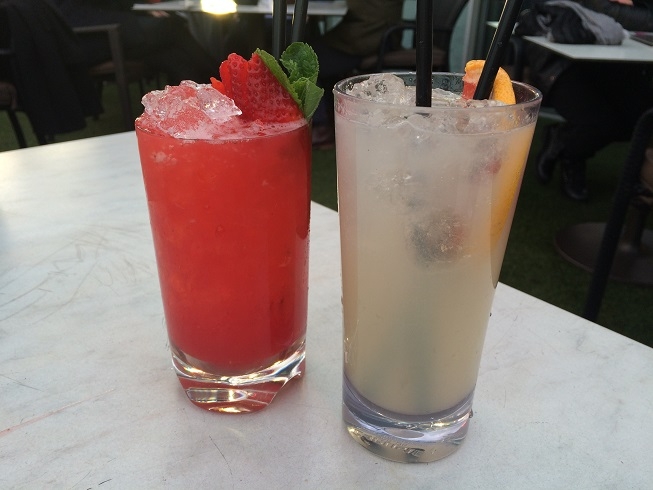 Bedrooms at ME London

We’d already checked in earlier in the afternoon and our room, like the cocktails, could not be faulted. Classed by the hotel as a ‘Chic Suite’, it was right at the front of the building on the eight floor with the bedroom shaped like the prow of a boat and with amazing views down the Strand towards Charing Cross.

There was a separate lounge with a sofa, desk and massive TV, two loos, an immaculate bathroom with two sinks and lots of lighting, a walk-in shower, the biggest bath I’ve ever seen – it was like a flotation tank – and a lot of storage space. 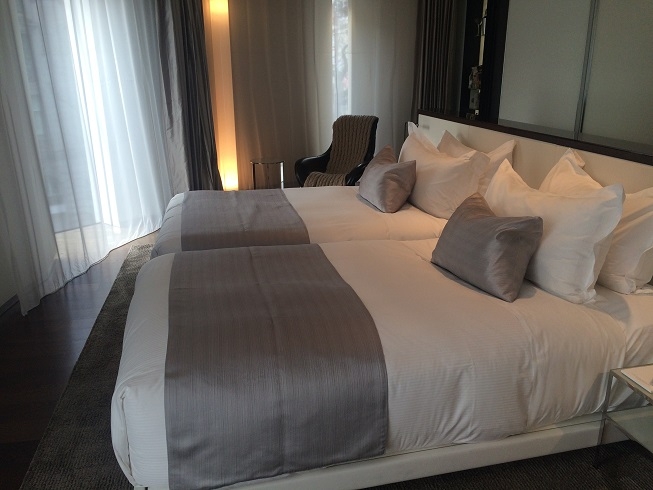 Our room was great, very smart and luxurious, with a curved bedroom which felt like the prow of a ship 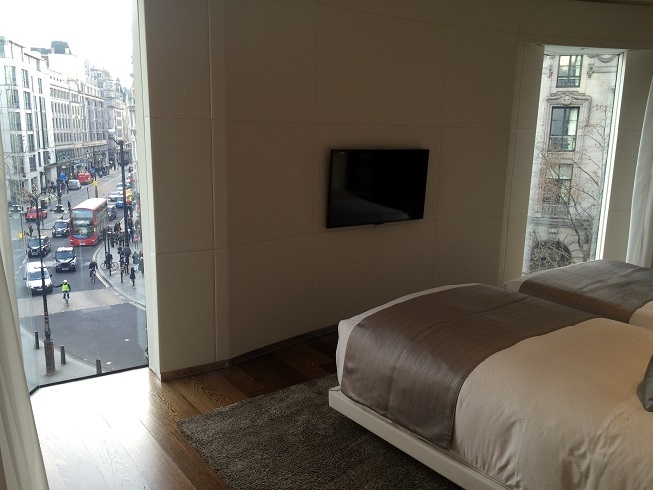 The view from our bedroom was directly down The Strand 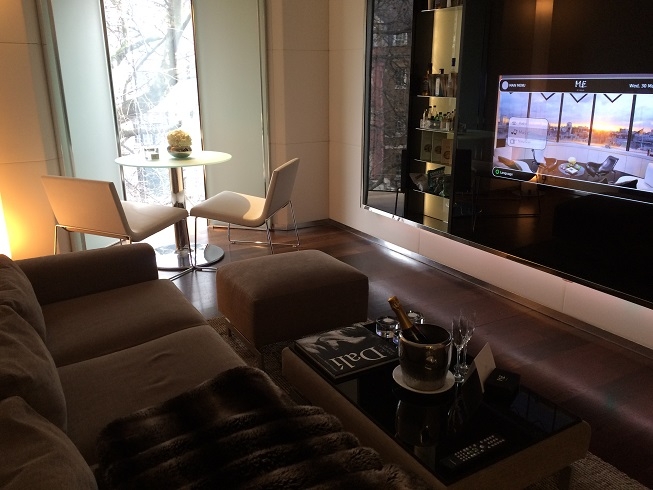 The separate lounge with some more great views

There were lots of nice touches, such as the cocktail-menu postcards in the well-stocked minibars so you could mix your own drinks, an excellent turndown service which included lighting dozens of tea lights just before we returned to our room, plus extra water, towels, chocolates and so on. There was also a great selection of bathroom toiletries and excellent lighting everywhere.. 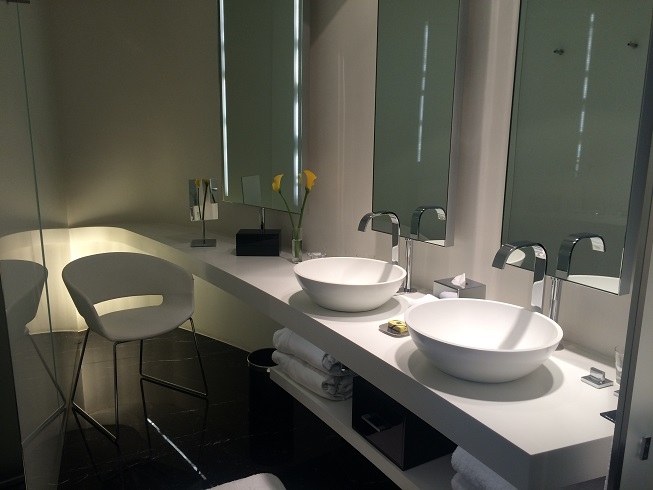 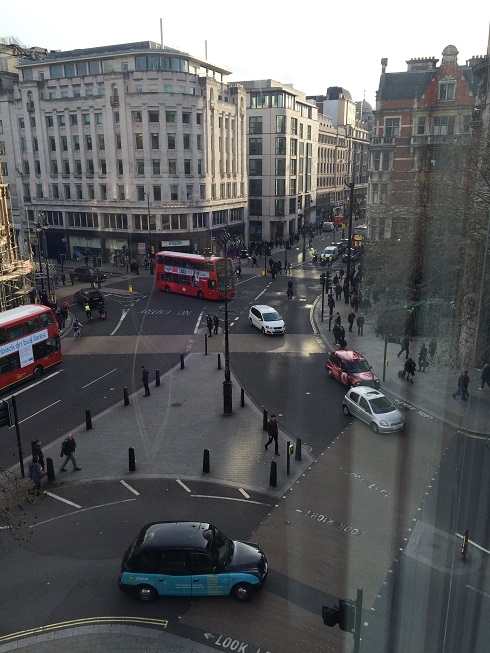 The view down The Strand from our bedroom window

The restaurant at ME London

Having worked our way through a good part of the Radio Rooftop bar drinks list, from the signature Thames River Island Tea (with gin, vodka, Bacardi and peach liqueur), Summer Nights and South Pacific drinks, it was with some reluctance that we headed down to dinner at the hotel’s restaurant on the ground floor, which is the US chain STK, owned by ME London’s parent company The One Group. 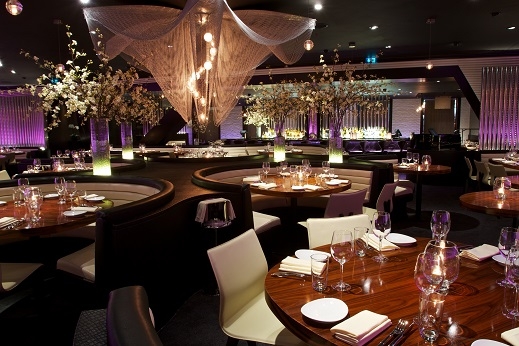 The seared scallop Caesar (which is actually a main but after a lot of debate I was allowed just a starter portion) was passable, while the crab sliders looked better than they tasted. My steak was way more than medium-rare, and was almost totally tasteless and my dining companion’s glazed spiced venison loin had to be sent back to be reheated but was much improved for the trip. 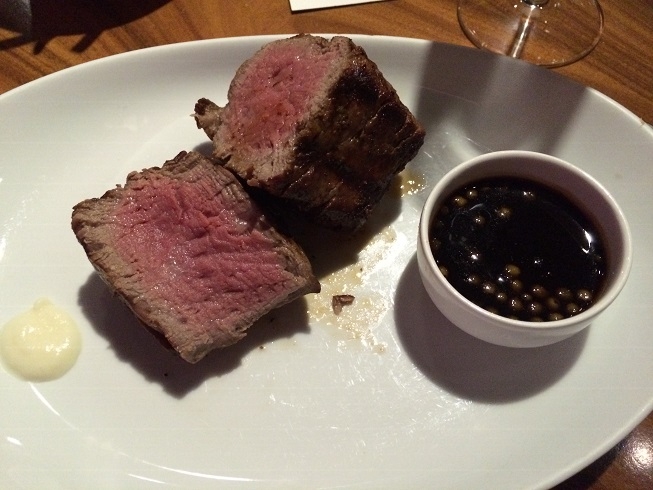 My steak – sadly not very tasty or inspiring

The chips were doughy rather than crispy, the broccoli was also tasteless, and the lobster mac & cheese (a hefty £14) was, like the bread, completely infused with blue cheese, thus obliterating the lobster. What was it with the chef and blue cheese?

A dining experience straight out of Vegas

I can only assume that the restaurant is not going for the foodie crowd but the fun-night-out crowd, as most of our fellow diners were ignoring the food entirely in favour of endless selfies and more alcohol. If that’s the case, STK is going to be fine – the place, decorated as if it had come straight out of Vegas, all black and cream banquettes, curved seating and dramatic lighting, was packed. (Also like Vegas restaurants, the loos were miles away, back in the hotel lobby and down two flights of stairs. ) 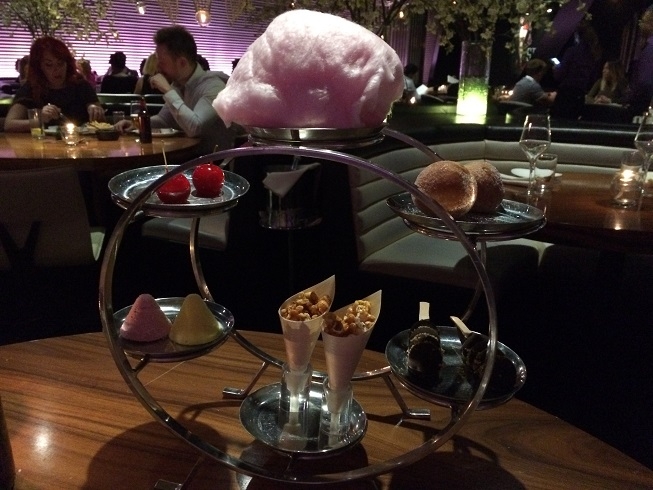 The Fairground dessert was inventive and fun

The only fun and passable bit of the meal was the Fairground dessert with toffee apples, marshmallow, candy floss and popcorn, which was suitably sweet and cheerful and certainly looked the part. We fled back to the bar for a nightcap. 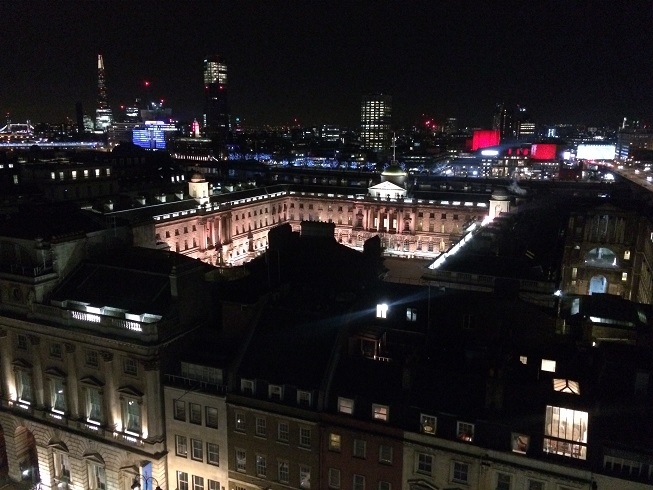 The night time view from the rooftop bar

Breakfast at ME London

After STK, breakfast the next day at ME London’s other restaurant, Cucina Asselina, was a far more palatable affair, with a large buffet and range of cooked breakfasts, and would be a good place for early-morning business meetings. 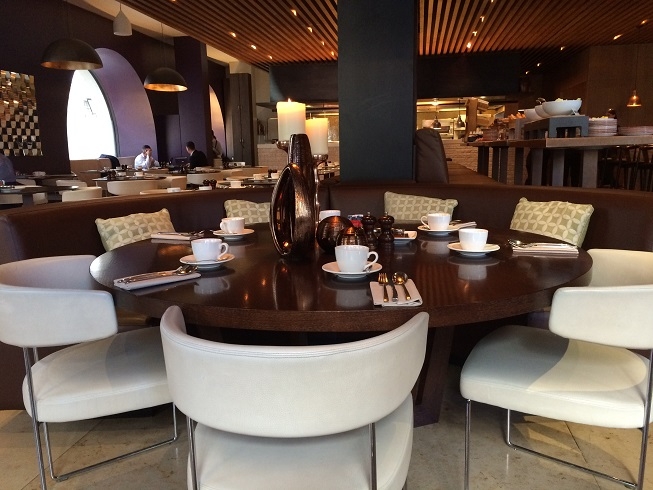 The hotel’s other restaurant, Cucina Asselina, was a pleasant place for breakfast 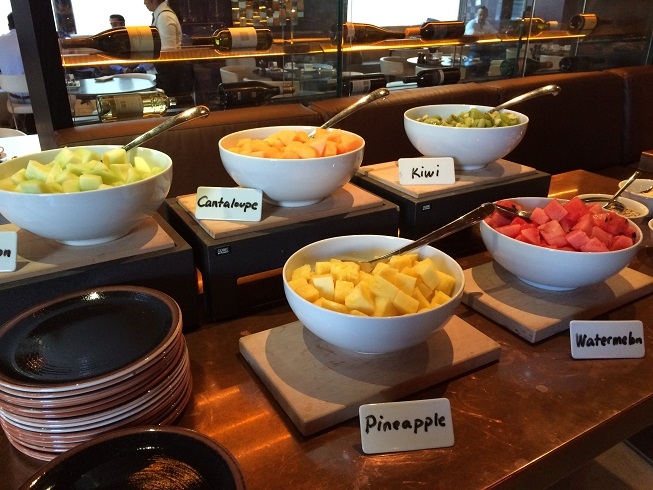 Afterwards Guillame showed us round the hotel which was rather impressively built around a massive hollow pyramid which begins at the first floor lobby and goes all the way up to the Radio Rooftop bar – the pyramid gets smaller and smaller the higher the floors are, and its interior walls have swirling images projected on them in the lobby at night. 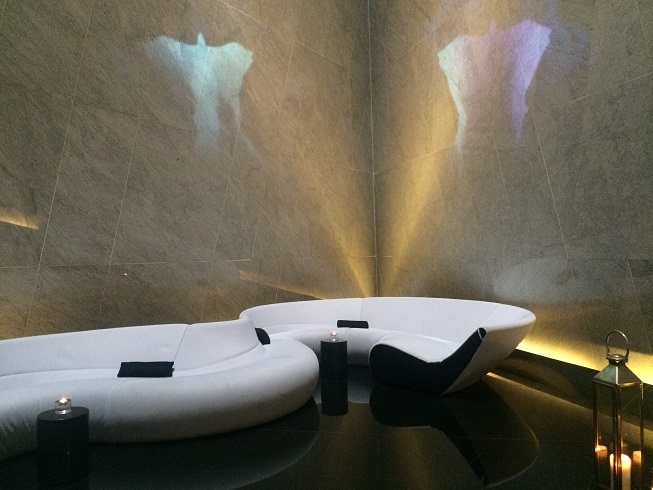 Some of the more swankier rooms in the hotel (there are 157 in total, including 16 suites) have terraces overlooking The Strand, and the hotel’s Penthouse is on two floors, the top floor a lighthouse-style glass box overlooking the whole of London and with a door straight out onto the rooftop bar. Back at the bar again! This will definitely be one of the best places to have a drink over the summer – and thankfully they do food up here too.

Hotel information and to book ME London

Check availability and book ME London by clicking here

If you like reading reviews of luxury hotels in central London then you’ll love reading:

The Gore Hotel London: history, luxury and some rock and roll cocktails

A stay at St James’s hotel London: Mayfair luxury with a Michelin star