Just when you think you’ve stayed in the best hotels in the Cotswolds, along comes Whatley Manor hotel and spa luxury hotel and tops the lot. From the moment the gates opened to reveal a beautiful cobbled courtyard, the entrance garlanded by wisteria and lavender, Whatley Manor didn’t disappoint in any way.

A luxury stay at Whatley Manor hotel and spa

Whatley Manor, located in Wiltshire countryside near Malmesbury, is certainly not a budget option, but there are few hotels who can offer a luxury spa, private cinema, two Michelin-starred restaurant and acres of beautiful gardens and maintain such a high quality of service throughout, which means a stay here is more than worth it. 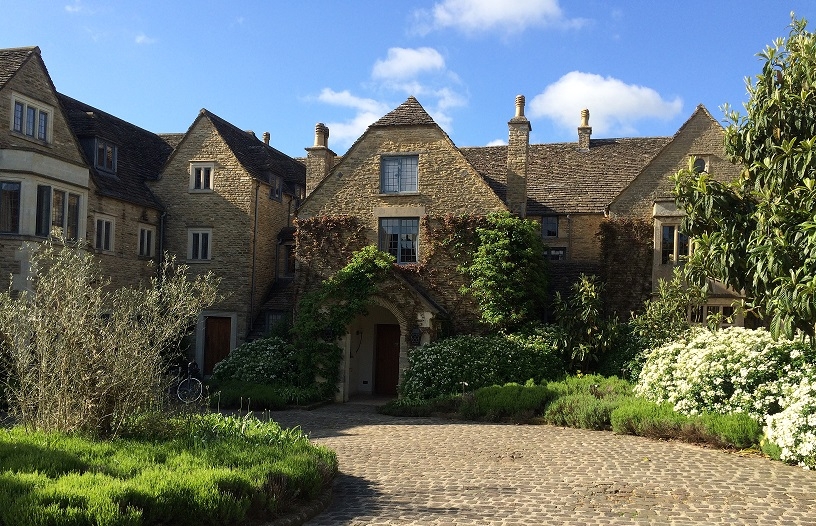 The entrance to Whatley Manor is in a beautiful courtyard

The drive into the courtyard at Whatley Manor hotel and spa sets the scene for a memorable stay; the large wooden gates sweep open for you as you approach, as if welcoming you in to a secret world. Staff miraculously appear out of nowhere to welcome you, take your bags and valet-park uour car, and you know that a very indulgent stay has begun.

There is a lovely country house feel to the hotel, with its stone floors, mullioned windows, sprawling grounds and little touches here and there, from chess boards set up ready to play, wellies to borrow and cosy sofas dotted all around. Bedrooms, many of which overlook the lush garden terrace at the back of the hotel, are immaculate and managed to walk the line between modern luxury and classical English charm with style. 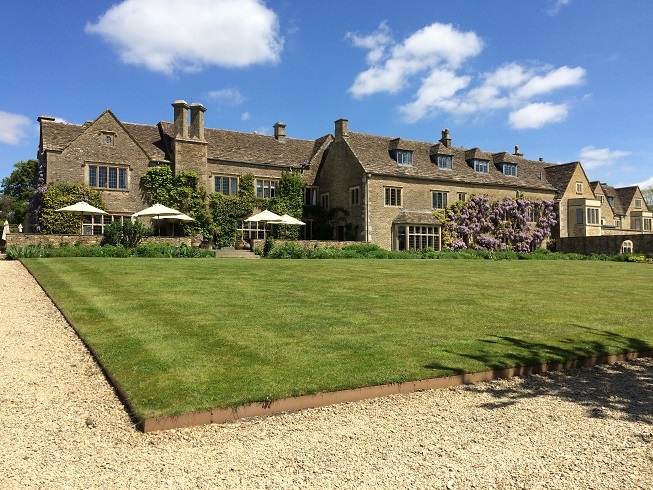 The hotel is surrounded by lovely gardens and terraces

General manager Sue Williams was previously at the grand Cliveden House hotel, and her experience of running luxury hotels shines through at Whatley Manor in a beautifully understated way.

Built in the 19th century, Whatley Manor became a hotel in 1987 and is now owned by hotelier and keen equestrian Christian Landolt, but still has the feeling of a grand home – although the private cinema and a high-end spa make it a cut above your usual manor house. Downstairs is surprisingly large and spacious for a hotel with just 23 suites and rooms – there was a large central lounge off which was a light and airy drawing room, another lounge and an adjoining bar. Most of the rooms led outside, either to a broad terrace, overlooking the gardens and bordered by a trickling water feature, or to a courtyard where there was an abundance of cosy chairs, or to a little ornate walled garden.

While you might just want to spend your stay at Whatley Manor exploring the grounds, curled up on one of the many comfy sofas with a good book or sampling the delights of the cocktail bar, there is a first-class spa for those seeking a more physical type of pampering.

Whatley Manor’s Aquarius spa can be reached from the hotel or across the ivy-clad courtyard and is the kind of spa you want to devote some serious time to. 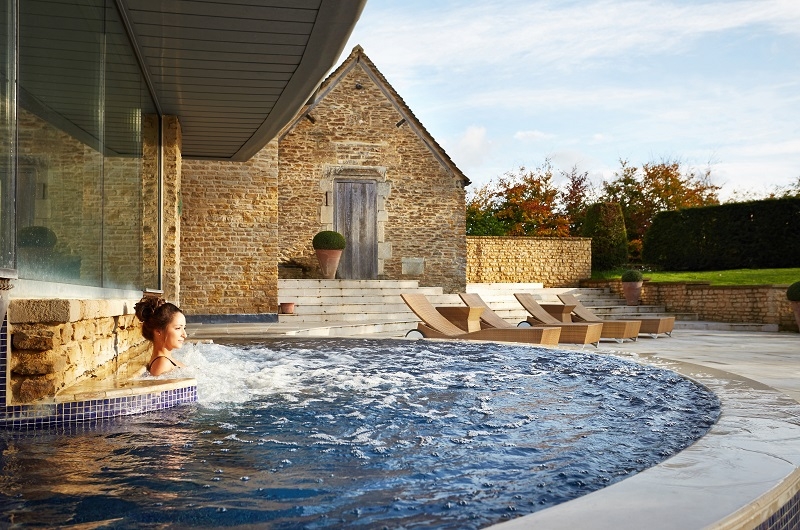 The spa’s central hydrotherapy pool is both indoors and out, and there are ample loungers for relaxing

The spa at Whatley Manor

Much bigger than it seemed on first impression, the spa includes a whole range of pampering options and a lovely outside space where you can sunbathe surrounded by Whatley Manor’s beautiful gardens. There’s a central, vast indoor/outdoor hydrotherapy pool where jets spring into life at set intervals, there’s a range of sauna and steam rooms which you can work your way through, increasing in temperature each time, there are salt scrub showers where you fill a wooden bowl with sea salt and get scrubbing, there’s a floatation pod and even a ‘Natura Bisse Treatment Bubble’ which boasts has 99.995 per cent pure air which is supposed to rejuvenate and purify.

I can’t vouch for the scientific effects but it was certainly different and very pleasant having a spa treatment in a big white inflatable bubble (I had the excellent D-Stress (60min/£90) facial and massage) and afterwards there were heated stone loungers in the tepidarium to snooze on. 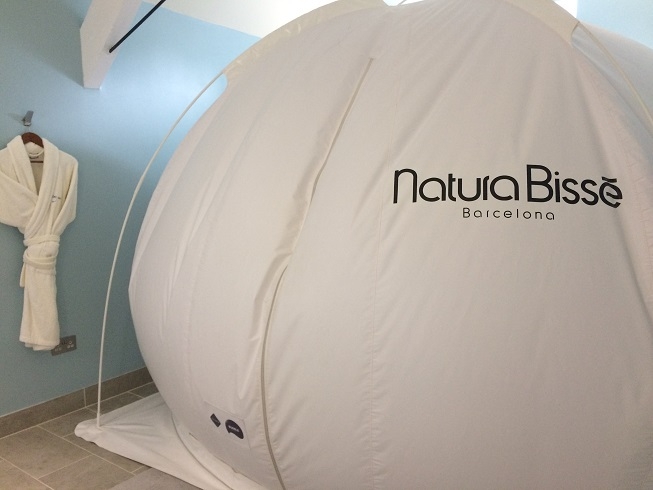 After a through afternoon pampering, I floated back to our bedroom which was up a tapestried staircase. It had a separate lounge, views over the terrace and gardens at the back of the hotel and a rather impressive sunken bathroom, reached via a secret door behind a sliding bookcase in the bedroom. [Note: the bedrooms have since been completey updated and refurbished so I’ve included recent pics from the hotel of its new bedrooms). 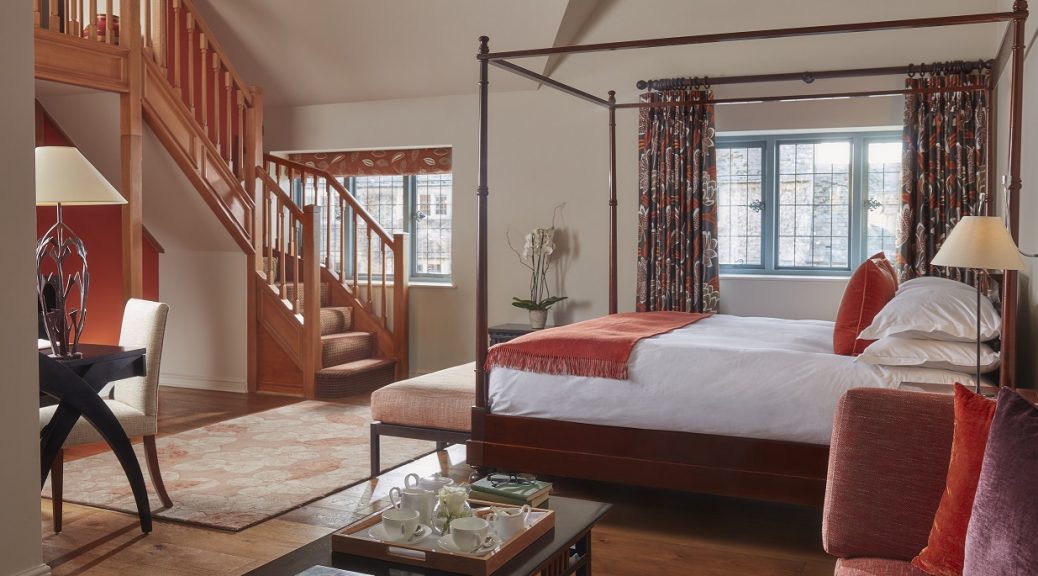 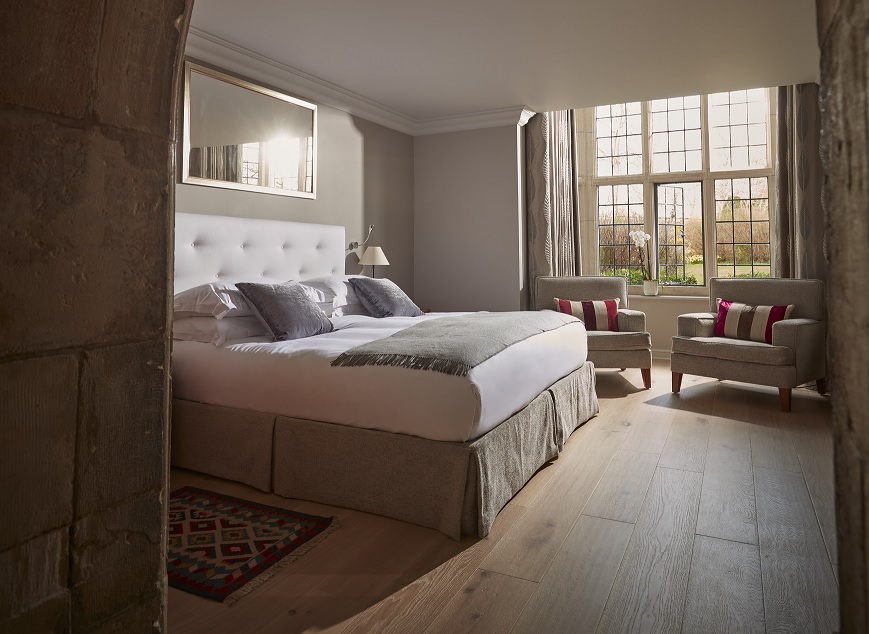 The new-look suite 2 at Whatley Manor 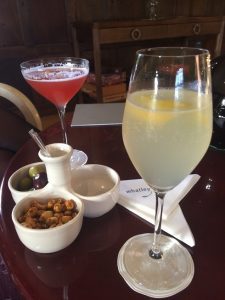 Our pre-dinner cocktails: a French 75 and a Millionaire

The bar and restaurant at Whatley Manor

Pre-dinner cocktails at Whatley Manor are always a treat and this stay was no exception, with the stand-out being the Millionaire (Mount Gay Black Barrel Rum, apricot liqueur, sloe gin and lemon juice).

While relishing our drinks we were presented with the menus for the night’s main event: the epic Chef’s Meny chef Niall Keating which can come with one of three wine flights to accompany the meal. Since my stay the menu has been thoroughly updated so do check the latest menus  but if my experience was anything to go by, you are in for a real treat.

The quality of the food couldn’t be doubted and particularly memorable was the very first course, served in the lounge with our cocktails; it was a fantastically fluffy concoction of spiced cracker and crispy shrimp which exploded all over the table (and me). 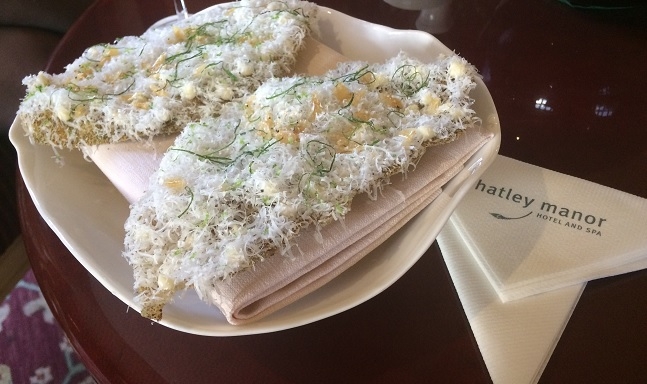 ‘A fantastically fluffy concoction of spiced cracker and crispy shrimp’ 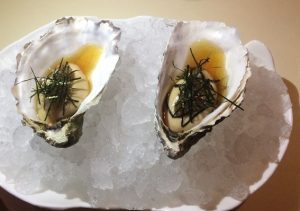 It was followed – once we were seated in Whatley Manor’s Dining Room restaurant – by oysters with seafood mignonette, which were in turn followed by moreseafood dishes such as marinated salmon roe with egg white custard, mackerel with preserved raspberry and salted cucumber, and scallops risotto with chorizo. 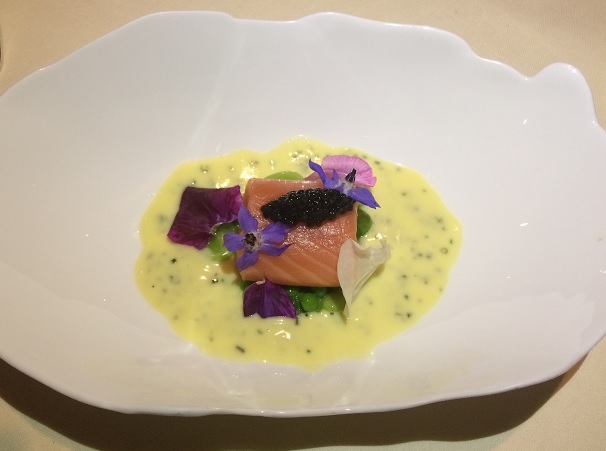 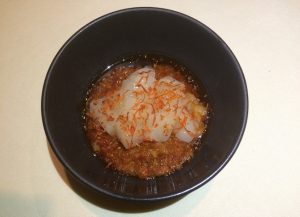 The oysters and second salmon dish (above) were both excellent and undoubtedly technically impressive and the service and wine suggestions which ranged from Slovenian Pinot Bianco to Italian Lagrein and a 2010 Sauternes were top notch throughout. 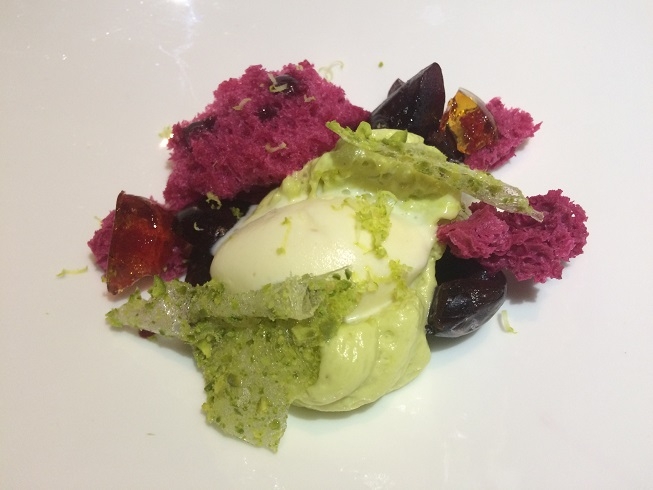 After a dreamless sleep – the bed was extremely comfortable – and an excellent breakfast which had everything you’d hope for in a country house hotel – terrific bacon, sausages and black pudding as well as other more inventive options such as crepes with orange honey – there was just time for a stroll around Whatley Manor’s gardens, which range from the cultivated kitchen garden to more sprawling wildflower beds, with unexpected walkways and beautiful water features hidden at every turn.

There are  maps at reception showing the way down to the fast-flowing river at the bottom of the gardens, or to the gazebo at the top of the hill with fairy lights and hanging chairs. We didn’t see another person on our stroll, and it was so beautifully quiet and tranquil that we could have been miles from anywhere, rather than just 20 minutes from the M4.

Whatley Manor’s 12 acres are full of unexpected delights, such as this water feature with a portico

If the weather isn’t suitable for a country stroll then there is a also a 40-seat private cinema for guests to hire which does monthly screenings. 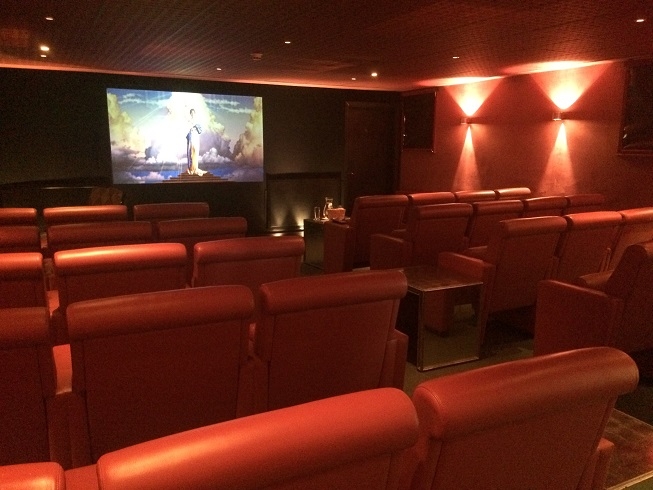 Whatley Manor often has screenings and events in its private cinema

Afterwards as I reluctantly prepared to leave, I was struck by the huge attention to detail shown by the owners and hotel directors. The hotel isn’t cluttered at all but from little hedgehog bookcases and mouse-doorstops, to massive pot plants under stairwells and an abundance of cosy sofas, you feel as if a lot of love and thought has gone into the hotel.It was a delight to return to Whatley Manor and a wrench to leave – it remains one of my favourite Cotwolds hotels. 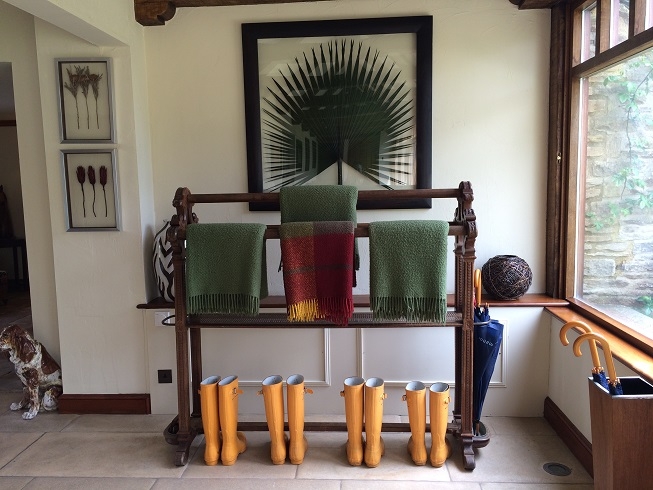 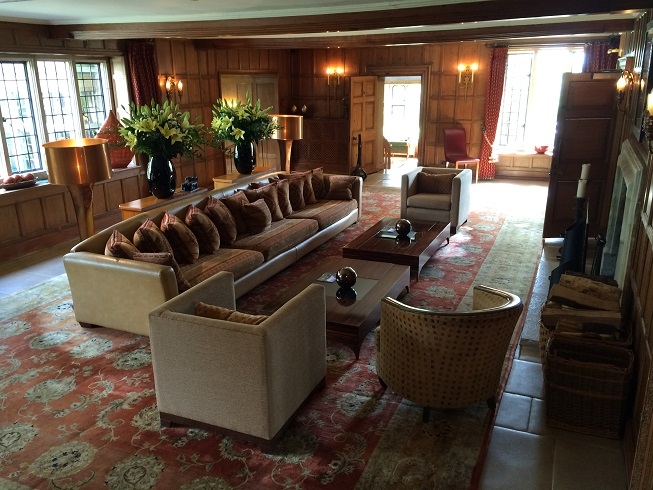 One of the downstairs lounges at Whatley Manor 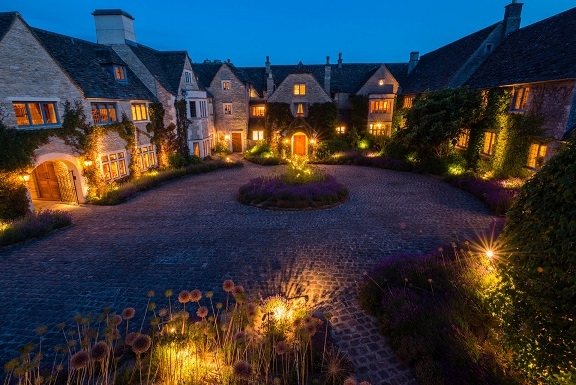