Last week, at home, I had some of the best bread I’d ever eaten. It was a soft, brown loaf and tasted marvellous. Was it the ingredients, I wondered – organic wholemeal stoneground flour. Or was it the fact that I’d made the whole thing myself, under the expert guidance of the River Cottage cookery school? Either way, it taught me two things: one, that there is something really special about eating something which you’ve created from scratch, and two, there’s no way I’m ever buying a shop-made loaf again. 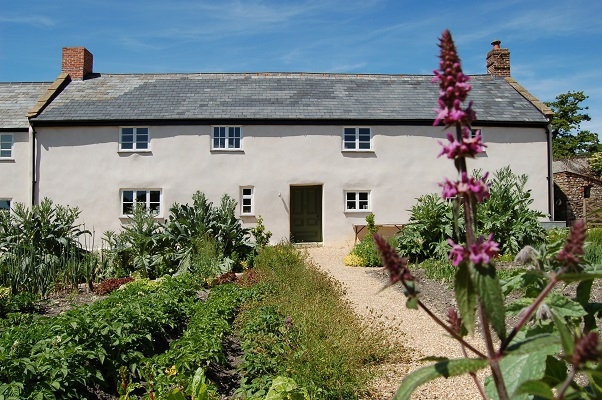 An abundance of recipes to learn at River Cottage cookery school

My one-day cookery course at the River Cottage was full of revelations. I like cooking, but I’m not a fan of lengthy, complicated recipes: more than five ingredients makes me think it’s not worth the hassle. However the dishes we made at the River Cottage were straightforward and easy to remember; as well as the bread we made Chinese fish parcels, faggots with onion gravy and fruit galettes, while feasting on extra nibbles such as beetroot and walnut hummus and crunchy salted caramel chunks. 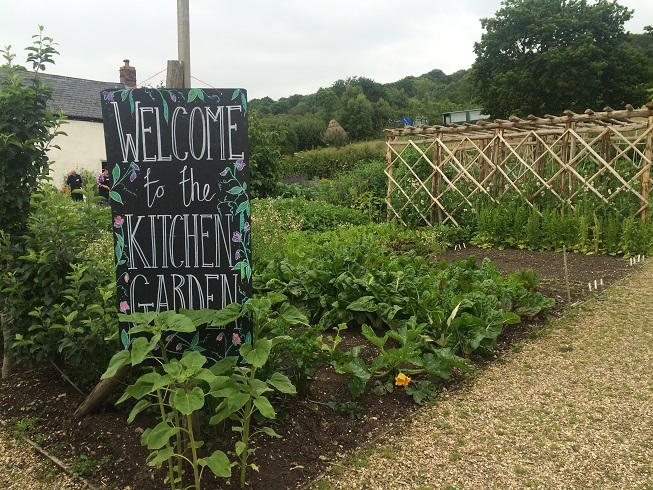 However this wasn’t just a cooking-by-numbers exercise but cooking completely from scratch, so we learned how to descale and fillet freshly-caught pollock, we lovingly stirred and kneaded and rolled our bread while being taught all about yeast and sourdough,  and we even formed an orderly queue to mince our plates of pig’s heart, liver and lungs to shape into the perfect faggots. All the time our good-natured chef Andy was fielding questions from our class of 20, some of whom were passionate foodies, others who were first-time chefs or, like me, keen to branch away from the same old recipes. 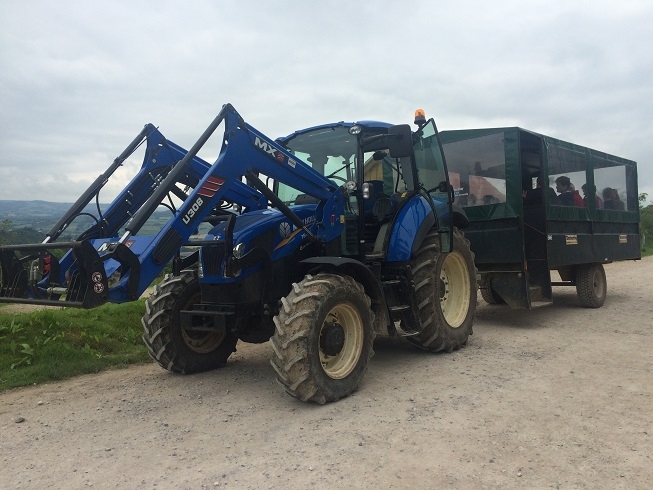 The day began with a tractor ride down the steep hill to the famous River Cottage HQ deep in the Devon countryside.  As well as the large, well-stocked kitchen, there was a glass-fronted dining room which was hosting a large Sunday lunch, the cottage itself and the kitchen garden at the back where everyone made for during the lunch break. The view from the kitchen itself was stunning – rolling hills, sheep playing happily just a few feet away – and we were supplied with coffee and juice before donning our aprons and finding a work station. 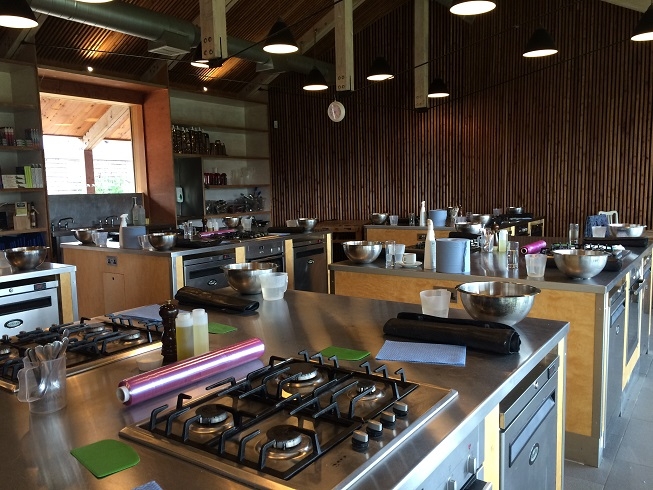 The kitchen was very smart and gleaming

Making our own bread

Chef Andy, who reminded me of a less manic Lee Evans, was clearly as passionate about where food comes from as well as what do you do with it, and a constant theme was being aware of what you eat. Supermarket bread, he explained, while showing us how to made and knead our dough, is mass-produced at great speed and contains all sorts of additives, whereas our bread is far more traditional: just flour, yeast, salt and water. 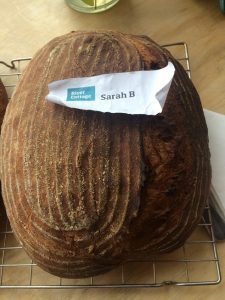 Taking time over your bread really pays off too: after 15 minutes of kneading we let it rise for an hour or so, then some gentle folding and then more rest, then we moved our dough to rest in specially-shaped proving bowls, and only later did we place it lovingly in the ovens.

It was hard not to feel very close to your dough after all this loving care and attention – some people gave theirs names, I couldn’t resist patting mine occasionally like a pet. The final result looked great – and tasted even better.

Filleting a whole fish was a new experience and another lesson I’ll take away with me: no more buying cellophane-wrapped packages in my local supermarket. We were taught how to spot if a fish is fresh (clear eyes, shiny body and a fresh smell) and we then grabbed a fish each before taking it outside to descale in the garden outside. The cottage cat paid no attention as we trooped out and back it with our fish – ‘he’s old and used to this’ explained one of the staff’ – and then it was time to set about filleting, an experience I found fascinating and which I’ll definitely be doing at home. 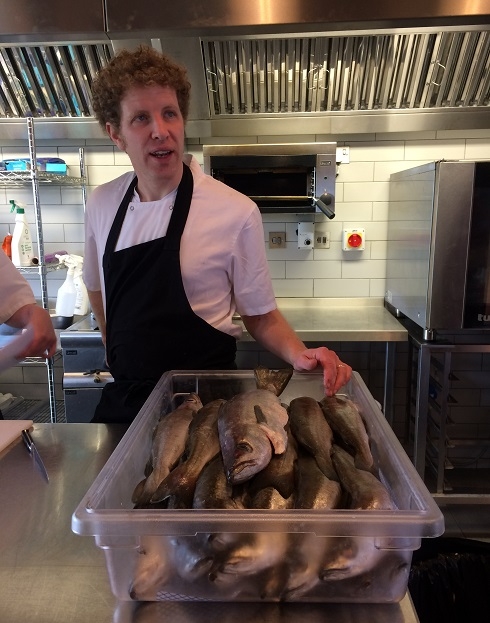 Chef Andy and a load of freshly-caught pollock. We would have one each and learn to clean, fillet and cook it

After extracting two massive fillets from my fish (and putting the head and bones in a pan for fish stock) I put an assortment of finely-cut fresh vegetables from the garden in paper bags and popped the fish in on top with some soy sauce and sesame oil for about 15 minutes – it was so simple and tasted delicious for lunch.

Making faggots was a new experience and I felt my grandfather, a butcher, would have approved. Shockingly much offal is just discarded by abattoirs as there’s no market for it, but there’s a lot of goodness in pig’s hearts, lungs and liver (and it certainly made for some interesting pictures.) I was too full to eat all of mine so I parcelled it up to save for later – the first time I’ve turned up to a posh hotel with some freshly-cooked faggots in my handbag. 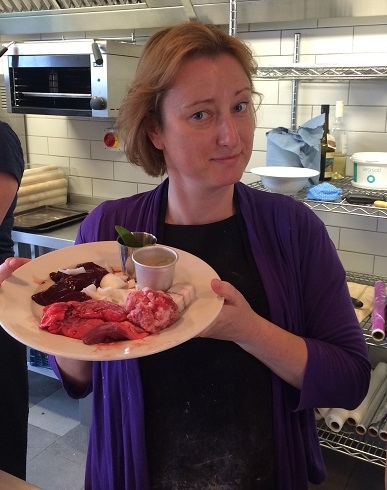 I’m not looking entirely sure about my plate of offal…

Finally it was time for dessert and we set to work making galettes, first making the pastry with an eye-watering amount of butter, and then adding the pre-prepared fruit (thanks, kitchen helpers!) to the cut-out pastry shapes. We were moving at a fair pace by now as it was nearing home time, but Andy was very skilled at upping the tempo while not making us feel rushed, but still imparting a lot of useful information. 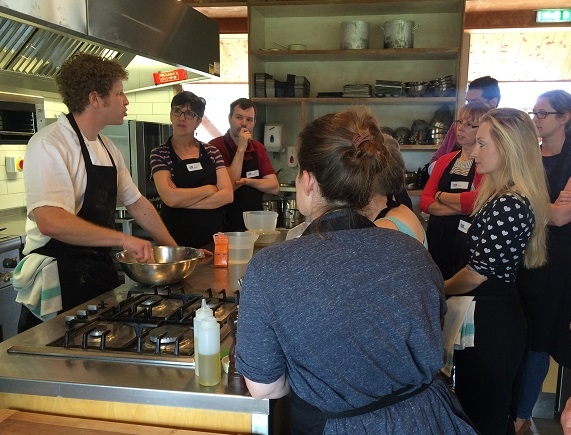 Thankfully he’d told us at the beginning that all the recipes were going to be emailed to us so we weren’t frantically taking notes, and the benefit of watching Andy first and then going back to our places to try and do something similar was that we really had to think about what we were doing, rather than just reading off an instruction sheet. 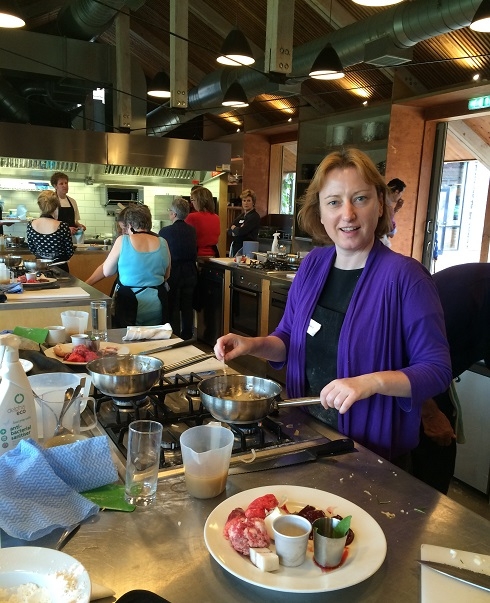 We finished by eating out meal of faggots, gravy and mash followed by the galettes and then there was just enough time to visit the shop (I bought a £3 dough scraper which had been very useful during the bread-making) before catching the tractor back up the hill. Some of us weren’t quick enough so we strolled up instead – after all the food I’d just eaten I was probably in need of a walk.

Just a few days later and a very comprehensive email arrived with recipes for everything we’d made that day, written in clear English so even I can follow it. Now where did I put that dough scraper?

Information about River Cottage cookery school and how to book

If you like reading about great food experiences then check these out other great reviews: 14 wines at dinner and a spa break: a memorable stay at The Vineyard, Newbury; Curry, bagels, fish and chips and bacon butties on a food tour of London’s East End; Noble Rot on Lamb’s Conduit Street, a welcome addition to memory lane;