I often wonder if the little unique touches offered by some hotels – a particular theme, a movie quiz hidden in wallpaper, a secret garden or two – are ever really appreciated by guests who are just passing through, but I certainly made the most out of the extra treats at Holmes Hotel London in Marylebone near Baker Street.

In a nod to the area’s most famous (fictional) resident, Sherlock Holmes, each floor of this five-storey hotel had a framed riddle with enticing names such as ‘The Library of the Poisoned Drink Mystery’, with the surrounding artwork giving both clues and red herrings to help or hinder you as you tried to solve it. I imagine most guests would breeze past on the way to the lifts but I took a particular delight in tracking down and attempting all the riddles, and even got the efficient and friendly house manager, Bogdan, to send me the answers at the end of my stay. As a way of standing out in a crowded market of luxury London hotels and to pay homage to the hotel’s namesake, it was an inspired and fun idea and made a pleasant hotel stay even more memorable. 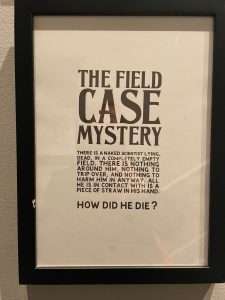 In a nod to Baker Street’s famous detective, there was a riddle on every floor at the Holmes hotel London

While not being the most stand-out of London hotels from the outside, Holmes Hotel is an imposing building, made up of four townhouses knocked together, with entrances on both Chiltern Street and Baker Street. The decor was ’boutique hotel meets business hotel’, with smart furnishings but some fun touches such as a welcoming bulldog statue (the hotel is dog-friendly) and typewriters with messages such as ‘Let’s be adventurers’. The large downstairs lounge, bar and restaurant areas were popular with people meeting for coffee or working away at their laptops, and there was a busy vibe to the hotel which made it feel lively without being hectic.

There are 118 bedrooms in total including suites, deluxe, superior and cosy rooms. We were lucky to be staying in one of the hotel’s top rooms, The Loft, aka room 102, which was double height with a mezzanine floor and a vast window. Downstairs was a sofa, a dining table, a WC, minibar fridge and best of all, a record player with a selection of classic LPs from The Rolling Stones and David Bowie to Pink Floyd and Amy Winehouse. 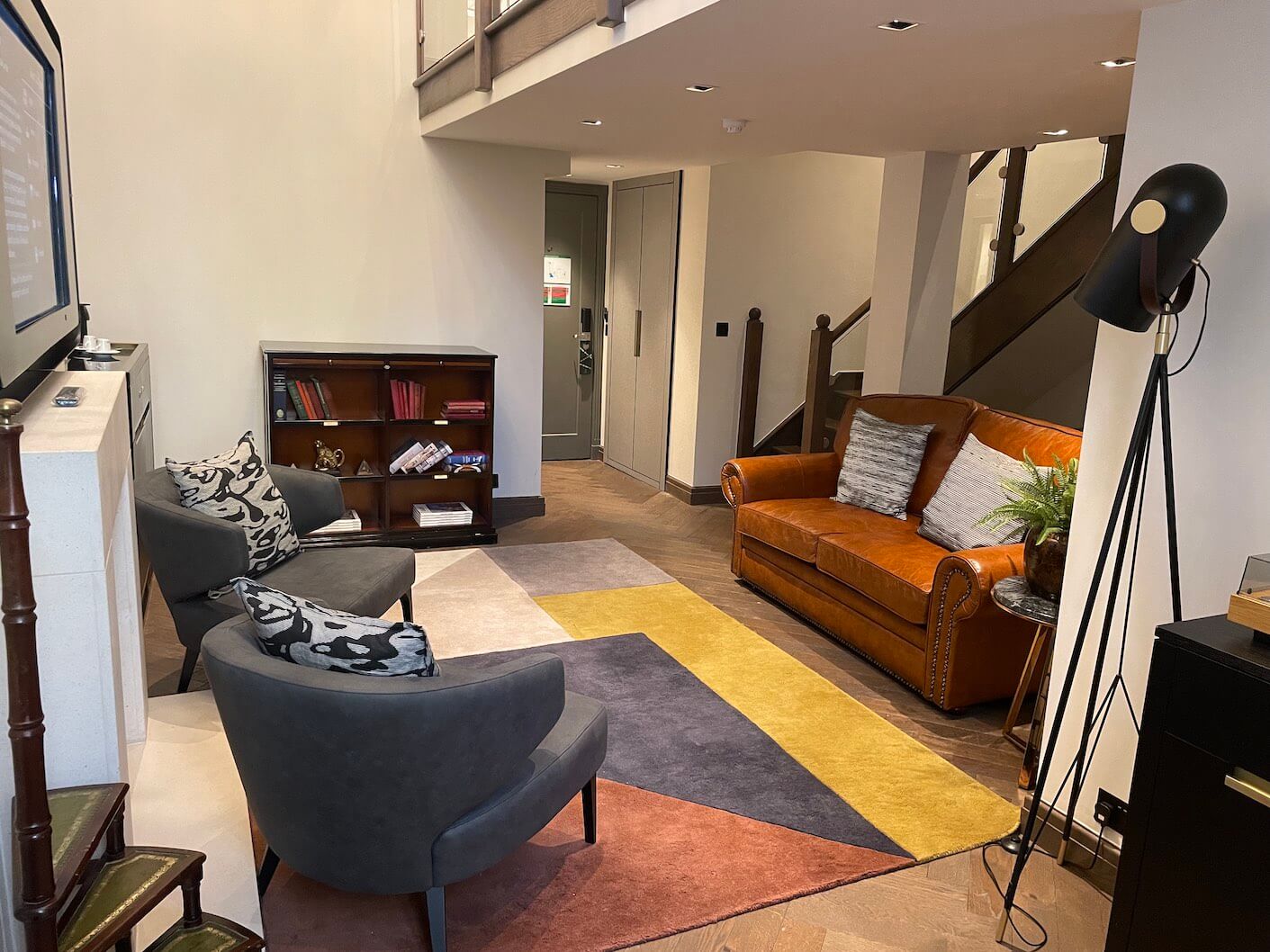 Our room was one of two Loft rooms, the largest in Holmes hotel. It was on two floors, with a large double bed on the mezzanine floor, a record player, sofa, dining table and two bathrooms 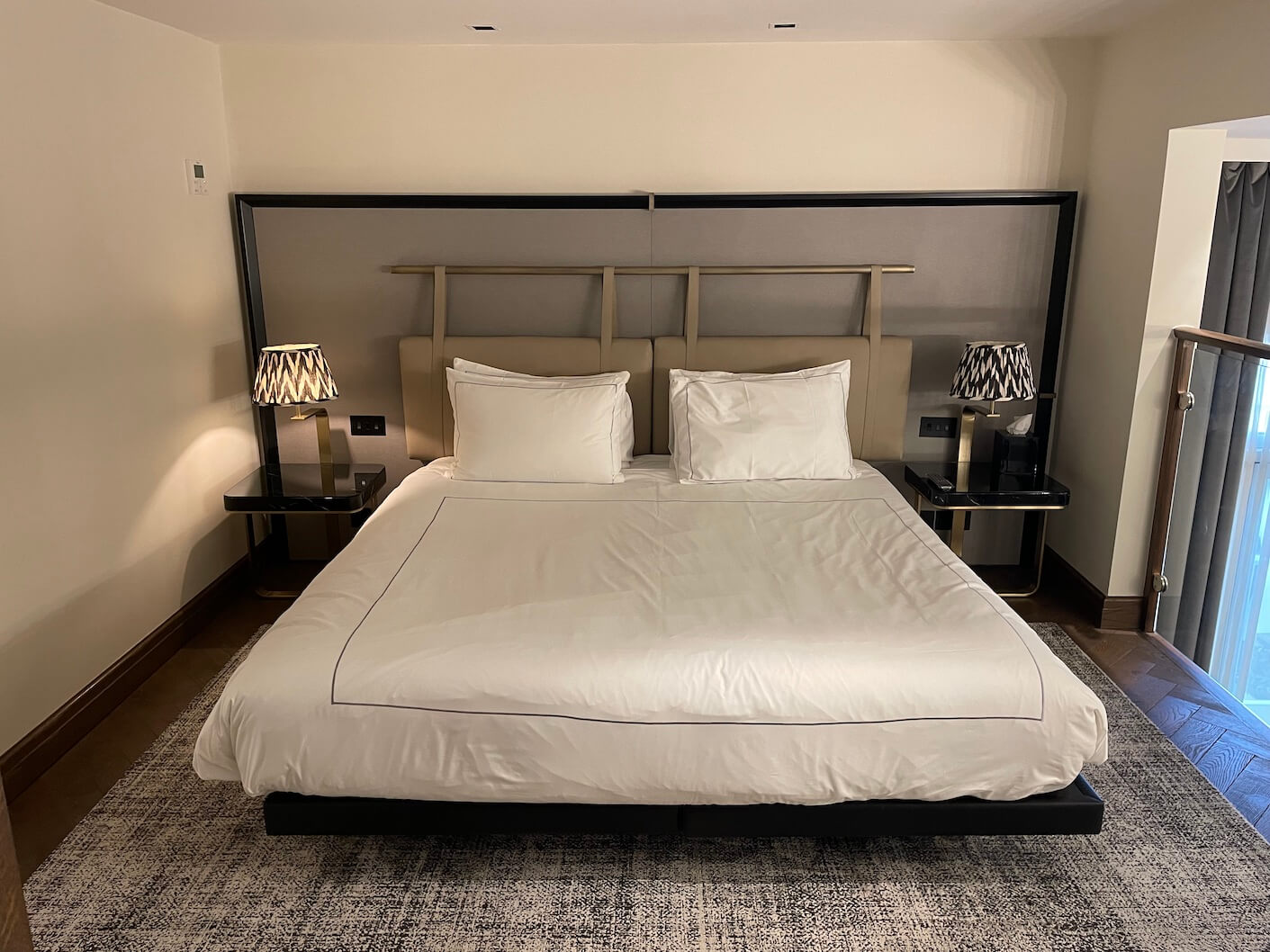 Upstair in the Loft bedroom was a King-sized bed, Smart TV, wardrobe and large bathroom with stand-alone bath and separate shower

Upstairs overlooking the main room was a King-sized bed and the bathroom with a large bath, stand-alone shower, loo and bidet. It was all very spacious and opulent while being slightly quirky – there was a TV in the bathroom, and a non-steam mirror with the message ‘I see you crystal clear’ and was a good start to our stay. 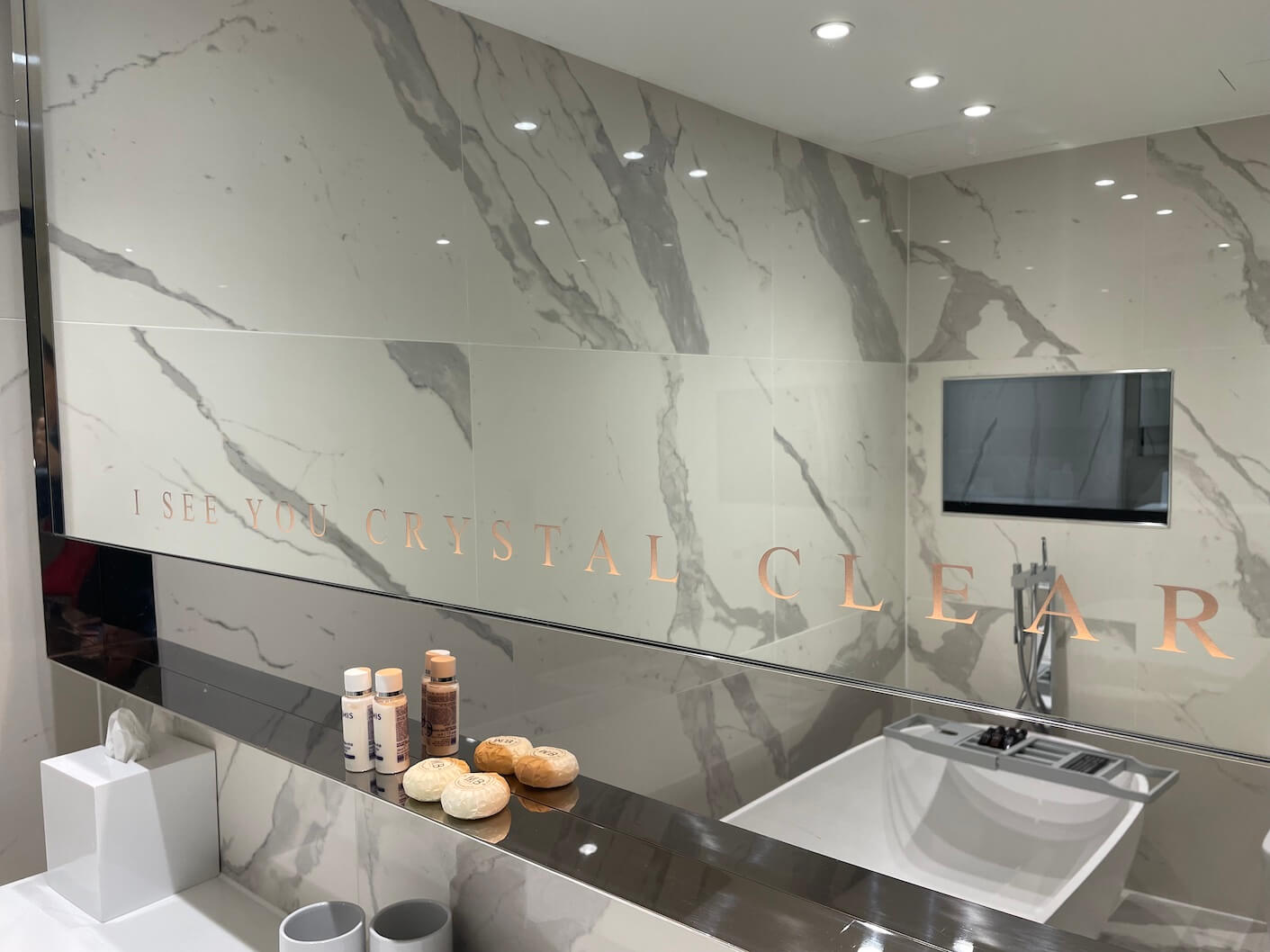 I had a tour around the rest of the hotel with Bodgan who showed me the various other bedroom options including the Chiltern Townhouse Suite and Studio Suite, many of which had artwork over the bed with a Sherlock or Edwardian theme, such as a pair of crossed pipes, pocket watches or a bowler hat. 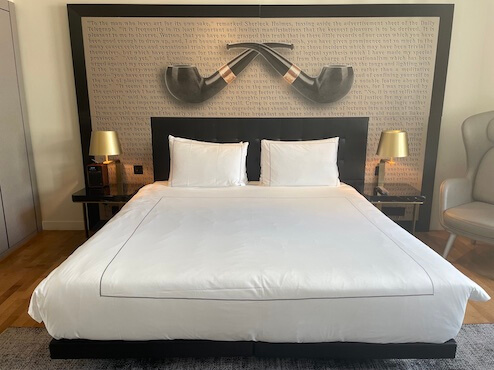 Some of the bedrooms had fun Sherlock-themed designs 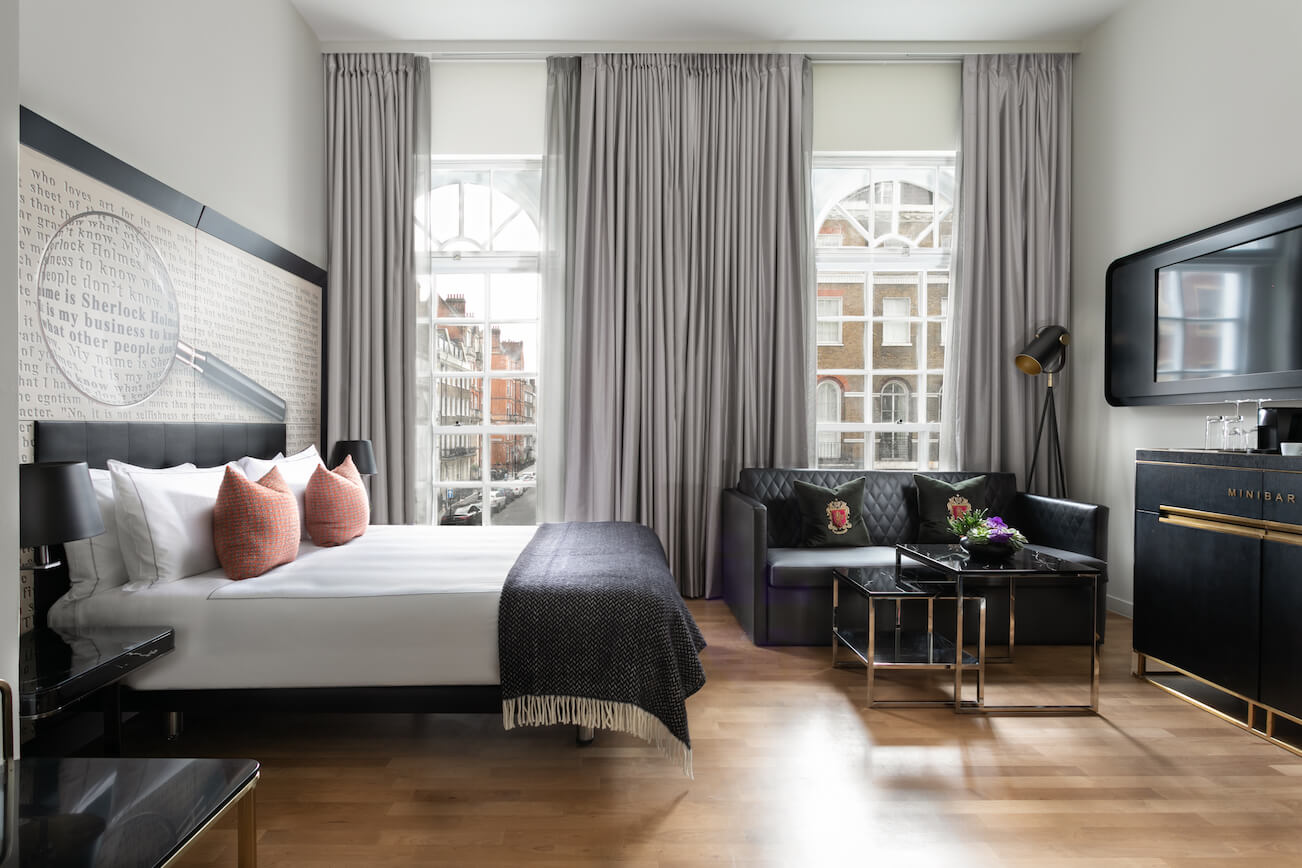 There’s a small-ish outdoor terrace overlooking a mews street where they held al fresco film showings during lockdown, and what looks like an old-school gym in the basement with some very modern but retro-looking equipment. 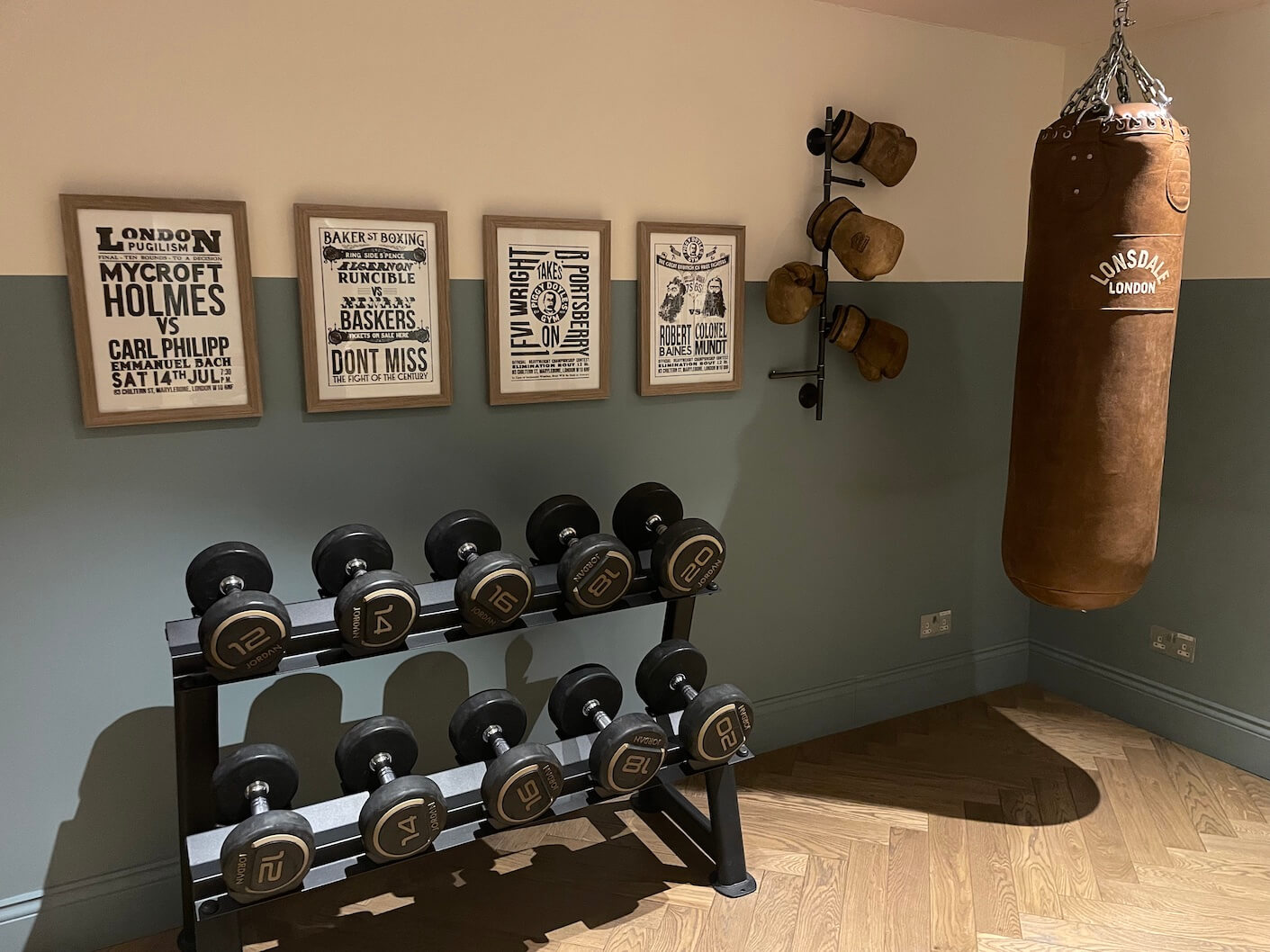 The gym at Holmes hotel, London, was kitted out with modern equipment such as rowing machines and exercise bikes, but had a lovely retro theme continuing the Sherlock Holmes theme of the hotel

Behind door 221B – another nod to Sherlock fans – there’s an event space including a pool table, tasting-room and private dining space, and on the Baker Street side of the hotel is the restaurant and bar with a lovely outdoor terrace on the pavement which captures the afternoon sunshine. 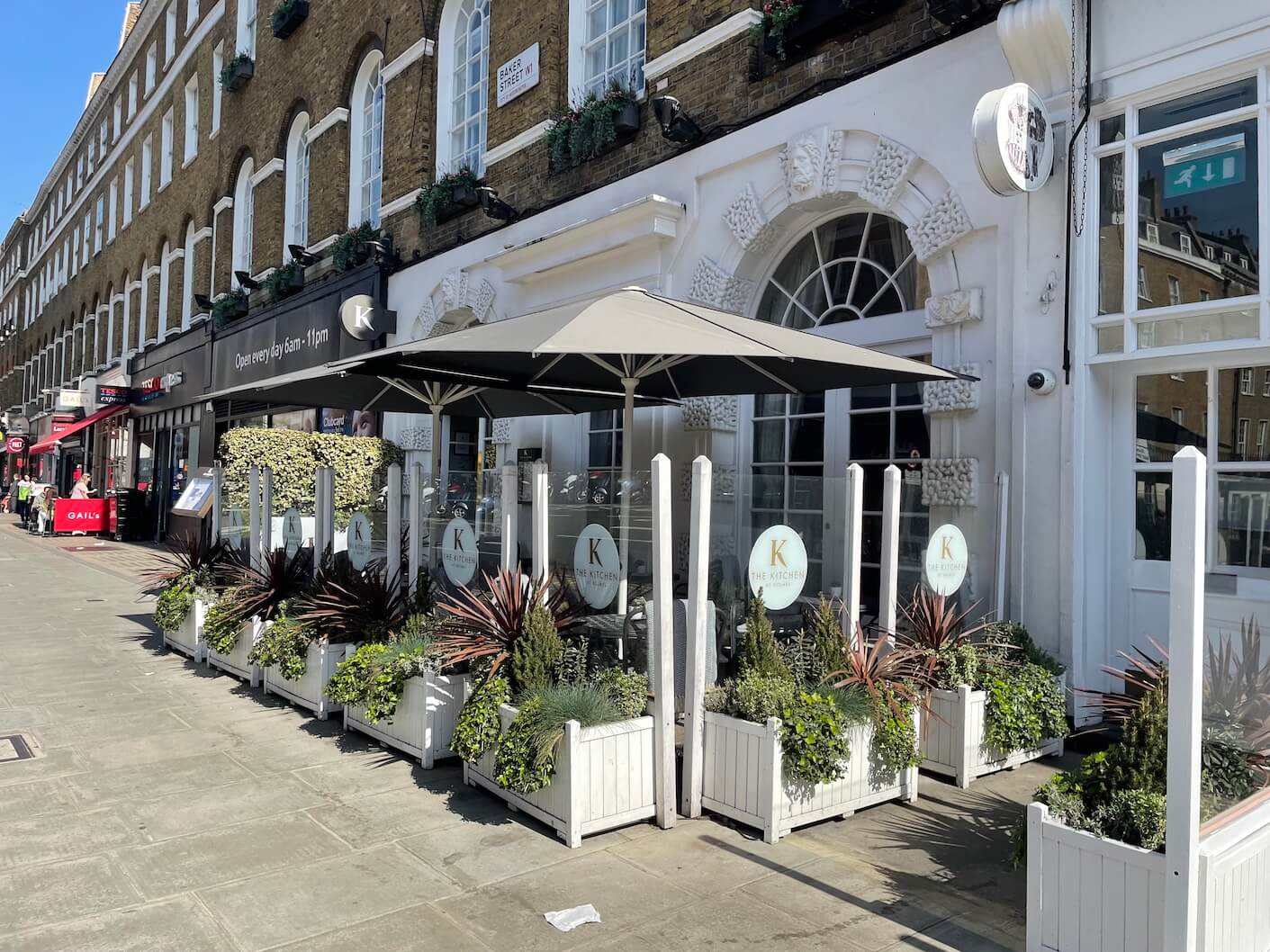 The hotel is handily located just a few minutes’ walk from Baker Street tube and opens onto Baker Street itself which is a vibrant, bustling street. Just across the road from the hotel is a handy Franco Manca pizza restaurant if you’re not dining at the hotel itself, and there is a wide selection of shops both on Baker Street, nearby Kendrick Place and Marylebone High Street which is just a few minutes’ walk away. You can buy everything from saxophones and handmade shoes to bespoke shirts, perfume and real estate, which makes this neighbourhood one of the most interesting and diverse in London for shops and cafes. I sat outside a cafe/cocktail bar called 31 Below and had a lovely Caesar salad in the sunshine before heading back to the hotel and opening the complimentary bottle of Prosecco which the hotel had kindly provided, while listening to David Bowie and Rolling Stones records on my personal record player. 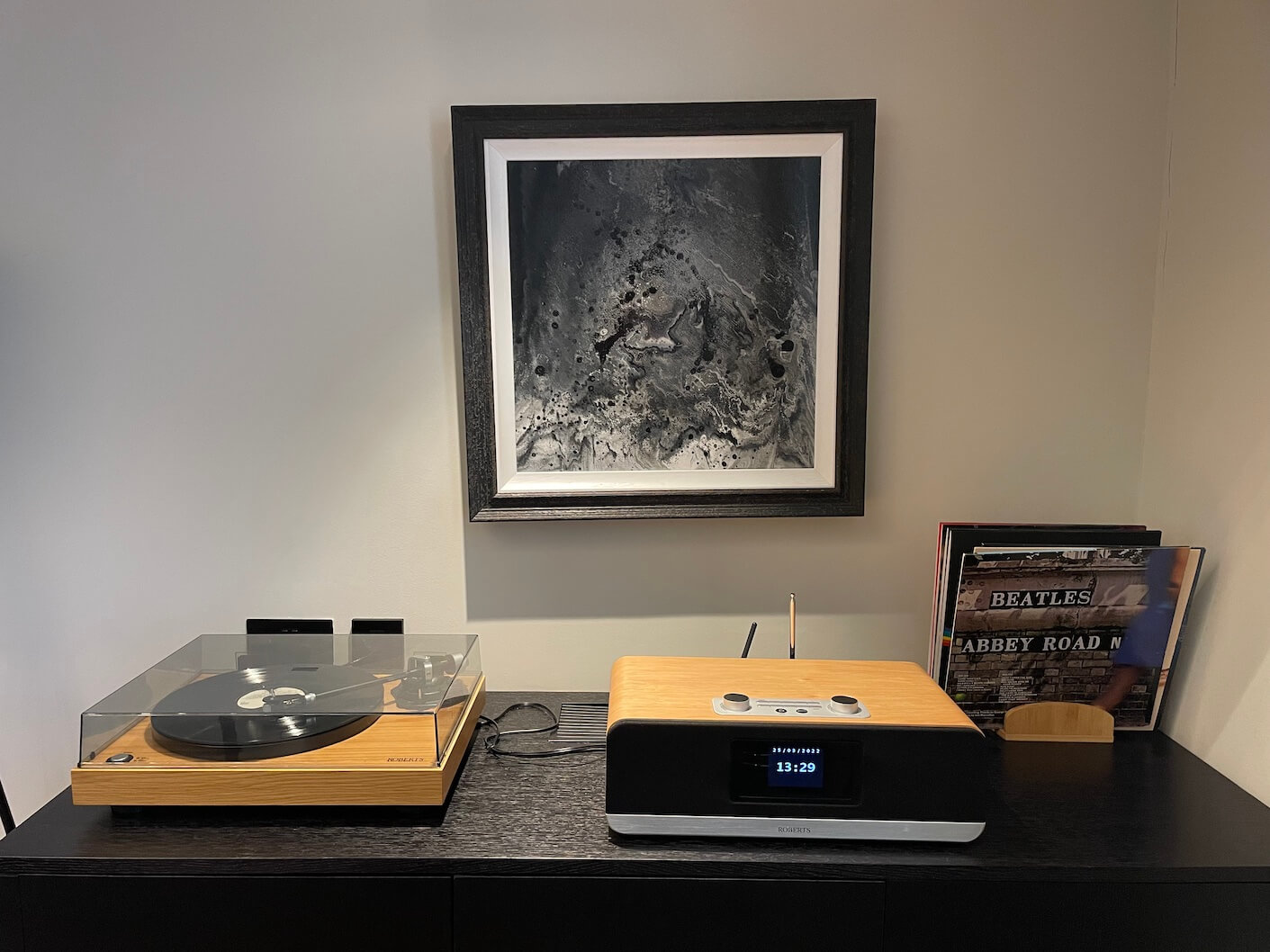 The record player and vinyl at Holmes hotel London

We weren’t booked in for dinner at the Holmes hotel’s own restaurant, Kitchen at Holmes, which promises seasonal produce with  Mediterranean influences, so instead had a lovely meal at the aforementioned Franco Manca which I can highly recommend if you haven’t already discovered it for yourself. With excellent pizzas, hearty red wine and friendly, prompt service, it’s a chain which has expanded rapidly over recent years but hasn’t lost its down-to-earth charm. We then walked round the corner to Purl, a promising-looking cocktail bar on the corner which promises amazing cocktails and an atmosphere which ‘will transport you to another place or time.’ I can only wish it had done as the place was woefully understaffed and totally lacking in atmosphere and we were delighted to escape after just one drink back to our Loft apartment.

Breakfast was in the bright and lively Kitchen at Holmes restaurant and there was a great choice available, including cakes, croissants, Full English, eggs done any way you could think of and ‘Pots and Sweets’ which included pancakes, porridge, cereal and fruit salad. I started off with a totally delicious Holmes granola with natural yoghurt and blueberry compote, and then had the Eggs Florentine while my partner had smoked salmon and scrambled eggs, all excellent.

Eggs Benedict at the Kitchen at Holmes restaurant 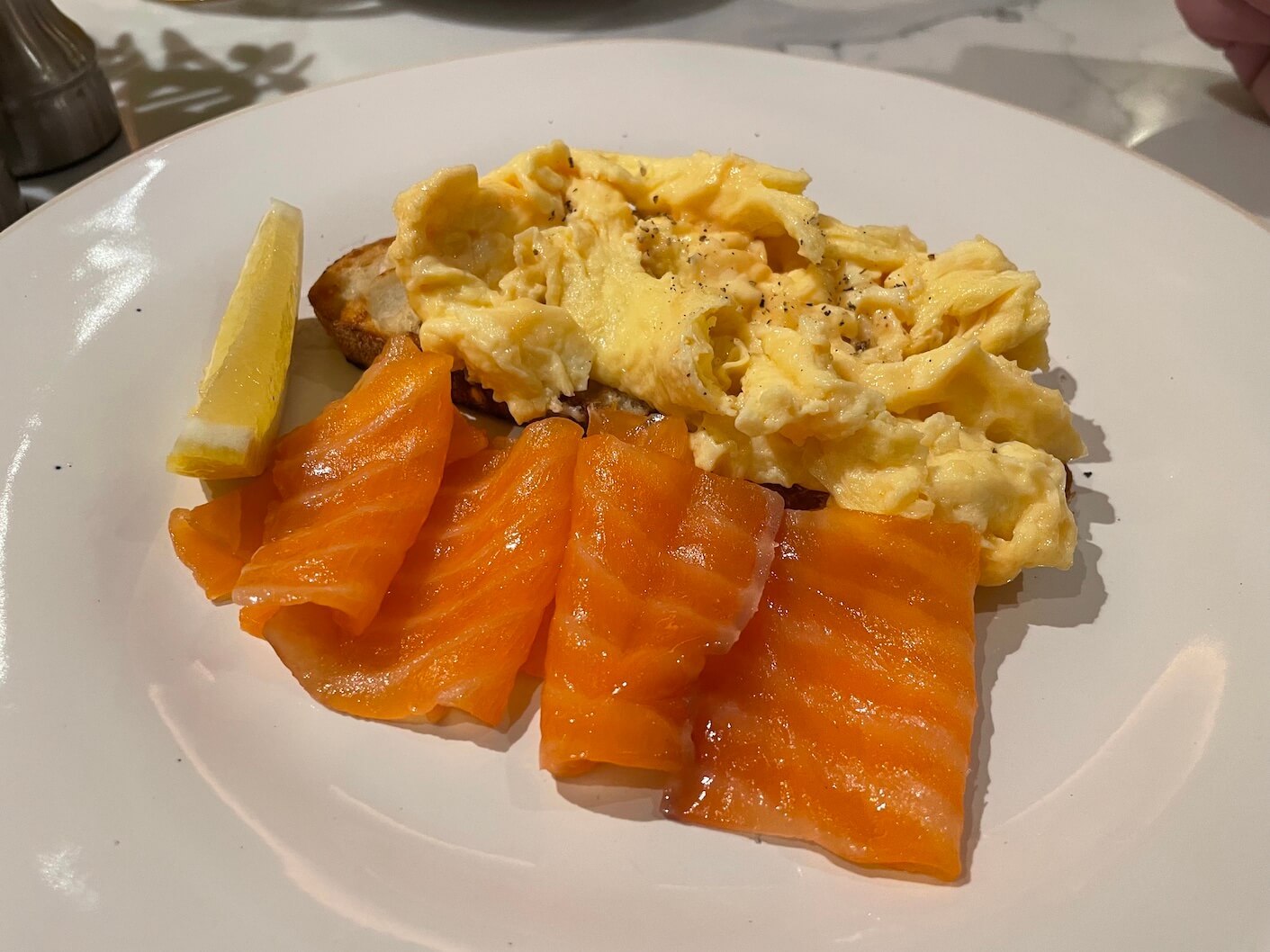 A hearty dish of scrambled eggs and smoked salmon

The service was prompt and the food, together with great coffee and freshly-squeezed orange juice, was an excellent start to the day. The only thing that was left to do was complete all the remaining riddles. Now what was the answer to the Barber Shop Mystery? 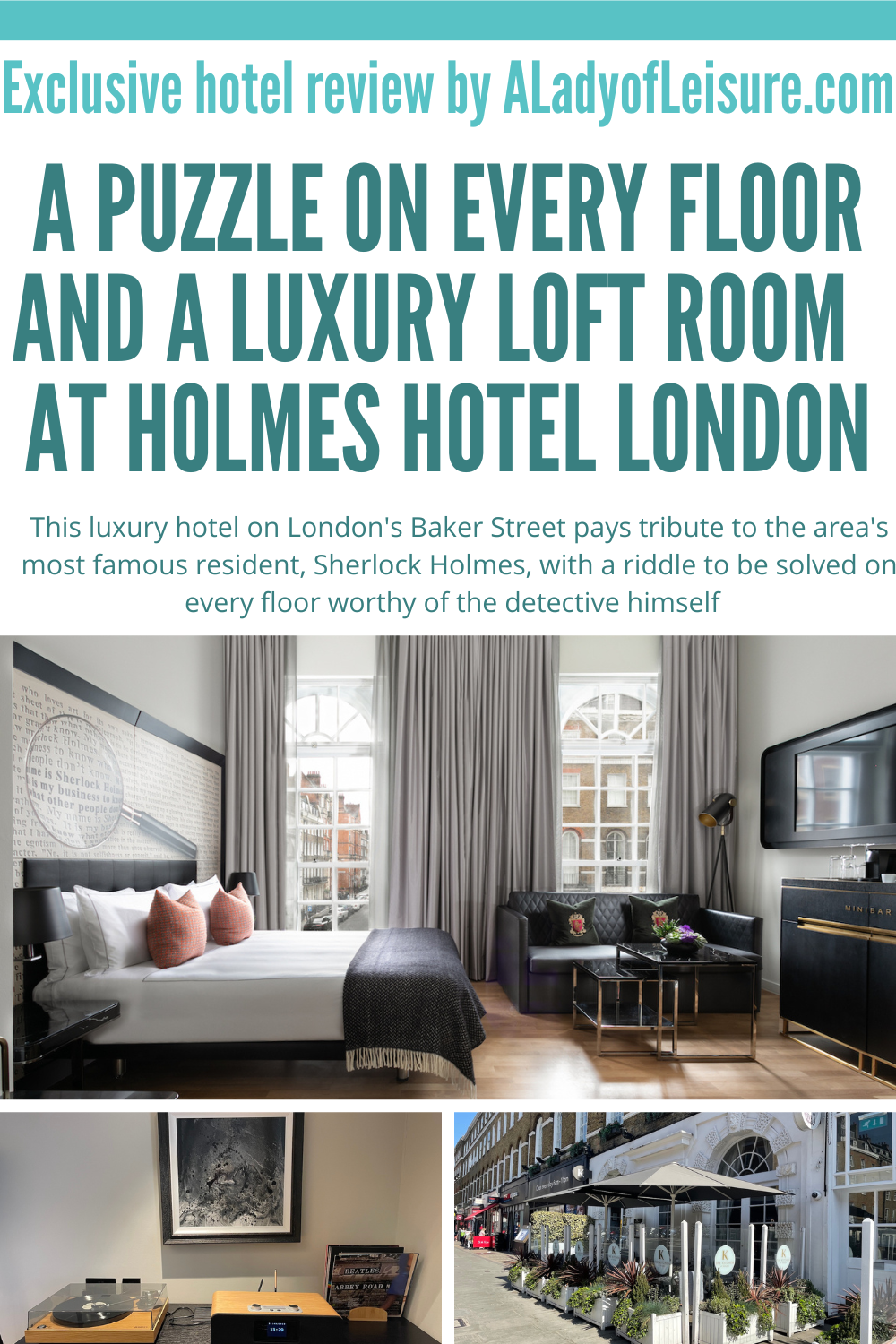