There’s a lot to pack in during a stay at luxury hotel Sopwell House, St Albans in Buckinghamshire. There’s the popular afternoon tea in the lounge at this four-star Georgian country house hotel; there’s a variety of food and drink options, from the formal two AA rosette restaurant to the more relaxed Brasserie, the Conservatory Bar and the cocktail lounge; there’s 12 acres of grounds to explore and there’s 128 bedrooms to choose from, including 16 Mews Suites in a separate gated courtyard (complete with outdoor artwork and a hot tub).

But anyone looking for instant, relaxing luxury should head straight to the spa and in particular, the Club at Cottonmill, a VIP section of the hotel’s Cottonmill spa which is either included in your stay or can be added at extra cost. Judging by my recent stay at Sopwell House, part of the excellent Pride of Britain Hotels collection of luxury hotels, it’s well worth it.

The spa at Sopwell House

The original spa – now just called Cottonmill – is perfectly lovely, with a proper-sized swimming pool, hot tub and loungers, but being able to use your exclusive wristband to tap into the ‘VIP’ section is to enter a whole new world of spa luxury. 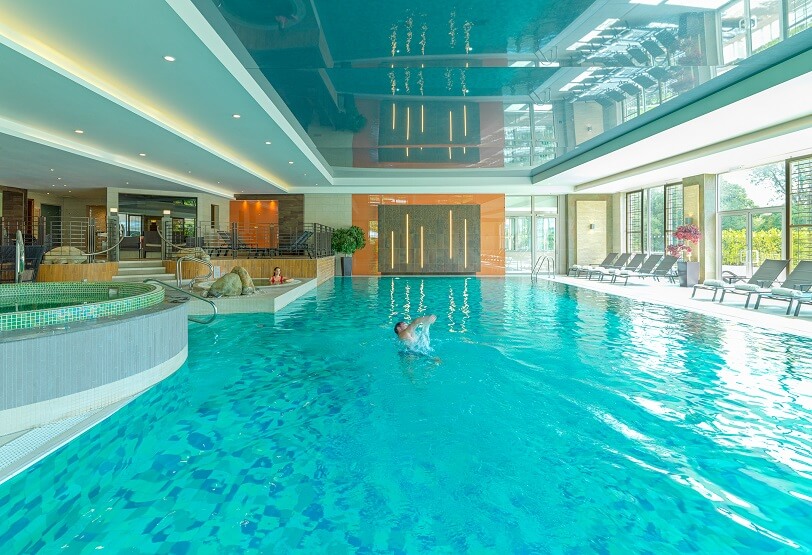 Rather than loungers lined up in one huge block along the poolside, there are pairs of softer mattress-topped loungers dotted all around, giving an air of privacy and luxury, and there’s an abundance of soft, fluffy white towels. 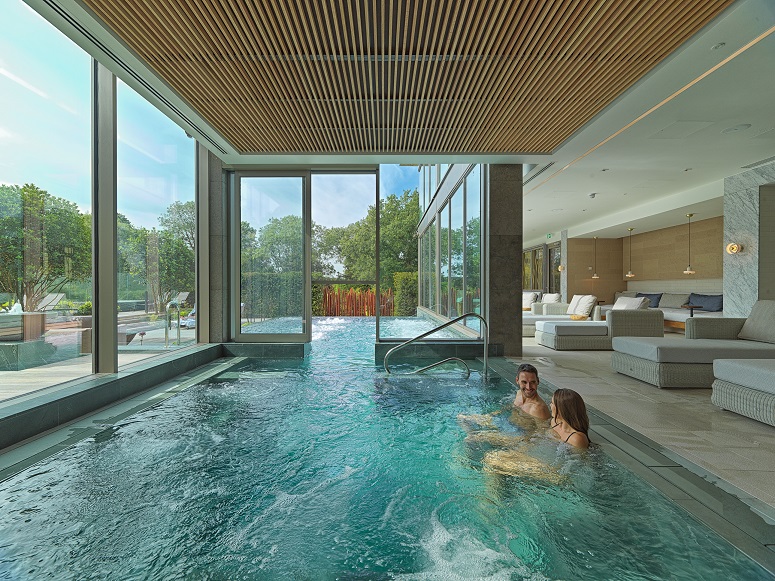 The Club at Cottonmill Spa at Sopwell House is a VIP-style club next to the swimming pool area, with its own indoor/outdoor hydrotherapy pools and lots of luxury loungers

There’s a sauna, a salt steam room, lots of showers and there’s an indoor/outdoor hydro pool with jets and bubbles. Best of all, there’s the spa garden with three private hot tubs surrounded with greenery and with lighting which makes them very romantic in the evenings, plus cabanas and a fire pit to make it feel somewhere very special indeed. 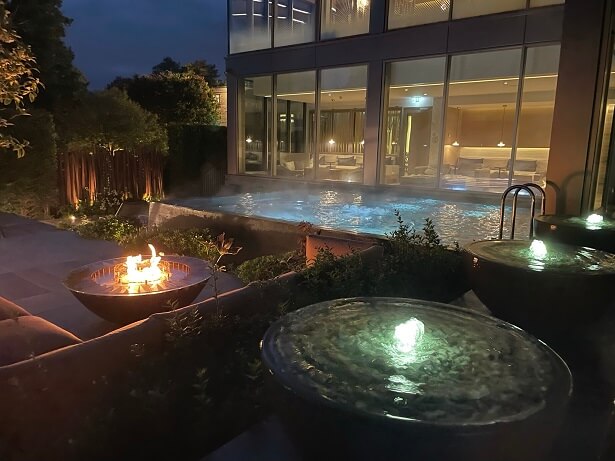 The outdoor hydrotherapy pool at The Club at Cottonmill spa at Sopwell House, plus fire pits 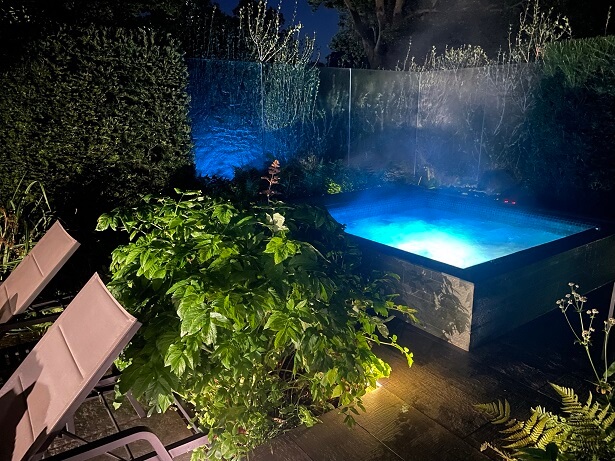 One of several private hot tubs in the Club at Cottonmill spa garden, which are very romantic

My partner and I arrived one Friday afternoon and within about two seconds of donning the white towelling robes (which you can wear from your room) felt incredibly relaxed. We tried everything from the sauna to the steam room, the hydro pool and the hot tubs before heading upstairs for our treatments. 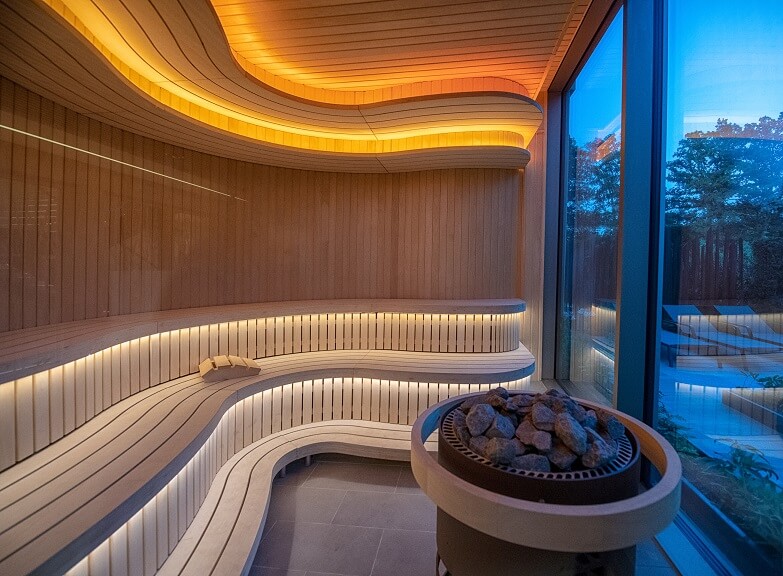 The sauna at The Club at Cottonmill spa at Sopwell House

We had decided to go ‘full couple’ with a couple’s massage which are two separate treatments in the same room – I had a Cottonmill Signature massage while Stephen had an Aromatherapy Associates intensive muscle release massage – and once we’d stopped laughing at the extremely skimpy disposable underwear on offer, we were treated to two thoroughly relaxing and soothing massages by Sopwell House’s friendly and efficient staff, and then left to chill out in the relaxation room. 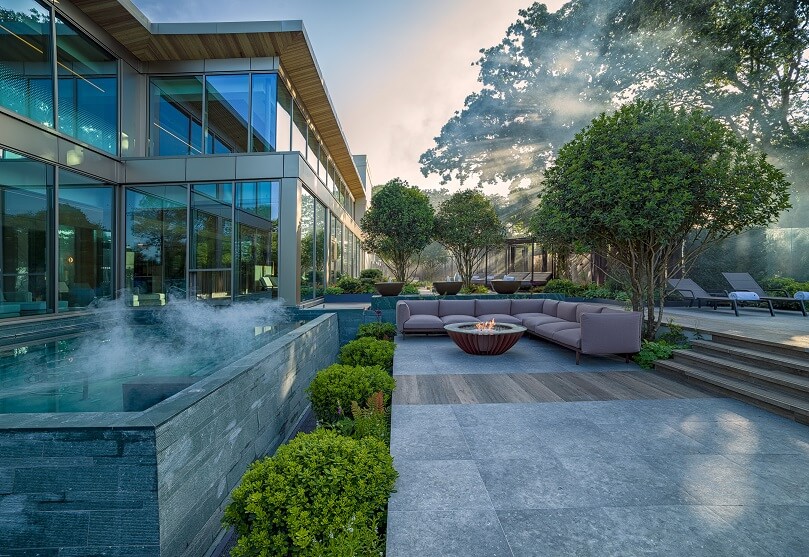 The outdoor spa garden at The Club at Cottonmill

We then returned to ‘our’ VIP section and spent another hour or so in our private hot tub feeling incredibly fortunate to be able to do this on a Friday afternoon, before reluctantly leaving and heading back to our room to change for dinner. I say reluctantly but to be fair, we’d spent so long in hot bubbling water that we were in danger of turning into prunes, and it was no hardship to use our room keycard to open the gate into the private mews suites area.

The Mews Suites at Sopwell House

While most of the rooms at Sopwell House are in the main building, just across from the entrance is a private courtyard area containing the 16 Mews Suites.

On a previous trip I’d stayed in the larger Willow suite which has its own terrace with a hot tub, but this time we were in Ivy, which was on the first floor. 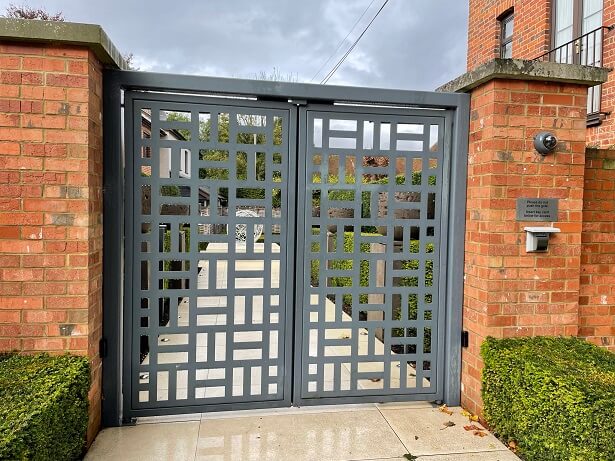 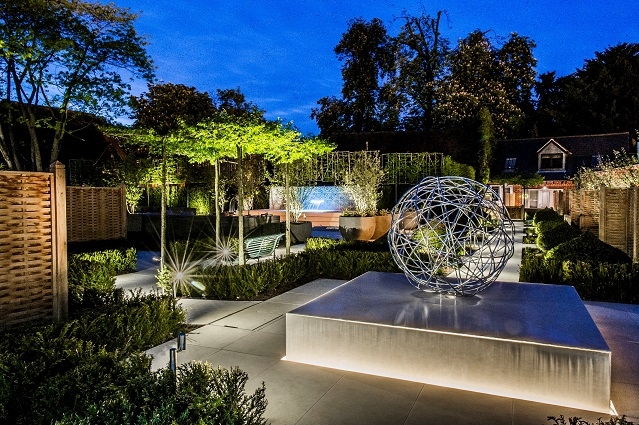 The Mews Suites courtyard looks impressive day or night, with outdoor sculptures and a hot tub for use by guests 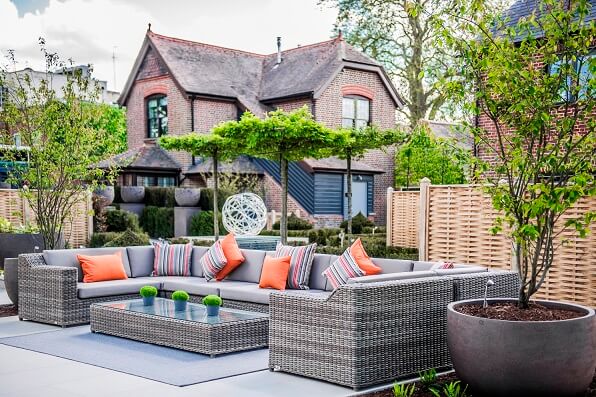 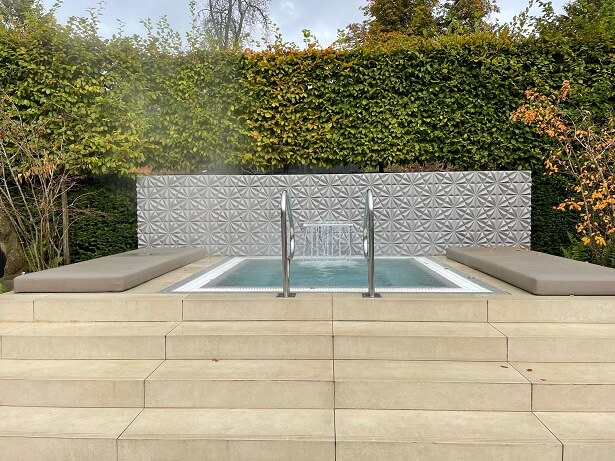 While our bedroom didn’t have its own hot tub – many of the suites don’t, but there’s an outdoor hot tub for exclusive use by Mews Suite guests – it scored highly on space and charm, nestled in the ceiling eaves but still with space for a king-sized bed, writing desk which doubled as a dressing table with a make-up mirror inside, sofas, cupboards and bathroom with a large, fast-filling bath. There was a kettle and coffee machine and lots of lights and plug points, essential in any modern hotel bedroom.

Our bedroom, Ivy, was on the first floor and was bright and colourful as well as cosy 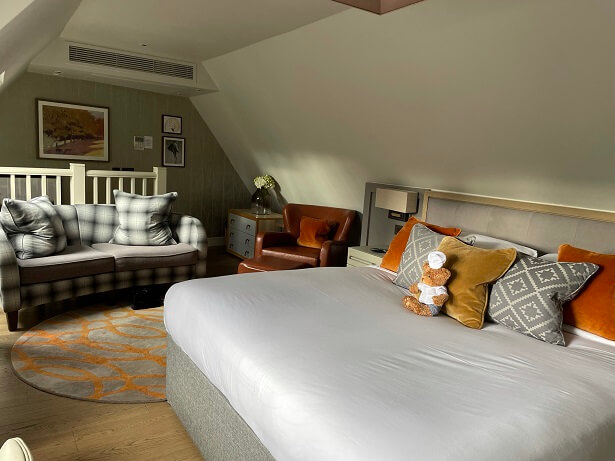 There was even a Sopwell House chef bear to great us 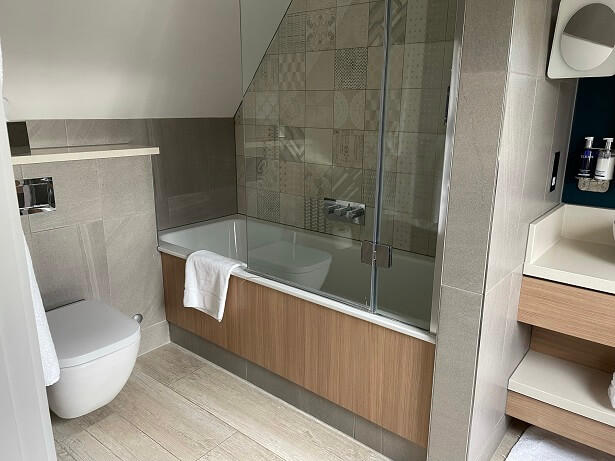 The bathroom was clean and spacious

After changing out of our towelling spa robes into something more suitable for dinner, we headed back to the main house. It was very pleasant wandering across from the Mews Suites to the main building for the evening meal as the Mews space was so artfully lit at night-time that it all felt rather special and atmospheric.

While you don’t have to be a sports fan to enjoy Sopwell House, there are added treats if you do. One corridor is entirely lined with sports memorabilia including signed photos and football shirts. Sopwell House has a long history of hosting teams from football and rugby in particular, and this ‘Hall of Fame’ lists just some of those who have stayed here, including an impressive array of international sides (England, Brazil and Germany to name just a few) as well as Arsenal, Manchester United and Barcelona – the Restaurant at Sopwell House was even opened by Arsene Wenger. 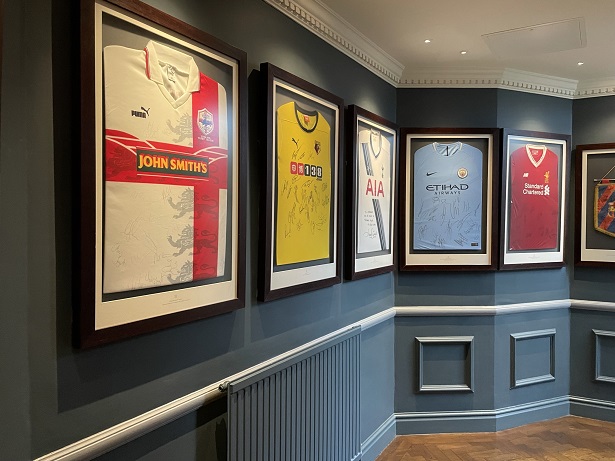 Our visit to the Restaurant didn’t get off to a great start though, when standing at the entrance for a lengthy amount of time without being acknowledged, we were finally greeted with a surly, ‘Your table was booked for 8pm [it was five past eight] – I’ll see if it’s still available’ which wasn’t quite the reception we’d been expecting. 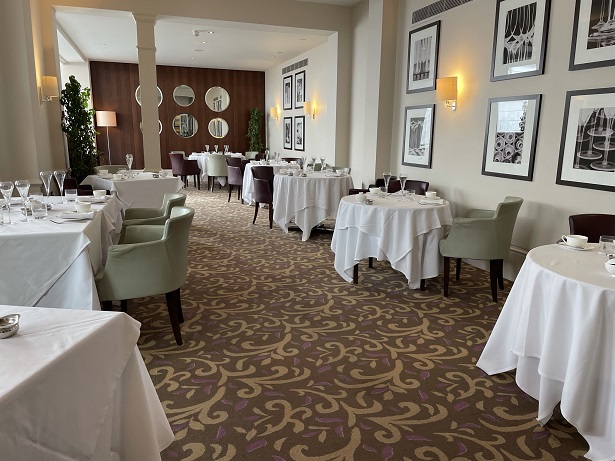 I would have been surprised if it hadn’t been given that the restaurant had plenty of free tables and we had only been a few minutes late, and indeed were duly shown to our table, while feeling rather unwelcome. After checking our reservation details, our waiter suddenly did a 180 and became super-attentive, offering all manner of cocktails and wine and drinks off-menu – nothing was too much trouble – and soon we were enjoying a whole succession of drinks,  which  were more successful than others. There was an interesting selection on offer though, including a 1603 (which Sopwell House building dates from), with rhubarb gin and prosecco, and The Cottonmill Egret, which is Chambord and vodka served over cotton candy with a Tattinger rose float. 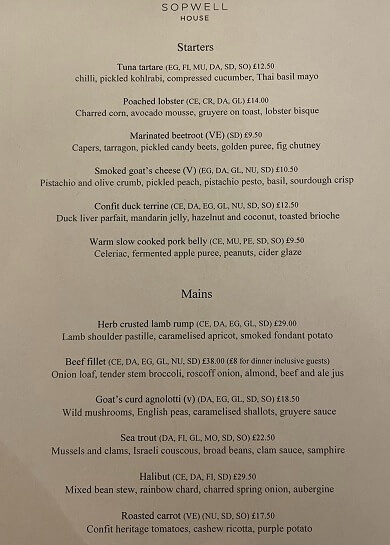 The menu at the Restaurant at Sopwell House

The food menu was classic and simple, with tuna tartare, poached lobster and marinated beetroot among the starters and beef fillet, herb-crusted lamb and halibut for mains. Before the dishes arrived we had an amuse bouche of tomato and red pepper, and paprika and sour cream, which was a nice touch. My tuna tartare was fresh and light and arranged like a work of art on the plate, while the sea trout was perfectly arranged over mussels and clams, couscous and samphire. 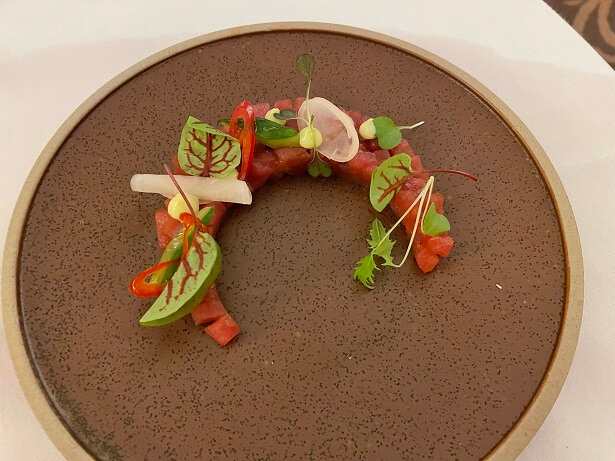 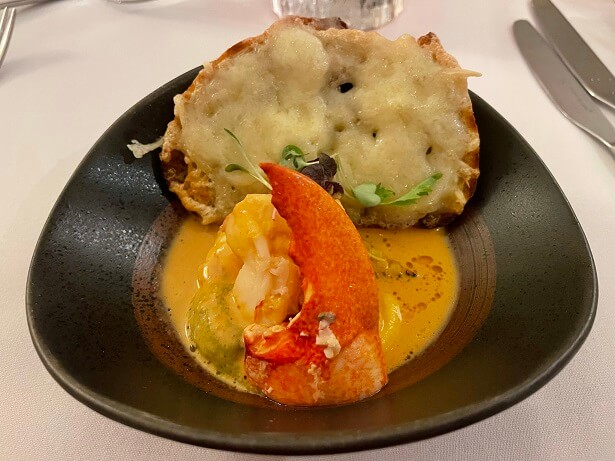 Stephen’s starter of poached lobster with gruyere on toast 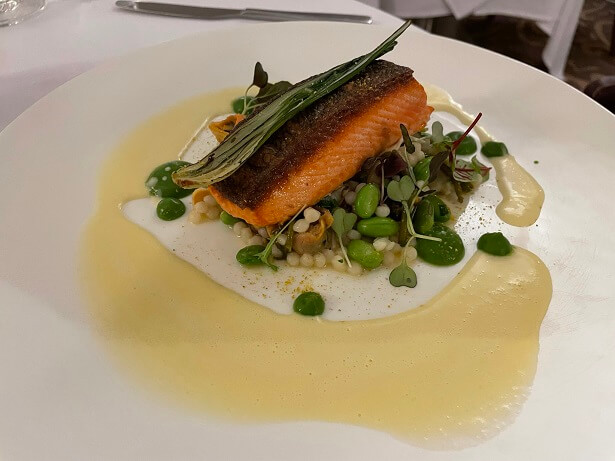 My main of sea trout with mussels and clams

Overall the food was perfectly fine if rather pricey, at £38 for beef fillet. What was slightly odd, as well as the erratic welcome, were some of the waiting staff who just carried the dishes in a slapdash manner and plonked them down on the table without style, finesse or explanation, and who mainly wore their masks around their chins or just covering their mouths. One waitress who wasn’t serving us was extremely efficient and made sure all her dishes were carried and delivered well, but the casual approach of the others was a little odd in a formal restaurant. The decor in the restaurant, mainly the old-fashioned carpet, could have done with an upgrade, and the chairs in the lounge bar, where we finished our drinks after our meal, were also in need of upholstering. After the luxury and attention to detail in the spa, it felt like the main restaurant needed to work a little harder to keep up, and maybe the less formal Brasserie restaurant would have delivered a more fun and polished service. 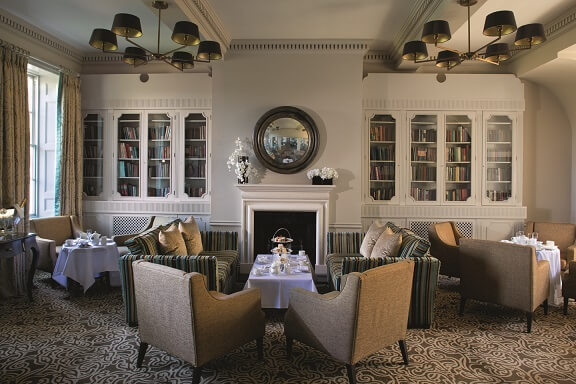 The cocktail lounge at Sopwell House 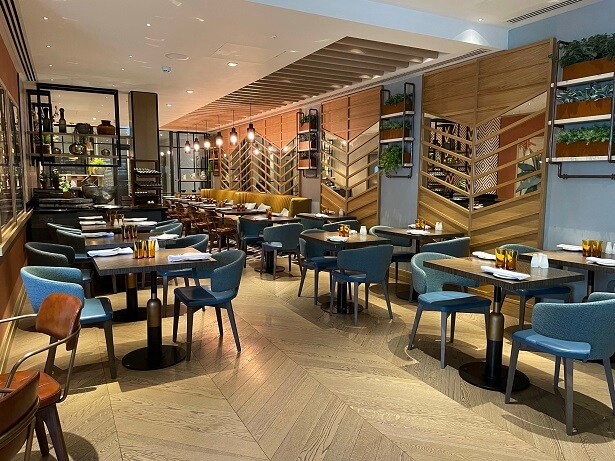 What couldn’t be faulted was breakfast in bed the following morning, which was delivered promptly, piping hot, and with everything we’d asked for. There were poached eggs and avocado on toast with smoked salmon, a full English, freshly-squeezed orange juice, coffee, hot milk and toast and with the rain lashing against the window, it was a lovely and cosy way to start the day. 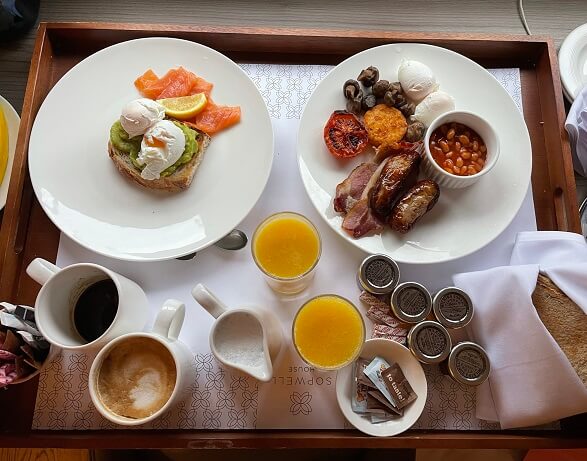 Breakfast in bed at Sopwell House was a lovely romantic treat

Later, we had the luxury of heading back to the spa for the morning for some more relaxing and pampering which made it feel as if we’d had a mini-holiday even though it was just one night away – always a good sign of a lovely hotel stay.

Hotel information and how to book Sopwell House

Sopwell House is a member of the excellent Pride of Britain Hotels group, which is made up of 50 of the best luxury hotels in the UK. I’ve reviewed many of the Pride of Britain Hotels members, including: Maison Talbooth: a lovely Essex country house hotel; Lainston House, Winchester: a delightful Autumn stay; a West Sussex spa hotel stay at South Lodge hotel; Rockliffe Hall hotel in County Durham – a relaxing spa escape