Checking into the penthouse suite at nhow London hotel reminded me of the film Pretty Woman.

‘So how come you rented the penthouse?’

(Even though billionaire Edward is scared of heights).

A stay at nhow London hotel

The penthouse at nhow London, one of London’s newest hotels and located just off City Road, between Angel, Islington and Old Street, doesn’t have a vertigo-inducing balcony like the one in the Regent Beverly Wiltshire, but what it does have is lots of space, views across north London and a vibrant green shagpile carpet. 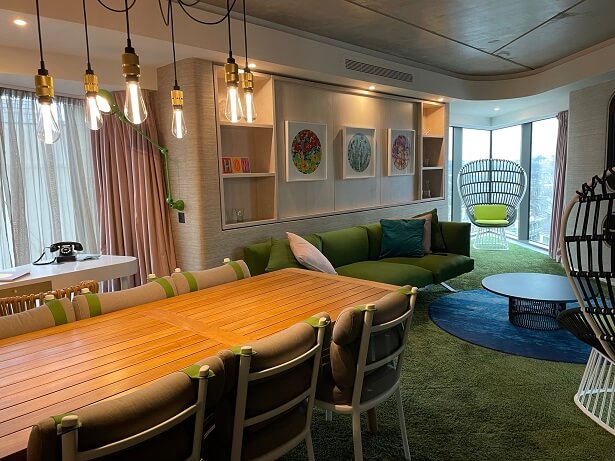 The penthouse suite at nhow London hotel – aka room 814 – is the hotel’s premier room and has a vibrant green shagpile carpet along with a sofa, large dining table, desk, mini bar and views over north London

There’s also a kettle shaped like a teapot, a portrait of the Queen with a moustache and tonnes of other fun, quirky details which are evident throughout nhow London, making it a cross between a chic boutique hotel, a millennial-friendly co-working space and a particularly trendy backpackers hangout. 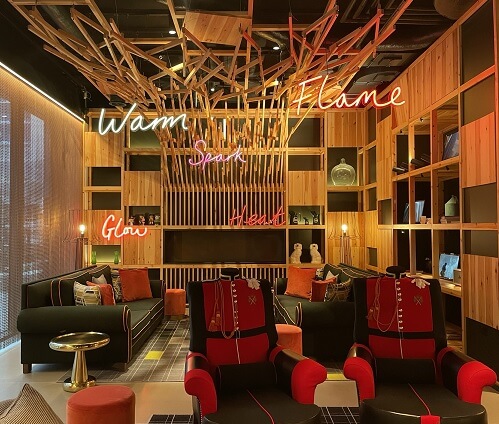 The main lobby at nhow London hotel is full of colour and fun touches such as local artwork, wacky furniture and cosy spots to hang out in

The moment you walk into the hotel’s lobby you are greeted with a riot of colour and unique features, from a rocket-shop Big Ben and free jelly bean dispensers to locally-produced artwork and an inviting central bar. There are plenty of places to find your spot, from a large co-working area with a gazillion powerpoints, to comfy sofas, a games box, a visual log fire display, bar stools and dining tables (the restaurant is currently being refurbished). 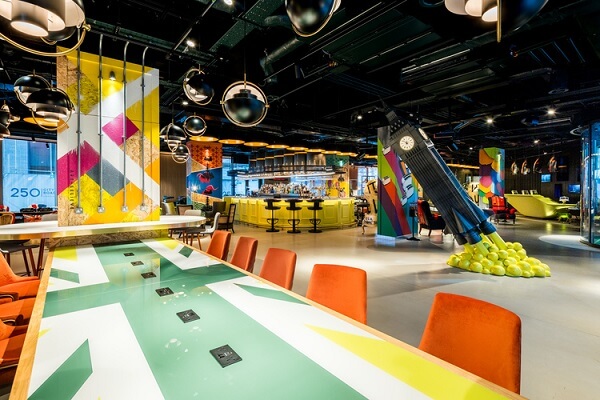 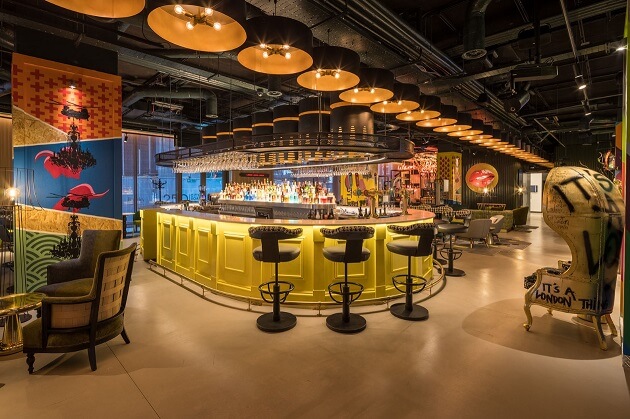 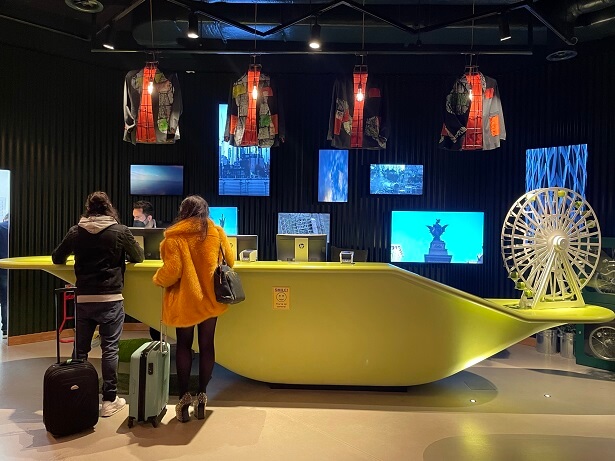 While central London is still fairly quiet, the steady stream of guests checking in and out showed that nhow had certainly found its audience, but I was checked in quickly and shown to my room by guest manager Aleks. 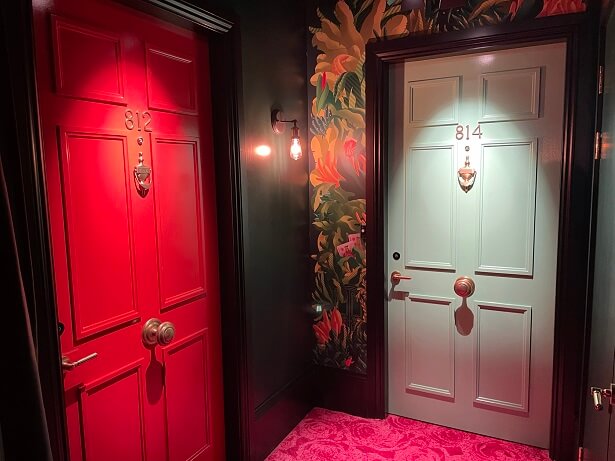 Inside the penthouse suite at nhow London

Each of the eight floors has a suite at the end of the corridor and my room – 814 – was the penthouse suite on the top floor. Every bedroom in nhow London hotel is styled like a traditional front door, with bright paint and a door knocker, and the penthouse has artwork around the door containing picture clues to films such as Lord of the Rings, The Lion, the Witch and the Wardrobe and Alice in Wonderland. 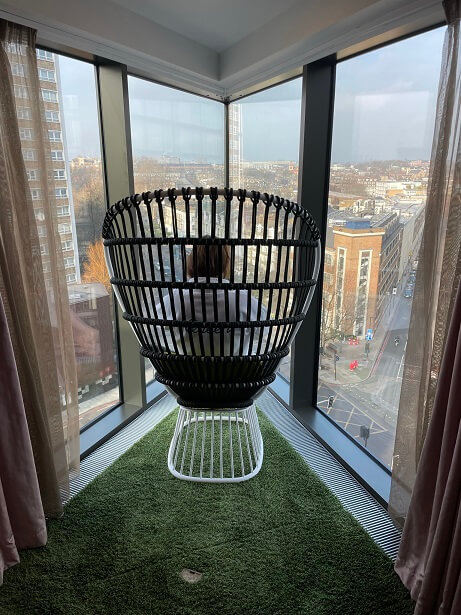 Soaking up the view at the end of the penthouse suite

Immediately inside there’s a small hallway and guest loo – very civilised – and then on opening the main door to the suite you are greeted with a seemingly vast amount of green carpet, styled (I assume) to look like grass on an open terrace. The design of the building means that the penthouse is actually triangular, so the walls of the suite meet in a sharp point overlooking City Road – a great chance to do your Titanic ‘I’m the King of the World!’ impression – and there’s a supporting structure in the middle containing the mini bar and tea and coffee-making facilities, so it’s quite an unusual layout. There’s certainly a fair amount of space though, including an eight-person dining table, a writing desk, a sofa, coffee table and a couple of basket chairs which make for a great vantage point to survey the view. 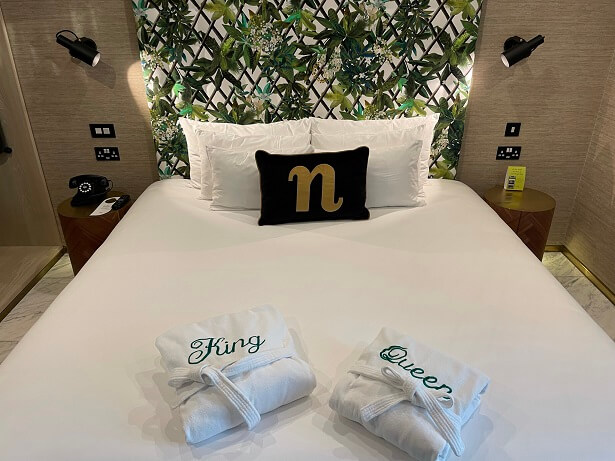 The bedroom itself is nicely laid out with a king-sized bed, large wardrobe and TV, and the room seamlessly links into the bathroom area with a stand-alone bath, walk-in shower, loo and blingy golden sink. While I’m still not convinced by baths in bedrooms, I liked this set-up where the bath is clearly in the bathroom area so you can have your privacy if you want (there’s a curtain you can draw across) but it’s also perfectly romantic if you like to hop between the bed and the bath.

The bedroom links seamlessly to the bathroom which contains a bath, shower, second loo and sink

As well as the bedrooms and the bar downstairs, nhow London has a gym in the basement which is set up with a ‘London theme’, from the Mind the Gap sign by the lift doors and metal grate entrance, to the sound of an approaching tube train playing constantly in the gym. There’s also some extremely green conference rooms, known as labs, with fun touches such as a working old-style Space Invaders machine. 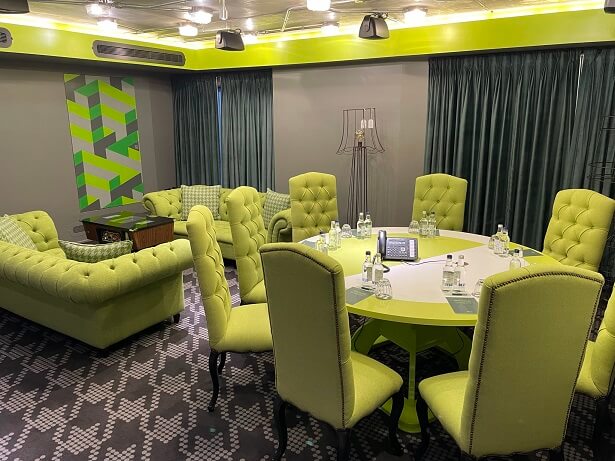 There are three differently-sized ‘lab’ meeting rooms at nhow London

I was in the mood for some relaxing though, so headed back to my room for a drink and some food on room service. 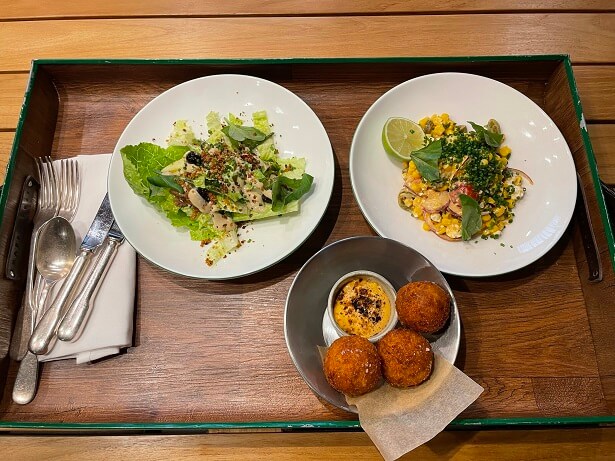 As the main restaurant at nhow London is being refurbished, cocktails and dinner were served in the main space downstairs. The food menu wasn’t extensive but contained some interesting suggestions such as a rosemary doughnut, a king prawn bao bun and sourdough pizzas. We tucked into roast porchetta and Cornish crab tagliolini which were perfectly acceptable although it will be a great addition to the hotel when the restaurant re-opens. The passionfruit martinis were excellent and set us up in good stead to head outside and check out the local nightlife. 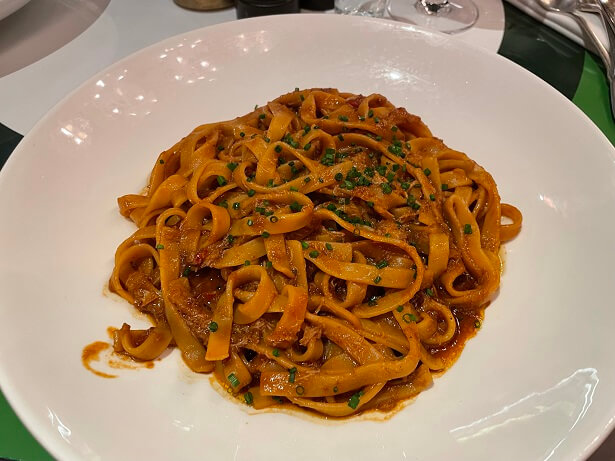 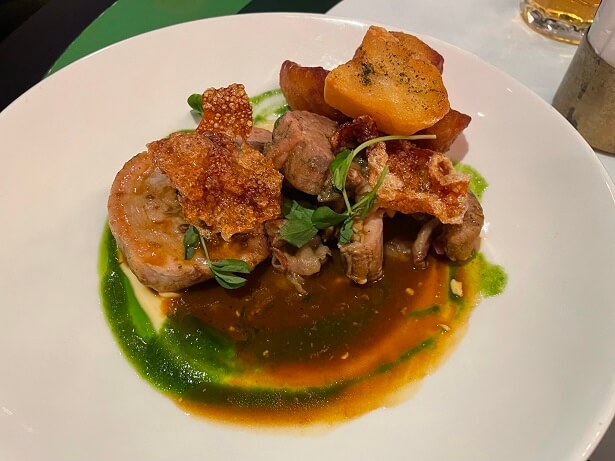 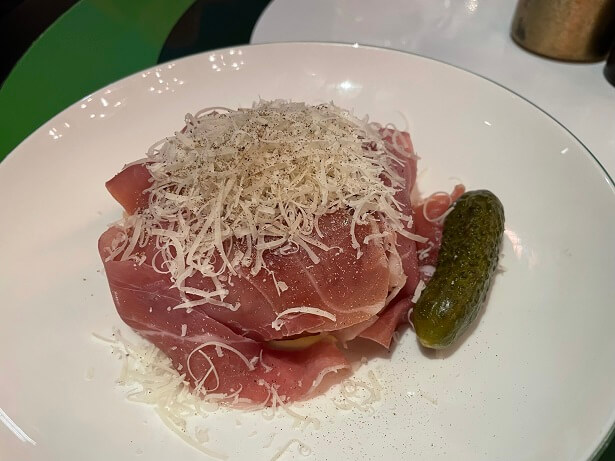 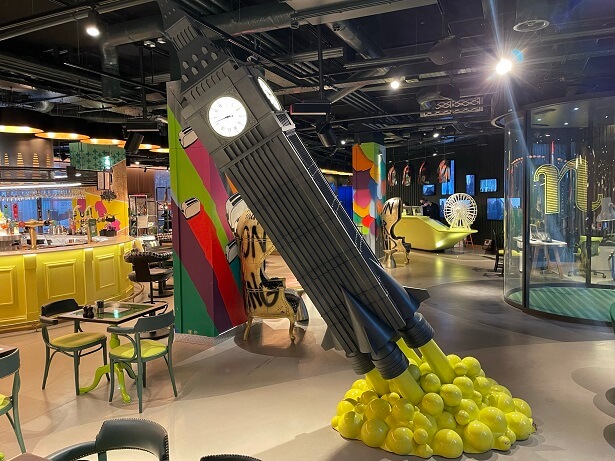 The great thing about nhow London hotel though is its location. Within just a couple of minutes you can walk to either Angel Islington and the bar and restaurants of Upper Street, or head in the other direction and in the same amount of time be in Old Street. We opted for Old Street and the London Cocktail Club and well, the less said about the rest of the night the better….

One of the many joys of a hotel stay is breakfast the following morning and we indulged in two full English breakfasts delivered by room service. The service was prompt and friendly and the coffee was good, but the food could only be described as adequate and until the full restaurant opens it might be best to try out some of the many fantastic brunch options available around Islington, Old Street and Shoreditch. 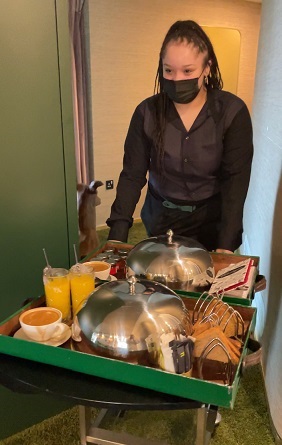 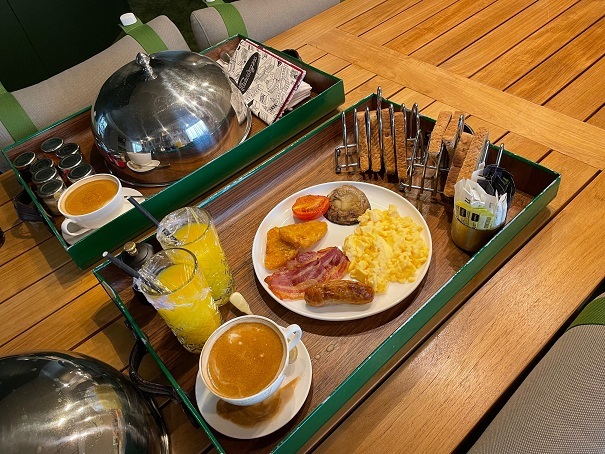 We opted for a full English breakfast with scrambled eggs, bacon, mushroom, sausage, hash browns and tomato, plus toast, orange juice and coffee

Given a late check out by the hotel, we headed out around 1pm for a lovely afternoon exploring this part of North London, from the Grand Union Canal to Exmouth Market – on Exmouth Market I can recommend both the excellent Cafe Kick which has been there for more than 20 years now and is still full of character, as well as the Pisco Sours at Mexican restaurant Taqueria. We ended up at the lovely canalside pub Plaquemine Lock which does jazz brunches, creole-inspired food and a great laid-back atmosphere – the perfect end to a lovely 24 hours in London which felt like far more. 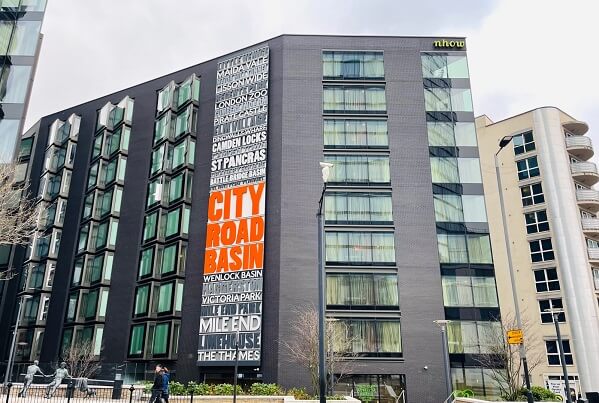 If you are looking to stay in a hotel in London, check out other reviews on ALadyofLeisure.com including: Mayfair Townhouse, Piccadilly; The Stafford hotel, Mayfair; The Corinthia hotel near Embankment; Montcalm Royal London, Moorgate; The Royal Horseguards hotel near Trafalgar Square; Bloomsbury hotel, Bloomsbury; Point A hotel, Kings Cross; One Aldwych, the Strand; St James’s hotel and club. St James’s; The Marylebone, Marylebone; The Kensington, South Kensington;