There are some hotels with spas and there are some hotels which ARE spas. Ragdale Hall spa in Leicestershire most definitely falls into the latter camp, making a spa break at Ragdale Hall a must for any spa fans. The moment you arrive you are greeted by the sight of guests walking around dressed in white fluffy dressing gowns (people wear these even at mealtimes) and the whole set-up is spa spa spa break all the way. 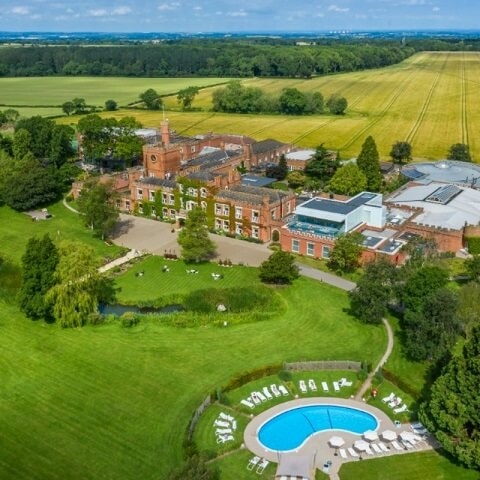 If you are a spa lover you will love Ragdale Hall – it’s one of the best spas in Leicestershire and will certainly make the list of best spas in the country – and if you are not a spa fan then, well, what on earth are you doing here? 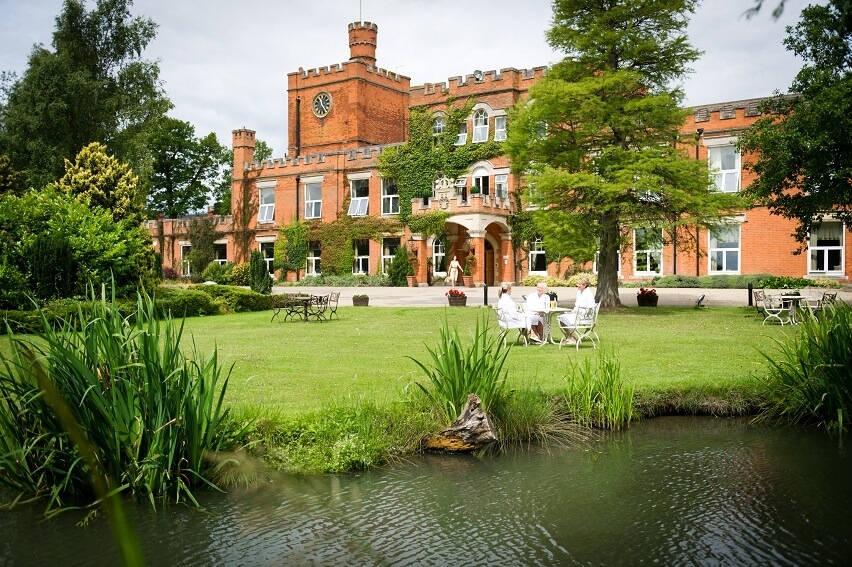 A spa break with a difference

Even veteran spa goers will be impressed at the size of the privately-owned, family-run Ragdale Hall. The hotel thoughtfully sent me a brochure and map of the hotel and health spa before my visit and I couldn’t quite believe how large the map of the place was. It’s not one of those hotel complexes where everything is miles away though, it just manages to pack an awful lot in.

If you love spa hotels – or hotels with great spas – then don’t miss out on these other great spa breaks:

It is also a great spa for singles and solo travellers if you are taking a spa break on your own, as there’s a social table at dinner so you don’t have to dine alone (but no-one will look at you strangely if you’d rather be on your own). 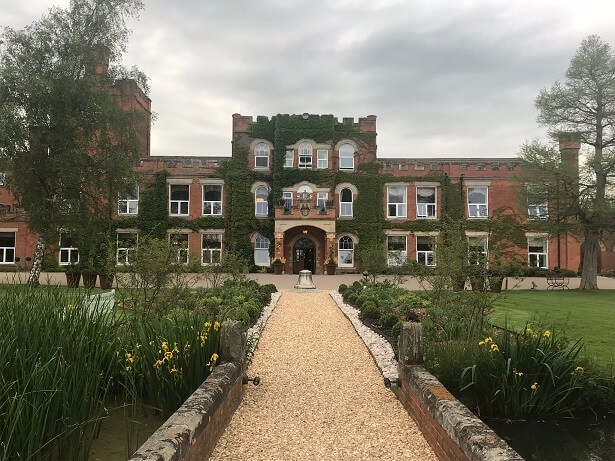 Ragdale Hall was originally a private country house but became a health spa in 1973 when it was bought by Slimming World. It was bought by its current owners in 1990.

You’ll find a large swimming pool at Ragdale Hall, but you’ll also find an exercise pool (with in-pool gym equipment, great for preventing stretched muscles). There’s a ‘mind gym’ complete with games and puzzles, and an actual gym, with a boggling array of the latest fitness technology. There’s a another pool, this time an infinity pool on the roof which overlooks the lush green Leicestershire countryside and Ragdale Hall’s outdoor pool. I started to lose track of the pools at this point (there are six in all). 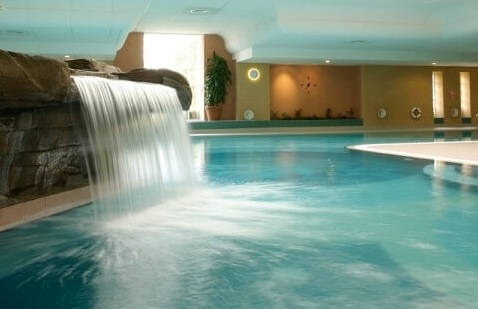 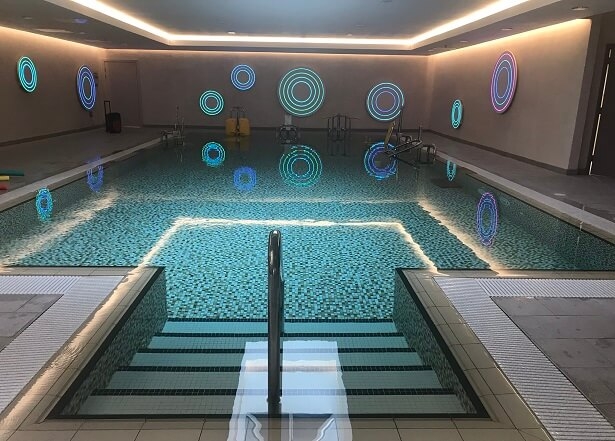 One of many swimming pools at Ragdale Hall

There are umpteen areas in which to sit or lie and relax – no fighting for loungers here – and a nail bar, boutique, restaurant and cafe. Last, but by no means least, there’s the centrepiece of the spa experience, the Thermal Spa, which contains a lazy river, outdoor hydrotherapy jets and trickling water features, plus a dozen or so wonderful and wacky ways in which to relax, from a volcanic salt bath to a ‘colourflow cave’, a underwater candle pool which is like a massive flotation bath, a thought zone, saunas, steam baths and tropical showers. You certainly won’t be bored at Ragdale Hall health spa and if you’re here just for the day you will definitely need to return. 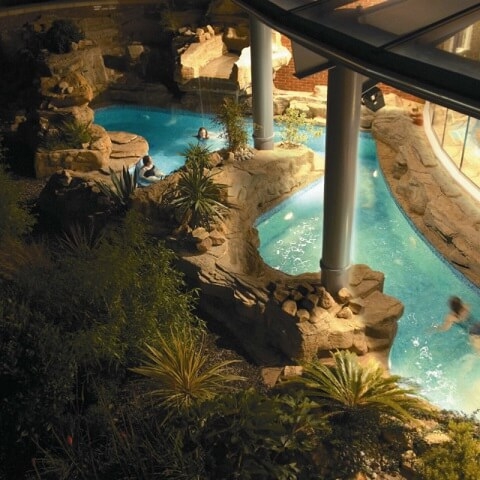 The lazy river in the Thermal Spa at Ragdale Hall 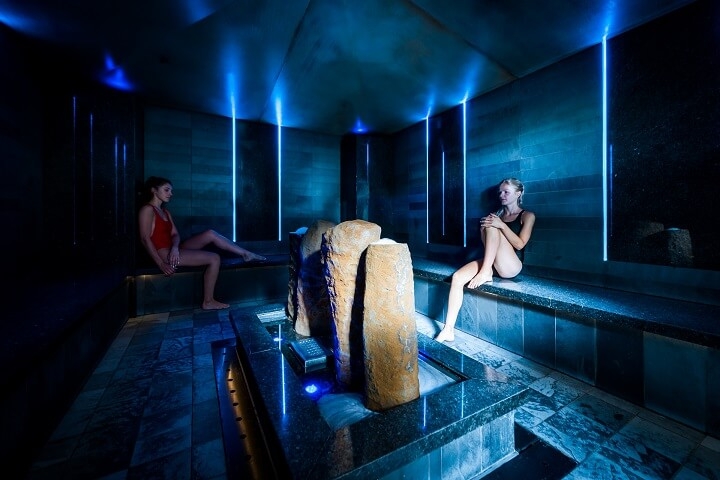 The volcanic salt room in the Thermal Spa at Ragdale Hall

Ragdale Hall is located just north of Leicester and just to the west of Melton Mowbray – of pork pie fame – and just minutes after arriving at reception our bags were being offloaded to be taken up to our rooms and someone was valet-parking our car. Seamless! (And even better, our car key came back tagged with its location in the car park in case we needed it, whereas so often valet cars just seem to disappear…). 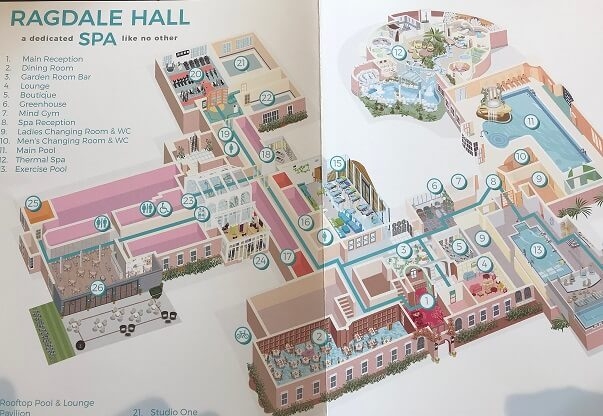 My map of Ragdale Hall. It looks terrifying but you will soon be very much at home here

We were just in time for lunch so made our way into the restaurant – all meals are included as part of the Ragdale Hall packages which is great, including the day of your arrival and depart – and enjoyed a healthy lunch while being pleased to see that wine and chocolate were still on the menu, no Mayr Clinic-style starvation here. 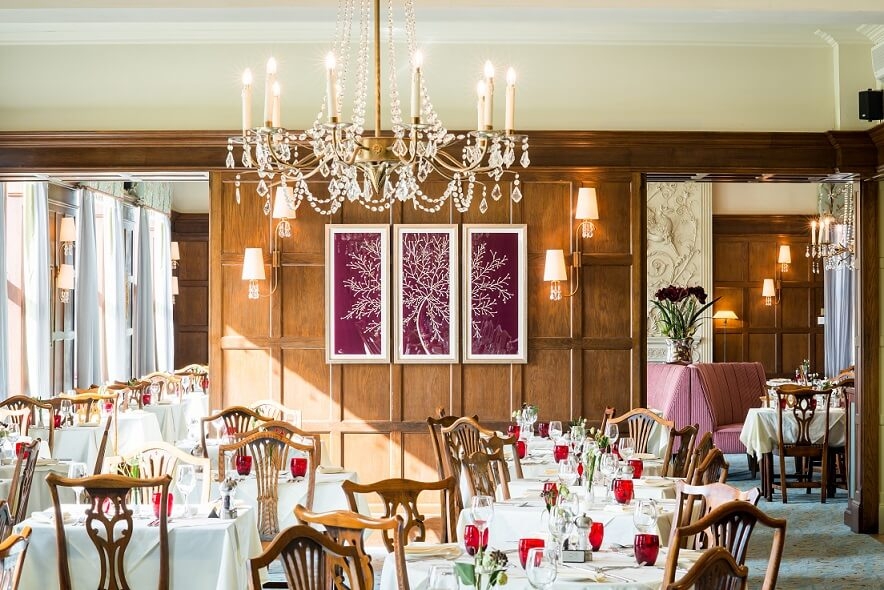 The dining room at Ragdale Hall hotel and spa is traditional but welcoming, with a social table if you are taking a spa break on your own

The restaurant decor was slightly old-fashioned, so don’t come here expecting boutique hotel chic vibes here, but that has the effect of making you feel very comfortable and relaxed from the off. It’s hard to look glamorous in white towelling robes anyway, but no-one was trying to dress up and it was clear all sizes, shapes and ages were welcome (although men were totally outnumbered: 90 per cent of guests are women though it looked more like 99 per cent). 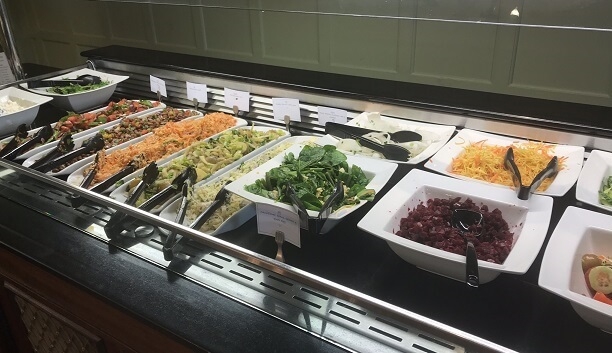 There were plenty of desserts available at Ragdale Hall

Getting our Ragdale Hall treatments

We just had time to change before heading back downstairs to the treatment area reception; a light and airy space with plants everywhere, where people waited to to be called for their massages. No sooner than we arrived than our names were called out and we were led off for our own treatments, marvelling at the efficiency of the system. 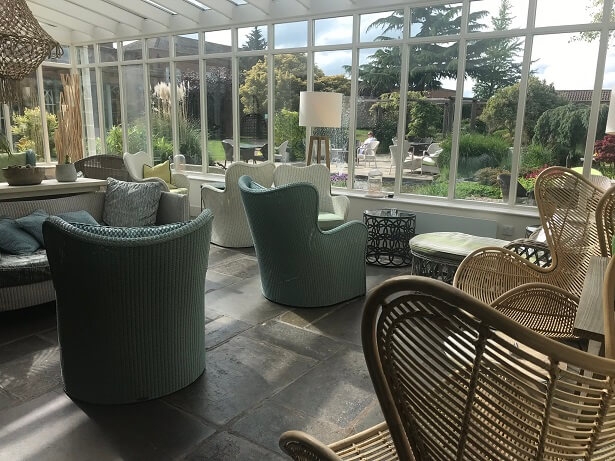 There are many places to relax in at Ragdale Hall

A home from home spa experience

There are 520 staff and 93 bedrooms, giving an impressive staff-to-guest ratio and probably helps give Ragdale Hall its 99 per cent daily occupancy. However thankfully due to its size, it didn’t feel crowded and while seeing people walk around purposefully at the start of your stay feels a little intimidating when you first arrive and don’t know where anything is, you’ll soon be treating the place like home. 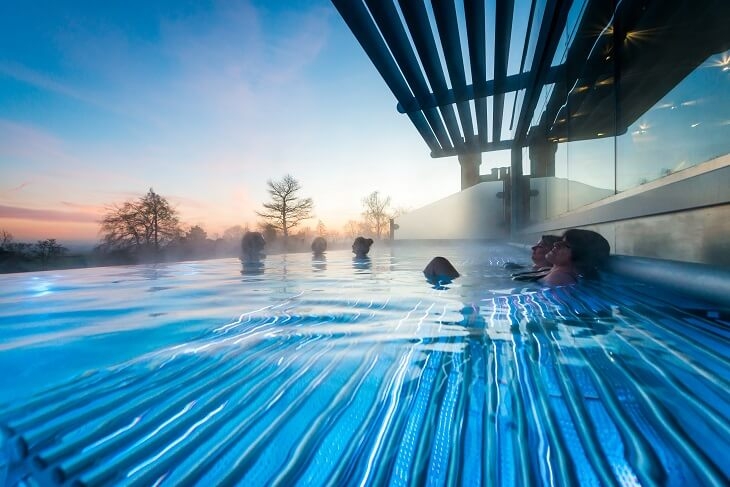 We were so relaxed after our excellent massages that it was tempting to fall asleep on a lounger, but I was determined to explore every inch of the Thermal Spa, from the salt bath to the candle pool (my personal favourite). Lying half-submerged in water heated to 34 degrees in a cave illuminated only by flickering candles was deeply relaxing and it was a wrench to leave for dinner (the spa is open until late so you can be there all night). 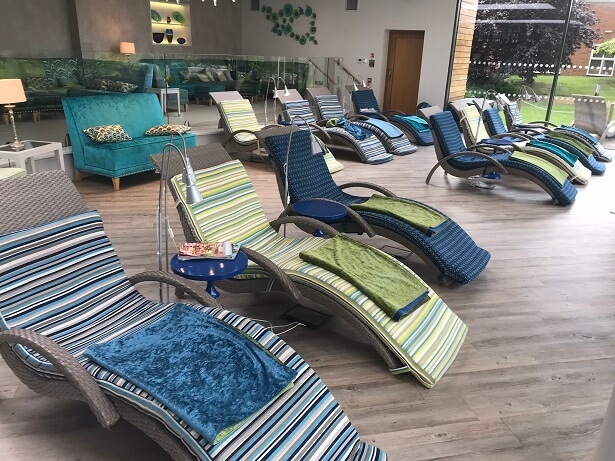 Dinner was back in the old-fashioned dining room and while the food and service were good, I think next time I’d like to try the more modern-looking Verandah Bar which does lighter options and where we had breakfast the next day. This part of the hotel feels more Soho Farmhouse/shabby chic with Scandi-style furnishing, several quiet rooms and lounges and was a nice contrast to the more traditional dining room. 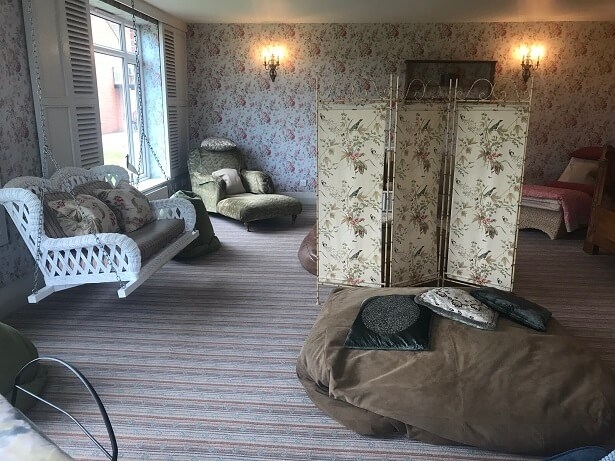 The quiet room at Ragdale Hall spa – not a sound is allowed, not even headphones or reading material

A great spa for singles

However one great aspect of meals at Ragdale Hall was the social table where solo diners (or friends looking to meet new people) could eat with other guests and judging by the table when we were dining there, it makes for a very lively and interesting meal and a great spa for people travelling on their own.

The dinner menu in the main dining room at Ragdale Hall 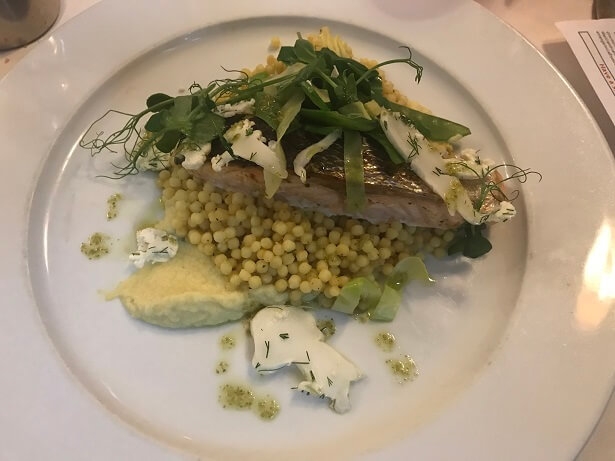 A healthy but tasty dinner at Ragdale Hall

There is a busy events programme and an evening of live music was on offer during our spa break at Ragdale Hall. However we were so relaxed that after dinner we just had enough energy to stagger upstairs to our bedroom to have a game of Scrabble before bed. Rock and roll! Thankfully there is no pressure to join in anything at Ragdale Hall and this is the kind of relaxing spa break where you can do absolutely nothing if you so choose. 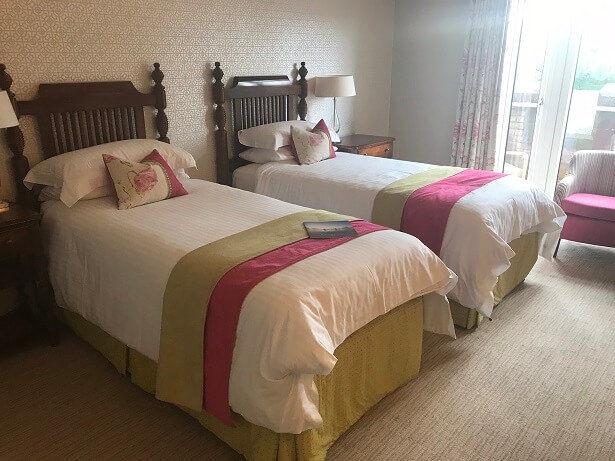 Our twin bedroom at Ragdale Hall had a balcony overlooking fields at the back of the hotel, and a good-sized bathroom

Breakfast in bed was a very popular option the next day with many on our corridor choosing to have breakfast delivered to their rooms. 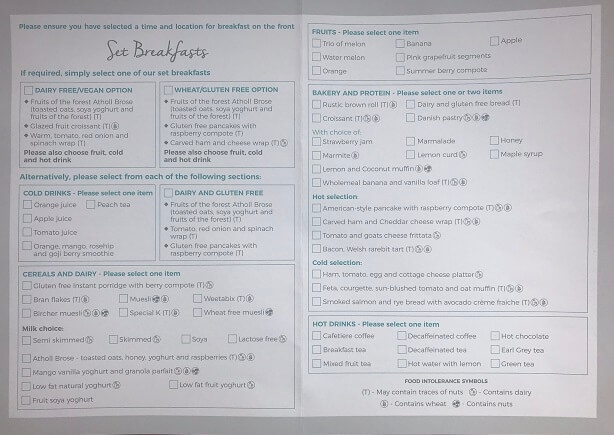 However we had ours in the Verandah Bar (you have to order from a list the night before) and it was probably the least successful meal, with coffee so weak it looked like tea, and some solid granola, but the smoked salmon and rye bread was great and the coffee was quickly replaced. 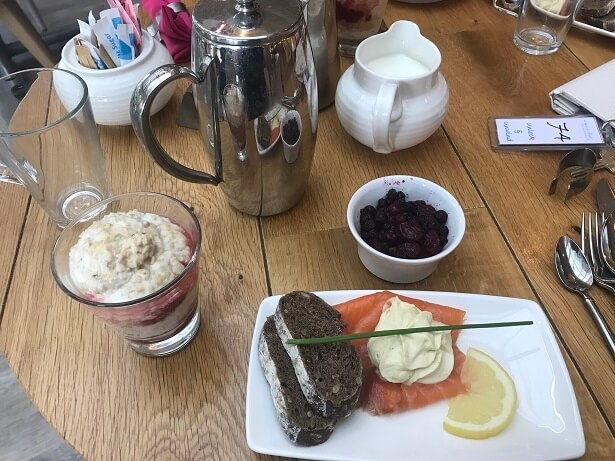 There was just enough time for another trip to the spa before we reluctantly packed our bags – one night is definitely not enough for a relaxing spa break at Ragdale Hall and like 80 per cent of its guests, we will most certainly be back. 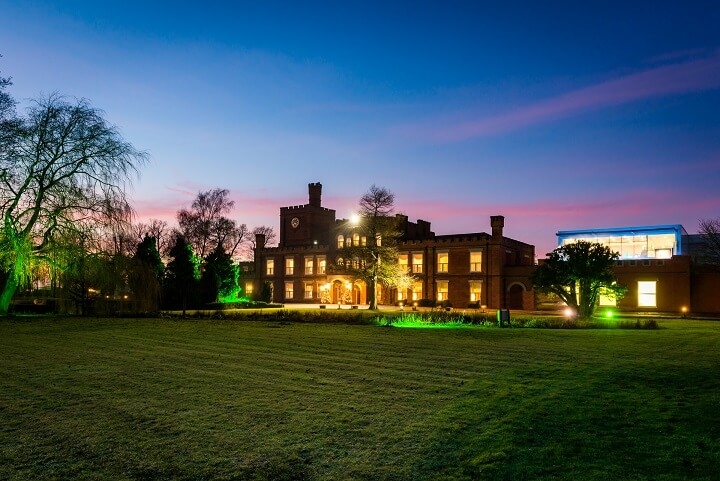 Getting to Ragdale Hall