The key to a memorable hotel stay is a great welcome and such was my arrival at the excellent Talbooth House and spa on the Essex/Suffolk border was that within ten minutes I felt utterly at home. 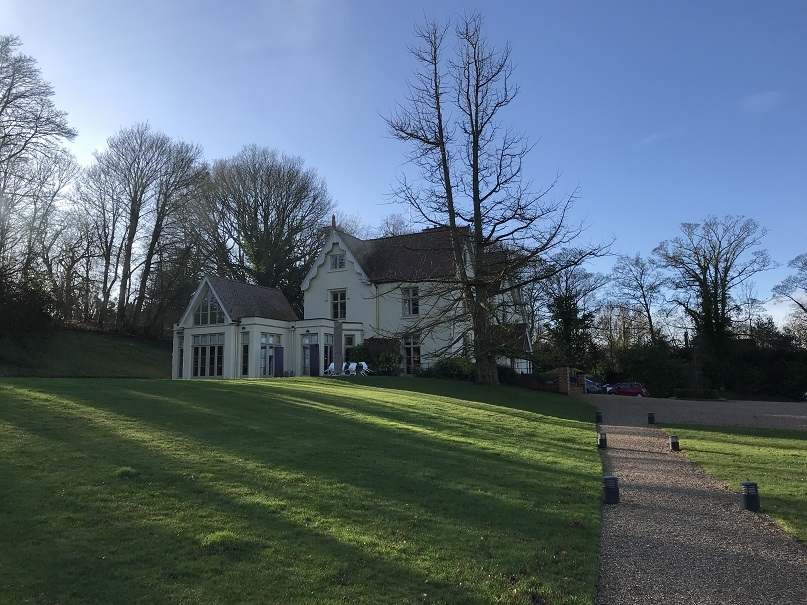 Arriving at Talbooth House and spa

The signs were good from the start, with a smooth check-in done in seconds in the entrance hall on an iPod, rather than having to stand at a reception desk filling out endless forms. Even better, once I was shown to my room I was invited to explore the rest of the 12-bedroom hotel as all the as yet occupied rooms had their doors left open, meaning you could have a good old nose around. 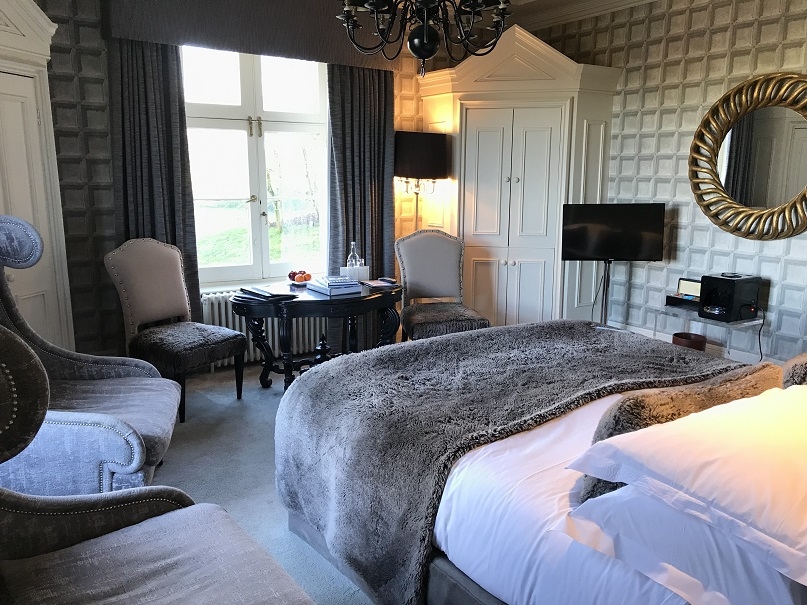 The rooms were all immaculate and individually-designed but shared a common look of serious luxury. This is the Shelley room which is a corner room overlooking the grounds towards the pool

In hotels as individually-designed as Talbooth House (which was called Maison Talbooth when I stayed and has since had a name change) it is great to be able to see what else is on offer for future trips (or even to change if you prefer another room which is free) and so I spent a happy half hour wandering between Shakespeare, Wordsworth, Betjeman and other poets who had given their names to each bedroom. Framed poetry from the bedroom poet was hanging on the bedroom wall, so being in Wordsworth, we got On Westminster Bridge and Daffodils, while our neighbours got Shakespeare’s sonnets. 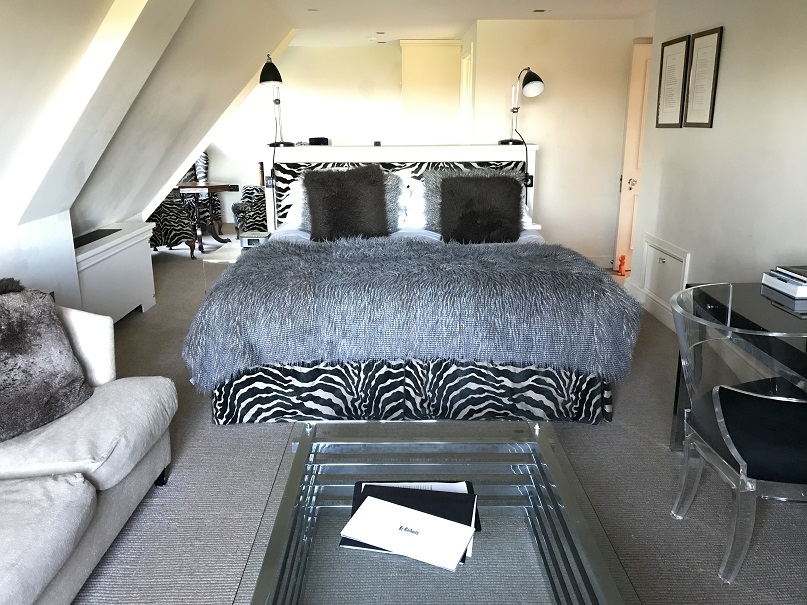 Each room, while different, had a luxurious feel, with thick carpets, immaculate furnishings and the soothing tones of Classic FM coming from every bedside digital radio. The rooms ranged from standard (Kipling) up through superior and deluxe and ended up with the Principal Suites of Shakespeare and Keats, both of which have their own private terrace.

Most of the bathrooms (like this one in Shelley) had walk-in showers, vast baths, his and hers sinks and all the toiletries, robes and fluffy towels you could wish for

Our room, Wordsworth, had great views of the green Essex countryside, an incredibly smart bathroom down a few steps with a vast bath, stand-alone shower and a selection of good quality toiletries, a separate twin-closet space with all the essentials such as a minibar with complimentary soft drinks and homemade biscuits, a coffee machine (fresh milk was available on request), hairdryer, iron and several plug points.

If you like feeling at home in a lovely country house hotel then here are some more reviews just for you: 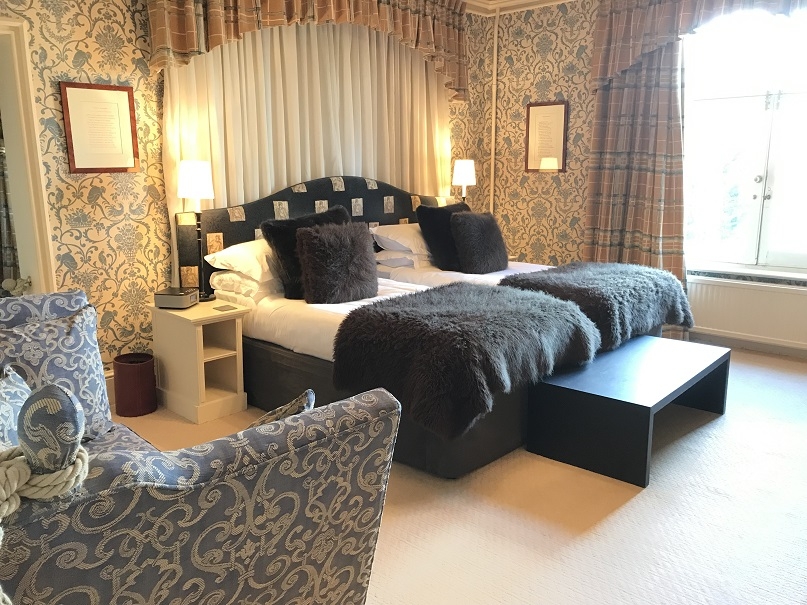 There is also a spa tucked away at the other side of the hotel with three treatments room where guests can indulge in all manner of massages, facials and beauty treatments. The hotel also does day spa packages including treatments and access to the swimming pool which seemed to be very popular as people were arriving for a day of pampering when we left the next day. The country house feel continues downstairs in the lounge which had a full-sized grand piano, a good selection of newspapers and magazines and was a popular spot for afternoon tea. 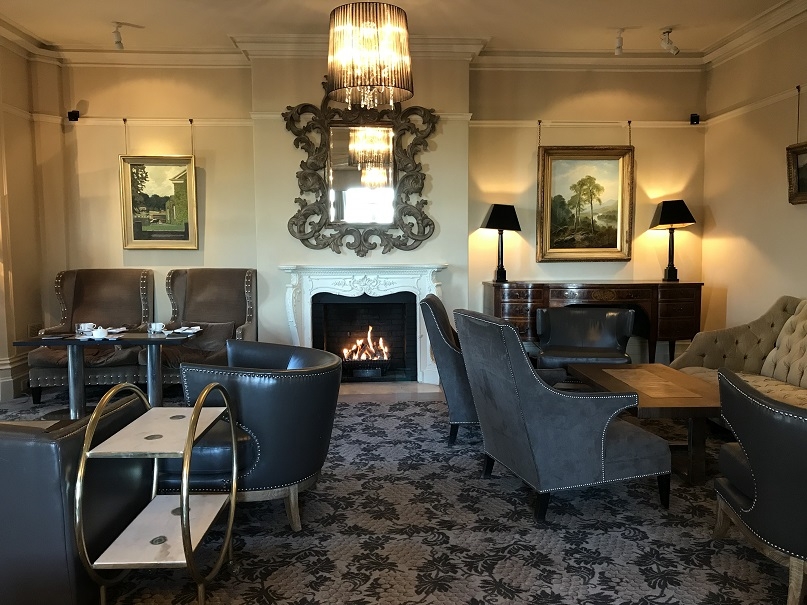 The lounge downstairs was a great place to unwind, read a book or indulge in some afternoon tea

While Talbooth House isn’t set in vast grounds, it has made good use of the acres it does have with a tennis court and, in a walled garden, an impressive pool house next to a ultra-modern outdoor heated swimming pool and hot tub. 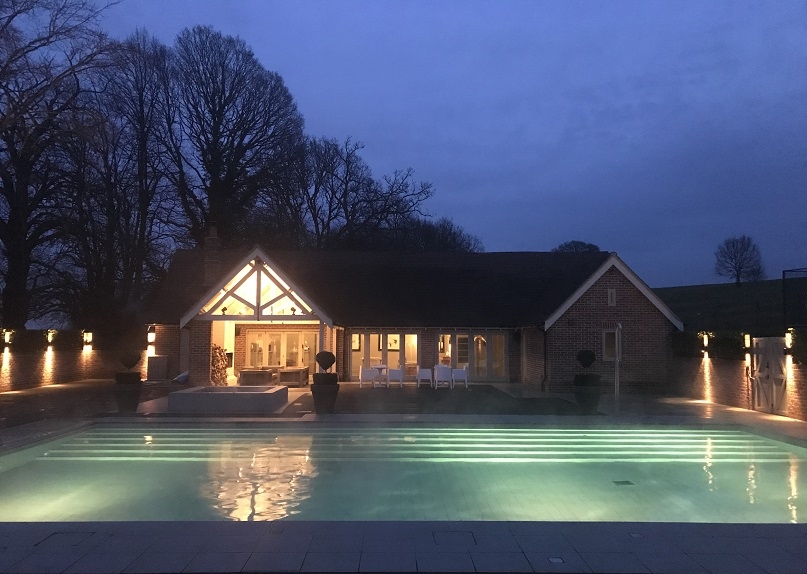 Just across the lawn from the hotel is a beautiful heated swimming pool in a walled garden, with a hot tub, decking, tastefully designed pool house and honesty bar

Swimming outdoors in a January evening isn’t something I undertake lightly but walking along the spotlit path in the frosty blackness towards the steaming pool wasn’t to be missed, and spending a balmy summer’s evening in the pool and beautifully-designed pool house (which has its own honesty bar) would really be something. 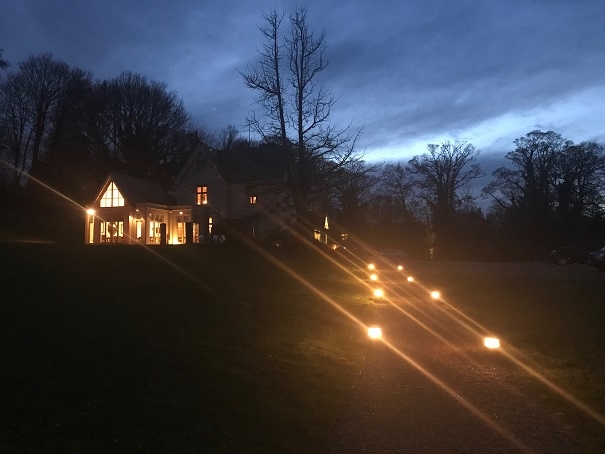 Dinner wasn’t in the hotel itself but at Talbooth House’s nearby sister restaurant, Le Talbooth, which sounds like it could be a effort but really isn’t, with a staff member ready to drive you in chauffered comfort the 30 seconds or so it takes to cruise down the road to the restaurant. Le Talbooth itself is a stunning half-timbered building on the banks of the River Stour, the border between Essex and neighbouring Suffolk and was actually the first site in what became Milsom Hotels & Restaurants group. 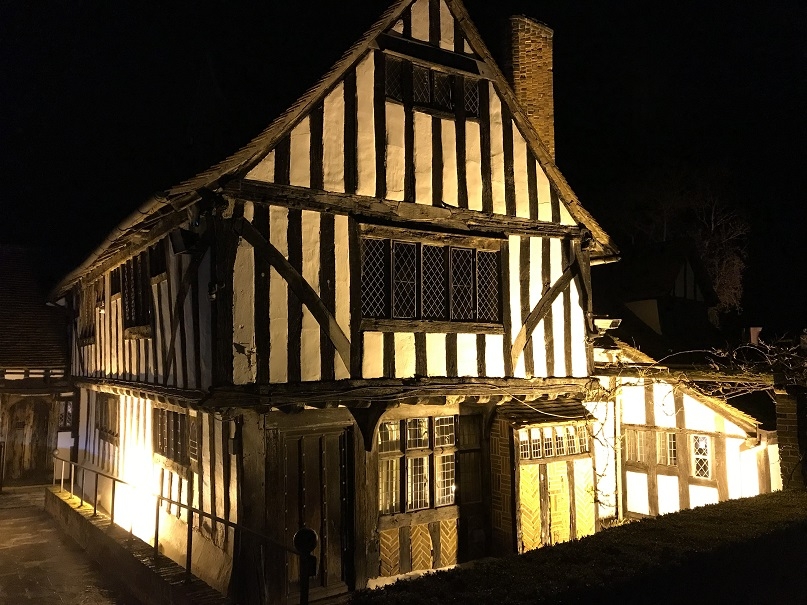 Le Talbooth was just a tearoom when acquired by the late Gerald Milsom in 1952, who then bought Maison Talbooth in 1969 and established it as a luxury hotel. Later on he added The Pier seafood restaurant in Harwich and his son and daughter-in-law Paul and Geraldine Milsom opened hotel and restaurant Milsoms, which is just down the road.

Le Talbooth itself was faultless: a charming, cosy room where the service was impeccable – attentive without being bothersome. What seemed to be an all-female staff glided noiselessly about the restaurant anticipating to the second the right moment you wanted to order, or have the plates cleared, and I can’t remember a better service in a restaurant. 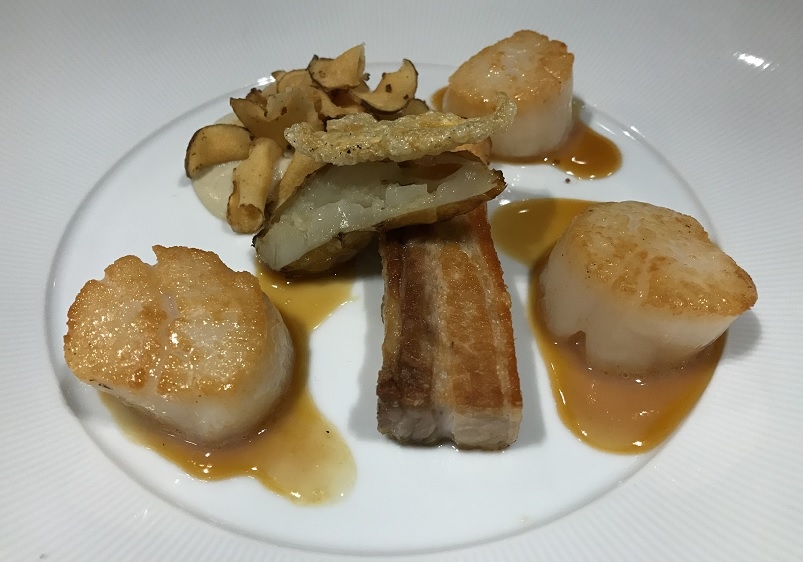 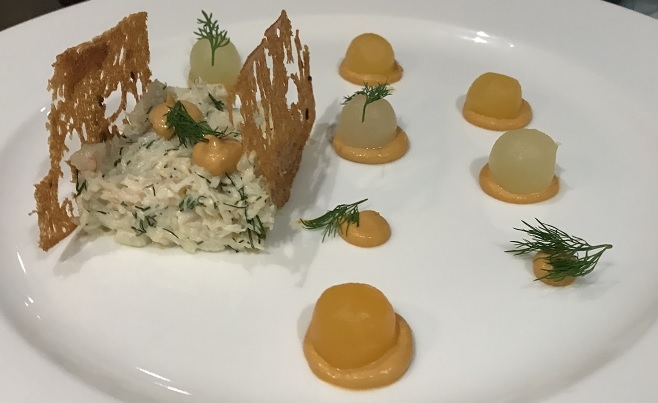 The top notch food matched the service and every dish was a delight, beginning with excellent starters of pan seared scallops with pork belly – juicy, succulent, delicious – and Mersea crab mayonnaise with melon, wasabi and sardine dressing. The dishes tasted as good as they looked and would have been the highlight of the meal were it not for the superb Dedham Vale Chateaubriand which was carved in the restaurant and done to perfection. This isn’t a restaurant where you would dine everyday but for special occasions, romantic evenings or for an occasion treat I would say it’s the perfect place – and there’s a terrace overlooking the river for summer dining. 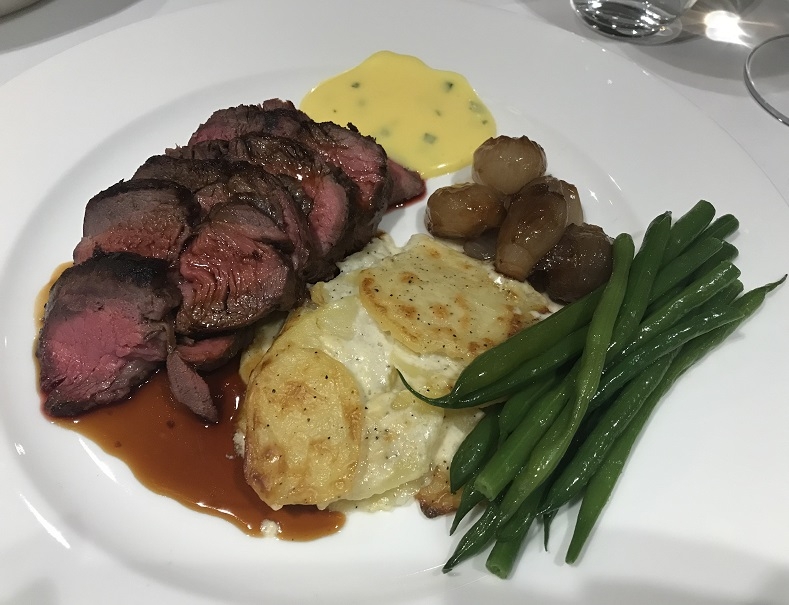 After that we were almost done but we did manage to share a vast but delicious passion fruit souffle before coffee, petit fours and the arrival of Amelia to whisk  us back to Talbooth House. 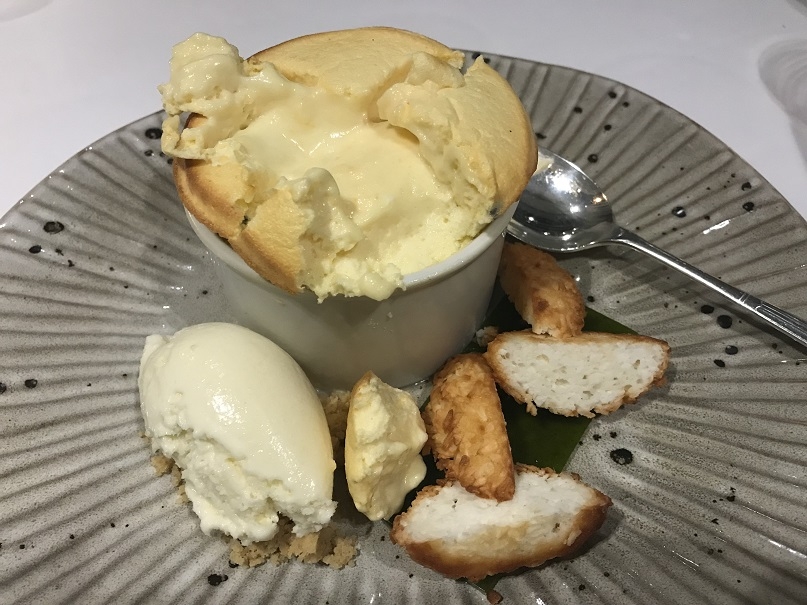 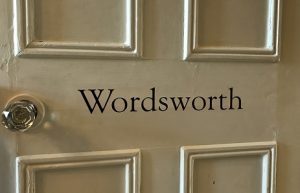 We were reluctant to leave the following day

A night at Talbooth House

A dreamless sleep followed and then the sad realisation that we had to leave this deeply relaxing hotel and venture back out into the real world. The only disappointment in our otherwise excellent stay was breakfast which – possibly because the hotel isn’t set up for a full dining experience – wasn’t great: the pancake with banana and bacon was stone-cold while the poached egg and avocado on sour dough – usually my favourite breakfast – was ruined by the inexplicable addition of chilli jam, which wasn’t on the menu and made the whole thing overpoweringly sweet. In the interests of balance, the woman across from us said she’d enjoyed the avocado, so it is maybe a matter of taste.  However the rather plain breakfast room does lack the charm of the rest of the hotel but might come alive in the summer months. 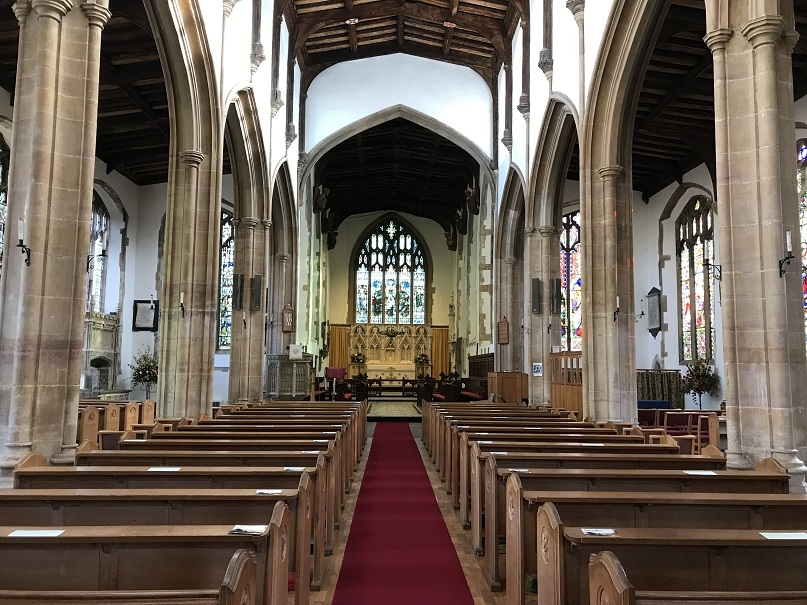 Thankfully it was a small blip in what had been a lovely visit and I would wholeheartedly recommend a stay here, with La Talbooth not to be missed. Talbooth House itself is just a few minutes drive from the beautiful village of Dedham, whose tea shops, vast arts and crafts centre and stunning church (with a painting, The Resurrection, by local boy John Constable) made it a great place to spend the morning and keep the sense of luxury and relaxation from a stay at Talbooth House going for a few hours longer.

Talbooth House and Le Talbooth are part of the Milsom Hotels group which includes Kesgrave Hall. Talbooth House is a member of the luxury hotels group Pride of Britain Hotels. Other Pride of Britain Hotels properties reviewed by ALadyofLeisure.com include: Lucknam Park, Gravetye Manor in West Sussex (both with Michelin stars), Bailiffscourt in West Sussex near Littlehampton and Park House hotel near Midhurst.