If your idea of a perfect country break is to have breakfast in the sun on a terrace overlooking a spectacular view, followed by a day lounging in a luxury spa, then Danesfield House hotel and spa in Buckinghamshire is just the place for you. 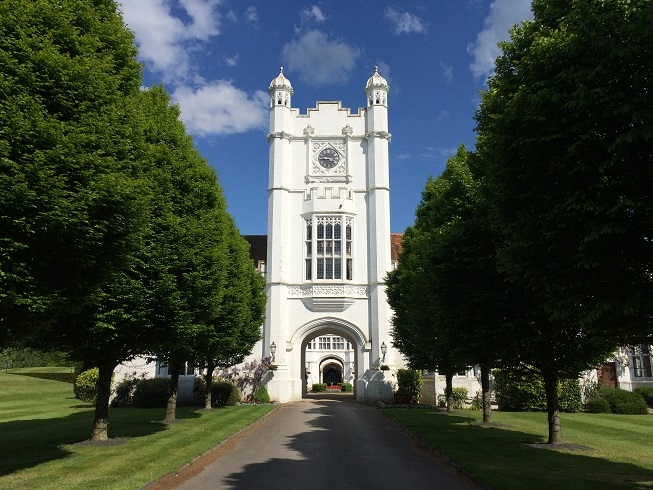 The first sight of Danesfield House

To say that it reminded me of Cliveden, just a few miles away, is high praise indeed: while it doesn’t have the grandeur, scale or history of its neighbour, there are many similarities: they both have a beautiful terrace surrounded by ornate gardens, a view of the river Thames sparkling below, a light and airy restaurant which makes the most of their locations and both have excellent spas with proper swimming pools and outside loungers for those perfect summer days. 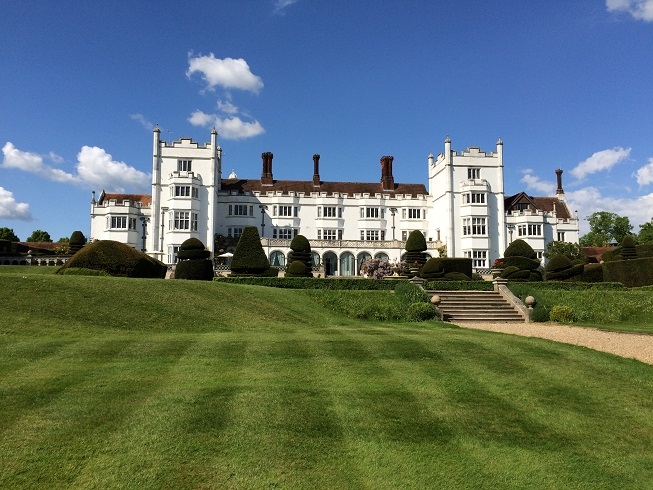 Danesfield House is surrounded by 65 acres of lawns and woodland

Just a few miles from the pretty town of Marlow, Danesfield House with 79 rooms and suites is set in 65 acres of grounds, and the entrance is rather impressive, a gravel drive passing beneath a stone archway into a courtyard. 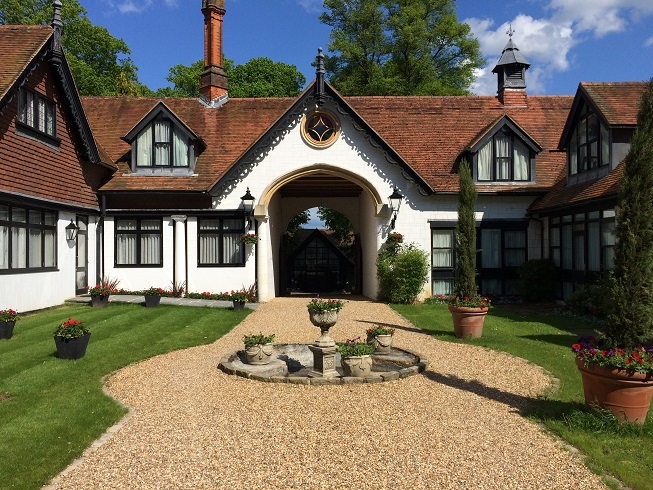 My room was in the recently refurbished Stable Courtyard, and was more like an apartment, with a downstairs lounge containing a sofa bed, TV, fridge and separate loo. Up the smart, glass-sided stairs was an ante-room containing fitted wardrobes and a standalone bath, off which was a walk-in shower room on one side, and the bedroom on the other, with a vast, mirror-backed double bed. 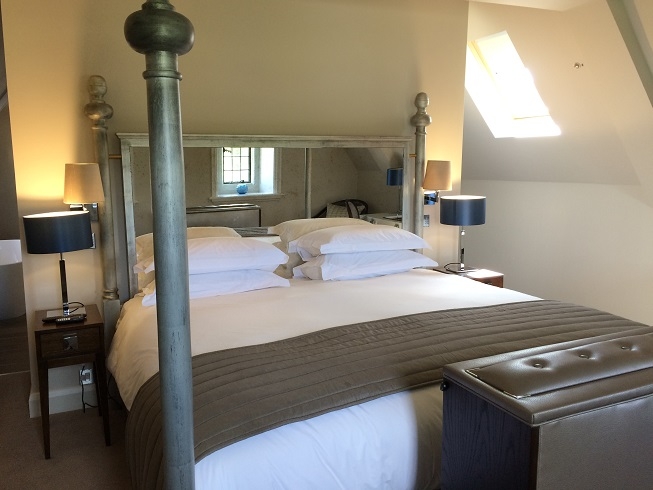 My double bed in one of the Stable Courtyard suites – just round the sides of the bed were fitted wardrobes, a free-standing bath and a bathroom with walk-in shower 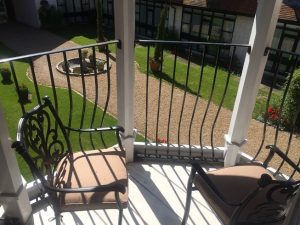 There were nice little touches in the design of the courtyard, including a little turret where two people could sit outside and watch the world go by.

The main building dates from 1901 and was requisitioned by the army in the Second World War, and certainly the vast front lounge has a more formal feel of a traditional country house.

We had a look around the bedrooms in the main building as well and found that there was a wide choice of styles, including some with impressive four-poster beds. The views from the front of the building over the Thames were also a great appeal.

Some of the rooms in the main building are more formal, some with impressive four-poster beds 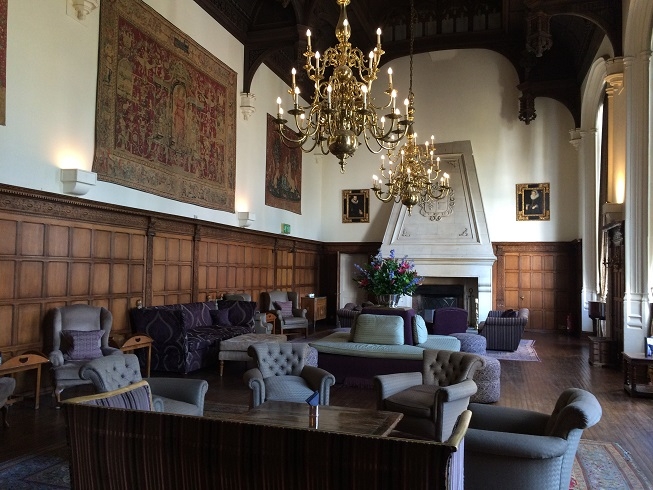 The spa at Danesfield House

However the spa, which is connected to the main building via a glass walkway, but which also has its own car park for day guests and club members, is extremely modern-looking, with a 20 metre indoor swimming pool, steam room, sauna, jacuzzi and bar where you can order G&Ts to be delivered to you while you sunbathe on the lawn outside. 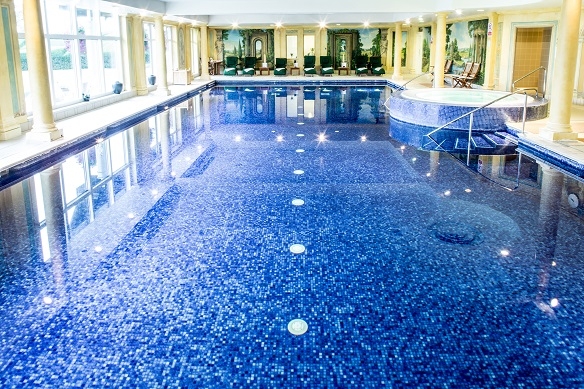 The spa has a swimming pool, sauna, steam room and jacuzzi… 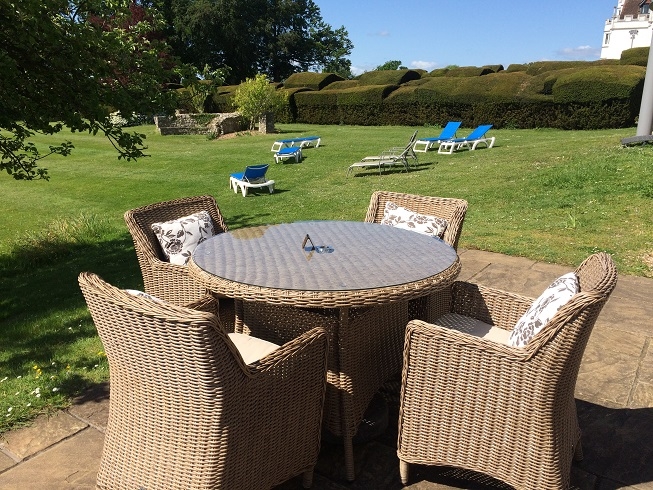 … and lots of outside space for sunbathing

The grounds are a mixture of landscaped gardens, woods, parkland and mown lawns and are well worth an explore, even though it was hard to get a definitive answer from the hotel staff whether you could walk down to the Thames or not (two said yes, two said no, and one admitted that the hotel’s walking map needed updating). However there were great views along the River Thames – Danesfield is handily located near a bend so you can see all the way along the river. 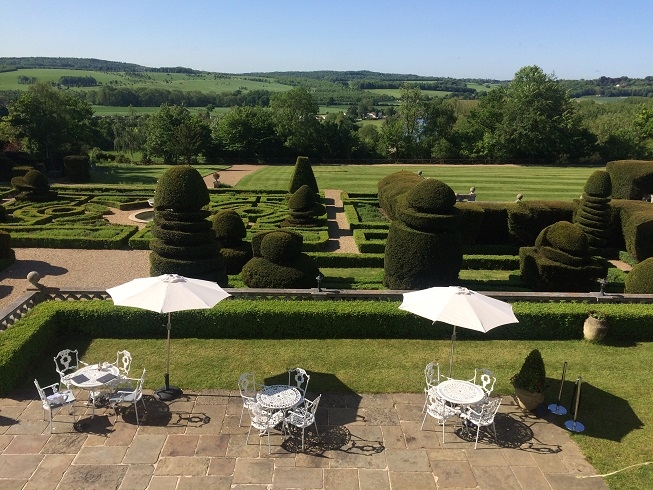 The gardens and terrace from the main building 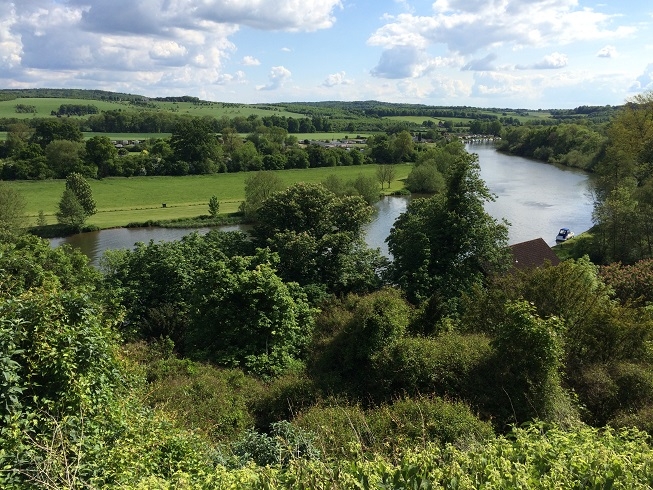 The gardens at Danesfield overlook the River Thames

The restaurant at Danesfield House

All that relaxing and walking meant we had worked up an appetite for dinner which was just as well as we happily worked our way through the menu, from woodland mushroom risotto and fish soup starters, through to cod and fillet of beef and ending on desserts of glazed raspberries and rhubarb crumble parfait. Once owner of a Michelin star, Danesfield House has decided not to try and get it back again (its formal dining room only has 18 tables) but has gone for something with a more general appeal. 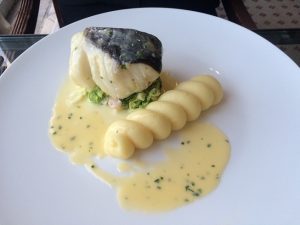 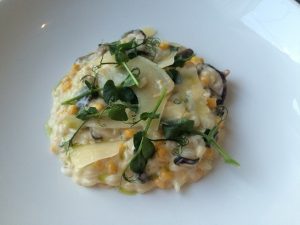 Some dishes were better than others – the fish soup and the fillet of beef were particularly good, while the risotto was swamped with sweetcorn and didn’t taste of woodland mushrooms at all – but the wine was excellent and service was fast and friendly. 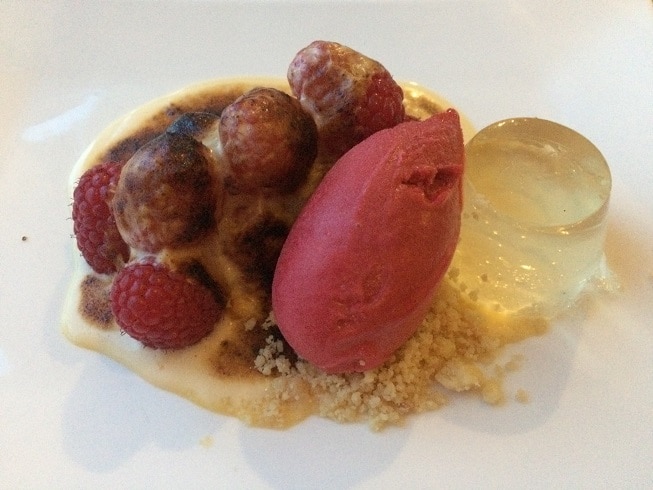 We ended the evening with a couple of cocktails in the small bar next to the restaurant –  the lighting needs reworking to create an atmosphere more befitting of the drinks which were very good – and slept well, although the open-plan layout of the bedroom meant that I was woken up at dawn from light flooding in from the bathroom window which had net curtains but no blinds.

Breakfast on the terrace in the sun was a great way to start the day and then after a quick tour round the rooms in the main house – some of which had access to the first floor terrace, and other had formal four-poster beds – it was back to the spa. 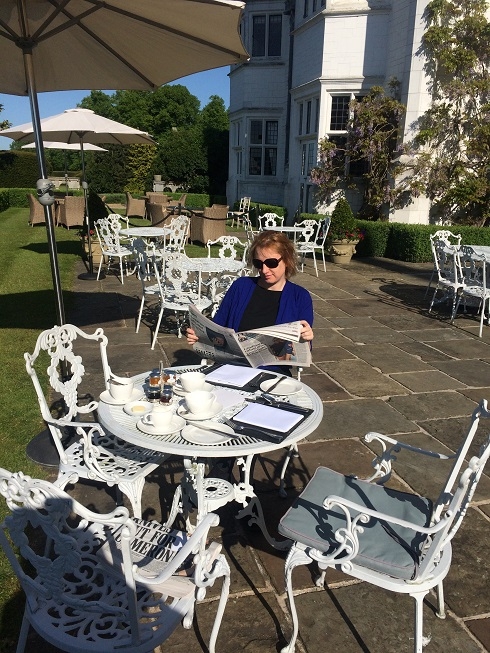 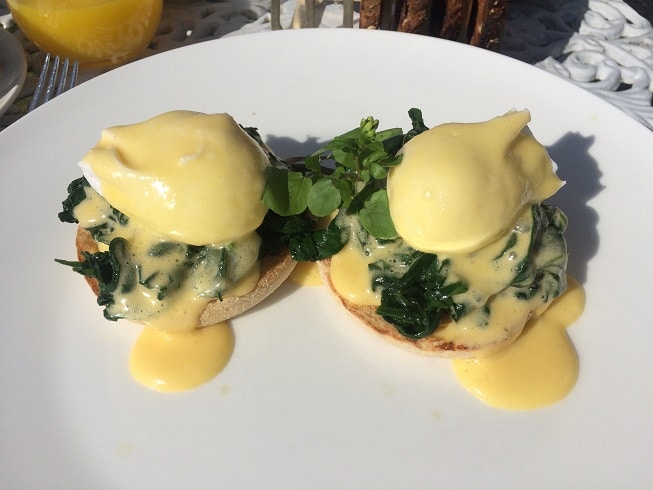 Courtyard room from £214 per night, Garden Suite from £309 and Stable Duplex Suite from £999 per night, all including breakfast and use of spa facilities.

If you like luxury hotels in Buckinghamshire then here are some other hotels you should take a look at… My stay at Cliveden House hotel: favourite of poets, players and princesses; Bond, Bridget and me: my stay at the luxury Stoke Park hotel; Hartwell House, Buckinghamshire: a stay with the Downton Abbey factor