The sense of excitement is as tangible as the ever-present smell of frangipani and hibiscus flowers. Mauritius is finally open once again.

From airport staff to taxi drivers, stall holders and restaurant staff, hotel owners, fishermen, massage therapists, musicians and even magicians, the response to the lifting of quarantine restrictions and the reopening of borders is almost universal delight. 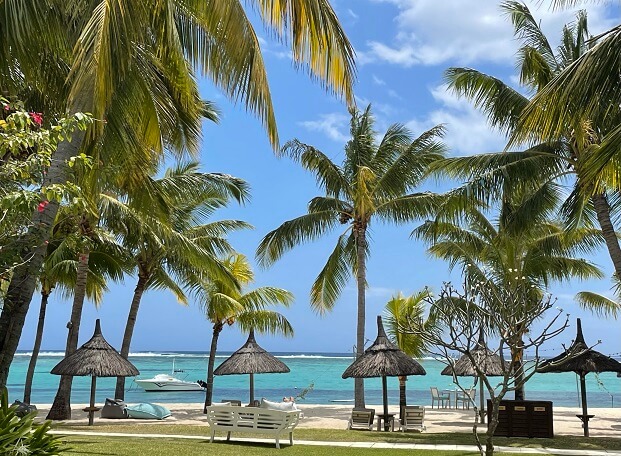 ‘It was just dead when the tourists weren’t here,’ says my driver, John Noel. ‘I missed driving people around and showing off my country, and the whole island depends on the tourism sector. It’s great that the island is reopening and people are coming back on holiday here.’

Check out my other great articles on holidaying in Mauritius:
The best luxury hotels in Mauritius to add to your wish list
Rum, yoga and dolphins: my action-packed holiday in Mauritius

Mauritius has a population of 1.3 million people and pre-Covid, 1.3 million tourists would visit these shores, spending money across the whole hospitality supply chain. When the tourist tap was switched off, everything stopped.

‘You can’t imagine what it was like,’ says Jérémie de Fombelle, general manager of the five-star hotel Lux Le Morne, chatting in the afternoon sunshine on the beach while enjoying fresh sea urchin and homemade rum.

‘It was so sad to see the island so quiet, so it’s a massive source of joy that we are reopening once again, although there’s a certain amount of apprehension too. But the demand for holidays in Mauritius is definitely there – we’re going to be almost full soon.’ 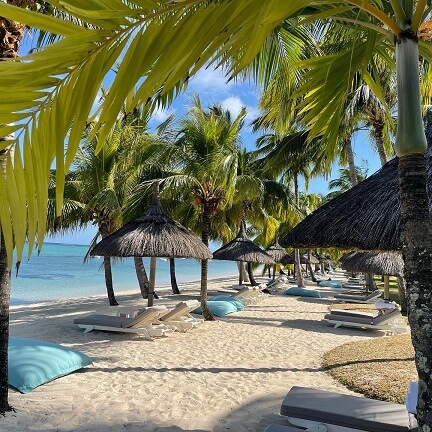 Empty loungers await returning holidaymakers at the beach at Lux Le Morne, a five-star resort on the west coast of Mauritius

It’s quite a change for the Lux Le Morne, which was forced, like the whole hospitality industry, to close during Mauritius’ lockdowns. The hotel made the most of it though, undergoing a massive refurbishment with all locally-sourced materials and furloughed staff taking on totally different roles; chefs became carpenters, waiters learned to sand wood and public relations manager Julia Marimootoo worked as a hotel gardener.

‘We had all 300 staff here every day working on the hotel,’ says Julia. ‘Everyone now knows how everything works and we also know each other more – it was like six months of team building.’

As well as taking the opportunity to refurbish and redevelop while guests were absent, many resorts acted as quarantine hotels – like the Trou aux Biches Beachcomber, where I quarantined – or, like the Preskil Island Resort, were part of the government’s contact tracing scheme, where locals were taken if they tested positive. 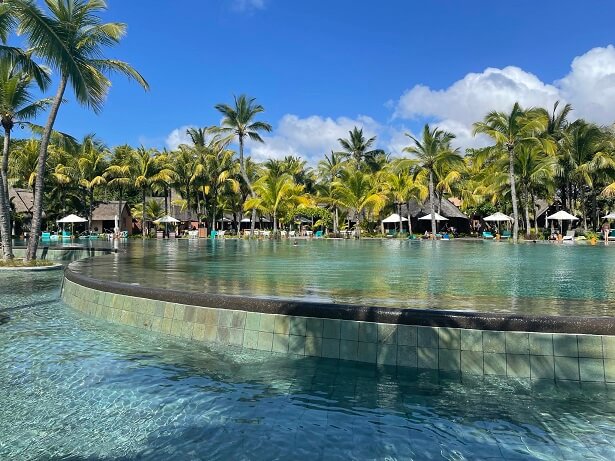 Many hotels opened just at weekends for Mauritian residents, giving heavy discounts to locals, as any income was better than nothing. Some hotels were really lucky: the opulent Constance Prince Maurice was full for three months while hosting Netflix production Resort to Love (the hotel itself was a location in the film, which starred Christine Mulian). Others, such as the smaller Maison d’Dete hotel, were too small to open during quarantine and closed entirely. 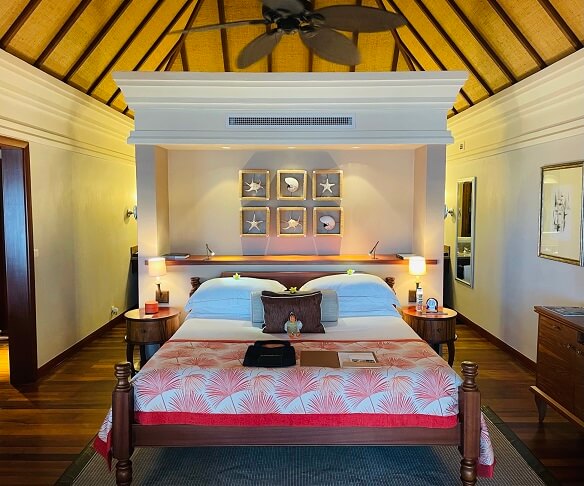 My stunning bedroom at the Constance Prince Maurice luxury hotel

With tourism accounting for more than 25 per cent of Mauritius’ GDP, the idea of missing yet another crucial summer season (Mauritius’ busiest season as Europeans flock for some winter sunshine) was unthinkable, and with the vaccination rollout ahead of schedule – 86 per cent of Mauritians are now vaccinated – the sense of relief is palpable. 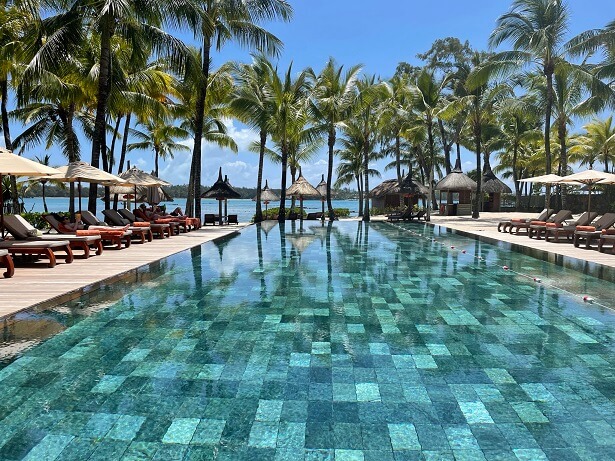 Every flight overhead is greeted with smiles and waves – ‘It’s so lovely seeing the planes overhead once more,’ says Jenna Perrier of Anantara Iko hotel, just ten minutes from the Sir Seewoosagur Ramgoolam international airport, as she waves at an incoming Air Mauritius flight – and every waiter I speak to says how pleased they are to be back at work once more.

‘A hotel is like an old car – you have to keep the engine turning else it breaks down,’ says Jason Barry, group head of marketing at Sun Resorts which runs the Sugar Beach and Long Beach hotels on the east and west coasts of Mauritius.

‘Hotels are part of the communities on the island and without work and money coming in, families really suffer. It was so sad to see the local shops and restaurants shuttered but now it’s really starting to pick up.’ 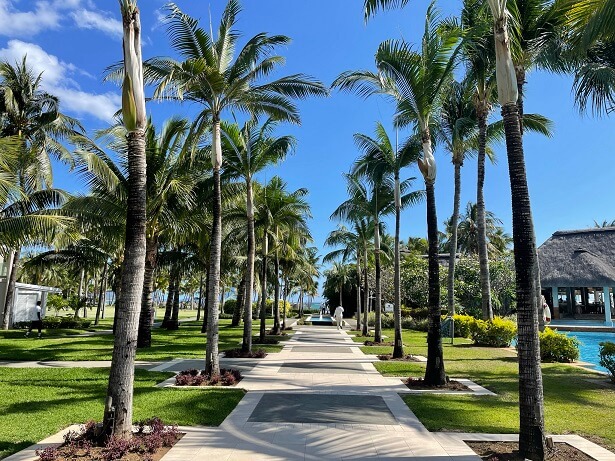 The avenue which runs through the heart of Sugar Beach resort

Arriving in Mauritius in the first time for almost a year, the change is dramatic. When I visited last November, I spent three hours waiting in a crowded minibus at the airport before being transferred across the island with a police escort, to a hotel room where I would spend the next 14 days. Yes, one hotel room, 14 days, 42 meals, 14 daily temperature checks and three PCR tests (on days 0, 7 and 14). Read about my quarantine experience

It wasn’t a terrible two weeks – I was quarantining in a five-star hotel room with a balcony after all – but I was certainly very keen to leave on the final day (when I was woken for my test at 6am and not allowed to leave until 6pm – that was a long day).

It’s a very different story these days. Passengers armed with a recent PCR test and Covid insurance go straight to their hotels where they are given a rapid flow test on arrival, and get the all-clear within minutes.

Non-hotel residents get a test straightaway at the airport. There’s another test on day 5 but again, it’s quick, free and easy and means you can be enjoying a cocktail on the beach in 28 degree heat almost the moment you check in – a fact not lost on the British who are by far the large group of holidaymakers coming onto the island. 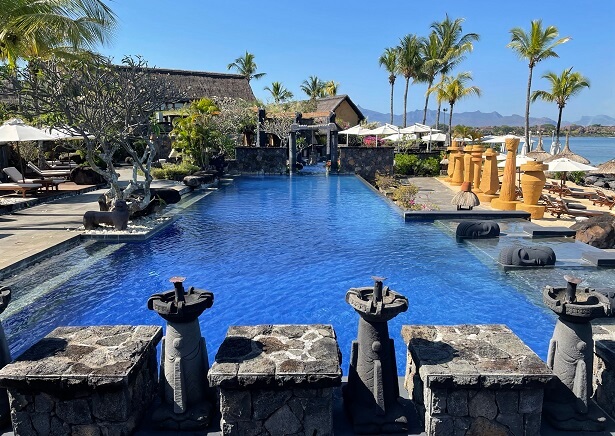 An inviting pool at Oberoi resort, on the north west coast

Two indifferent summers and the ever-changing traffic light system have left Brits desperate for some winter sun, with thousands arriving in the first few weeks alone.

To find out just who was travelling, I drove to the airport on the October 1 and was greeted by a riot of noise and colour. The airport had put on a traditional celebratory welcome of Sega dancers and drummers – a dance which originated from African slaves working on the sugar cane plantations – for the first planeloads of passengers coming via Dubai and Paris and early passengers off the plane were greeted not only by the music and dancing, but by the excitable press pack who jumped on each new arrival.

Among the incoming holidaymakers were British couple Alexander and Philippa Hutchison from Durham, who were married two days before and honeymooning for 11 days in Mauritius. As well as the beaches, sunshine and luxury resorts, the dropping of quarantine was a huge factor in their decision to fly here. ‘We’re so excited to be here,’ said Philippa. ‘We couldn’t wait to come.’

Another British couple, Simon and Sue Shaw from Banstead in Surrey, were delighted to be in Mauritius, having, like many, not had a holiday for over a year. ‘It’s a yes, yes, yes, yes, yes from me!’ shouted an excited Sue over the noise of the drummers. ‘We are just so happy to be here,’ added Simon. ‘It was very easy to get here and everyone seems delighted to see us.’

Airlines including Emirates, British Airways and Air Mauritius have been adding extra flights to their schedules to keep up with demand, but even so, Jean-Michel Pitot, head of the Mauritius hoteliers and restauranters associations and Attitude Hotels group, is advising people to book early.

‘The challenge is all about flight capacity now,’ he says. ‘We’re already seeing hotels looking at 70 per cent occupancy for December so we’re telling people not to wait until later to book – you’d better do it now.’ 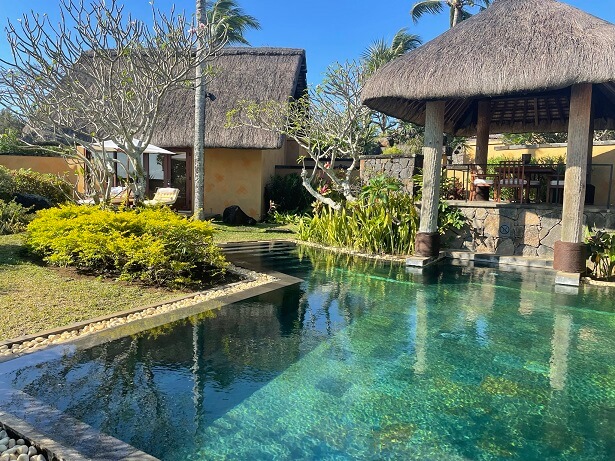 My private villa at Oberoi

Planes can only carry so many people though and while thousands of tourists arrived in the first few weeks, this is a drop in the (Indian) ocean for hotels who are seeing occupancy rates climbs steadily but slowly (apart from some exceptions, such as the picturesque boutique hotel Paradise Cove on the north-west coast of Mauritius, which is currently seeing occupancy rates of more than 80 per cent).

Most of them are still only 20-40 per cent full, however, meaning that many are waiting until more guests arrive before putting on a full programme of activities.

Some, such as Anantara Iko, one of Mauritius’s newest hotels, and C Mauritius, have ambitious plans for Ibiza-style beach parties for when occupancy improves, while others, such as Sugar Beach resort on the west coast, already have live music and dancing, a vast contrast to much of the last 18 months. 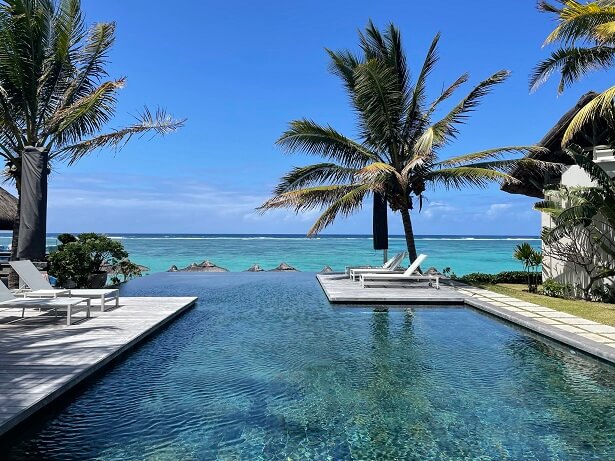 The swimming pool overlooking the ocean at C Constance hotel

It will take a while, however. Talking to stall holders and shop staff in the almost-deserted waterfront area of the capital, Port Louis, there were very few reports of an increase in tourist trade so far, but there was optimism for the future months, especially around Christmas time.

With mask-wearing mandatory, the government is hoping to avoid a Covid-19 spike now that the borders have reopened, as going back into lockdown would almost be unthinkable now that tourists are returning.

‘I don’t see the purpose of having another lockdown as we need to learn how to live with it,’ says Vincent Comarmond, general manager of the Preskill Island resort, who admits to pacing around his hotel on October 1 while he waited for the first international arrivals in months to check in. ‘We’ve all worked so hard to get to this point and can’t wait for more people to discover just how unique a place Mauritius is.’

Click here for the latest information on travel to Mauritius

Travelling around Mauritius? Check out the best rates for car hire in Mauritius

Check out my other great articles on holidaying in Mauritius: The best luxury hotels in Mauritius to add to your wish list; Rum, yoga and dolphins: my action-packed holiday in Mauritius

A version of this article first appeared in Globetrender.com