The brochure for The Montagu Arms in the New Forest encourages guests to ‘take your cue from the ponies: graze, wander and enjoy the quiet.’ I did all three during my stay at this 200-year old hotel and emerged feeling as relaxed and content as the beautiful ponies which roamed freely around the surrounding roads and meadows.

The picturesque village of Beaulieu (fittingly, the name means ‘beautiful place’) is tiny, and seems to have more ponies than people living there. A handful of Georgian cottages line the few streets but it is certainly far less built-up than its New Forest neighbours such as Brockenhurst and Lymington. 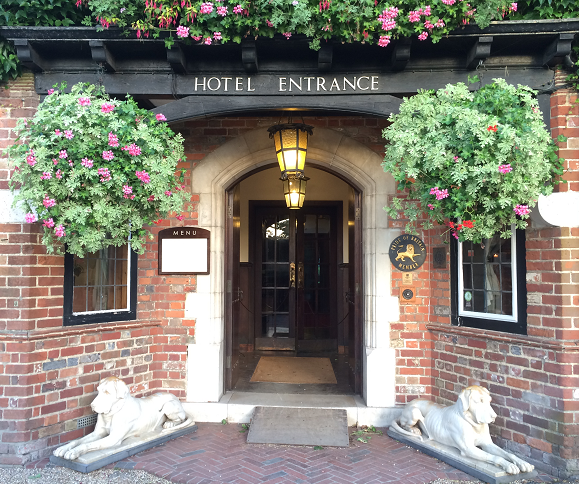 The welcoming entrance of The Montagu Arms

This means that The Montagu Arms, located right at the heart of the village, is quite a striking landmark, rivalled only by the 13th century Beaulieu Abbey Church which lies across the river. 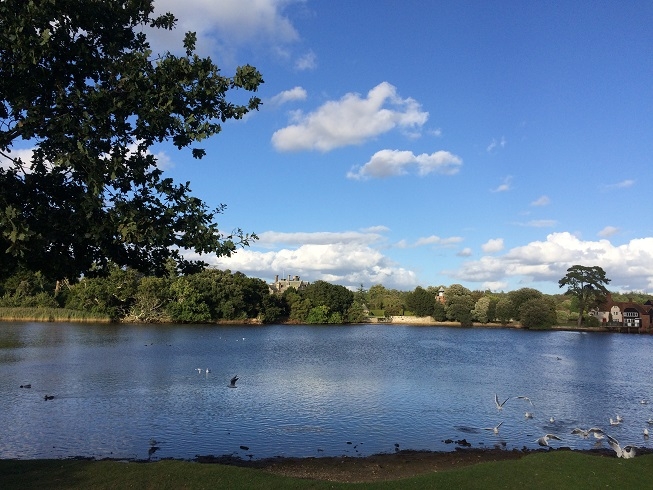 Arriving at The Montagu Arms

The hotel’s charming and traditional exterior is replicated inside: this is no modern boutique venue but old-fashioned in the nicest sense of the word- the reception is oak-lined, the lounge with its view of the pretty garden was full of people enjoying afternoon tea and the overall atmosphere is of quiet refinement. 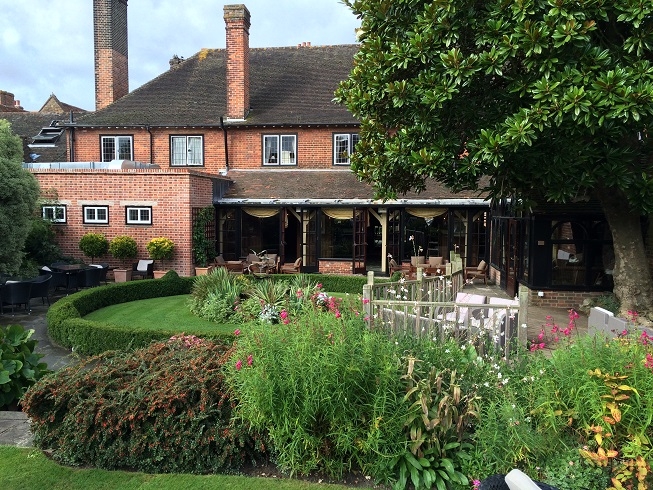 Bedrooms at The Montagu Arms

Our room, the Walnut Suite, was right at the front of hotel but double-glazing meant traffic noise (or the whinnying of horses) wasn’t a problem. While the rather small bathroom could have done with a refresh, the rooms (a double bedroom and a lounge which could double up as a second bedroom) were light and pleasant. There were nice touches such as free bottled water and little notes saying what the weather would be like the next day and when breakfast was being served which made you feel very looked after. 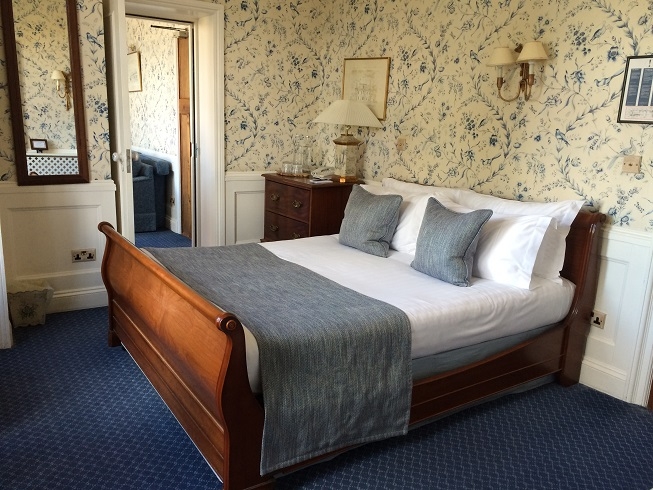 Our room, the Walnut Suite, was at the very front of the hotel, while other rooms overlook the gardens at the back 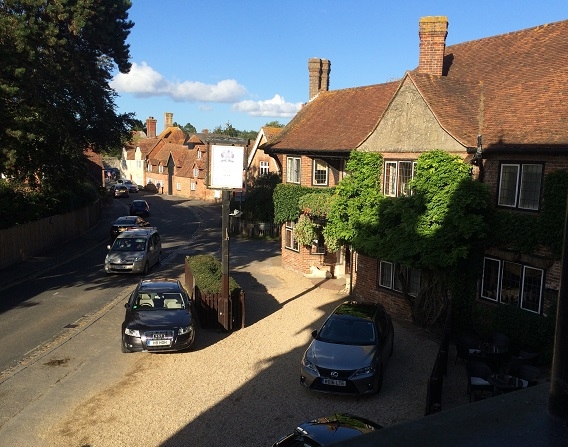 The view from our bedroom window showing the front of the hotel and the main street – unaccountably all the ponies had disappeared out of shot!

While there isn’t a spa at The Montagu Arms itself, guests are able to use the excellent facilities at sister hotel Careys Manor, a 15 minute drive through the countryside to Brockenhurst. The highly-regarded SenSpa has several pools, saunas, steam room and everything you could need for a relaxing afternoon.

Exploring Beaulieu in the New Forest

As it was late afternoon by the time we checked in, we decided to explore the surrounding area instead. New Forest ponies aside, Beaulieu is most famous for the National Motor Museum – home of 250 classic cars – which has commandeered much of the land across the lake facing The Montagu Arms. However you can still enjoy a long, invigorating walk all around Beaulieu’s green spaces before returning to the hotel feeling that you have thoroughly deserved your evening meal. We also had a lovely impromptu tour of the Abbey Church by the groundsman who we bumped into on his evening rounds. 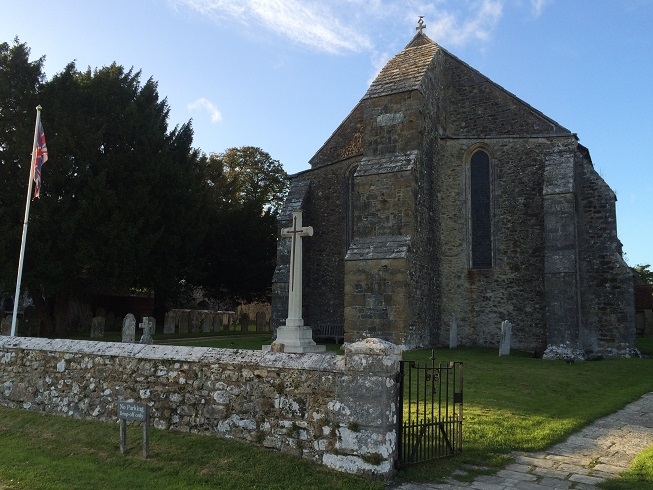 Dinner at The Montagu Arms

After sampling some excellent pre-dinner cocktails in the lounge – they took their time but were worth the wait – we moved through to the Terrace Restaurant which was sporting a brand new carpet festooned with dozens of New Forest animals.

Three courses were £75, or included in the dinner, bed and breakfast package, and the menu was simple but interesting, with seasonal and locally-sourced ingredients. We started with Autumn truffle risotto, with salt-baked celeriac, Baron Bigod cheese and lightly-pickled mushrooms and spiced Scottish scallops with cauliflower puree and cumin veloute – both were excellent. 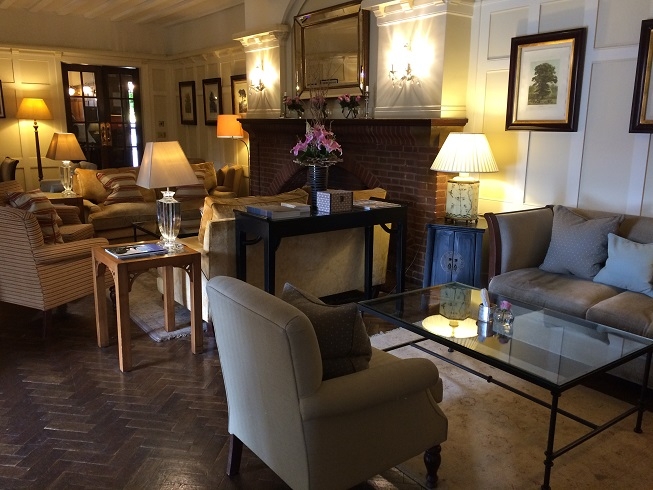 To follow we both had roast saddle of Cornish coastal lamb which was perfectly done – other options included roast chicken breast, monkfish, saffron pasta and Shetland hake – and finished off with a pair of extremely delicious desserts – dark chocolate cremeaux with walnut ice cream, coffee macaroon and milk chocolate mousse and warm salted caramel fondant with a cider lolly sorbet’ and crème fraiche.

The food was excellent and seemed worthy of the Michelin-star which it held when we were there, but which it has since lost. I can only assume that the food is done in a more relaxed style than Michelin-dining often is – there were decent-sized portions, promptly served and not much in the way of tiny reductions and little globules of things. If they want to try and reclaim their star I’m sure they’ll be able to, but it might be that they’re going in a less formal direction. Either way, we thoroughly enjoyed it. Our post-dinner plate of petit fours

As if we hadn’t eaten enough we were served coffee in the lounge with a very generous tray of petit fours and then slept solidly for 10 hours. 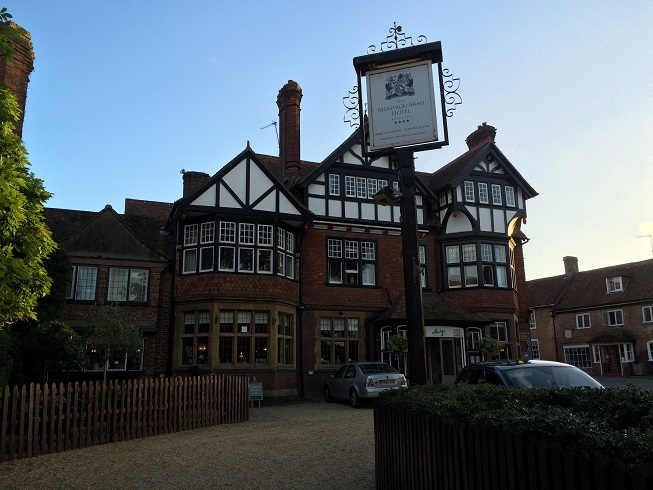 Next door to the main hotel building is Monty’s restaurant, a more informal brasserie where breakfast was served during our stay

Breakast at The Montagu Arms

As the Terrace restaurant was being refurbished the next morning, breakfast was in the very pleasant Monty’s brasserie next door, where there was an ample buffet and very prompt delivery of the cooked breakfasts, which included fresh eggs from the hotel’s 28 chickens.

There was time for another stroll through the village before heading off. As a base on which to explore the New Forest the Montagu Arms is an excellent choice, but it’s also an ideal spot to just laze away a Sunday afternoon.

Hotel information and to book The Montagu Arms

The Montagu Arms is a member of Pride of Britain Hotels – a collection of 50 privately-owned independent British hotels.  An overnight stay (two sharing) costs from £219 per room bed & breakfast and £289 per room dinner, bed & breakfast including complimentary access to SenSpa facilities (excludes Hydro) in nearby Brockenhurst.

Read more reviews of The Montagu Arms on Tripadvisor

If you like reading reviews of lovely hotels in the New Forest then you’ll love these: A deeply relaxing day at the Lime Wood hotel and spa, the New Forest; Chewton Glen, the New Forest: luxury from spa to treehouse; Stanwell House, Lymington: a New Forest welcome; Boutique luxury at Daisybank Cottage near Brockenhurst