The man who described Bibury as ‘the most beautiful village in England’ surely never went to Lower Slaughter. It might have a slightly alarming name but Lower Slaughter, all lush green fields, yellow Cotswold stone houses and a babbling brook running through it all, was the very essence of a charming village.

I’ve often driven past the road signposted to The Slaughters on my way through the Cotswolds but had never taken the turning. It was only when I was on my way to the Lords of the Manor hotel in Upper Slaughter that I realised what I’d been missing out on. 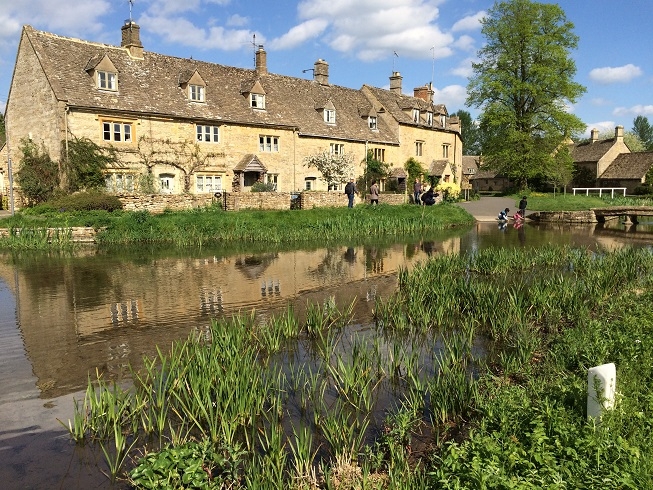 The presence of a wedding party – the photographer making the most of the stunning scenery to photograph the happy couple – and children running happily back and forth across the little bridge over the river, combined to make a scene which would have been dismissed as too unreal if it had appeared in a Hollywood film. It was only by a sheer effort of will that I got back in my car and headed on up the hill to my destination [note: my review was from a stay a few years ago and while it has been updated frequently since, some details might have changed since my visit]. 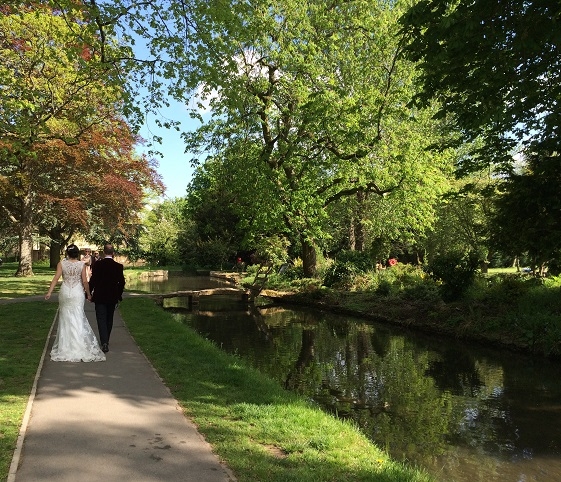 Newly-weds walk through the village of Lower Slaughter

Arriving at Lords of the Manor

Lords of the Manor, perched just behind the grand private home Upper Slaughter Manor (which is the first thing you see on your way up the hill) dates back to 1649 and looks as beautiful and traditional as you’d expect from a 17th century Cotswold manor house. Set in eight acres, which means impressive gardens both front and back of the hotel, the hotel is a calm retreat which seems as if it hasn’t changed much over the centuries. 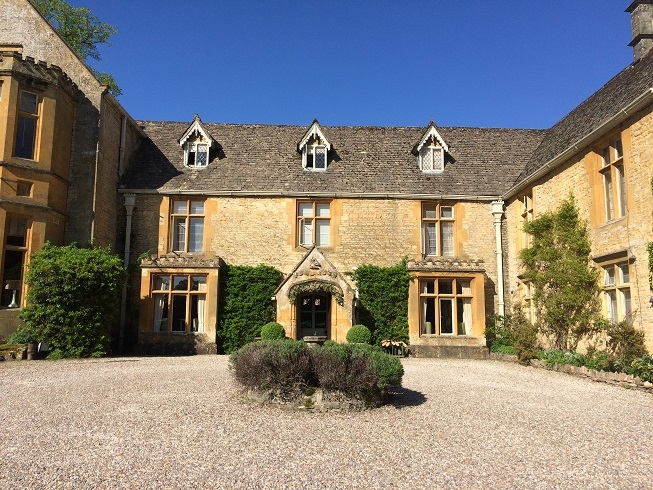 Bedrooms at Lords of the Manor

However there are still all the mod cons you’d expect from a four-star hotel awarded Best Country House Hotel by the Good Hotel Guide: our smart suite on the first floor (bedroom, small bathroom and separate lounge) had TVs, free wi-fi, coffee facilities and nice touches such as free sparkling elderflower water as well as bottles of mineral water. 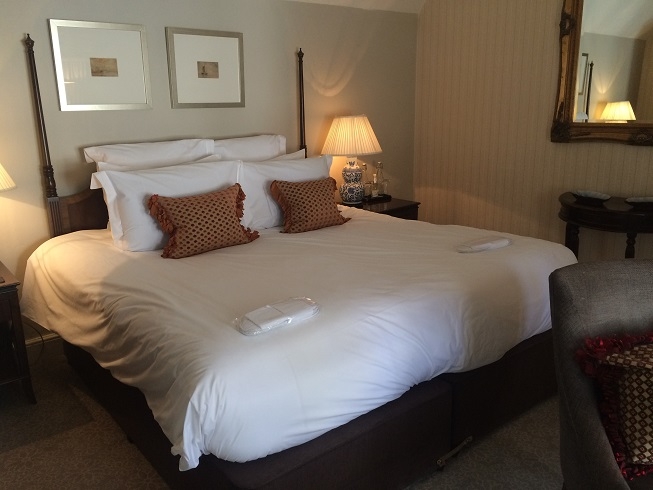 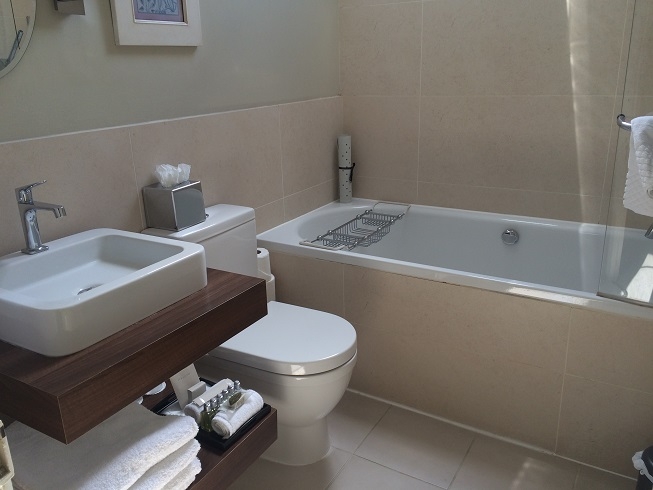 The small but smart bathroom

Beautiful gardens at Lords of the Manor

The view onto the gardens at the back of the hotel were too good to resist and so we decamped outside for a drink and a pleasant chat with the general manager, Michael Obray. The lovely remote location means that the only noise which can be heard from the garden was birdsong, and the early summer sunshine meant it was a beautiful spot in which just to sit and relax. 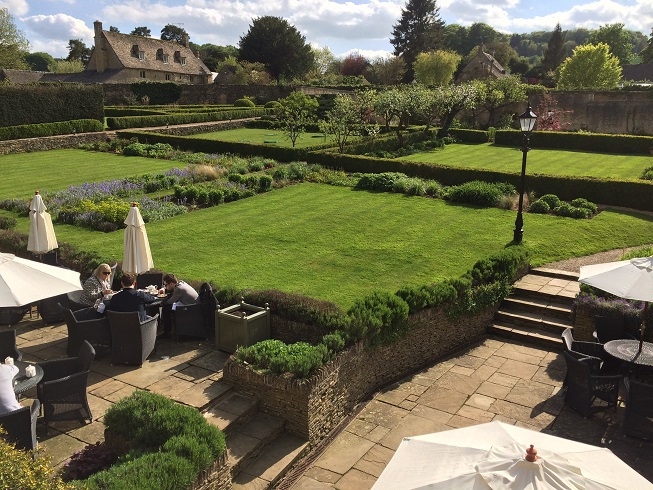 The view of the gardens from our suite 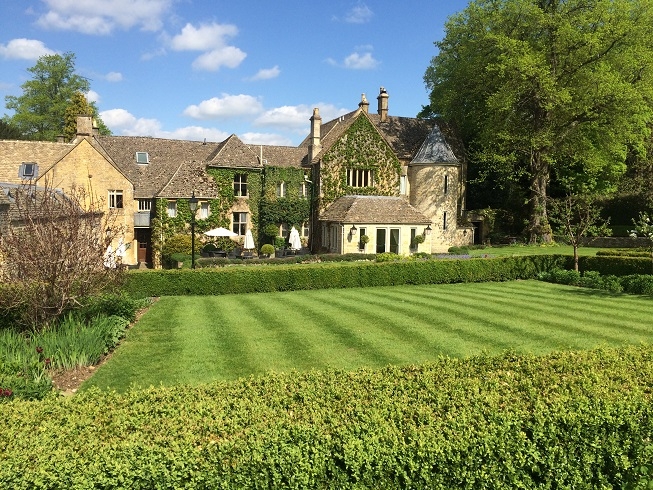 The terrace at the back of The Lords of the Manor

As the sun set it was time to change for dinner at the hotel restaurant [Note: Lords of the Manor held a Michelin star for eight years but lost it in 2018. Chef Charles Smith might be on a mission to regain it…] We made the error of going straight to the dining room and were firmly but politely ushered back to the bar for a pre-dinner drink where the other guests had gathered. However it did give us the chance to look through the menu and enjoy a tray of canapes and a glass of fizz. 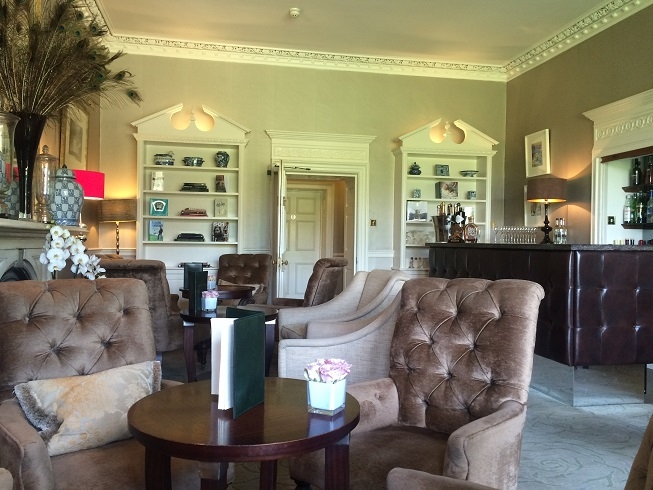 The lounge where guests were served pre-dinner drinks 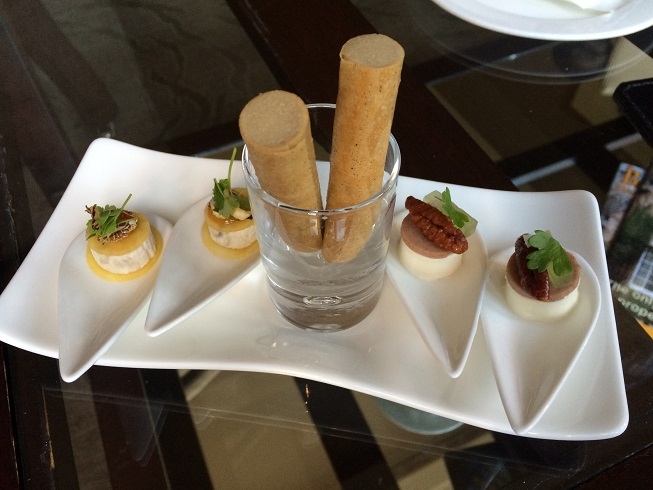 Pre-dinner canapes in the lounge 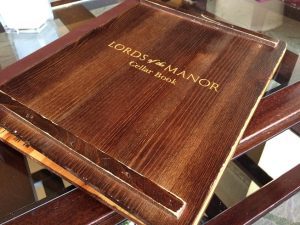 This means the Lords of the Manor feels like a rather formal and old-fashioned hotel, which is perfect if you like that sort of thing, but it might not be ideal if you’re aiming for something more lively and contemporary.

Dinner at Lords of the Manor

The rather dark dining room when we finally entered, only reinforced that view, with a fussy, old-fashioned carpet and rather uninspiring flower arrangements [pics on the hotel’s website show that the restaurant has had a makeover since my visit]. 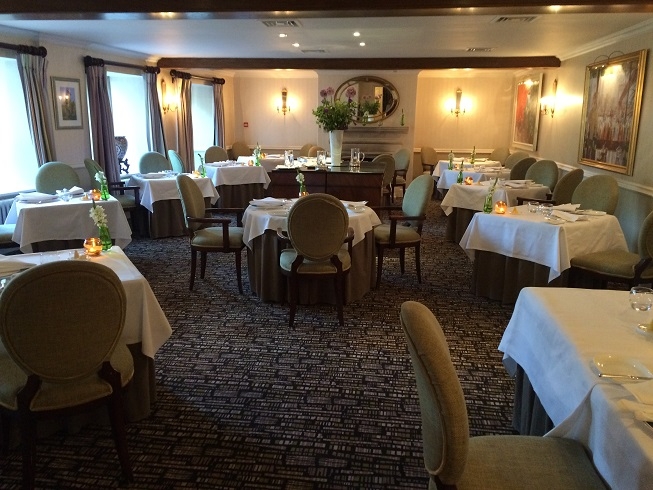 Lords of the Manor held a Michelin star for eight years and the food was certainly of high quality. However a memorable meal must have something over and above just well-presented food, something fun and showing verve and panache that makes you go ‘Wow!’ and the dishes on the tasting menu, while very intricately made, somehow lacked that. They also lacked bite – there was little texture to many of the courses – and some of which seemed, well, a bit too beige. 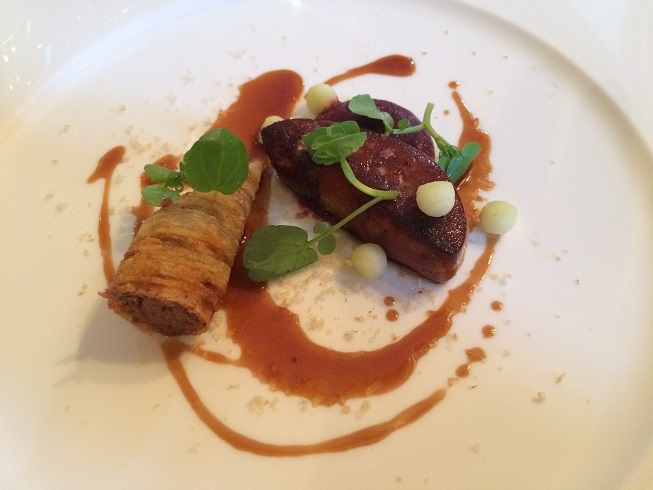 The first of two meat courses, a croustillant of venison with foie gras 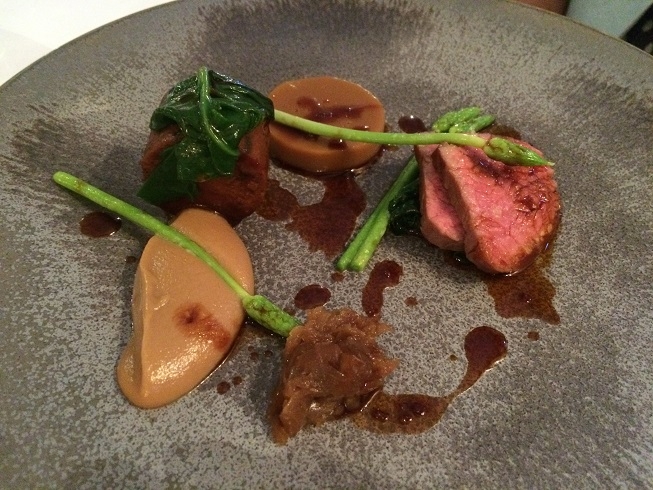 We started with an appetiser of leek and potato cream and kipper foam, followed by citrus cured salmon and avocado, croustillant of venison with foie gras and then dry-aged sirloin of beef. More foam arrived, this time rhubarb and ginger, and then we ended the meal with panna cotta and chocolate tart. 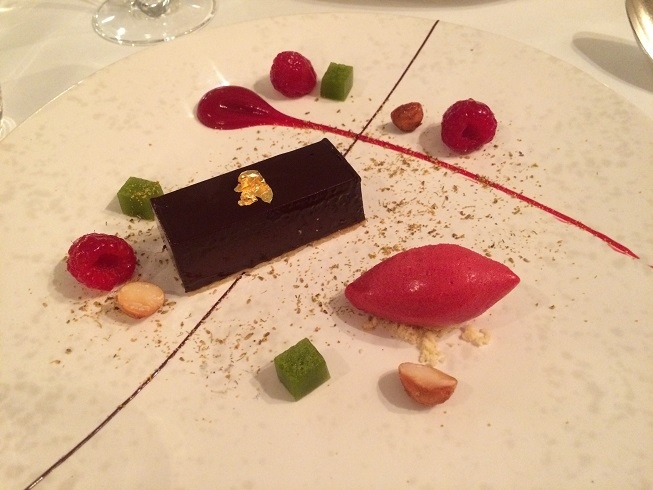 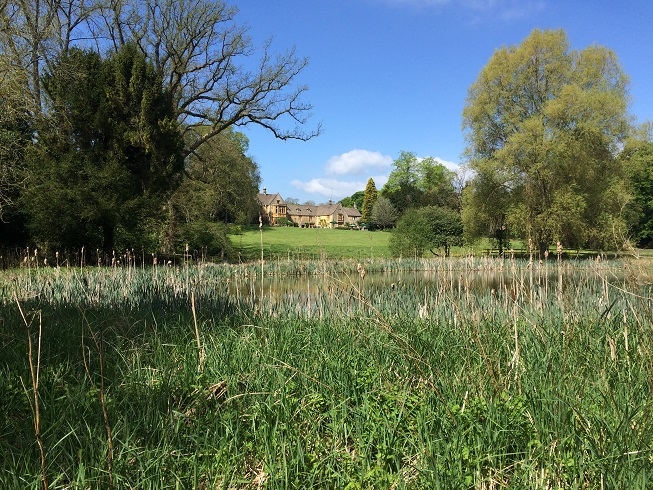 Exploring round Lords of the Manor

The next morning after breakfast, the hotel really came into its own. Its great location meant that not only did we have a really lengthy walk around the grounds at the front of the house, where we discovered a beautiful Italian-style rock garden hidden from the hotel, but the village of Upper Slaughter is as stunning and Cotswold-y as its Lower counterpart. 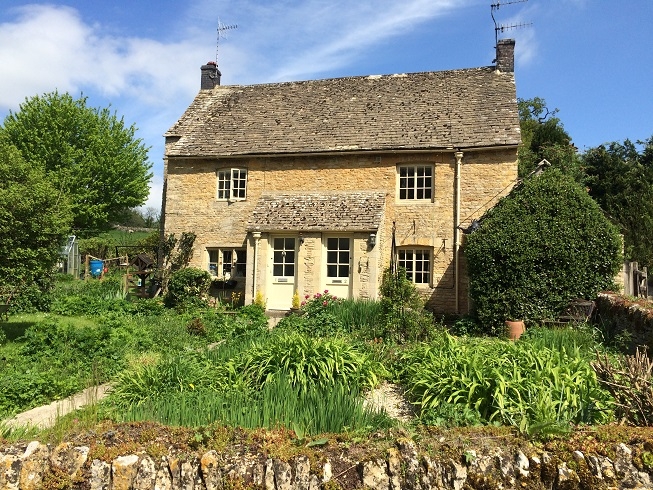 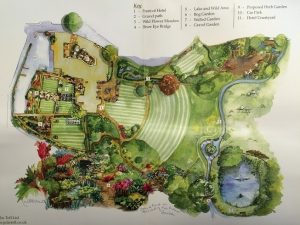 A beautiful map of the grounds at Lords of the Manor

Full marks too for having a beautiful hand-painted map of of the grounds (see pic).

I left Lords of the Manor feeling that it had been a really pleasant stay but that a refresh of the dining room and a little more life and energy throughout the hotel would go a long way. But its beautiful location in the heart of the Cotswolds is certainly hard to beat.

Hotel information and to book Lords of the Manor

Rooms from £240 per night including breakfast. Lords of the Manor is part of Small Luxury Hotels, is featured in the Good Hotels Guide and has three AA rosettes.

Check availability and book Lords of the Manor here