With rooftop beehives, a ‘Vegan Suite’ and classic films playing in the lobby depending on the season, Hilton London Bankside is not your typical chain hotel offering. It’s also the closest hotel to Tate Modern, which makes it the ideal location to stay if you are visiting the art gallery which is just a few minutes’ walk away, but it’s extremely handy for other London landmarks such as the River Thames, the South Bank, Shakespeare’s Globe, St Paul’s, Covent Garden, the Millennium Bridge and Blackfriars and Waterloo railway stations.

When you have finished sight-seeing, shopping or visiting the exhibitions at Tate Modern, Hilton London Bankside is an affordable, spacious and above all, friendly hotel to retreat to. Not only does it have its own bar and restaurant onsite, it also has an indoor swimming pool – a rarity in London hotels – as well as a gym, an executive lounge and 292 bedrooms including 25 suites and a penthouse apartment with a private terrace. 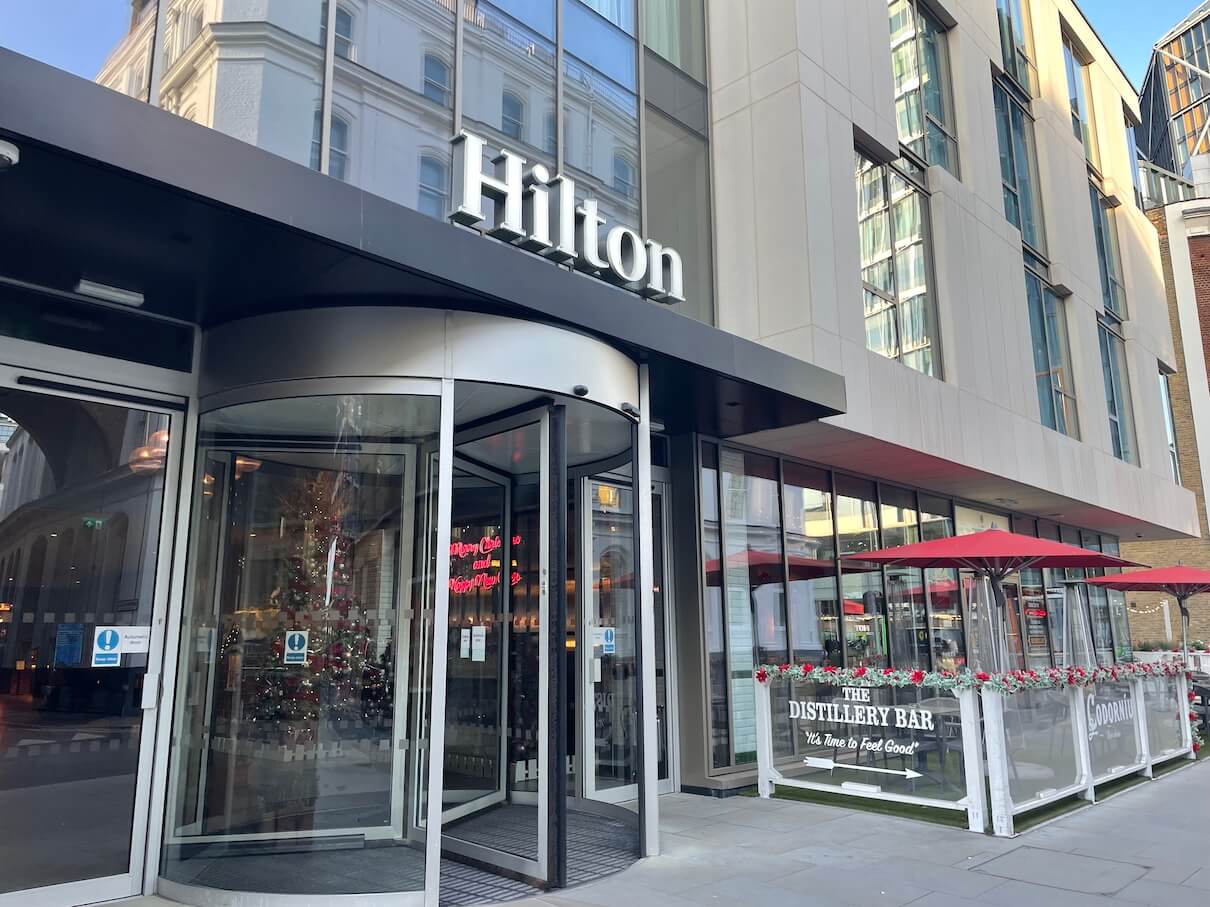 The entrance to Hilton London Bankside is on Great Suffolk Street, making it the closest hotel to Tate Modern

The hotel is relatively new to the London scene, opening in 2015, and has 10,000 sq ft of event space including a below-ground ballroom for large events. Its restaurant, OXBO Bankside, is a 168-cover restaurant serving breakfast, brunch, lunch and dinner, while the bar, named The Distillery Bankside, has more than 100 gins and an outside terrace which is popular in the summer months. 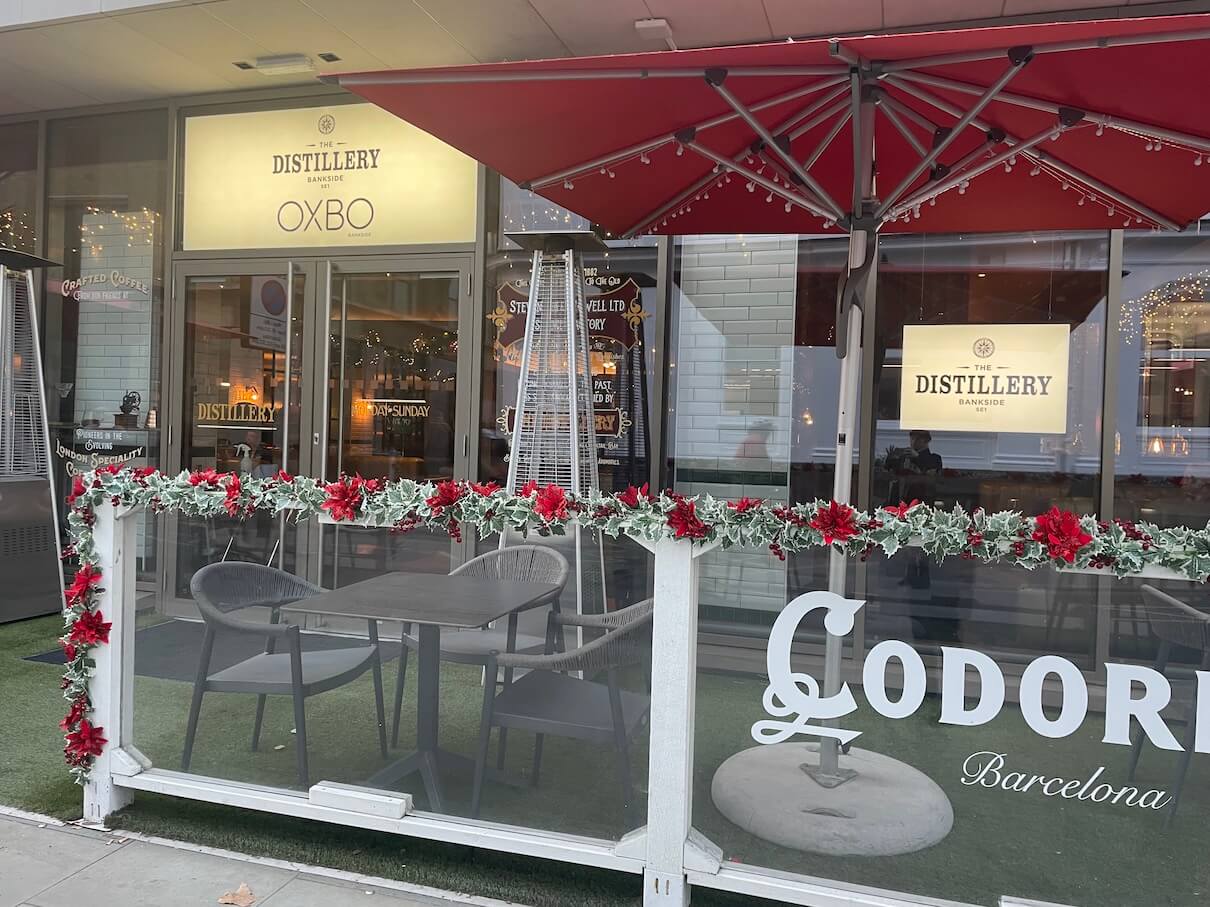 The outside terrace at The Distillery Bankside 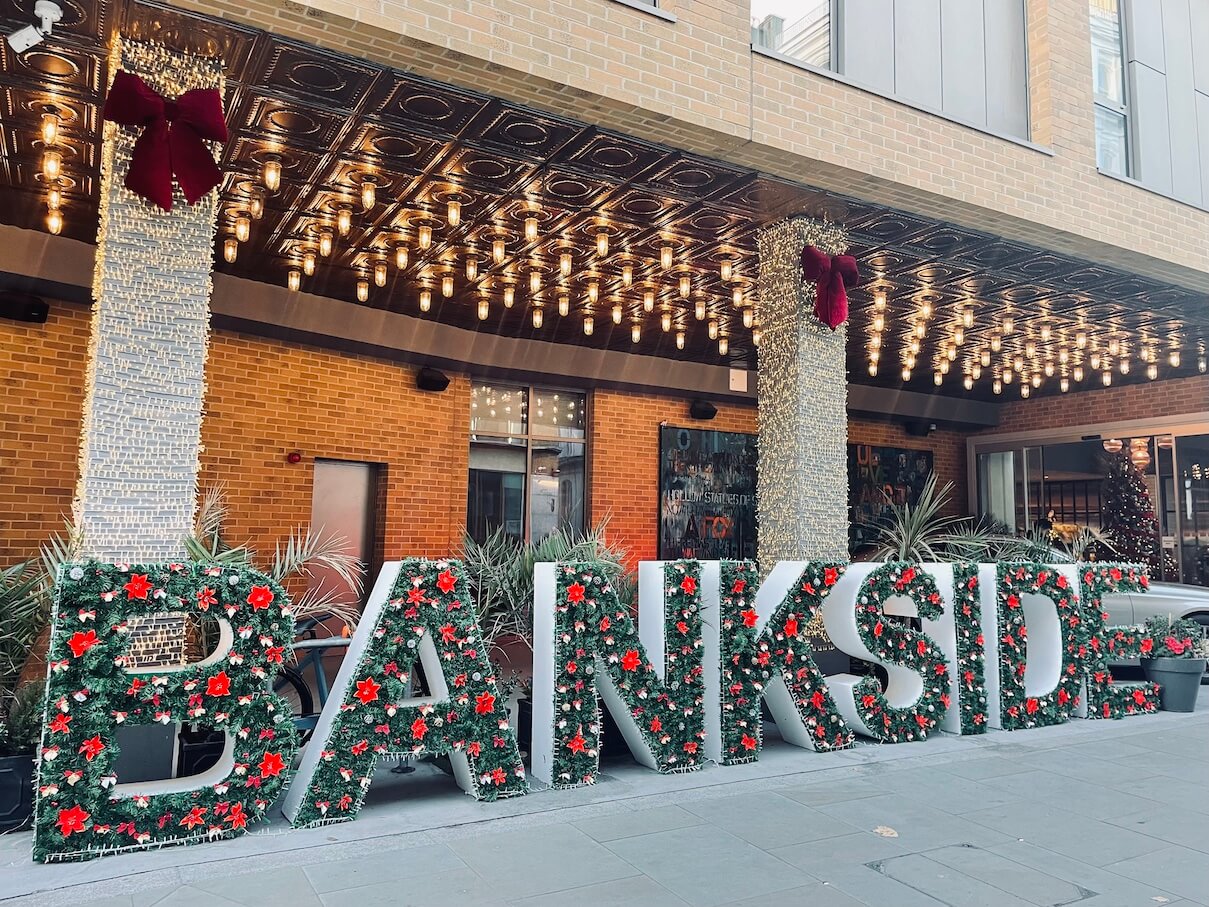 The hotel sign was looking particularly festive when I stayed

I arrived at the hotel slightly earlier than expected, having walked the ten minutes from London Waterloo, and was pleasantly surprised to be told I could wait in the executive lounge, access to which is granted for certain room grades. The lounge was a haven of calm where you could work, relax or tuck into the free food and drink, but no sooner had I sat down that the receptionist came to tell me that my room was now ready. 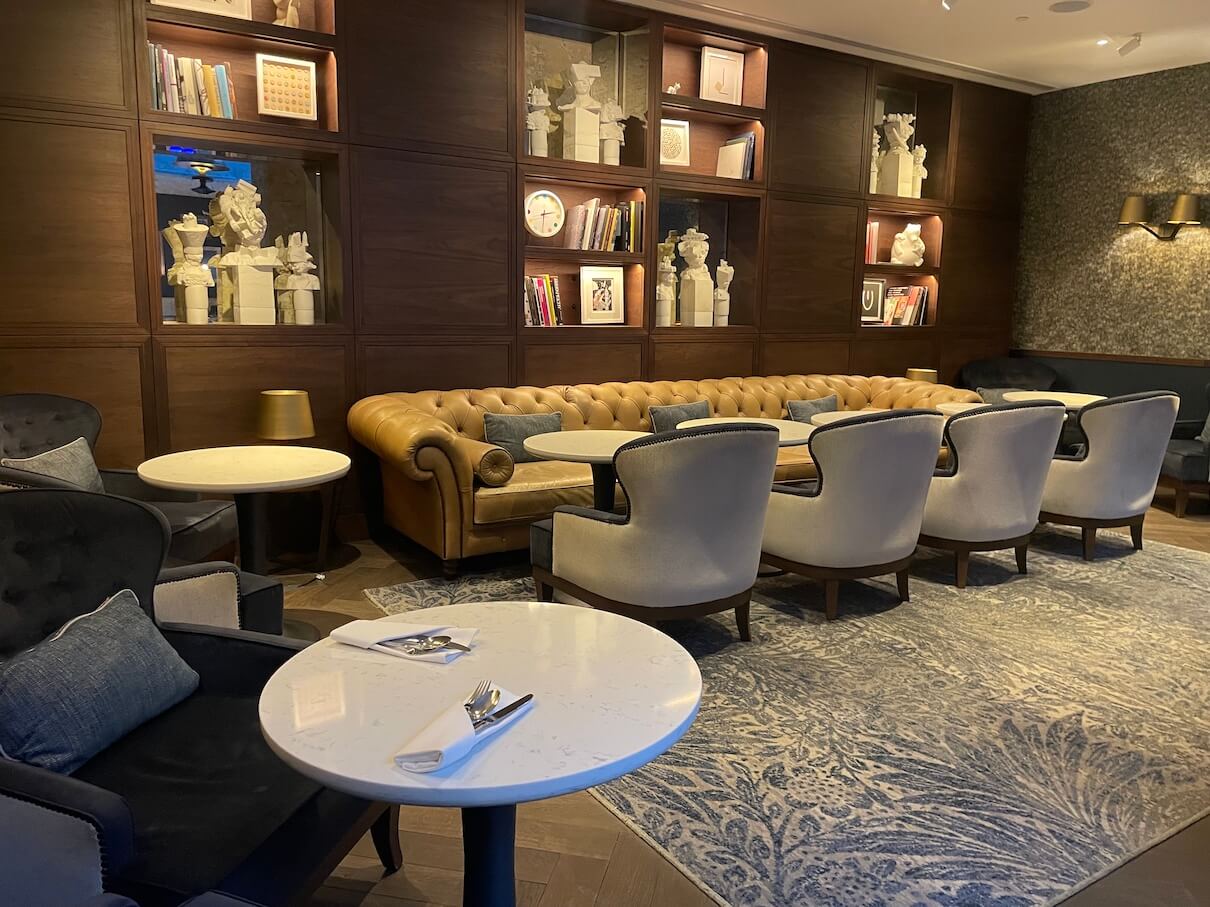 My room was pleasantly large for a London hotel room, with a separate hallway, large bathroom with a bath and in-bath shower, large beds, fitted wardrobes, corner sofa, writing desk and chair, Smart TV, free wifi throughout and ample lighting. There were other hotel essentials such as towelling robes (perfect for heading down to the swimming pool), a hairdryer, room safe, mini bar and ironing board and there were plug points everywhere, ideal for business and leisure stays alike. 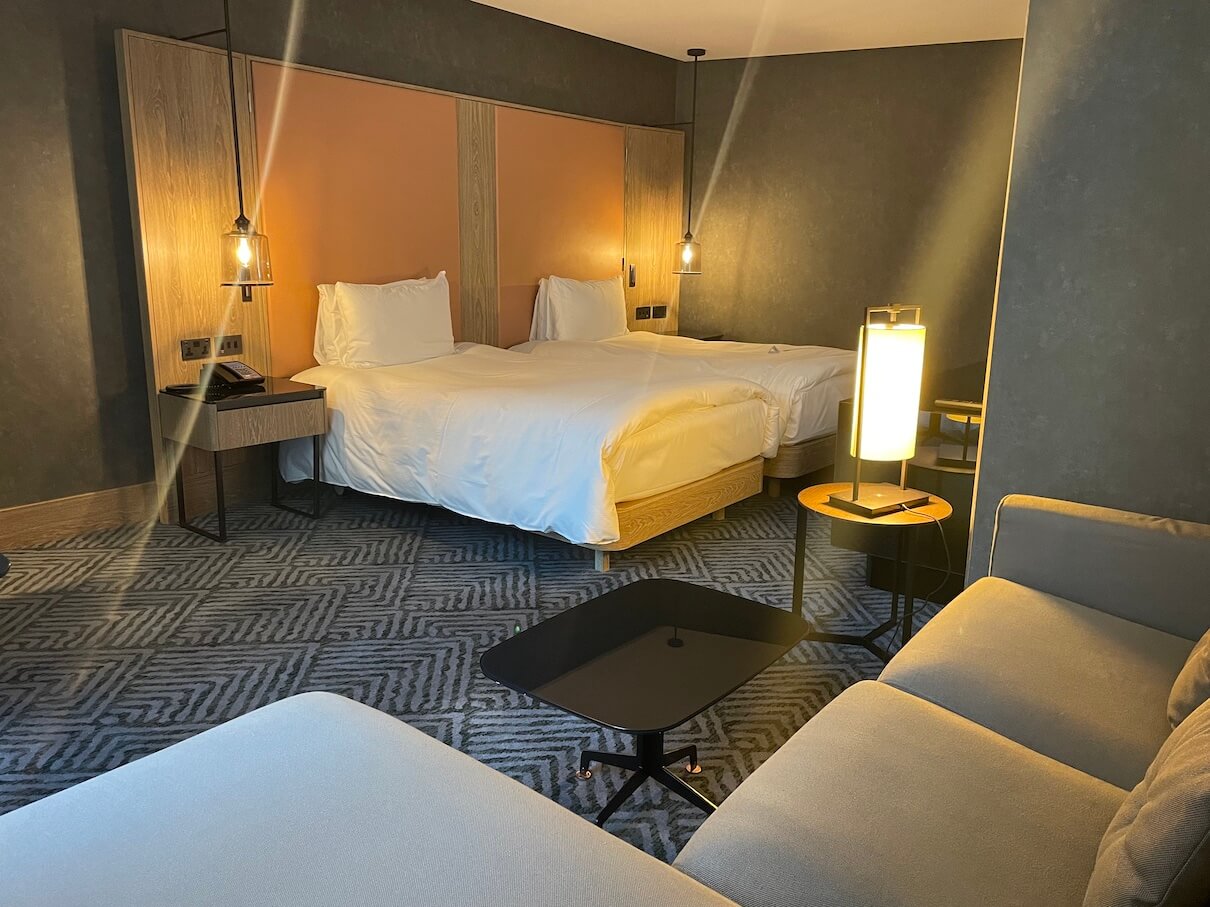 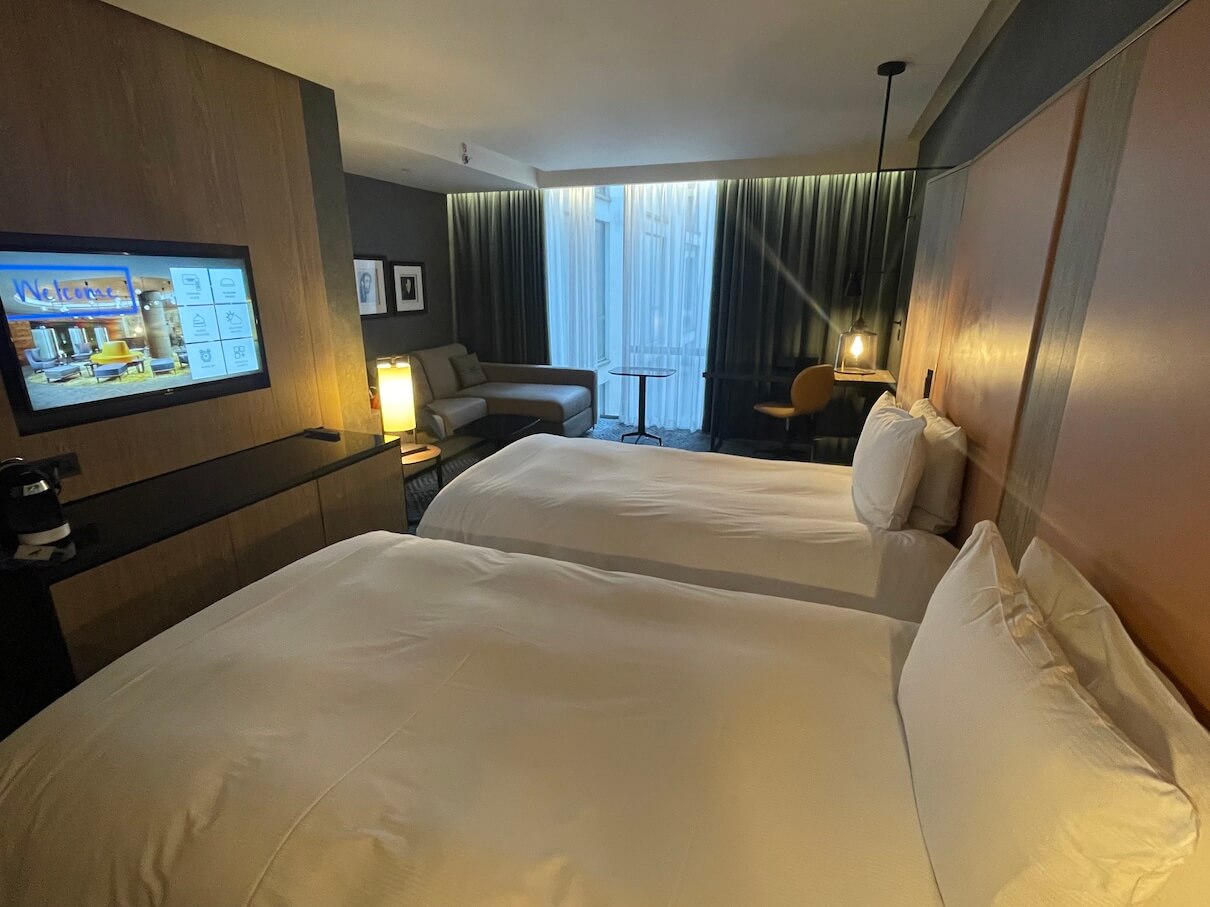 The cabinet underneath the Smart TV contained a kettle, a coffee machine, minibar and various snacks

I instantly headed off to the basement to find the Hilton’s heated swimming pool which was perfect for doing some laps before relaxing on the many poolside loungers. 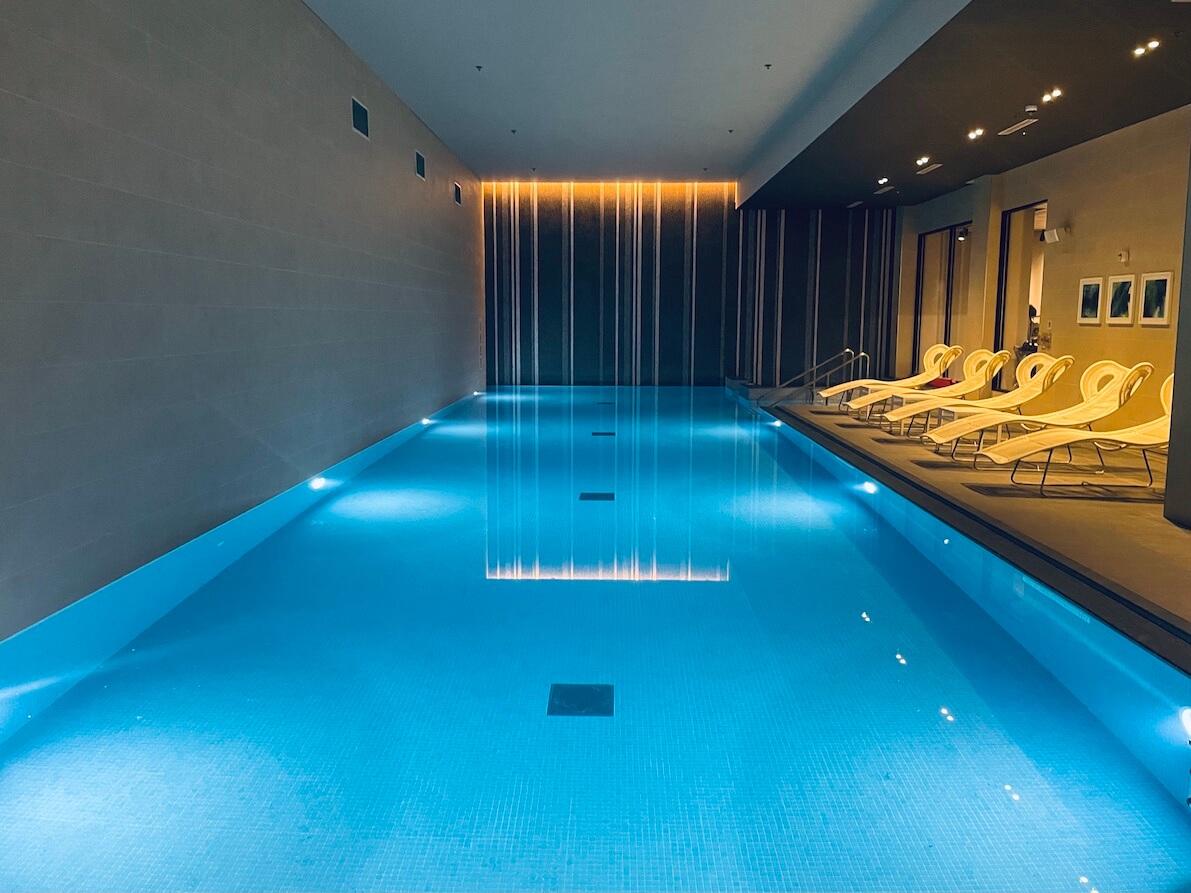 The gym looked smart, modern and well-equipped but I was content instead to leave the cardio machines and weights to others more dedicated than myself, and head out to discover Tate Modern for myself.

The beauty of Hilton London Bankside is that it’s no more than two minutes walk from the entrance of the hotel to the entrance of Tate Modern, and with free entrance you can be inside and gazing at a Rothko or Degas in no time. 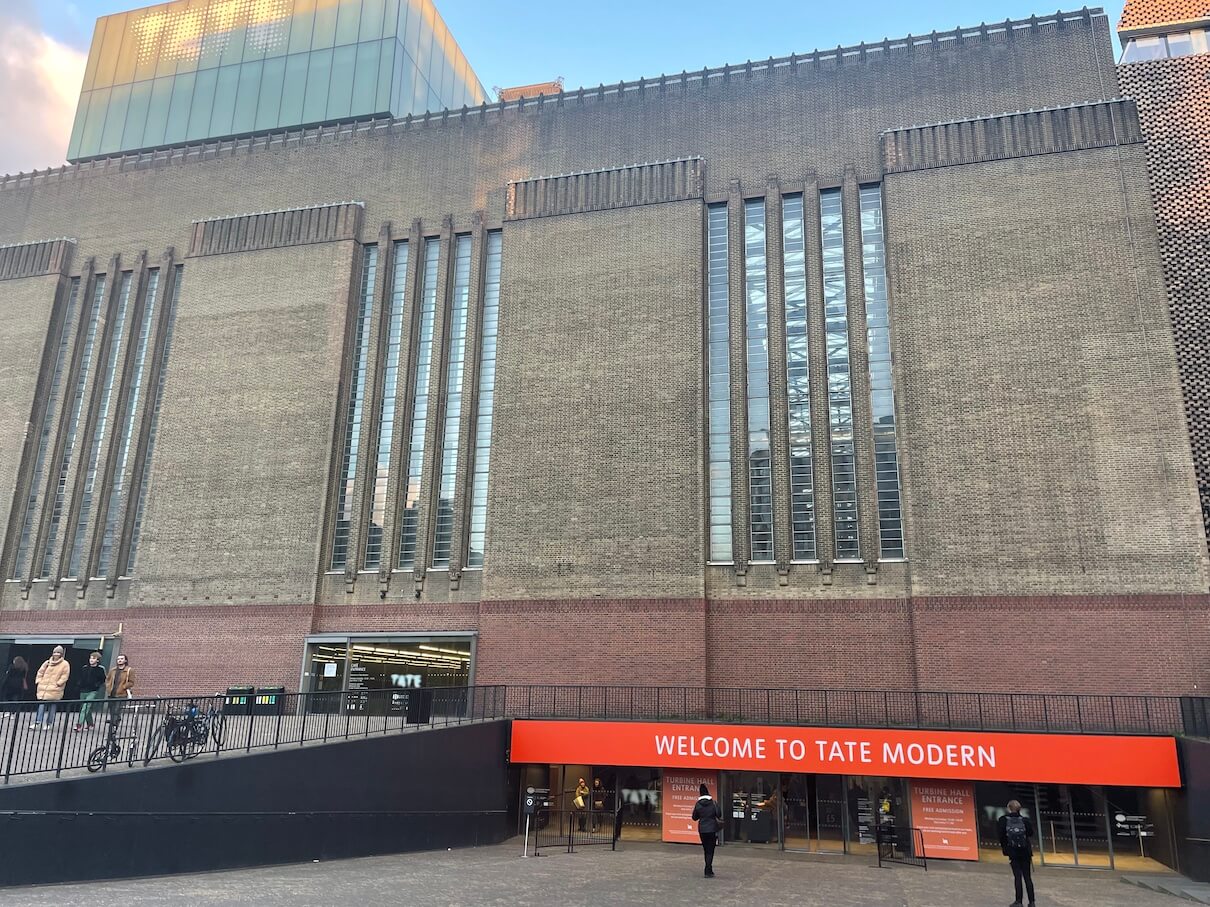 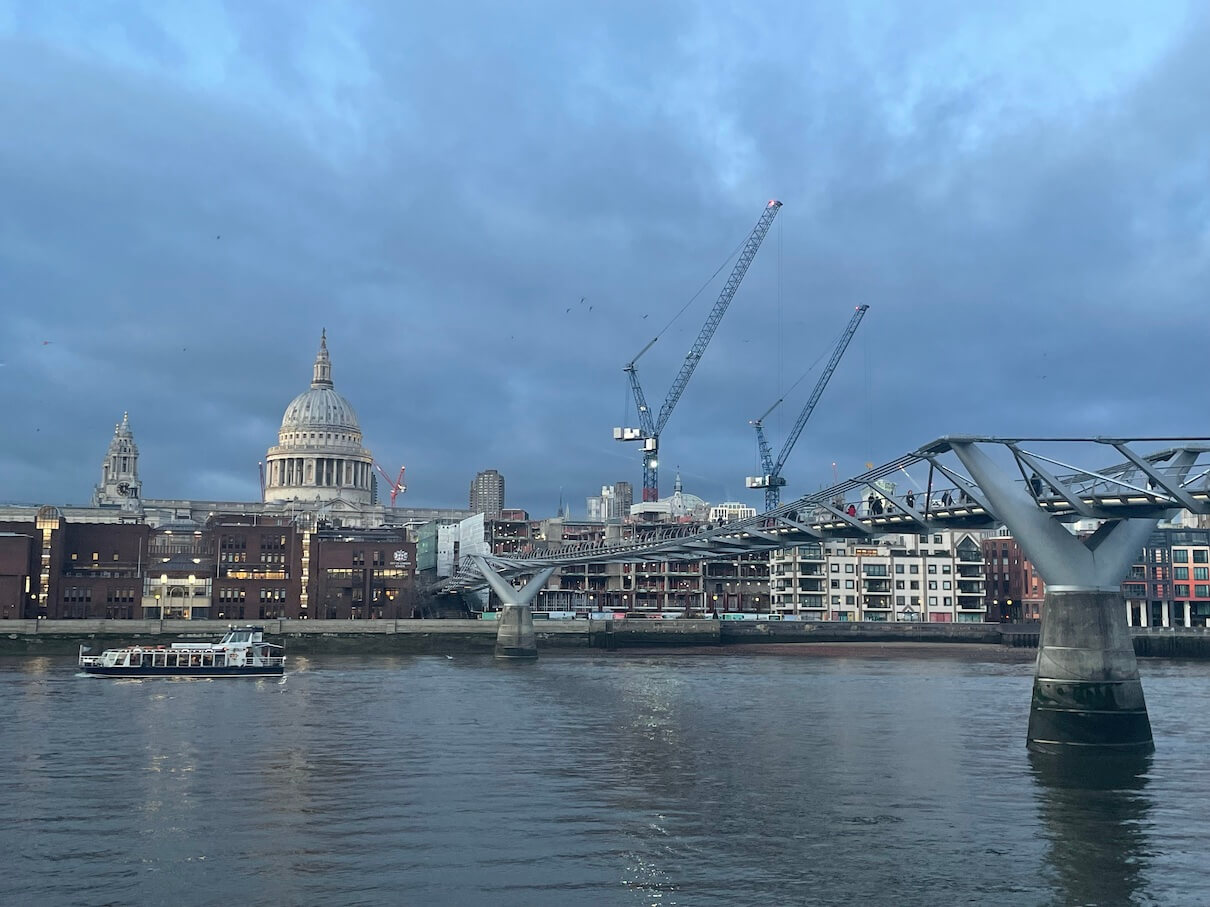 The menu at OXBO could be described as classic British with a twist, with starters ranging from leek and potato soup, duck rillettes and seabream carpaccio, and mains including sirloin steak, beef burger, chicken breast and potato gnocchi. 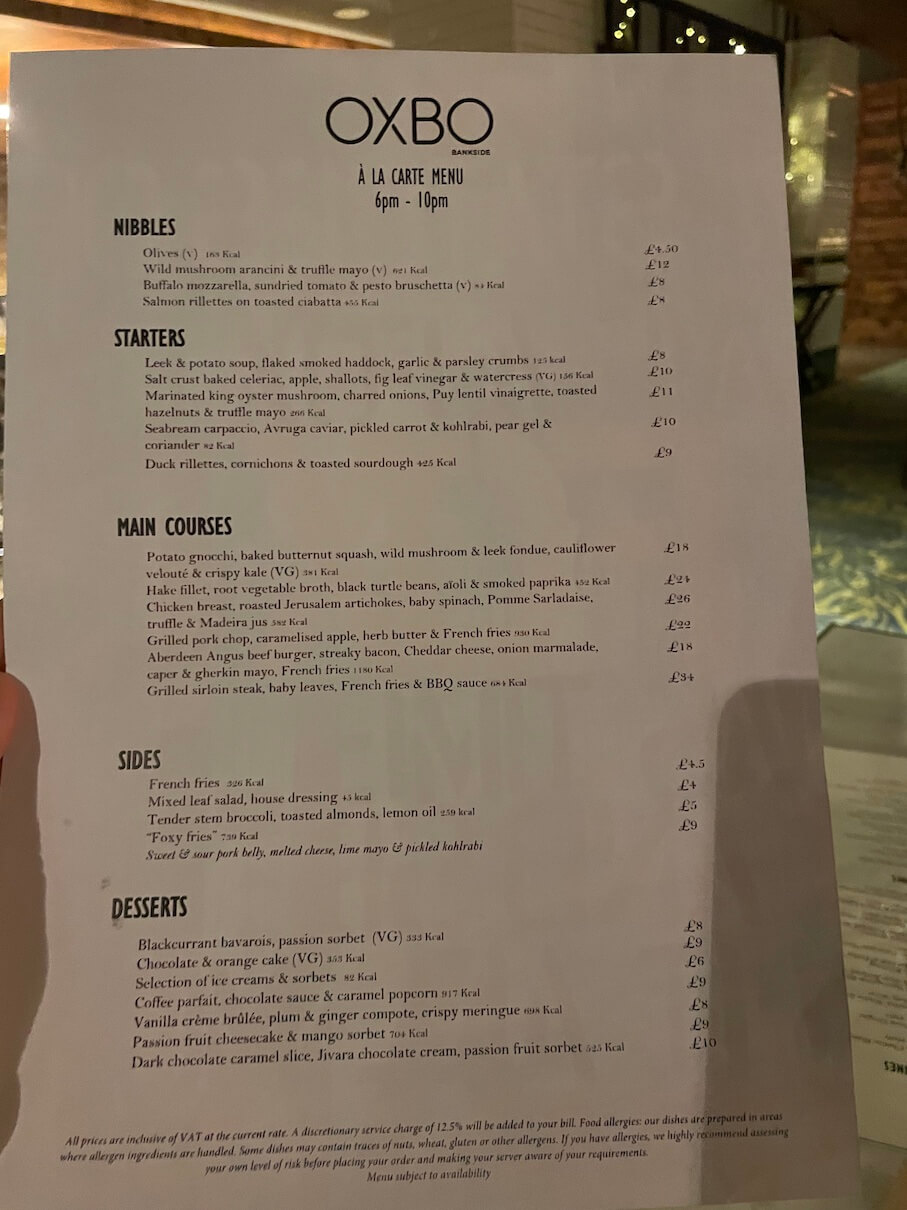 The menu at OXBO Bankside restaurant

As we were under a time pressure – we were heading off shortly to the Theatre Royal for the evening to watch a one-off performance of Handel’s Messiah – we skipped starters (I had a cocktail from the Distillery instead) and went straight for mains: I had the hake fillet, with root vegetable broth and black turtle beans, while my plus one for the night – my mum – opted for the grilled pork chop with caramelised apple and herb butter. 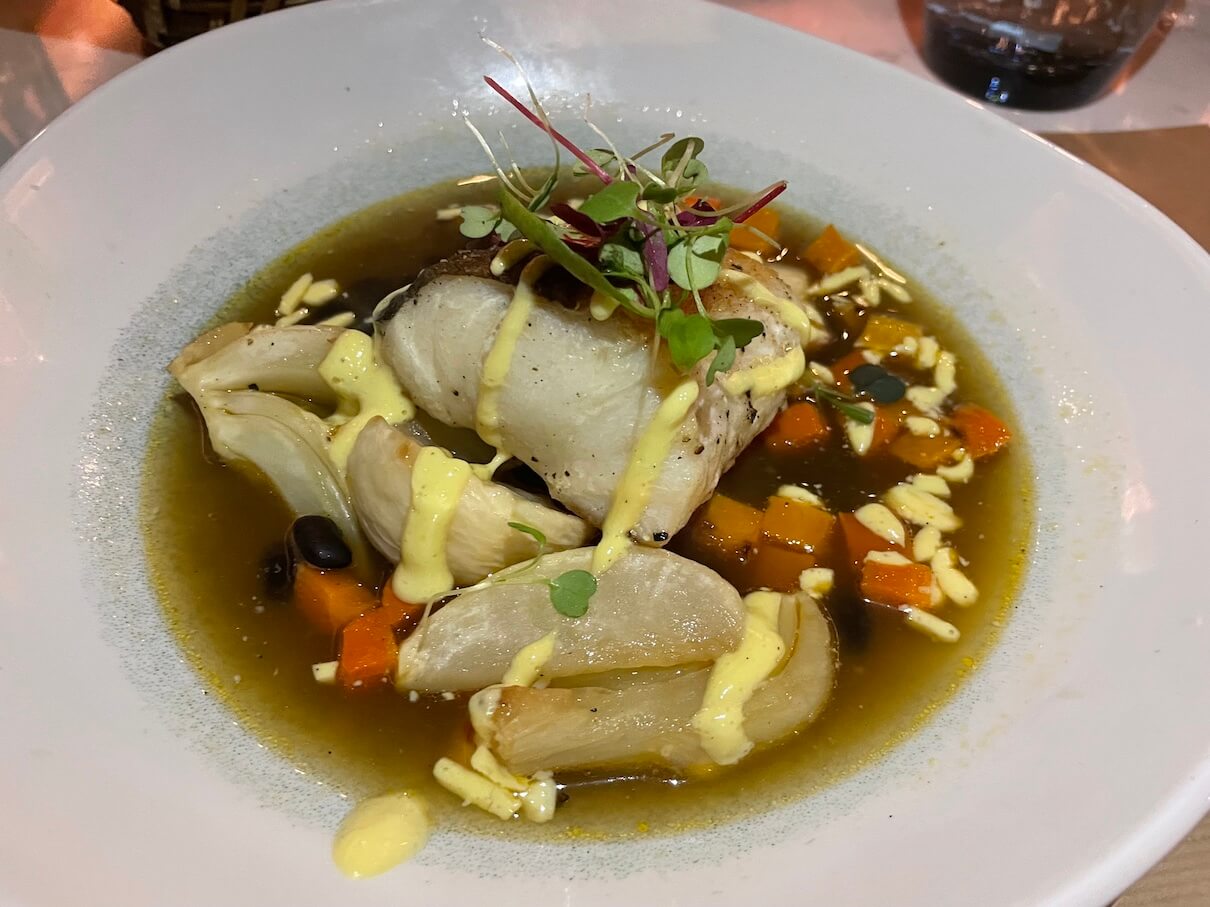 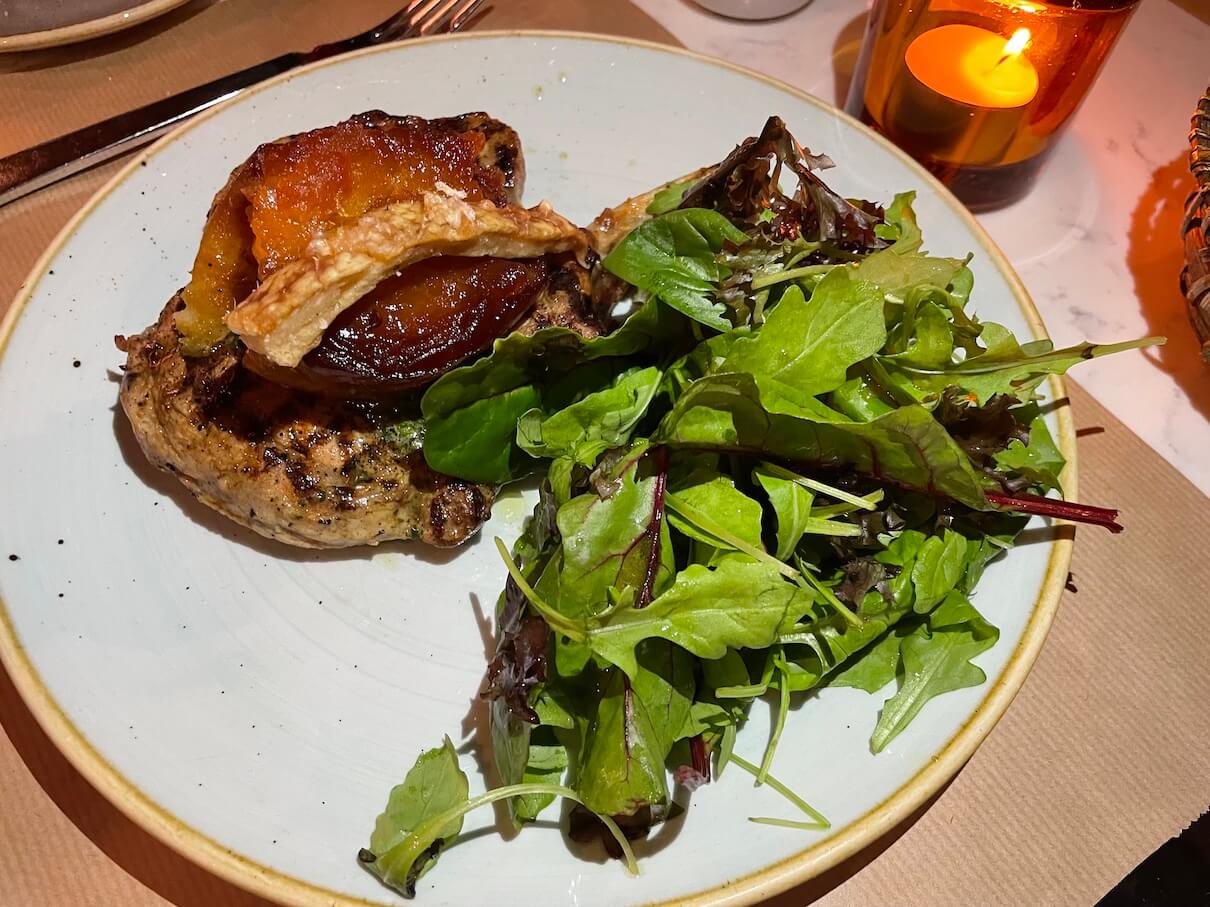 My fish was fresh and tasty and complemented by, rather than overpowered by, the clear broth, but the standout dish of the evening was the pork chops which my mum (a butcher’s daughter) declared ‘An absolutely 10 out of 10 – possibly the best I’ve ever eaten’ which was high praise indeed. 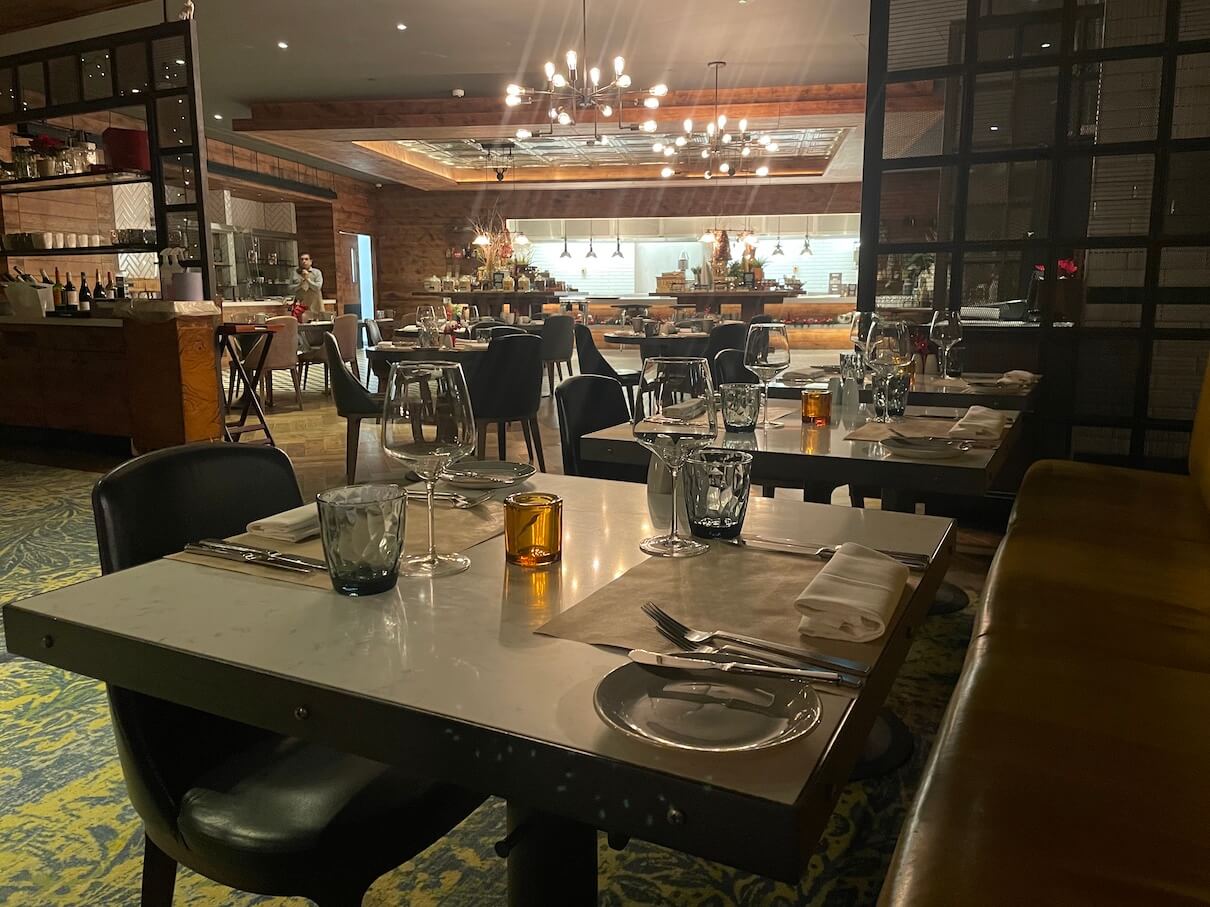 The only downside was that we were eating in near darkness, as parts of the restaurant were brightly lit, but for some reason the central part where we were sitting, had hardly any lighting. I’m all for a romantic atmosphere but we had to get out phone torches out to read the menu. We left the couple sitting next to us peering at their menus in the gloom and dashed off to Covent Garden, with the staff kindly hailing a taxi for us.

After a delightful night at the theatre, the beauty of the Hilton London Bankside’s central location is that we could walk back to the hotel from Covent Garden across Waterloo Bridge and along the south bank of the Thames, which was a lovely way to end the evening.

Just a few minutes after waking up in my hotel room I was swimming in the heated indoor pool which I had all to myself – a wonderful way to start any day. 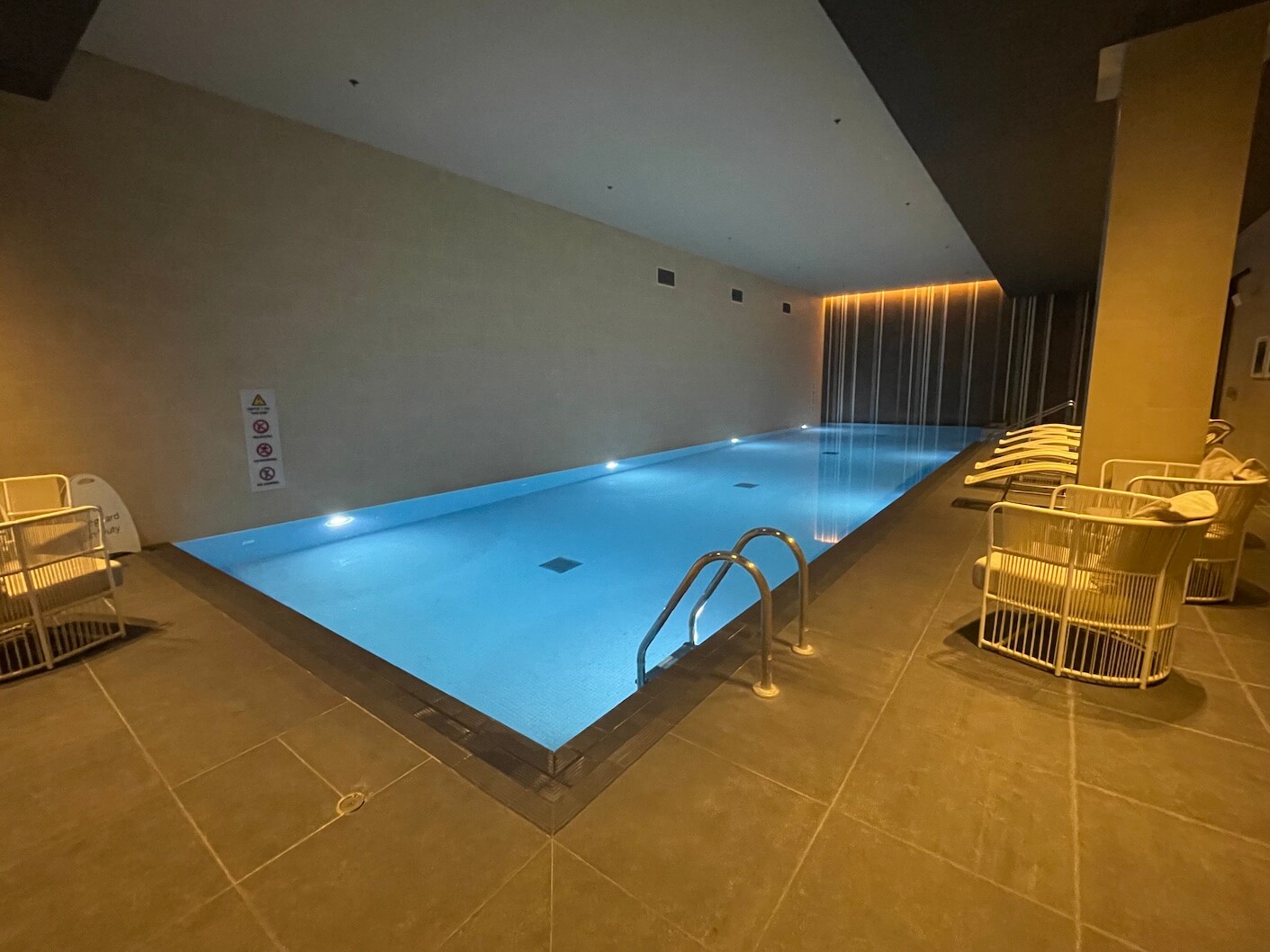 After a post-swim bath and coffee back in the room, we headed downstairs to OXBO where an impressive breakfast selection was laid out. As it’s a busy hotel and large restaurant, the set-up is more inclined towards a help-yourself buffet rather than lots of cooked options, but there were some on the menu for those who wanted something made freshly to order, such as a bacon sandwich, pancakes or waffles plus an efficient omelette pass. 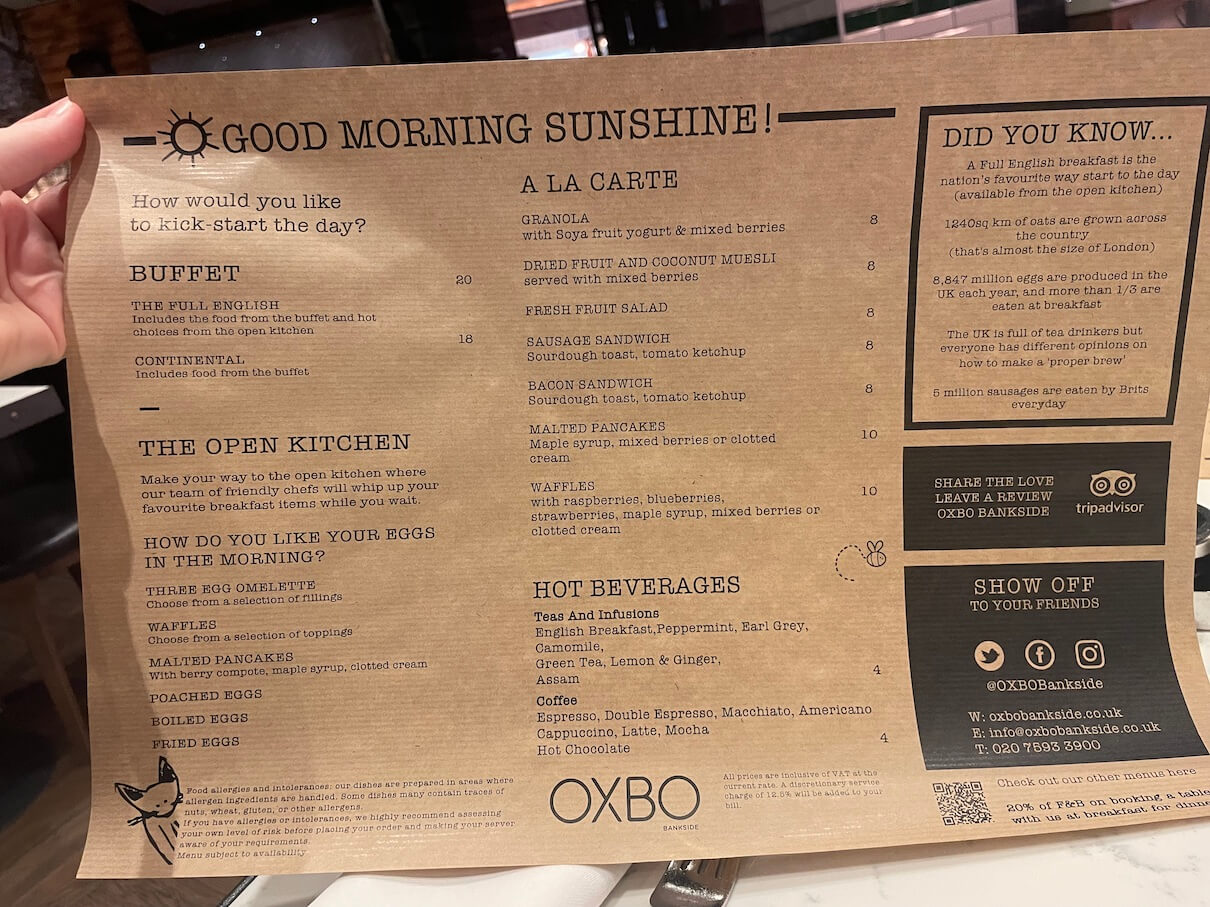 The buffet selection was vast, ranging from yoghurts and cream cheese to cereals, pastries, a huge array of nuts and seeds, fresh fruit, cold meats, cheese, veggie sticks, smoked salmon and freshly squeezed juices. There were two fast-working coffee machines as well, and I downed several cappuccinos while enjoying my freshly made omelette. (OXBO also does a famous ‘bottomless brunch‘ at weekends). 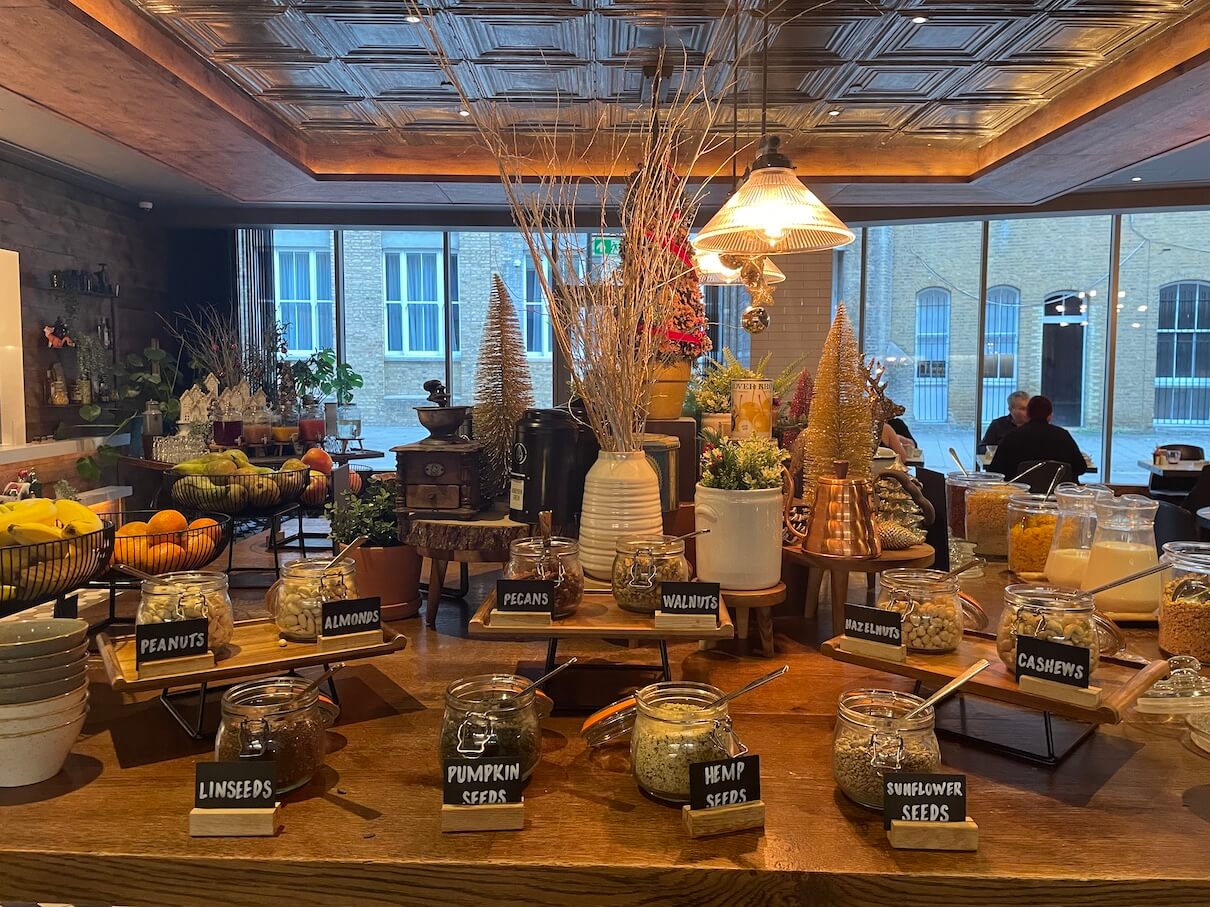 It was then time for a quick tour of the hotel, to make sure I hadn’t missed anything. This is one of my favourite parts of reviewing hotels as there’s always something unique to each hotel, and Hilton London Bankside was no exception: my very first fully Vegan hotel room. Hilton claims that this is the world’s first ‘Vegan Suite’ and it has certainly gone all-out to make sure that every aspect is vegan, consulting The Vegan Society on the design of the room. 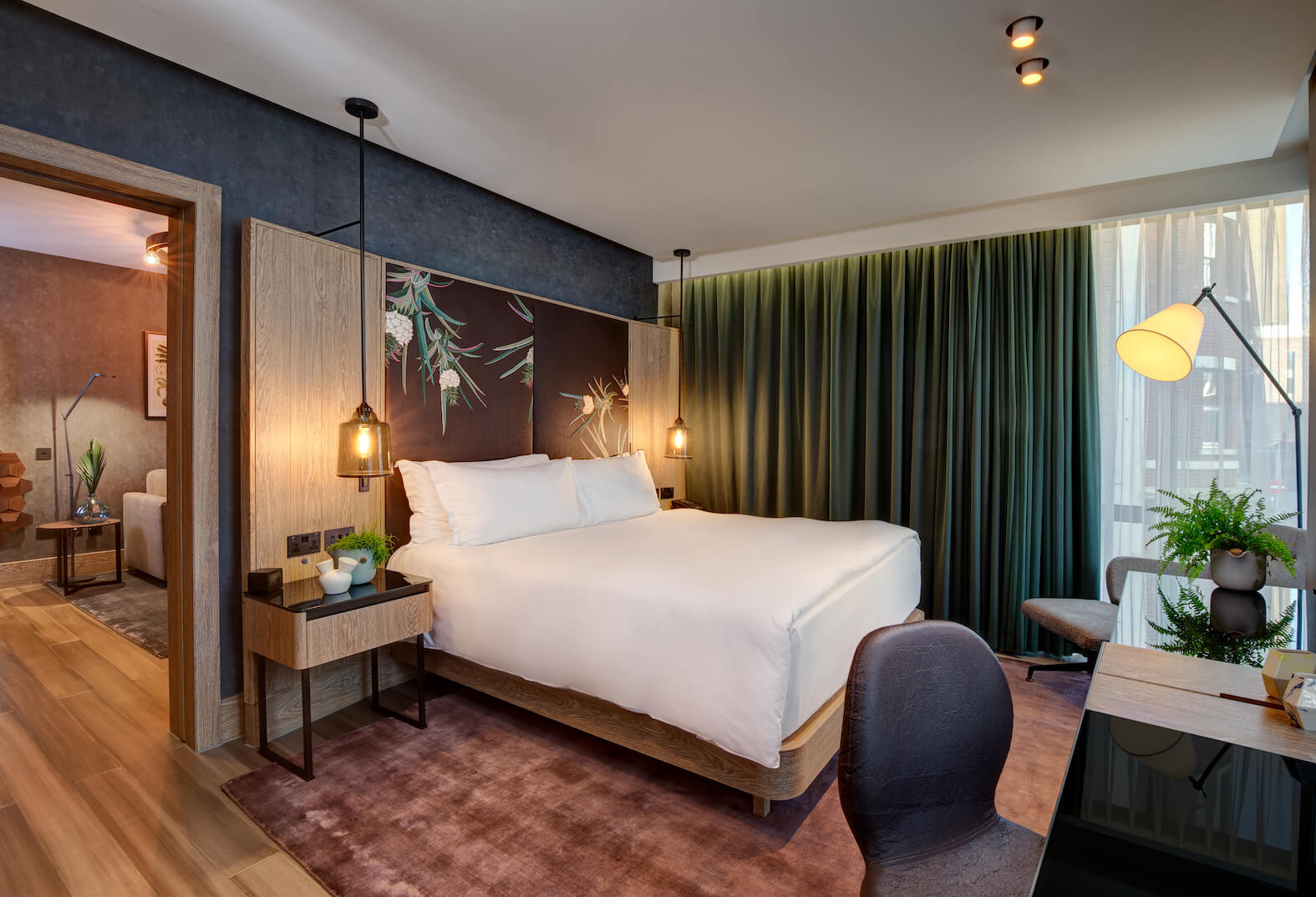 There’s vegan bedding, vegan mattresses, vegan flooring, vegan toiletries, vegan chairs upholstered with Pinatex, a natural leather made from pineapples, a vegan minibar and vegan stationery: staff are trained to use only vegan cleaning products when maintaining the room, and there’s even a vegan check-in desk for guests to use when they arrive.

Aside from the vegan suite, there’s a conscious effort to be as ‘back to nature’ as possible in spite of the central London location, so there’s a kitchen garden and the hotel’s own bees living in beehives on the roof, both of which supply the restaurant and bar where possible. 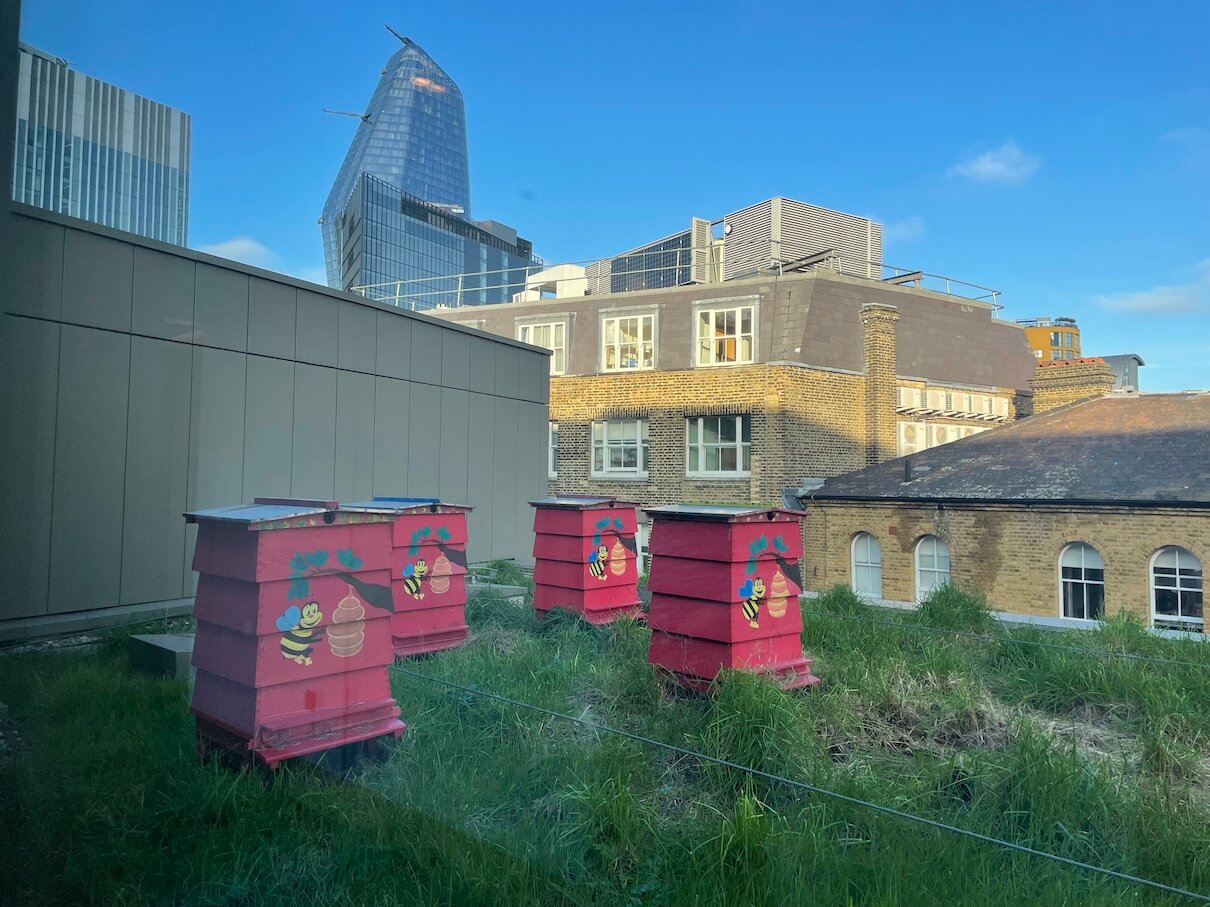 Back in the main lobby, screens next to the lifts play films relevant to the season, so there’ll be Home Alone and The Muppet Christmas Carol playing to waiting guests at Christmastime, and romantic comedies around Valentine’s Day – another quirky touch to lift the hotel away from potentially being too corporate branding. 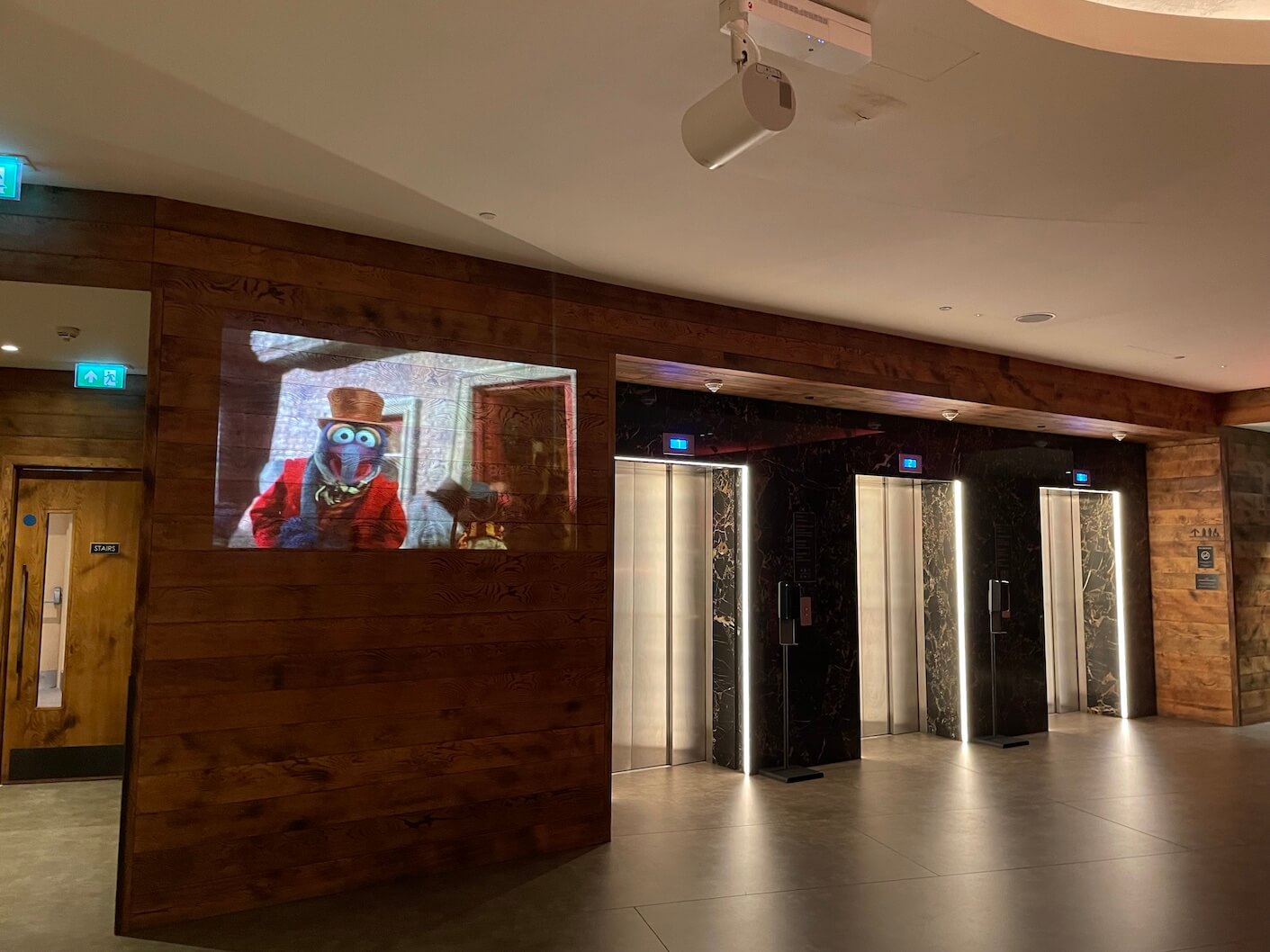 The Muppet Christmas Carol was playing to guests during our stay

When it came to leaving, staff were again super-efficient in finding us a taxi, even going down the end of the road to hail one so we didn’t have to wait outside in the cold, and helping us into the taxi along with all our luggage. Before this visit, I hadn’t stayed in a Hilton hotel for years and was pleasantly surprised to find out how much effort had gone into the little details which can make a hotel stay memorable – even if you are there mainly for its great location.

Like this review of Hilton London Bankside? Then why not Pin It? 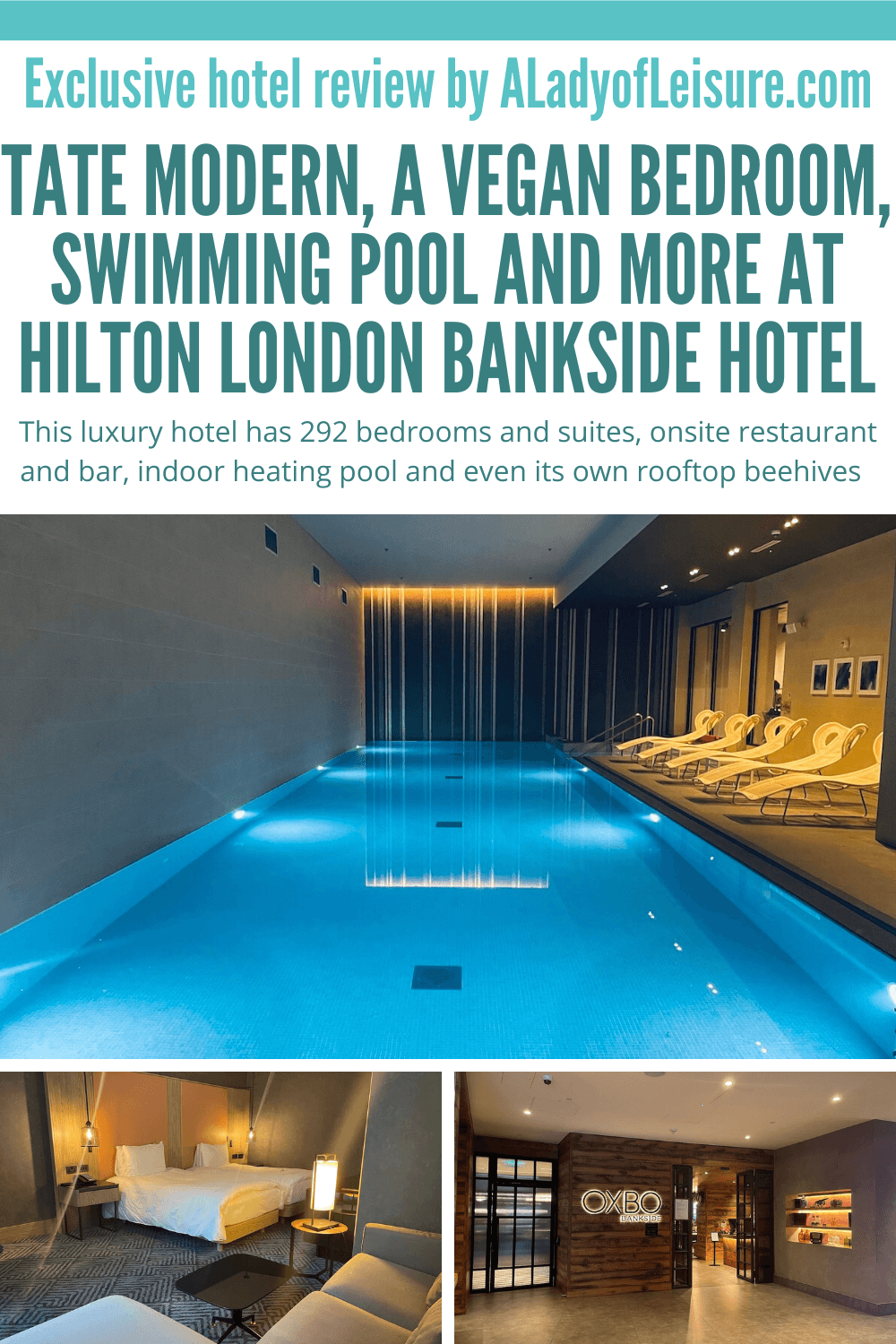