I honestly thought my mum was going to join in at one point. We were at the Theatre Royal in Drury Lane – normally home of Frozen, the Musical – at Classical Everywhere’s one-off performance of Handel’s Messiah The Live Experience and during a particularly rousing choral section (of which there are many), my mum practically levitated off her seat, arms conducting and on the verge of bursting into song. 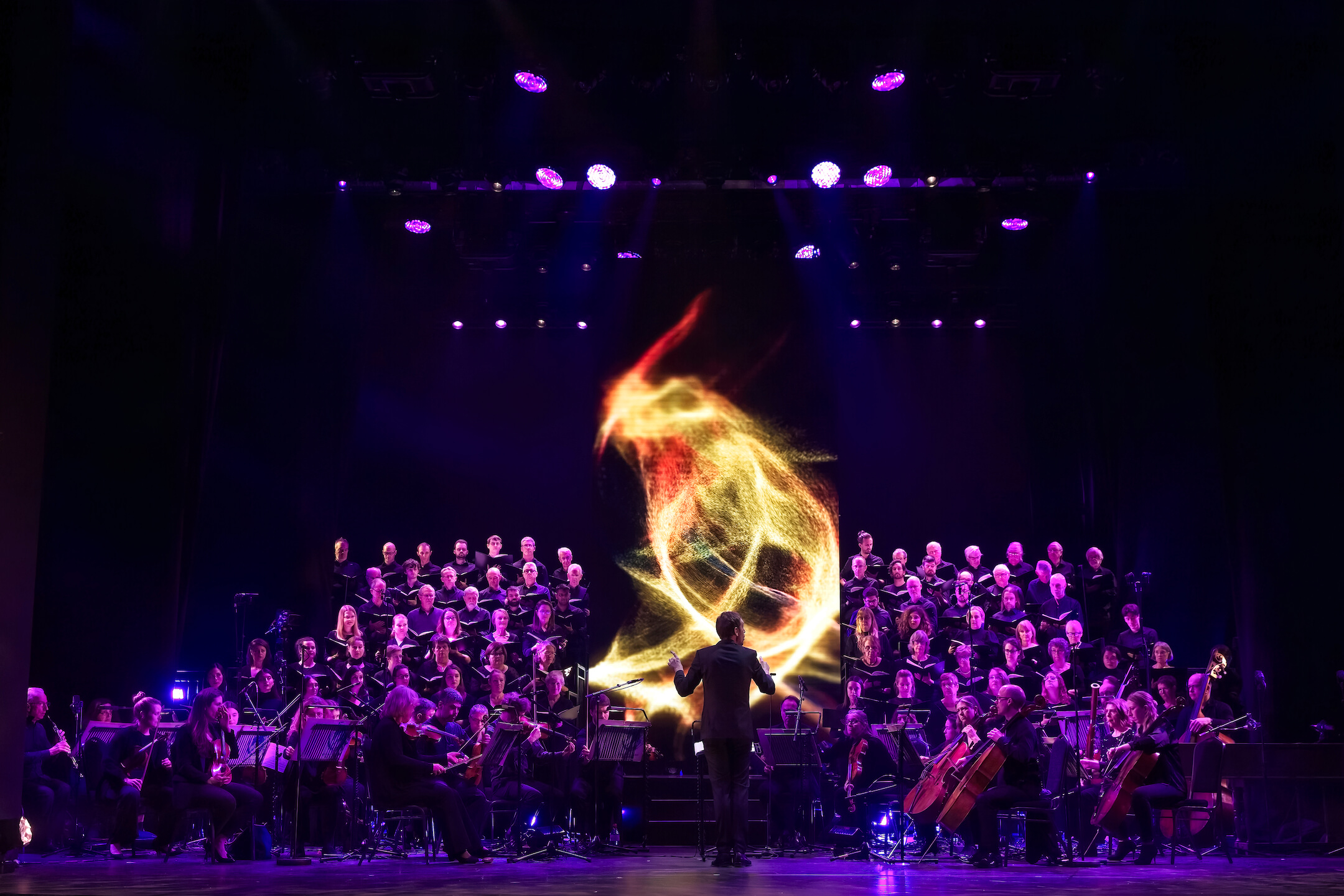 ‘I want to join in!’ she whispered to me. Yes, I could tell! This really brought home to me the delight of a live, communal experience, the likes of which we have missed for so long and which are only just starting to get back into.

Judging by the reaction of the audience at the end of the night, it wasn’t just us which had enjoyed the night far more than the performance itself – you could find the excitement throughout the theatre as people discovered again all the things they’d loved about going out for the evening; the buzz in the lobby, the thrill of finding your seat in this plush, red, traditional theatre, the hush as the lights went down and the delight of watching something you couldn’t pause, rewind, or watch while checking your emails. 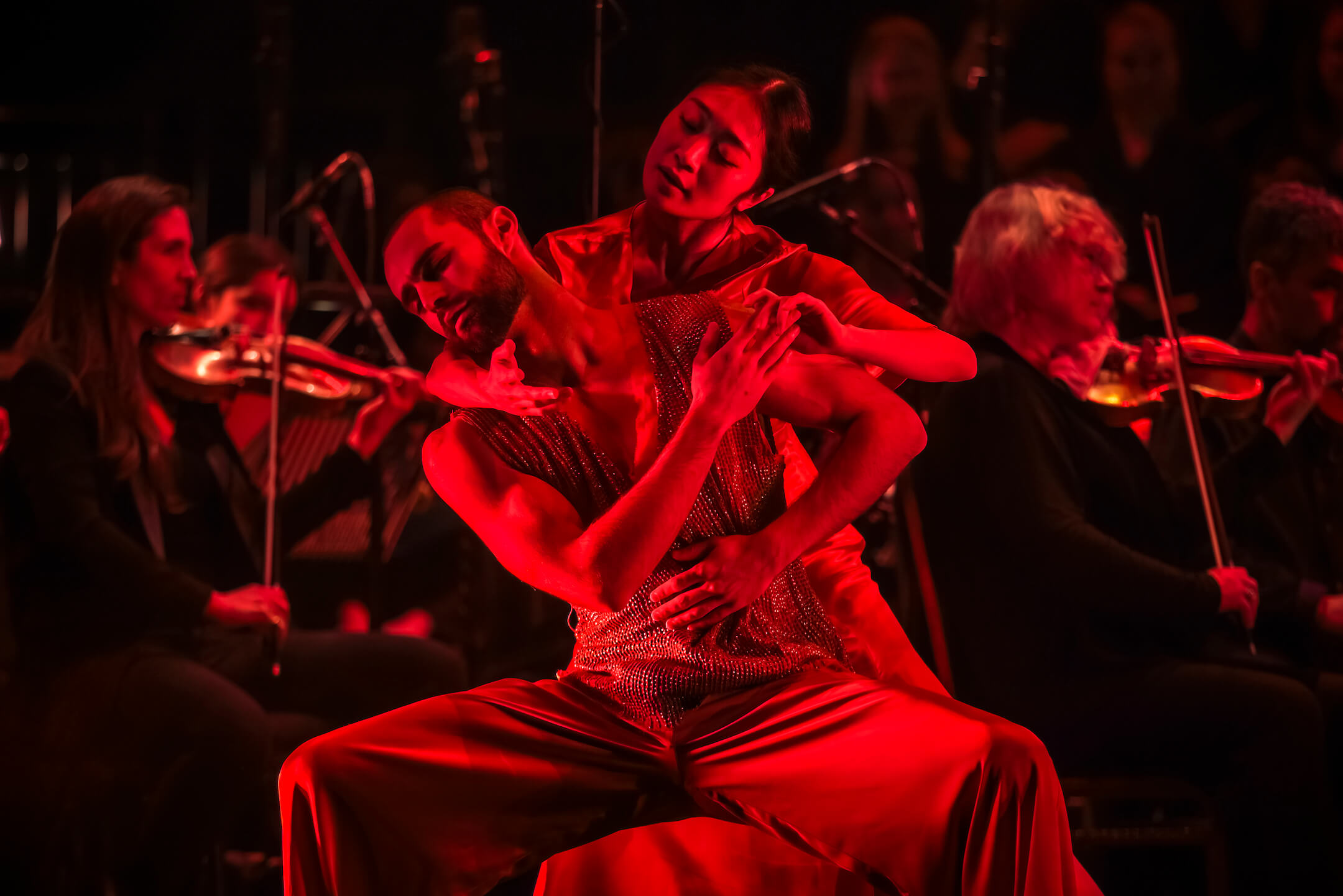 This performance of Handel’s Messiah, one of my mother’s favourite works, was presented by Classical Everywhere with the English Chamber Orchestra and the London Symphony Chorus. Classical Everywhere is a new venture from Immersive Everywhere, the creators of live events such as Peaky Blinders: The Rise, Doctor Who: Time Fracture and The Great Gatsby and it promised world-class musicians and innovative and imaginative lighting design, visual effects, choreography and staging of Handel’s much-loved musical telling of the story of Christ, with its universal human themes of birth, hope, joy, suffering, sacrifice and redemption.

The fact this would be different from a traditional concert experience was clear from the start. The orchestra almost filled the stage, with the chorus standing behind, and from the opening notes of Handel’s masterpiece there was the added element of drama, with actors and dancers coming through the aisles near the audience towards the stage. 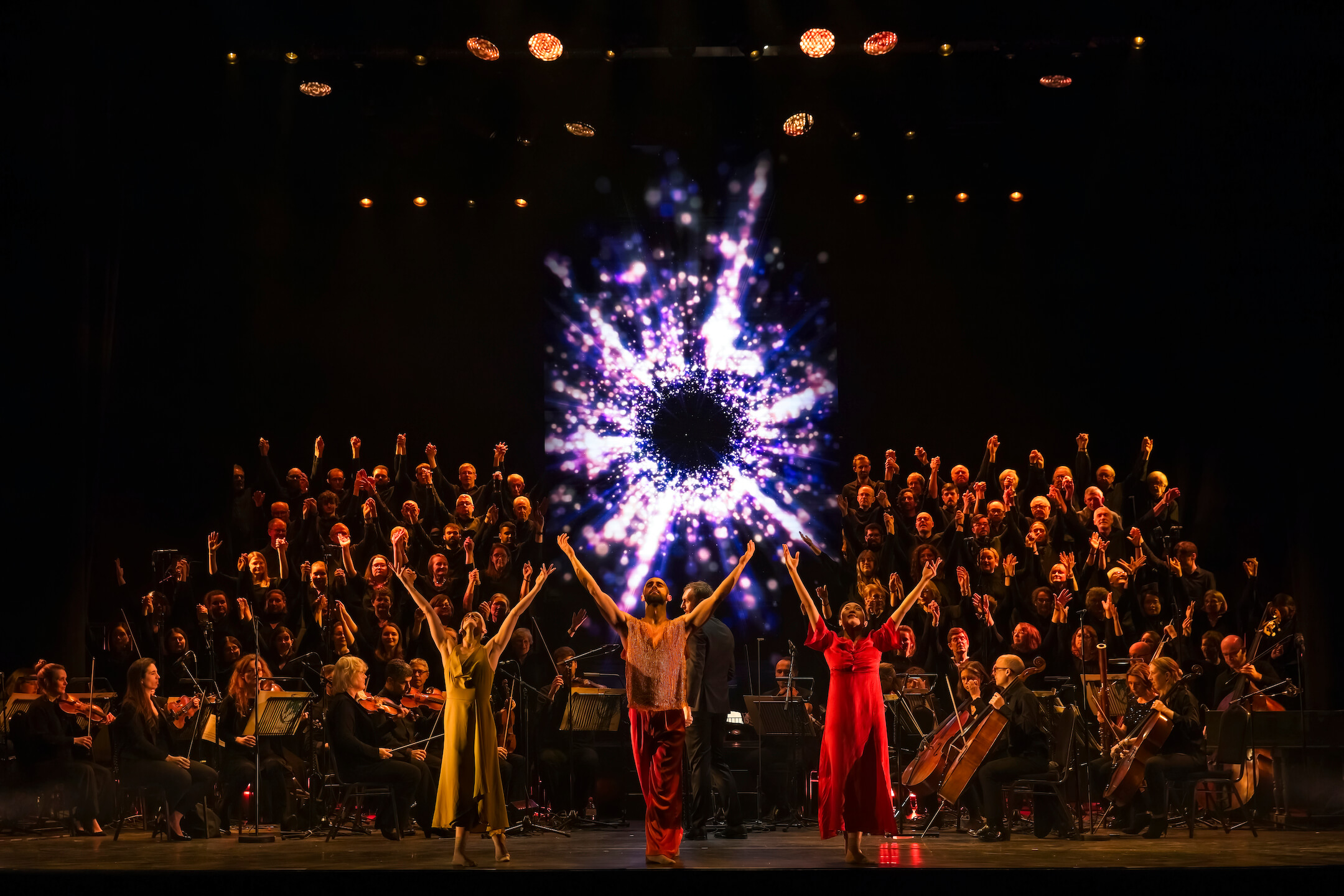 Dividing the orchestra on the stage was a large projection which had some impressive visuals throughout the performance, from the rising sun to lightning, rain and some graphic-design, screensaver-esque elements which were occasionally memorising but thankfully not distracting from the music itself.

It soon became clear that there were three dancers, the ‘Rebel’, the ‘Leader’ and the ‘Healer’ and they soon graduated from the stalls to the stage itself, translating musical sections into dance for many parts of the work, adding an extra element to the traditionally music-only affair. This was what was meant by the ‘immersive’ element of the production and it worked really well, thanks to the skill of the dancers and the excellent choreography in what was a fairly tight space. 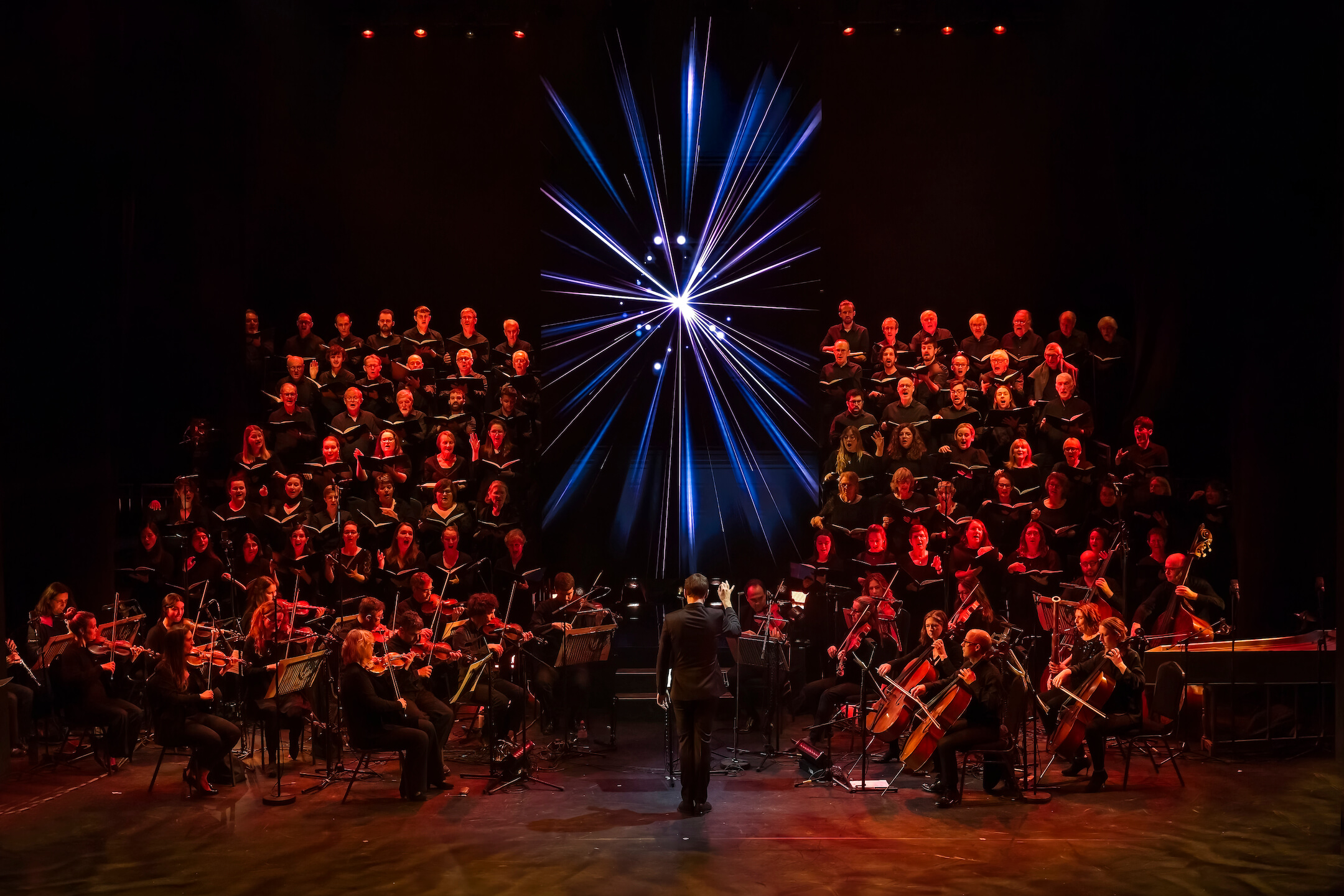 I would have loved even more immersion, with more dancers and even singers mingling with the audience, filling the aisles and enabling a truly ‘in the round’ experience, but that might work better in a show which plays for weeks or months, rather than just a one-off with a limited rehearsal window.

There were poetry readings too, from the ‘Mother’ and ‘Child’ narrator which worked in parts – the readings were well done and it added something extra to the choral work in terms of dimension, if not subject matter, but the actors held crib sheets which made it feel a bit knocked up rather than well-rehearsed, and they were dressed for some reason in the kind of peasant garb featured in every film from Holy Grail to Game of Thrones, all furs and skins and cloth trousers and a rather odd codpiece. 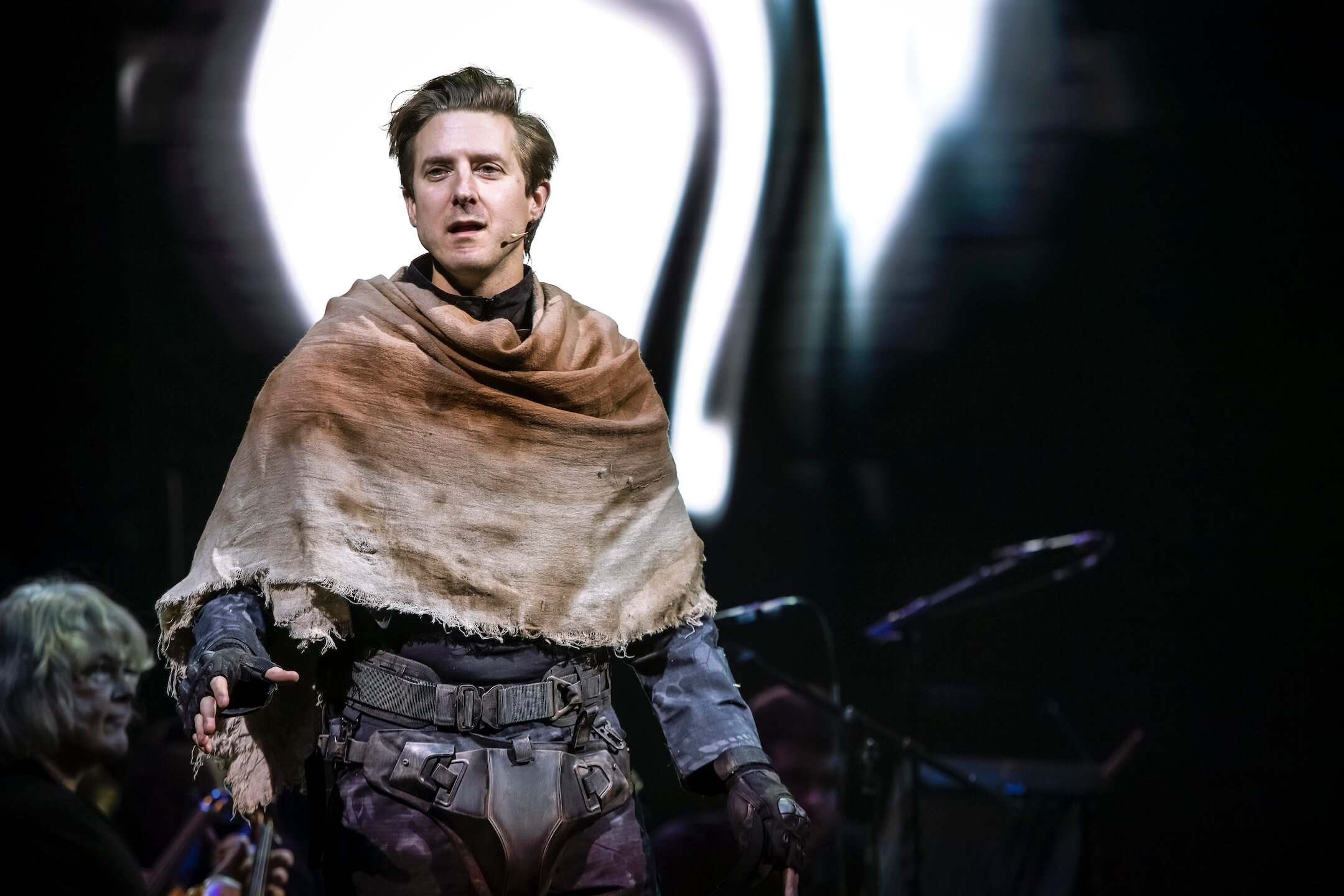 There was no faulting the soloists though, who were all superb and bought passion and vigour to their roles: soprano Danielle de Niese, mezzo-soprano Idunnu Munch, the burly baritone-bass Cody Quattle and Nicky Spencer, tenor: all were memorising to watch and brought Handel’s famous arias to life. Anyone who had previously sat through The Messiah purely for the stunning choral numbers would have come away with a renewed appreciation for the solo pieces and determined to listen to it all again the moment they got home. 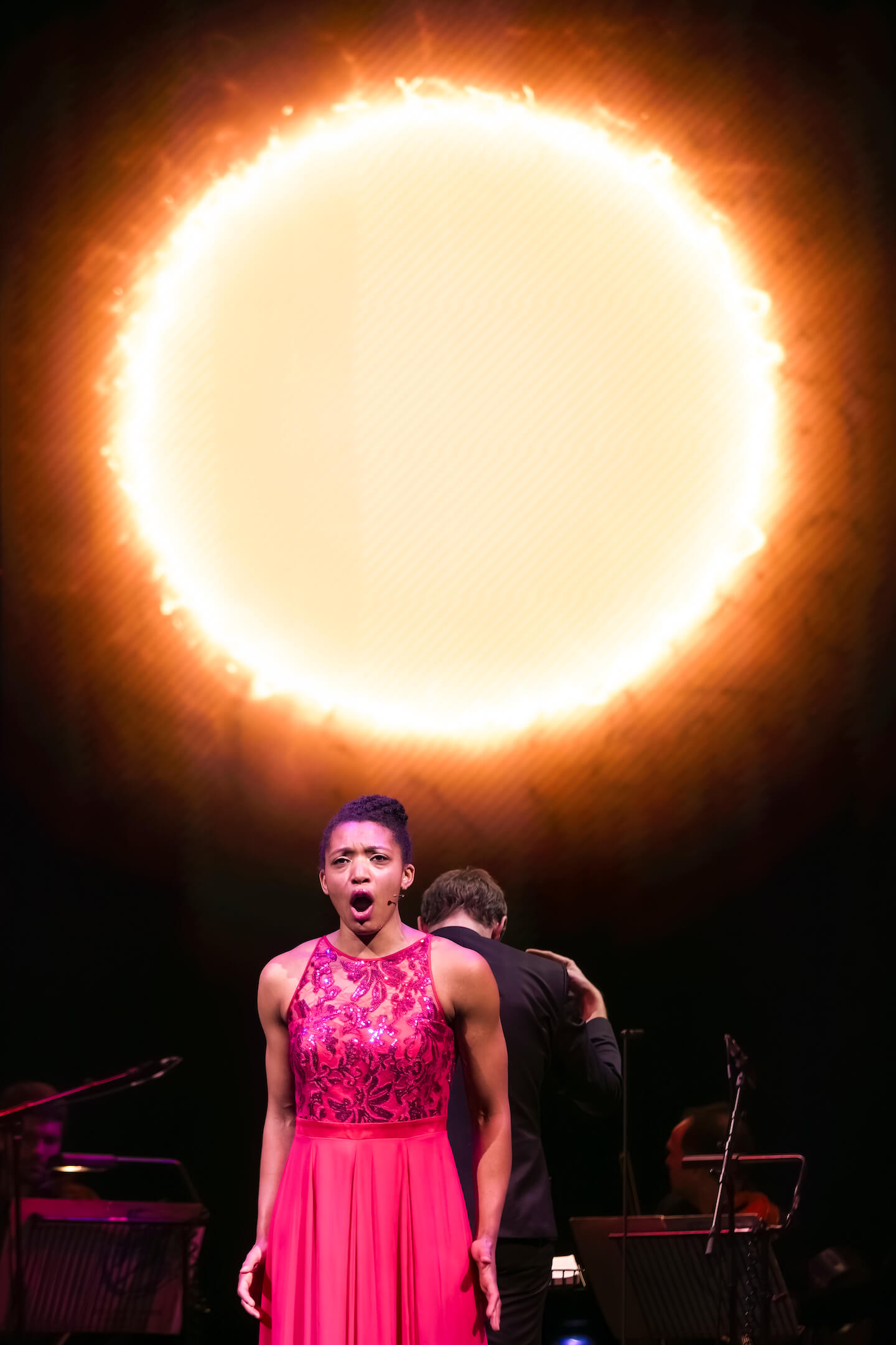 It is the big choral works that Handel’s Messiah is most famous for those and the London Symphony Chorus did not disappoint, from the beautiful tones of For Unto us a Child in Born, All We Like Sheep, and of course, the Hallelujah chorus, which had two-thirds of the audience on their feet (and some thinking it was the end, and getting ready to leave). That there was more to come was a treat. 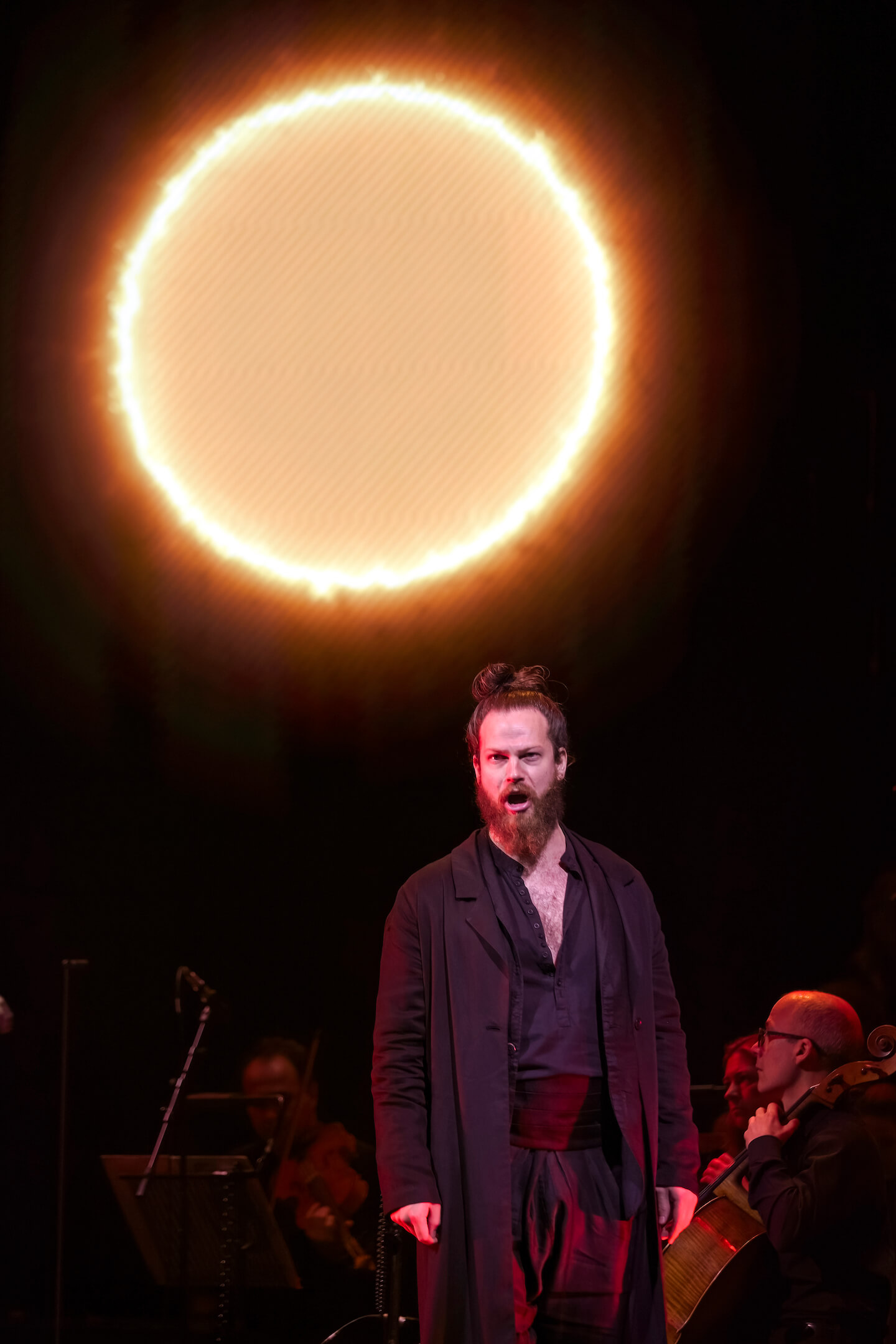 Cody Quattlebaum was big, bold and a brilliant baritone-bass

After the many ovations and heartfelt applause were over, we walked across the river back to our hotel and were still singing Handel’s music when we went to bed – and still when we woke up the next morning, a testament to the music and the joy of hearing it performed live once again.

Immersive Everywhere works with world-famous titles to create live theatrical experiences, such as Doctor Who: Time Fracture, with BBC Studios, and Peaky Blinders: The Rise, co-created with Steven Knight and Caryn Mandabach Productions. They produce and manage one of the world’s most successful immersive productions: The Great Gatsby, which has played in London since 2015, as well as Cardiff, Dublin, Brussels and Seoul.

Going to London’s West End? Then check out these excellent London hotels to stay in after the performance: Discovering hidden treasures at The Stafford hotel, central London; A relaxing luxury spa break at The Corinthia hotel, London; Rooftop cocktails and a spa make The Montcalm Royal London House a top-to-toe destination; A penthouse stay at nhow, Shoreditch; A central London stay at Mayfair Townhouse, Piccadilly; Montcalm Royal London, Moorgate; The Royal Horseguards hotel near Trafalgar Square; Bloomsbury hotel, Bloomsbury; Point A hotel, Kings Cross; One Aldwych, the Strand; St James’s hotel and club. St James’s; The Marylebone, Marylebone; The Kensington, South Kensington; A Sherlock-worthy stay at Holmes hotel on Baker Street; Mayfair Townhouse off London’s Piccadilly; A luxurious five-stay at at The Stafford, Mayfair; Disco lights and a budget stay at Point A, Kings Cross