Home / Travel destinations / Lunch with the Queen (and 10,000 other guests) at the Patron’s Lunch

It was the most British of days. The Patron’s Lunch last Sunday had the Royal Family, it had cucumber sandwiches, it had queues and Pimms and cups of tea. And an awful lot of rain. It was as if someone had tried to work out what would make the day as British as possible, and then just chucked all those elements together. If only there had been an impromptu game of cricket down The Mall – then it would have been declared the Most British Day Possible. But of course, rain would have stopped play. 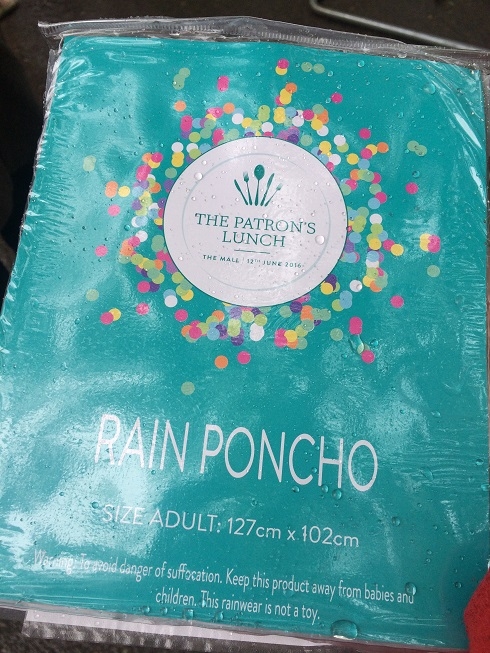 A vital piece of kit…

Thankfully the British cope rather well in the rain, so there was no grumbling in the various queues (no more than 20 minutes in all) to get through security and ticket check and onto The Mall itself. Instead there were lots of wry smiles and hopeful glances at the grey skies, and almost ecstatic delight when waterproof ponchos were handed out. (Some people took umbrellas through onto the Mall, much to the annoyance of everyone else who’d read the rules saying that umbrellas were strictly forbidden.) 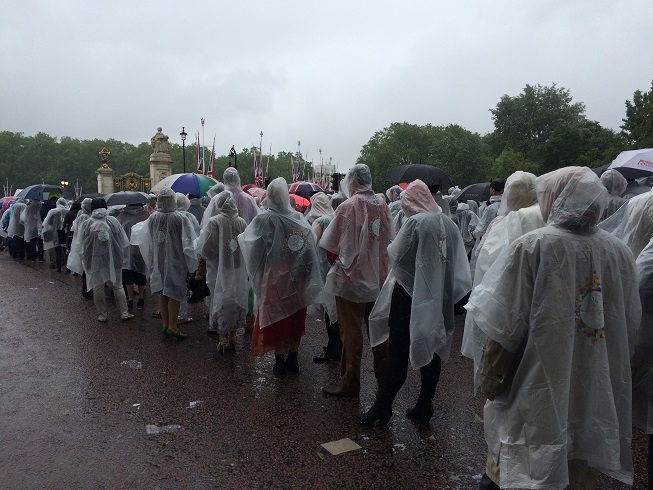 However the ponchos while being transparent were surprisingly robust and effective. So, swathed in plastic and looking like something out of a sci-fi film, we trooped past Buckingham Palace.

It was a great novelty to see it looking so calm and serene without four lanes of traffic hurtling past in front of it, and indeed the seating area where 10,000 people were setting up to dine was also quite calm and relaxed. I’d expected the crush of a crowd, tempers fraying as people fought to get to their seats, but no, it was all very cheerful and unfailingly polite. 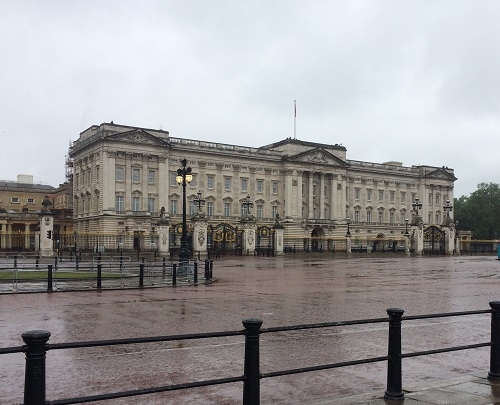 All the tables were clearly marked with a number, and there were hamper collection points nearby marked with a letter, so it was just a case of collecting your hamper (no queue) and finding your table. 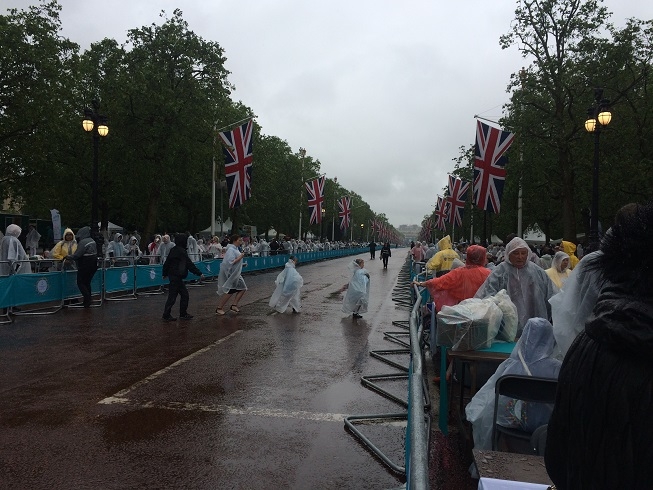 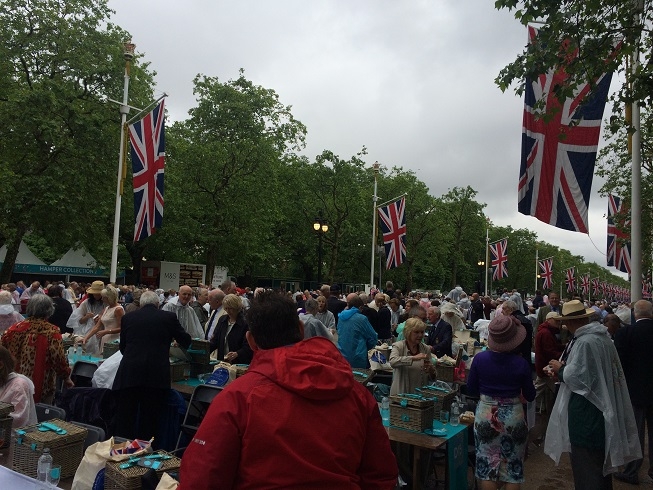 There were 10,000 people having lunch on The Mall

As the rain was still coming down there was no question of anyone trying to look smart or dignified which gave the occasion a pleasantly relaxed air. The few people who had either ignored or just not seen the weather forecast and were thus sporting heels or light summer dresses were given pitying rather than scornful looks (some people looked really impressive though). 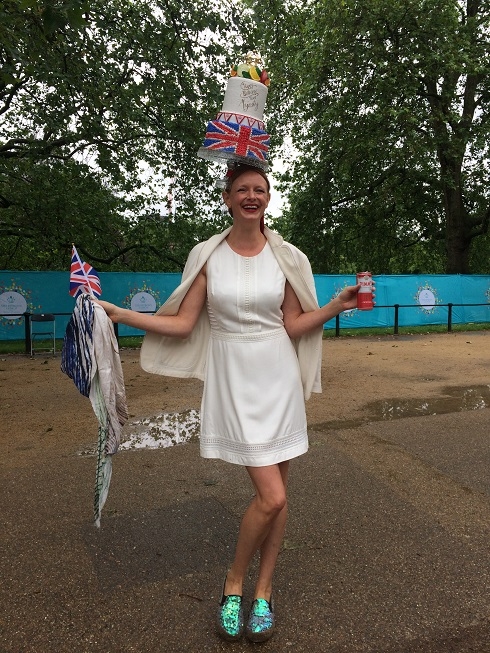 Some people braved the rain without a poncho and looked fabulous

A queue of ponchos had formed at both the beer and the tea tents – making for a quintessentially British image – but thankfully being guest of sponsors Pimms my sister and I were in need of neither and instead found our allocated seats on one of the dozens of trestle tables lining The Mall. 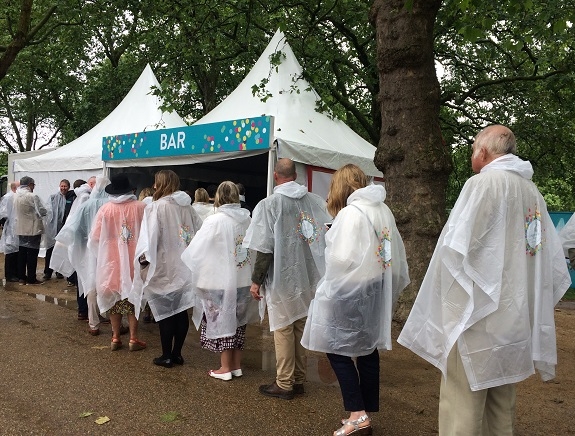 They queued for beer… 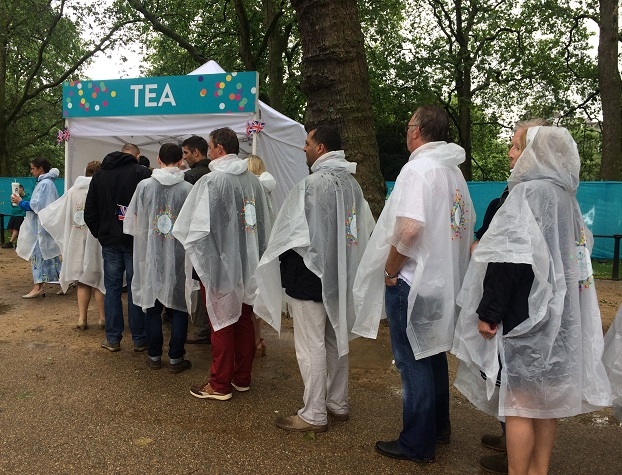 … and they queued for tea – what could be more British?

The hampers looked very smart – from M&S, but with an almost Tiffany-blue leather strap – and were pleasingly full of food, with sandwiches, smoked salmon mousse, a chicken (or egg) salad, a pork pie, posh jelly, apple juice and a can of Pimms. 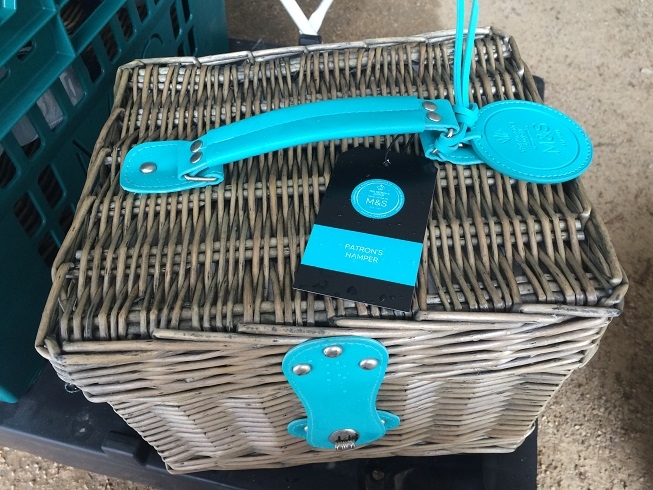 My rather smart M&S hamper

There was a blue commemorative plate, cutlery and a stemmed glass and best of all, the rain stopped just as we started eating and wouldn’t really get going again for the rest of the day. 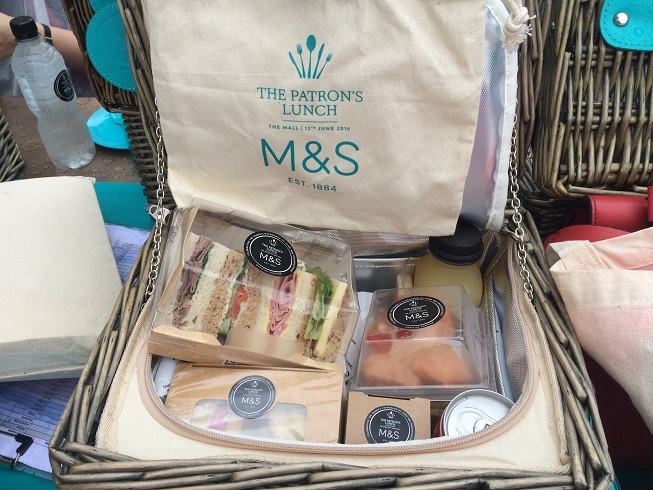 Each hamper contained sandwiches, a salad and a can of Pimms as well as other goodies 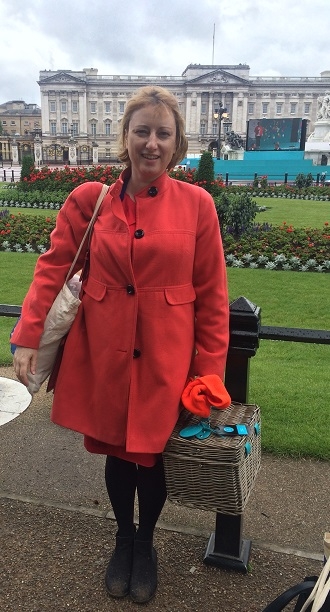 Proof that the rain actually did stop during the afternoon!

As we ate, brass bands and various dancers paraded down The Mall – (a vast improvement to the music that had been playing over the loud speakers, which included Careless Whisper and the theme from The Office which wasn’t especially cheerful or patriotic).

Once everyone had polished off their hampers the Royal parties arrived to talk to the representatives of the 600 charities which have the Queen as their Patron. This was the cue for everyone to jump up and crane their necks over the barriers or watch on the big screens.

Harry, William and Kate jumped out of a car at the middle of the The Mall, Prince Edward, Sophie and and their daughter Lady Louise were a little way down, Prince Andrew, Eugenie and Beatrice walked from Buckingham Palace at the other end and Princess Anne was also seen chatting with the crowd.

Finally the Queen herself arrived with Prince Philip – they’d both been seen peeking round the curtains at Buckingham Palace to check what was happening outside – and the Royal couple received a massive cheer as they got to their feet for the ride down The Mall before speeches and of course, a rousing rendition of Happy Birthday (for which the words had been helpfully printed in the programme).

Later, on the way back to Victoria station, two women tapped us on the shoulders. ‘We’ve been following you for five minutes,’ they said. ‘We couldn’t help but notice your hamper – have you been to the Patron’s Lunch by any chance?’ We proudly produced our empty hampers as proof. I gather some people have put theirs on eBay. Mine is safely home with me and will certainly not be going up for sale. It might even have dried out by now…

One thought on “Lunch with the Queen (and 10,000 other guests) at the Patron’s Lunch”