Home / Casinos / A timely jackpot at the Hippodrome casino London

The timing couldn’t have been better, at least not for the Hippodrome casino, London. The moment I walked past the gaming area in the central London casino, one of the slot machines paid out the entire jackpot, handing the person playing on the machine a cool £12,536 on a £1 spin. Considering I was on a guided tour of tour by one of the staff at the Hippodrome, it was pretty good PR.

Striking it lucky at the Hippodrome, Leicester Square

I was almost as excited as the woman who had just struck lucky – although I was pretty envious too, as I’d just been playing on the machine just along from her on exactly the same game – but my tour guide Michael was pretty nonchalant.

‘Hey, it happens here all the time,’ he shrugged.

The Hippodrome first opened in 1900 as a circus variety theatre and over the years has been a nightclub, restaurant, cabaret venue and now casino

Now I’m not sure that’s strictly true – the casino wouldn’t be very good at making money if it did – but it was certainly a novelty to see the machines paying out for once. (I know the woman had probably put in more than a pound before her jackpot spin, but I’m assuming she was still considerably in profit after the £12k payout.)

I once spent New Year’s Eve at the Grosvenor Victoria on London’s Edgware Road and had a really pleasant time dancing and drinking and dining and, for some reason, trying to work my way through an enormous cigar. One of my friends, though, went downstairs to the slot machines and won £200 instantly. Needless to say, he was delighted. Equally predictably, when he went back the following week to repeat the achievement, he ended up returning the £200 to the machine, with interest. Putting £12,536 back would be rather more unlikely (I hope). With any luck – pun intended – she instantly cashed out and left the Hippodrome, thankful of her good fortune.

History of the Hippodrome

The very mention of the Hippodrome is likely to stir up distant memories of – depending on your age – the coolest night spot in town, or a rather dodgy venue with sticky floors and the feeling that the best of its years were behind it. For those with even longer memories, the Hippodrome was the location for the highly successful restaurant/nightclub Talk of the Town, which featured global stars such as Eartha Kitt, Shirley Bassey, Judy Garland, Sammy Davis Jr, The Jackson 5 and Tom Jones, and was where celebrities of the day went to see and be seen (memorabilia including records, programmes and photos are found on some of the walls).

Even further back, when the venue was first opened in 1900 as a circus variety theatre, the Hippodrome featured a 100,000 gallon tank in which polar bears, sea lions and elephants would swim. A few years later Harry Houdini would baffle and entertain the audiences and there was high-brow entertainment such as ballet performances too. 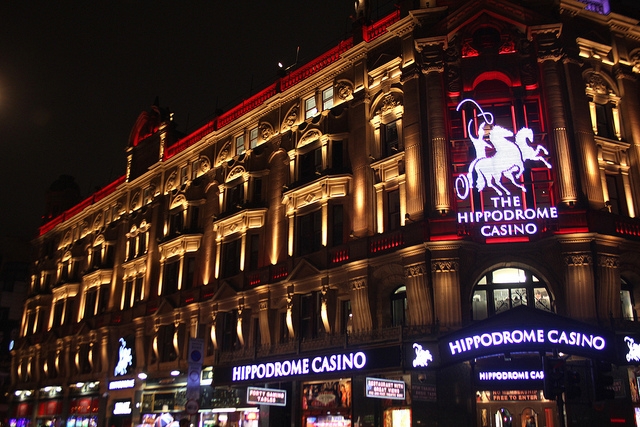 The Hippodrome is on the corner of Leicester Square and Charing Cross Road, right in the heart of central London

Renovation of the Hippodrome

However the later part of the century saw the venue struggle and lose its place on London’s social scene. After a period as a nightclub (managed by the late Peter Stringfellow), the Hippodrome has now undergone a £40 million transformation by father and son leisure entrepreneurs Jimmy and Simon Thomas. While it still boasts its extremely handy location on the corner of Leicester Square in central London (it’s about 30 seconds from the Northern Line platform at Leicester Square tube to the casino entrance) it has now expanded to encompass the entire block, from Leicester Square at the front to Chinatown at the back, taking in the amusement centre next door and going top to toe from roof terrace to basement bar. 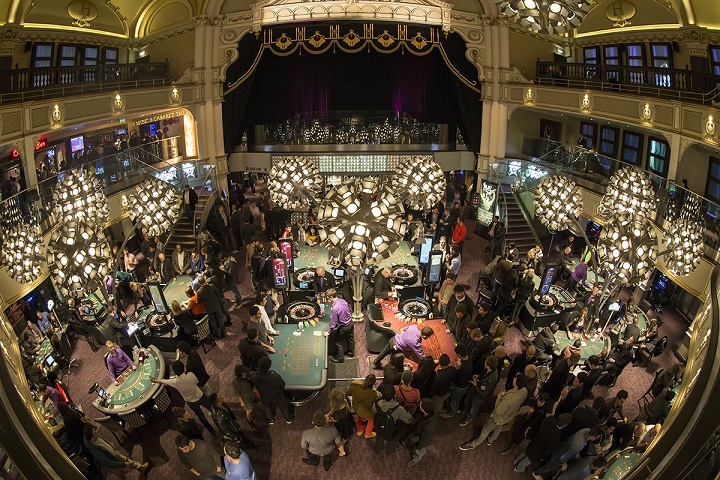 The gaming floor is a six-storey open space surrounded by a restaurant, several bars, poker rooms and a cabaret theatre

Arriving at the Hippodrome

Changes to the gaming regulations a few years ago mean that you no longer have to register a day in advance if you want to enter a casino, and unlike many other casinos, you don’t even have to sign in or register at the Hippodrome but (assuming you are comfortably over the legal age limit) can just stroll casually in without producing ID at all (say hi to the door staff on the way). Walk past the coat check and the information desk and all of a sudden the room opens out into a vast, six-storey open space, with chandeliers and a plush red carpet and the walls open all the way up, so you can be on the top floor and still look over the balcony at the action.

This layout is what I liked about the Hippodrome; that it was, possibly counter-intuitively, not just about the gambling. There were the machines, true (for which queues form at the busier times – gaming laws mean there that the Hippodrome is limited to just 20 high-stakes machines) and the central space is occupied by roulette tables, video poker and blackjack, but the mezzanine level cocktail bar which overlooks the gaming floor is totally separate from it, so you can soak up the vibes without risking a penny (in fact the bar floor is composed of £30,000-worth of pennies). 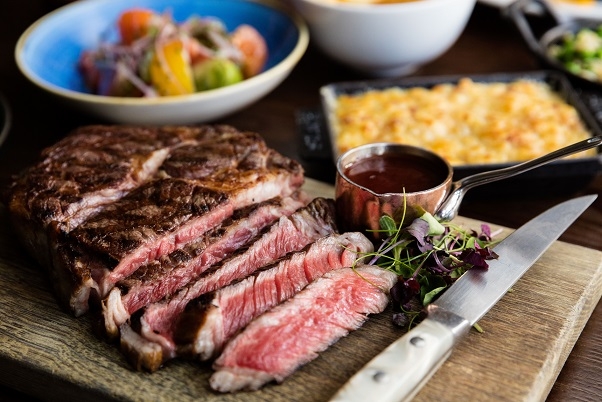 Heliot restaurant at the Hippodrome

Also over-looking the central space is the split-level restaurant, Heliot steak house, named after the lion tamer Claire Heliot, and which as you’d expect, prides itself on its USDA-approved prime steaks which range from fillet and sirloin to rib-eye and T-bone. We opted for the three-course menu (which was good value at £17.95) and shared the goat cheese lollipops with lemon curd and beetroot salad starters, followed by fillet steak and to finish, chocolate and orange ganache and almond millefeuille, all excellent.

The beetroot salad to start…

….alongside the goat’s cheese lollipops

Theatre at the Hippodrome

Above that, high in the ceiling, the outdoor bar (for smoking, gambling, drinking or all three) and dotted in between the bars are private gaming rooms, poker tables and  coffee lounges. Off the  main bar is a rather charming 180-seat cabaret space, which plays host to everything from burlesque shows to Elvis night and West End musical evenings. When I visited I watched the New York show Sondheim Unplugged which was playing for one night only and turned out to be an entertaining and informative evening showcasing the best of Sondheim’s music as well as photos, film and gossip about the acclaimed composer and lyricist.

Underneath it all is the basement bar, which has two out of London’s three full-sized craps tables and which has a non-casino retro vibe, with an old-fashioned cashier’s desk, comfy sofas and even a 1920s-style barber’s chair (where punters can get their hair cut between sessions). The whole basement is sited in the metal pool where those elephants used to swim and while there are still (in my opinion) slightly uncool elements such as cages for dancing girls, the feel is quite old-fashioned and charming. 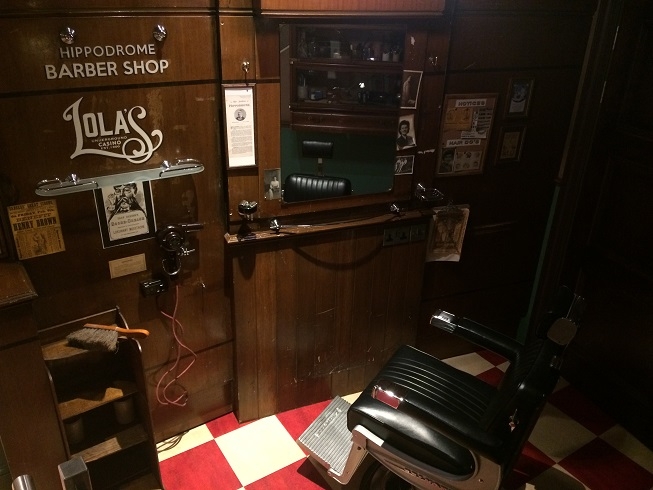 A working barber’s chair outside the Hippdrome’s underground bar, Lola’s

I’ve been back several times now with friends, not to gamble but to finish off an evening with a couple of late-night cocktails before heading home, and that’s certainly not something I’d do in other London casinos. As for being able to take home £12,536 in winnings… well, a girl can dream…

If you’re looking for a hotel in central London to stay in during your stay then look no further:

A relaxing luxury spa break at Corinthia hotel, London; One Aldwych: a Lion King slice of luxury in London’s West End; A stay at St James’s hotel and club, St James’s, London; A five-star luxury stay at The Stafford hotel, St James’s; A room (and cocktails) with a serious view at ME Hotel, London; The Gore hotel: rock and roll history in Kensington;

And if you’re looking for some Las Vegas reviews, then look no further…

Why you’re never too old to visit Las Vegas

In a Sin City stay, there’s more things to do in Las Vegas than gambling