If you’re looking for luxury hotels in the Cotswolds The Lygon Arms Broadway will be high on your wish-list. This historic hotel has been a main fixture in the beautiful Cotswolds village of Broadway since its days as a coaching inn back in the 17th century and is an impressive and unmissable part of the High Street. 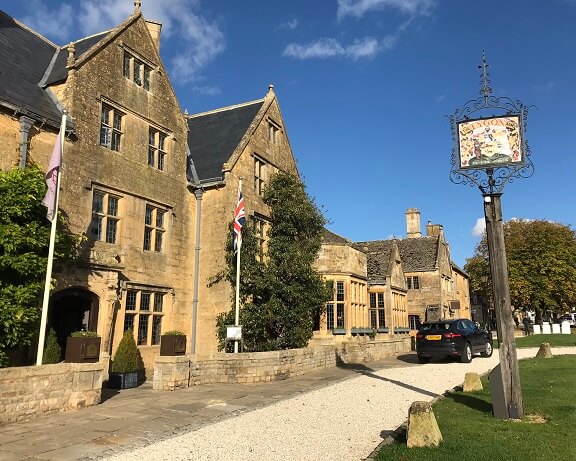 History of The Lygon Arms Broadway

The Lygon Arms is steeped in history – Oliver Cromwell stayed here before the Battle of Worcester in 1649, while Charles I also visited, so it was used by both sides in the English Civil War (presumably not at the same time) – and modern-day celebrity guests at this four-star luxury hotel over the years include the likes of Richard Burton and Elizabeth Taylor, Evelyn Waugh and Kylie Minogue.

Book The Lygon Arms at Booking.com

Visit The Lygon Arms on Tripadvisor

However my main attraction to The Lygon Arms was the fact it was owned by the group behind Cliveden and Chewton Glen, two of the nicest (and grandest, and most expensive, and luxurious) hotels I’ve ever stayed in, and while The Lygon Arms seemed like a very different proposition to those vast country house hotels, it had to be a good sign. 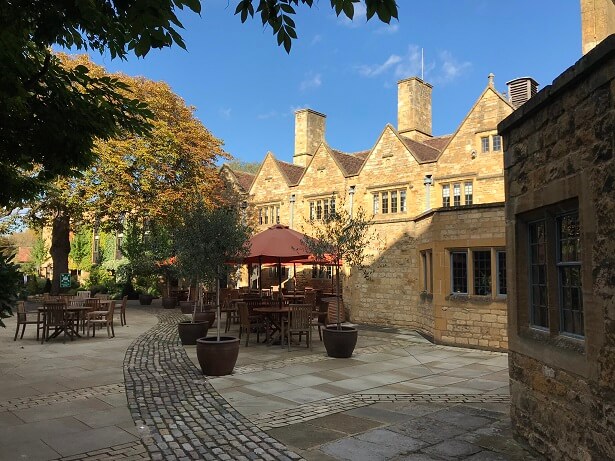 Arriving at The Lygon Arms Broadway

Over the years The Lygon Arms (pronounced Liggon) has expanded, so while the front is as imposing as it has been for centuries, the hotel itself goes back far further than I’d expected. Inside you’ll find a rabbit’s warren of rooms, bars and corridors, where uneven flagstones and low ceilings reveal the building’s age.

Check out these other great Cotswolds hotels near The Lygon Arms:

Walk through the various rooms however and you’ll find a modern-looking bar at the back and outside, a tree-lined courtyard stretching back to the access road behind, where the spa and many additional rooms are located. 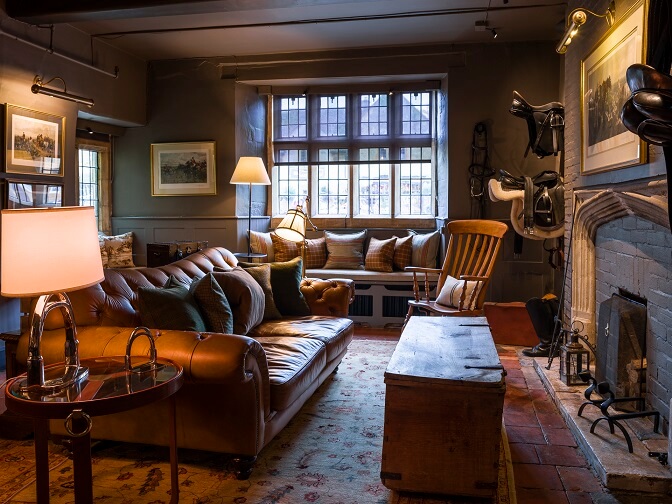 There are seemingly lovely little rooms and cosy pockets around every corner of the sprawling Lygon Arms: here is the Saddle Room at the front of the hotel 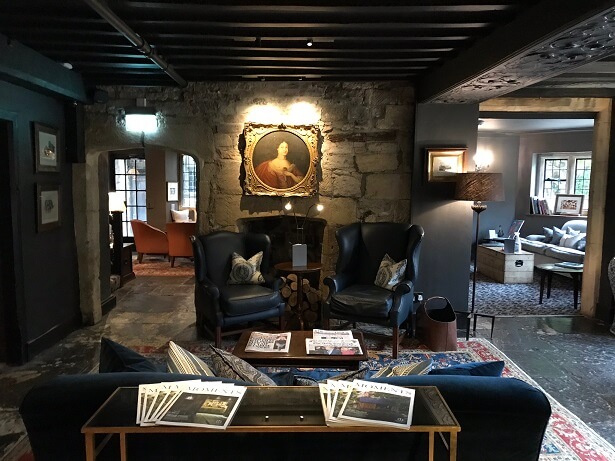 Rooms at The Lygon Arms

When Iconic Luxury Hotels acquired The Lygon Arms in 2016, the general feeling is that it was rather run down and in need of some serious TLC. Several millions of pounds later and there has been a crucial – but subtle – transformation, with the newer parts of the building blending in with the old and the really old bits looking as cosy and lived-in as befits an establishment which has served a lot of visitors over the years. After the refurbishment, The Lygon Arms now has a total of 86 guest rooms and suites: 36 in the Main House, 19 Orchard Wing rooms, 13 Courtyard rooms, 12 Garden Wing rooms, and 2 cottages. However it is all rather spread out so you never feel as if you’re crowded next to other people.

Parking at The Lygon Arms

Parking is always an issue in these pretty Cotswolds town and The Lygon Arms is no exception, so on arrival you can briefly stop outside to drop your bags off at reception before parking your car in one of several car parks around the back, or you can park, check-in and then retrieve your bags at leisure. We were staying in one of the ground-floor courtyard rooms outside the back of the hotel, and while I usually prefer staying in a hotel itself, it was just a few steps to the rear entrance of the hotel or the spa itself, and no-one batted an eye if you walked across the courtyard in your fluffy towelling robe. 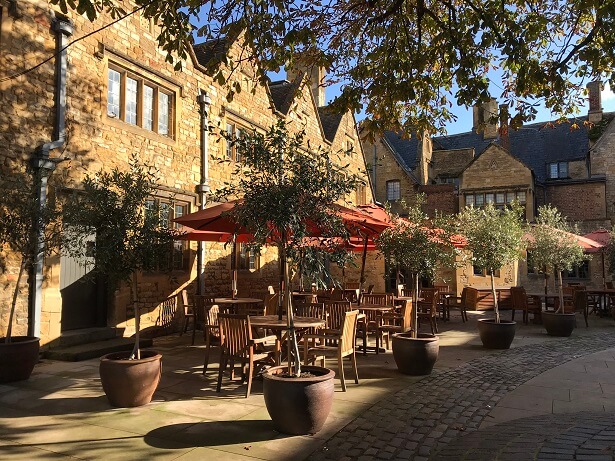 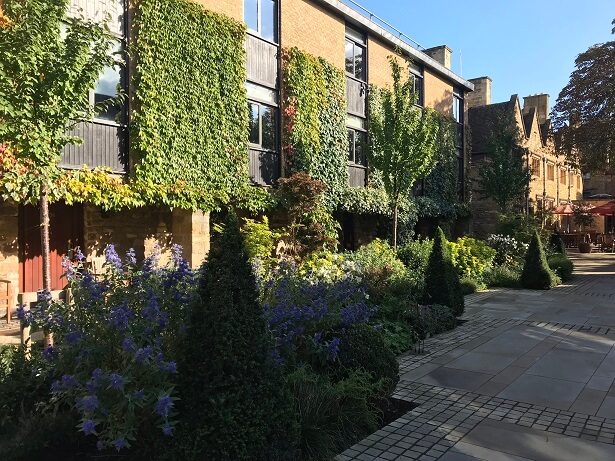 Bedrooms at The Lygon Arms

Our bedroom itself was large, with a separate TV/sofa area, lots of wardrobe space and a good-sized bathroom with bath and stand-alone shower. It was decorated in mute colours and wasn’t the lightest of rooms, but it did feel very cosy and relaxing and you could certainly stay put and not feel you had to venture outside if it was a wintry night outside.

Our bedroom was in a muted, classical style and had lots of space – there was an additional sofa/lounge space plus TV behind me when I took this pic 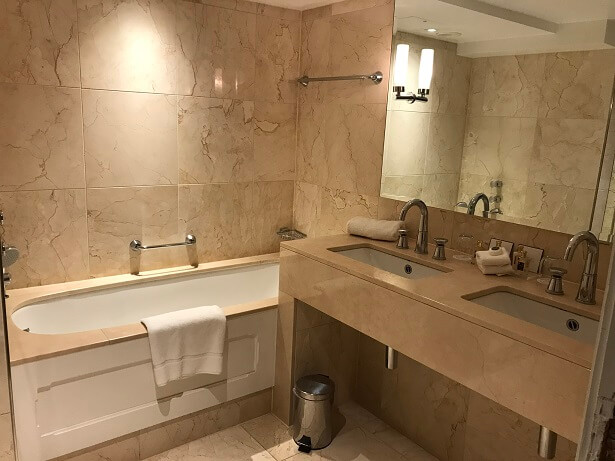 Our bathroom was smart and modern, with two sinks and a separate shower and bath

We were lucky to arrive in glorious weather, with clear blue skies and bright sunshine, and so I headed straight out to explore beautiful Broadway and to try to resist buying up most of the sprawling delicatessen across the road. However it wasn’t long before I was drawn back to The Lygon Arms for some serious relaxing and people-watching. 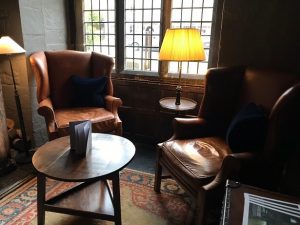 Sometimes it’s nice to grab a chair, a book and a drink and soak up the atmosphere… that was my plan!

The multitude of little rooms which form the inside of The Lygon Arms make it a perfect place for a morning coffee, afternoon tea or post-shopping drinks and there are many cosy corners to park yourself in and feel as if you have slipped back a few centuries.

However at the back there is a more modern bar, and next door and adjoining The Lygon Arms is the very modern and vibrant The Lygon Bar and Grill which soon became my favourite room.

With its contemporary decoration and buzzy vibe this felt more like a Soho House/Pig hotel type place, modern and fun (the tables had great little cabaret-style lamps which I loved) but even this had a traditional undertone, with a minstrels’ gallery and traditional wood paneling. 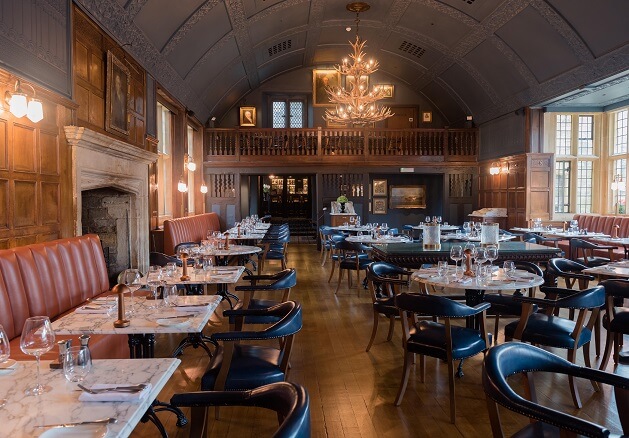 Dinner at The Lygon Arms

We started off our evening at The Lygon Arms with an excellent ‘Taylor Burton Affair’ cocktail in the ultra-cool cocktail bar at the end of the restaurant (it’s tucked underneath the minstrels’ gallery in the picture above) – a mix of Cotswolds’ gin, violet liqueur, lemon and sugar in honour of the hotel’s A-list guests – before being seated in the main dining area which was already packed with diners.

The menu was large but clearly laid out; a good mix of light bites, starters, salads, mains, from the grill and desserts. My starter was one of the most delicious I’ve ever had and was practically a reason in itself to make a return trip: a twice-cooked cheese souffle which was absolute heaven. 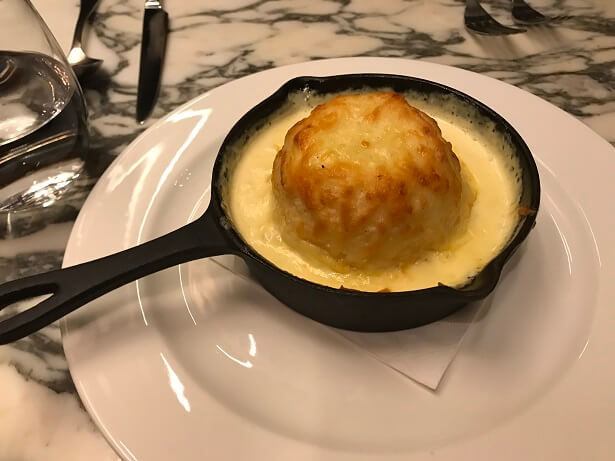 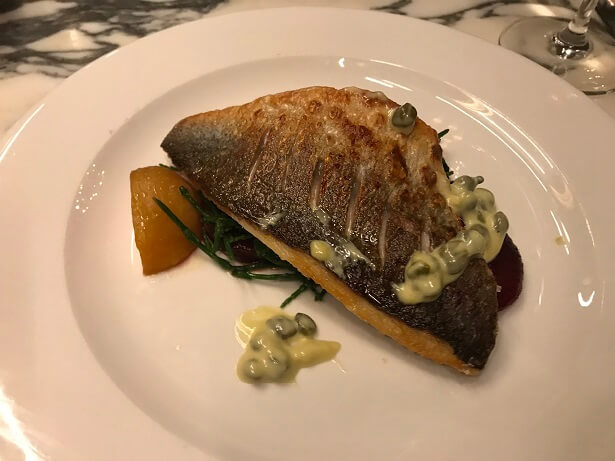 We both went for fish for our main courses: an classic ale battered fish and chips and the catch of the day which was skate wing and both were excellently done. There was a good range of classic desserts on offer, ranging from Bakewell tart to seasonal crumble, but as my choice of Elderflower marinated strawberries weren’t available so the chef kindly whipped up a massive fruit salad instead.

The spa at The Lygon Arms

Resisting the temptation to head back to the bar for some more cocktails, I had an early night and was rewarded with the energy for an early-morning swim the following morning. In the empty swimming pool all my own I felt like an A-lister myself and breezed into breakfast with the smugness of someone who’s already done some exercise (even though I spent most of the time lounging in the hot tub). 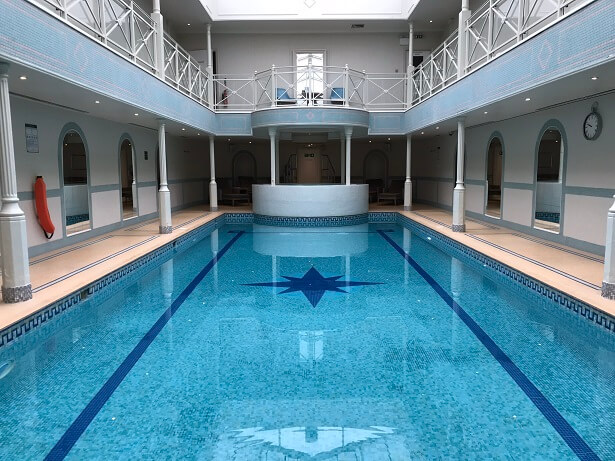 I had the indoor pool at The Lygon Arms all today myself..

Breakfast was a sociable affair with conversations between fellow guests being struck up over the buffet, and the cooked option (Eggs Benedict) arrived promptly and were perfectly done. 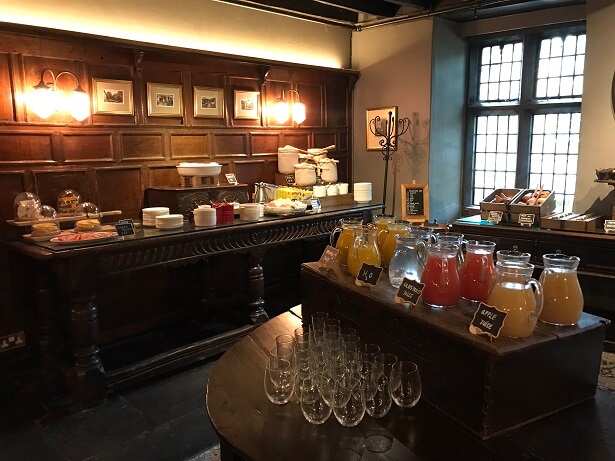 The buffet which was just outside the main restaurant. I grabbed a rare moment when it wasn’t full of people nattering away to each other

My only final ‘task’ was to head back to the spa and enjoy an hour-long massage and then I practically floated back to the room to reluctantly pack. However even once checked out there were more delights to a stay at The Lygon Arms: a visit to the Gordon Russell museum which was less than a minute away and was a real treat to visit. 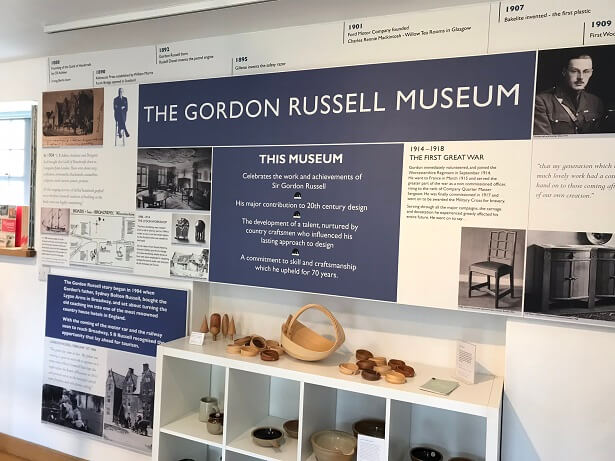 Those with even just a passing interest in design will find this museum fascinating and it’s definitely worth a visit, with friendly and informative volunteers as well.

Gordon Russell’s father used to own The Lygon Arms in the 1900s and Russell himself would restore antique furniture for the hotel in a loft above the coach house. He would go onto become one of Britain’s leading furniture designers, famed especially for his affordable and practical war-time ‘utility furniture’. It’s definitely not to be missed if you’re in the area – and if you’re lucky enough to be staying at The Lygon Arms it’s a perfect way to start or end your stay.

Hotel information and book at The Lygon Arms

Book The Lygon Arms at Booking.com

Visit The Lygon Arms on Tripadvisor