There are many reasons to spend Christmas at a luxury hotel rather than at home, but you still want it to be special, personal and memorable. Thankfully for us (my mother and me), our festive stay at Ockenden Manor hotel in the village of Cuckfield, West Sussex, was all three.

Due to half of our family choosing to follow the sun and spend Christmas in Australia and it being only just over a year since my father died, neither my mum nor myself particularly wanted to spend Christmas at either of our homes, but it would have felt equally strange not to spend it together. A hotel stay seemed the ideal solution and a spa hotel even better, in case the weather was rubbish and we were stuck indoors. I’d stayed at Ockenden Manor several years ago as one of my first reviews for ALadyofLeisure.com and really liked it – but would my mum? The pressure was on. 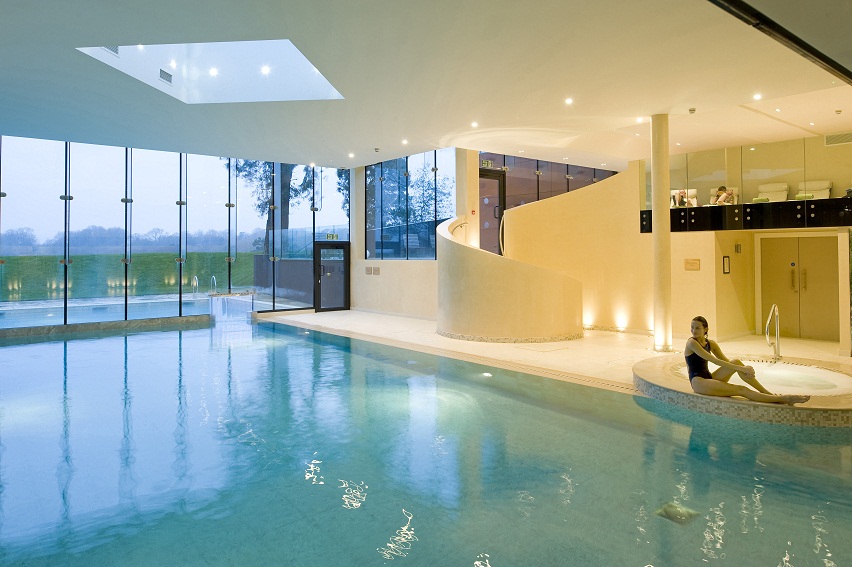 The spa at Ockenden Manor is a very modern and luxurious part of the hotel, with indoor and outdoor pools and outdoor hot tub, loungers, treatment rooms and nice touches such as free Nespresso coffee and hot steamed milk

I’m delighted to report that from the start it could not have been better (which is just as well, as it certainly wasn’t cheap, although their three-night Christmas package was a lot cheaper than at many comparable hotels). Ockenden Manor is very easy to get to from London or the South Coast, being just a few miles from the M23, and it’s tucked down a little lane just off Cuckfield High Street, so while it doesn’t have the vast grounds of some other hotels, it was really easy for us to pop into the village for a walk, to the shops or to the local church for Christmas Day. 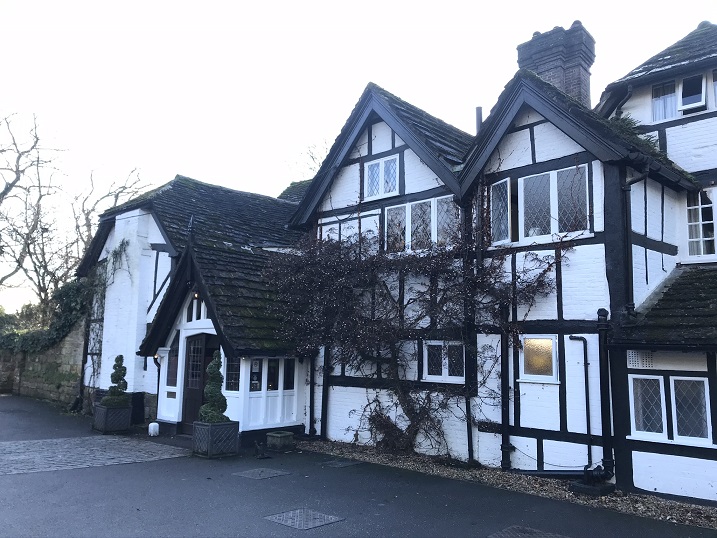 Ockenden Manor is surrounded by fields so there’s plenty of opportunities for bracing walks too, but our first destination was the spa building which is slightly separate from the main hotel building. This contains the pools (indoor and outdoor) plus treatment rooms, gym, hot tub, loungers and changing rooms and there are six Junior Suite Rooms here above the pool, one of which was ours. I’d chosen a room here because they are generally bigger and newer than in the main building, but another benefit was feeling very tucked away in a little private enclave over Christmas: we never heard or saw our fellow guests and the spa was just a steps away in our lovely fluffy towelling robes.

Our bedroom was vast, elongated at one end by French windows leading out onto our own private balcony (perfect in the summertime) and by the bathroom at the other which could be open (so you could chat while putting make up on etc) or closed with shutter for privacy. 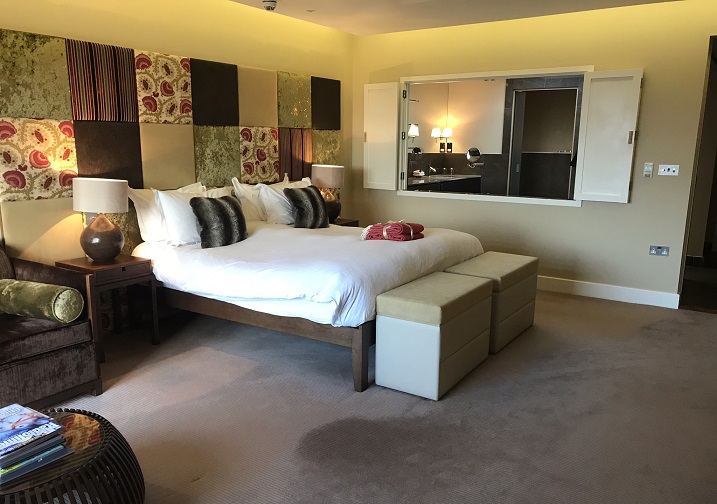 This is the view of the bedroom leading into the bathroom – beyond the shutters there was a free-standing bath, twin sinks, loo, walk-in shower and lots of toiletries, towels, robes and slippers

There was a free-standing bath, separate walk-in shower, lots of towels and toiletries and in the main room was a fridge, kettle, Nespresso machine, amble storage, desk, chairs, sofa and vast TV – basically everything you could want for a three-night stay (expect maybe more mirrors would have been useful). 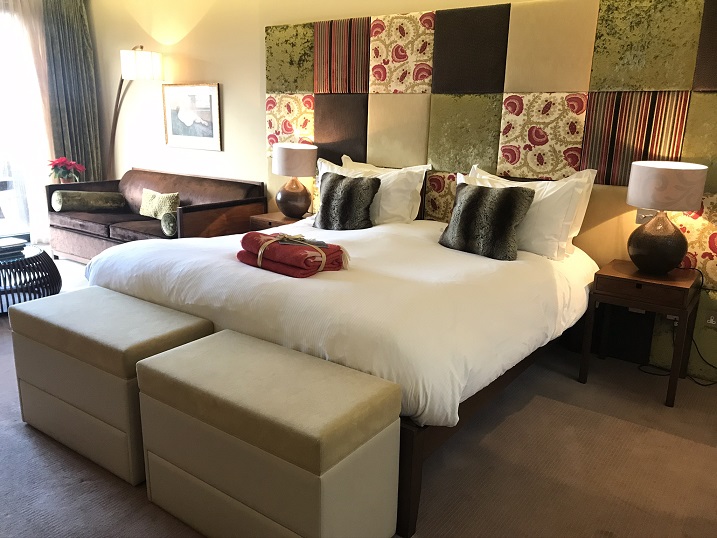 Our bedroom (pictured from the other angle) was a Junior Spa Suite, located just above the spa itself. It was vast and had everything you could wish for in a hotel room, from storage to sofas, luxury bathroom, Nespresso machine and good lighting

There was even a Christmas present of a reindeer blanket wrapped up for us on the bed. It was extremely tempting to stay put for the entire stay in our cosy room, playing Christmas games, watching TV and ambling up and down to the spa, but we had a schedule to stick to – literally. 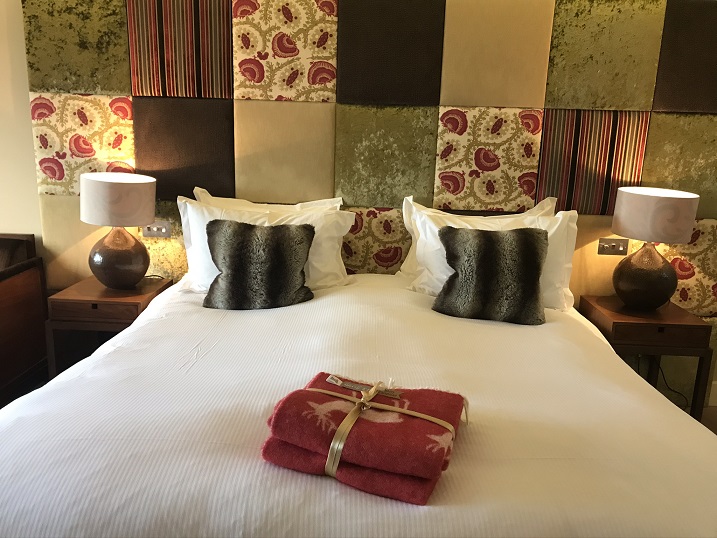 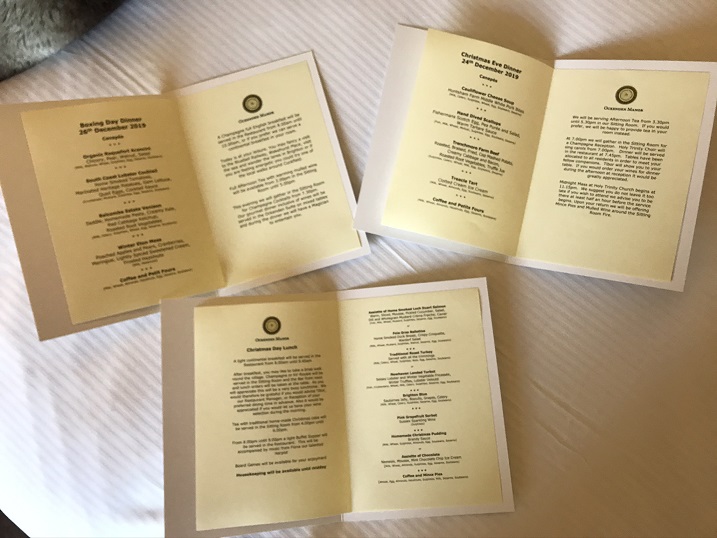 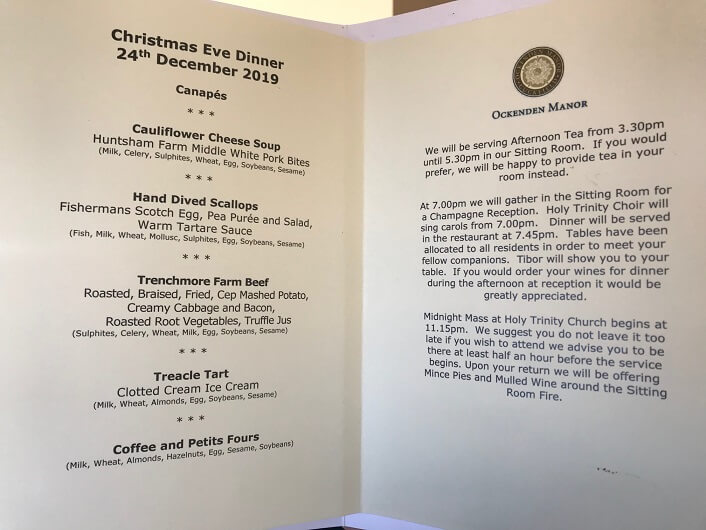 Our schedule for Christmas Eve at Ockenden Manor

We arrived at around 2pm and having unloaded a million bags from our cars (there is ample car-parking space at both the main hotel and the spa building) and enjoyed some festive chocolates while checking in, it was time for afternoon tea in the main building, although you could request to be served in your room instead. We enjoyed seeing who else we were going to spend the festive period with and settled down in the hotel’s cosy bar having helped ourselves to tea, scones, jam and clotted cream (staff were on hand to keep everything topped up). 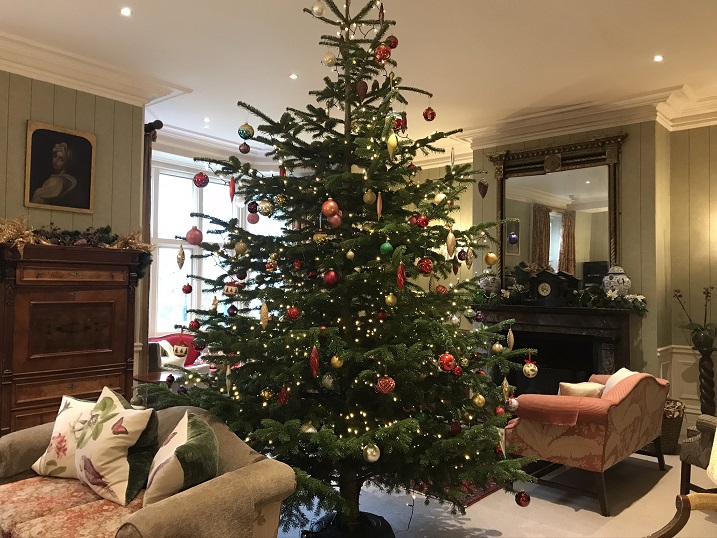 We also met general manager Adam Smith who was zooming around doing everything from taking coats to distributing tea and he was a constant presence throughout our stay, making sure everything ran smoothly. There were real fires in every room and festive decorations throughout, making it feel very Christmassy. The festive feeling only escalated in the evening, with the arrival of the choir from the Holy Trinity church nearby to sing carols (guests could join in) while generous glasses of sparkling wine were served all round. 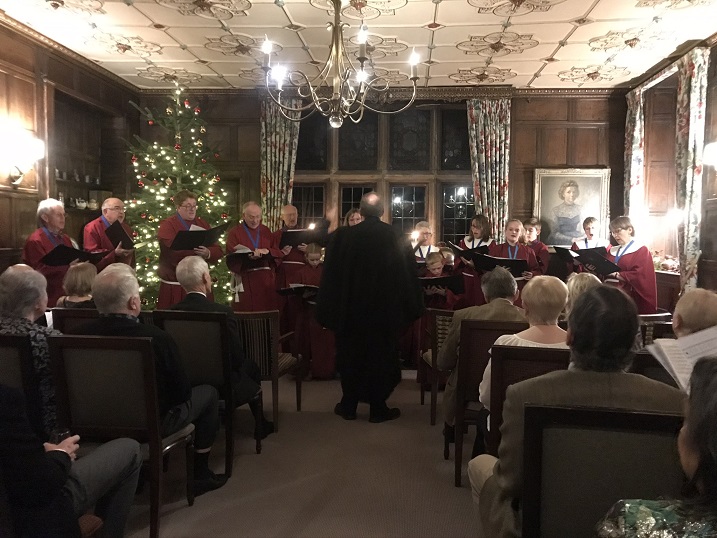 We were then all invited into the restaurant for a five-course meal (wine was extra on all dinners except Boxing Day) and we were all seated on sharing tables which meant we got to chat to our fellow guests too. Most people were in couples while some were sharing with friends and there were a few larger family parties too. Everyone was very friendly, the food was excellent – scallops, beefs and treacle tarts, with canapes and petits fours, and had it not been for sudden sleepiness then we might have even made it to Midnight Mass followed by mince pies and mulled wine. As it was, we were asleep by 10pm – such lightweights! 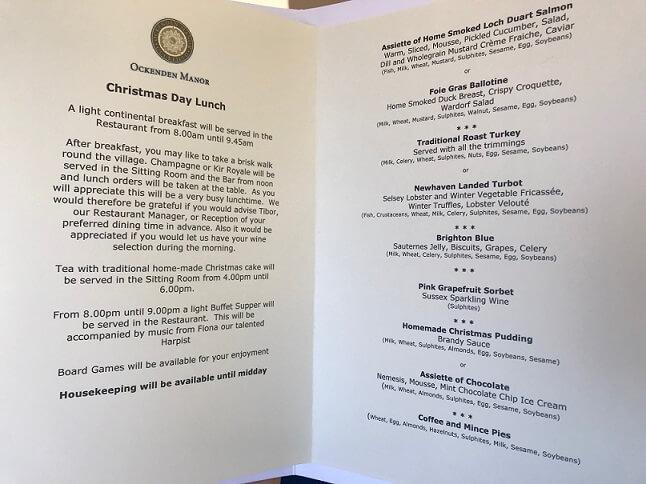 Our schedule for Christmas Day at Ockenden Manor

Sensibly there was a light continental buffet on offer on Christmas Day morning to leave room for lunch, and staff all seemed incredibly cheerful considering they were working. The spa closed in the afternoon but people could swim and sauna in the morning if they wished, which was very civilised; we walked to church for an excellent service and ambled back through the village on a crisp and clear Christmas Day morning. 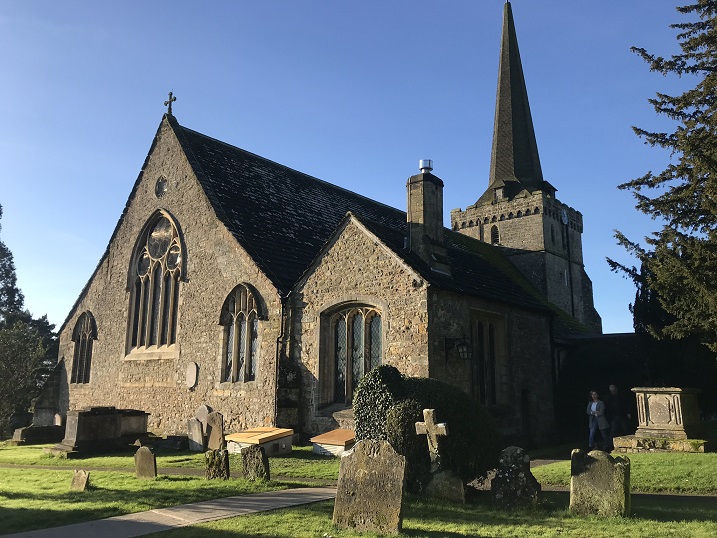 More Champagne was offered before lunch and the meal itself was served on individual tables – a nice touch for the big day – and you could choose when you wanted to dine which meant there wasn’t a massive crush into the dining room. 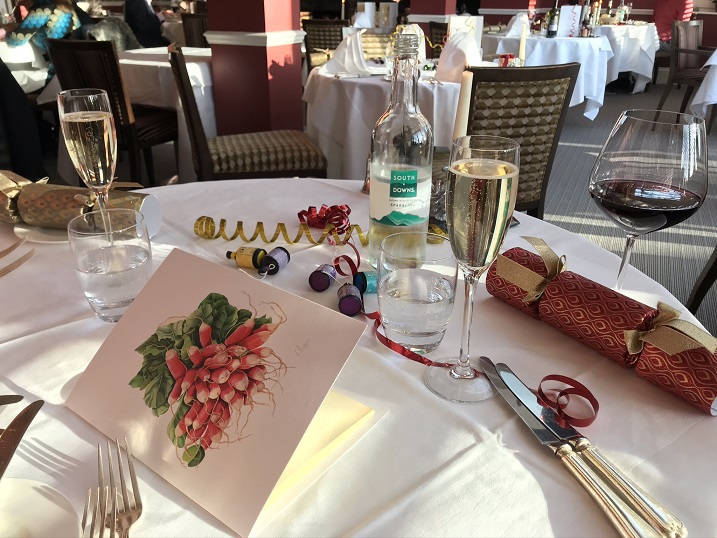 Our table was set for Christmas lunch at Ockenden Manor

We started with smoked salmon followed by turkey with all the trimmings – sadly it was turkey roll, which I supposed is to be expected when catering for so many people, but it was very moist and delicious – and then cheese, sorbet, Christmas pudding and coffee and mince pies. We were certainly not going to go hungry during our stay! 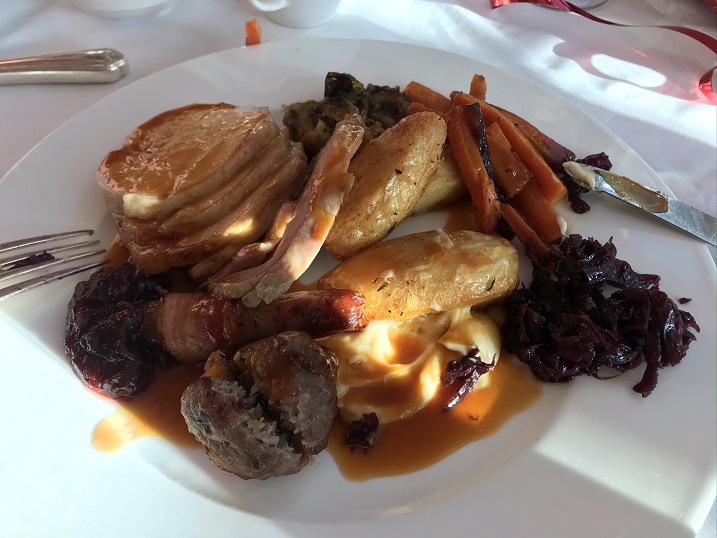 Christmas lunch at Ockenden Manor with all the trimmings

We were still full at 4pm when afternoon tea with Christmas cake was served so we skipped that and were in two minds about making it to the light buffet that evening but I was really glad I had: the salads and baked potatoes were just what I wanted and we were treated to beautiful music by harpist Fiona Hosford – everything from Christmas carols to Harry Potter. Time for Gavin and Stacey’s Christmas special and then bed. 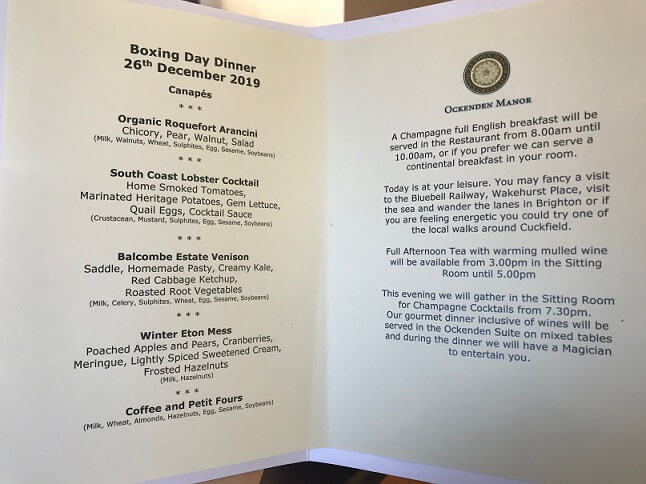 Our schedule for Boxing Day at Ockenden Manor

As if we hadn’t eaten enough already we woke up to a full English breakfast with unlimited sparkling wine (we made Bucks Fizz) and then retreated back to our lovely spa to hit the loungers. Surprisingly, the spa was never even slightly full over the break so there was no worry about finding free loungers or space in the pool. 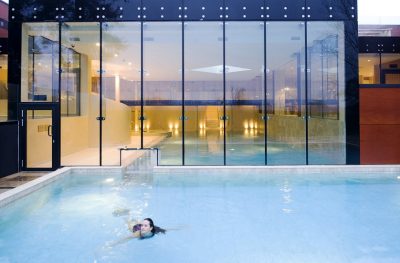 The spa at Ockenden Manor was surprisingly empty on Boxing Day

In the afternoon I even made it out for a lengthy walk around the surrounding countryside and was very impressed by the folder of walks at reception, meaning you could choose a time or distance and then take a map and directions out with you.

There was more afternoon tea and mulled wine in the afternoon and in the evening we all gathered in the lounge for one final get-together, served Champagne cocktails and then a gourmet dinner – Roquefort arancini, lobster cocktail, venison and Eton mess – with the added entertainment of a magician roaming the tables and performing close-handed tricks which none of us could work out.

It was with a great deal of reluctance that we packed up after one final breakfast and one last trip to the spa. We’d made ourselves thoroughly at home during the previous four days, been excellently looked after and had exactly the type of relaxing, festive house-party hotel stay we’d been hoping for. The service had been excellent, with housekeeping even coming round on Christmas Day evening to make sure we had fresh towels, and staff being efficient and friendly throughout. In conclusion, while it’s certainly not the cheapest way to spend Christmas, we certainly got a lot for our money and even better, we had exactly the memorable Christmas we’d wanted. And best of all, no washing up!

Did you stay in a hotel over Christmas? How was it for you? Do let me know in the comments.

And if you’re thinking of doing something similar next year, then read my epic round-up of what the very best luxury country house hotels Christmas breaks

Cost of Christmas 2019: From £1,025 per person for the three-night stay including all meals and spa access.