Getting to Thurlestone hotel Devon is like going down Alice in Wonderland’s rabbit hole. You follow one of those high-hedged, single-track south Devon lanes, praying not to meet any oncoming tractors, until, half an hour later, you pop up into the open air once again and think: ‘Where on earth am I?’ 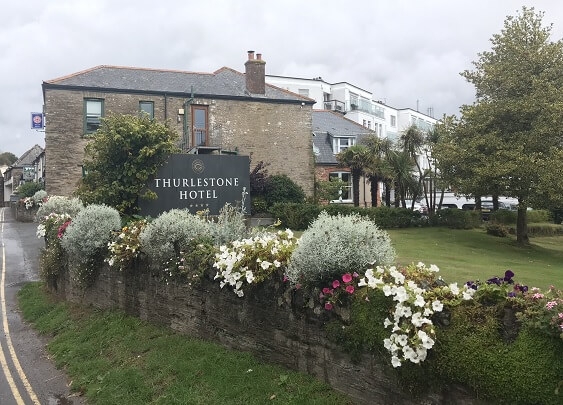 After the narrow south Devon lanes, Thurlestone hotel comes as a welcome sight

Thankfully the views from the four-star hotel at Thurlestone hotel Devon will soon have you back on track, facing as it does across the English Channel and giving sweeping views all the way along the Devon coastline. 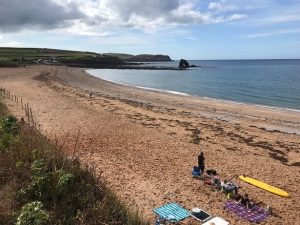 The beach at Thurlestone, south Devon, which is just below the Thurlestone hotel

The village of Thurlestone is small but pretty, with an imposing church, handy shop and village pub (which is owned by the hotel) but the main feature in the village is the hotel itself.

Set in 19 acres, the 65-bedroom hotel has been in the Grose family since 1896 and certainly feels traditional: the kind of place Agatha Christie could have stayed at in the 1930s. 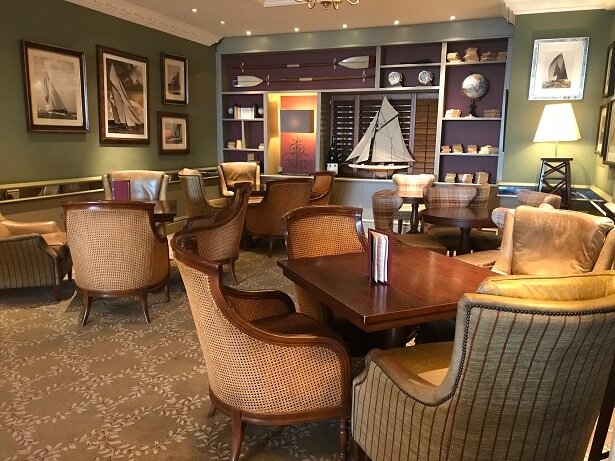 The lounge area at Thurlestone hotel has a nautical theme

What to do at Thurlestone hotel Devon

This is not a place for guests looking for boutique chic and a lively vibe, but if you want to stay put for a few days, a week even, in a cosy, relaxing, comfortable hotel which has ample sofas and lounges for afternoon tea or even a snooze then this is the place for you.

That’s not to say it’s dull: there’s an excellent contemporary restaurant, a stunning outdoor art deco pool as well as an indoor pool plus spa, a golf course, tennis courts and excellent children’s play facilities (multi-generational holidays are popular here) so you won’t be short of things to do. However the point is you won’t be made to feel bad if you don’t feel like doing anything at all but curl up with a book or just enjoy the views.

As you’d expect from a hotel on the clifftops, the views are a big draw here and within seconds of entering my large, third-floor bedroom, I was outside on my balcony and drinking up as much of south Devon as I could.

Once I could tear myself away from the views which stretched all the way along the south Devon coast in the glorious sunshine, I explored the rest of the bedroom with had a separate lounge and large, modern bathroom. 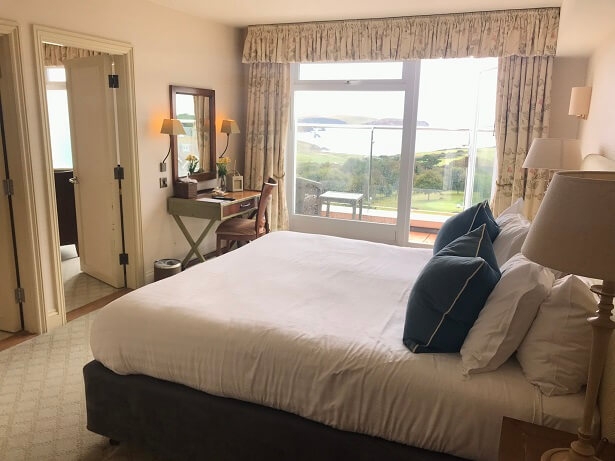 My bedroom at Thurlestone hotel was on the third floor and was large and airy, with a separate lounge off to one side and great views of the coast (which can be glimpsed through the door to my private balcony)

My bathroom was large and smart 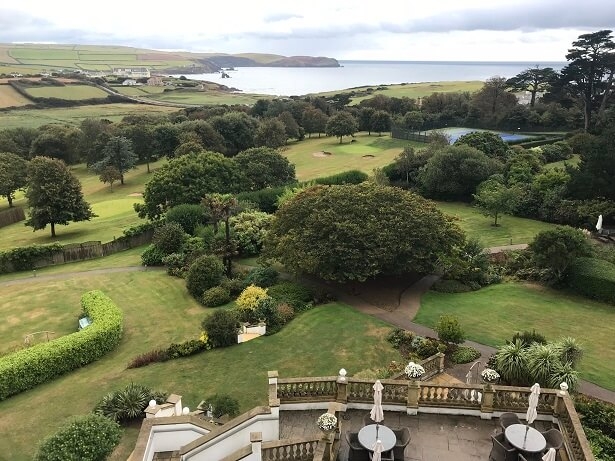 The view from my bedroom balcony

The sun obligingly came out and prompted the taking of dozens of photos (none of which do the view justice) and it was only when it disappeared behind a cloud that I could tear myself away to the spa.

The indoor pool was warm and welcoming (there’s also a steam room and a spa) and there are several treatment rooms too. 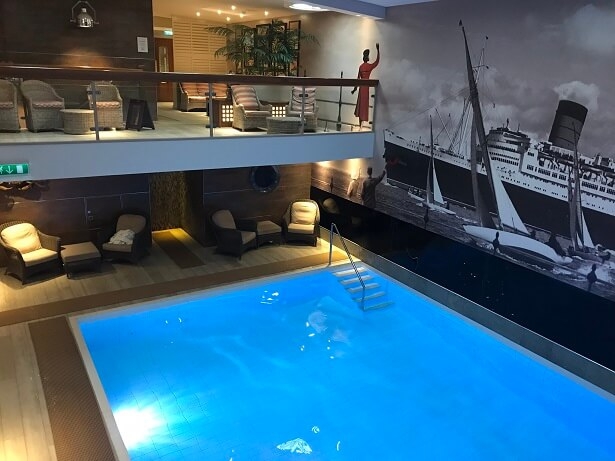 The indoor swimming pool in the Voyage Spa at Thurlestone hotel. There are also treatment rooms as well as sauna and steam rooms (and lots of loungers all around) 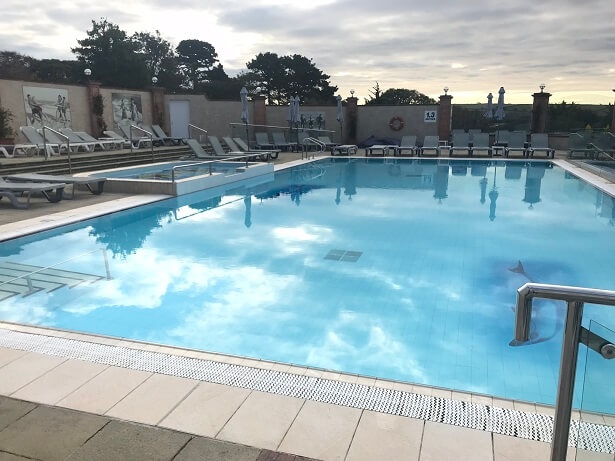 It felt like the afternoon to get out and explore however, so I donned my wellies and headed off to visit the local church (where Mary Grose, Thurlstone hotel’s business development manager and member of the owning Grose family recently got married) and to have a good old hike around the neighbourhood.

Returning in search of a drink I ended up at the hotel bar and enjoyed a half of local ale before heading to the Trevilder restaurant. 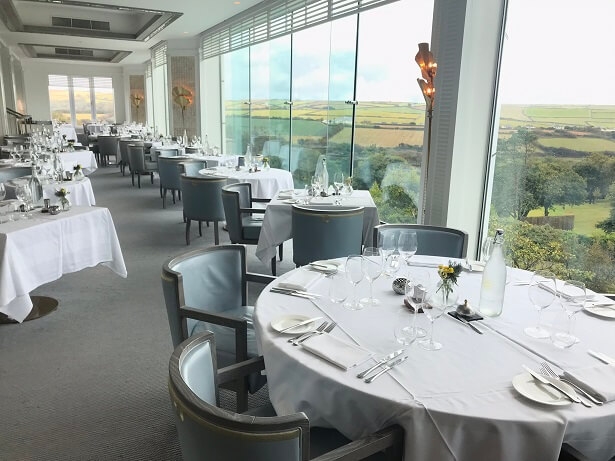 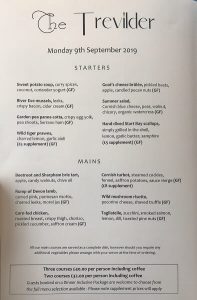 The menu at The Trevilder restaurant

Recently refurbished, this was the most modern part of Thurlestone hotel and its vast picture windows showed off a great sunset and would yield excellent views the following morning over breakfast.

For now I was happy to explore the well-chosen menu which offered a wide range of dishes with local ingredients and suppliers (who were listed in the menu which I always like).

I started with Start Bay scallops grilled and presented in a shell with lemon, garlic butter and samphire,  and continued with rump of Devon lamb, carved pink with parmesan risotto and charred leeks. Both were excellent as was the red wine recommended by our waitress.

My starter of hand-dived Start Bay scallops with samphire and lemon, served in a scallop shell 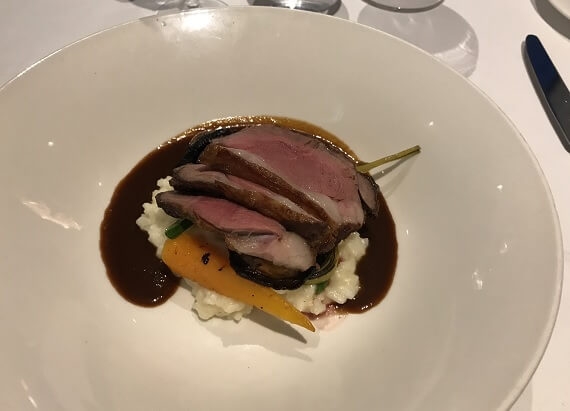 The lamb with parmesan risotto was an excellent main course

The meal ended on a high note of an excellent cheese board which offered a great choice local and British cheeses with apple jelly, crackers, celery and chutney.

The portions were very generous but I loved sampling them all, (particularly the Helford Blue and the Driftwood goats cheese) and I staggered off to bed convincing myself of the merits of an early-morning swim in the outdoor pool the next day.

The cheese board at Thurlestone hotel was excellent

Predictably I enjoyed sleeping too much to make it for a swim but I popped down before breakfast to find a few hardy souls taking a dip and looking invigorated. I indulged myself instead with a massive breakfast – I resisted the waffle maker but still made inroads into the wide selection of cereals, pastries, bread, cooked options and fresh juice – and made up for it with a massive hike along the South West Coastal Path towards Cornwall. 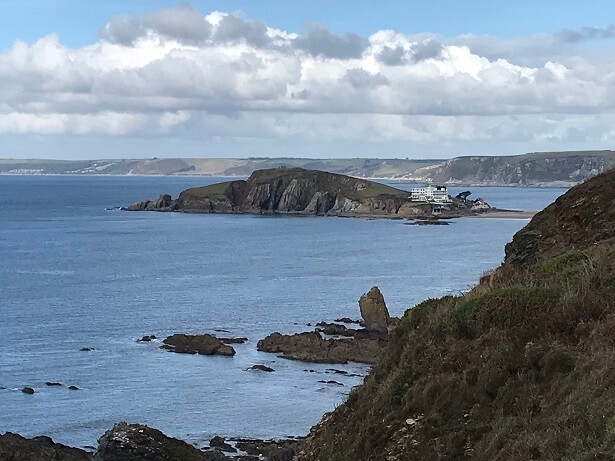 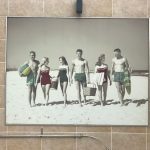 A picture of bathers from yesteryear next to the outdoor pool

The clifftop path is just a few minutes from Thurlestone hotel through the golf course, and – having been thinking of Agatha Christie earlier – goes directly to Burgh Island and its famous art deco hotel which  supposedly inspired several of her novels and where Noel Coward visited, supposedly for three days and ended up staying three weeks. That seems to be the charm of a hotel on the south Devon coast – time just gets away from you.

Rooms at Thurlestone hotel cost from £155 bed and breakfast for an inland view room off-peak, while a deluxe sea view bedroom (such as the one I had) in the peak summer season can start from around £485 bed and breakfast.

Thurlestone Hotel is a member of the Pride of Britain Hotels group, a collection of no more than 50 of the UK’s loveliest luxury hotels.

If you liked this seaside hotel review, then you’ll love these top hotels by the sea: A romantic seaside stay in the beach suites at Cary Arms hotel and spa, south Devon; A luxurious country escape at Bailiffscourt hotel and spa, West Sussex; A seaside stay right on the Suffolk coast at The Brudenell hotel, Aldeburgh, Suffolk; Luxury from treehouse to spa at Chewton Glen in the New Forest; A luxury West Sussex escape at Bailiffscourt hotel and spa;