Home / Hotel reviews / Montcalm at the Brewery and The Jugged Hare: a hotel with history

The joy of reviewing hotels and restaurants is that with every new visit there is often something which will surprise, delight or even shock you. The Montcalm at the Brewery hotel in Chiswell Street in central London and its adjoining gastro-pub, the Jugged Hare, managed the hat-trick and did all three.

A stay at the five-star Montcalm at the Brewery hotel

A hint that it was going to be an unusual experience was found straightaway in the hotel reception. I had arrived from the pouring rain, only to discover it was raining indoors too – water cascades endlessly down one wall of exposed brick inside the entrance hall. (‘Imagine having to work listening to that all day long!’ sighed the receptionist.) 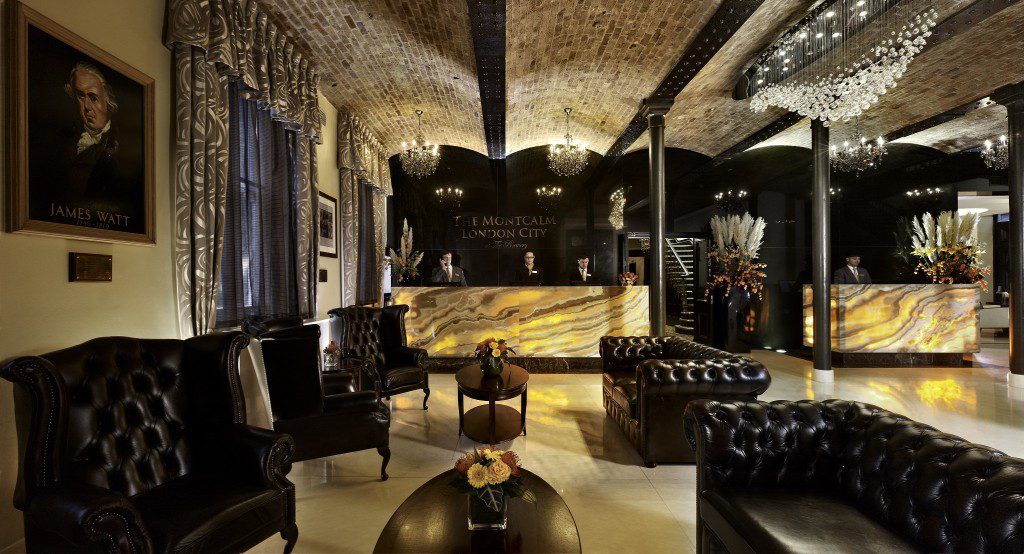 The reception at Montcalm at the Brewery. Sadly the watery wall is just out of shot

Thankfully such modern touches haven’t come at the expense of the historical nature of the building which dates back to 1750, when Whitbread started brewing beer on the site. The Whitbread clock is still ticking away in the courtyard, and next to the check-in desk was a plaque showing that HM The Queen and the Queen Mother had visited the brewery in 1962. The man registering next to me had his tiny baby in a sling: ‘His great-grandfather used to work here,’ he said proudly.

Whitbread stopped brewing here in 1976 but continued to use the site as its head office, even holding the Whitbread (now Costa) Book Awards here, so every year I’d trot up to mingle with the likes of Hugh Grant and Mariella Frostrup. However Whitbread sold the site in 2010 and the old buildings have been imaginatively transformed into a 235-room five-star hotel, which due to its unusual rabbit-warren of buildings, feels a lot more cosy and intimate than the large number of rooms would suggest, and far from the soulless, business-traveller-type hotel I had been expecting.

Bedrooms at Montcalm at the Brewery

My room was on the second floor and hotel employee Adrian was tasked with showing me up. As we stood in the lift, he asked me out of the blue: ‘Are you prepared to say ‘wow’?’ I looked around rather nervously. It was a rather ordinary lift. What was going to happen?

As if to emphasise the point, my room, number 228, had a massive sign on the door reading ‘The WOW suite’. I could take a hint. Thankfully I was actually rather impressed – my room had a four-poster bed in it, a first for me. It looked vast and extremely comfortable and I conceded to Adrian that it did indeed, have the ‘wow’ factor he was so keen on. 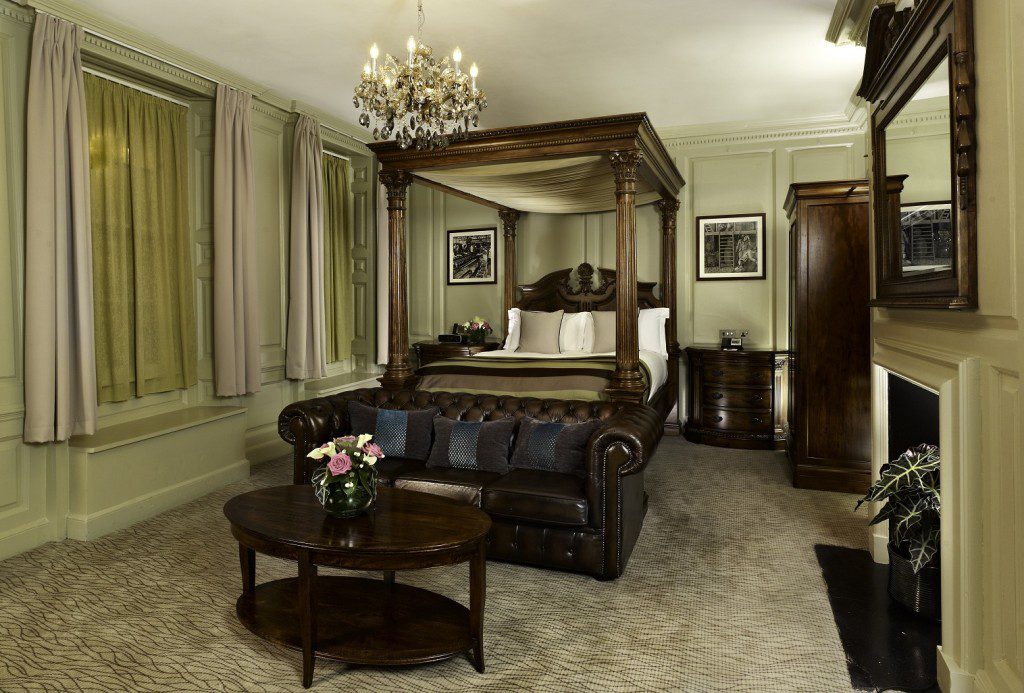 It’s a four-poster bed, and yes, it will make you go ‘wow’ when you see it

Encouraged by my response, he went into a frenzy of showing me every aspect of the room, from the light switches to the kettle – ‘You fill it up with water and then switch it on,’ he said helpfully – but also pointed out some of the more quirky aspects to the room, one of which was an ‘aroma box’ which sat on the writing desk and puffed out little bursts of fragrant steam every now and then.

The interior wall between the bedroom and the bathroom was another – at the flick of a switch the wall would disappear, meaning you could sit in the bath (or on the loo) and wave at people in the bedroom, should you wish. In the bedroom itself there was a sofa and coffee table, a dark fitted wardrobe containing fundamentals of hotel life such as a hair-dryer, espresso machine and a mini-bar.

There was an antique-looking chest of drawers and, barring the ironing board rather incongruously propped up in one corner, the whole room looked extremely smart. There was a really well-written and thorough guide to the hotel and the surrounding area, including extensive listings of nearby pubs, restaurants, places of interest and even an ingenious jogging map which had two circular routes starting at the hotel on a lanyard so you could just head off without any fuss. 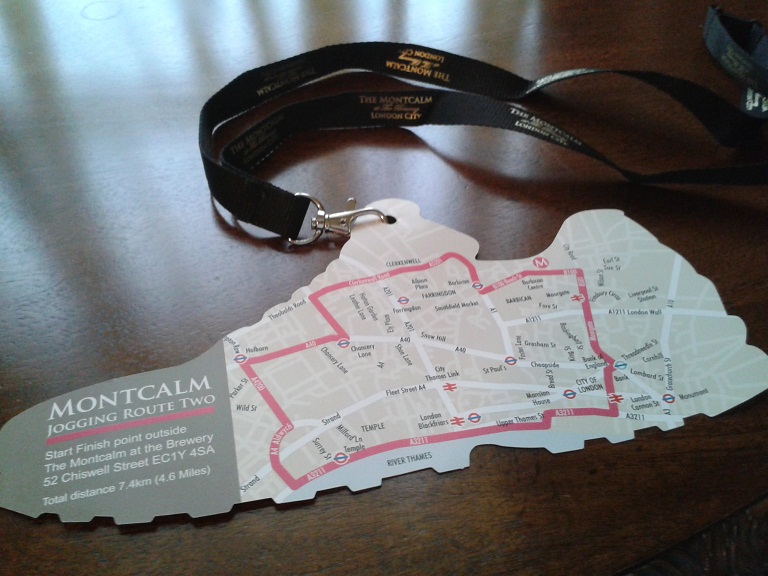 The ingenious little jogging map which you wear while you run

And another first for me, and a great idea in an industry where no self-respecting hotel shower has anything less than a dozen knobs and jets and seventeen settings, was a laminated guide attached to the shower showing what button did what. I thought it was inspired and stopped me spending my usual half an hour pressing buttons at random and drenching the bathroom.

Exploring Montcalm at the Brewery facilities

Once I had dragged myself away from investigating my room, I found the steam room, sauna and gym at the bottom of the building – all quite tiny, but perfectly adequate and best of all, open 24 hours a day so you could combat jet-lag by working out or detoxing at the dead of night if you wished – and then made my way to the Club Room.

Guests staying in the more expensive rooms had free access to the room which served sandwiches, canapes and drinks in the afternoons and I was served a gin and tonic so strong I had to go back for more tonic, another first. 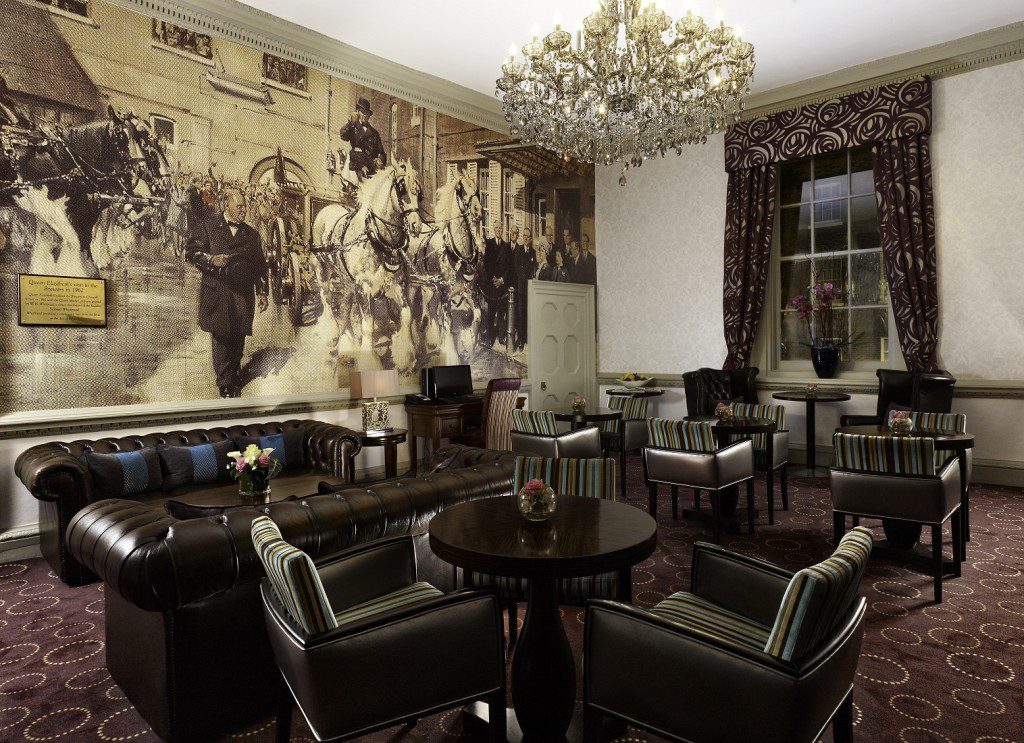 The Club Room, where guests in superior rooms get to hang out with each other (and enjoy free drinks and sandwiches)

As far as dining goes, the hotel is flanked by the Jugged Hare on one side and the more restaurant-like Chiswell Street Dining Rooms on the other. I was booked in at the Jugged Hare with my friend Lisa so off we went, avoiding the rain by using the connecting corridor from the hotel.

Dinner at the Jugged Hare restaurant

We quickly realised that this was no place for vegetarians or the squeamish: there must have been two dozen dead, stuffed animals adorning the place, from pigeons and hares strung up in the windows to game birds in glass cases behind the bar, to a whole gallery of hares heads decorating the entrance to the dining area, staring reproachfully at us as we apologetically made our way to our table.

Had we not already got the message, the menu would have given the game (sorry) away: starters on the regularly changing menu included spiced duck liver, ‘snails and tails’, blood sausage, ‘whipped pig’ and toast and the gruesome-sounding Tamworth pig’s head cheese and green juice chutney.

The dressed crab, sadly, was unavailable, so I bravely dived in with the pig’s head cheese, which, according to our friendly and extremely knowledgeable waitress Anastasia, was nothing to do with cheese but was basically a pig’s head with the brains and eyes taken out and everything else boiled up and then cooled into a gelatinous goop and then sliced. 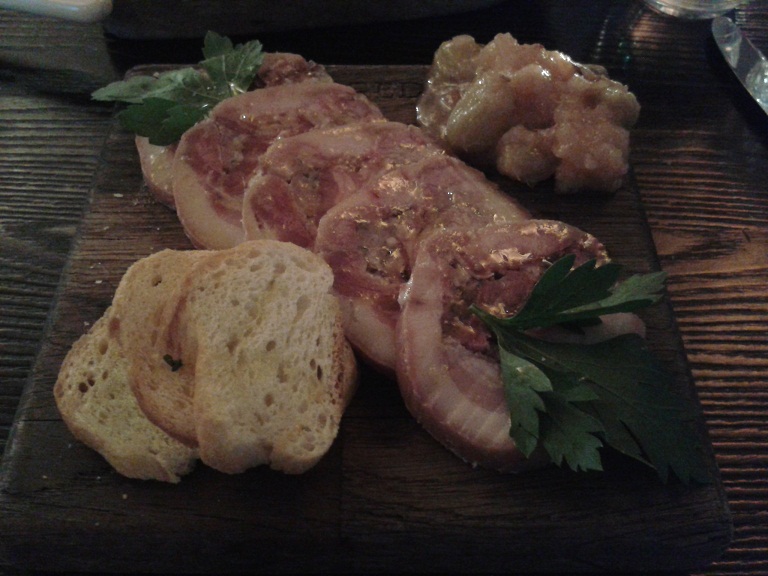 Yes, it’s pig’s head cheese. Although nothing to do with cheese, apparently

After that description I wished I hadn’t asked. However it was, as Anastasia promised it would be, utterly delicious – although I could have done without the chutney – and even more so if I didn’t think too much about what it actually was.

Lisa played safe and went for the cured Scottish salmon, pickled beets and monk’s beard which she said was lovely, and made up for it on the adventurous stakes by going for the wild boar bung, roasted onion puree and spring onion mash for the main course. 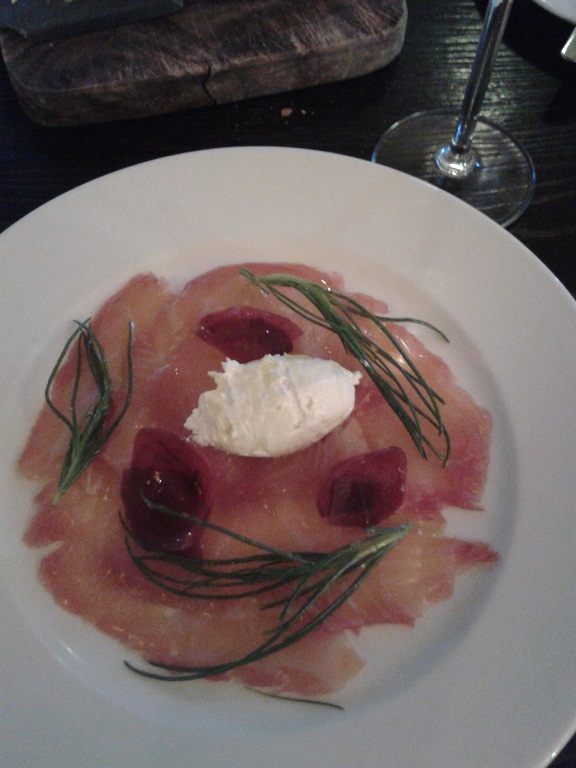 This turned out to be a massive sausage made up of large intestine (or boar bottom, if you want to be completely put off ever trying it) crammed full of boar meat. It was extremely rich, like eating pate, and while tasty was far too much for me to try more than a mouthful. 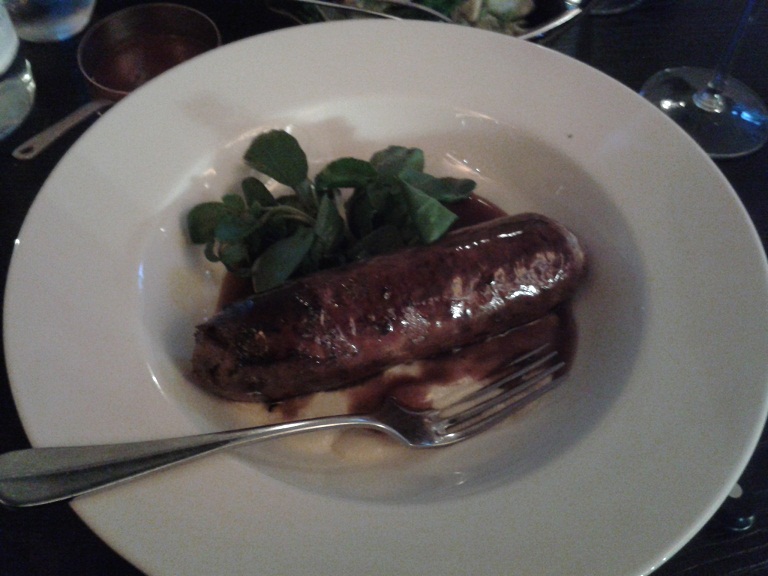 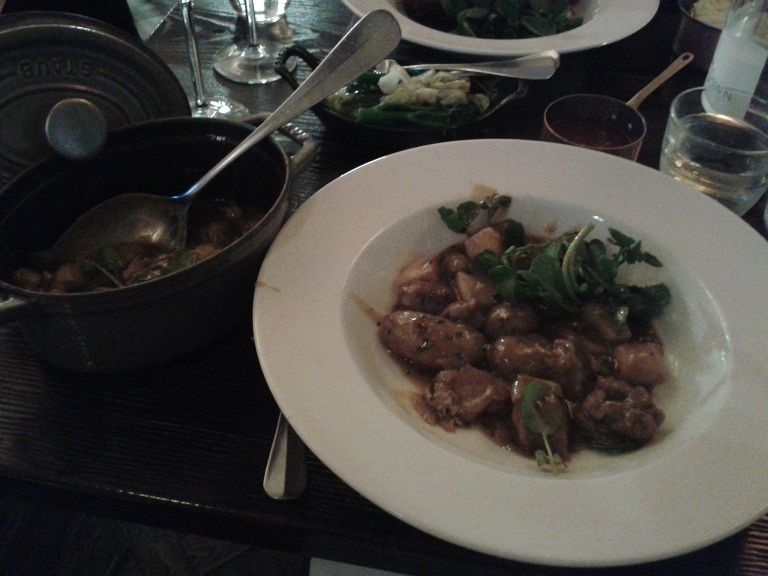 We tried hard but were way too full to make too much of an impression on our desserts, a light and moreish popcorn ice-cream with caramel sauce, and the cheese board which included the fabulously-named Farleigh Wallop (made by Blur’s Alex James) and a deliciously gloopy Wigmore goat’s cheese. 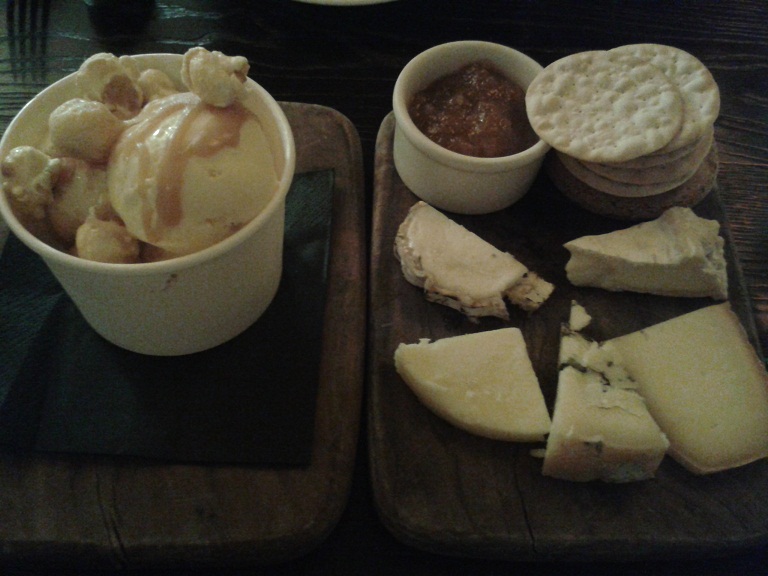 The whole lot was washed down with Anastasia’s recommendations which were spot on – a not-too dry muscadet from the Loire; Cedro do Noval, a spicy Douro Portuguese red which stood up to the bung well (both wines by the carafe) and then a glass each of tawny port and a sweet grenache from Gerard Bertrand of France. This worked out at £150 all in, which isn’t cheap but it was certainly memorable. I braved the gauntlet of accusing eyes from various stuffed creatures on the way back to my four-poster.

Hotel information and book The Montcalm at the Brewery

Book The Montcalm at the Brewery on Booking.com

Visit The Montcalm at the Brewery on Tripadvisor

Editor’s note: This article was originally published in a few years ago but has been edited and updated for accuracy and relevance

If you like reviews of London hotels then check out: A Sherlock-worthy stay at Holmes hotel on Baker Street; A penthouse stay at nhow hotel, east London; Mayfair Townhouse off London’s Piccadilly; A luxurious five-stay at at The Stafford, Mayfair; Disco lights and a budget stay at Point A, Kings Cross; Hyatt Place London City East off Whitechapel street;