There is something gloriously untamed about the British seaside on a blustery day and when I arrived at The Brudenell Hotel Aldeburgh in Suffolk, the hotel building was receiving a severe battering from the elements.

Arriving at The Brudenell

Situated just a few steps from the cobbled beach, the Brudenell is on the very edge of town and felt like the last sanctuary before the wildness of the neighbouring nature reserve and the long uninterrupted stretch of coastline south. 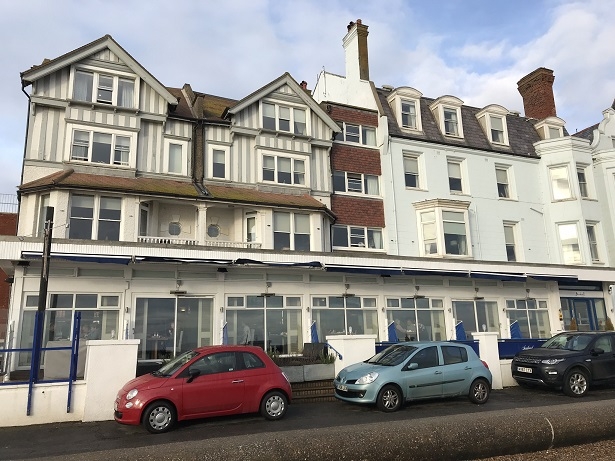 I dived inside for cover and was instantly transformed from a windswept traveller to a calm and serene guest, helped by the friendly reception staff and the happy chatter of people settling in for an afternoon’s relaxing. Being so close to the sea, the 44-bedroom 4-star luxury hotel has been known to flood on occasion, with the waves coming up through the main doors, but thankfully the weather wasn’t that extreme during our visit and people could enjoy coffee in the lounge or stronger stuff in the bar in warmth and comfort.

Bedrooms at The Brudenell

Our bedroom on the second floor was large and overlooked the sea, so if you stood in the bay window you felt as if you were on the top deck of an ocean liner. The style was what you could call modern classic, with nothing particularly memorable about it but with a quiet, unassuming air.

Check out these other great seaside hotels 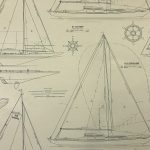 All the essentials were there, such as complimentary bottles of water, coffee-making facilities, a full length mirror and small but smart bathroom, and the double-glazing protected us from the full force of the elements. Most of the rooms face the sea but ones at the back have views too over the town and the river behind, and the corridor wallpaper has a striking maritime theme. 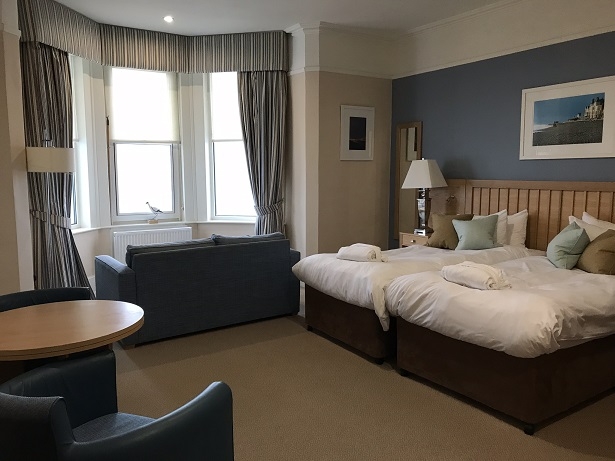 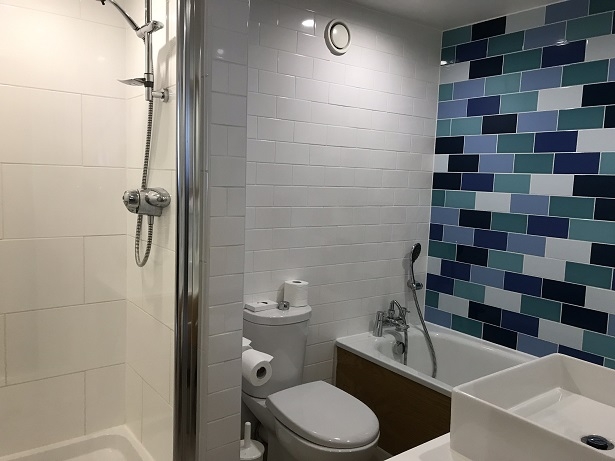 Our bathroom was compact but fitted a lot in

There’s a bit more colour in the suites and there’s even a penthouse suite (room 210, the hotel’s most popular room) with its own private terrace right on the top corner of the building, which will be a lovely suntrap in the summertime. However in summertime, you’ll have the whole beach at your disposal and you couldn’t ask for a hotel nearer the seaside – handy if you leave your sunscreen or bucket and spade in your room. 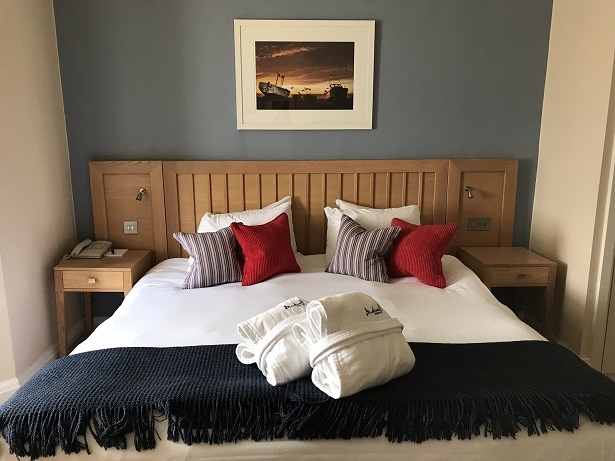 Some of the rooms were colourful suites, with a separate bedroom and lounge area 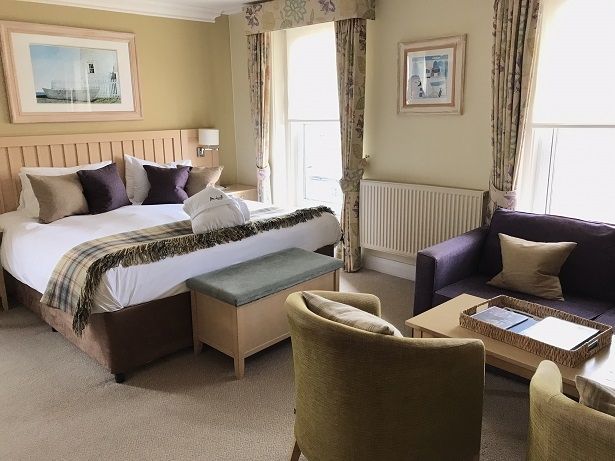 History of The Brudenell and Aldeburgh

If you did come here for a break then you would be following in a long tradition of daytrippers and holidaymakers to Aldeburgh which has been a favourite holiday destination since Victorian times. Back even further, in Tudor times, the town was a bustling port with a thriving ship-building industry – Sir Francis Drake’s ship, The Golden Hind, was built here – and there are still elements of its past in the charming town, with its 16th-century Moot Hall building – where the town council still meet – and half-timbered buildings such as the Aldeburgh cinema. 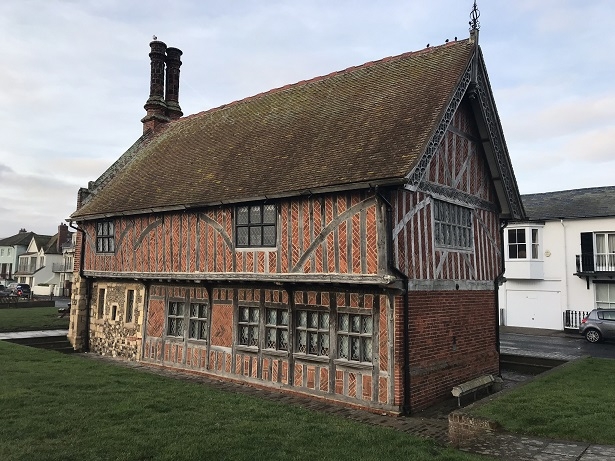 There are many huts along the beach selling fresh fish 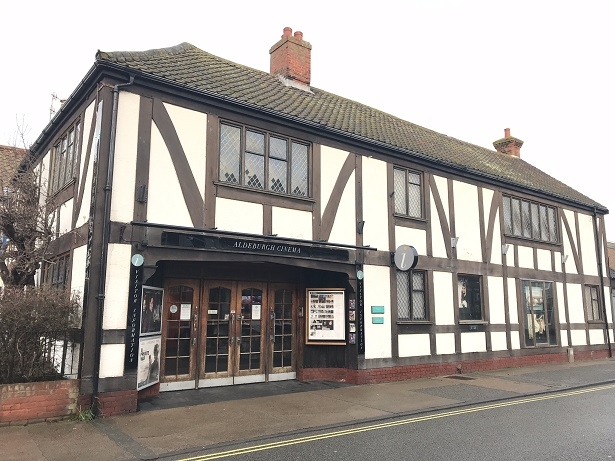 There are plenty of quirky cafes, shops and restaurants which make it perfect for a day’s exploring, and if you stroll along the coast towards Thorpeness you will find the Scallop, a tribute to local resident and noted composer Benjamin Britten by Suffolk sculptor Maggi Hambling. 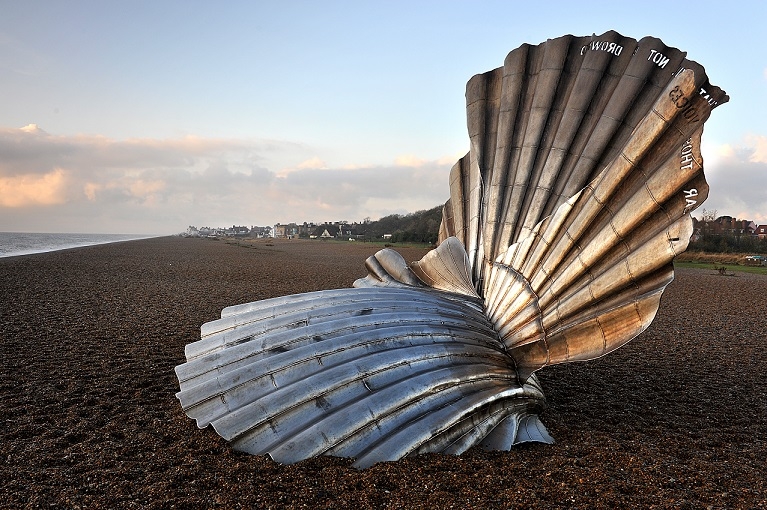 The restaurant at The Brudenell

All that walking can be hungry work and we were more than ready for dinner in The Brudenell’s Seafood & Grill restaurant, which makes the most of its seaside location with its vast windows making sure everyone gets a sea view. Fittingly for a coastal restaurant, the menu focused on local, fresh and sustainably-sourced fish and seafood and seemed to be popular with locals as well as guests which is always a good sign. We started with a meze-style selection of bread and hummous, before embarking on starters of smoked haddock and leek tart and a silky-smooth onion and cheddar cheese veloute. 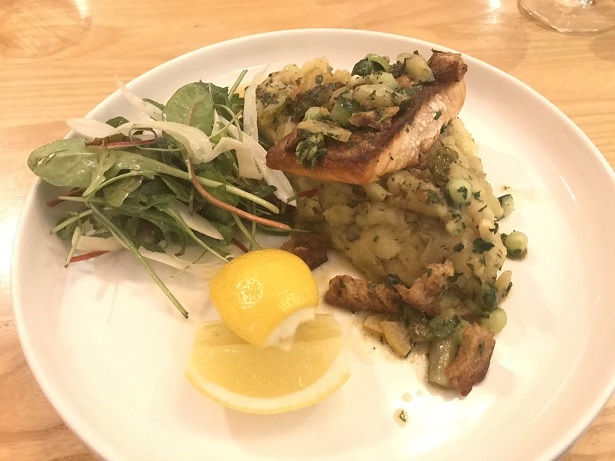 The restaurant at the Brudenell hotel specialises in locally-caught fresh fish, so we went for the pan-fried hake…

The main courses included a catch of the day, battered fish, seared scallop and seafood risotto as well as slow-cooked Navarin lamb, truffle pasta, burger and rib-eye steak, which covered all bases, but we had to go for the fish. Both the Adnams dry hop battered fish with rosemary fries and the pan-fried hake were excellent and worth of its two AA rosettes.

…and the Adnams battered fish and chips

After that, the crepes suzette were a little underwhelming – I think unless you go the whole hog and set fire to it then there’s not much point – but it tasted nice and gave us the chance to linger in the restaurant over coffees before heading upstairs for bed. 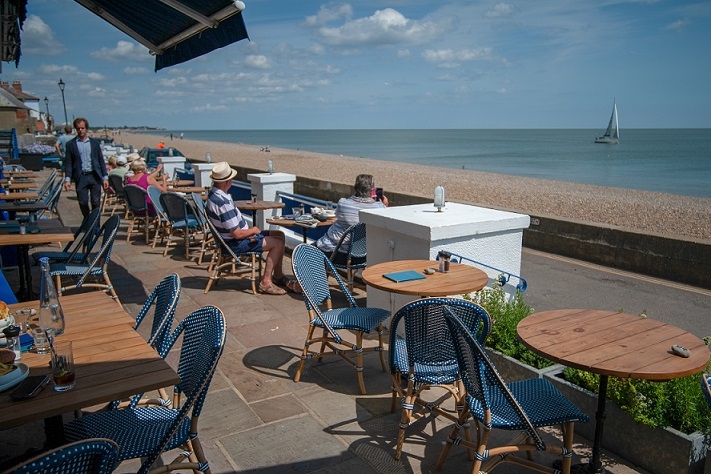 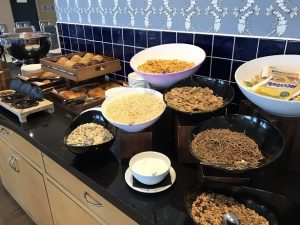 The wide selection of food at breakfast

Breakfast at The Brudenell

Breakfast was equally good the next day – prompt service, good cooked breakfast – and the sun even came out to bathe the coastline in bright spring sunshine. As we sat enjoying our second cups of coffee and soaking up the view, a little grey head popped out of the water, just a few metres from the beach. A seal had come to say hello! A memorable end to a most enjoyable stay. 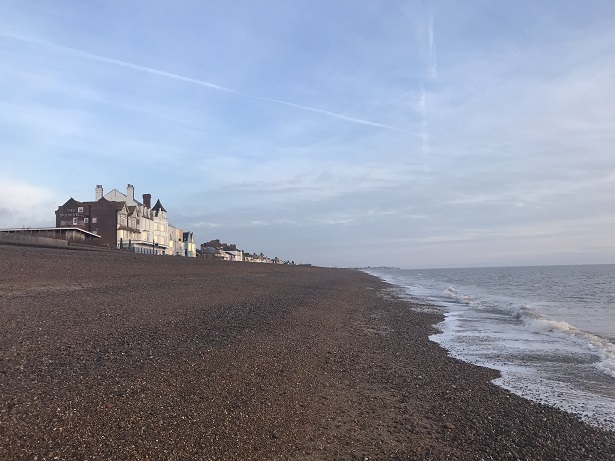 The Brudenell sits right at the very edge of Aldeburgh

Hotel information and to book The Brudenell

The Brudenell, The Parade, Aldeburgh, Suffolk

Check availability and book The Brudenell

Compare latest prices and read more reviews of The Brudenell

The Brudenell hotel is part of the The Hotel Folk group which also includes The Swan at Lavenham and Crown and Castle at Orford.