Returning to The Swan, Lavenham in Suffolk several years after my original stay, I was relieved to find that it was just as lovely as I remembered it. This time it also had the added attraction of its Weavers’ House Spa which had been seamlessly added to the original hotel and included an outdoor hot tub and treatment rooms as well as a steam room, sauna and relaxing conservatory.

If you like your hotels built along traditional lines, with flagstone floors, high-ceilings, open fires and exposed beams then The Swan at Lavenham is for you. This 15th century hotel with 45 luxury bedrooms and suites is simultaneously sprawling but intimate, where exploring down a random corridor can take you to a peaceful inner courtyard, a cosy lounge for afternoon tea, grand meeting rooms lined with tapestries, a casual brasserie, a formal restaurant, the terraced garden or a classic British pub.

The building is almost Tardis-like in its ability to expand space and means you will always be able to find your own space, even in its busiest periods. 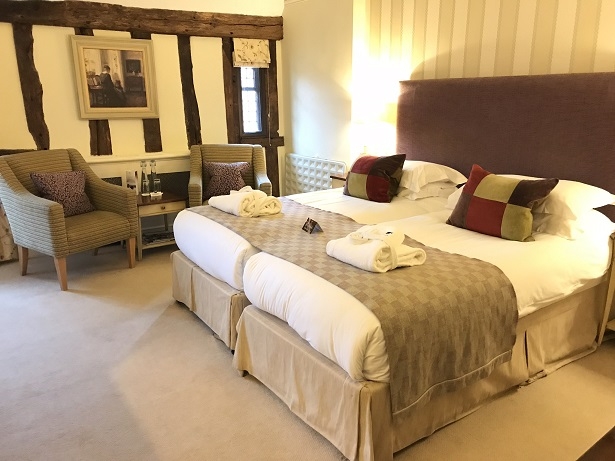 My bedroom at The Swan at Lavenham 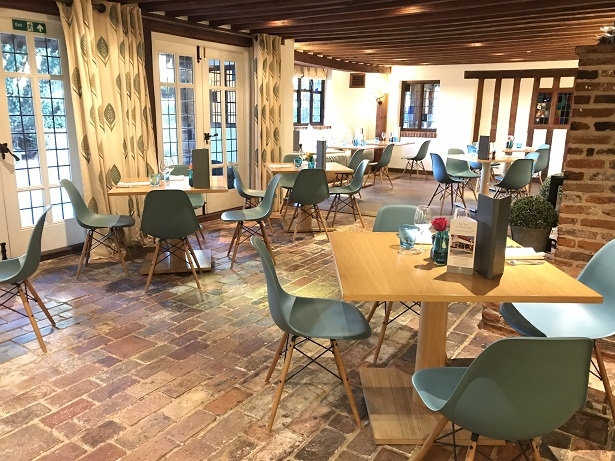 There are two restaurants at The Swan at Lavenham: the informal Brasserie (pictured) and the more formal restaurant The Gallery (pictured later)

Arriving at the Swan hotel in Lavenham, Suffolk

Finding The Swan itself is easy – it’s right in the heart of the beautiful Suffolk town of Lavenham, famous for its stunning traditional half-timbered buildings which line every street. 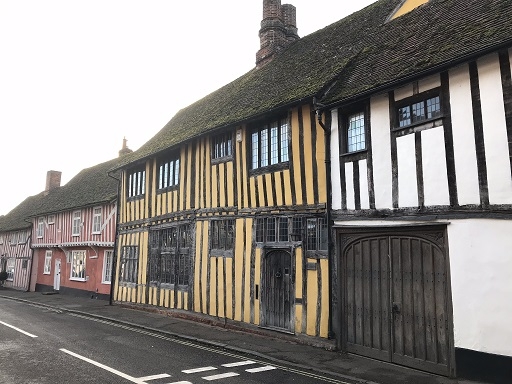 Indeed, the moment you check in (and haul your bags from the hotel’s private car park which is across the road) you might be tempted like me to head straight out again and take endless pictures of the rickety buildings, which include the birthplace of fictional wizard Harry Potter (it’s De Vere House on Water Street, just round the corner from the hotel) – Lavenham having stood in for Godric’s Hollow in Harry Potter and the Deathly Hallows.

Discover more of the Pride of Britain group by checking out these other great hotels: 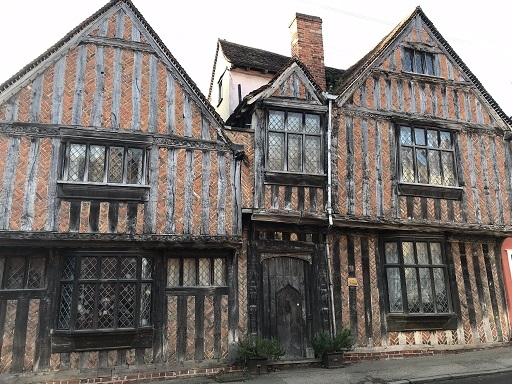 The suitably creepy De Vere House on Water Street which was used as the filming location for Harry Potter’s birthplace, Godric’s Hollow, in Harry Potter and the Deathly Hallows 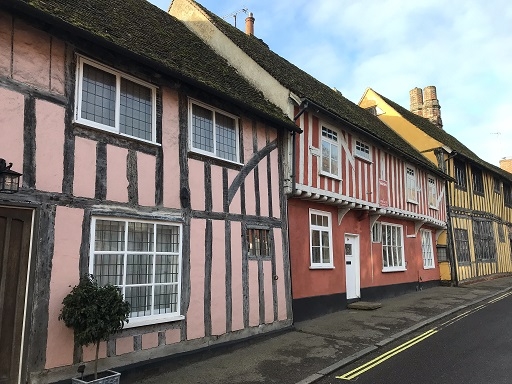 The Weavers’ House spa at The Swan Lavenham

Once you’re done with marveling at a village which seems to have come straight out of a film set or medieval England (more than half the buildings are listed) then you can retreat to The Swan for a thoroughly relaxing stay. I headed for the spa for a hour-long massage and emerged very relaxed, which was the whole idea – it’s not a vast spa area though so I imagine this could get busy in the summer months – and resisted the various food and drink options on offer in the spa’s conservatory/chill-out room so as best to enjoy dinner that evening. 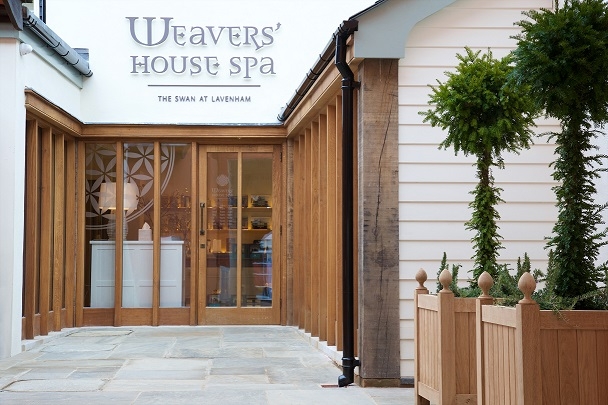 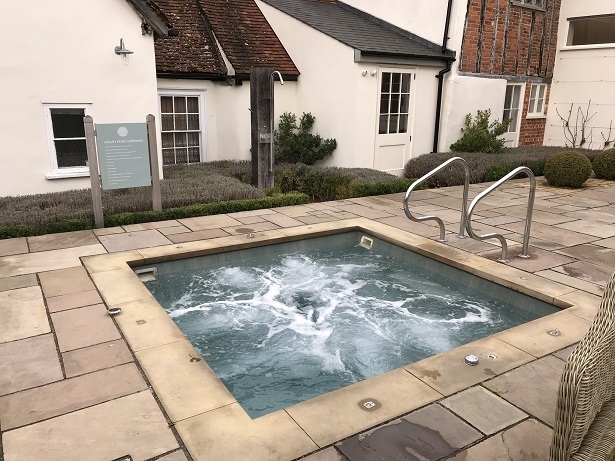 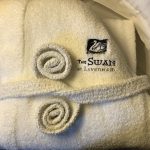 Bedrooms at The Swan Lavenham

Wearing my Swan hotel fluffy robe back to my room there were all sorts of delights waiting for me, from Temple Spa toiletries (lots of them) to tea and coffee facilities, Smart TV, lots of towels, a fruit bowl and generally all the essentials and non-essentials you’d hope for in a luxury hotel room.

It was a decent size and had a large and immaculate bathroom with a free-standing bath, and our offered turndown service produced even yet more toiletries and towels. 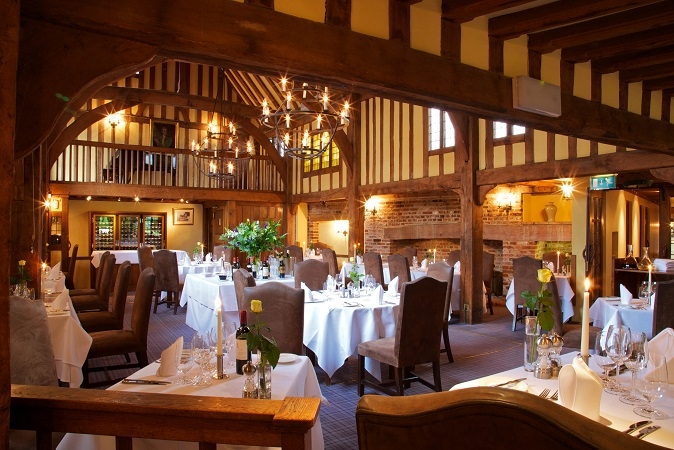 The formal dining option at The Swan is the Gallery restaurant

Dinner at The Swan Lavenham

Dinner in the formal Gallery restaurant (it actually has a gallery and a gazillion exposed beams) was as impressive as the surroundings. The menu was sparsely-written but intriguing, with dishes described thus: ‘Tarragon, Gnocchi, Wild Mushroom, Dashi’ and ‘Carrot, Confit Lamb Shoulder,  Goat’s Curd, Pumpkin Seeds’ or ‘Potato, Onion Jam, Truffle.’ 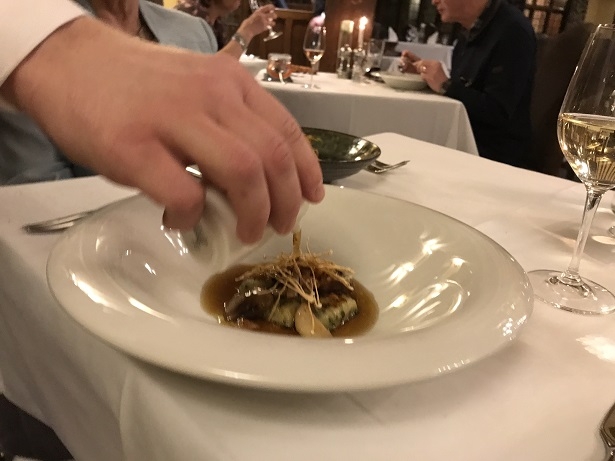 Our dashi and tarragon soup being poured

It certainly added a touch of mystery to the proceedings and while some seemed frankly bonkers – ‘Mackerel, Rhubarb, White Chocolate and Buttermilk’ anyone?’ – you did get the feeling that head chef Aaron Gilbert knew what he was doing, even if the dishes are listed in sections from ‘To Start, In-Between, To Follow, and Mains which makes you worry you’re supposed to select from every course, (but thankfully you don’t have to, unless you’ve ravenous).

Our faith in the chef was justified as the dishes were excellent, from the hand-poured dashi soup and to the scallops with crispy pork belly, to the roast loin of venison with kale for the main course. 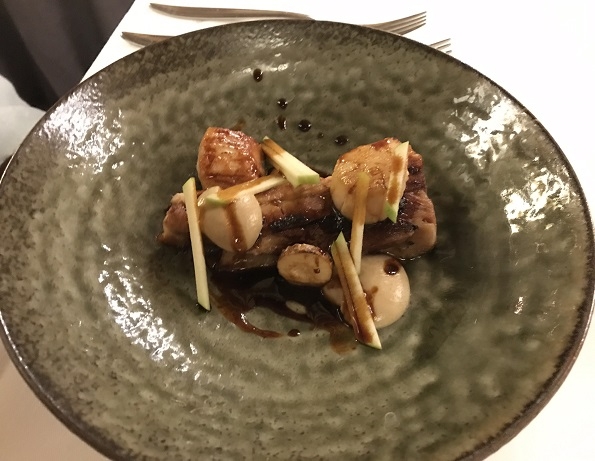 My starter of scallops and crispy pork belly 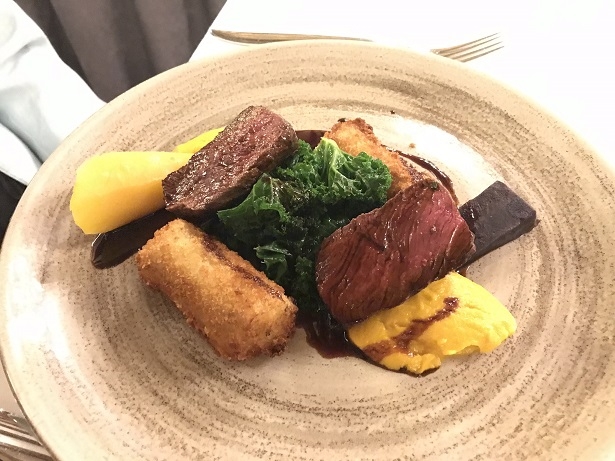 Roast venison, croquettes and kale for the main course

There was an epic choice of desserts ranging from a deconstructed Marathon bar to ‘Pudding Rice’ and so we went for passion fruit tart with white chocolate and the prune and Armagnac souffle which sounded weird but thankfully tasted great. Thus replete, we staggered upstairs and crashed out in our lovely large bedroom.

Breakfast at The Swan Lavenham

After a dreamless sleep it seem only minutes later we were embarking on another epic meal, this time, breakfast, which was a slightly austere event thanks to lots of staff hovering about in dead silence and seeming just moving jugs of juice around. Some background classical music and making more of the central table would go a long way here but the food was still excellent. 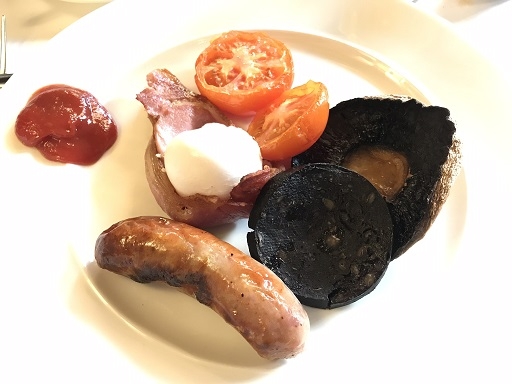 There was just time for a grand tour of The Swan before we left and here we got to nose around the different standards of hotel rooms – which range from modern to classic styles, some boasting four-poster beds and stand-alone baths, and all with a sense of style and luxury. 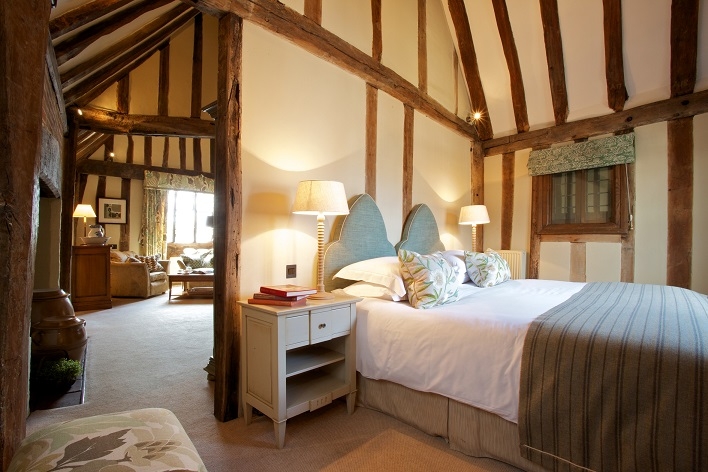 The Churchyard Suite, room number 7 at the Swan at Lavenham 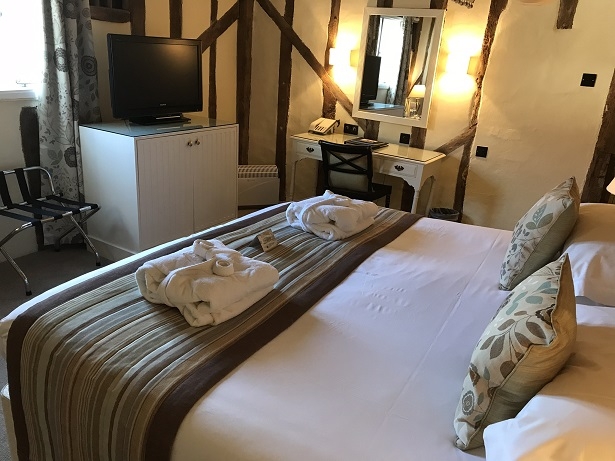 The Airmen’s Bar at The Swan Lavenham

Finally we visited the hotel’s own pub, the Airmen’s Bar. Named after the servicemen stationed at RAF Lavenham, the bar is like stepping back into the 1940s, with poignant memorabilia of the 487th Bombardment group of the 8th US Army Air Force who flew more 6,000 sorties while stationed here during the Second World War.  It’s a fitting tribute and yet another thing that makes The Swan at Lavenham a truly unique place to stay.

Hotel information and to book The Swan at Lavenham

The Swan hotel and spa, High Street, Lavenham, Suffolk C010 9QA
Prices start from £110 per room B&B based on two sharing going up to £365 for a top Constable suite. Check website for special offers and packages. Dinner from the a la carte menu is from £40 per person for three courses. Overnight guests have a complimentary two-hour session with use of the facilities in Weavers’ House Spa including the sauna, steam room, outdoor vitality pool and relaxation lounge.

Check availability and book The Swan at Lavenham

The Swan at Lavenham is part of the prestigious Pride of Britain Hotels group which is made up of some of the best 50 hotels in Britain. Other Pride of Britain Hotels reviewed by ALadyofLeisure include: Hampton Manor hotel: top class Michelin dining near Birmingham; Barnsley House hotel and spa: luxury Cotswolds stay; Lucknam Park hotel near Bath: Palladian mansion, spa and Michelin-dining