You would have to start early and finish late to squeeze in the maximum amount of relaxation possible at Nirvana Spa day spa near Reading, the award-winning spa near London and one of the top day spas in the country.

A day at Nirvana Spa

I spent the whole day there and yet when it was time to leave I realised I still hadn’t fallen asleep on a poolside lounger as I’d planned, nor read the Sunday papers that I’d been lugging around with me all day, or even tried out the futuristic-looking endless swimming pool lanes which let you swim against a current rather than having to turn at every end.  So what on earth had I been doing during my luxury day spa break? 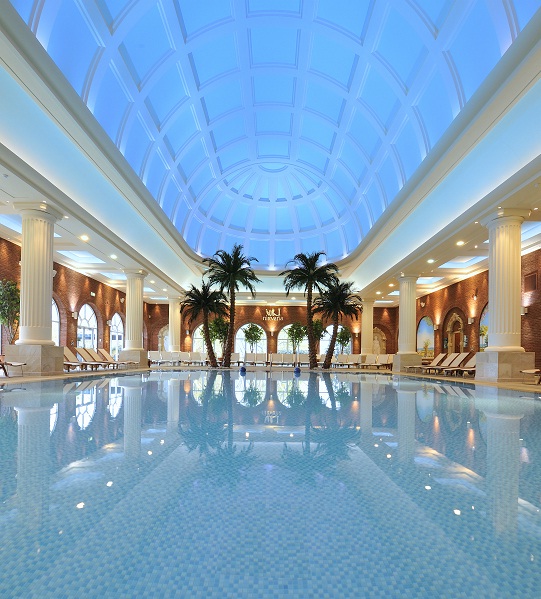 My friend Lisa and I arrived at Nirvana spa as planned at 11am having driven from London, but the spa opening times are 6.45am-10.30pm on weekdays apart from Friday which closes at 11pm, and 8am-11pm at the weekends – the gym opens at 6am weekdays and 8am at weekends.

It is always a good sign when you can start to feel your shoulders unwind just on walking into reception at a day spa and there was indeed a very relaxing air to the place, from the smells and the music to the sight of the large hydrotherapy pool through the glass wall. 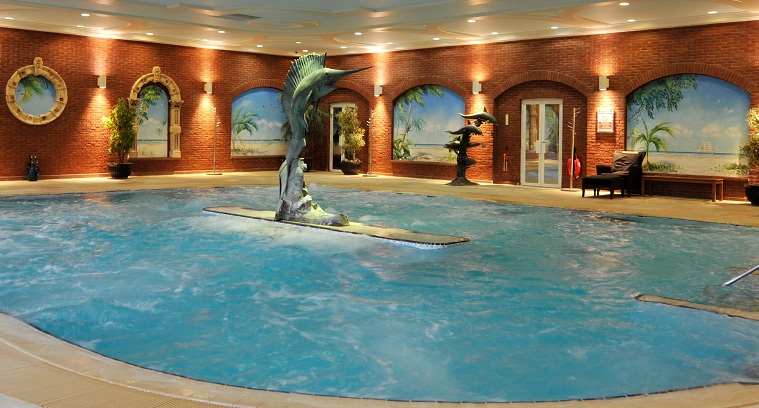 The changing rooms were large and clean, and robes, towels and locker keys were all allocated. A quick change and we were straight off to the Crystal Suite for our treatments.

I had my first ever hot stone massage which was extremely relaxing: for some reason I’d always assumed the stones were just plonked on your back and left there, but the sensation of heat trailing up and down my back and legs was really memorable, while Lisa enjoyed her Swedish massage.

The relaxation continued back in the Crystal Suite afterwards as we supped on fruit tea while lounging on heated ceramic loungers which were surprisingly comfortable to lie on. 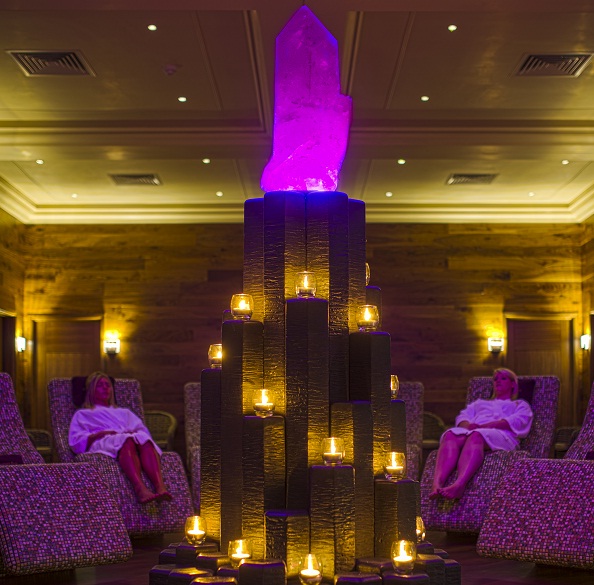 After a spot of lunch (see below) it was time for the spa’s signature treatment, the Celestial Flotation, so we gathered with three other women at the side of a beautiful circular pool with Zodiac frescoes along the walls and a spectacular twinkling ceiling showing the night sky. The addition of 60 tonnes of Dead Sea salt in the pool, which was heated to 35 degrees, meant that you could float without swimming or being supported at all (buoyant pillows were provided if you wanted) and a gentle current gently but steadily wafted you around the pool. 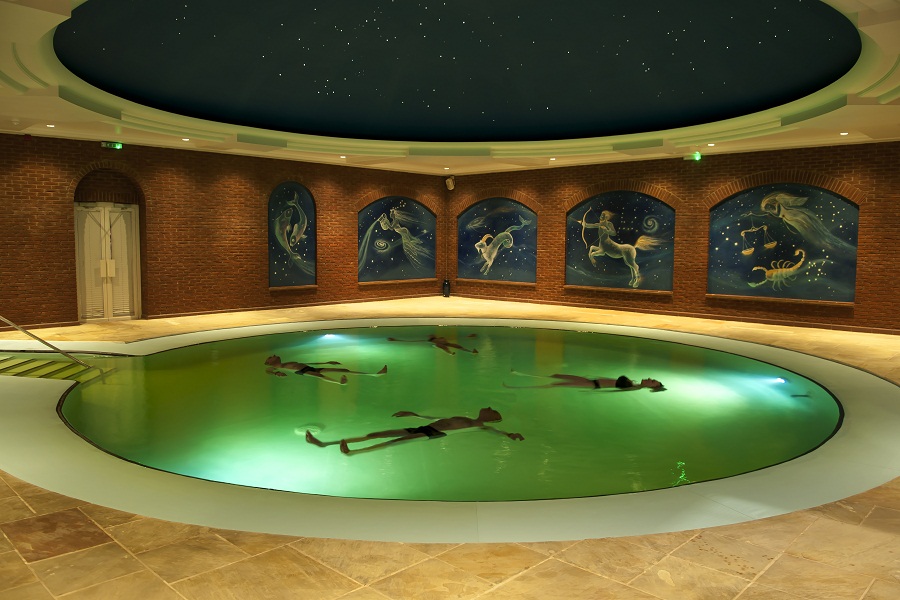 The Celestial Flotation experience was incredibly relaxing (and rather surreal)

With the lights dimmed we were left to float for half an hour and it was quite a magical experience: the water was so warm you barely felt you were in motion at all and it was quite a surprise whenever I opened my eyes to see the night sky moving past. The current ensured no-one bumped into each other and the huge salt content means that as well as being very relaxing, the water would help with cuts and other skin ailments too. 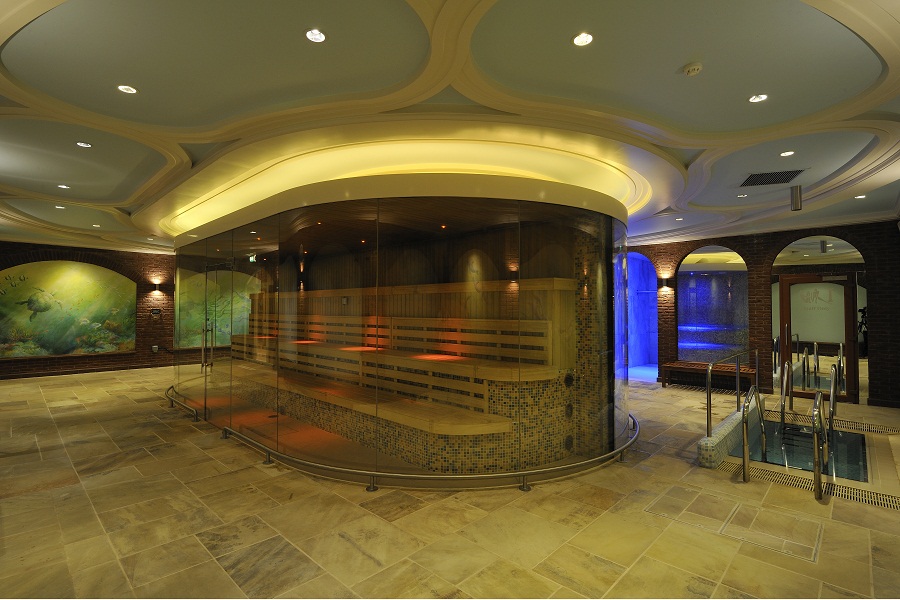 Off to the hydrotherapy pool

Time was ticking on and we still hadn’t made it a third of the way round the massive map we’d been given on arrival. It was time to get serious about relaxing. We did the double-whammy of the steam room and the sauna with a heart-stopping dip in the ice-cold plunge pool in between (and later discovered actual ice you could smother all over yourself to give those pores a good workout). Then it was off to be pummelled by some of the 53 jets in the huge and bubbling hydrotherapy pool before a quick sunbathe by the largest and quietest pool (there are three in all), the other side of the complex.

While I’d taken a friend I think that solo travellers would be totally comfortable in visiting the spa on their own – it’s a very welcoming spa for singles as people are on the move so much that you never know who is with anyone or not and there are so many loungers that you won’t be confronted with couples having reserved them for each other.

We then tried out the jacuzzi and the tepidarium, (we also found the gym but decided we were too relaxed for exercise) and then realised there was only time left for a quick drink and slice of cake back in the restaurant before it was time to shower and reluctantly depart.

Into health and fitness? Why not check out my fitness reviews:

Tennis, sailing, swimming and cycling on a Mark Warner holiday

A spa break at award-winning Pennyhill Park hotel and spa

Super-pricey but Equinox gym will get you super-fit

As we left there was a sudden influx of more customers including a hen party, taking advantage of the evening offers, but while the changing rooms became a little more hectic the spa overall is big enough to cope without becoming crowded. The spa is a membership club as well as for day guests and if I lived nearby it would be an extremely tempting prospect. However you can certainly pack a lot into one day – just make sure you get there early to fit it all in.

At lunchtime it was the first sunny day of the year so in spite of the wind we sat outdoors by the open air pool in our fluffy robes and ate a vast amount of food. We’d been recommended to try the new Superfood salad (£8.95) with all sorts of healthy stuff including spiced quinoa, beetroot, chickpeas, broccoli, spinach, avocado, walnuts… it was so packed with ingredients it showed no sign of diminishing even after I’d been eating it for ten minutes. 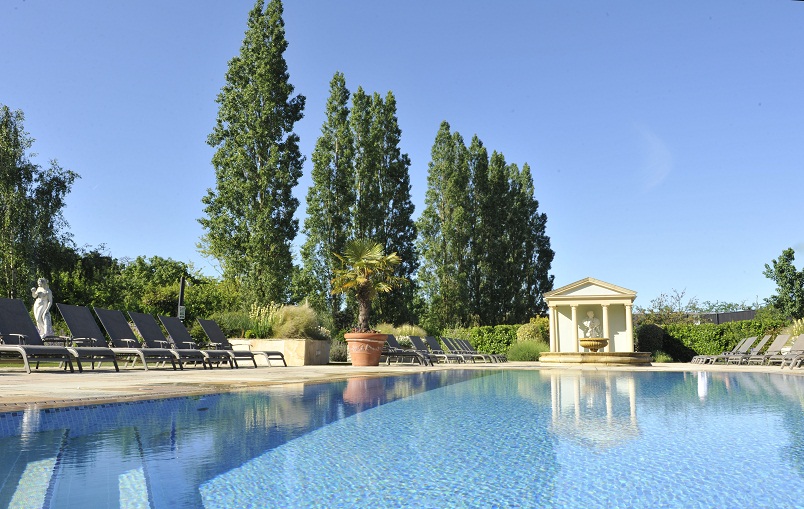 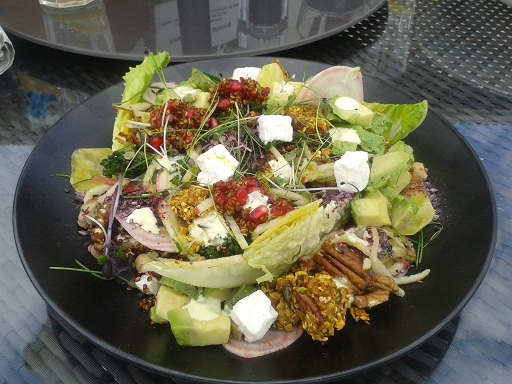 However we didn’t stop there: we also tried the smoked salmon with brown crab (£.7.50), the pan-fried king scallops (£8.60) and the seared salmon with rice noodles (£10.50) and at that point we were informed we could try out the restaurant buffet, which had a whole load more healthy but tasty food and is available to people on the day package.

Overall the menu was well-designed with a good selection of reasonably-priced food, which leaned towards the nutritious side but which still allowed for indulgence as the many cakes and desserts on offer (including chocolate brownies) showed. 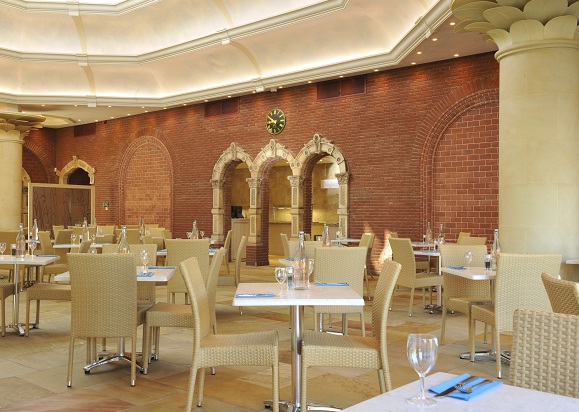 The restaurant at Nirvana Spa, which does breakfast, lunch, dinner and afternoon tea and cake

Nirvana Spa information and getting there

There are three different tiers of membership options at Nirvana Spa.

Nirvana Spa is located in Sindlesham near Wokingham, just outside Reading and is within easy reach of junction 11 of the M4 and the A329M. There is plenty of free on-site parking. Winnersh railway station is less than a mile away and is on the London Waterloo to Reading line.

Into health and fitness? Then you’d love these features: Equinox Gym London: super-pricey but will get you super-fit; A relaxing spa break at Ragdale Hall, Leicestershire; A sports and pampering break good enough for the England rugby team: a stay a Pennyhill Park, Surrey;

One thought on “Nirvana Spa: A hard day’s relaxing at this top day spa near London”