There was far more to Milsoms Kesgrave Hall than I’d expected. Having just come from its sister hotel, Talbooth House, a luxurious, refined, relaxed country house with outdoor pool and 12 beautifully designed rooms, I wasn’t sure whether the 23-room Grade II-listed Kesgrave Hall would be on similar lines or be something far grander. 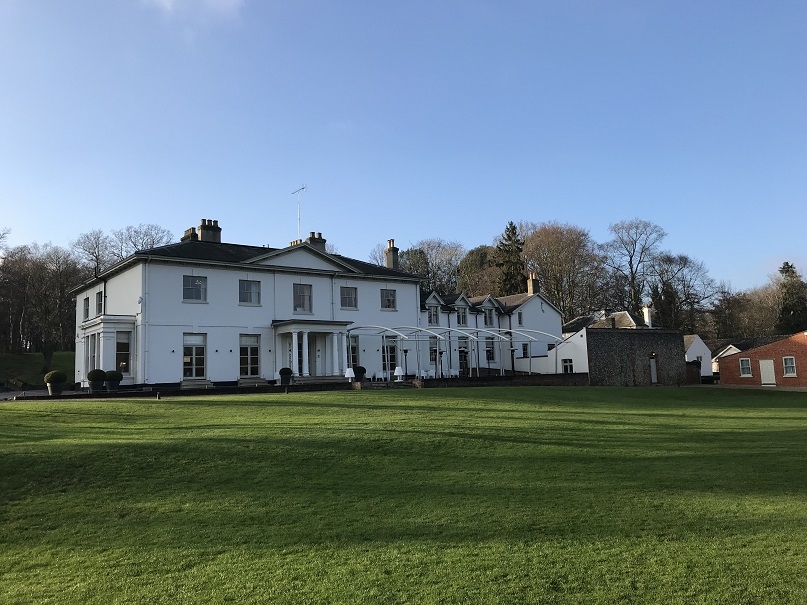 It turned out to be neither: instead it was a mixture of several styles which blended together to make a very different hotel experience. It was a wonderfully relaxed place to stay, with the bustling lounge, bar and restaurant built along ‘shabby-chic’ lines in the manner of The Pig hotel chain, all bare floorboards, Chesterfield sofas, Union Jack cushions and playing card picture frames and a focus on local ale and artisan gin. 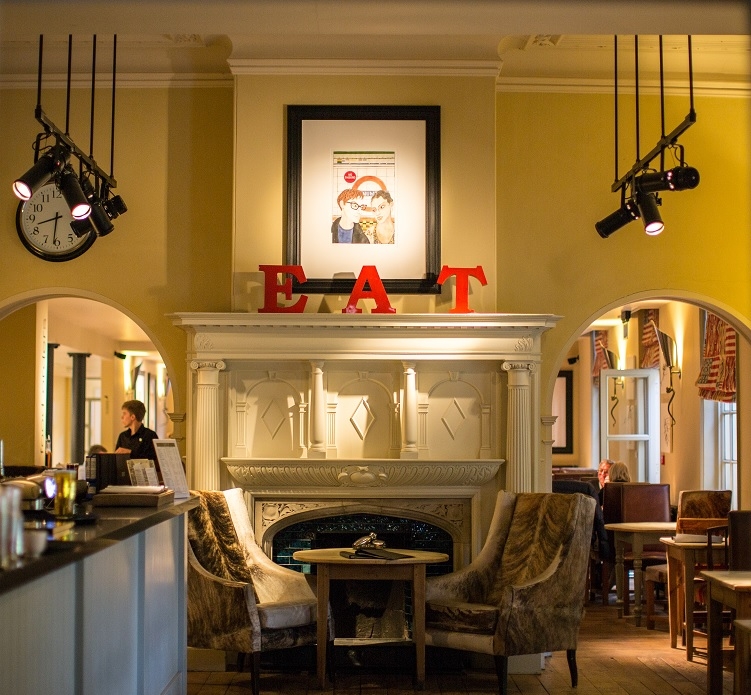 The downstairs bar leads to the dining room beyond

The restaurant was packed (no small achievement on a wet Wednesday lunchtime in January) and was a real hotspot of activity, with diners including young entrepreneurial types planning their latest business ventures, couples on a romantic breaks, work colleagues, family groups and old friends having a long-awaited catch-up. 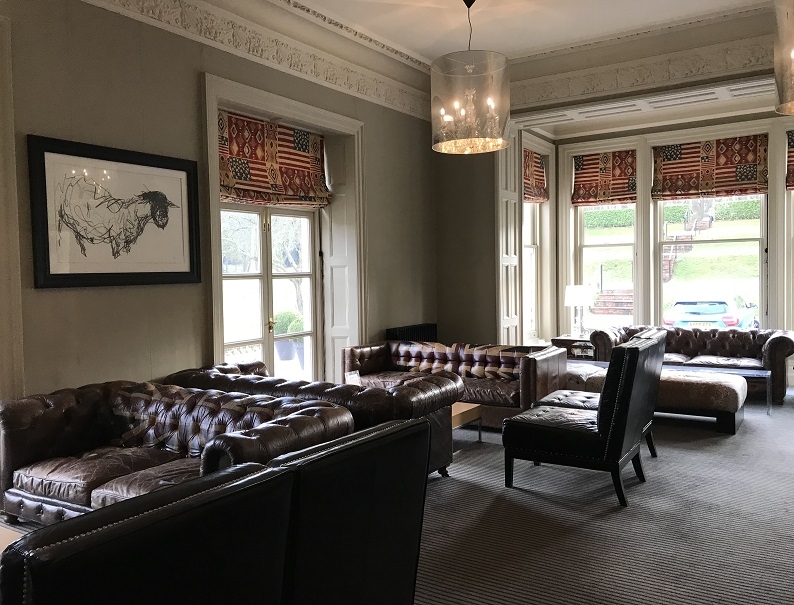 I managed to grab a picture in a rare empty moment… this is the lounge which was a popular spot for morning coffee, afternoon tea and pre-dinner drinks

Lest this all seem too modern and trendy, the reception hall had a grand sweeping staircase underneath which was an airplane propeller and a plaque dedicated to the memory of the 356th fighter group of the US army air force which was stationed in Kesgrave Hall during the Second World War and in particular to the 72 airman who flew from RAF Martlesham Heath and never returned – a fitting tribute and a nice reminder of the history of the hotel.

Upstairs our bedroom was quirky – it had a zebra print sofa and shiny metallic packing trunk – but spacious and full of everything you could want from a hotel room: a large immaculate bathroom with separate shower, good lighting, a writing desk, coffee facilities and power points everywhere. 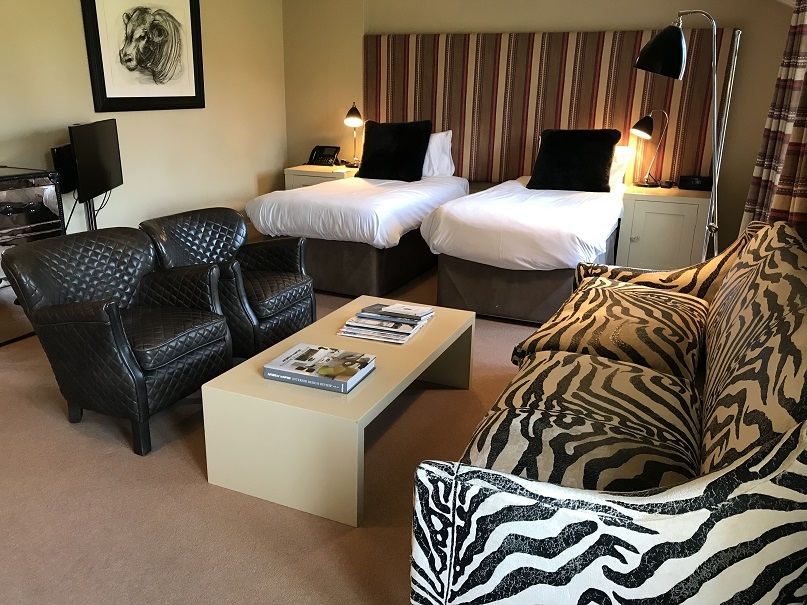 Our bedroom was large and airy, with comfy beds, quirky sofas, a writing desk (not pictured) and a vast bathroom

Our bedroom was large, light and airy with views over the woods at the back of the hotel and Kesgrave Hall’s newish Hanger facility which can host weddings, parties and special events such as its annual Valentine’s Ball. The hotel car park is a little way from the hotel itself which might not be ideal for some, but there is disabled parking nearer the main entrance as well as a drop-off point so you can offload your luggage on arrival.

If you’re looking for some great hotels with a modern vibe then check out some of my other reviews: 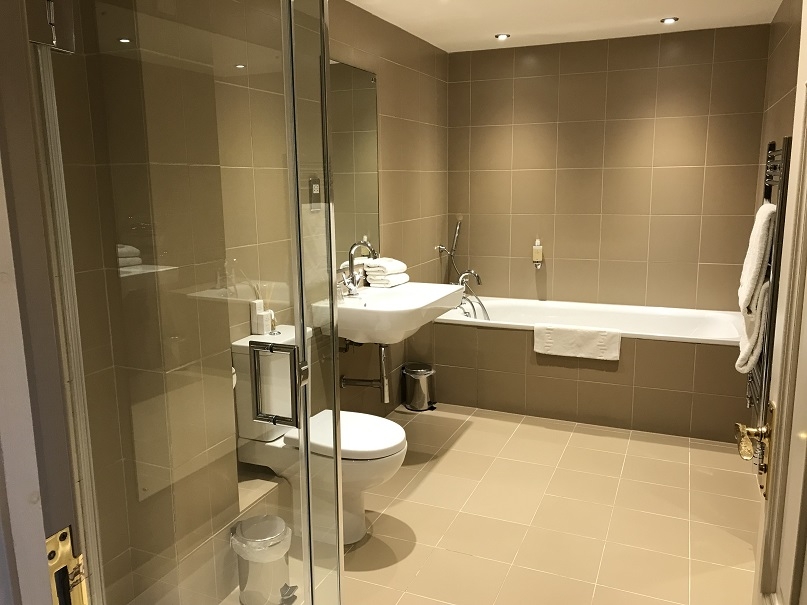 Our bathroom was huge

Having decided Kesgrave Hall to be a thoroughly modern venue, I surprised myself by having that most traditional of meals: afternoon tea. I don’t usually have afternoon tea on these hotel trips as I’m usually too full from lunch or about to embark on dinner but I made an exception in this case (it came with Champagne, need I say more?) and I’m glad I did.

It was one of the best afternoon teas I’ve ever had, with a blissful selection of classic sandwiches – smoked salmon and cream cheese, egg mayonnaise, cucumber and ham and mustard, all made with great care and lovely soft bread. The scones were ideal – tasty and light – with strawberry jam and clotted cream – and the selection of sweets and cakes including blood orange macaron and chocolate parfait rounded off a perfect afternoon tea. 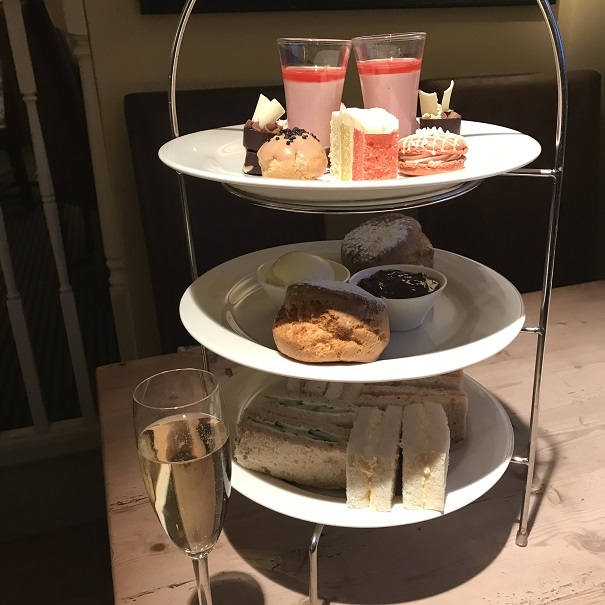 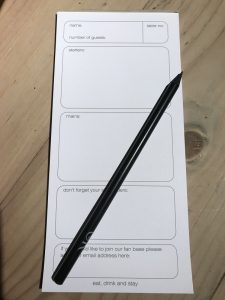 The restaurant at Kesgrave Hall

There was just enough time for a very indulgent post-tea nap before it was time for dinner and here we discovered another face of Kesgrave Hall – that of a gentleman’s club, where diners write their food order on a notepad and hand it to the waiter.

They have a similar system at The Reform club on Pall Mall (and presumably many others) and while it was a fun quirk, it felt rather impersonal and even imperious to hand over your written commands rather than ask politely. It was a little redundant too as our waiter read the order back anyway to check they could read our handwriting (and which didn’t work too well, as we ended up with two glasses of wine when we’d ordered only one). 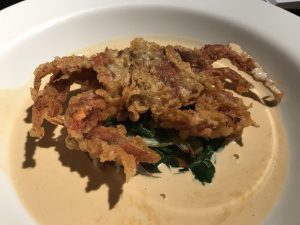 However some people might like the concept and the menu itself was clear and varied, with changing daily specials, many dishes coming in ‘ample’ or ‘generous’ sizes and main courses coming with a side order for no extra charge. Of the starters, the tempura soft shall crab contained too much, too-crunchy batter and not enough crab but the deep fried crispy whitebait was far better and the oak smoked salmon with crab mayo was also a hit. 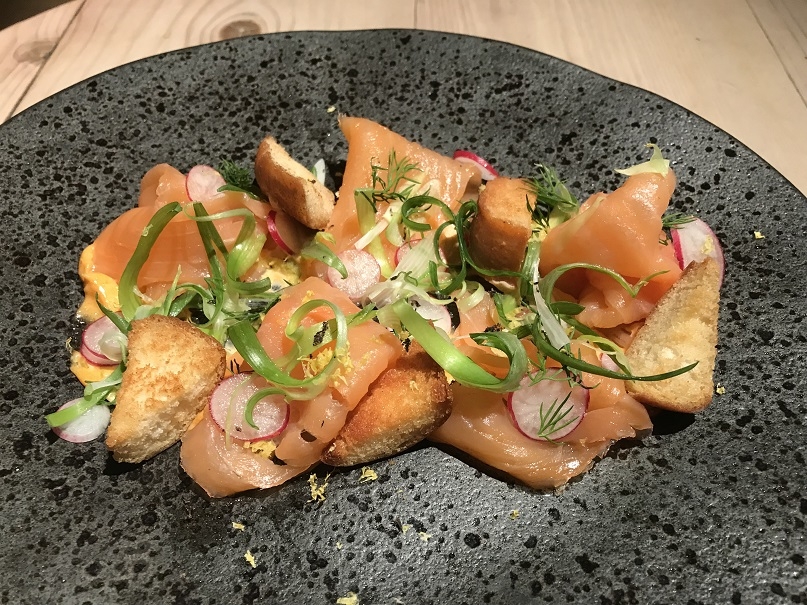 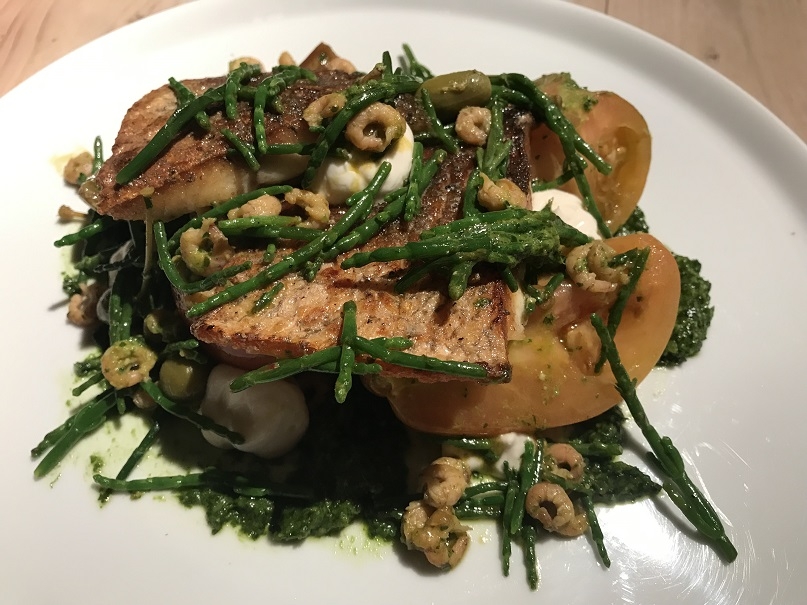 After all that indulgence I needed a walk before embarking on breakfast the next day, but was disappointed to find that there weren’t many options in the grounds except a path to the main road. While the grounds aren’t vast I thought a circular walking or running trail would have been a nice way of allowing people to explore the surrounding woods – the true sign of a night away in the countryside – but I understand there are plans to do more with the outside space, including possibly building a spa, so watch this space. 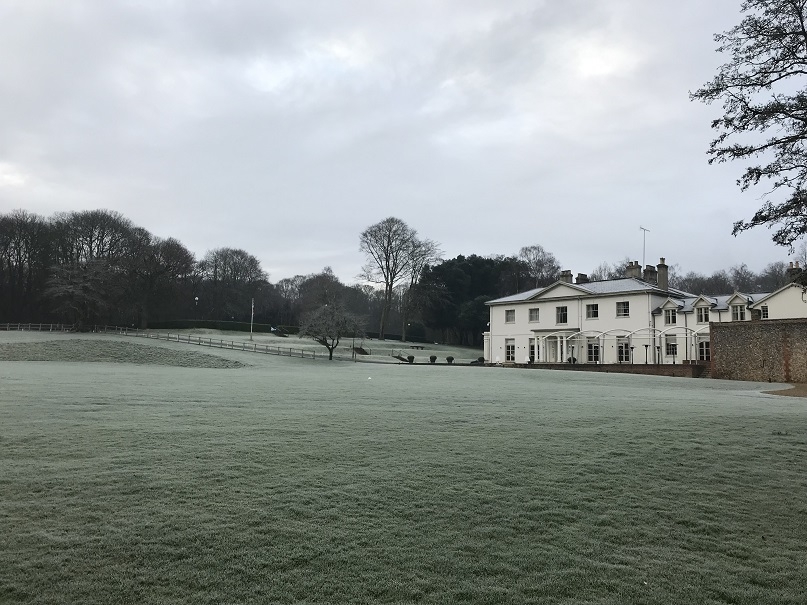 Back in the dining room I was served the biggest bowl of porridge I’ve ever been served but some of the best coffee, so at least it gave me strength to negotiate the tricky icy path up to the car park to retrieve my car before checking out. Before leaving I had a little look around the White House, a separate four-bedroom building which is perfect for those wanting a little more privacy, and the bridal suite in the main house which was vast and romantic at the same time. 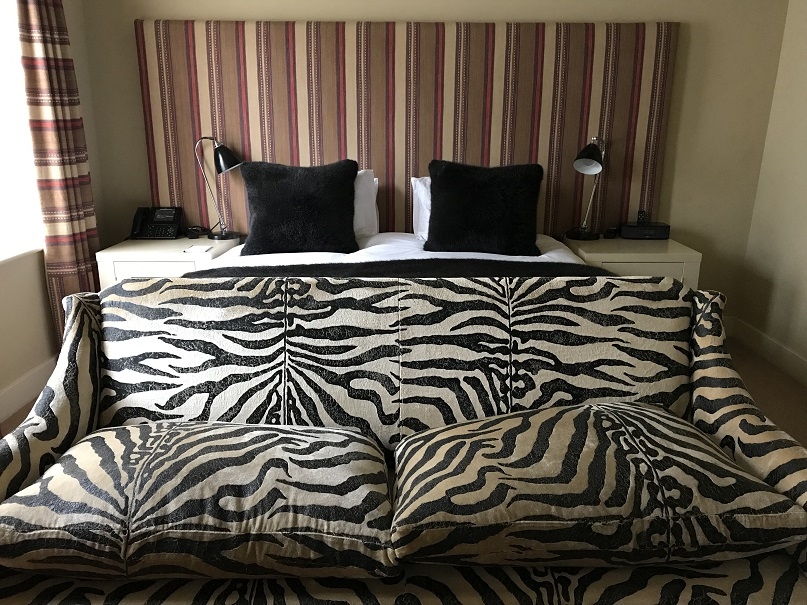 One of the individually-designed rooms in the separate building, the White House

Kesgrave Hall was certainly more intriguing and interesting than I’d expected and judging by the stream of people arriving for morning coffee, early lunch or just a catch-up drink in the bar as I left, it looks like many other people do too.

Other luxury hotels in the East of England are: A seaside stay at The Brudenell, Aldeburgh; Good taste in every sense at The Swan, Southwold; Medieval magic with a modern twist at The Swan, Lavenham; Suffolk food heaven at the Crown and Castle, Orford;