The Headland hotel Newquay is the perfect place to blow away the cobwebs. Perched right at the end of the glorious Fistral Beach in Newquay, Cornwall and surrounded by nothing but coast and countryside all around, it’s ideal for bracing walks in the winter and sunbathing in the summer – and of course, surfing all year round! 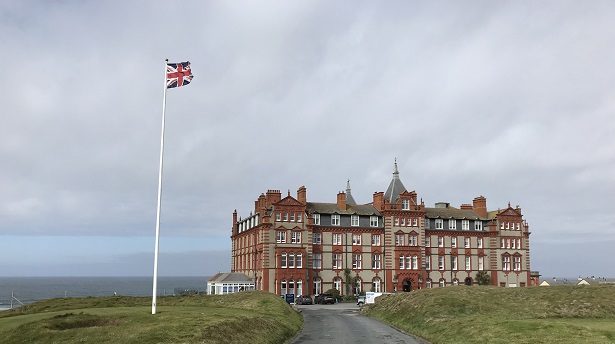 A stay at The Headland hotel Newquay, Cornwall

If the Headland looks familiar, then you might have seen The Witches, the film of Roald Dahl’s book which was made here starring Anjelica Huston in the early 1990s (it was called the Hotel Excelsior in the film – there’s also a 2020 remake which is set in the USA). Or you might just have seen picture of the Newquay coastline which it’s fair to say, it dominates.

Book The Headland at Booking.com

Visit The Headland hotel on Tripadvisor 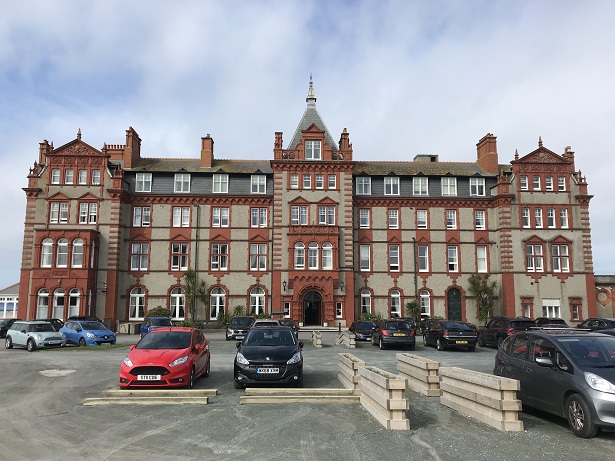 Location and history of The Headland Hotel Newquay

Located at one end of Fistral Beach, just minutes from the waves, The Headland hotel is a seriously impressive-looking building, a vast square block of stone which looks like it could handle anything the elements could throw at it. It could hardly be a more exposed spot and yet this luxury five-star hotel has been withstanding storms, wind, rain, surf and even the occasional heatwave for 120 years.

Opened in 1900 in the face of severe local opposition, The Headland was the height of luxury for its time, boasting electric lights, heating, plumbing and opulently-decorated bedrooms. Having fallen on hard times after the Second World War, the hotel was rescued by John and Carolyn Armstrong who bought the hotel in 1979 and who still own it today. After four decades of investment and hard work, The Headland is now back to its former glories, with 95 bedrooms, a luxury spa, modern gym and award-winning dining.

If you like hotels with great spas like this one then you have to read these great reviews from ALadyofLeisure.com!

Arriving at The Headland hotel, Newquay

To arrive at The Headland is to get a glimpse of how the hotel used to be in days gone by. A doorman came out to my car to help me with my bags which were quickly spirited up to my bedroom; the entrance lobby is plush and smart and leads into the main lounge where people were enjoying afternoon tea, and the wide staircases, polished brass and thick carpets all contributed to a sense of old-fashioned luxury. 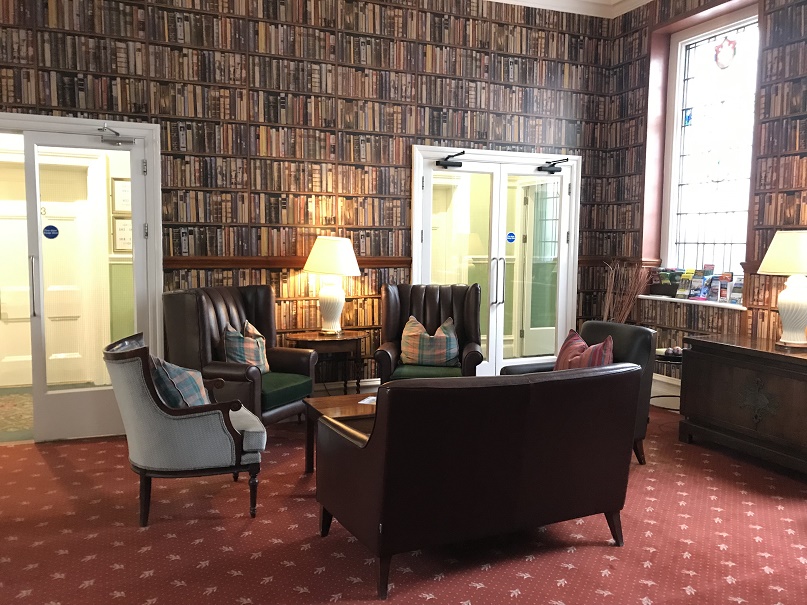 An upstairs lounge at the Headland 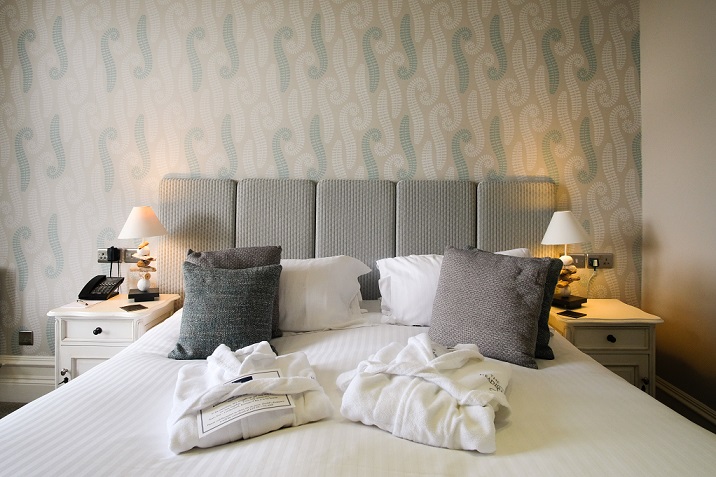 My bedroom was large and luxurious, with stunning views of Fistral beach out of my window

Bedrooms at The Headland hotel

Thankfully it all feels very modern rather than faded glories. My bedroom was large and luxurious, with a king-sized bed, high ceilings, modern bathroom with roll-top bath and separate shower, and best of all, stunning views of the rolling waves of Fistral Beach. If the sun had been shining and the temperature a good few degrees warmer then I would have thought I was in Bondi Beach, Australia, given the epic sprawl of the bay. 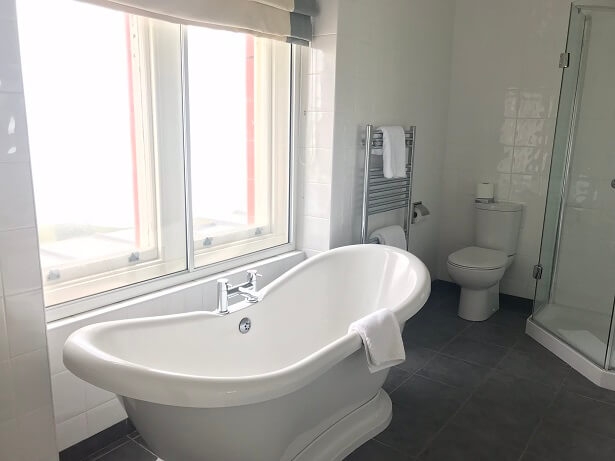 My bathroom with roll-top bath and great views of Fistral beach (which turned out to be very hard to capture in this type of shot in both sunshine and rain!)

The spa at The Headland hotel

However as I was in off-season Cornwall the weather was on the bracing side and so, not at all reluctantly, I took myself off to The Headland hotel’s spa instead; an oasis of warmth and relaxation, with an indoor swimming pool with hydrotherapy jets, loungers and a airy cafe. Recently opened is the hotel’s brand new multi-million pound Aqua Club spa which contains six swimming pools, a sun terrace and a new restaurant, The Deck. 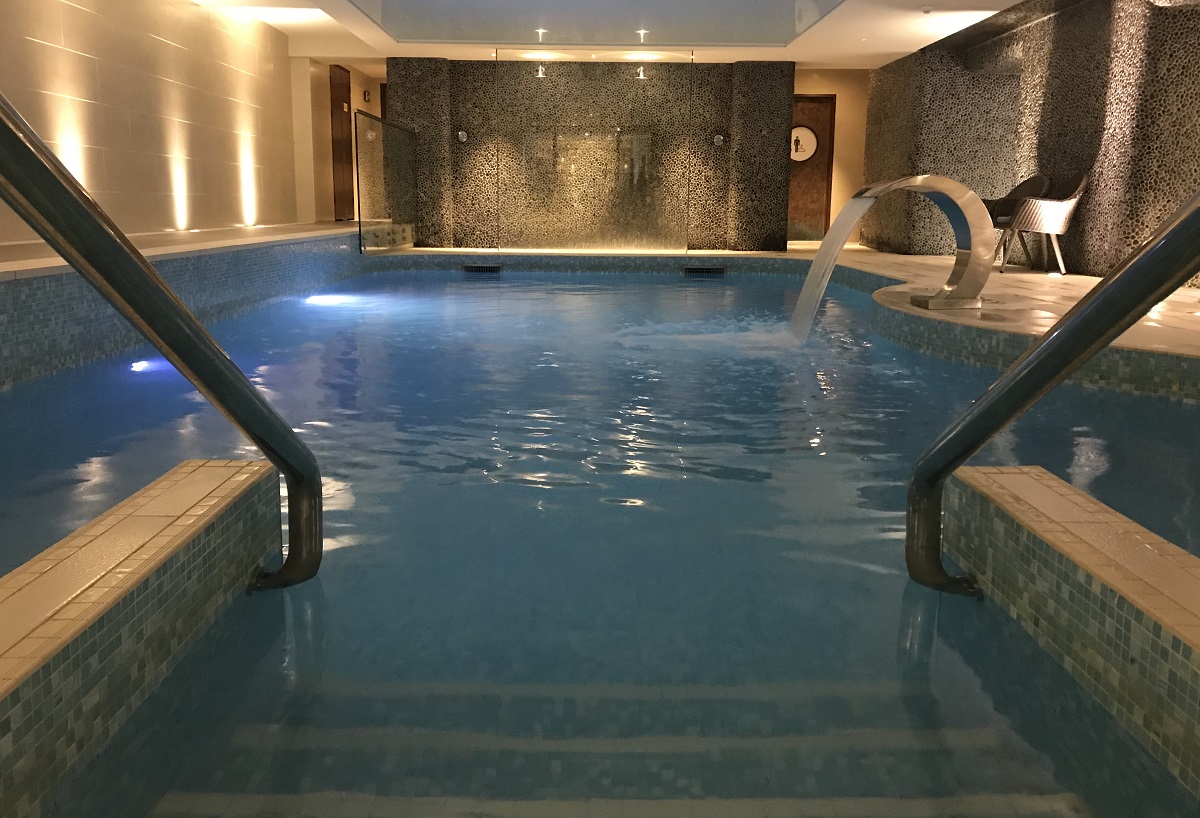 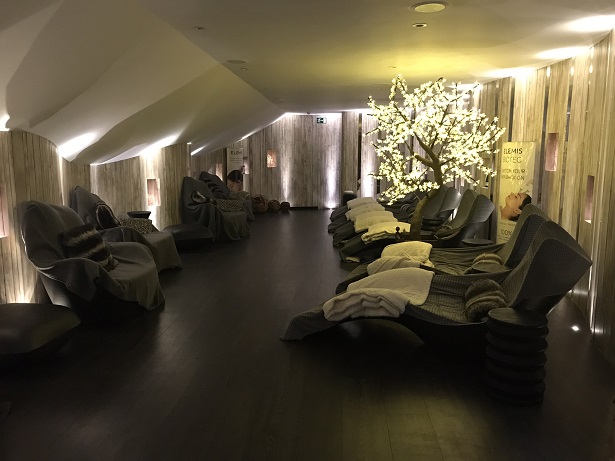 The relaxing loungers in the Headland hotel’s spa

Dinner at the Headland hotel

Dinner for the night of my stay was in the hotel’s Samphire restaurant which makes the most of the hotel’s beachfront position and offers great views in the summer months. The decor feels traditional but the food from chef Christopher Archambault was lively, fresh and modern with a heavy emphasis on locally-sourced seafood. 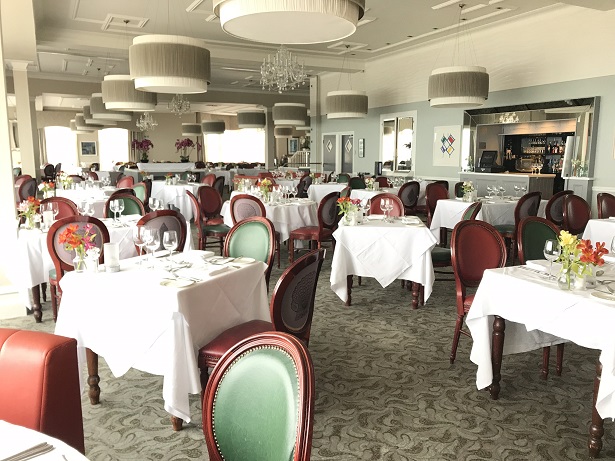 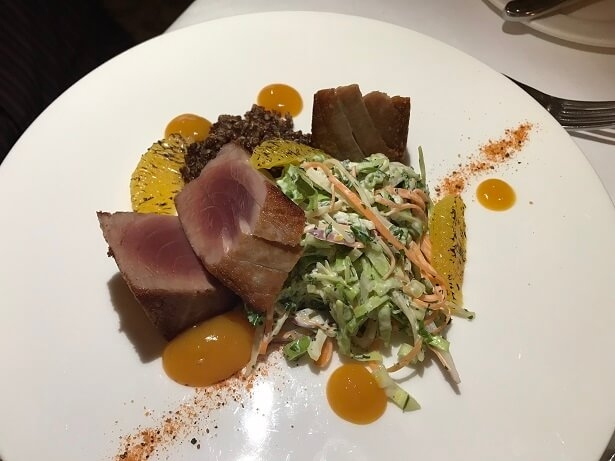 Particular highlights were the starter of grilled mackerel with leeks vinagrette, while the mains of roast rack of lamb with potato rosti and seared tuna loin were both excellent, as was the service from our friendly waitress which included recommending a Brazilian red wine Miolo, which was delicious. 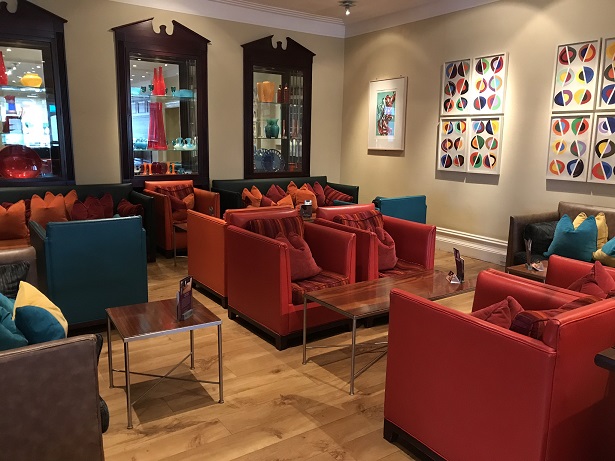 For those wanting a little less traditional feel, the hotel’s vintage cocktail bar felt surprisingly modern, with bright colours and an excellent range of cocktails and craft beers. I tried not to indulge too much though as the next morning promised an extra challenge: a surfing lesson. An early night’s sleep was on the cards. 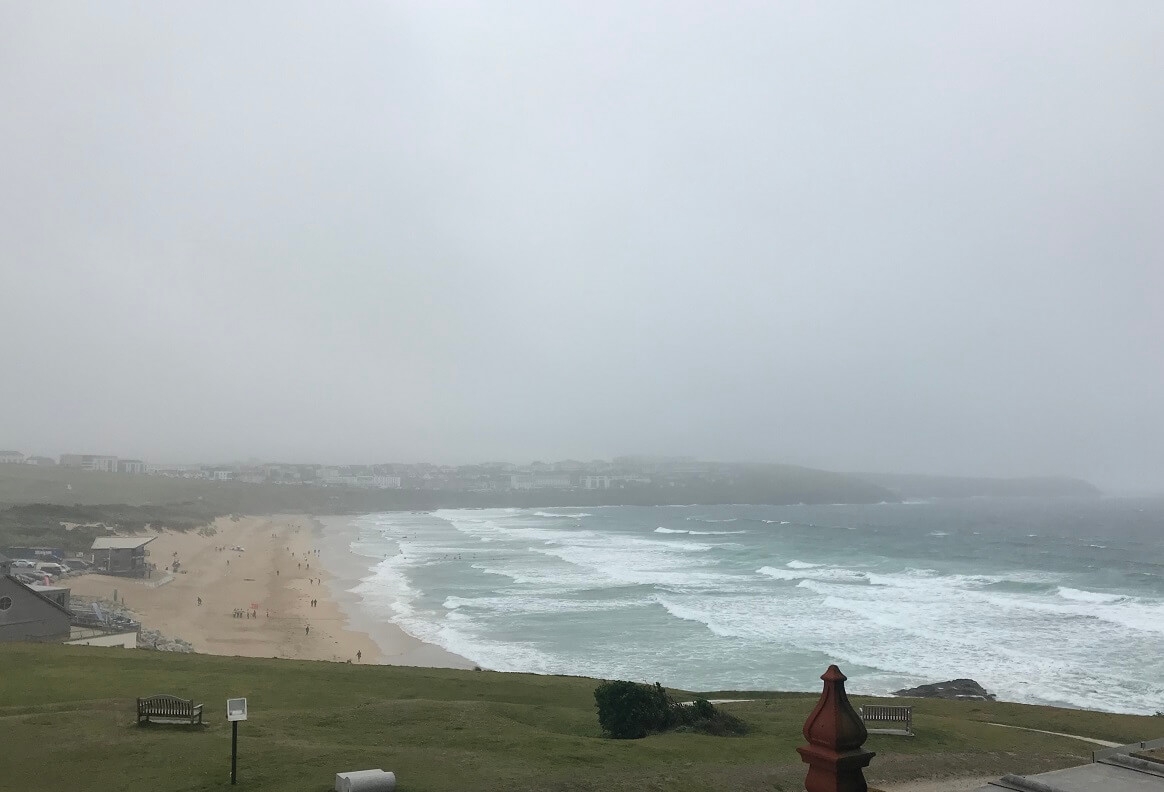 Learning to surf at the Headland hotel Newquay

The next morning the view from my window was wild, wintry and grey – hardly the surfing conditions of my dreams. I headed to breakfast with trepidation (which wasn’t helped by the rather odd-looking ‘Avocado mash-up’ which I’d bravely ordered – the coffee was good though) and by 10am I was walking round the corner of the hotel to The Headland hotel surf school.

By some Cornish miracle the grey skies had been replaced by clear blue skies, sunshine and white foaming surf, and the whole prospect of a surf lesson looked far more fun. I was lucky enough to have a one-to-one lesson for a couple of hours with the excellent Dom Moore, founder of the Headland Hotel’s Surf Sanctuary, who not only got me back on a surf board for the first time more than 10 years but made sure I caught as many waves as possible before exhaustion set in. 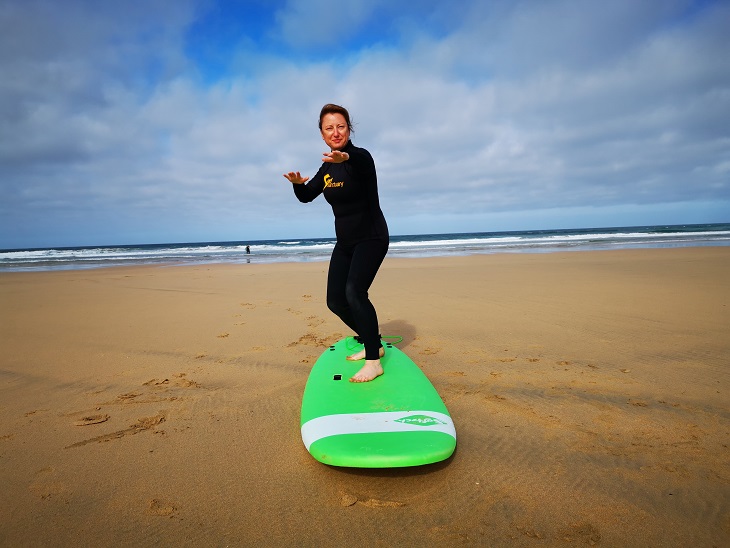 Getting some practice in before going in for the real thing

Dom was a great source of information about the local area and its history and how to find great surfing spots so whether you are a beginner, a rusty surfer or want to get to the next level of surfing then I would definitely recommend an hour or two with him on Fistral. It’s a great way for all ages to blow away the cobwebs and I was buzzing after my lesson. While my previous surfing experiences have usually ended trying to get changed in the open air and freezing half to death, the luxury of surfing at the Headland hotel was that I could just pad back to my room and enjoy a steaming hot bath with view of the very waves I’d just been tackling.

Just one night here felt like an entire break and it will be just what the doctor ordered after weeks of lockdown. Fingers crossed reopening goes ahead as planned – the Headland hotel says it is ‘so looking forward to welcoming our guests back when it is safe to do so.’

Hotel information and how to book The Headland Hotel

The Headland Hotel and spa is a member of Pride of Britain Hotels collection which can be contacted at www.prideofbritainhotels.com and 0880 089 3929.

Book The Headland at Booking.com

Visit The Headland hotel on Tripadvisor

If you like hotels on the British coast then you’ll love: Cornish spa delight at Mullion Cove, Cornwall; A seaside stay on the Suffolk coast at The Brudenell, Aldeburgh; A room with a sea view at Thurlestone hotel, south Devon

One thought on “The Headland hotel Newquay: luxury spa stay in Cornwall”