There are probably many historic hotels with a spa and swimming pool but I don’t think many of them can say they have their own moat, which makes New Hall hotel and spa in Sutton Coldfield, just a few miles from the centre of Birmingham, a rare hotel indeed.

It’s not just any old moated hotel though – New Hall hotel is actually reputed to be the oldest listed inhabited moat house in England. Dating from the 13th century, the manor house has over the centuries been a school, a hunting lodge, a private house and is now a luxury hotel owned by Hand Picked Hotels group – whose Brands Hatch hotel I reviewed last year. 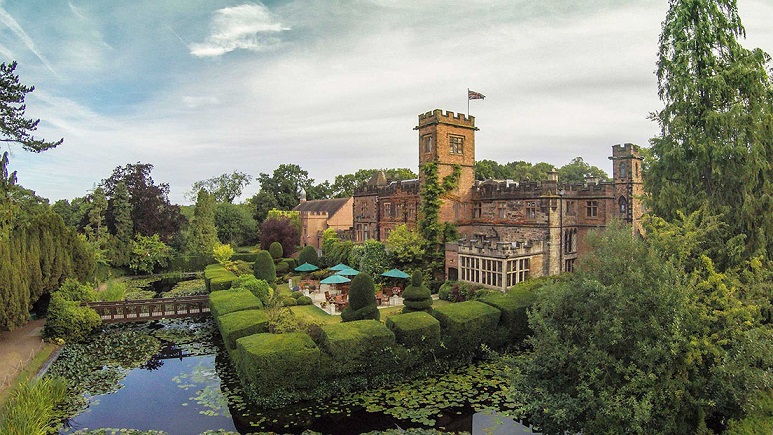 The reason for my visit was to take part in New Hall hotel’s Peaky Blinders murder mystery dinner – how appropriate, to have a Peaky Blinders-themed dinner in Birmingham, home of the Shelby family! – but sadly that was cancelled at the last minute. However while this was disappointing, it did mean we had more time in the spa so, every cloud… 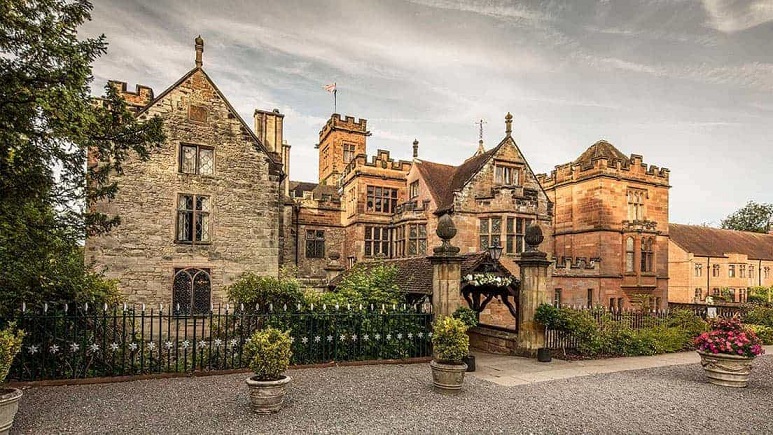 The impressive historic building which greets you as you arrive at New Hall hotel. I shot straight over the moat bridge to find myself in the wrong part of the hotel…

Set in 60 acres and with 60 bedrooms, New Hall hotel is an impressive sight and I was so enchanted with the moat – yes, it’s a real moat, surrounding the hotel – that I walked straight across the bridge and into what turned out to be the side entrance of the hotel. However once I finally found my way to reception I was greeted with a warm welcome, rapid check-in and shown to my bedroom on the first floor. Named Sacheverell, the room was unexpectedly vast. Immediately inside the door was a lobby containing fitted wardrobes, a fridge stocked with water and fresh milk, a kettle, a coffee machine and all sorts of teabags and coffee pods. 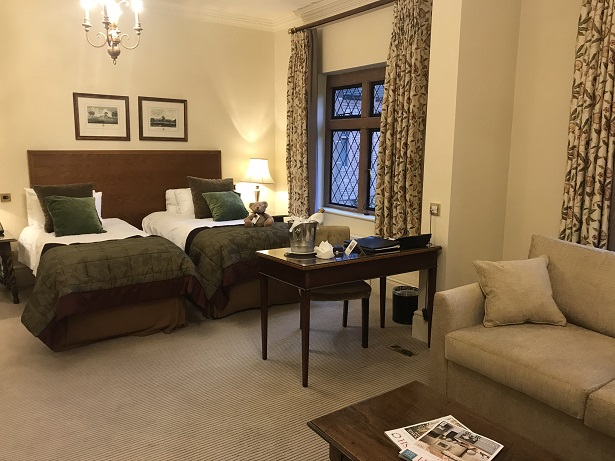 Our bedroom at New Hall hotel, Sacheverell, was really large, with a huge lounge area. There was also an entrance hall and a very smart bathroom 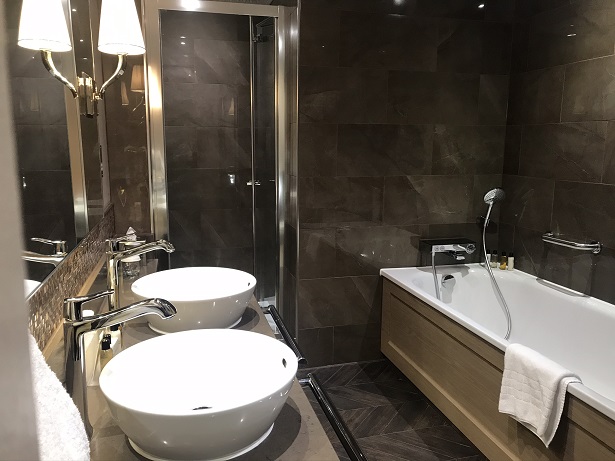 The modern bathroom in our hotel room 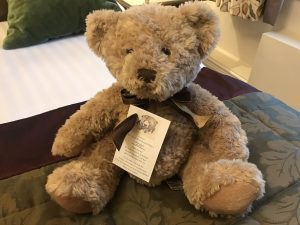 Our room bear, Warwick, could be left outside our room if we didn’t want to be disturbed (we couldn’t bring ourselves to send him outside though)

The bathroom was extremely modern, with twin sinks, a bath and separate shower all done up in smart black marble, and lots of toiletries and towels. The bedroom itself was an impressive size, with twin beds as requested, a desk, sofa, chairs and Smart TV. Watching over the room was Warwick, the hotel’s teddy bear, who could be placed outside as a ‘do not disturb’ sign. There was an abundance of plug points (if none by the main mirror which is often the case) and views of the all-important moat through mullioned windows.

You’ll love these other historic house hotels too:

The spa at New Hall hotel

We headed straight for the spa which is in the gardens just behind the hotel (you can walk over there in your fluffy robes) and went straight in for head and shoulder massages; 25 mins of sheer pampering. There is a well-equipped gym at the spa but in our blissed-out state we headed straight for the poolside loungers and remained there for the afternoon, moving only to try out the jacuzzi, steam room and sauna. 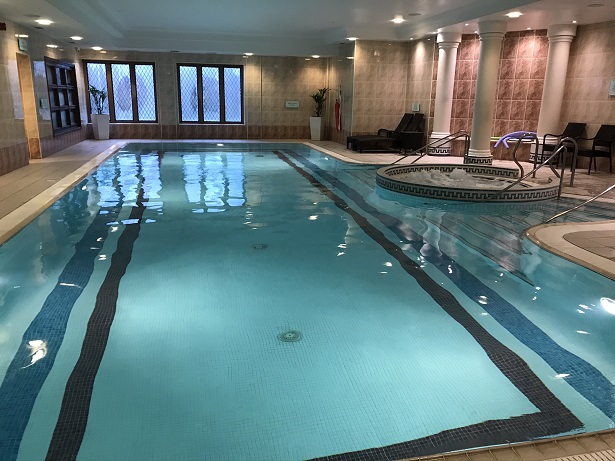 I had the indoor swimming pool at New Hall hotel to myself in the morning – there is also a jacuzzi, steam room and sauna 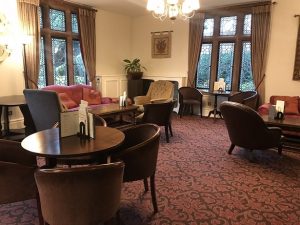 The cocktail lounge at New Hall hotel and spa

Staff were friendly and attentive – even topping up a manicure for free – and we spent so long in the spa that we had to move our dinner back an hour and forgo cocktails in the bar beforehand. Walking through the bar on the way to the dining room however, it didn’t seem like a loss – the bar area and neighbouring lounge felt a little soulless for such a historic hotel filled with atmosphere. However in the summer things would be much improved as the bar opens out onto a large patio garden so you could have your cocktails in the sunshine.

The restaurant at New Hall hotel 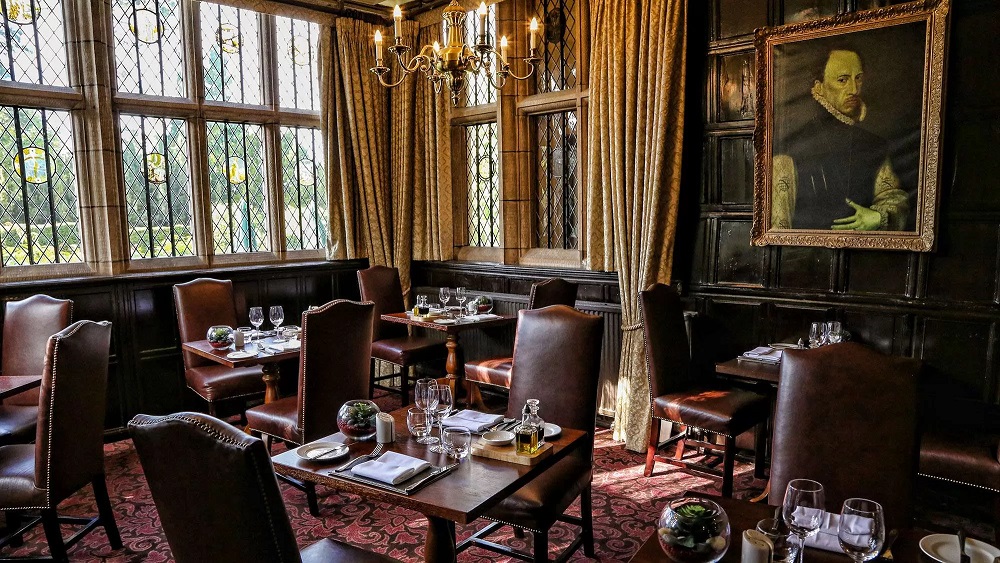 A corner of the dining room at New Hall hotel (hotel’s own pic). The guy in the portrait is definitely green… 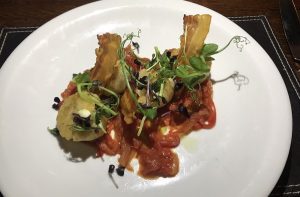 My starter of South Coast scallops

The dining room itself was cloaked in oak panelling and was certainly a unique room (with some rather odd paintings – the guy overlooking our table was positively green) and more could have been made to make it more inviting: better lighting perhaps, lighter carpet and curtains, but it was impressive and the food and service were both good. We started with Brixham market mackerel and seared South Coast scallops, before moving on to the pie of the day (lamb). The pies were huge, hearty and nuclear-hot and came with gravy and mash, and it was only by sheer will-power that we able to fit in a slice of treacle tart afterwards. 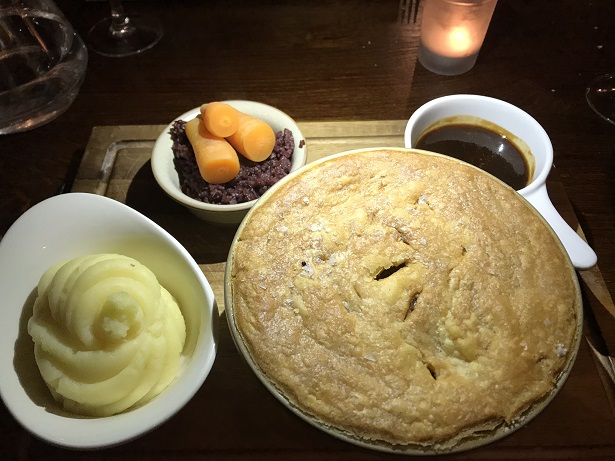 My lamb pie with gravy and mash

The gym at New Hall hotel

It was probably the sheer quantity of food that persuaded me to hit the gym first thing the next day. I had the place to myself which is always a treat and pounded away on the treadmill until I was joined by a ten-strong crowd of people warming up. It turned out this was a regular fitness session and I was kindly asked if I’d like to join them, which was a pleasant hotel first. However I wanted to fit in a swim before breakfast (I also had the pool to myself which was bliss) so declined and headed off to do a few laps while they started doing an impressive number of crunches. 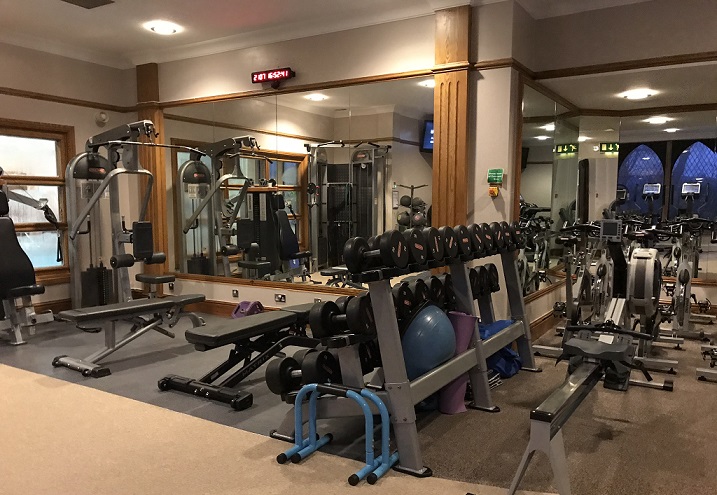 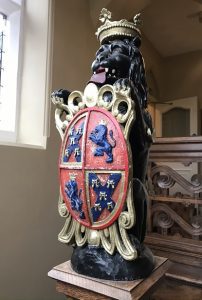 Breakfast at New Hall hotel and a historic tour

After my fitness blitz I felt able to tuck into breakfast and loaded up on fresh fruit and yoghurt before smoked salmon and scrambled eggs – and lots of excellent hot coffee served by yet more cheerful staff. However the highlight of our stay was an excellent tour of the older parts of the building (I highly recommend you ask a member of staff if you can do a tour during your stay – it would have been awful to have missed out).

We not only saw some lovely bedrooms including the gorgeously cosy Sirius in the very eaves of the hotel and admired the ornate staircase carvings (right) but loved the 500-year old Great Chamber, an impressive room with original oak panelling, its colourful Elizabethan ceiling and even some diamond-scratchings on the leaded windows, thought to be carved by the love-crossed George Sacheverell: cheerful thoughts such as ‘In death I shall find the peace that life will deny me.’ 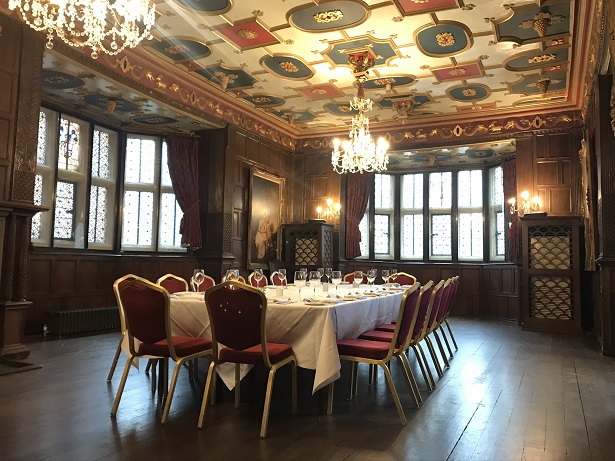 We finished our stay with a walk around the gardens and discovered not only a tennis court and conference pavilion but more great views of the hotel’s moat (cue a million more photos). 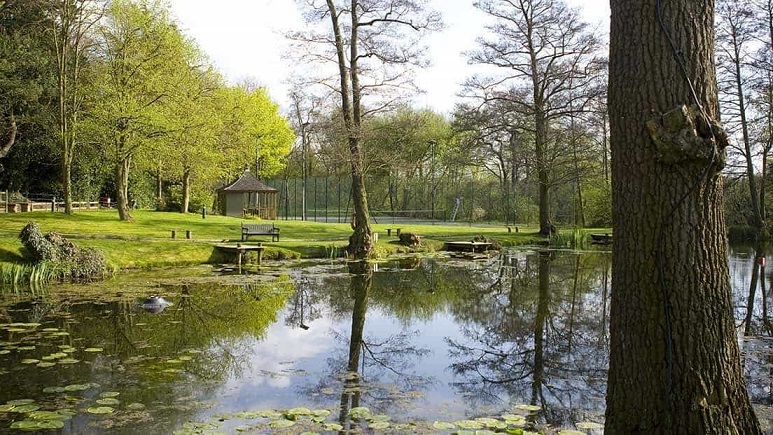 Reception will happily give you a handy print-out of the walking routes around the hotel grounds and local area, and in case you need even more reading matter, a detailed history of the hotel and even a list of the New Hall ghosts (there are several). In fact, the helpful attitude of all members of staff was the icing on the cake for this memorable stay: you might come for the moat (or the Peaky Blinders) but it’s the little touches you’ll remember. Just don’t forget to ask for a tour, else you will really miss out.

Rooms from £106 per night for a midweek Classic Double, going up to £165 for a Junior Suite at the weekend

If you are interested in more hotels in the Hand Picked Hotels collection then you’ll love these luxury hotel reviews… Luxury after lockdown: a Covid-secure stay at Fawsley Hall, Northants; Relaxing in the slow lane at Brandshatch Place hotel and spa

If you liked my review of New Hall hotel near Birmingham then why not Pin It? 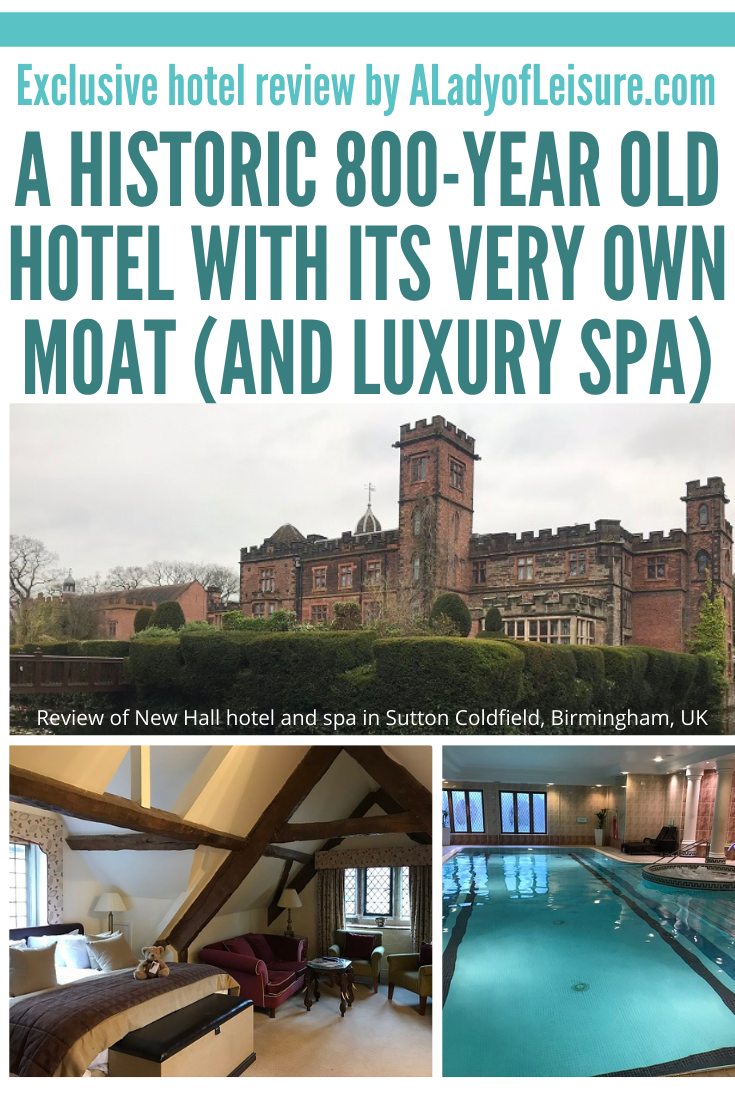