If lockdown has left you feeling in serious need of a relaxing break with country walks, a first-class spa and restaurant and cosy rooms to hide away in, then, once we are allowed to stay in hotels once more, Bailiffscourt hotel and spa is the place for you.

Tucked away down a little country lane on the south coast between Littlehampton and Bognor Regis, Bailiffscourt hotel and spa is a little haven of calm, surrounded by green fields and just a short stroll from the sea at Climping beach. 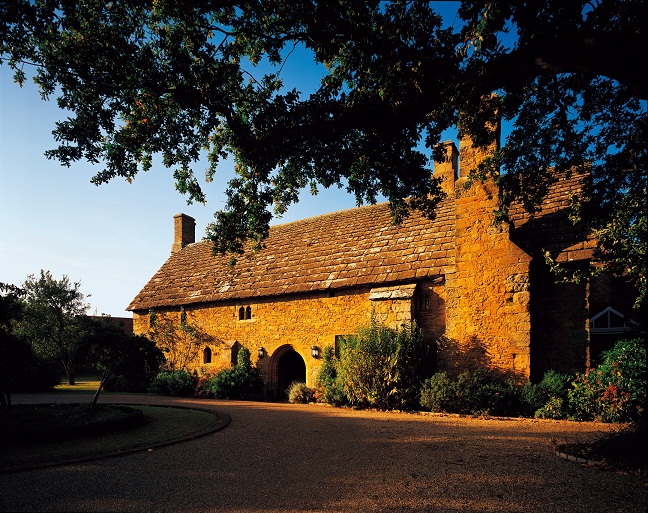 Built in 1927 in the medieval style for Lord Moyne, who was then Walter Guinness of the brewing family, and his wife Evelyn, architect Amyas Phillips reportedly searched the country for original stone, woodwork, doors, windows and fireplaces which give the hotel its 500-year old feel.

There are two more hotels in the Historic Sussex Hotels group – check them out below!

There are low ceilings and tapestries and winding staircases and narrow corridors and a whole rabbit warren of rooms downstairs which all make you feel as if you have gone back in time. Thankfully the service, food and essentials of life (such as bathrooms) are all very modern, so what you get at Bailiffscourt hotel is an old-fashioned country house atmosphere from a building which has actually been a hotel since 1948. 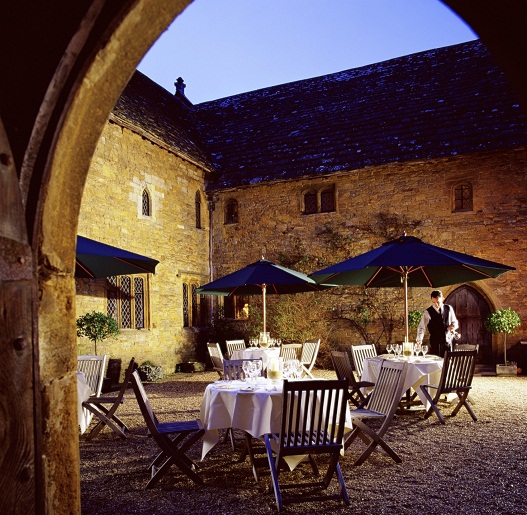 There are nice little touches too, such as board games and magazines dotted around the place, a map showing local walks and even a tiny bar. We arrived just in time for Sunday lunch, and were served a lovely meal of roast beef and roast lamb in the stone-walled dining room overlooking the courtyard.

Then it was time to see our room, the very grand Baylies Suites, which has all the aforementioned trappings of Tudor times including a massive timber vaulted ceiling, plus a wood-burning stove, cosy furniture and a huge bathroom with, rather unusually, two baths placed side by side. 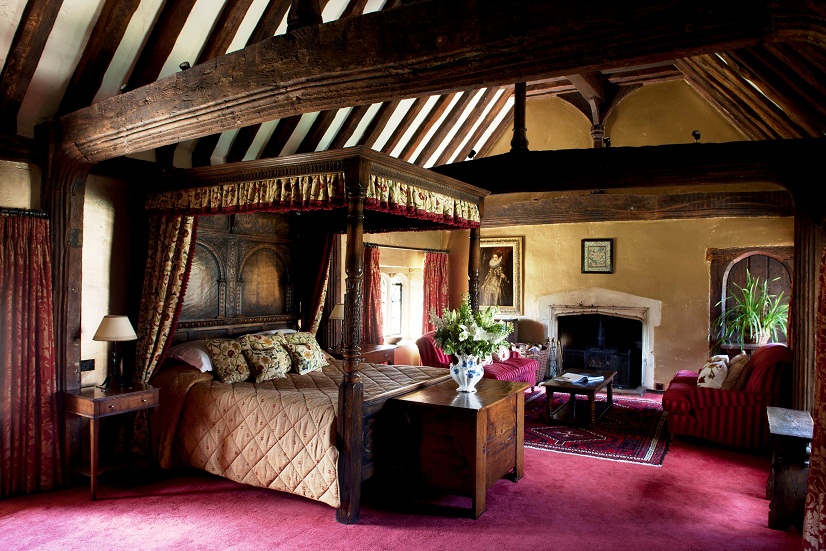 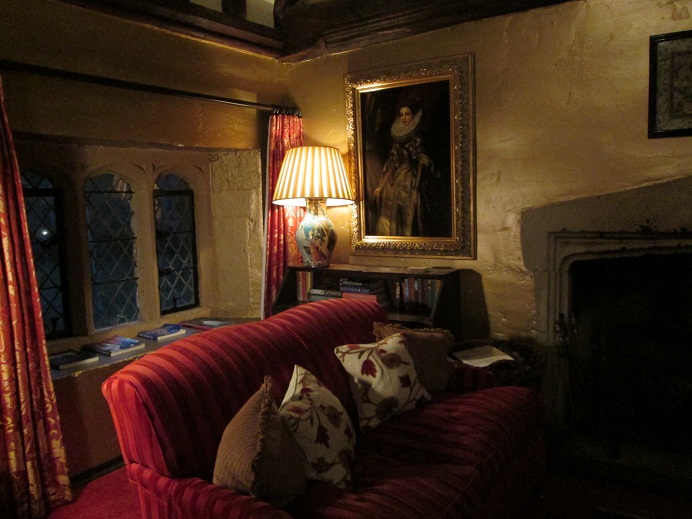 It’s cosy, Tudor-y and the perfect place to while away a wintry Sunday afternoon 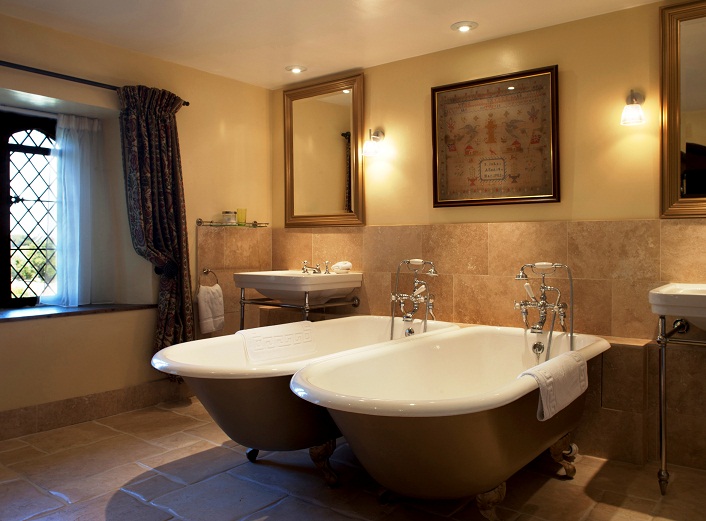 While bathe alone when you can chat to your neighbour?

The room with its thick curtains and atmospheric lighting would have been a very cosy and romantic place to spend a wintry afternoon. However there was no time to lounge around reading the Sunday papers; I had to scoot across to the spa building for a massage.

Spa at Bailiffscourt hotel and spa

The spa is as modern as the main building is medieval: there is a decent-sized indoor pool and jacuzzi surrounded by glass walls, and a heated outdoor pool and hot tub. I had chosen a Mediterranean sea massage, mainly because it sounded so different from anything I’d tried before. 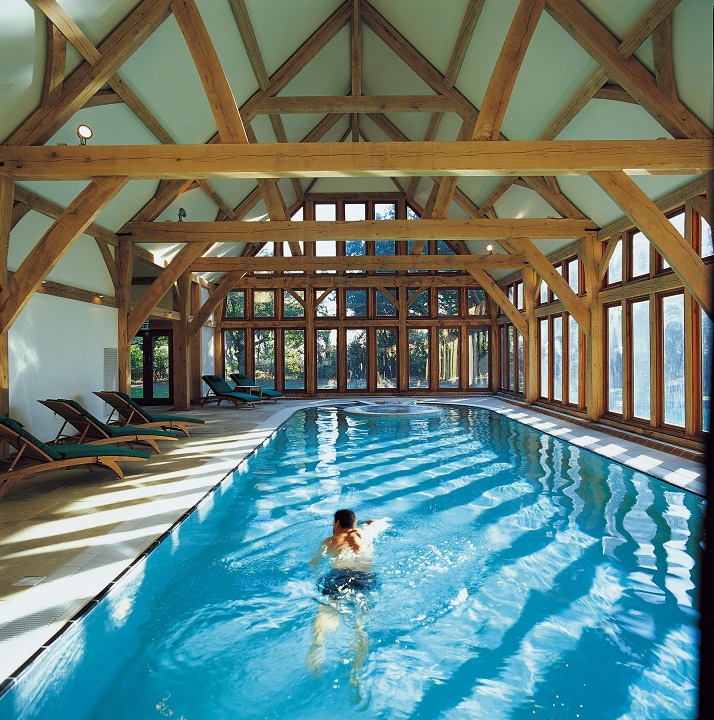 Instead of lying on a hard bed and turning over halfway through, you lay face up on a full-length heated water cushion and were massaged while floating on this semi-water bed. It sounds bizarre but was incredibly relaxing and I left feeling so relaxed I had to lie on the loungers by the swimming pool for a while before I could summon up the energy to get dressed and back to my hotel room.

The spa is popular with hotel guests and local residents alike and swimming in the heated outdoor pool the following morning in the icy December air was a great way to start the day. 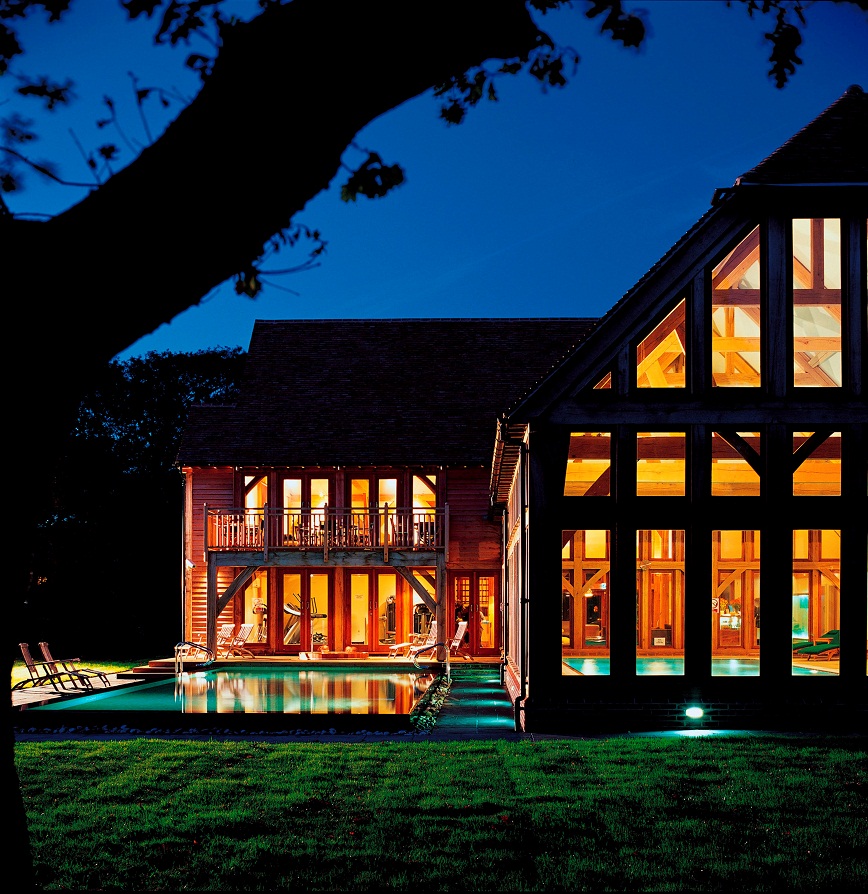 The spa has both indoor and outdoor heated pools

By the time I headed back to the main building the sun had set and it felt as if we were miles away from anywhere, and therefore perfectly positioned to have a very indulgent dinner before a lengthy sleep in our four-poster.

The restaurant at Bailiffscourt

We had poached duck egg with artichoke puree, chargrilled ciabatta, wilted spinach and wild mushrooms, and grilled scallops with cauliflower puree, chorizo, sprout leaves and dill buttered baby squid to start (the scallops had a £4 supplement) – both were very tasty. 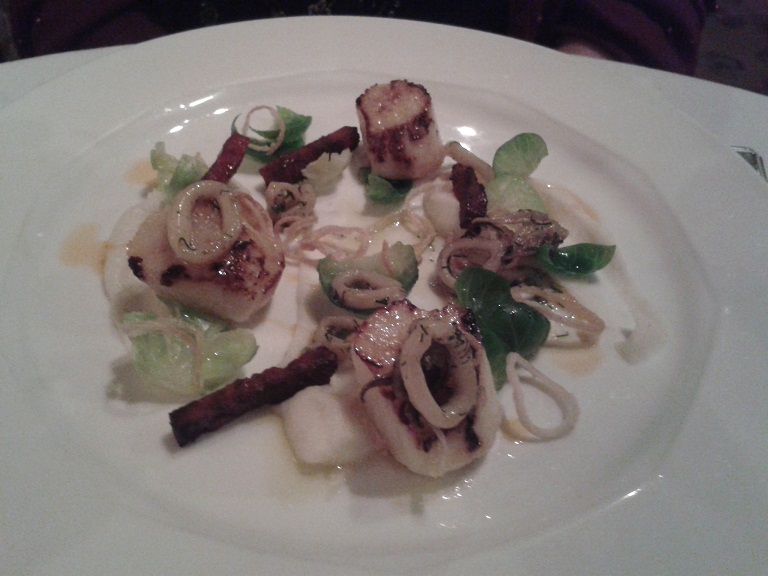 We then followed with roasted red leg partridge with caramelised onion puree, wild mushroom pithivier (aka pie), polenta chips and truffle jus, (there was a roast duck option with a £6 extra charge) and from the chef’s menu I chose the grilled fillet of John Dory, artichoke puree, baby spinach and quail’s egg. 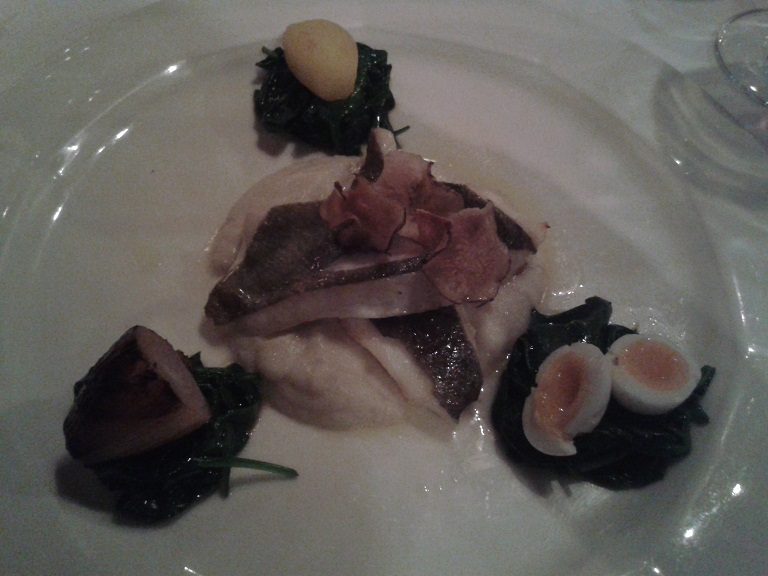 We finished off with the blackberry, apple and almond frangipane tart and drank the other half of the bottle of red wine we had saved from lunch. Even so, that meant in just two meals we had already spent well over £200 without counting the cost of accommodation, which might make Bailiffscourt for special occasions rather than a regular treat. 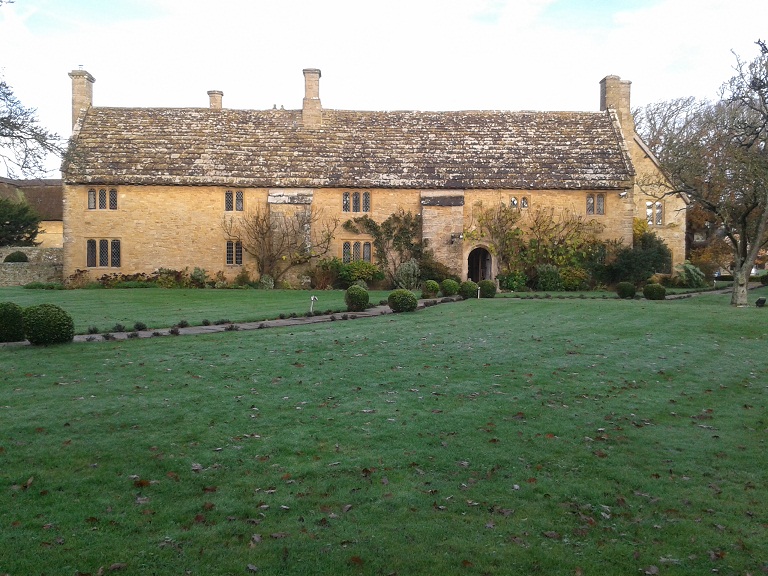 Bailiffscourt is set in 30 acres of countryside 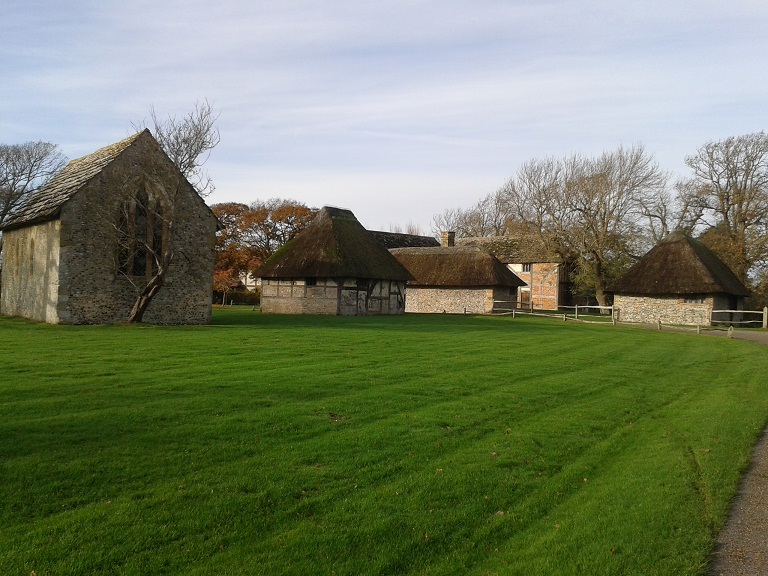 Several buildings make up the Bailiffscourt experience, including a chapel and suites away from the main building

Exploring the grounds and Climping beach

Set in 30 acres of countryside, the hotel building itself is surrounded with other buildings, such as the tiny chapel, granary and dovecote. One of the pleasures of Bailiffscourt is to be able to walk through the grounds and past its lake to Climping Beach which on a Monday morning was completely deserted and quite beautiful.

There are tennis courts for the more energetic, and while the hotel in its rural calmness down a quiet country lane feels as if it is a million miles away from the rest of the world, the beautiful town of Arundel is just a short drive away. 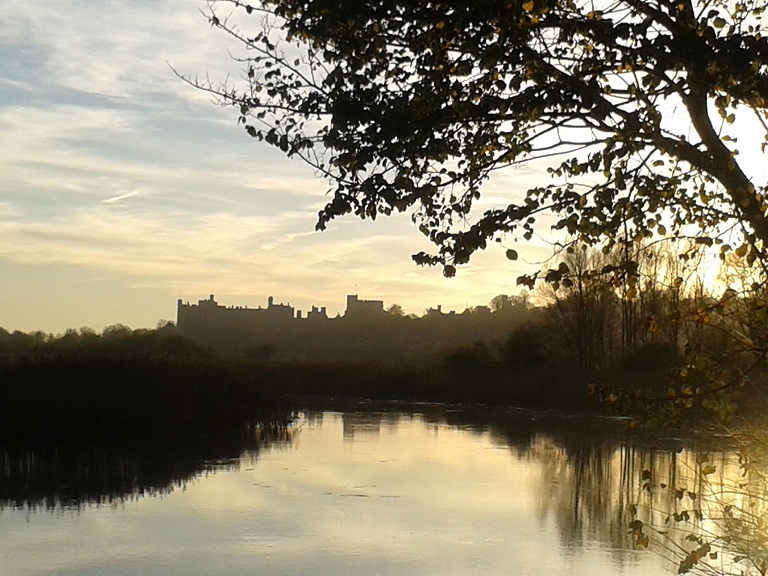 The silhouette of Arundel Castle overlooking the river Arun

Bailiffscourt is a member of the Pride of Britain Hotels group.

If you would like to read about other hotels in the excellent Pride of Britain Hotels group then check out these great reviews; A memorable stay at The Vineyard near Newbury; Whatley Manor, a Cotswolds gem; Bovey Castle in North Devon, a friendly, luxury, historic stay