Home / Food and drink / Curry, bagels and fish and chips on a memorable London food tour

In just four hours I ate curry, fish and chips, stilton cheese, salt beef bagels, bread and butter pudding, salted caramel cheesecake and a bacon sandwich. With ketchup. Why? You might well ask. It was because I had decided to be a tourist in London for the day. And my day was all the better for it. 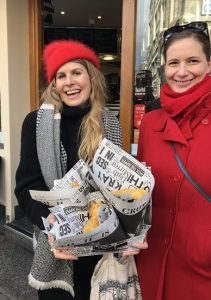 Our excellent guide Flic with a happy tour participant and a handful of portions of fish and chips – one of our many food stops!

Our London food tour started off near Liverpool Street station in Spitalfields market which began began trading back in the 13th century. The market operated for more than 700 years until the 1990s when it moved to larger premises in Leyton, east London and the building itself became a rather run-down collection of shops and sporting facilities (I used to play five-a-side football here!) Reopening in 2005 after a regeneration programme, Spitalfields is now a rather smart shopping and food area which still retains a hint of its original function.

I have lived and worked in London for most of my adult life and yet I found the four-hour Eating Europe food tour of London truly fascinating. Some of the places we visited I was familiar with, others not at all, and yet even the familiar places were given a new light as I discovered there is a big difference between walking through an area and actually getting to know it by hearing its history and eating its food.

That was another unexpected element about the tour: I thought it would just be about the food but our fabulously enthusiastic and well-informed guide Flic told us all about the history of each area so I came away much fuller in both food and local knowledge. 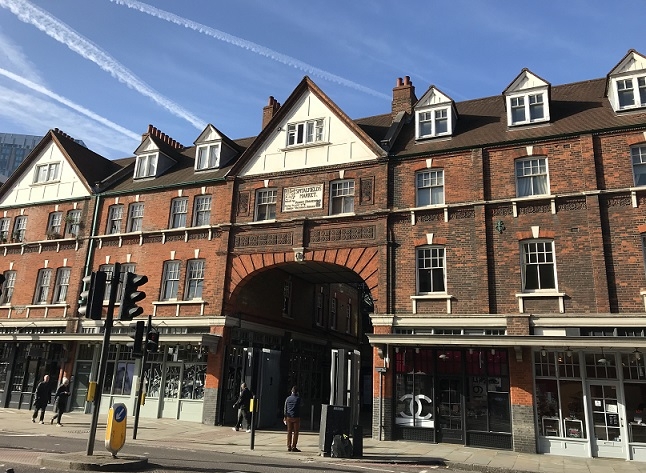 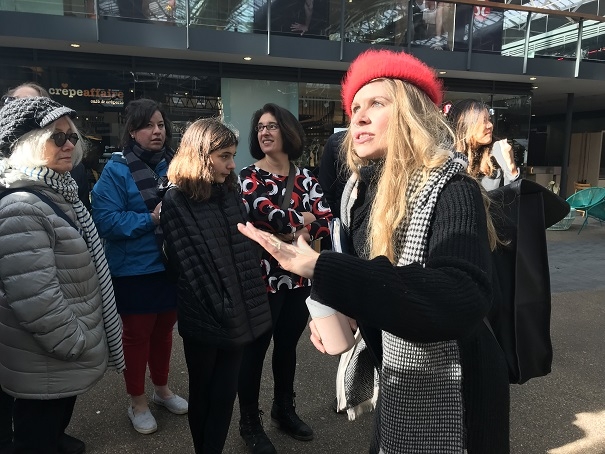 Our enthusiastic and informative guide Flic in full flow

Passing by the Ten Bells pub where Flic informed us ‘Jack the Ripper drank here and scouted for his future victims’ we headed up Commercial Street to notable chef Fergus Henderson’s restaurant St John Bread and Wine. 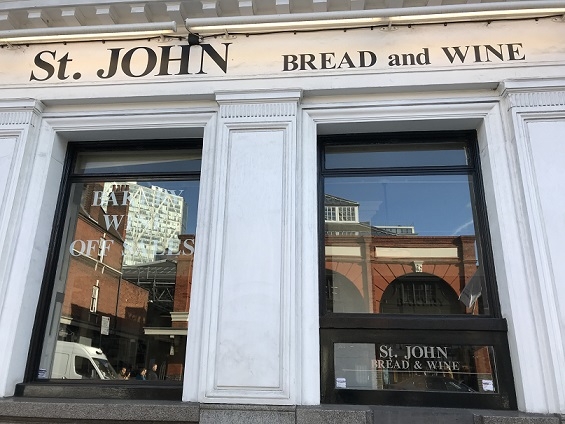 The chef himself was sitting at one of the tables having a morning meeting but our group of 12 shot straight past him to sample his famous bacon sandwiches, made from Gloucester Old Spot bacon with his special home-made tangy tomato relish. 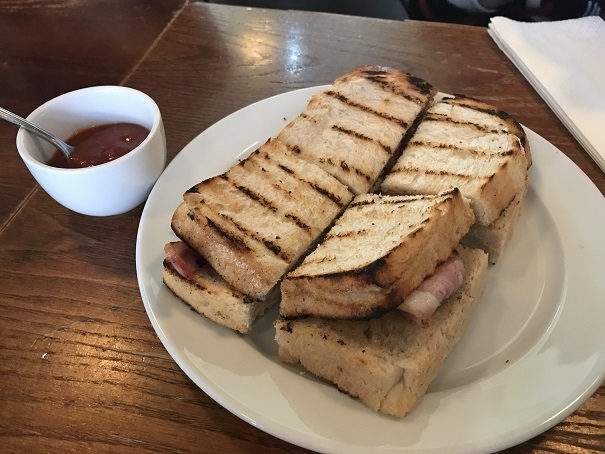 We were a mix of ages from 20s to 60s and seemed a mix of mainly Americans and Brits from outside London and had differing approaches to the food: some were happy getting stuck in while others were more cautious and paced themselves. ‘There’ll be a lot of eating ahead,’ warned one. 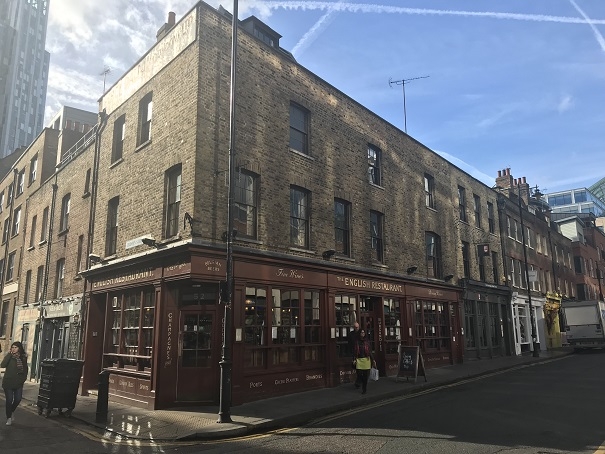 This turned out to be true and yet no-one was complaining. Less than a minute’s walk from St John Bread and Wine was the next stop, The English Restaurant, which opened in 2001 but which was in a building dating back to 1760.  I had walked past it hundreds of times and barely registered its presence. 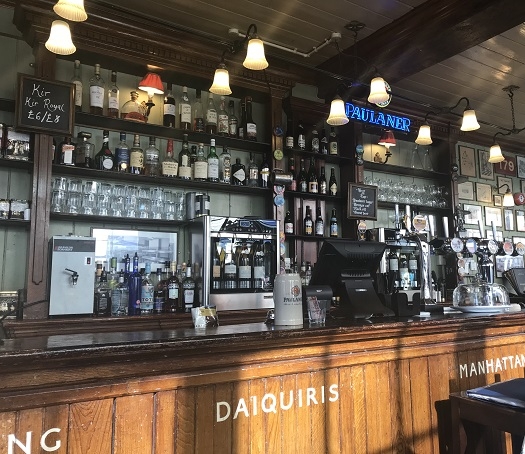 The traditional wood-lined bar at The English Restaurant

Inside it is cosy and traditional, with a long wooden bar, wooden oak flooring (salvaged from nearby Christchurch, Spitalfields) and tiny little tables to cluster around for afternoon tea, or, in our case, bread and butter pudding, that most traditional of English desserts. 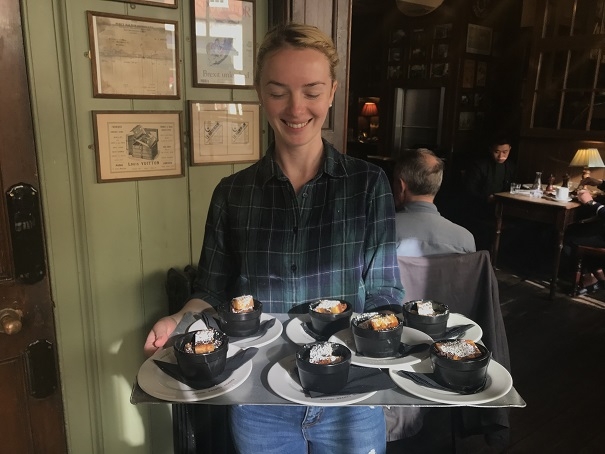 It’s only our second stop and we’re already on dessert: a tray of very traditional bread and butter puddings arrives… 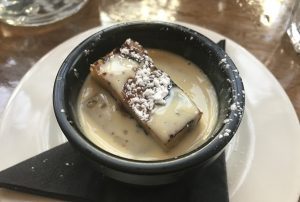 The piping hot sweet little dishes were slightly odd to have straight after a breakfast butty, but were wolfed down nonetheless and fueled the short walk to our next stop, the Soup Kitchen for the Jewish Poor. 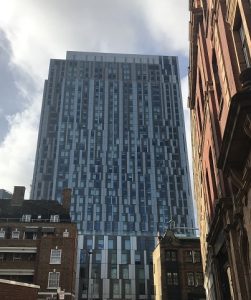 Soup Kitchen for the Jewish Poor

Now upmarket apartments, the building which still has its original facade, was founded in 1854 to supply soup, bread and meat twice a week to poorer remembers of the Jewish community and was feeding 1,500 people a week in the 1950s. It closed in 1992 but is a striking juxtaposition between the historic flats on the other side of the road and the gleaming skyscrapers of modern London.

This part of London is endlessly fascinating, where run down terraces and historic churches lie cheek by jowl with bright steel skyscrapers and million-pound apartments and Flic was able to show us tiny details I’d never spotted, such as the cast-iron floor roundels embedded in the pavement showing apples and pears to mark Spitalfields market history. 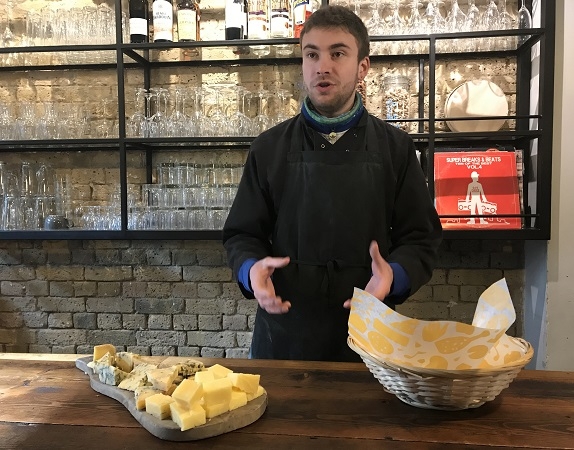 A quick talk from one of the staff members of Abondance cheese shop before the sampling begins – bring on the cheddar and stilton!

It was time for cheese and where better than Abondance, a modern French-run fromagerie where we were given some excellent cheddar and stilton and were told about Abondance’s passion for British cheese (and French, and from all across Europe). [Update: sadly Abundance has since closed] The shop and cafe was founded by Parisian brothers Alex and Leo Guarneri after they had worked in various culinary outlets such as Paxton and Whitfield and Androuet and not only is a great addition to the Spitalfields foodie scene but also supplies top London restaurants. 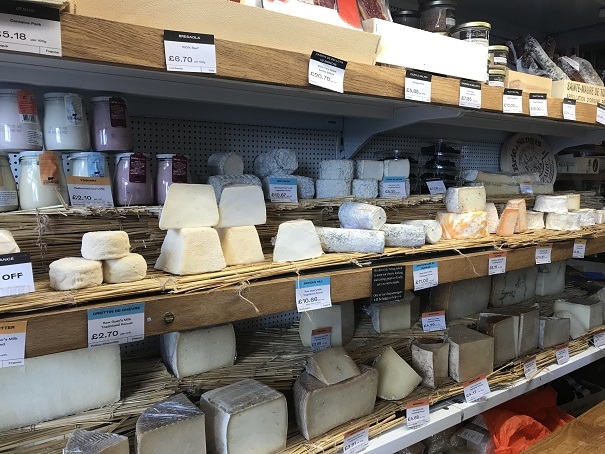 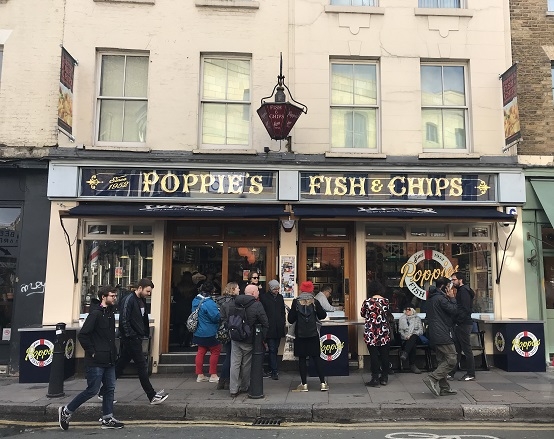 Fish and chips might not be obvious after cheese but that’s where our eclectic diet took us, round the corner and back in time to local landmark Poppie’s Fish & Chips, founded in 1952 and former winner of the National Chip Shop awards.  Poppie’s interior is a mix of hectic – the frantic frying behind the counter – and the traditional, with its walls covered in a mixture of pictures of local scenes and celebrity fans. 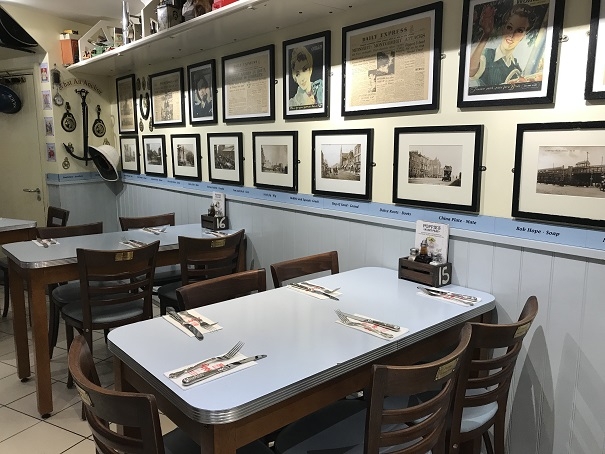 We choose to eat our freshly battered fish ‘n chips outside, eating them out of paper styled in the traditional newsprint (newspapers no longer being an acceptable serving dish) and smothering our food in tartare sauce and vibrant green mushy pea sauce. 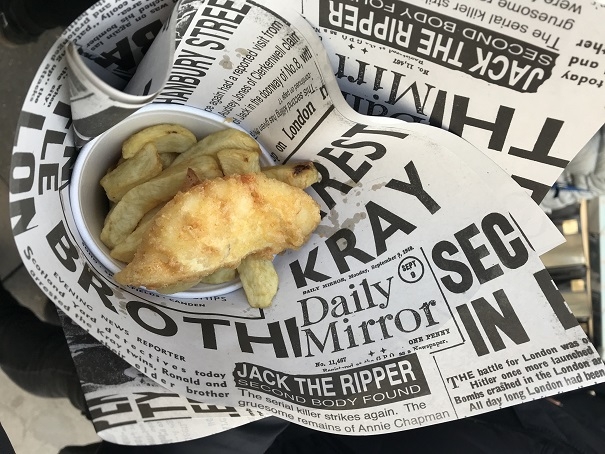 It was lunchtime now and the crowds were building up, keen for Poppie’s famous food, so we headed off to the quieter streets away from the market. Here the lines of terraced houses on Fournier Street and Wilkes Street date back to the early 18th century and were settled in by Hugenots (French protestants) who were fleeing persecution in their home country. With skill in silk weaving, the newcomers met with resentment from the established linen and cotton weavers in this area – the area’s cottage industry is remembered by little signs such as the door knockers in the shape of hands with lace sleeves – but any resentment now comes over house prices: a cottage on Wilkes Street cost £60,000 in 1997 and sold for £1.6 million 11 years later and prices for the area now top £3.6 million: Game of Thrones’ very own High Sparrow Jonathan Pryce lives here at number – well, that would be telling. 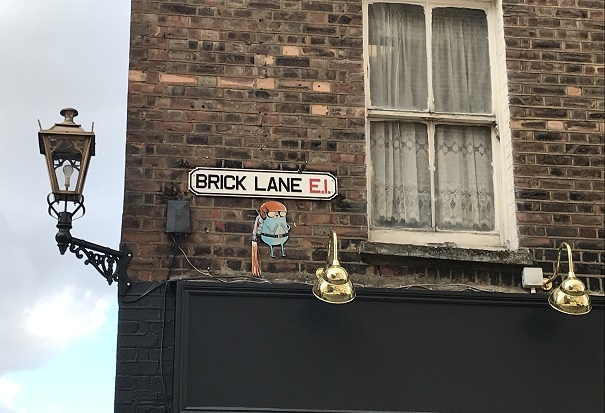 The famous Brick Lane in London 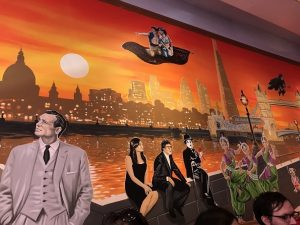 After admiring some local street art it was off to the world-famous Brick Lane, known for its Bangladeshi curry houses and Jewish bagel bakeries alike. Our ‘official’ lunch stop – even though we’d been eating pretty much non-stop all morning – was at Aladin, a Bengali curry house and inside, underneath some striking art depicting London scenes – James Bond standing next to a Banksy as the Queen strolled along Westminster Bridge – we worked our way through a hat-trick of dishes; a mild and sweet vegetable curry with cinnamon and cardomen;  a chicken tikka masala with 14 different spices and an even spicier lamb Bhujon mince and cutlets (most of the food had been scoffed before I had a chance to take a picture!).

I’d been to Brick Lane many times before but never spent a great deal of time walking along it and was surprised how long the street is, and had never twigged how the Old Truman Brewery acts as an unofficial halfway point between the Bengali community and the former traditionally Jewish area, of which much has vanished but some landmarks still remain, such as the famous 24-hour Jewish bakery Beigel Bake. 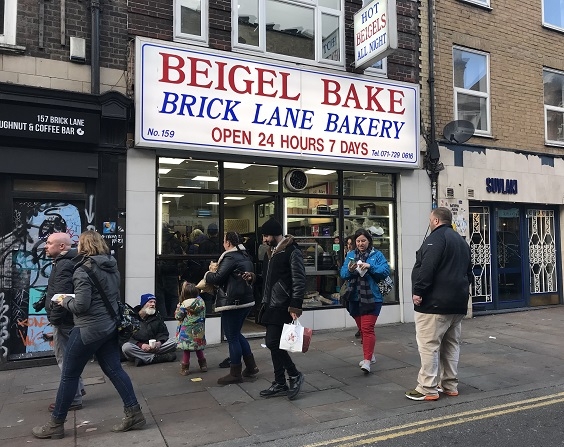 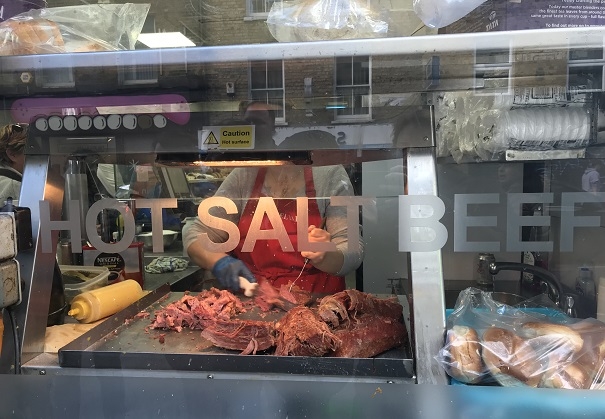 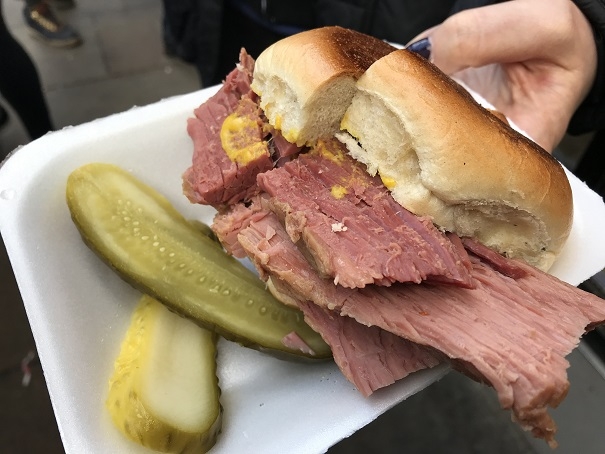 Flic warned us in advance not to call bagels ‘bay-gulls’ but ‘bye-gulls’ and we stood outside working our way through massive hunks of salt beef bagels while watching the queue snake out of the door and down the street. Impressively for such a renowned place the prices are still very reasonable for London and the portions were vast. We’d almost reached full food capacity by then so there was just one more stop – dessert. 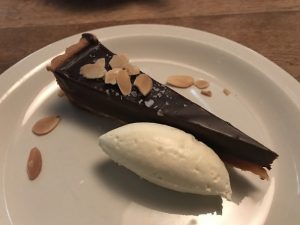 A few minutes from Brick Lane is Shoreditch Box Park – an innovative shopping mall composed entirely of shipping containers – and at the end of that is Pizza East, our final destination, an edgy-urban-design restaurant in a former tea warehouse which has exposed pipes and brickwork everywhere. There we wedged ourselves onto tiny stools under school dining room-style tables and miraculously found room for the excellent salted chocolate caramel tart.

There we slumped into our respective food comas while enjoying a semi-serious debate about which food stop we’d liked the most – I think it was a three-way tie between Beigel Bake, Poppie’s Fish and Chips and Beigel Bake, but every stop was someone’s favourite – and I for one resolved to try out more Eating Europe tours, both in London (such as its Twilight Soho food tour) and further afield: tours are available in Prague, Amsterdam, Paris, Rome and Florence.

I’m also going to try out many more touristy activities in my home town. Who know what treats there are in store?

If you like reviews of London hotels then check out: A Sherlock-worthy stay at Holmes hotel on Baker Street; A penthouse stay at nhow hotel, east London; Mayfair Townhouse off London’s Piccadilly; A luxurious five-stay at at The Stafford, Mayfair; Disco lights and a budget stay at Point A, Kings Cross; A relaxing luxury spa break at the five-star Corinthia hotel London; A stay at St James’s hotel and club: a suite and Michelin dining; One Aldwych hotel London: a Lion King hotel in central London; A puzzle on every floor at Holmes Hotel, Marylebone;