Enjoying the perfect Sunday roast at your favourite pub must surely be one of the weekend pleasures most missed during lockdown and here’s where restaurant kits can come into their own. While I’m counting down the days until the pubs re-open (and I’m sure I’m not the only one), hotel and pub company Fuller’s has launched its Fuller’s at Home Sunday Roast in a box, meaning you can enjoy a pub-style Sunday roast without having to traipse around the supermarket for hours first.

Restaurant kits have soared in popularity during lockdown and while many are from Michelin-starred restaurants – such as top Lancashire hotel the Northcote and its Gourmet Box – it’s refreshing to see Fuller’s getting in on the act. While Fuller’s are suggesting that its Sunday Roast box is the perfect restaurant kit for Mother’s Day, even if you are not able to celebrate Mother’s Day with your mum then having someone else take most of the hard work out of making a meal for four or six is a reason in itself to give it a try.

What’s in the Fuller’s at Home Sunday Roast box?

Each box, which is delivered straight to your door in a vast, chilled, insulated container, contains a three-course dinner, starting with Fuller’s London Porter smoked salmon from the Severn & Wye smokery, accompanied with sourdough bread and a tartare-style dressing made from soft-boiled eggs, capers, gherkins, herbs and mayonnaise.

The main course centres around free-range Norfolk roasted lemon and thyme chicken – Fuller’s aren’t doing non-meat options to start with but might do so in the future, so you could add a vegetarian main course of your own if needed – and comes with all the trimmings, including roast potatoes, pigs in blankets, apricot and chestnut stuffing, minted peas, honey and thyme-backed carrots, cauliflower cheese and, of course, Yorkshire puddings and gravy.

To finish with, the Sunday Roast ends with chocolate brownies and cream, and the box also comes with a bottle of English sparkling wine. 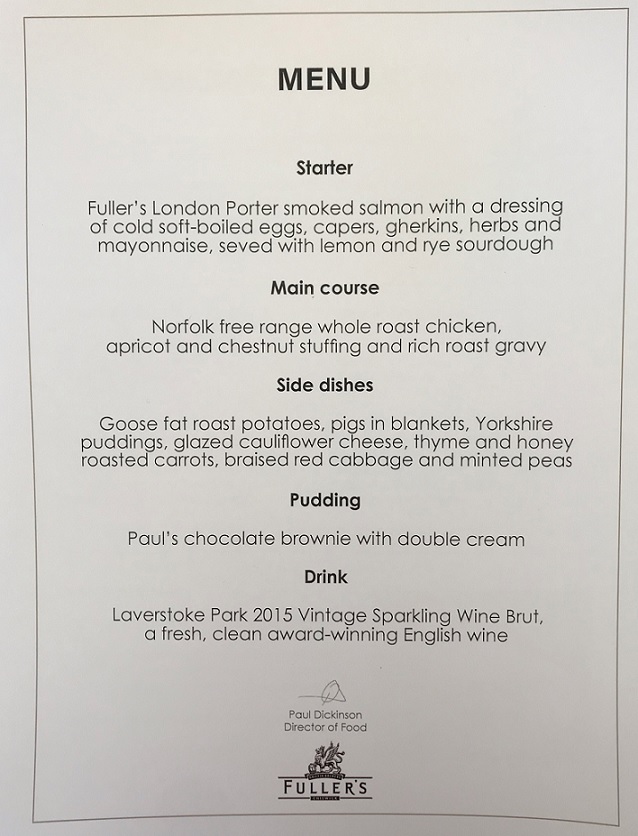 The menu for the Sunday Roast was substantial

The box arrived as promised on the Friday afternoon, giving me lots of time to check everything was there. 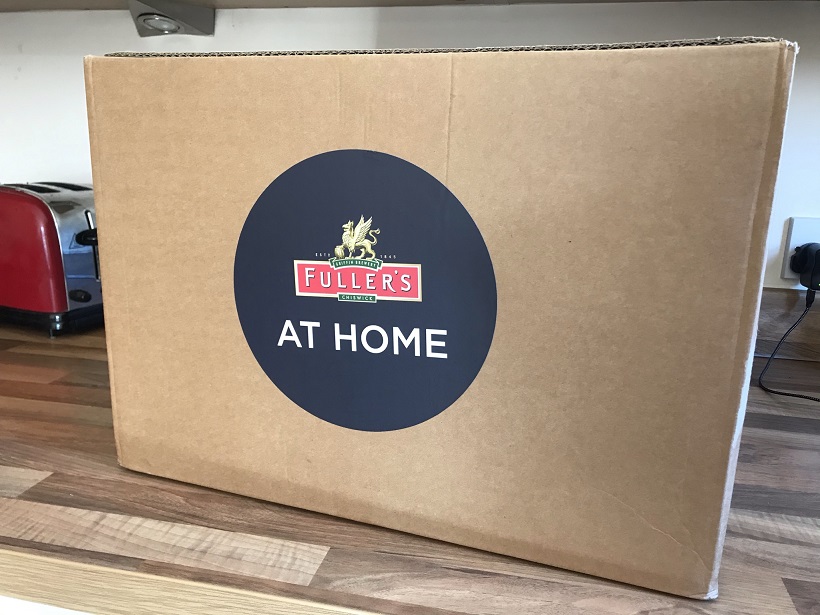 My first impression was – that’s a lot of food! My family and I were trying the four-person box and while we’ve all got healthy appetites, it certainly didn’t seem that we were going to be going hungry. The chicken was prepared in two separate packages, legs and breast done separately, and sealed in plastic having been cooked for four hours sous-vide so it would just need to be finished off in the oven.

All the items in the restaurant kit were clearly labelled

All the items in each course were clearly labelled and in a variety of tubs, pots and bags so that unpacking it all was like unwrapping a very foodie Christmas gift.

Everything which needed to be chilled went straight into the fridge and there was nothing else to do except be grateful that I hadn’t had to lug everything back from the supermarket and that all the preparation had been done for me. Only one thing was confusing me – what were the two avocados for? 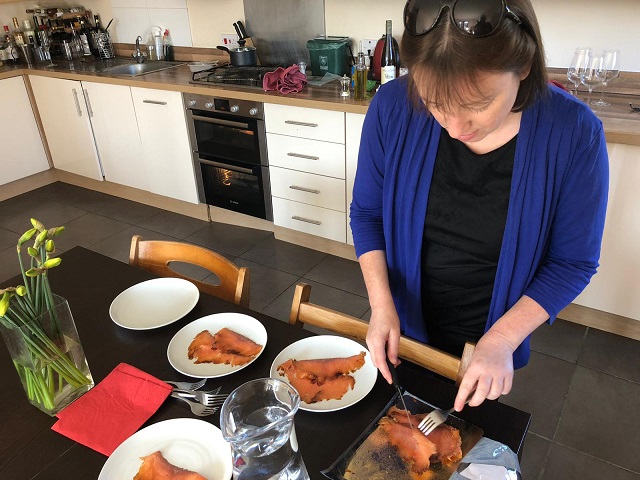 Lockdown fatigue had well and truly settled in by now and simply having a variation to the usual daily routine was a delight in itself. For non-cooks, the instructions are very clear and there’s even a QR code linking to a video of chef Brian Turner putting it all together. 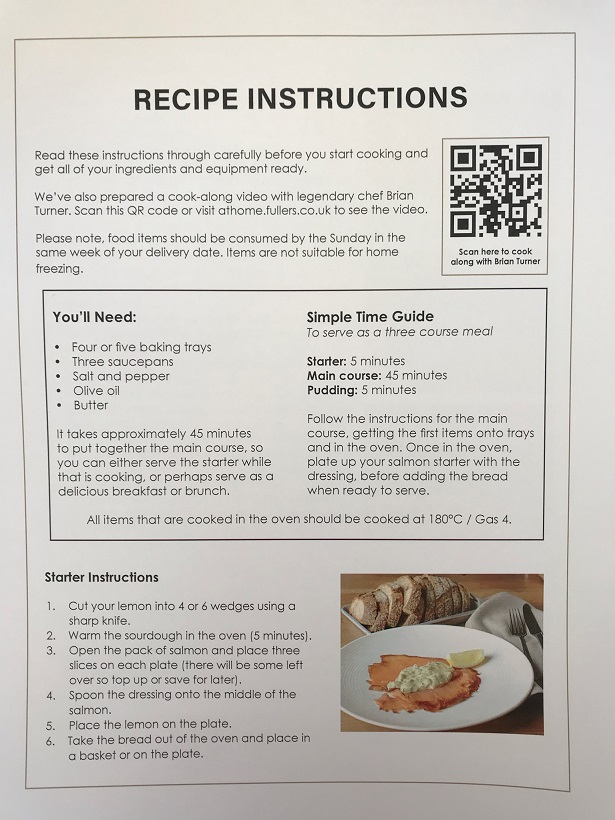 I skipped the video and dived right in. The longest course to prepare was the main course at 45 minutes, so the oven was heated and the chicken crown and legs were unwrapped and placed in a roasting tray, drizzled with olive oil and seasoned.

The potatoes were next, and then I just placed the pigs in blankets, cauliflower cheese and stuffing in their cardboard tubs on a baking tray and put them in the oven too. After 15 minutes the carrots went in too. 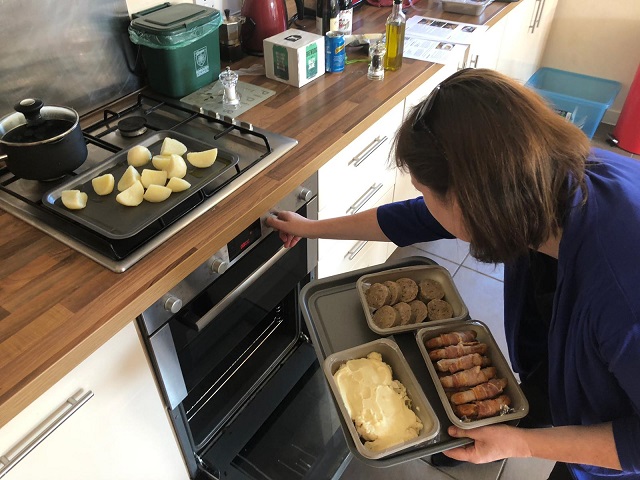 At this point, it seemed like a good idea to open the sparkling wine and prepare the starter, which was just a case of unwrapping the smoked salmon and sharing it between four, heating up the sourdough and then placing the caper sauce in a bowl (they recommend you dollop it in the middle of the salmon but there was such a lot it seemed sensible to let people help themselves).

Once the chicken was done it came out of the over to be wrapped in foil and rest while the gravy, minted peas and braised red cabbage were heated up. Finally the Yorkshires were heated for five minutes and then we were all set.

Preparing dessert was just as simple – the brownie tray went into the oven (I divided it afterwards but it could have been cut beforehand) and the cream was stirred into a jug. Simple. 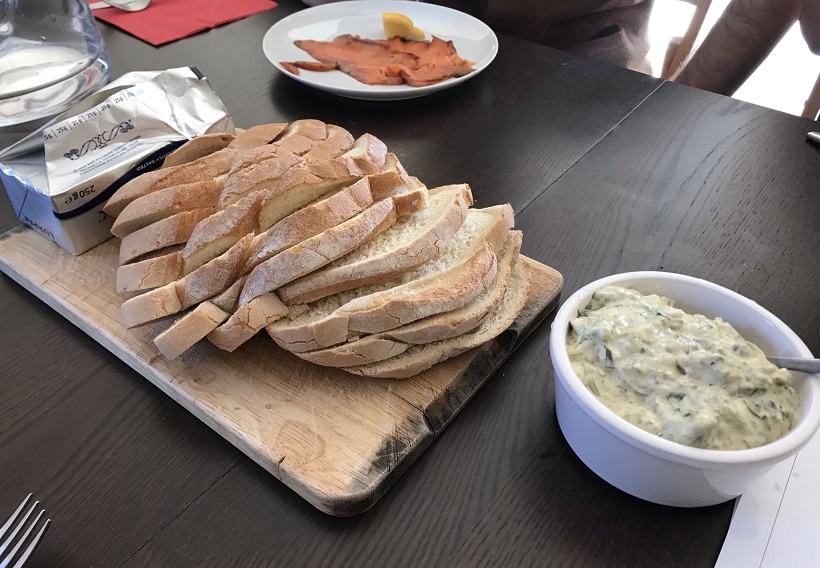 This was my first experience of a restaurant kit to try at home and I was really impressed. The food itself tasted excellent and definitely a plus point of having a proper chef prepare things was all the additional herbs which went into the food such as the chicken, carrots and peas which I might not have bothered with if making it from scratch myself. The chicken was especially tasty and the gravy was as thick and rich as any decent pub Sunday roast gravy should be. 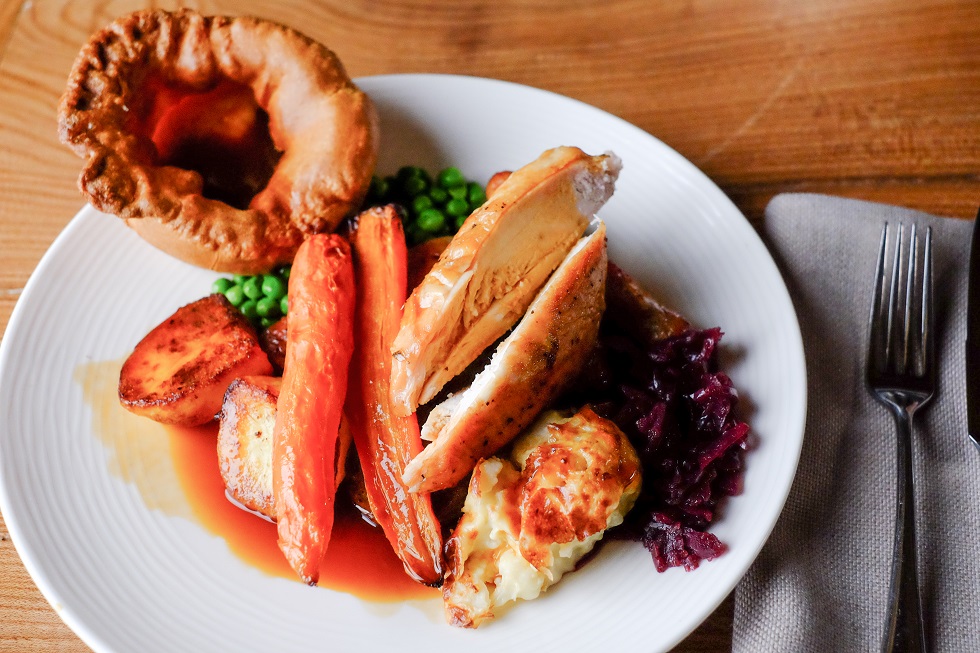 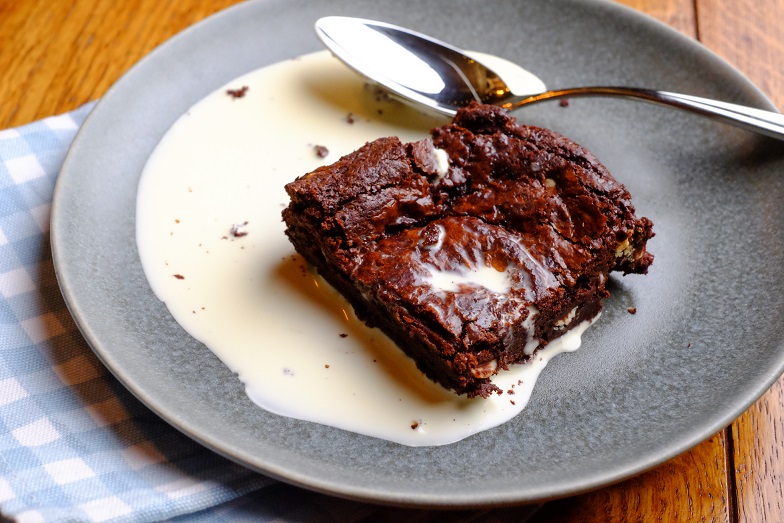 The meal was finished off with warm brownies and cream

The quantity of food was very good too – we ate like we’d been starving for days and there were still enough leftovers for me to enjoy the next day too. The only problem of having everything done for you, I realised later, was that I totally switched off as chef, so the roast potatoes were sadly neglected, ending up cooked on one side only. But they made a great top-up when we embarked on a round of seconds. The sparkling wine from Laverstoke Park was excellent too and much more opulent in taste than many sparkling wines which make the meal feel like a special occasion in itself.

The verdict – was it worth it?

At £120 for four, or £155 for six, Fuller’s at Home Sunday roast box compares well with having a three-course Sunday roast in a pub with a bottle of fizz in normal times (although you’re still left with doing the washing-up) and there was certainly no need to buy any more food to top it up – quite the reverse. Not only was it a welcome diversion from lockdown routine, it made for a very special Sunday and having everyone round the table talking about anything but Covid-19 was a treat in itself. Congratulations to Fuller’s for putting together such a good alternative when going to the pub itself was not an option. But I never found out what I was supposed to do with those avocados…

Check out this other restaurant kit reviewed on ALadyofLeisure.com: Restaurant kits to make at home – Northcote Gourmet Box reviewed;

If you like Fuller pubs then check out my reviews of some amazing Fullers pubs: A night at the 600-year old coaching inn Bel and the Dragon Cookham; The Bull at Sonning: a perfect example of a great British pub; Relaxing in grand style at the Hare and Hounds, Tetbury; Exploring the Cotswolds with a stay at the Bear of Rodborough near Stroud