Japanese food can be some of the most intricate food in the world but can also be some of the most simple. I was lucky enough to go on a food tour of Japan to learn all about Japanese food from top chefs and restaurants, from Tokyo to Osaka and the fishing village of Toba, trying everything from sushi and tempura to tofu and the classic street food of octopus balls. Read on to find out what I learned on my trip around Japan to learn all about Japanese cuisine…

Discovering Japanese food on a food tour of Japan

‘Kanpai!’ The cry echoed around the hotel dining room. It was the fifth ‘Kanpai!’ of the evening in our trip to Japan and it wouldn’t be the last. At this rallying cry, the Japanese equivalent of ‘Cheers!’, we all had to stand up and down a shot of sake – the clear but potent Japanese rice wine. 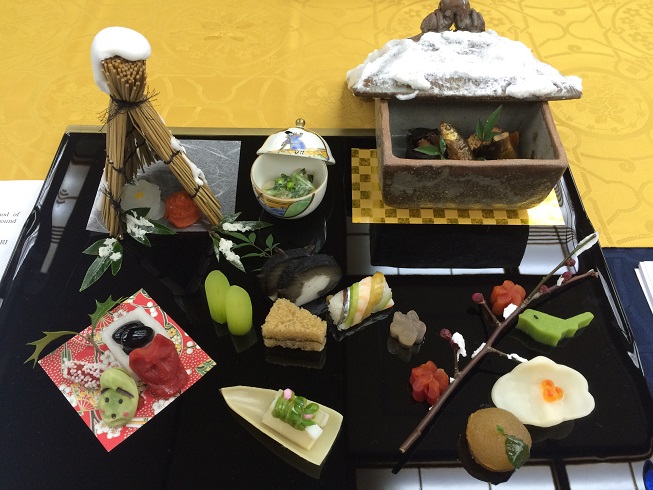 The fish dish was laid out to represent a wintry scene; with a snowy topping to represent a farmer’s house in winter time, a pine-cone shaped sea cucumber, and herring wrapped with kelp

After emptying our glasses (which were quickly refilled) we sat down to enjoy the rest of our 15-course meal, each course a delicately crafted work of art.

Staying in a traditional Japanese ryokan

We were in the fishing village of Toba, around 200 miles west of Toyko, and staying in a traditional Japanese ryokan where the bed was a rolled mat on the floor. 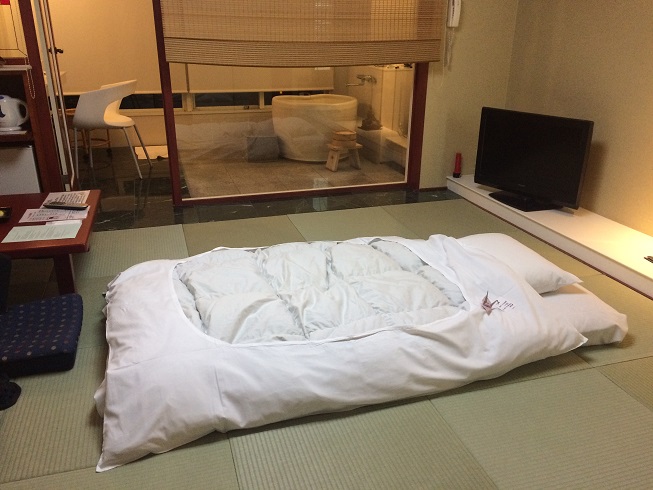 However the food was anything but basic: the first dish alone was the most intricate I’ve ever seen, laid out to represent a wintry scene: there was a snowy topping to represent a peasant’s hut, a ‘devil-faced carrot’ to ward off evil, pearl oyster shellfish, pine-cone shaped sea cucumber, herring wrapped with kelp, peony-shaped salmon – and that was just the first course. 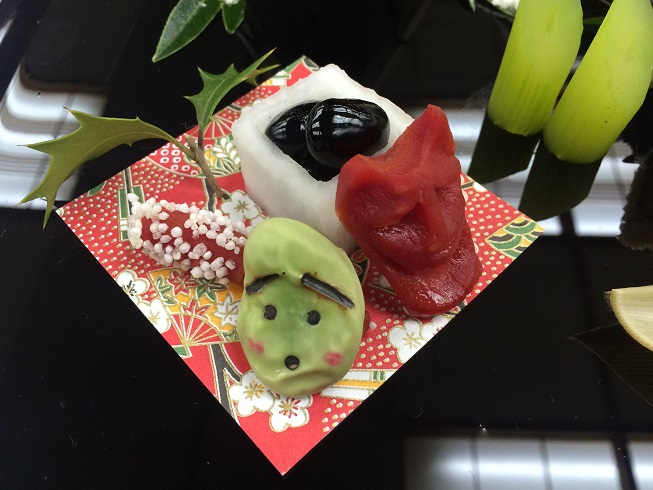 Later we would be served squid, tofu, tuna, trout, lobster, and deep-fried sea-bream: as an introduction to Japanese cuisine goes, it was an impressive start.

An intrepid food tour of Japan

I was spending the week travelling round Japan with seven British chefs, winners of a ‘Seven Samurai’ competition run by the British Hospitality Association (now UKHospitality). Run with Japanese airline ANA, the competition offered the lucky winners – and me – a unique culinary tour of Japan, from the famous Tsukiji Toyko fish market to the lively street food stalls of Osaka, as well as visiting a soy sauce factory, a bonito fish smokehouse, watching women divers hunt for abalone and even making our own dried nori seaweed. Oh yes – and we’d be eating a LOT of food (with chopsticks, of course).

A beautiful dish of sushi, including salmon, tuna and the potentially lethal puffer fish

Thankfully traditional Japanese cuisine, as I was to learn, centres around fresh ingredients with as little processed food as possible, which lets the natural flavours speak for themselves.

just a week in Japan, our schedule was tightly packed. No sooner had we landed at Tokyo’s Haneda airport than we were being whisked off to a masterclass in Tempura cooking by the head chef at the Prince Park Tower hotel: a quick dip in the lightest of batters made from egg, flour and water and 20 seconds deep frying in a mix of sesame and vegetable oil transformed everything from shrimps and asparagus to scallops, abalone, mushroom and leeks into delicious tempura, accompanied with radish rice, three different types of salt, pickles and of course, a lot of sake. 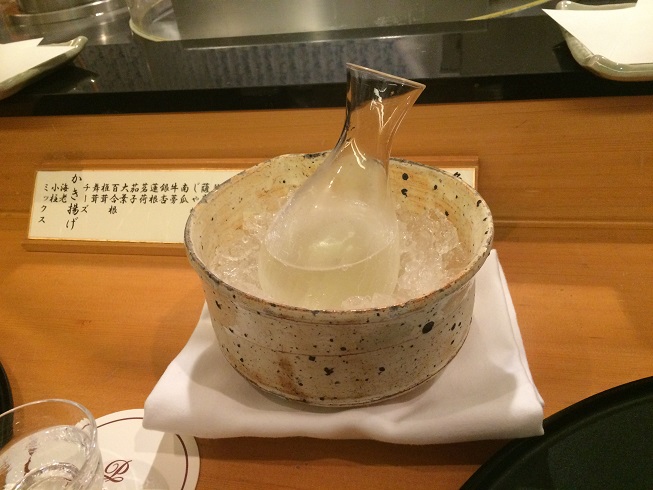 A little carafe of sake

As a large part of Japanese cuisine focuses on fresh fish – which is eaten raw in dishes such as sashimi and sushi – it is small wonder that the Tokyo fish market was the largest and busiest in the world. (It has now been relocated due to the Tokyo Summer Olympics but many restaurants and stalls still remain). Even though we were there at 4.30 in the morning the place was already bustling: wholesalers navigating on speedy little carts between pallets of freshly caught fish of all difference hues and sizes.

Fresh fish on sale at the Toyko fish market

Visitor numbers are strictly limited here so we were lucky to get up close to the tuna auction, where massive fresh and frozen tuna are laid out on the floor for inspection by potential buyers – restaurant owners and traders who wear numbers on their hats which will be written down and attached to the fish they successfully bid for. The loud clanging of a handbell signals the start of an auction, and with several auctions taking place in the one room at the same time, the action is loud and hectic, but very serious – we watched as a single tuna fish sold to a restaurant owner for a tasty £20,000. 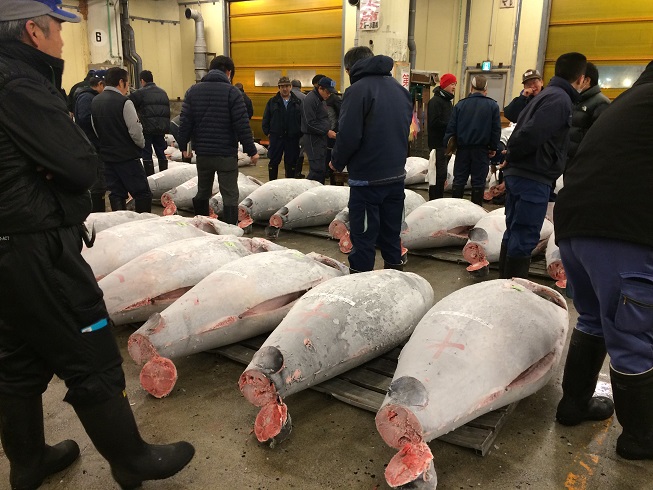 A single tuna fish at the Tokyo fish market sold to a restaurant owner for a tasty £20,000

After breakfast we visited the famous Kaminarimon (Thunder Gate), the symbol of Tokyo, which leads to the Senso-Ji temple along a bustling pedestrianized street called Nakamise. Here more than 200 tiny shops sold everything from samurai swords to kimonos, traditional Japanese sweets, clothes and folding fans. However the real treat for the travelling chefs was the nearby Koppabashi district which houses hundreds of shops purely for the restaurant industry, selling everything from pots, pans, sake carafes and specialist Japanese cooking knives which had price tags to match their worldwide reputation. 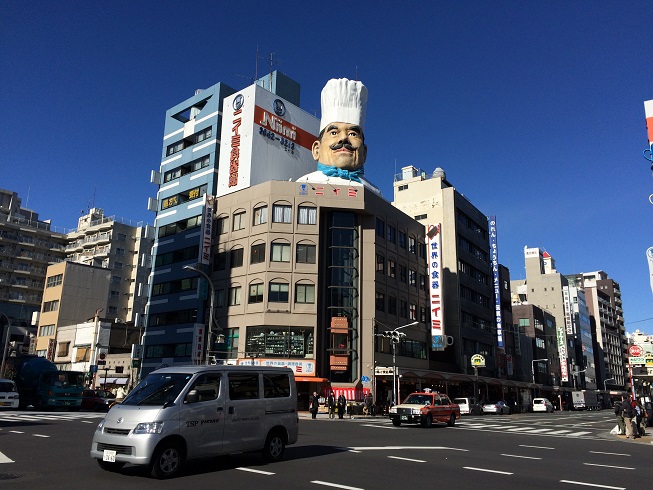 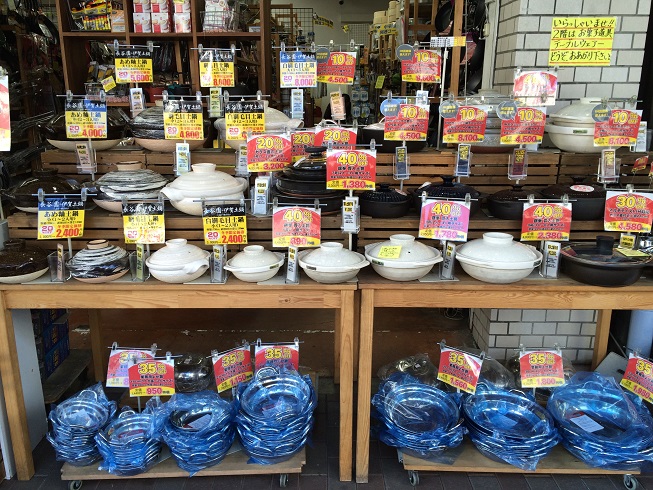 After a glimpse (all the public can see) of Toyko’s Imperial Palace, home to Emperor Akihito, I headed off to the Toyko subway to the shopping district of Ginza and its vast department stores. The ‘culture shock’ I was expecting failed to arrive: Tokyo seemed less busy and crowded than I had expected and as a foreigner I felt comfortable navigating my way around even on the subway. 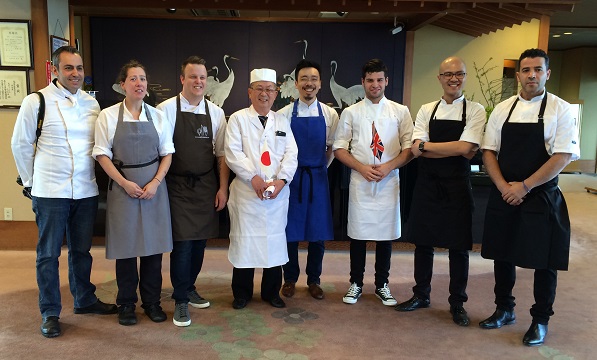 Eating out in Tokyo

Having eaten lunch at a restaurant for the diet-conscious – there were scales on every table to weigh your food and timers to make sure you chewed every mouthless – dinner was more indulgent. The Tokyo Shiba Tofuya Ukai is a traditional Japanese Kaiseki formal dining restaurant, with beautiful gardens just underneath the Tokyo Tower, Japan’s second-largest structure (and a dead ringer for Blackpool Tower). 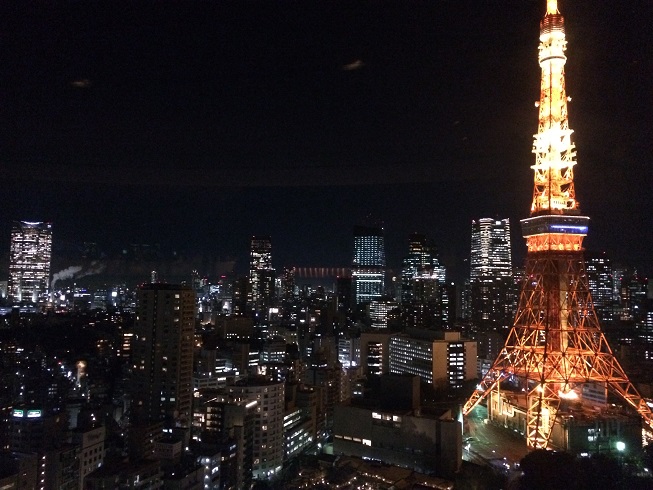 Shoes were left outside our dining room and we were served an array of food including fried and baked tofu, clams with miso, kelp soup, seabream and the tiniest whitebait I’d even seen, while sitting on the floor by served by waitresses dressed in elaborate kimonos. 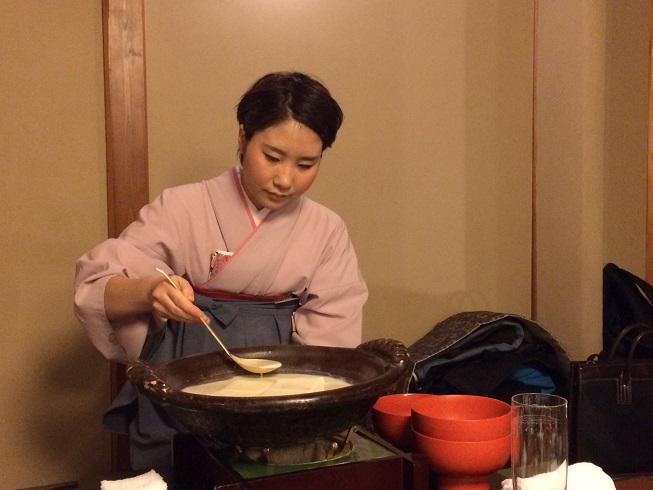 A journey on the Japanese bullet train

The famous high-speed Shinkansen bullet train whisked us at a smooth 200mph the next morning past a snow-topped Mount Fuji westwards to Nagoya where we caught a local train to Toba, a fishing community in the Mie Prefecture on the south coast. 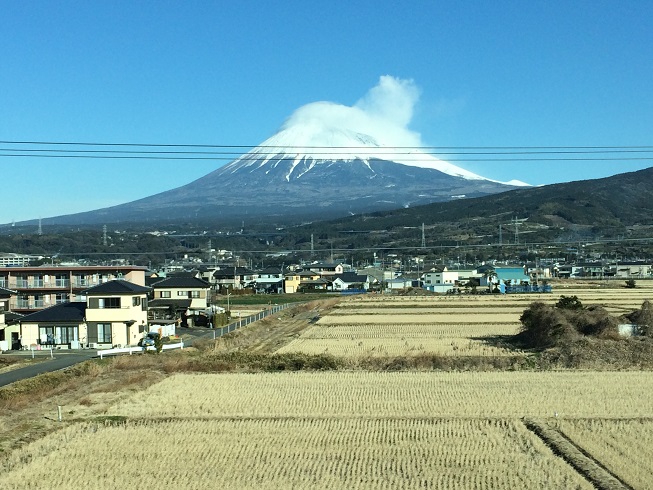 Mount Fuji from the bullet train

There we lunched on conger eel and tofu before visiting the 2000-year old Ise Grand Shrine, one of the most important sites in the Shinto religion, ending up in a tiny remote smokehouse on the coast where tuna is dried and smoked to make the rock-hard bonito. This is then shaved to produce flakes which have a distinct flavour and which is one of the main ingredients of dashi, a broth which forms the basis of many sauces and soups in Japanese cuisine such as miso. 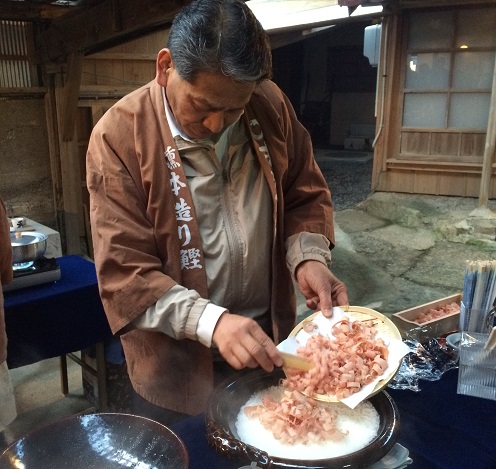 After our epic evening of seafood and sake (and the obligatory karaoke session, where I massacred ‘Let it Go’ from the film Frozen), a boat trip was just the thing to clear our heads the next morning. 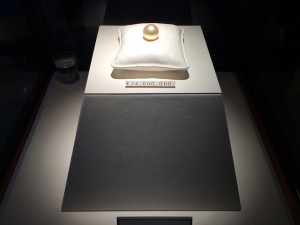 After visiting Mikimoto Pearl museum and pearl producer, where cultivated pearls were made (one was for sale for a cool £120,000) and watching the women divers known as Ama plunge into the sea, we hopped on a boat and sailed to Toshijima island where we chopped and pressed the dark nori seaweed which is then dried flat and used in sushi. 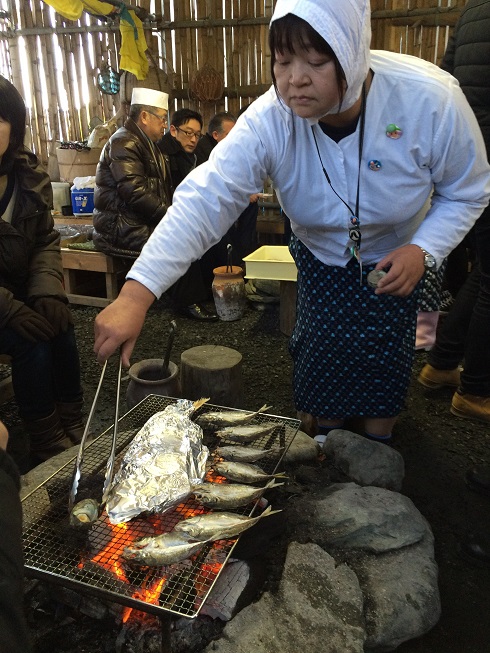 Fresh fish for lunch on the island of Toshijima

Lunch was fresh swordfish, seabream and whole whelks cooked on an open fire in the divers’ hut, and then it was back to the hotel for the chefs to make sashimi. The fish were still so fresh they were still alive and flapping around on the work surface, but each chef gamely took on the challenge, instructed on where to plunge the knife by the head chef Matsuura. 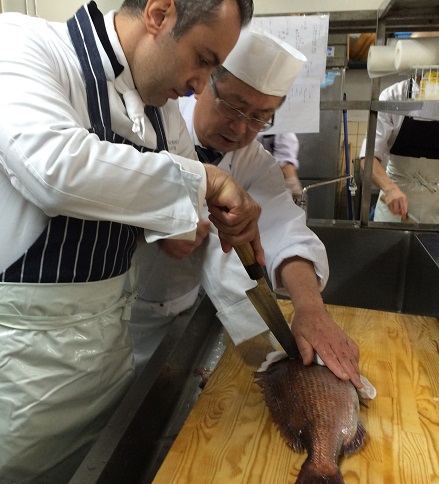 At this point I decided to visit the traditional hot baths often found in ryokan hotels. You plunged in naked and wow, was it hot. 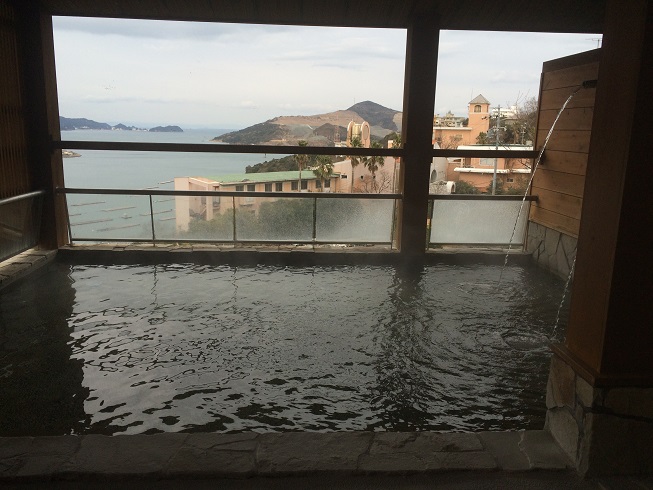 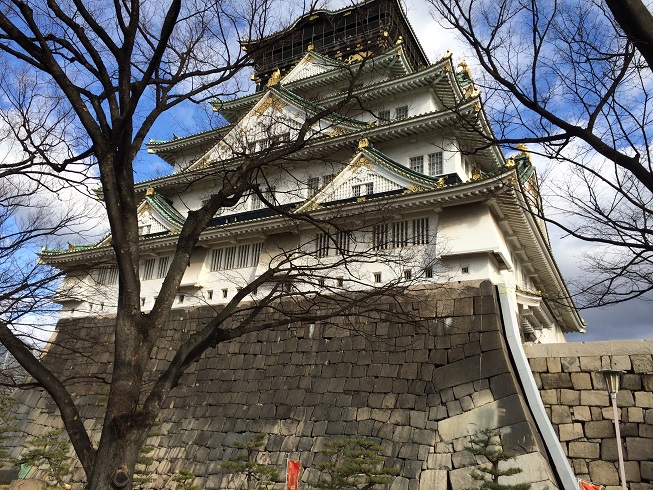 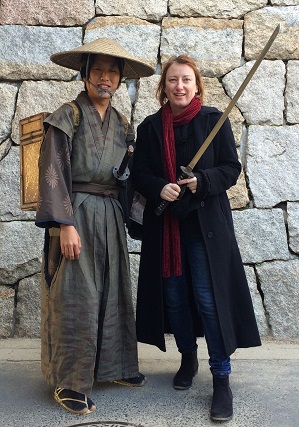 Sarah with a samurai in Osaka

We fitted some more sight-seeing in our rare afternoon off in Osaka including a trip to the impressive Osaka castle, one of Japan’s most famous landmarks which has been destroyed and restored many times. A production crew were filming a historical drama in its grounds which certainly added to the sense of history (and made for a great photo opportunity with a samurai warrior).

The Dotonbori district where we spent the evening was more how I’d expected Japan to be – very loud, bright and bustling, with hot street food stalls everywhere you looked. We joined the locals in eating some piping hot octopus balls (octopus fried in batter) and then worked our way through the entire menu of a tiny restaurant overlooking the river – with beer and wine it came to just £15 a head. 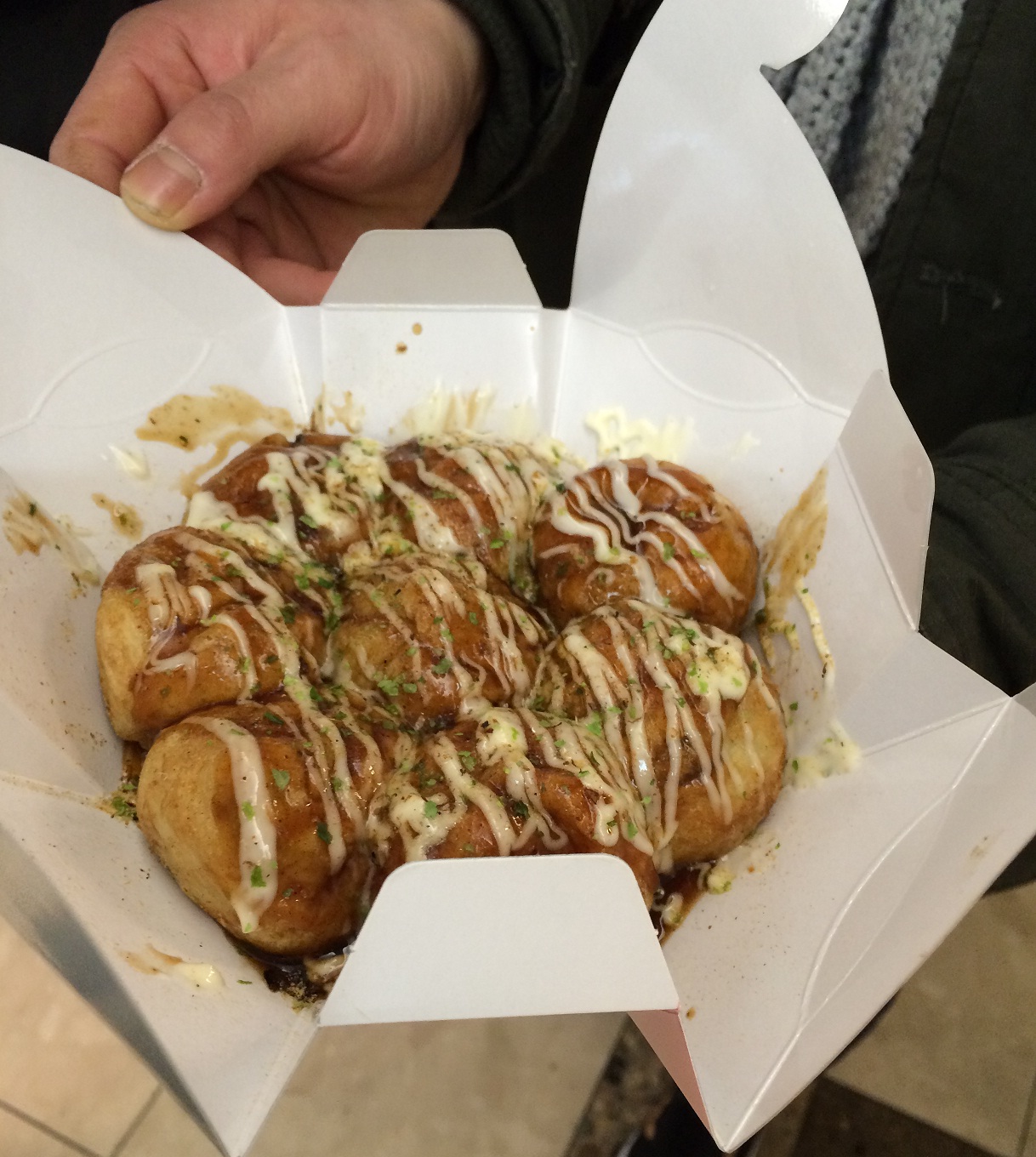 The final day saw our group head by train to Kyoto to see soy sauce being made the traditional way – which turned out to be with the help of Mozart. The owner of the factory, which was deep in the countryside, explained that the roast soy beans used in the production of soy sauce ferment the best when played the classical composer (others were tried but Mozart works the best) which is why the shed was echoing to the sounds of Mozart’s Requiem when we visited. Once fermented, the mixture is then sieved and pressed to make the rich, dark sauce – we even made some ourselves to take home with us. 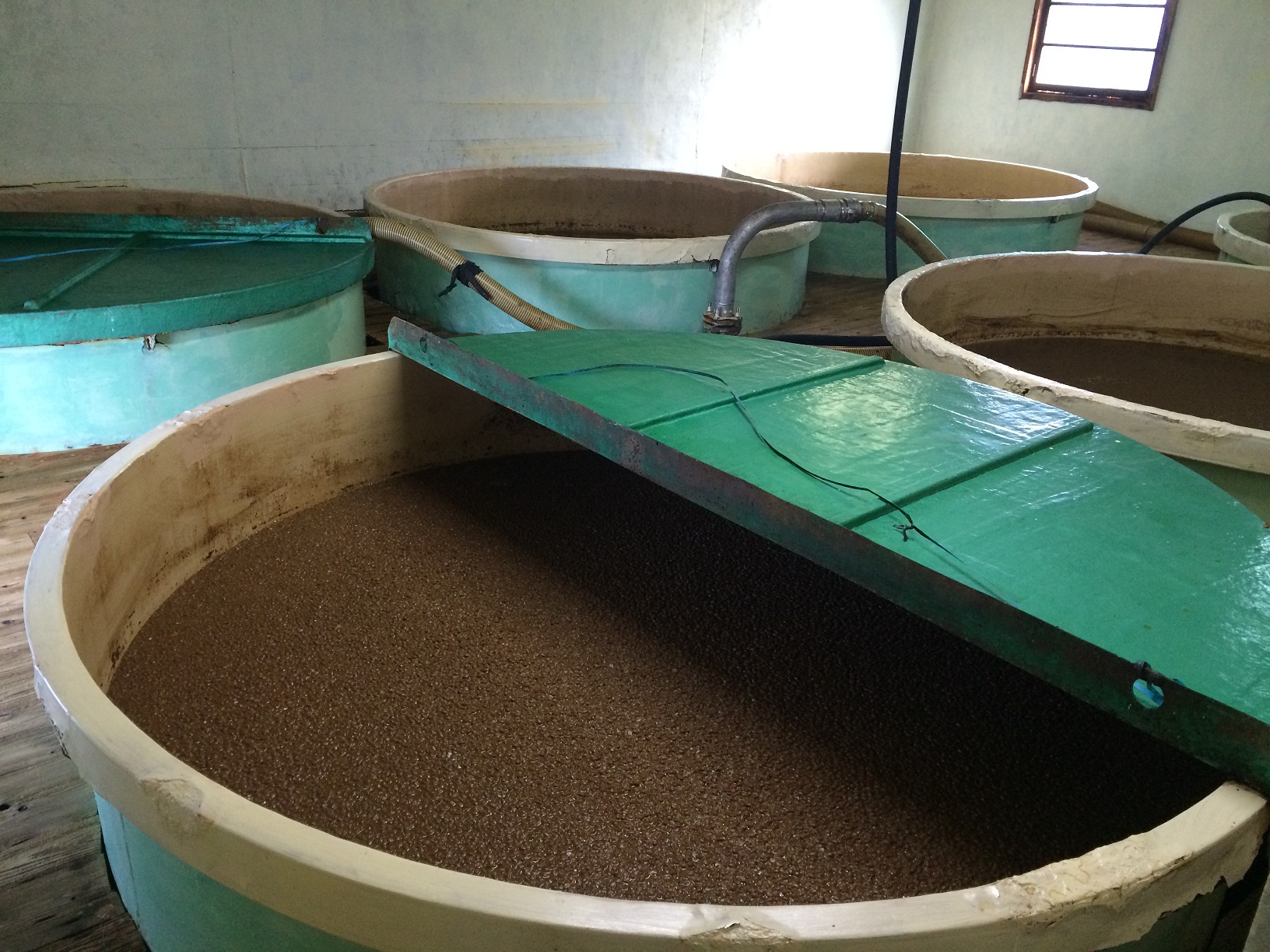 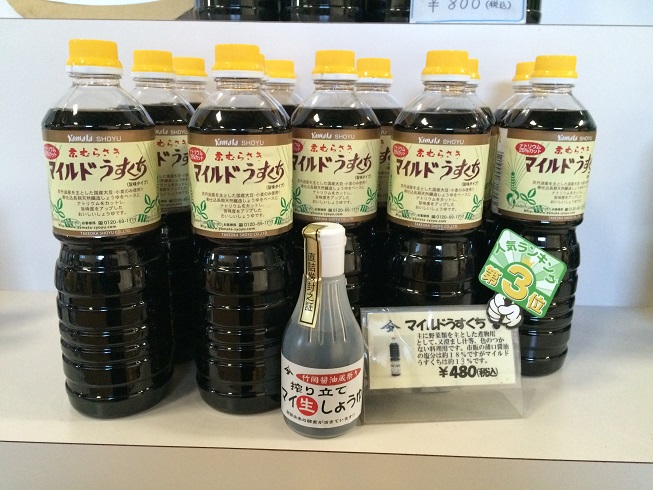 My very own jar of soy sauce

On the way home we stopped by the Inari shrine, one of the biggest in Japan, which is dedicated to the gods of rice and business prosperity, and has an astonishing 5,000 red gates throughout its grounds of differing sizes. I bought a fortune for 200 yen (just over a pound) and was delighted to receive the best possible one – 2016 should be a good year! – but those with a poor fortune were encourage to leave it tied up to fences in the shrine itself. 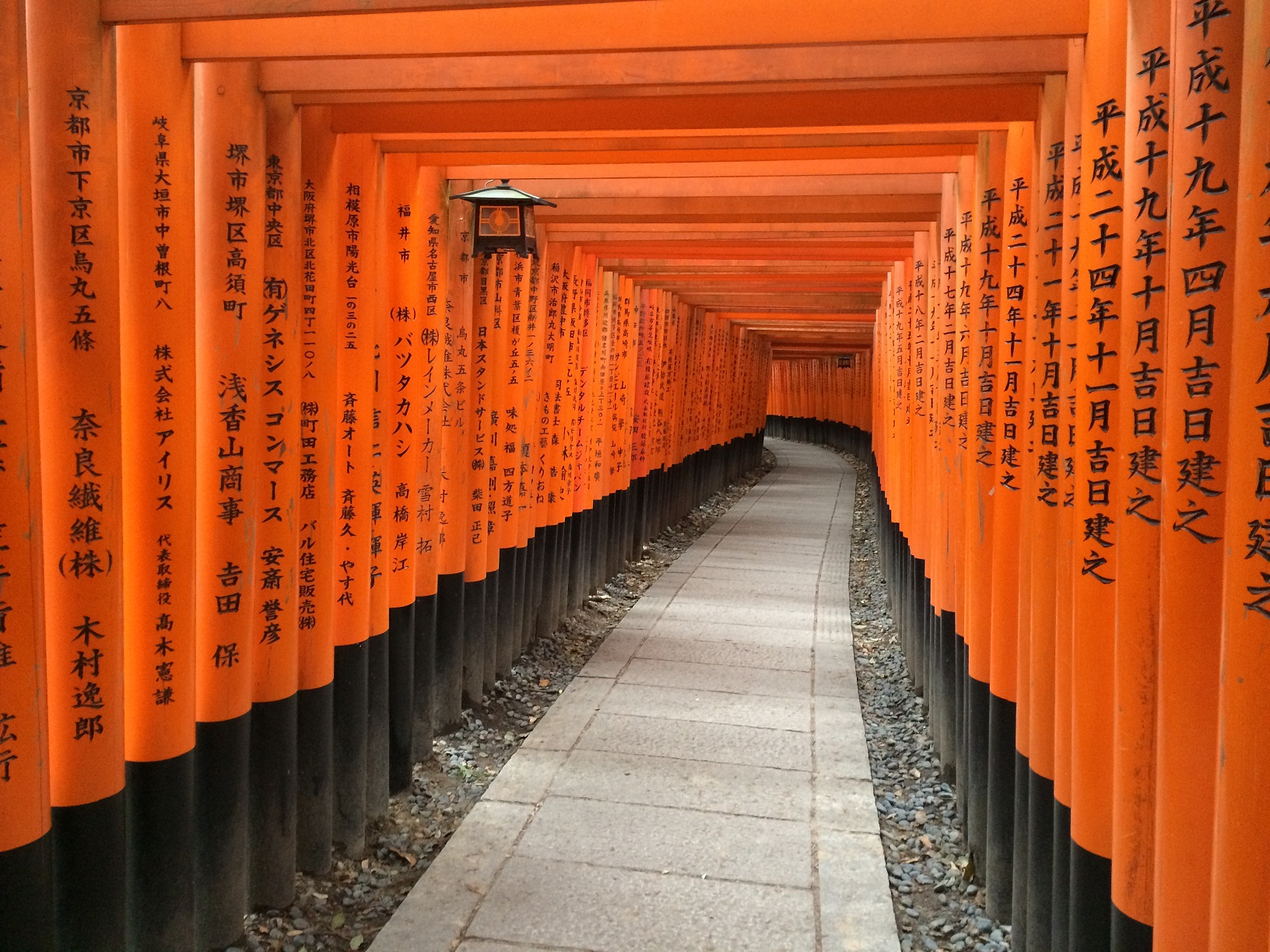 Gates at the Inari shrine Kyoto

It was our last night and time for one final blow out, to a traditional Robata barbeque (which literally means ‘fire-side cooking’) in Shinsaibashi. We sat on the floor around a huge open grill and watched our chef for the night cook a huge amount of food from fresh mackerel, squid, scallops and pork belly, lobster, chicken thighs and steak. All with unlimited beer and sake. Kanpai! 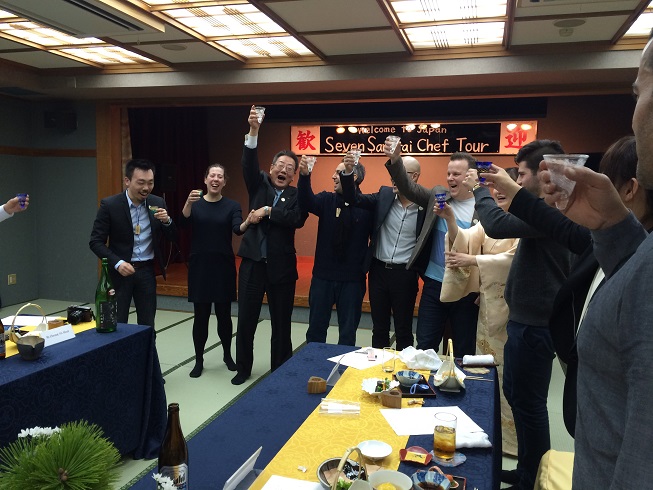 Information and how to get to Japan

ANA flies daily from London Heathrow to Tokyo Haneda, via Europe or direct.

Editor’s note: This travel piece was originally published in January 2016

Love discovering some epic holiday ideas? Then check these out: How to hike the Inca trail to Macchu Picchu, and enjoy it!; My perfect Jamaica holiday: beaches, boats and beauty; Setting sail in the Arctic, on the ‘World’s most beautiful sea voyage’; Island-hopping in the Aegean with SCIC Sailing; A week cruising around Spain and France with P&O Cruises Britannia; Dolphins, rum and luxury hotels in Mauritius;