Being in the Land of the Midnight Sun can do strange things to you. A few days into my cruise along the Norwegian coast, I’d been chatting on deck after dinner with my fellow passengers. I went to bed thinking that it wasn’t a particularly late night – and was shocked to find that it was quarter to five in the morning! 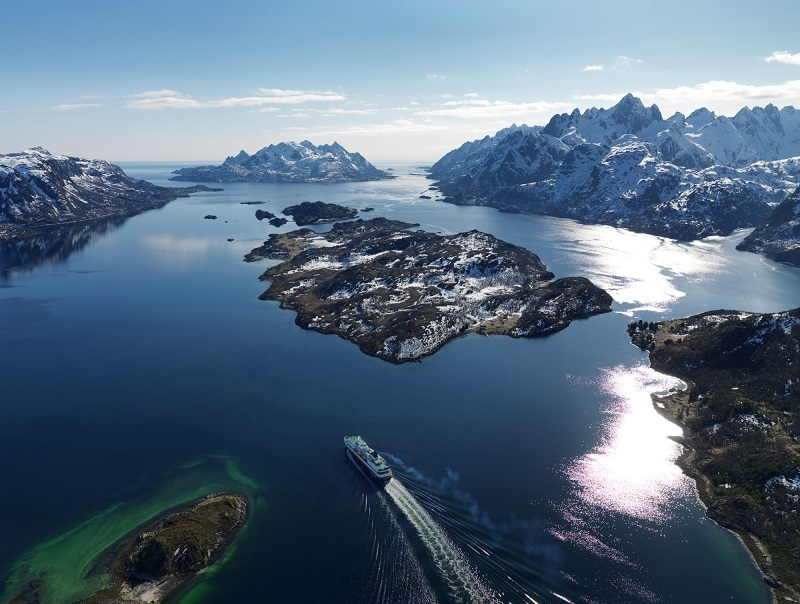 Sailing along a coastline which was as brightly lit up at night-time as if it were day had completely knocked my body clock out of whack.

But when you’re in the Arctic Circle you have to expect the unexpected – from eating king crabs the size of dinner gongs, accepting a cod liver oil shot from a man dressed as a Viking, or travelling at speed on rubber dinghies through glacier-carved fjords in search of sea eagles (and Hollywood stars).

I was spending five days onboard the Richard With, one of Norwegian shipping line Hurtigruten’s 13 ships and named after the founder of the company. 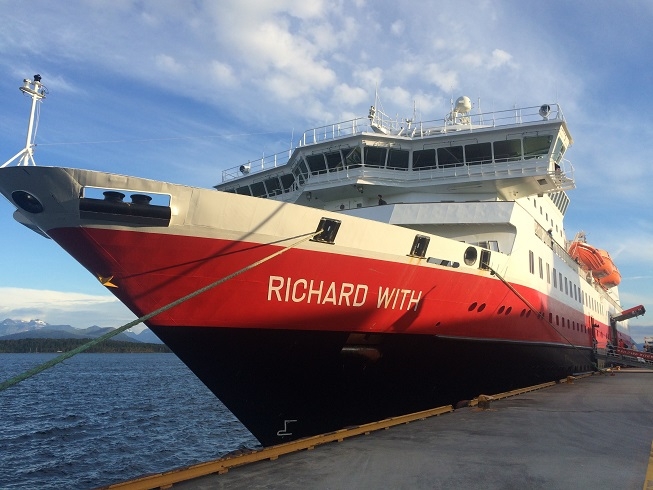 The Richard With, named after Hurtigruten’s founder and my home for the week

Hurtigruten’s fleet of ships have travelled up and down the thousands of miles of Norway’s crinkled coastline since 1893 and now venture much further afield, including to Greenland, the Faroe Islands, South America, Antarctica and across the Atlantic via Africa.

For a different kind of cruise, check out my review of a week on holiday on P&O Cruises new ship Britannia

The coastal route initially began as a vital transport line of goods and local people, a service it still provides 365 days a year, but the soaring popularity of adventure tourism as well as the spectacular scenery (the Norwegian coastal route has been described as ‘the world’s most beautiful sea voyage’) means that travellers can now take part in more than 75 different excursions during their voyage, from kayaking to dog-sledding, horse-riding, tobogganing and whale-watching. 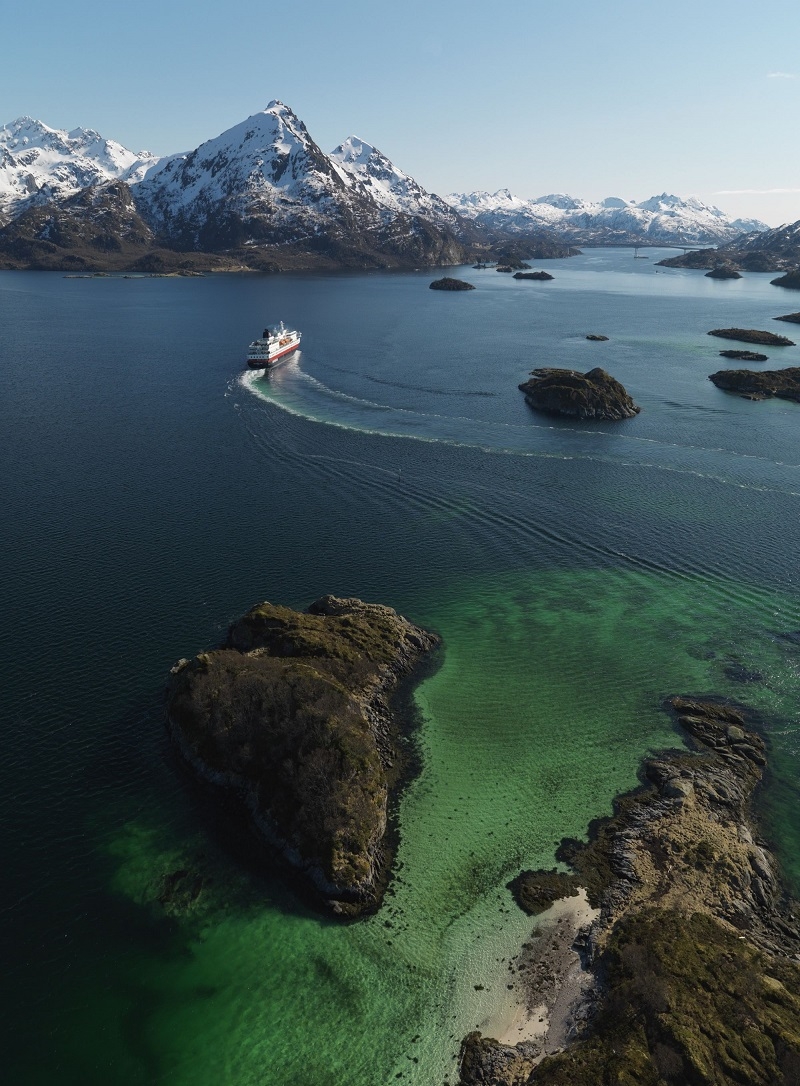 ‘We aren’t a cruise ship, we are a base camp from which to explore the region,’ said Hurtigruten chief executive Daniel Skjeldam. ‘People no longer want to spend their holiday time being passive spectators.’

The midnight sun had been one of the main reasons for my trip, but when I landed in the coastal town of Tromso, high above the Arctic Circle, to board the ship which was to be my home for the next five nights, thick grey cloud meant there was no chance of seeing it on my first night. 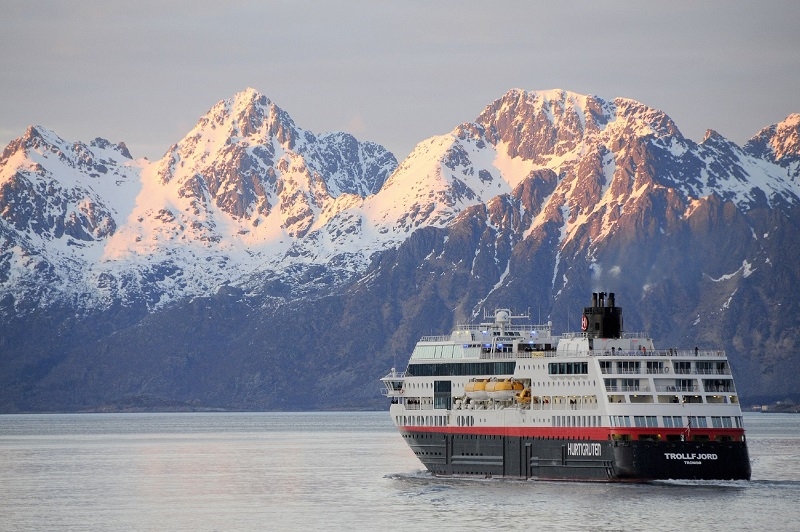 Hurtigruten’s ships travel as far afield as Greenland, the Faroe Islands, South America and even Antarctica

However all was not lost: after an eye-wateringly expensive drink in a pleasant local bar – £9.60 for a bottle of locally-brewed beer – and some picture-perfect seafood at a restaurant in the marina, some of my fellow travellers and I hiked across the impressively-high mile-long Tromso bridge to the beautiful Arctic Cathedral on the opposite shore.

During the summer season there are concerts every midnight for Hurtigruten guests where a trio sing and play a mix of classic music and Norwegian folk songs in the candle-lit church with amazing acoustics, a memorable night-time experience.

After the concert we boarded the ship in the grey half-light and soon set sail south. Hurtigruten describes itself as a voyage rather than a cruise, so people used to luxury liners might be in for a shock. There are no cabaret nights, West End shows, swimming pools or quiz nights and the cabins are smart but functional. 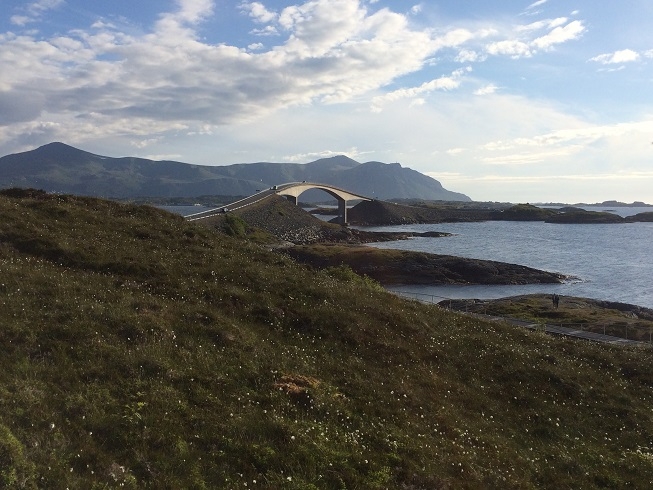 As well as seeing Norway from the sea, cruise passengers can take tours on the mainland such as to the Atlantic Road (pictured)

However the company does pride itself on its fresh, locally-sourced food including Arctic char and reindeer – mainly served buffet-style, although there is a private dining room for hire on board too – and there are plenty of places indoors and out to sit and admire the view.

This was hard in the first few days when the weather was so grim – looking at the sky I asked a fellow passenger in disbelief: ‘How many shades of grey are there?’

‘Fifty,’ came the droll reply – but the scenery was transformed on the third day when the clouds blew away and it was blue skies all round. Then the stunning scenery – majestic cliffs, little islands, remote cottages hugging the shoreline – could really be appreciated. 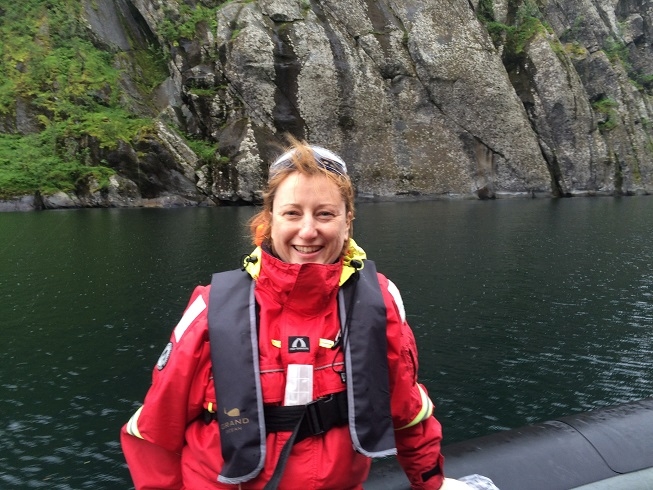 Some excursions are more adventurous than others, such as the breath-taking RIB boat trip deep into the fjords

One afternoon we donned massive waterproof onesies to race around on RIB boats, skidding over the water up through the strait of Øyhellsundet and to the spectacular Trollfjord, two kilometres long and surrounded by steep granite walls on all sides.

With great pride our pilots told us that this was recently home to Matt Damon when he was filming his movie, Downsizing.

After spotting a sea eagle and even a dolphin we raced along the coastline to meet up with our ship at Solvaer, a charming fishing village overlooked by the spectacular ‘goat mountain’, which has two rocky horns that climbers have been known to jump between. 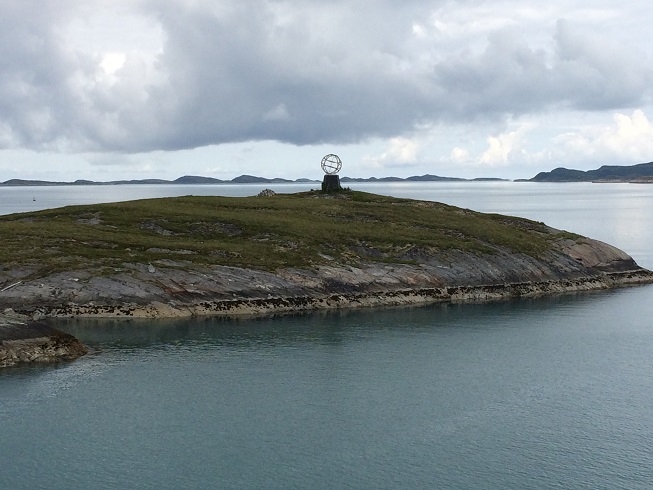 Crossing the Arctic Circle was truly memorable: here’s the moment we passed the Arctic circle marker on the remote Vikingen Island

Crossing the Arctic Circle is not something the ship would let go unnoticed, so as the Richard With sailed past the little globe on the island of Vikingen the next morning, the ship’s manager Harald Weinreich dressed up as a Viking (or was he supposed to be Neptune?), wielded a rubber cod and offered shots of cod liver oil to mark the occasion (be warned – the fishy taste is hard to get rid of).

As we were now officially outside the Arctic Circle we had left the land of the Midnight Sun, but even so the sun only dipped below the horizon for an hour or so at midnight.

Our next stop was the picturesque Unesco-listed Vega archipelago, a cluster of dozens of little islands where for the past 1,500 years, life here has been based on fishing and looking after eider ducks. The brightly-painted buildings looked beautiful in the sun and inside we were treated to a fascinating tour of the eider museum and shown how the villages still collect the soft down to make into shawls and quilts. 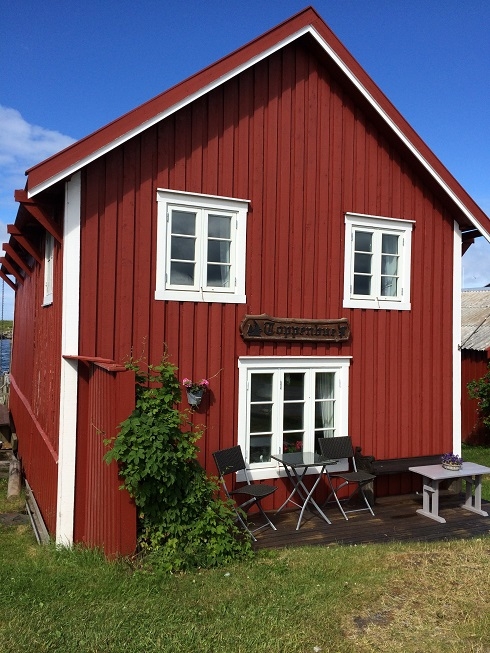 One of the pretty red houses in the Vega islands

We explored Trondheim, the former capital of Norway, by early morning coach tour, driving along its wide streets (so as to protect its wooden buildings from fire) to its huge Nidaros cathedral, site of the burial place of its national saint St Olav. That evening we took another bus ride, this time along the beautiful 8km Atlantic Road, visiting the 13th century Kvernes Stave church before dining on local speciality clippfish, known as bacalao, at a local tavern with great views of the sea. 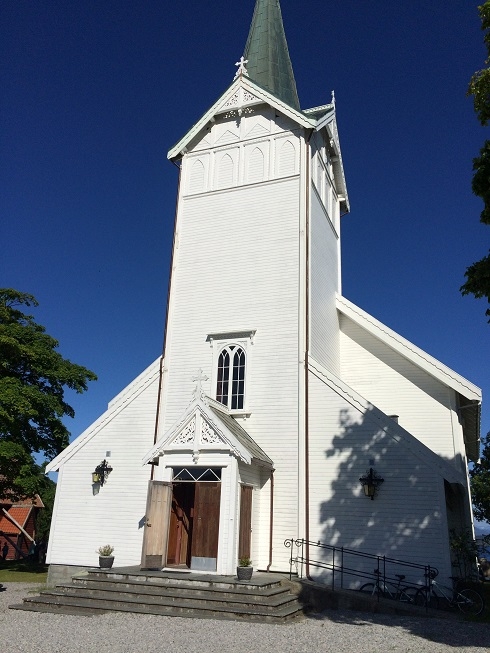 One of Norway’s oldest churches at Kvernes 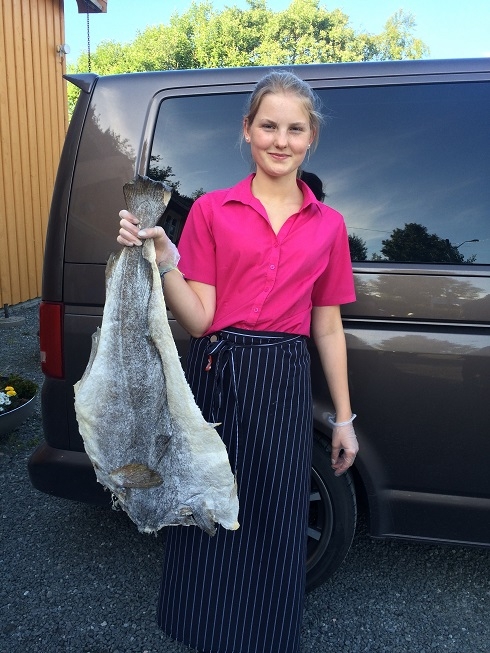 A waitress holds a clippfish, also known as bacalao, one of Norway’s national dishes

Our trip ended in Bergen, the final call on our coastal voyage. With around 260,000 inhabitants, Bergen is a lively town, surrounded by mountains on one side and the coast on the other, with a marina and an open-air food market where free samples of seafood, reindeer and whale salami awaited the braver ones in our group. However the best way to see the whole city is from the top of the funicular railway which shoots you straight up the cliffs in just a few minutes. 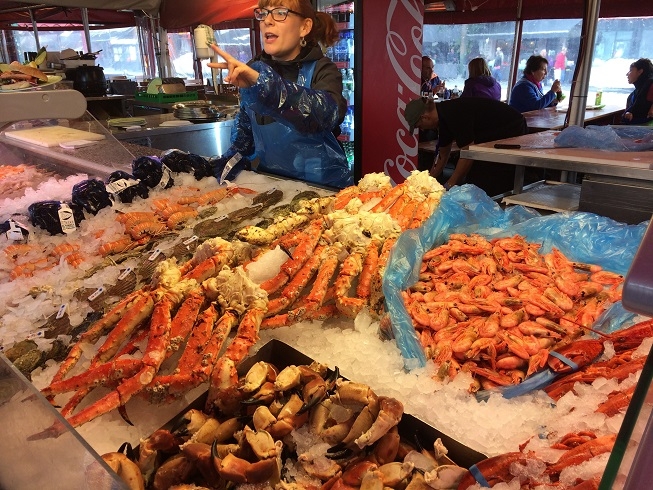 From there we not only met a troll but could see the whole of Bergen laid out before us, including our floating home for the past five days. After few hours in port, it would begin its journey northwards again, carrying a new set of passengers eager to explore the Arctic. 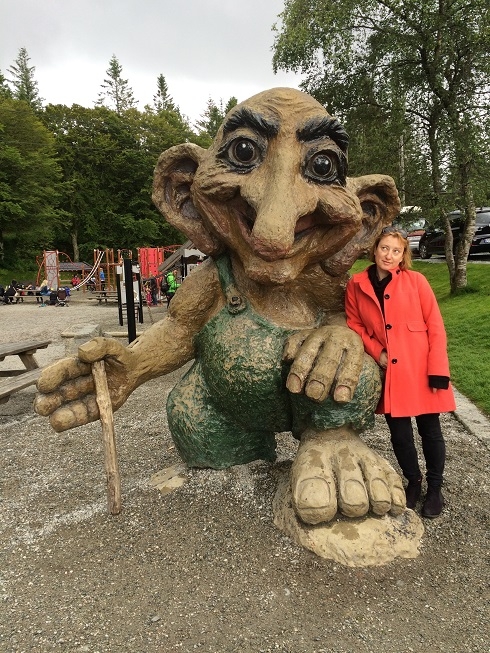 My new best friend: the friendly troll at the top of Bergen’s cable car

Travel notes: I travelled on Hurtigruten’s five-day Flavour of Norway trip between Tromso to Bergen, currently available from £745 per person based on two sharing including full board and flights, excursions extra. The full 12-day round trip costs from £999 for a winter departure.

As well as the coastal route, Hurtigruten offers voyages to Greenland; to Iceland; around Spitsbergen; and to Arctic Canada. In the southern hemisphere, Hurtigruten takes guests to the waters around Antarctica; along both coasts of South America; and to the Amazon rainforest.

How to hike the Inca trail to Machu Picchu – and enjoy the journey!