Swimming near a school of dolphins, walking on a recently-erupted volcano and diving to a wreck of a World War 2 Japanese fighter plane might seem like once-in-a-lifetime holiday but if you are exploring Papua New Guinea, it is just an average morning.

Where is Papua New Guinea?

I was spending 10 days travelling around Papua New Guinea, which is just 100 miles north of Queensland, Australia but 8,600 miles and halfway across the globe from the UK. 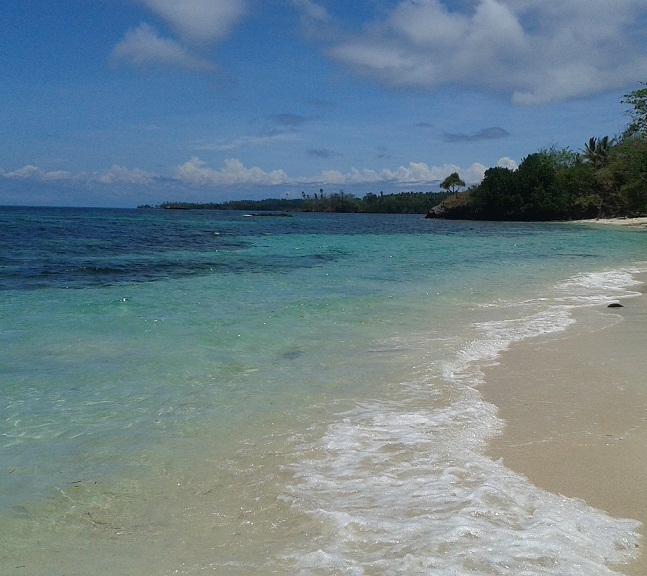 Having been previously colonised by Germany and Britain, and governed by Australia, Papua New Guinea became independent in 1975 and is now part of the Commonwealth – (driving is on the left, as in the UK and Australia) but it is also one of the most diverse and undiscovered places on the planet. People are fascinated by Papua New Guinea culture, how to travel around Papua New Guinea, what type of holiday to expect in Papua Guinea and having spent a week there, I can truly say it’s one of the most memorable place to visit – a real bucket-list destination.

The languages of Papau New Guinea

There are thought to be more than 800 different languages spoken among Papua New Guinea’s seven million inhabitants and four-fifths of the population live in remote rural areas. There are few roads, so travel is done by boat and plane, and the country is one of the least charted in the world. 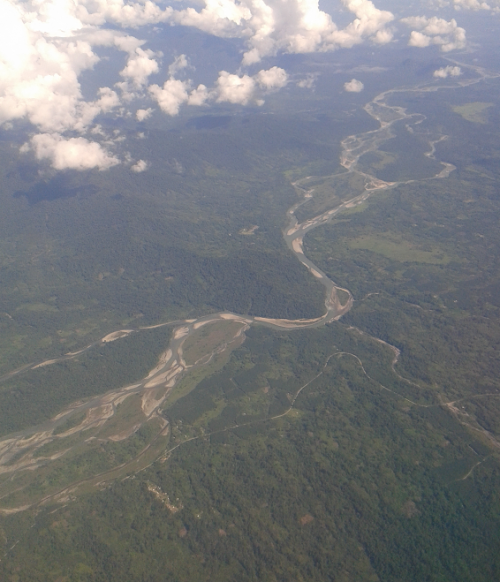 Travelling across PNG is easiest by plane as roads are scarce

After a 12 hour flight to Singapore and then a further six hours, our group landed in the capital of PNG, Port Moresby, and while it was early morning, the heat was already noticeable.

Rather than staying in the city though, our reason for being in Port Moresby was just to catch our onward connection – the capital has a reputation for being a violent and unpredictable, a reputation borne out by the local press which chronicles problems of tribal clashes, alcohol and drug abuse and and domestic violence on a daily basis. 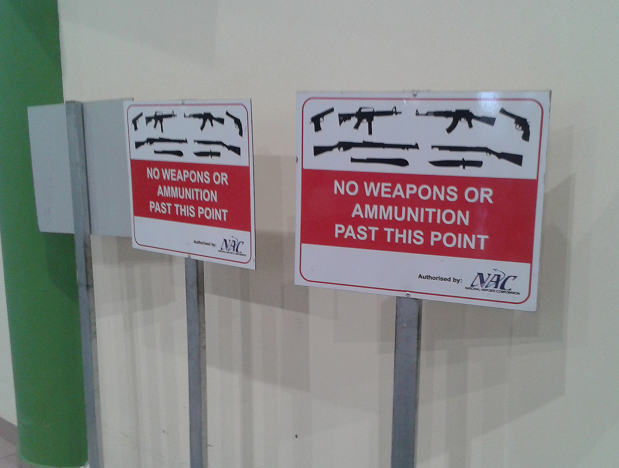 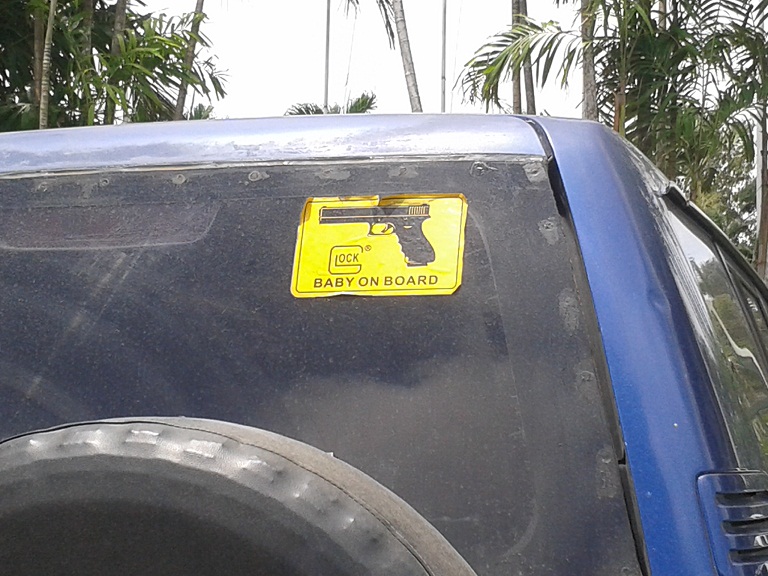 …and on a local car

The British Foreign Office says that there is a ‘high level of serious crime’ in the country, with ‘law and order poor or very poor’ and tribal fighting which can escalate quickly. While expats I met during my travels around PNG told me that they have lived there for years without any trouble, they also admitted to never taking public transport, only travelling in convoy of cars at night, employing security guards and avoiding a whole host of no-go areas in the city.

Attacks on tourists are rare, but even the expats asserting how safe the country is say that you should only travel to Papua New Guinea as part of a guided tour. So we left Port Moresby and instead flew inland to the Highlands and Rondon Ridge resort, 7,100 feet above sea level with spectacular views of 80 miles across the Waghi Valley spread out below us. My room was smart and spacious if basic, and had been built on the side of the hill below the main building where we ate every night, at 7pm sharp. 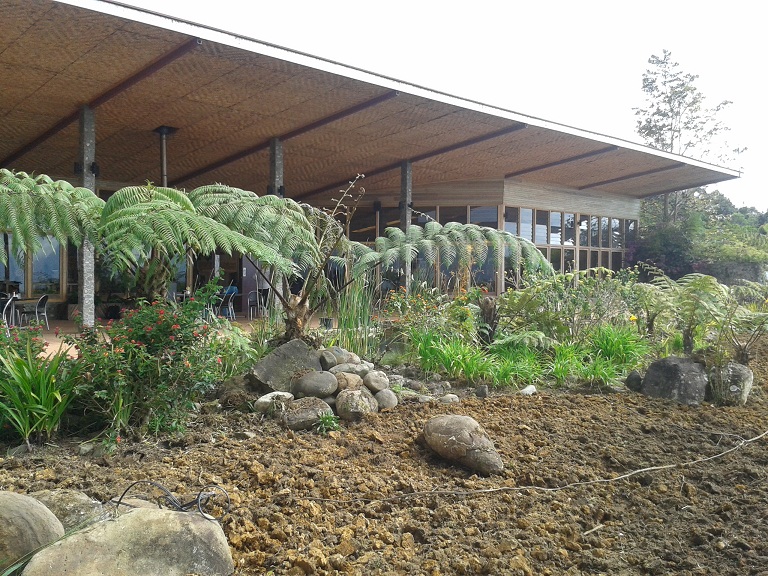 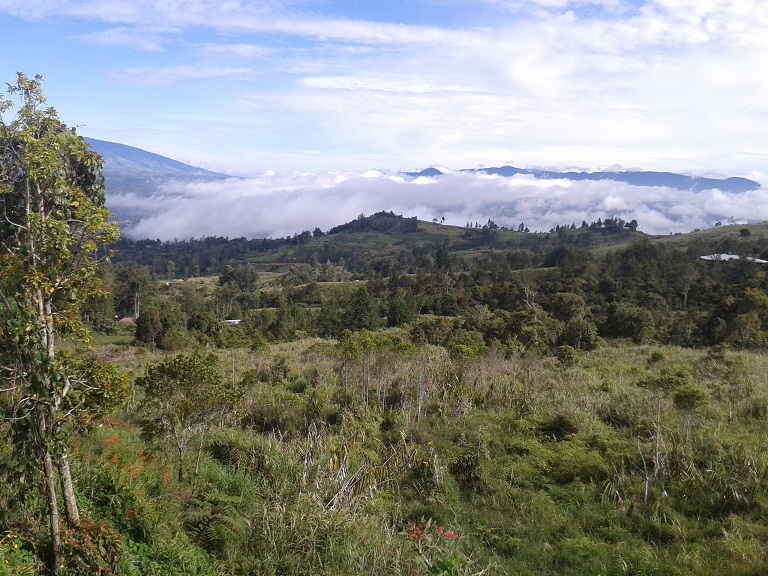 High up in the clouds: the view across the Waghi valley from Rondon Ridge

The hotel, built in 2006 and just 40 minutes away from the bustling town of Mount Hagen, has links with the local Melpa tribe from where Michael, my guide for two days, came. The Waghi Valley and the Melpa people were unknown to outside world until relatively recently and so many traditions continue today, in particular being based around rural communities, with many living in wooden huts in smart villages surrounded by beautifully-kept allotments.

The countryside round Mount Hagen is lush and green, dotted with villages and little wooden huts

Many of the roads in Papua Guinea – this part, at least – were dusty and unpaved, and along them could be seen groups of smartly-dressed children walking barefoot to school, or groups of men playing darts for money on boards set up alongside the road. 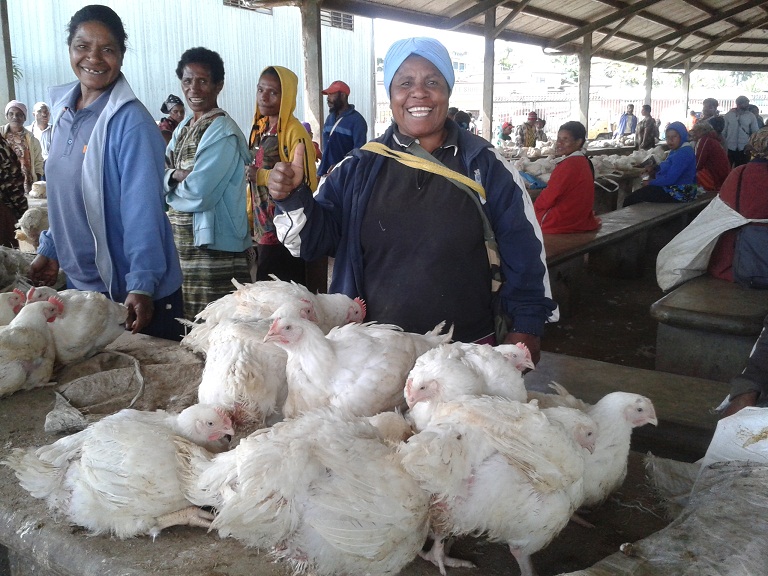 Chickens for sale at the local market

Tourist revenue is a source of income for many of the clans, and so we were greeted at several village by people in traditional costume, some brandishing spears and re-enacting tribal rituals and dances, and showing us historical cooking sites and shrines to honour the dead. 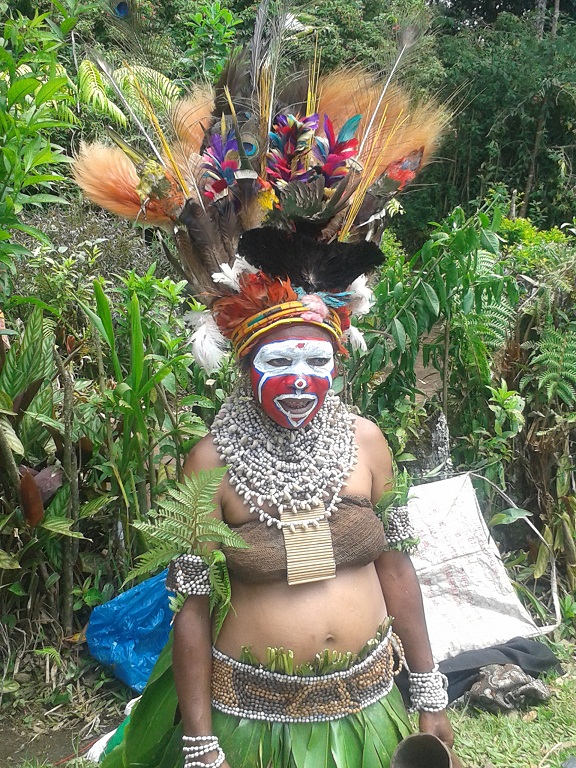 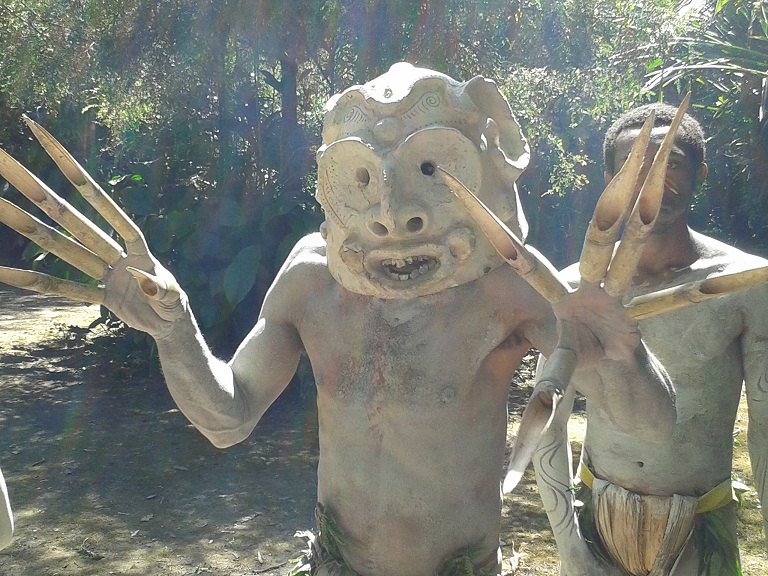 With the singing displays and the habit of everyone we passed on the road to smile and wave at our bus, it started to feel like a royal tour: much more authentic was our visit made to the local market to mingle with everyday shoppers, or visiting Michael’s own village, including his wooden house it had taken him several months to build. Just outside his house he had constructed a sty for his three pigs which were for payment for his future bride: the ‘bride price’ paid to the bride’s family. 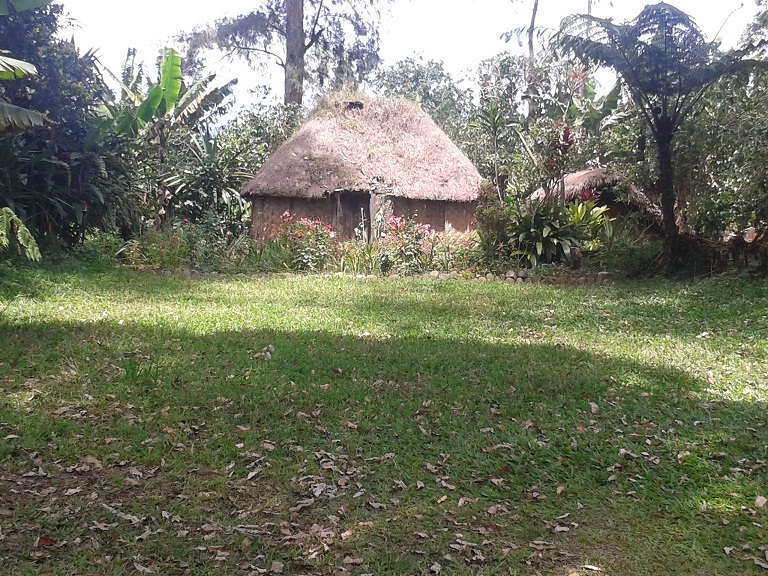 Most people live in villages in wooden huts

The island of New Britain in Papua New Guinea

After three nights in Rondon Ridge we flew, via Port Moresby and lunch at the smart Airways Hotel,  – where we just missed the visiting Australian Prime Minister – across to the island of New Britain. 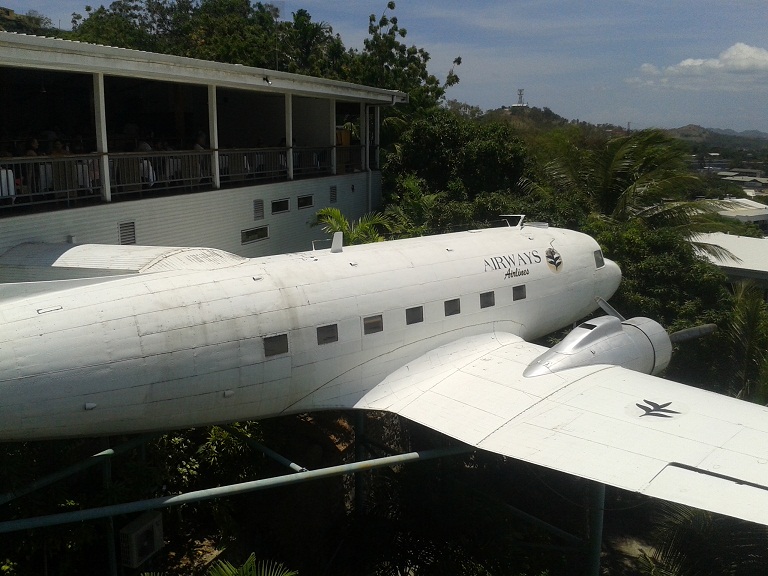 The Airways Hotel at Port Moresby, a good place for stopovers. As well as being right next to the airport, it also has a plane built into it…

The following morning after breakfast on the open air dining room at the Kokopo Beach resort, we were picked up by a tiny boat and after less than half an hour of bouncing along the waves, the crew had spotted the dancing mass of dolphins, jumping into the air and swimming alongside us almost close enough to touch as we sped along.

After an exhilarating game of ‘chase’ across the ocean – the dolphins swimming back to us, then away, then back again, all the while doing somersaults in the air – it was time for some snorkelling in Papua New Guinea; and there we discovered the Japanese plane, lying on the seabed untouched and almost intact after 70 years. 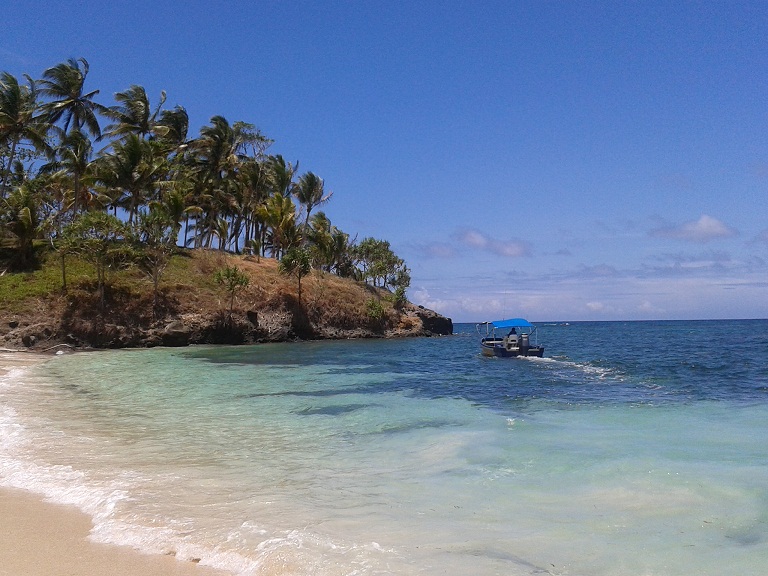 The town of Rabaul, which was just across the bay, had been the main base in the South Pacific for the Japanese forces during the Second World War, and the entire country saw fierce fighting by the Allies, especially Australia and America, who were battling to reclaim the territory. Hence the Japanese plane submerged beneath the waves, having been shot down while returning to base. 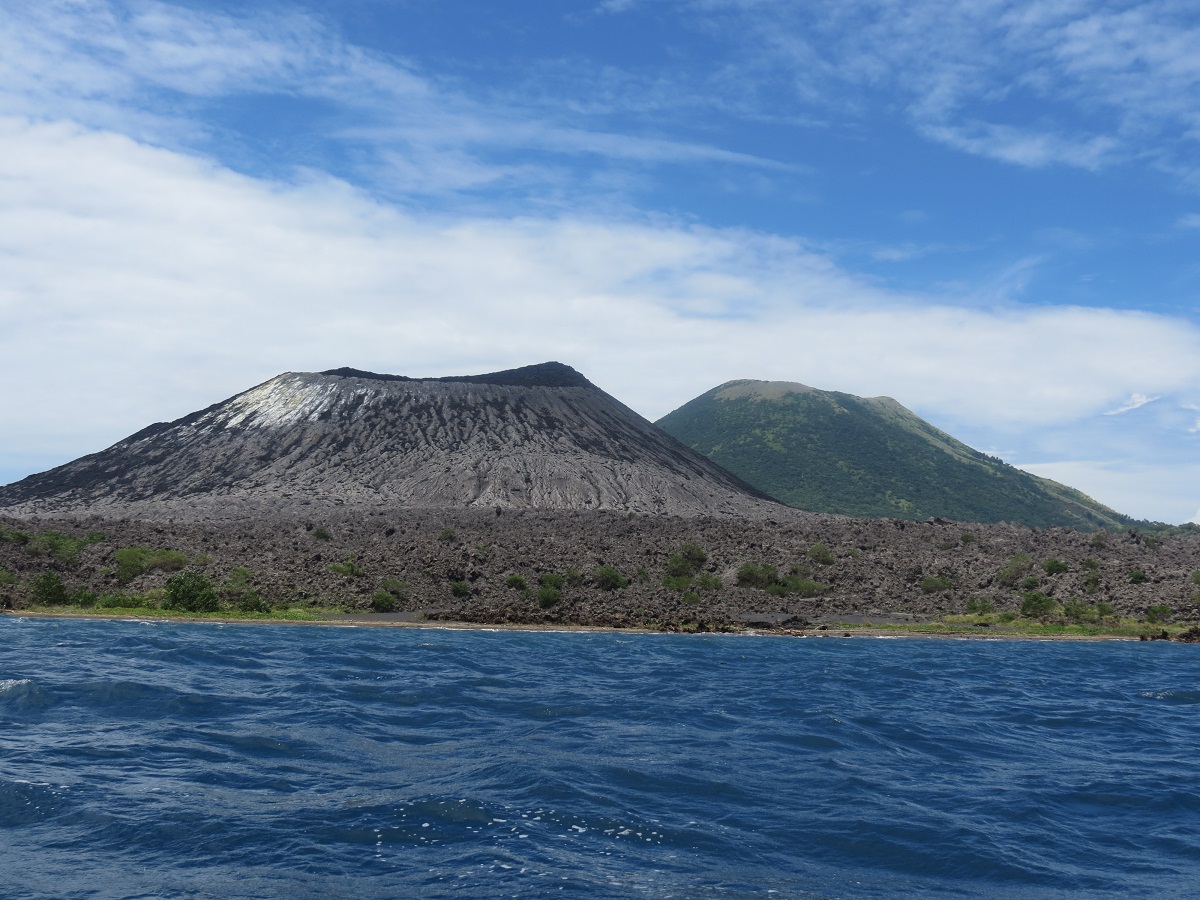 Spot the difference: Mt Tavurvur (on the left) erupted just weeks before our arrival

Challenges of a more elemental nature were in sight too – a trio of volcanos – Vulcan, Tavurvur and Kombiu – stood guard just next to the town like sentinels, overshadowing the horizon. In 1994 Vulcan and Tavurvur erupted simultaneously, coating the area with ash and meaning that Rabaul, survivor of the WW2, was finally abandoned and is now a ghost town, with its buildings and roads still visible, but practically deserted.

Just weeks ago, Tavurvur erupted again, this time caught on camera [there’s a YouTube clip of the whole thing] and the waters were still warm as we approached, with thousands of tiny pieces of pumice stone floating on the waves.

Later that night we bumped along rough roads in our minibus to witness the famed fire-dancing of the Baining tribe, where to a background of unceasing chanting and drumming, barefoot men in elaborate wide-eyed costumes danced wildly around – and sometimes on – a massive bonfire whose flames leap up into the night sky. A dance to attract spirits and commemorate special occasions – as well as being performed for tourists, like us – it was an incredible sight: part eerie, part exhilarating, and as we headed home the whole village was just gearing up to dance and party well into the night. 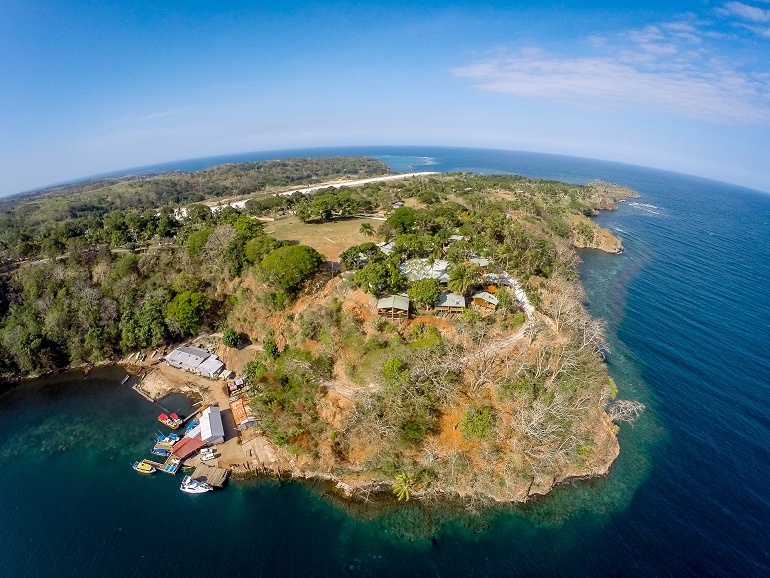 Tufi in all its glory, from the boatyard (bottom left) to the hotel on the top of the cliff and the runway behind – picture taken by drones owned by the guys at PNG Business network who were filming out there

Off to the Tufi dive resort

Our final stop was Tufi, just across the mainland. After a short hop on a tiny 24-seater plane we experienced possibly the shortest airport transfer ever: the Tufi dive resort is about 100 metres from the airstrip site and roughly three minutes after touchdown we were walking into the bar at the Tufi dive resort for welcome drinks. 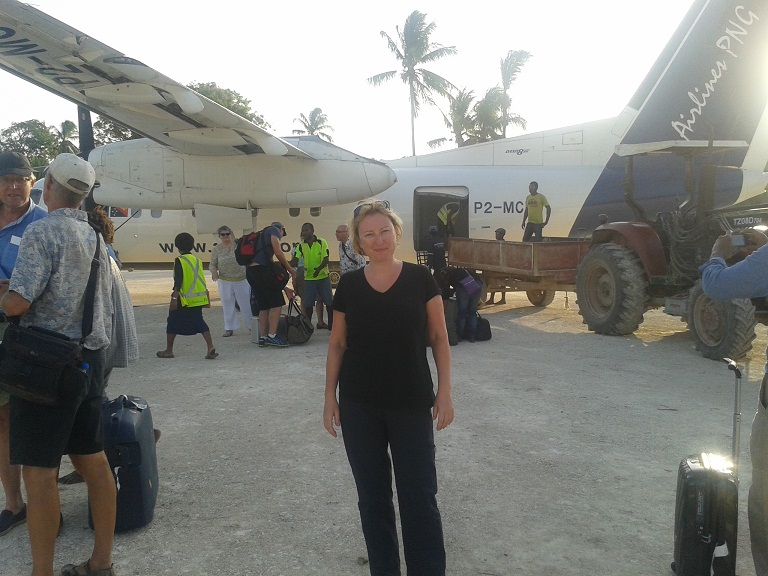 Landing at Tufi. The hotel is practically at the end of the runway

The view from Tufi are amazing: dinner is eaten with a backdrop of the river heading up fjords away from the sea and from my window I could see across the Solomon sea and beyond to the Pacific ocean. The hotel had a very relaxed, backpacker-style vibe: there was a huge breakfast room with books to borrow and a constant supply of juice and coffee, while the open air bar was on the decking wrapped round the building and full of comfy sofas where people unwound after a long day doing whatever they fancied. 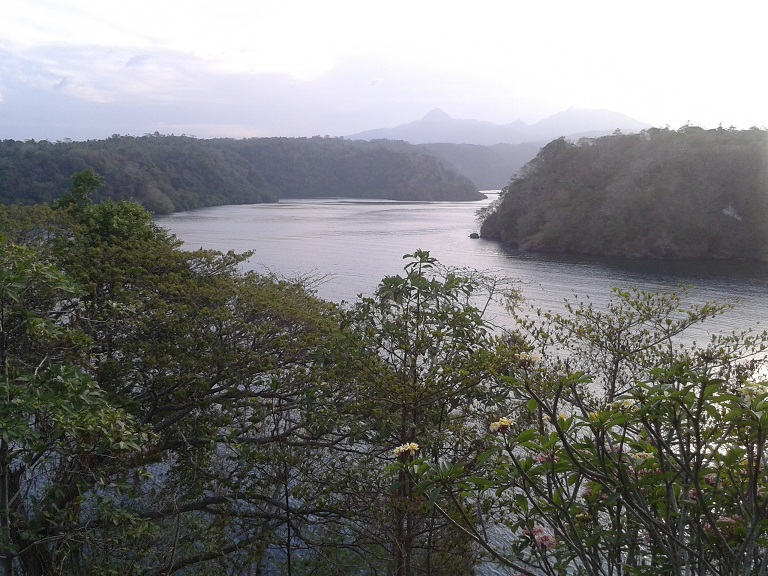 Tufi is famed for its diving, which the resort is keen to promote, and so some of us went diving to the outer reefs. Around half of us were soon ‘feeding the fish’ as the euphemism goes due to the rough seas, but down on the ocean bed things were thankfully much calmer.

Swimming among coral and brightly-coloured fish was a great antidote to sea-sickness and the crew did a great job of keeping an eye on everyone of varying abilities from newly-qualified divers to expects kitted out with latest in underwater filming technology. 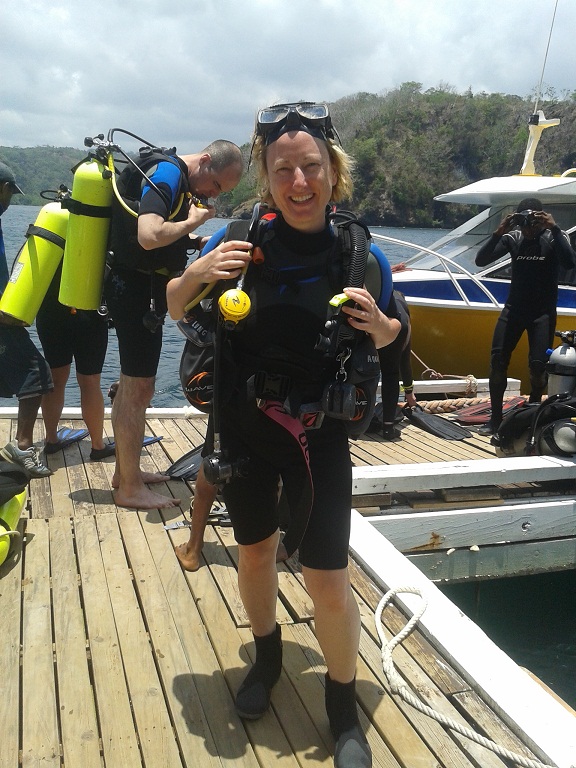 Our final day was a typical expat tradition – getting extremely drunk while swimming, snorkelling and sunbathing. Guests were ferried back and forward across the harbour to a beautiful sandy beach and treated to a sumptuous picnic lunch and gallons of beer and wine, much of it consumed in the waves amid gales of laughter.

Monday dawned and the big trip home begun – the 90 minute flight to Port Moresby, a five-hour layover there, thankfully filled in by an impromptu tour round the town to a shopping mall and its fascinating museum; a six hour flight to Singapore and then after a four-hour stopover there (including a swim in its pool on top of the airport), a 13-hour A380 flight to Heathrow.

After all that, plus the jangling effect of jumping through umpteen time zones, it took me a week to recover. But as totally unique holiday experiences go, it ranks close to the top for an unforgettable holiday. 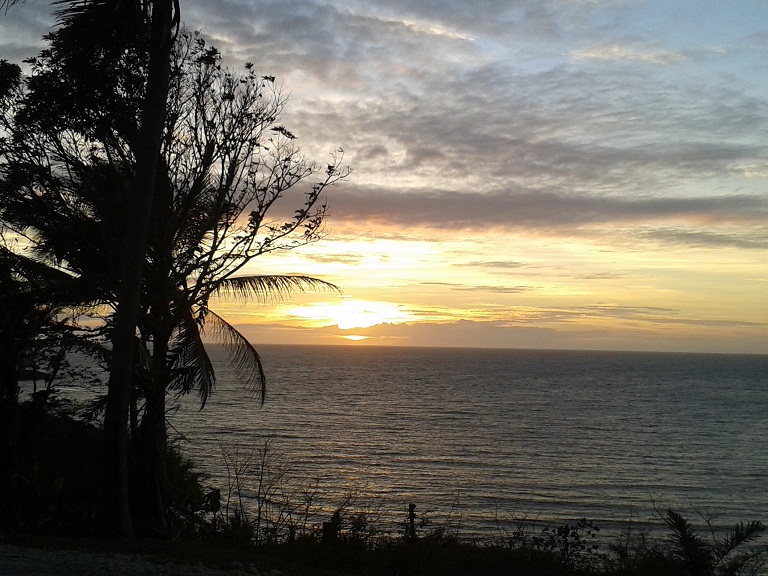 How to get to Papua New Guinea

Where to stay in Papua New Guinea

Our second stop was at Kokopo Beach, Rabaul, New Britain.

Finally we stayed at the Tufi Dive Resort in Oro Province.

If you love amazing adventure holidays then check out these other once in a lifetime holidays:

How to hike the Inca trail to Machu Picchu – and enjoy the journey!