It is rare that a holiday actually changes your life, but a week with Skyros holidays, in Greece, the original ‘alternative’ holiday destination, can do just that. From changing jobs or learning new skills, to getting married, ditching bad relationships and embarking on new careers, in the 40 years since Skyros first started hosting holidays on the Greek island of the same name, thousands of people have gone there to find inspiration and to find new meaning and direction in their lives.

The house at Skyros overlooks the beautiful bay

Recharge on a Skyros holiday in Greece

If that all sounds too hippy-dippy, then don’t worry: a trip to Skyros has all the holiday essentials of great food, great beaches, lots of time for swimming, sunbathing and sleeping. But it offers something so much more than your typical package holiday. As its website says:  ‘This is an adventure that opens the heart, expands the mind, recharges the body and uplifts the spirit’.

After a week at its beautiful Atsitsa Bay location, I had to agree. I’d performed comedy on stage, slept in a bamboo hut where the breeze came through the walls, practiced yoga in the open air, shared my hopes and fears with a group of strangers, laughed till I cried on a dozen occasions, ate my body-weight in fresh Greek yoghurt, gone hiking around the island and thoroughly disconnected from my life in London.

Our home for the week: Skyros holidays’ beautiful site in Atsitsa Bay, right on the Aegean sea

Recalling Skyros while back in the city is to instantly be transported to lying in the shade of an olive tree to shelter from the blazing sun; drinking morning coffee while overlooking the bluest sea; the swaying of my hammock as I curl up to read a book, and the light breeze coming through the bamboo sides of my hut, perched high on the hillside. You could spend the whole week simply ‘being’ if you wanted to, and several did, enjoying the total break from the outside world – there is no internet reception aside from a fixed line in the office for emergencies, and mobile phone coverage is patchy – and my phone soon ran down and stayed down all week.

However one of the main attractions of Skyros, as well as its remoteness and sense of community, are its classes which run throughout the week. If you’ve ever wanted to write a book or do a stand-up comedy routine, sing in public or try windsurfing, there is a course for you. You can wait until you get there to decide what appeals and there’s absolutely no pressure to have any knowledge or talent at your chosen courses at all. 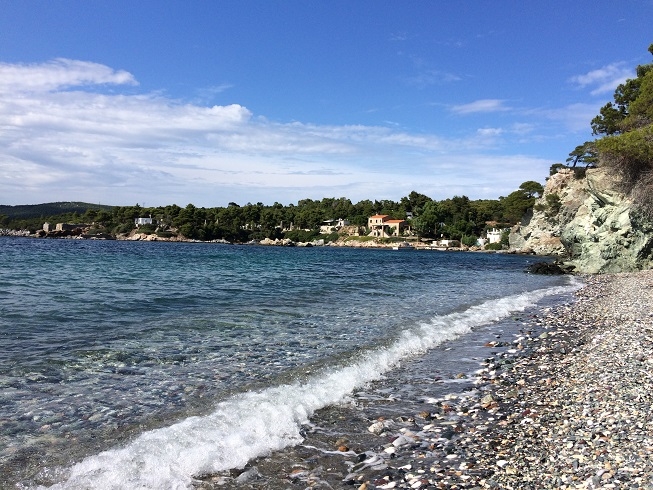 There are plenty of little beaches nearby to sunbathe on

Of the courses on offer I chose open-water swimming in the morning, and improvisation comedy in the afternoon, while others opted for stained glass-making, singing, mindfulness and wind-surfing. While swimming in the spectacular bay each morning was a wonderful start to the day, I particularly enjoyed the improv classes and haven’t laughed so much for ages: taught by David Bourne of Sprout Comedy, it was almost like two hours of parlour games: telling a story with everyone in the group taking turns to say just one word, or having entire conversations without the letter ‘s’. It was something I’d never tried before and I loved it, and even overcame my fears to take to the stage in the last night cabaret (the same stage where several years before Jimmy Carr decided to give up his day job to fulfill his dreams of becoming a comedian).

I had been told that it was the perfect holiday to go on if you were travelling alone and that was certainly true: more than half the other guests were on their own, (some single, some with partners back home) but thanks to the long communal tables at mealtimes and the many courses and activities on offer, you instantly got to know everyone very well. 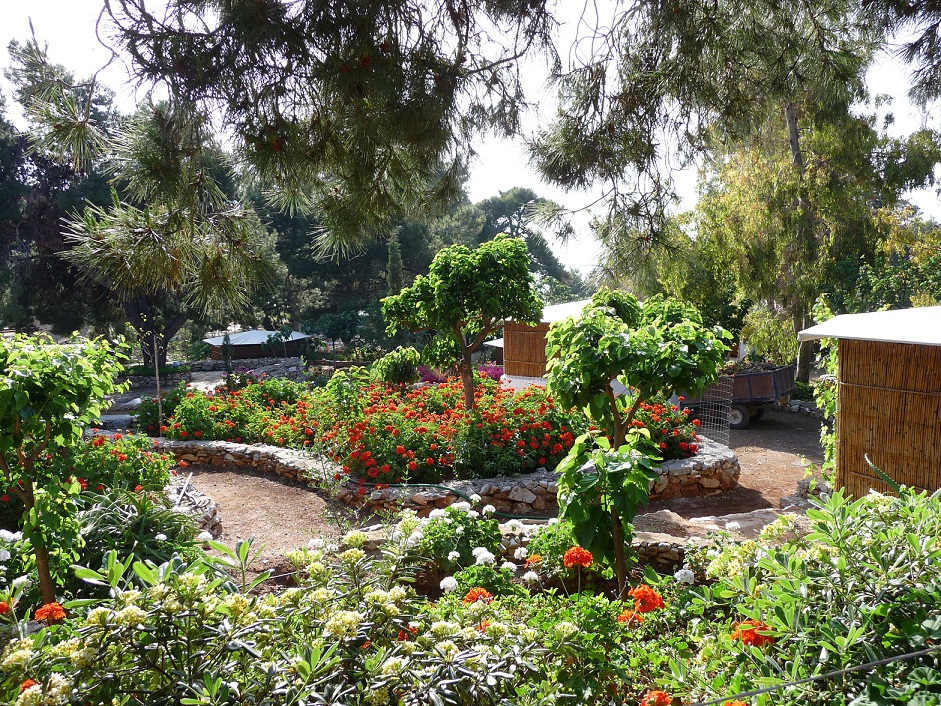 The site was almost entirely open air, with little paths and steps connecting the bedroom huts

Getting to Skyros island

The remote location of Skyros island makes it a lengthy trip if you don’t book on the 35 minute flight from Athens airport to Skyros, although some people prefer the romance and wind-down time of the overland journey (which is bus-ferry-bus-ferry-bus and takes half a day). This year both the flight and the ferry arrives early in Skyros but when I did the trip we arrived after dark and it was a bit of a shock to discover that I was going to be sleeping in a bamboo hut with outdoor loos and showers. (There is a main house which has less basic rooms and the luxury of ensuite bathrooms). 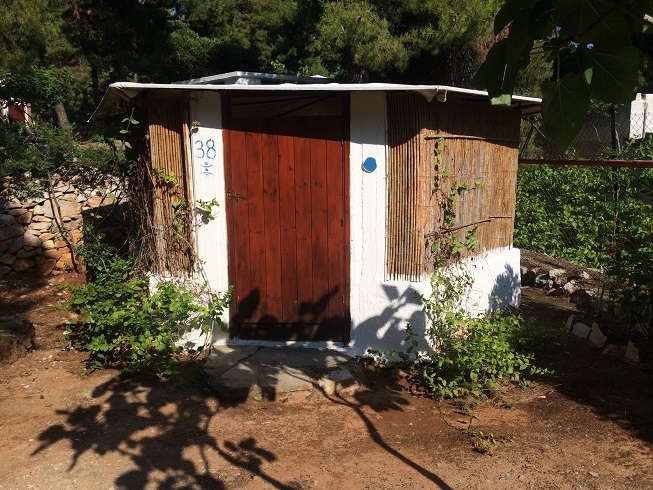 My little hut home for the week

Of course once morning dawned, the beauty of the lush, green site, with its little paths, shaded corners and hammocks and all overlooking the sparkling blue Aegean sea was enough to make me forget the journey. It was incredibly calm too – no traffic, no airplanes, no phones, nothing of the daily background noise of hustle and bustle which gradually wears us down. It was as if we’d gone to the other side of the world.

I soon settled into a daily routine: early-morning outdoor yoga in the meditation circle at the top of the site (OK, I thought about it from the comfort of my warm bed a few times more than I actually made it), followed by breakfast: white whipped mountains of fresh Greek yoghurt, golden honey, fruit, eggs and all tasting so much better under the early morning sun. I was in the volunteer group for table-clearing (everyone happily mucked in with various chores although there were staff to do the actual cooking) and after that, I’d head off to a coffee in the lovely clifftop cafe just across the road. 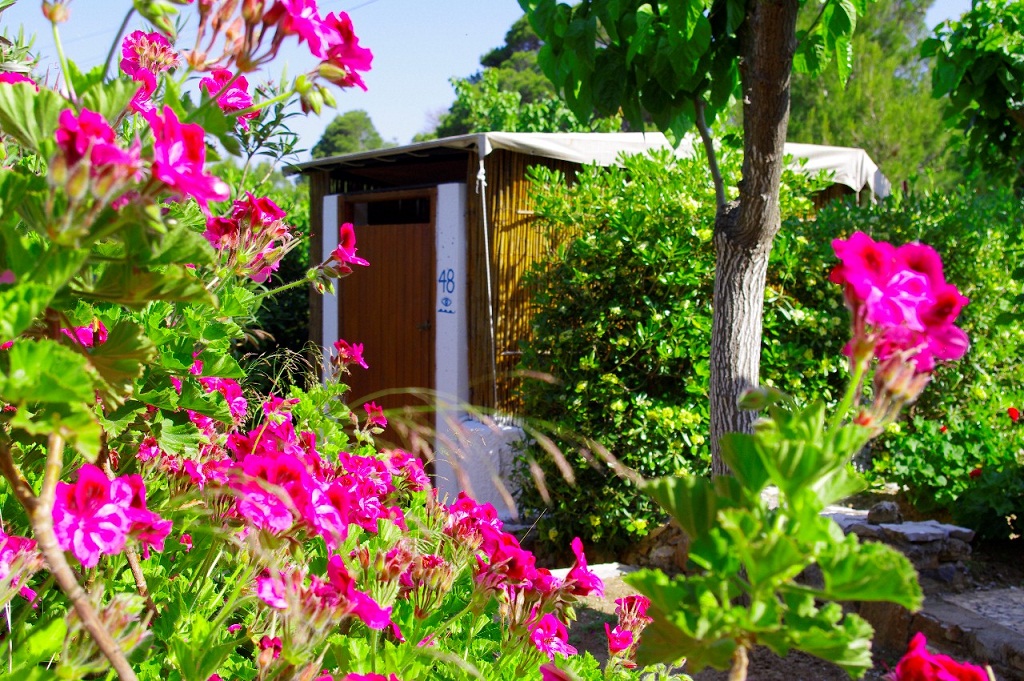 The bedroom huts were basic but beautiful, and it was delightful to have an afternoon nap with the warm breeze coming through the bamboo walls

When we weren’t doing classes, or eating or sleeping, there was a lot of free time: people would go for a swim in the bay, spend the afternoon sleeping or reading in Atsitsa’s many hammocks, and there was an afternoon trip to Rupert Brooke’s grave and an evening at Skyros town. There was also a music room and library where  I dusted off my rusty piano skills on the keyboard, and the beach and restaurant 15 minutes walk down the deserted road (the nearest wifi spot) was the site of several long boozy lunches – evening’s entertainment were pub quizzes, an impromptu concert, games and chats into the night.

A unique aspect of Skyros were the ‘eokos’ groups (pronounced eek-oss), where we’d all get into groups of five or six and once a day would meet up to talk and listen. The idea was not to comment on what people said, or offer advice or opinion, or help, or judge: just to listen. There was no compulsion to join a group, or speak yourself if you were in one, but just to let people say whatever was on their minds, knowing it wouldn’t go any further than the group. 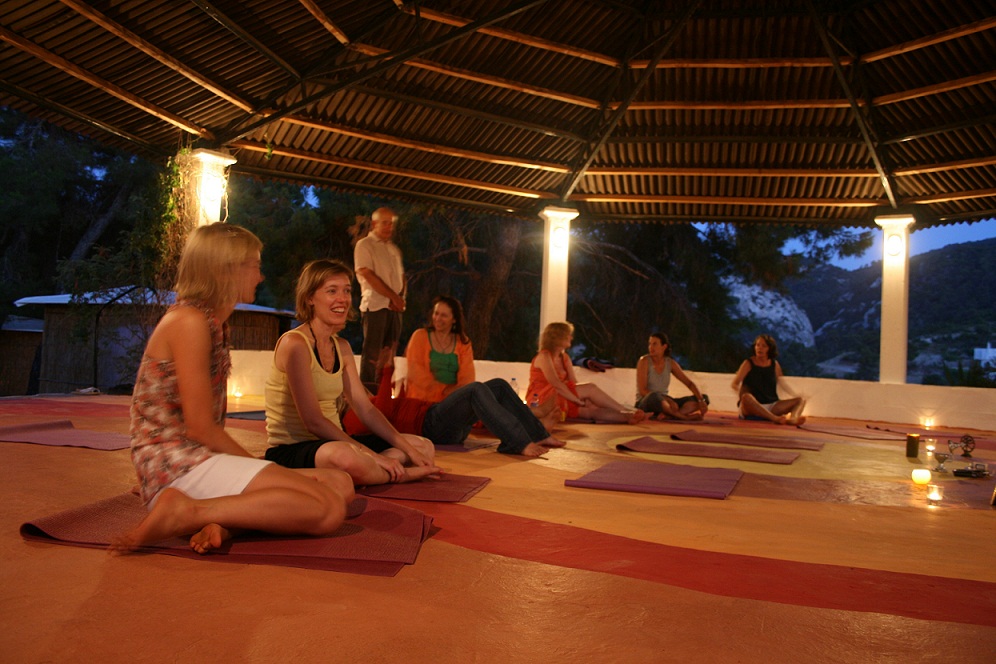 The mediation circle at the top of the site was the place for anything from yoga to meetings, singing and just relaxing

My first eokos group was fairly nerve-wracking: the thought of just rambling on in front of virtual strangers was not my idea of a holiday and I was pretty sceptical. However I came to see the groups as something to look forward to every day. It’s very rare you get the chance to speak without being interrupted, to talk without someone jumping in to try and offer their thoughts, or well-meaning advice, or to say: ‘You think that was annoying, wait until you hear what happened to me!’ I found that merely articulating thoughts or feelings was often enough to deal with them: I didn’t need people’s views to make the issue better in my mind, and it was fascinating listening to other people’s issues and to be there in silent support rather than trying to ‘fix’ things. There are things you can say to complete strangers which you can’t say to your friends and family, and there were a few couples who held their own separate eokos groups while at Skyros as they could say things without the other person butting in, or offering advice.

Even outside the eokos groups, the general atmosphere at Skyros was of support and sharing, that you could sit anywhere at mealtimes and be welcomed into the conversation; or join any group at the bar without feeling you were intruding. The gender split was around 60:40, unlike many yoga or singles holidays which are mainly all women, and the age range was from mid-20s to mid-50s, with most people in their 30s or 40s. 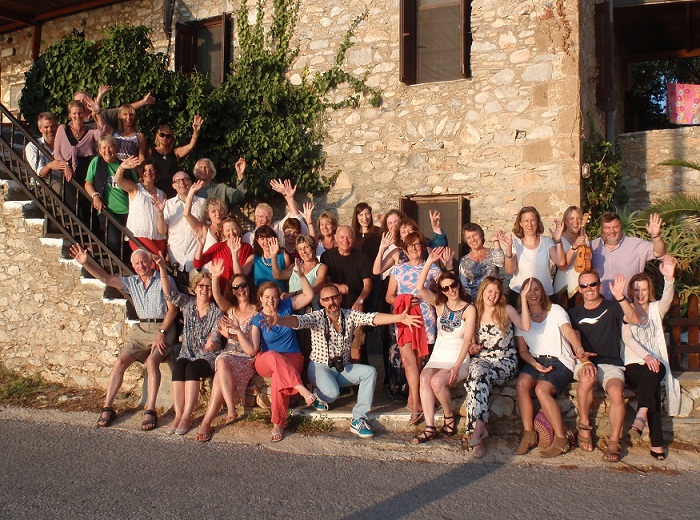 Our group waves goodbye to an amazing week

A week felt like a fortnight and I was sorry to leave (the return journey flew by, mainly because everyone was chatting away like old friends by now) but such are the links made in Skyros that I’m still in touch with many of my fellow travellers. Skyros is unlike any other holiday and it is perfect if you want to reassess your life, find out where you’re going, discover your life goals, deal with problems or take stock. However it works equally well if all you want to do is lie on a beach with a book.

A week at Atsitsa costs from £675 and two weeks starts at £1,295, price includes accommodation (shared in busy weeks, upgrades and single rooms available), three meals a day, all courses and activities, and early morning yoga. Flights and transfers extra. Courses for 2018 include Yoga for Real Life, The Power of Laughter, The Joy of Singing, Art from the Heart, Comedy Improvisation, How to Build a Novel, Mindfulness, Short Fiction, Windsurfing, Massage and Reflexology, Mosaics, Alexander Technique and Digital Photography. Full details at http://www.skyros.com

Interested in life-changing holidays? Check out these amazing destinations: Sailing around Turkey with SCIC Sailing; Dolphins, rum and yoga – how to holiday in Mauritius; A fortnight exploring Montenegro; How to hike the Inca Trail to Machu Picchu; My epic food tour of Japan; My perfect Jamaica holiday;