Home / Fitness and weight-loss / Equinox gym London: super-pricey but it will get you super-fit

But does that make it one of the best gyms in London? It doesn’t even have a pool for a start, so if you’re looking for a gym with a swimming pool, you might want to look elsewhere. But as it was a gym near me – just across the road from my office in fact – then I couldn’t resist taking a look.

The US fitness chain Equinox is huge across America and is not going to apologise for its eye-watering prices. (Equinox Kensington has a sister club – E by Equinox – in St James’s which is purely for personal training and there’s also a newly-opened Equinox Bishopsgate near Liverpool Street). 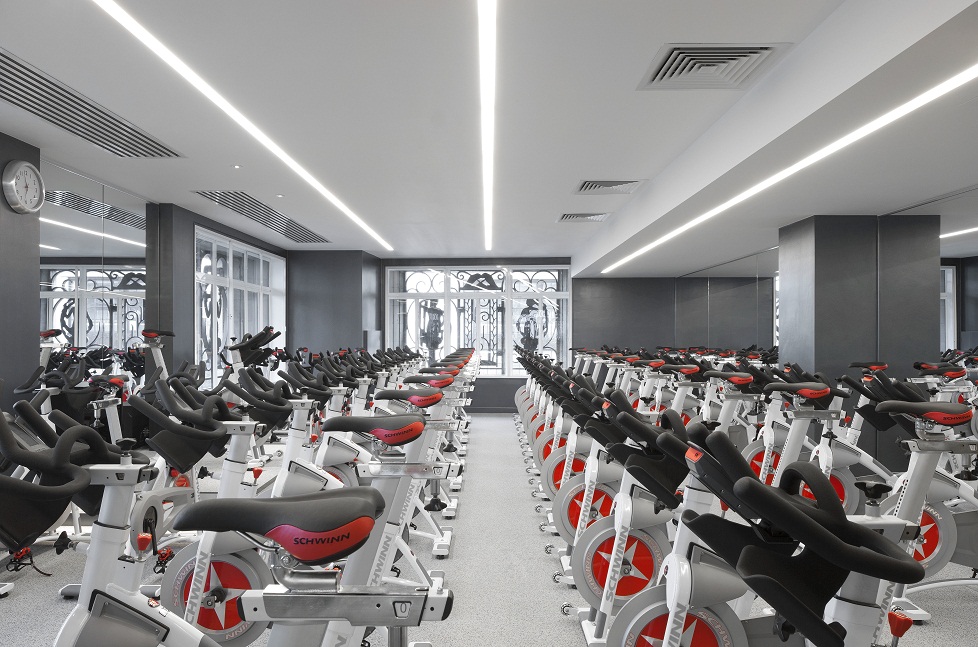 So you pay your £240 a month membership fee for Equinox Kensington – it’s £260 a month for worldwide membership – plus a £400 initiation fee (there are special offers at Equinox too so it’s worth checking the website) and the rest of the cost for the month, and embark on your journey of transformation.

Which means that if I wanted to cross the road for a workout this evening, it would cost me £412.10 just to get through the door (the Equinox website helpfully works it out for you). 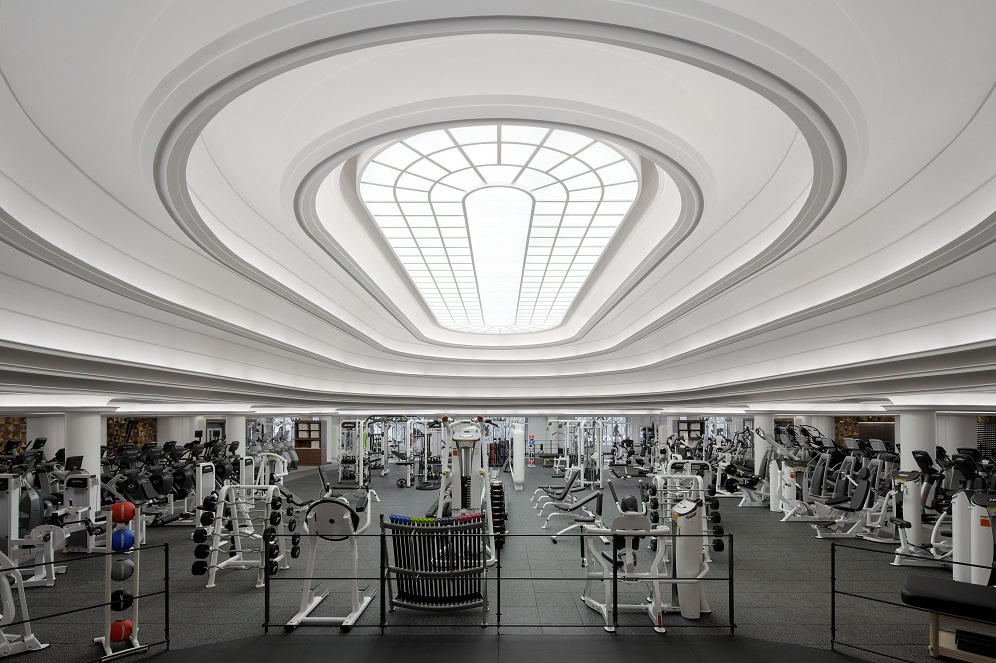 The rather impressive Art Deco-style workout space at Equinox gym London in Kensington.

This manages to make the prices charged by other upmarket gyms look positively budget, especially if they have a swimming pool too.  But do they have an anti-gravity treadmill? Or fridges containing chilled eucalyptus towels in the gym? Or free tampons and razors in the changing rooms?

They do not. So pay up and shut up. And check out the classes list. They take their classes extremely seriously here. And if you were paying £6.61 a day, every day, to be a member here, then you would too (put that way – it doesn’t seem so expensive. Ditch two posh coffees a day and you’re there). 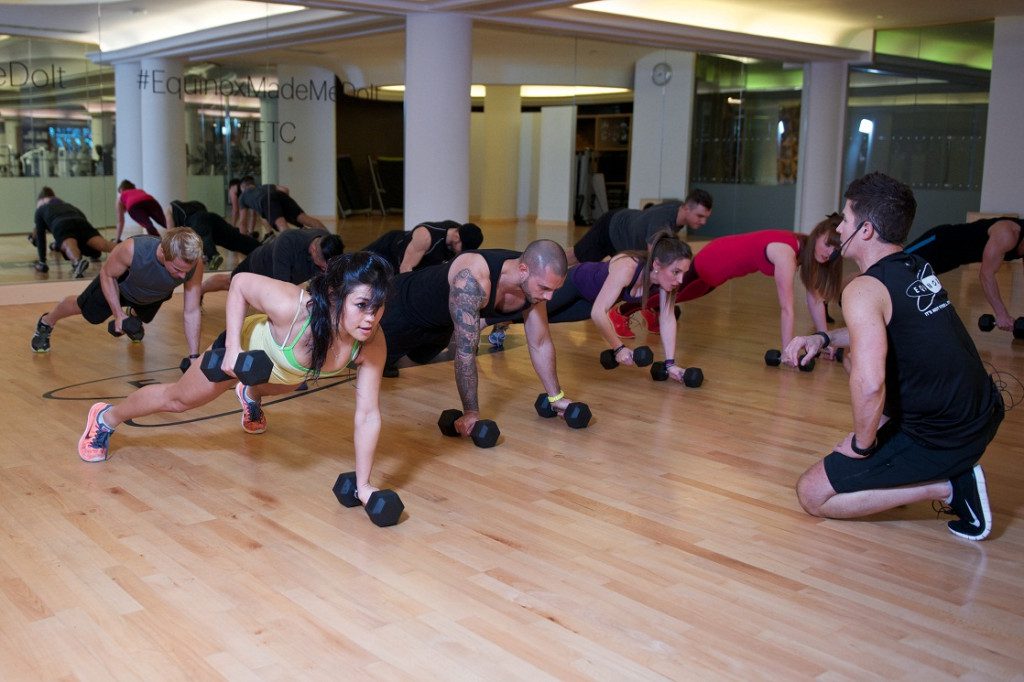 Equinox has more than 100 classes a week, guaranteed to make you super-fit. And super-sweaty.

Making the most of my free pass at Equinox gym London

Thankfully I managed to get hold of a free three-day pass which was being given out at the hairdressers just along the road. So I had three days in which to get fit and feel like a millionaire at the same time. Could I get fit in three days? With the clock – and my free pass – ticking, I decided to make every moment count.

As I headed toward the gym on the morning of my first day, I walked past David Beckham, looking very dapper in a flat cap and tweed suit. He hadn’t been to the gym but to buy a coffee in Le Pain Quotidien but even so, I take it as a good sign. My first day at Equinox and I am already associating with very fit multi-millionaires.

If you like this review of Equinox Kensington then check out these other health and fitness reviews:

A most relaxing spa break at Ragdale Hall, Leicestershire

Park House hotel, West Sussex: a hidden gem destined not to remain hidden for much longer

The entrance is rather underwelcoming, via a plain-looking reception area from which you take a lift to the fifth floor, one floor below the famed Kensington Roof Gardens (sadly now closed).

The gym at Equinox Kensington

However the gym space itself is spectacular. It is a vast space with windows overlooking the High Street and an Art Deco ceiling designed like an upside-down running track.  Take that, rival chains!

The machines are, as you’d expect, state of the art devices designed to make you sweat, a lot. So there are treadmills and cross-trainers and stepping machines and moveable staircases and something which is a cross between a climbing wall and a conveyor belt. And of course let’s not forget the rather space-age concept of the anti-gravity running machine, which is basically a treadmill with a supportive cover which you zip yourself into and which holds you aloft. But it sounds groovy though. 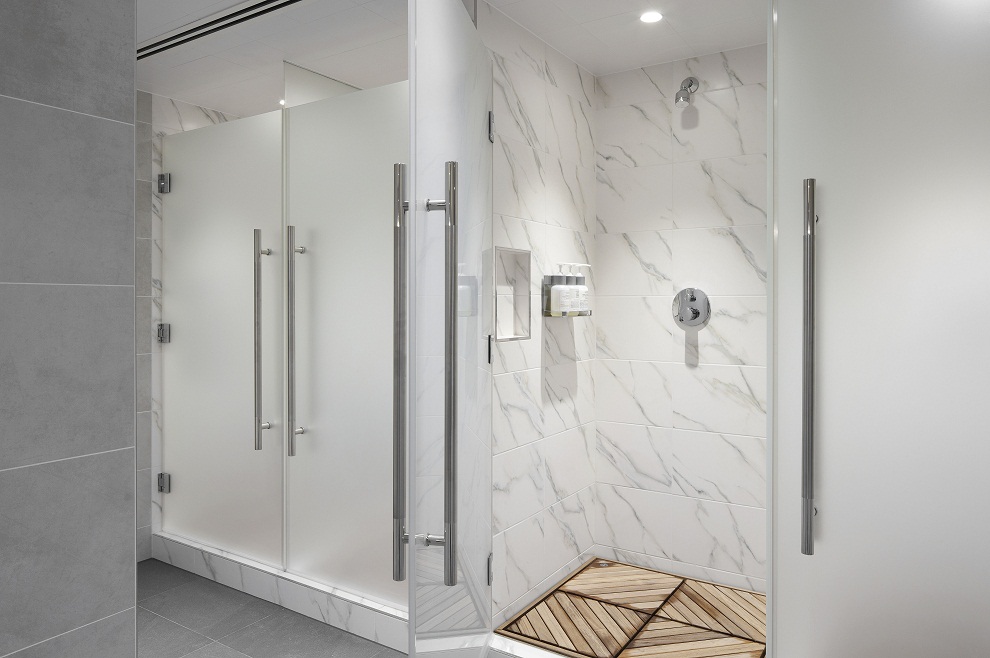 The changing rooms are very smart indeed; a steam room, huge walk-in showers stocked with Kiehl’s products and plush wooden lockers with a very clever locking system which does away with the need for keys and coins.

The plushness of the decor is matched by the sheer physical perfection of the people. There are some incredibly fit-looking people here indeed and not just the personal trainers who wander around looking buff or grapple on the floor with clients to give them a thorough post-workout stretch.

The members themselves are really spectacularly fit and obviously take their training very seriously indeed. I suddenly feel as if I need a few months’ intensive training in a completely different gym just to get into a decent enough shape to be able to work out here.

But there is no time like the present. Gym equipment is all very well but it is the quality of the classes and its trainers which Equinox is staking its reputation on and which will keep people coming back again and again.

The class timetable looks extremely impressive – more than 100 classes each week from 7am until 7 or 8 each evening, and three days is only enough time to scratch the surface.

Tabata looks enticing and alarming in equal measures, described as ‘a courageous, daring, and dynamic conditioning experience’ which has ’20 second bouts of high intensity training followed by 10 seconds of rest at four minute intervals, to increase athletic performance, boost VO2Max, & decrease body fat. The Tabata Protocol is proven to physiologically transform your body.’ 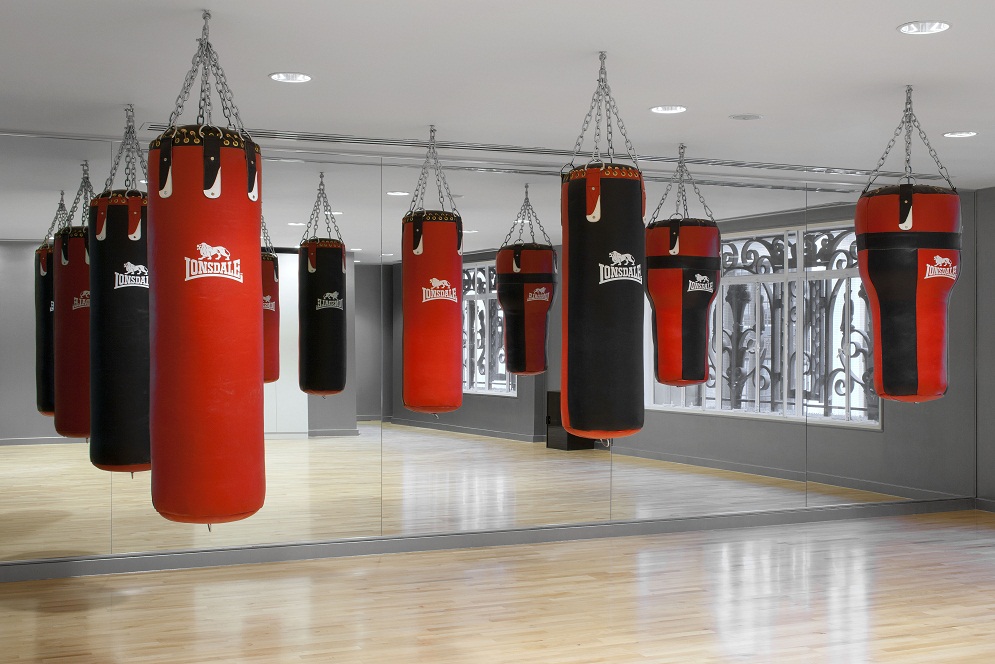 The boxing studio, where alarmingly-named classes such as Boxing Boot Camp, Counter Attack and Lights Out! take place.

There is also Whipped which involves shaking a massive rope around, H.I.T. – high intensity training – and The Workx which promises ‘treadmill exhaustion’ and to  ‘leave nothing but the sweat and fat behind.’ Yipes.

I start with Chisel’d – a class which involved lots of steps, weights, bars and a fair amount of movement and co-ordination. Thankfully the other attendees were more of the normal rather than super-fit variety so I got through it without too much trouble and felt pleasingly exhausted afterwards.

I plumped – possibly an inappropriate verb – for Tread & Shred at lunchtime, and this really was a tough workout. If pitched in the style of a movie concept the tagline would be ‘spinning on treadmills’.

Five of us were assigned a treadmill each, given earphones linked up to the music and our trainer, and ordered to sprint, run uphill, jog and sprint again for an hour – a lot of calories and sweat was expended.

Going for the Barre Burn…

Too exhausted to attempt another class that day, I tried out Barre Burn the following day thinking that might be more relaxing. I was wrong. It was less energetic but not less of a workout for that, using long heavy bars to support you while you attempted plies and stretches which worked every muscle and made my legs shake.

But a few months of that and I really felt my legs might turn into the long, lean legs of a ballet dancer.

I found the same with the Dynamic Vinyasa yoga class, which looked simple but which was extremely challenging for me, a yoga newbie, but which I did think would actually fulfil Equinox’s  ‘transformational’ boast.

Again, it was a hour of deceptively simple-sounding stretches and poses but which when put together in a fast-moving routine I found almost impossible. However I gamely ploughed on, only feeling slightly pathetic when I looked around while lying on my tummy and everyone else in the room was doing a gravity-defying handstand on their forearms.

Equinox’s cycling studio. Minus all the sweaty people.

Cycle beats on the final morning – Equinox’s version of spinning – was as you’d expect, a seriously challenging workout which left me exhausted but very smug indeed when I wobbled into work later on.

Members would also get a personal training program, a thorough body analysis and all the encouragement they need to craft that finely-honed, uberfit look.

At the end of the three days I surprised myself by being seriously tempted to join and fork out for the hefty membership fee. The trainers were extremely good at their jobs, know exactly how much encouragement to give and the effect it would have on your body.

The knowledge that if I didn’t go for a few days I would have thrown away £20 or more would have made sure I would go all the time rather than being an absentee member.

But in the end I decided I just didn’t want the pressure and the guilt that would come with paying so much money when I could just go for a run in the park for free.

Every morning, every lunchtime and every evening after work I would be feeling the ‘ought’ of Equinox telling me to get in there and burn some calories. During the three trial days I didn’t got out with friends once. I didn’t want to have to decide between a Friday night drink with colleagues or making it to the last Tabata class of the week.

Back to running around the park it is then. But if those lottery numbers come up…

Information and how to get to Equinox Kensington

Take the Tube to High Street Kensington (Circle and District lines), turn right out of the station and then take the first road on your right (Derry Street). Equinox is down the road on the right hand side opposite the Daily Mail/Associated Newspapers building.

If you’re looking for a hotel in central London to stay in during your stay then look no further:

A relaxing luxury spa break at Corinthia hotel, London; One Aldwych: a Lion King slice of luxury in London’s West End; A stay at St James’s hotel and club, St James’s, London; A five-star luxury stay at The Stafford hotel, St James’s; A room (and cocktails) with a serious view at ME Hotel, London; The Gore hotel: rock and roll history in Kensington;

After all your hard work, why not show off your fitness at one of these amazing holiday ideas?

If you liked this review of Equinox gym London then Pin It! 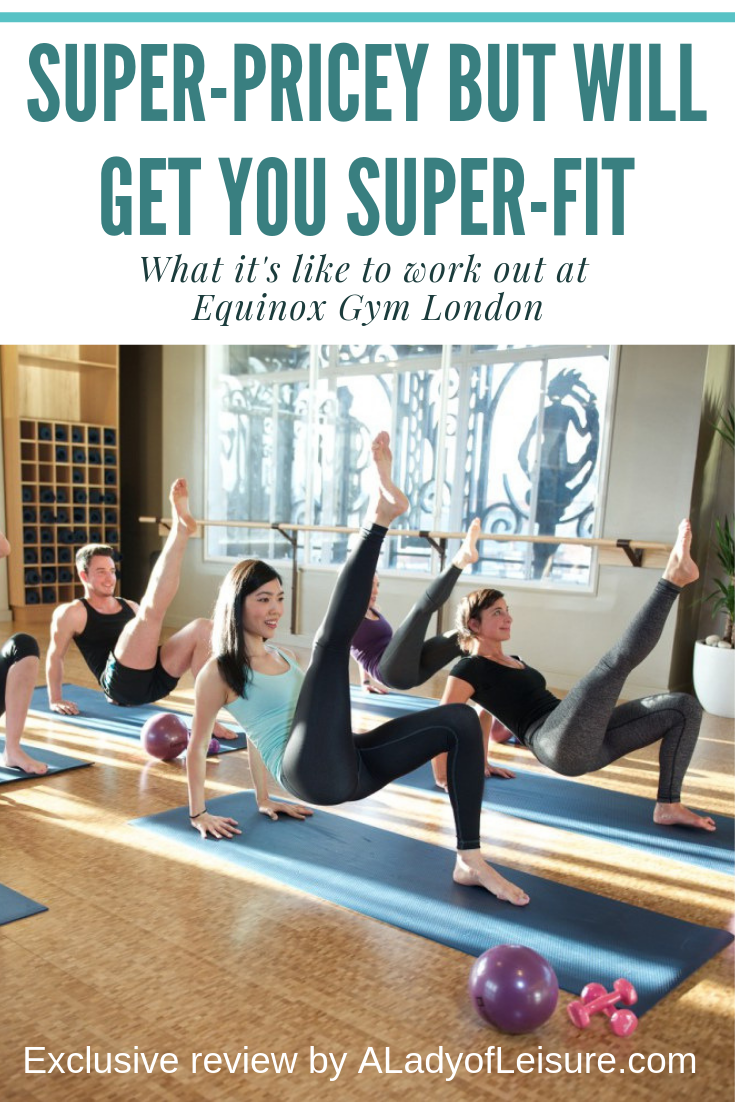 One thought on “Equinox gym London: super-pricey but it will get you super-fit”