Home / Restaurant reviews / A birthday lunch for a Bridge (me) at the Pig at Bridge Place, Kent

You never forget your first Pig, as the old saying doesn’t go, and with such fond memories of my stay at The Pig near Bath (check out my review ‘A heavenly, foodie, country retreat‘) I was very excited to discover on a recent trip to Kent that I would be close to The Pig at Bridge Place, one of the more recent additions to the Pig chain of hotels.

Even better, the Pig was located in the town of Bridge, and as my surname is Bridge it seemed that there could be no more fitting venue for my birthday lunch. 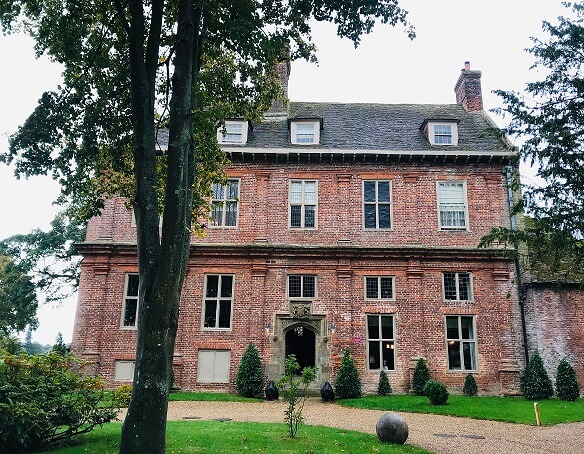 The Pig at Bridge Place is in the historic village of Bridge in Kent, and parts of the building date back to 1638 when it was one of largest houses in the county

For those yet to discover the Pig hotels, they are a collection of ‘restaurants with rooms’ established by Hotel du Vin founder Robin Hutson and his wife Judy. Backed by Ineos’ billionaire businessman Jim Ratcliffe, the Hutsons opened the first Pig in Brockenhurst, New Forest, in 2011 and have been opening at a rate of about one a year ever since. The group now has Pigs in Hampshire, Somerset, Dorset, Devon, Kent and Cornwall (with one in Arundel, West Sussex, opening soon) and fans of the hotels – of which there are many – tend to go around ‘collecting’ them. (The Hustons-Ratcliffe team is also behind the much praised Lime Wood hotel and spa in the New Forest). 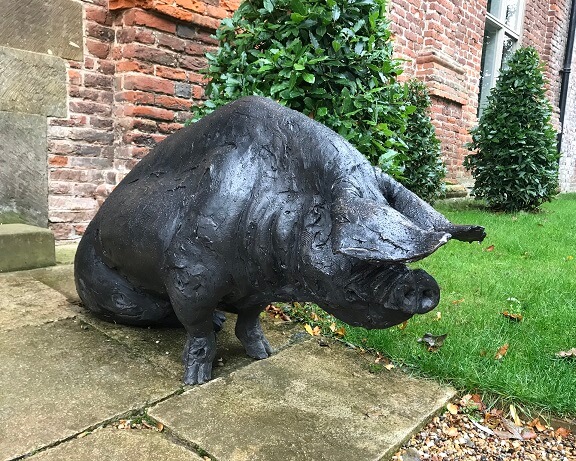 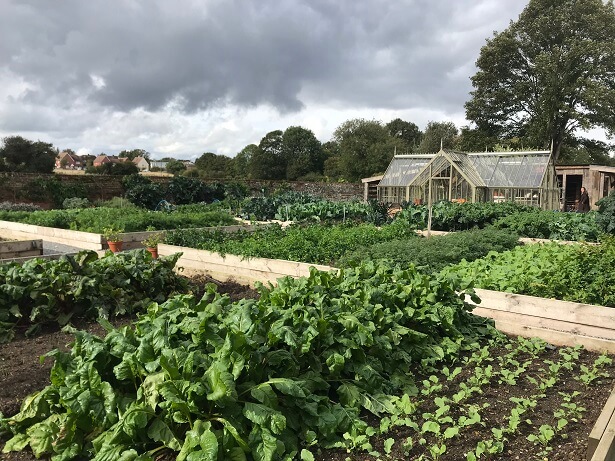 Like the other Pig hotels, the Pig at Bridge Place has an extensive kitchen garden which supplies the restaurant on a daily basis

Every Pig has its own individual style but they are instantly recognisable by their shabby chic style (think squashy sofas, open fireplaces, mis-matching furniture and Farrow and Ball hues), large kitchen gardens which provide fresh, local produce for the restaurants and Instagrammable bars with home-made liqueurs in colourful glass bottles. 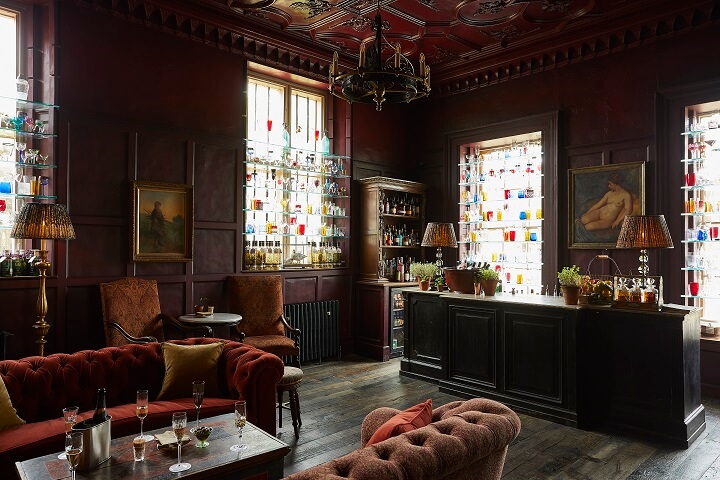 To arrive at a Pig hotel is to feel instantly relaxed, as if you’ve been invited to a friend-of-a-friends country house for the weekend and are expected to do nothing more than to curl up in a corner somewhere with a book or a board game and, if you’re feeling particularly energetic, a brief stroll around the surrounding fields before rewarding yourself with a drink or dinner, usually both. The Pigs aren’t cheap but they are friendly and comforting and indulgent and exactly what we all could do with right now.

Booking a birthday lunch at The Pig

Hence my excitement at finding out I would be very near to the Pig at Bridge Place in a post-first-lockdown birthday trip to the Kent coast. However my anticipation was dimmed by a rather snooty person on the central reservations phone line (I much prefer being able to phone a place directly, as they are usually far better informed and you feel connected to a place rather than an anonymous office miles from where you’re trying to call). When I asked if it was possible to have lunch there on my requested date it was a flat ‘No’ and nothing along the lines of ‘but instead how about an earlier time, or maybe in the evening, or another day…?’ – nothing to show they might be happy to see me at some point. 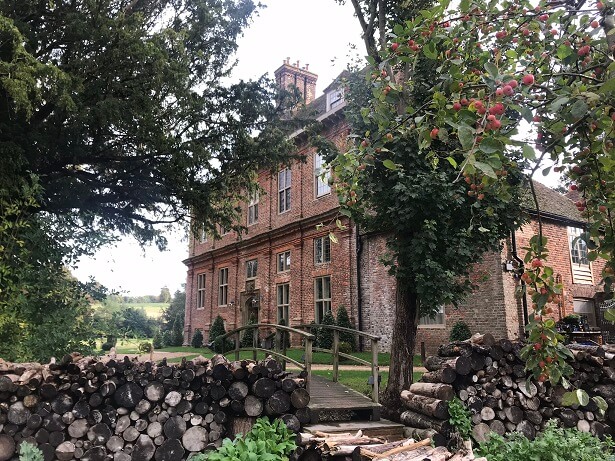 This was very un-Pig-like and I nearly gave up on the whole thing. Clearly things had changed since I last stayed at a Pig where staff were charm itself.

However once in Kent I couldn’t resist a trip to the village of Bridge itself – mainly to get some daft pictures of my and my mum at the Bridge village sign – and then having seen the sign to the Pig I couldn’t resist driving up to the hotel just to see what it was like – and then having seen what it was like I couldn’t resist going in and asking if by any chance they had any spare tables. And the cheerful and friendly waitress instantly said: ‘Of course! Just wait five minutes and we’ll be ready!’ and after five minutes exploring the grounds we were led to a lovely table for two and were all set for a marvellous afternoon. So it just goes to show: a) central reservation lines aren’t the best idea and b) it’s always worth asking on the day. 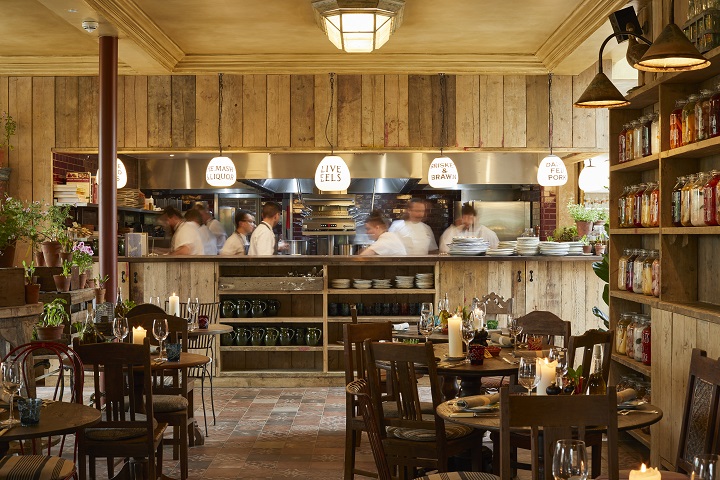 The restaurant at the Pig at Bridge Place differs from the others in that it has an open kitchen but still has the relaxed, farmhouse feel of the others

The menu at The Pig at Bridge Place

The menu was huge and full of delights such as ‘Piggy Bits’ (crackling with apple sauce and hock eggs), homegrown cured meats, pork chops and duck breast. However it wasn’t all meat-based: there was a large range of dishes from the ‘garden, greenhouse or polytunnel’ as well as several fish dishes such as boat-caught ray wing and Rye Bay scallops.

While I was dithering over the selection of starters we were each given a complimentary glass of Gusbourne English sparking wine which was a lovely touch, and then rather unexpectedly a vast dish of starters arrived which saved me having to chose between them. There were the fabulous Piggy Bits which were as good as I remembered them from The Pig near Bath, some homemade salami, mini Scotch Eggs and olives and was enough to make me panic that I wouldn’t have enough room for my main course. 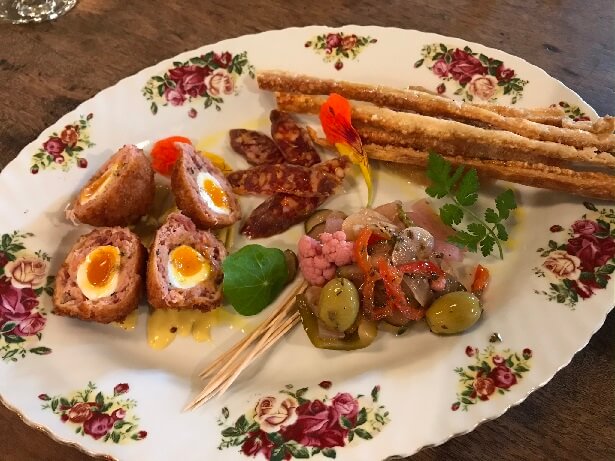 Thankfully I magically found room as the hearty special of beef stroganoff was perfect for this bright but fresh autumn day and was delicious. Sadly my mum’s Longfarm duck breast with Genovese basil risotto explicably arrived swimming in jus which wasn’t listed on the menu and completely spoiled the risotto. I think it’s possibly the first (hopefully only) time I’ve seen risotto drenched in what was practically gravy and it was not a great addition – thankfully the waitress completely understood and was able to replace it with a jus-free version which was excellent. 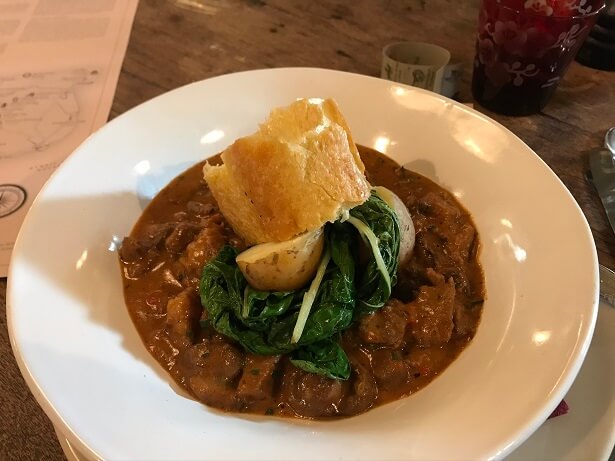 Jus-gate notwithstanding, everything else was impeccable, from the speedy but not-rushed service, the friendly staff and the overall look and feel of the open-plan restaurant which was typically ‘Pig’ with lots of plants, wooden furniture and glass jars with interesting things in them all around the walls. 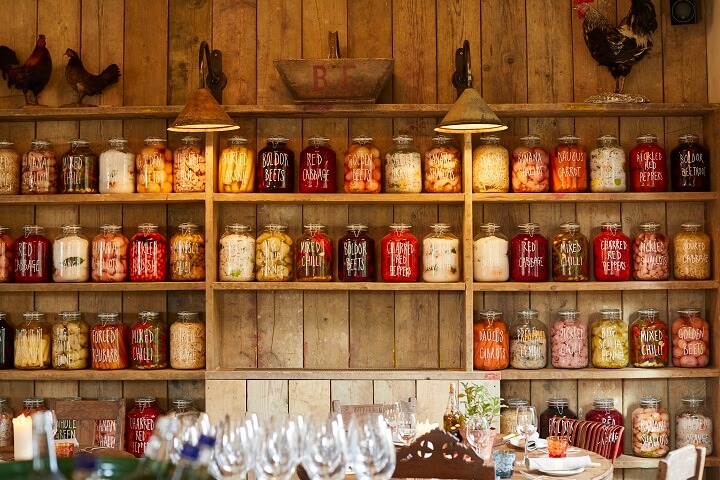 The walls of the restaurant were covered in colourful pickle jars

Wanting to extend our time at Pig as much as possible, we headed into the main hotel and found a lovely corner in one of the lounges to linger over excellent coffee, ‘Piggy Fours’ chocolates and to people-watch. 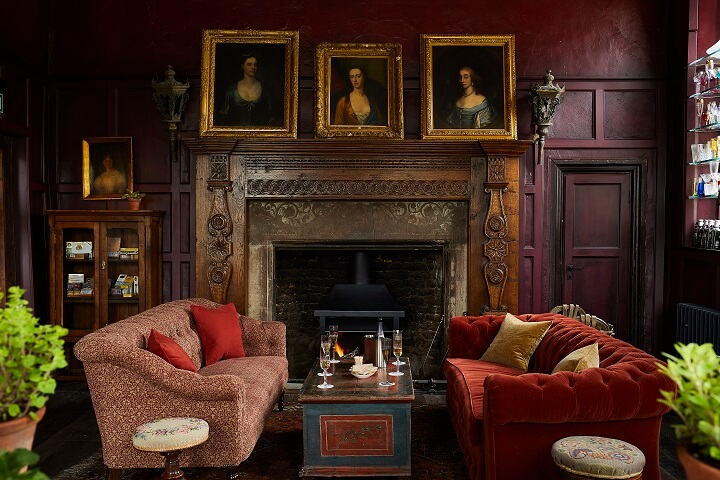 Relaxing at The Pig at Bridge Place

There was a group of women having birthday drinks, a guy sitting on the sofa by the fire poring over a massive text book and various couples playing board games, trying out the cocktails or happily reading in silence. It all seemed idyllic and a world away from Covid concerns (although there were masks, antibacs and social distancing everywhere).

Before heading off I discovered that the loos were plastered in posters from the 1960s when Bridge Place was Kent’s foremost rock & roll club venue, hosting everyone from Led Zeppelin, The Kinks, The Moody Blues, Manfred Mann, The Yardbirds and many more. It was a great nod to the building’s recent history and having fallen on hard times it’s great that the Hutsons and the rest of the Pig team have restored it to life. 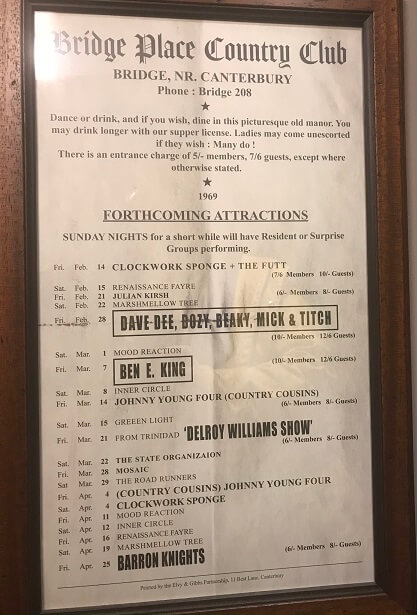 It had been the perfect birthday afternoon and probably even nicer due to having thought it wouldn’t be possible (and looking back, even more perfect to have squeezed in a visit between the lockdowns). The only things left to do was to find the Bridge village sign and strike a pose… 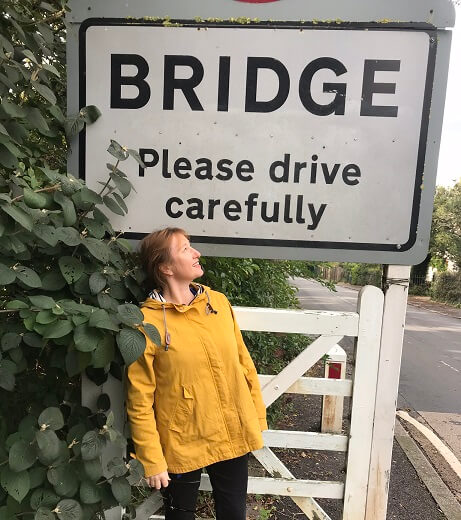 As my family name is Bridge, I couldn’t really visit the village of Bridge without taking a few pictures to commemorate the occasion…

Hotel information and how to book The Pig at Bridge Place

As well as the restaurant, the Pig at Bridge Place has seven bedrooms in the main house, 12 rooms in the Coach House, two family-friendly lodges and The Barn, a rustic romantic two-storey hideaway in the old stables. There are also seven Kentish Hop Pickers’ Huts stilts alongside the river in the grounds, each has been made from reclaimed materials and has a double-bedroom with fitted bathroom and wood burning stove.

A new Pig is currently being planned at Madehurst Lodge near Arundel, West Sussex

If you liked this review of lunch at The Pig at Bridge Place then check out what it’s like to stay at a Pig Hotel here: The Pig near Bath: a heavenly, foodie, country retreat;