My arrival at The Pig near Bath was one of the most welcoming I’ve had in any hotel. The moment I arrived I was greeted by someone saying enthusiastically: ‘You’re just in time for lunch!’ and was promptly whisked off to sit in the sun with a large G&T to look at the mouth-watering lunch menu.

To really make that experience perfect though, you have to be in a place which takes food very seriously, but which isn’t serious in the way it serves it: which makes The Pig near Bath such a perfect example of a friendly, foodie place. 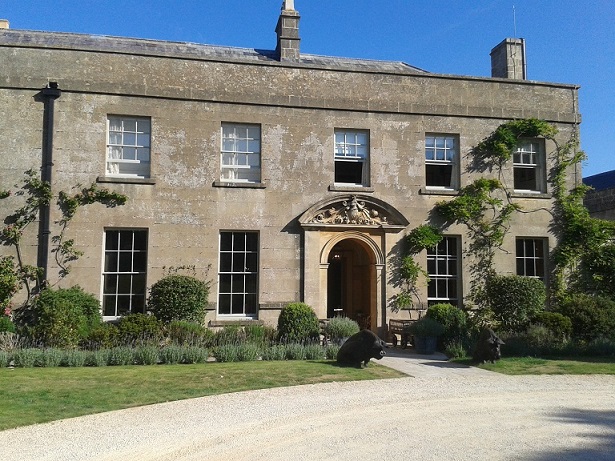 The Pig near Bath is in a 200-year old, Grade II listed property

The Pig hotels are rapidly becoming a phenomenon: people are starting to collect them, in the way that once you’ve been to one, you instantly want to go and bag the other ones too. Founded by Robin and Judy Hutson, the husband and wife team behind the very successful Hotel du Vin chain – Robin also previously worked at the lovely Chewton Glen, and also owns the acclaimed Lime Wood hotel in Hampshire – there are now eight Pigs in the group.

There’s the original Pig in Brockenhurst, the New Forest, opened in 2011; the Pig in the Wall (Southampton), the Pig on the Beach, in Studland, Dorset, and the Pig near Bath, which was where I was having my first Pig experience. There’s also the a whole little of new Pig hotels: the Pig at Combe, near Honiton in Devon – and the group (which is co-owned by Jim Ratcliffe, the billionaire chief executive of Ineos chemical company) has spent £30 million on a further three Pigs: the Pig at Bridge Place, near Canterbury in Kent, the Pig at Harlyn bay in Cornwall and recently opened, the Pig in the South Downs, just outside Arundel in West Sussex. 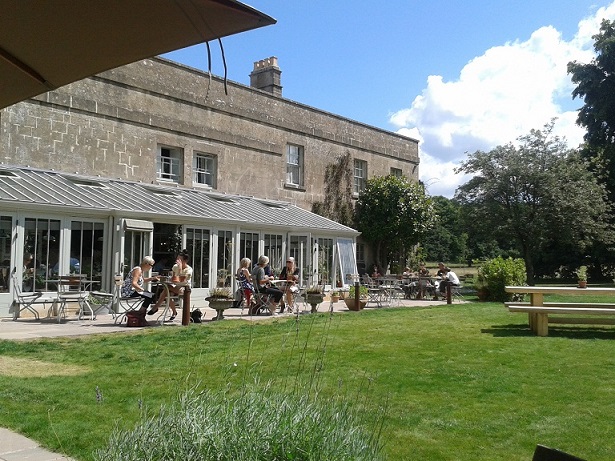 The house is surrounded by beautiful grounds containing the kitchen garden, potting shed treatment room, greenhouses and even a deer herd

Arriving at The Pig near Bath

The Pig near Bath is nine miles outside the spa town, in the 200-year old, Grade II-listed Hunstrete Hall. It is hard to write about the Pig without sounding too fulsome, but the Hutsons have succeeded into creating a lovely, relaxing, informal and cosy atmosphere which made you instantly want to move in for at least a month. 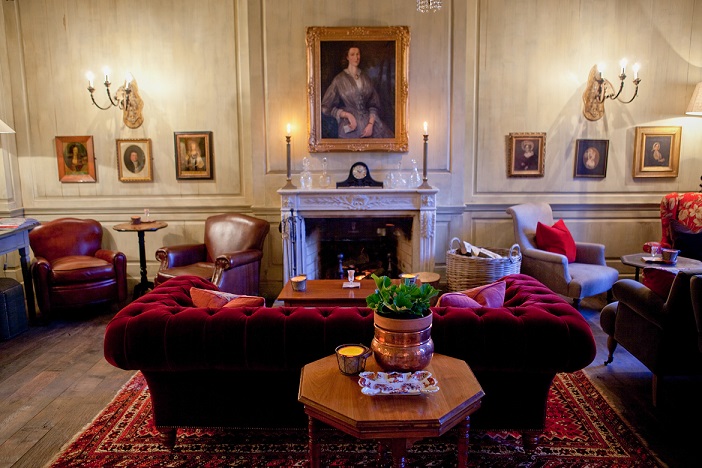 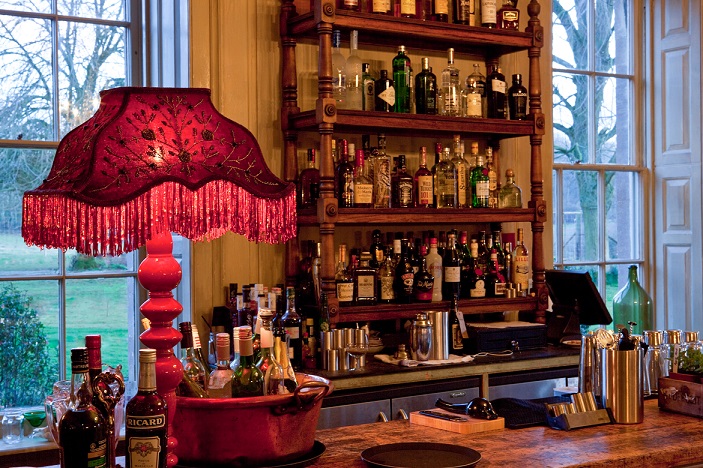 The well-stocked bar – perfect for a rainy day

From the outside it resembles those houses featured in Jane Austen adaptations – which are supposed to show that someone has fallen on hard times but still have enough room for an extended family, visitors and all their servants – and on the inside it is all ‘shabby-chic’, with unvarnished floorboards, squashy sofas, roaring fires and cosy corners in which to while away the hours with a book or a glass of homemade blackberry gin. 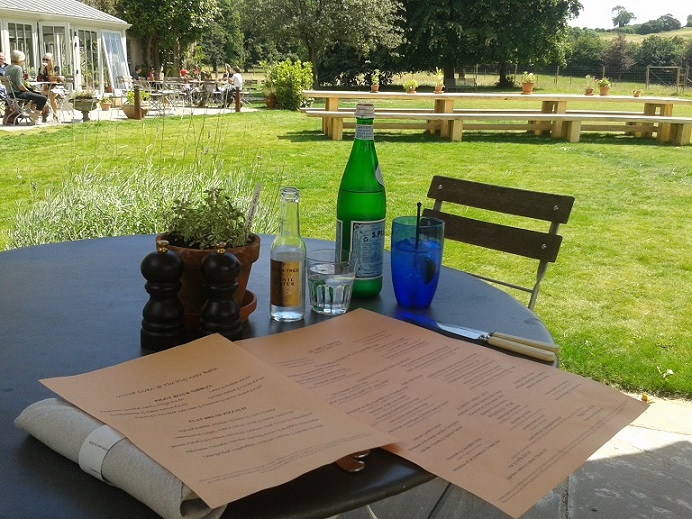 Enjoying an al fresco lunch outside at the Pig near Bath

Eating at The Pig near Bath

As it was a sunny day I had lunch outside, but there is also a light and airy conservatory (the Pig calls it an ‘authentic Victorian greenhouse’) so you can appreciate the beautiful grounds without getting frostbite. The menu was beautifully illustrated with a local map showing where the ingredients came from, and of course many of them came from the Pig’s own kitchen garden just behind me. These gardens are a features of all the Pigs, with the company ethos being to grow as much as they can themselves, resulting in fresh, seasonal delights. 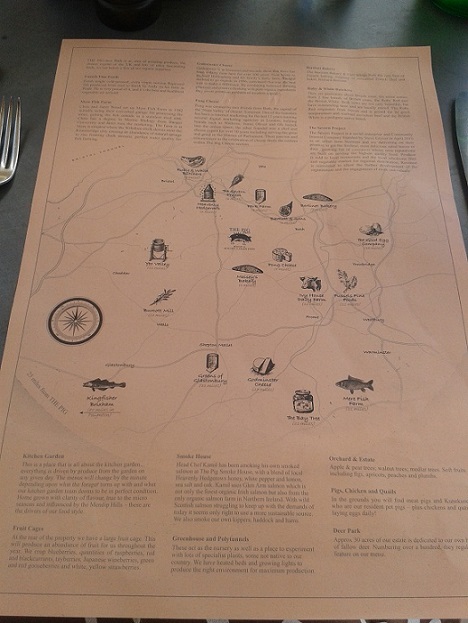 The menu showing where my lunch came from

The Pig near Bath menu

There were two menus for lunch, with the shorter one offering bar snacks such as radishes and wild garlic mayo, or scratchings and apple sauce, and a range of flat-bread pizzas for £9, including home-smoked salmon with red onion and marscapone.

The larger ’25-mile menu’ was divided into various sections entitled ‘Piggy bits’, ‘Starters and small plates’, ‘Literally picked this morning’, and ‘The Mendips’, along with sides and desserts. 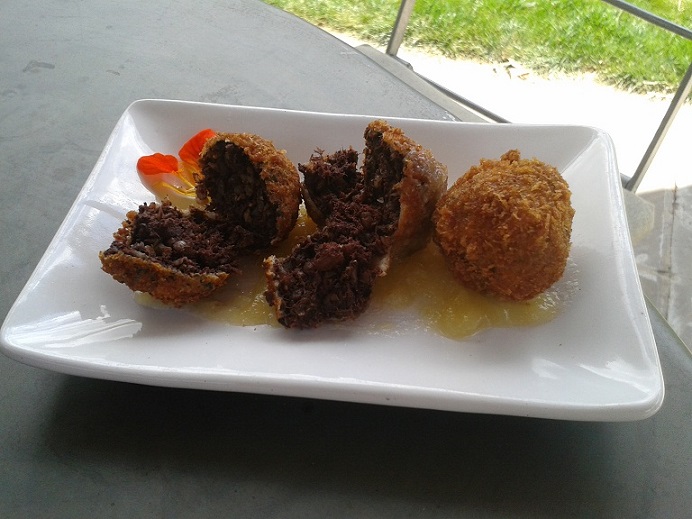 I couldn’t decide what to start with so rather greedily chose both the smoked salmon and the alarming-sounding ‘The Pig’s Black Pudding Balls’ which were delicious – very piggy but still light and tasty –  then the Brixham crab and runner bean risotto with garden flowers which was possibly the tastiest risotto I have ever had. 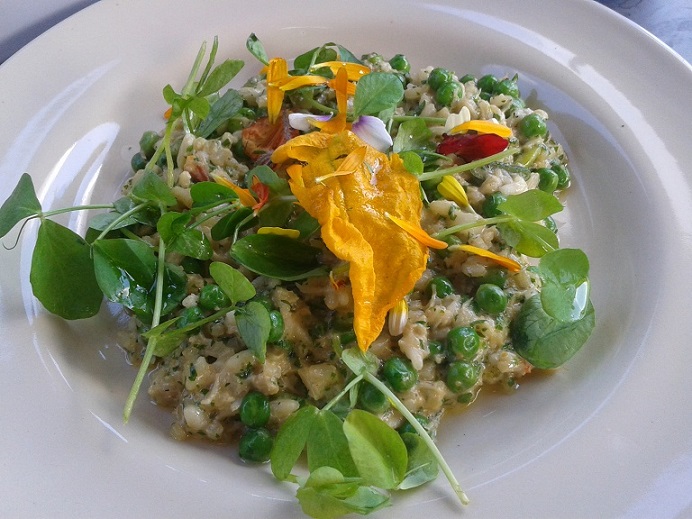 Bedrooms at The Pig near Bath

To spend the afternoon in the sun eating, drinking and doing very little else was a real treat and it was a good few hours later before I actually relinquished my spot in the sun to find my bedroom.

I was in the one of the outdoor ‘Hideaways’, just next to the main house, which was like having my very own cottage for the night. It had a four-poster bed, wood-burning stove, free-standing bath and little terrace overlooking the gardens, beyond which was a herd of dappled deer looking as if they’d just arrived from a Disney set. 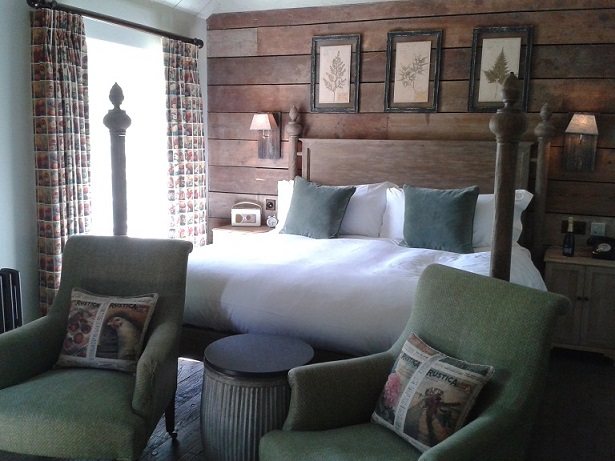 My very own cottage ‘Hideaway’

Reading material for the night…

For people who want to do more than just sit around dreaming of living somewhere like here forever, there are various activities on offer: a massage in a former potting shed, a game of billiards, working your way through the well-stocked bar… and there are also wellies to borrow when nothing but a plodge in the countryside will do.

However I was content to sit and read on my sunny terrace for a while before having a snooze – I was really working hard that day – and then emerged to have a quick tour of the property with the hotel manager Tom. 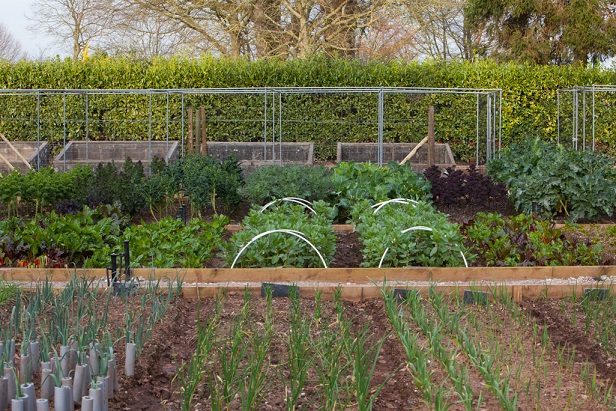 The Pigs describe themselves as ‘restaurants with rooms’, with the kitchen garden at the core

We’d seen the kitchen gardens, the smokehouse, the greenhouses and the wild flower meadow when we discovered that due to an unlatched gate, the chickens were enjoying some unexpected freedom. Thankfully Robin Hutson himself turned up at this point so while Tom rounded up the feathered escapees Robin and I enjoyed a pre-dinner G&T in the garden before being joined for dinner by Judy and their son Ollie who runs the all-important garden.

Dinner at The Pig near Bath

The evening meal was just as wonderful as lunch, with crispy pig’s ears (well, when in Rome…) followed by oven-roasted rump of Withywood farm lamb and then an epic caramelised rice pudding with ‘heavenly hedgerow’ jam. I’ve no idea what ‘heavenly hedgerow’ is but the adjective was spot on – it was impossible not to scoff the lot and just vow not to eat for a month or so. 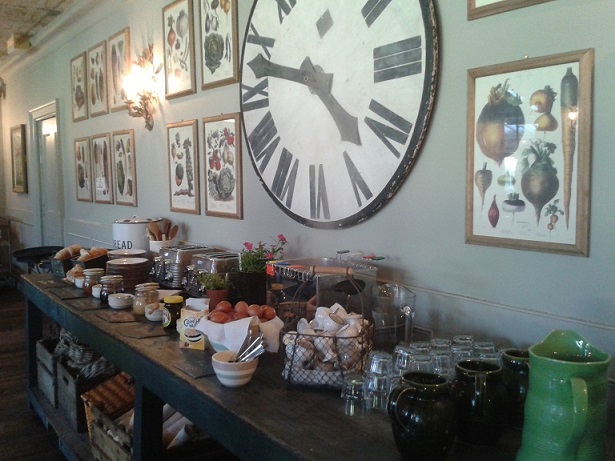 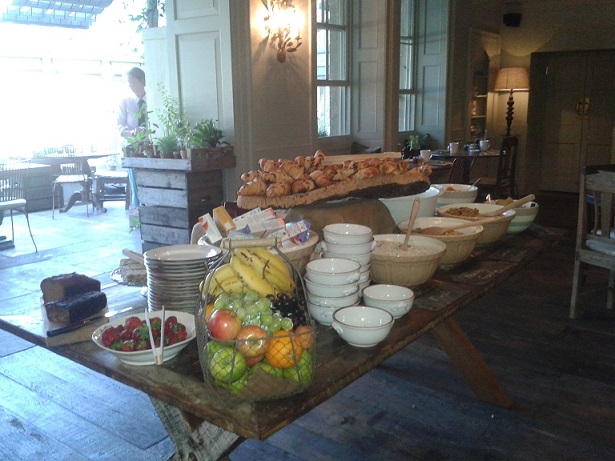 The Pigs describe themselves as ‘a restaurant with rooms’, with the kitchen garden at the core

Breakfast at The Pig near Bath

Obviously in the morning such resolutions went out of the window – the Victorian greenhouse was sumptously stocked with everything you could want to start the day and I had coffee and scrambled eggs in the sunshine before very reluctantly heading back to London. Judging by the reviews and the number of people happy to make the trip from Bath to eat at the Pig, plus those overnight guests like myself who came from further afield, the Hutsons have once again hit upon a winning formula.

Visit The Pig near Bath on TripAdvisor

Editor’s note: This review first appeared in January 2016 but has been totally revised and updated

If you liked this review of The Pig near Bath, you’ll love these reviews of great hotels near Bath: Lucknam Park: a Palladian mansion with superb gardens, spa and restaurant; A wine-lovers delight at The Vineyard at Newbury hotel and spa; Greenway hotel and spa, Cheltenham: a luxury hotel with the fizz factor;