Home / Hotel reviews / The Bull at Sonning: a perfect example of a great British pub

If you were to try and describe a classically British pub, then you’d probably come up with something like Fuller’s pub The Bull Inn, Sonning, in Berkshire. It’s got roaring fires and low beams, it is more than 600 years old, does great food and drink and is at the heart of the village. 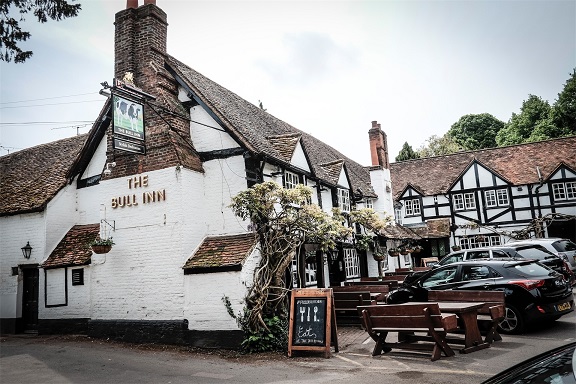 The Bull at Sonning pub is full of charm and character

History of the Bull at Sonning

Writer Jerome K Jerome wrote of the pub in his book Three Men in a Boat, saying: ‘If you stop at Sonning, put up at the Bull behind the church. It is a veritable picture of an old country inn, with green, square courtyard in front, where, on seats beneath the trees, the old men group of an evening to drink their ale and gossip over village politics; with low, quaint rooms and latticed windows, and awkward stairs and winding passages.’ 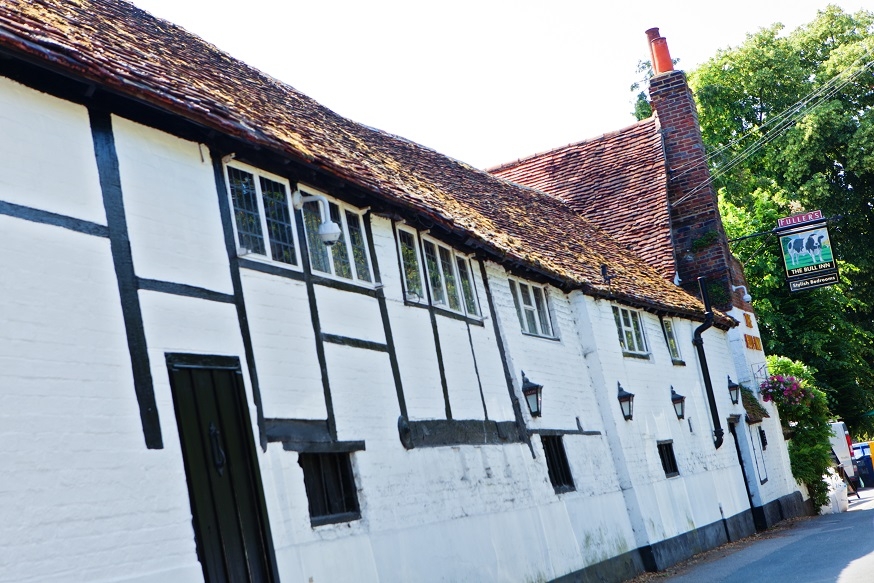 It has barely changed in the hundred or so years since those words were written, although the green, square courtyard in front is now more concrete than green. However there are still tables outside giving a nice view of the church next door (which owns the pub and leases it to Fullers brewery). There’s also a handy hatch to the bar from outside through which you can order drinks, and nice touches such as blankets in case the weather is also classically British.

Book The Bull at Sonning at Booking.com

Visit The Bull at Sonning on Tripadvisor 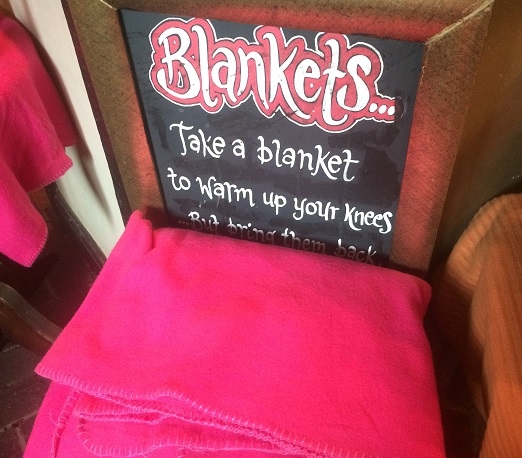 Celebrity fans of The Bull at Sonning

The Bull even has the approval of Hollywood superstar George Clooney, who presumably can drink anywhere he likes but chooses to pop into The Bull whenever he’s back at his English home, which is just across the river. His very own brand of tequila, Casamigos, which George set up with his chum Randy Gerber (aka Mr Cindy Crawford) before selling for $1 billion is sold here and Mr Clooney has not only brought chums such as Bill Murray and Matt Damon here but has praised The Bull on various US talkshows, calling it ‘a great pub.’ 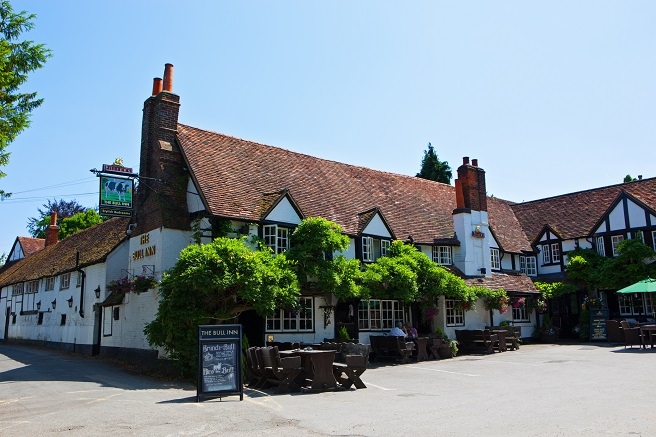 The pub is a Fuller’s pub but stocks a variety of beers, lagers and wine – plus George Clooney’s own brand of tequila, Casamigos

Popular with walkers of the Thames Path

Landlady Christine, who has run the pub for Fuller’s brewery for the last 21 years, remains discreet about her famous customers and instead concentrates of the difficult task of keeping both locals and visitors happy – it’s a popular pub with walkers and cyclists, being just a footpath away from the Thames path which runs between London and Oxford. She makes sure there’s always a quiet corner for Sonning residents to have a relaxing pint even when the pub puts on one of its many popular evening: tribute acts, jazz evenings and even a popular July 4th barbeque (which should please Mr Clooney no end).

If you love staying in traditional pubs with rooms then don’t miss these great reviews:

Inside the Bull at Sonning

The inside is warm and cosy, with wooden floors, a well-stocked bar, pictures on the walls (but not too cluttered) and a separate front bar, main bar and back dining room. It also has seven rooms upstairs if you fancy making a night of it. 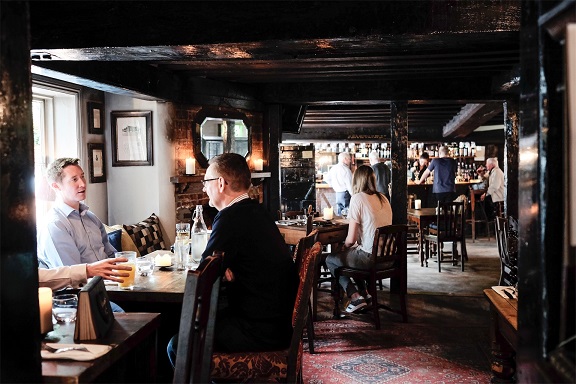 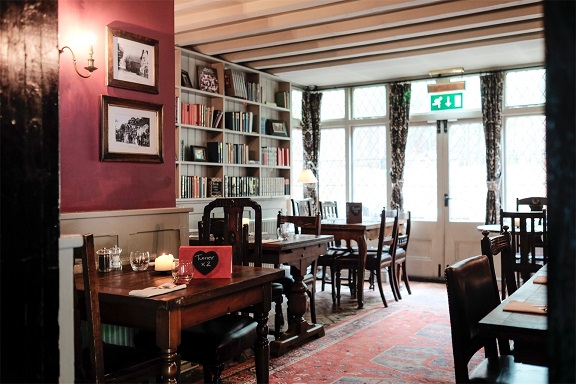 The dining room at the rear of the pub is a cosy room, ideal for a long lunch

I’d found The Bull on the website StayinaPub.co.uk which – as you’d expect, is a website promoting staying in pubs – and had never even been to Sonning before. It is a beautiful, tiny village, consisting of barely half a dozen streets lined with houses that looked like they’d come straight from medieval England.

Before settling in to the Bull for the rest of the day and night, I first enjoyed a very pleasant walk along the Thames path (which is less than a minute from the pub) up to Sonning Lock, past George’s house – hello George! (sadly George didn’t seem at home) and had a look at the Mill Theatre, an 18th century former mill, now renovated and turned into a pleasant-looking bar, restaurant and theatre.

I completed the loop walking back up through the village, and then sat outside The Bull pub in the sunshine with a pint of Butcombe’s IPA and the Sunday papers. Bliss. 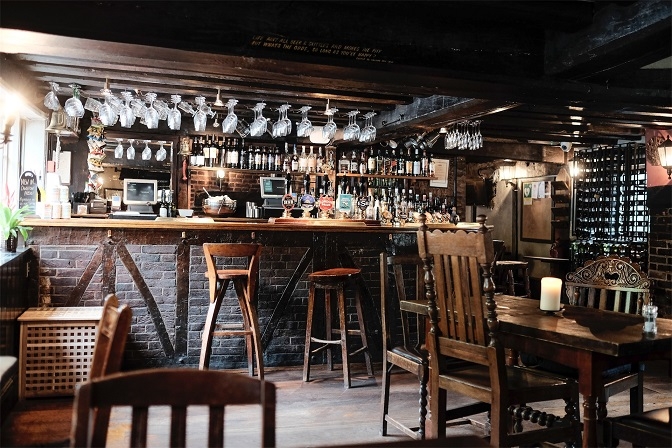 Bedrooms at the Bull at Sonning

My room, number 5 at the top of a rather steep flight of stairs – that’s a 600 year old pub for you – was surprisingly large, with a king-sized bed, smart bathroom with walk-in shower, a desk and even a sofa. In spite of the sunshine it was rather gloomy – some lighter decoration and taking the table-top mirror away from the window might help – and it had a slightly utilitarian feel thanks to the ironing board propped up next to the bed. 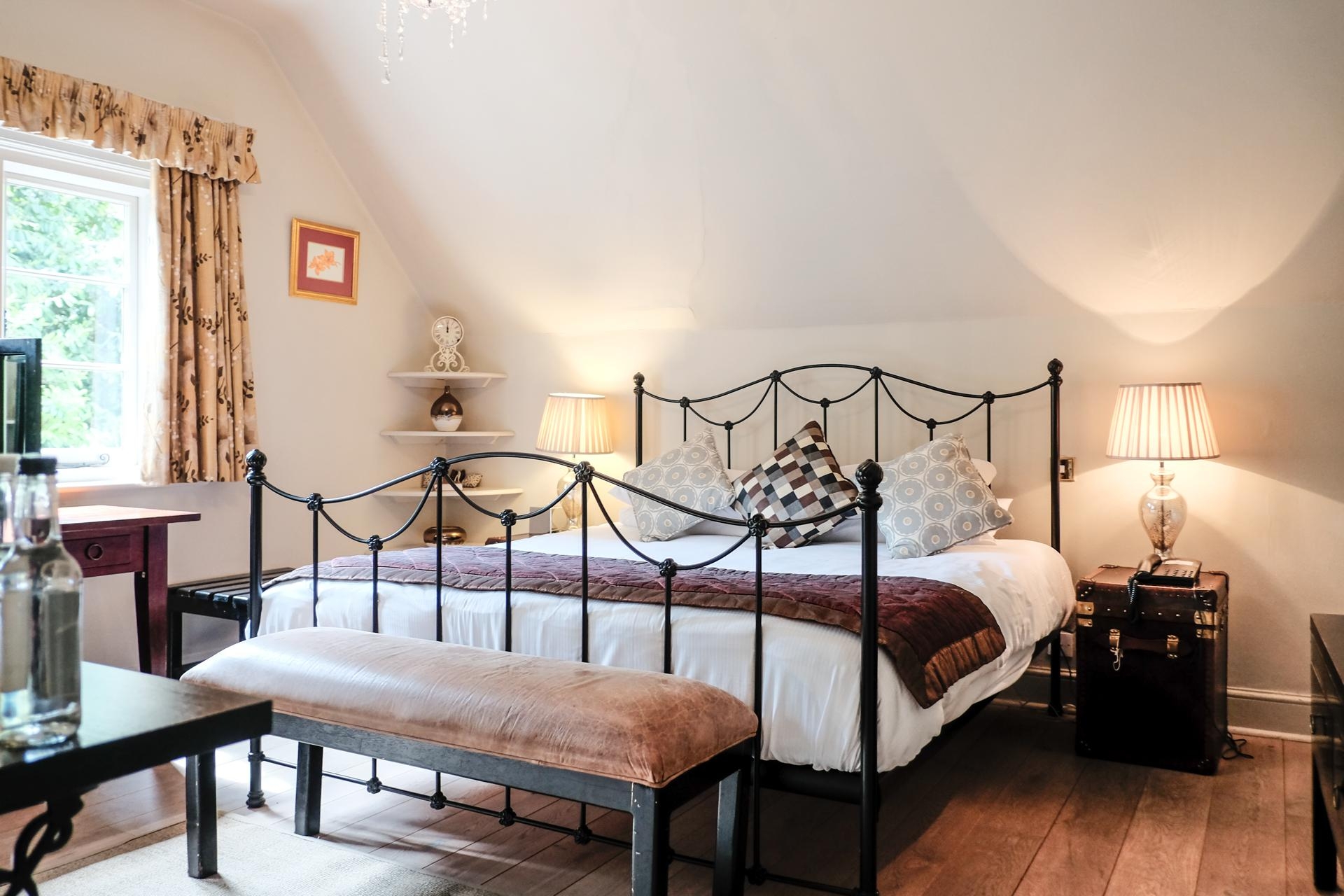 There are seven rooms upstairs at The Bull at Sonning

However it had full tea and coffee-making facilities and when I checked in I was given a pot of fresh milk to take up which was a nice and welcoming touch. There were only four channels available on my TV which was surprising but the free wi-fi was fast.

Dinner at the Bull at Sonning

Dinner downstairs was a cut above your standard pub fare, with a hand-written page of daily specials, including roast butternut squash soup, confit pig’s cheek, ossobucco and Brixham plaice while there was also a printed menu with yet more options, such as teriyaki duck breast, sirloin steak and pan-fried yellow fin tuna. 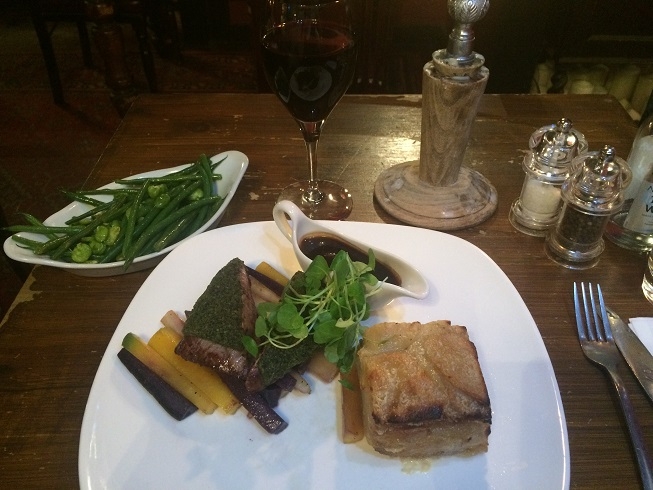 I dived straight into the main course of herb-crusted lamb loin, which was so delicious I was immediately trying to work out how I could replicate this at home, and it came with a lovely rich red wine jus and dauphinoise potatoes. 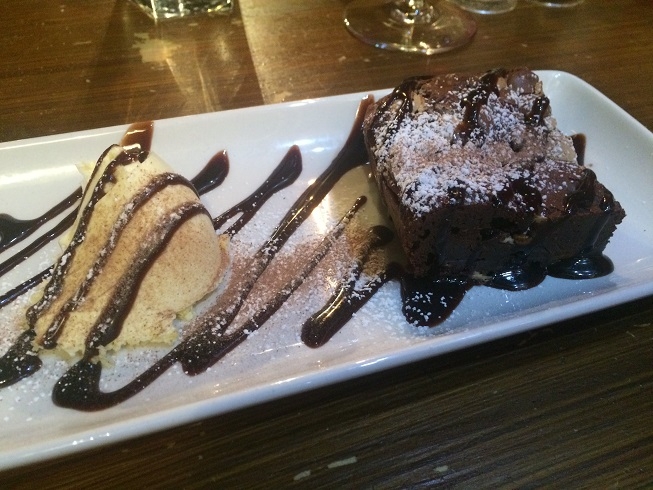 In spite of the large portion I still managed to find room for a dessert of a chocolate brownie with hot chocolate sauce and clotted cream, and then rolled on upstairs for a 10 hours of dreamless sleep.

Breakfast at the Bull at Sonning

Breakfast the next day was equally good – piping hot coffee, Eggs Benedict and the morning paper. Reluctant to leave, I then spent a very pleasant morning working on my laptop in the downstairs bar and then had a delicious tea-and-hop-smoked leek and sweetcorn chowder for lunch before heading on my way. Now I know it’s there, I will most certainly be back to the Bull at Sonning before long. 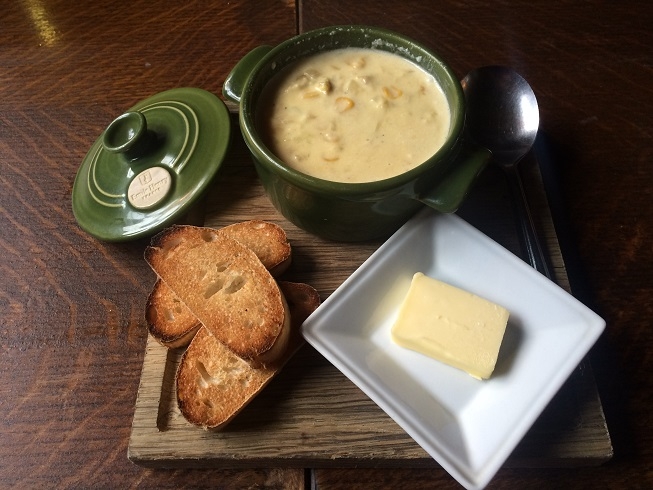 Leek and sweetcorn chowder was ideal for lunch

Hotel information and to book The Bull Inn

Standard doubles room only from £95 and superior doubles from £122.

Book The Bull Inn at Booking.com

Visit The Bull at Sonning on Tripadvisor

Editors note: this review first appeared in April 2016 but has been revised and updated for accuracy and relevance

Here are some more great pubs with rooms which you’ll love: Exploring the Cotswolds with a stay at The Bear of Rodborough; A night at 600-year old coaching inn Bel and the Dragon Cookham; Good taste in every sense at The Swan, Southwold; The Crown and Castle, Orford: a spot of Suffolk food heaven