‘What did you do for your birthday?’ I was asked the other day.

‘Well,’ I said, trying to sound casual, ‘after a champagne breakfast in my luxury Caribbean condo, I went on a catamaran cruise along the coasts, snorkelled among tropical fish, trekked through a rainforest underneath a volcano and then ended up riding a horse along the beach at sunset.’

There was a pause. ‘And I drank a lot of rum punch,’ I added, just in case they thought it sounded all too much like hard work.

My holiday on the island of Nevis 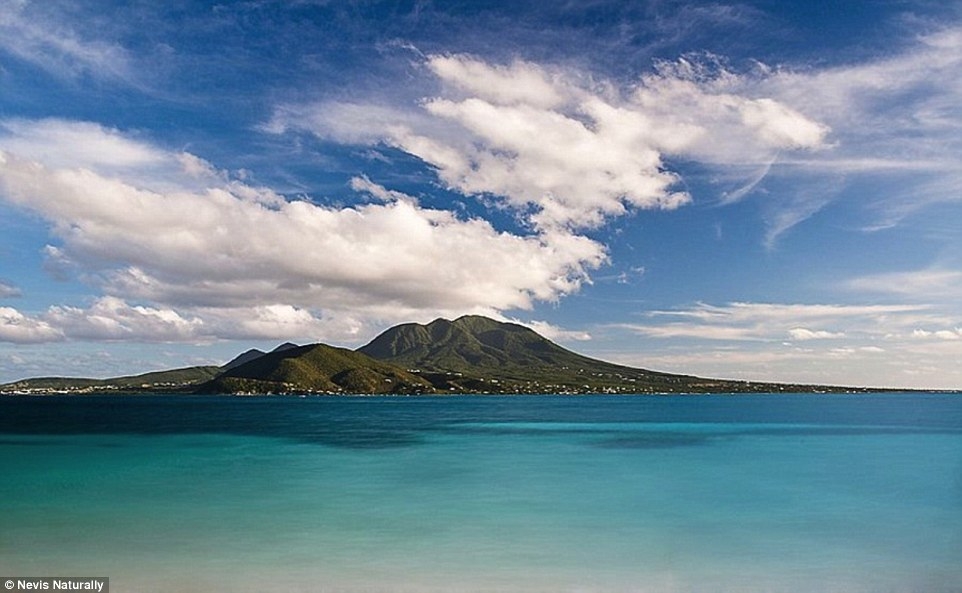 As far as bragging rights go, spending your birthday on the spectacular island of Nevis, with its stunning turquoise waters and lush green rain forests, sets the bar pretty high.

Whether you are marking a special occasion or not, there a dozens of beautiful, sandy beaches to lounge on if you fancy doing very little, while there is everything from kayaking, horse-riding, catamaran cruises, hiking and snorkelling if you wanted to do something more active. 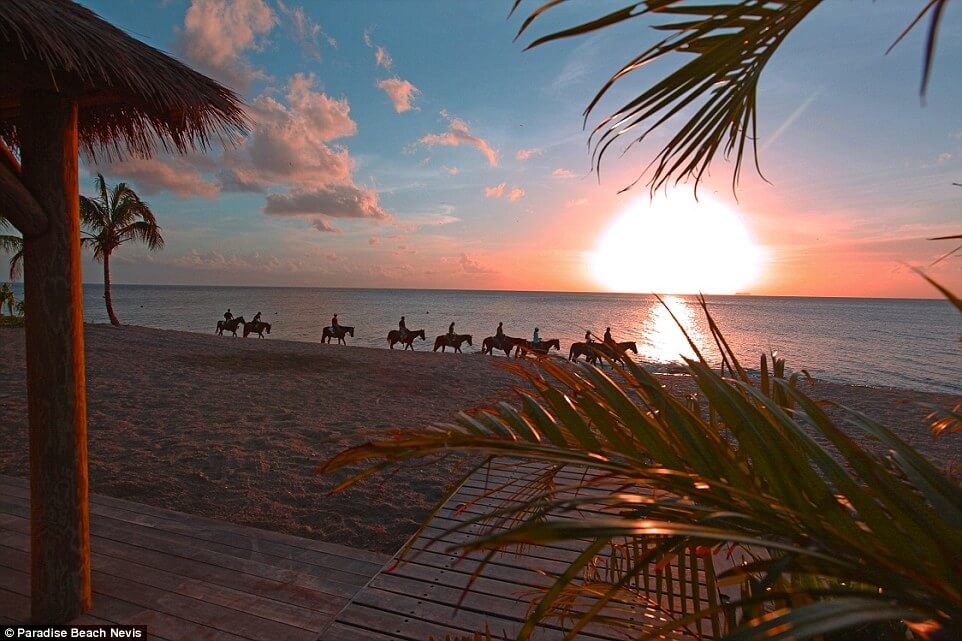 I enjoyed a sunset horse ride along the beach at Nevis

Nevis, a tiny atoll in the Caribbean twinned with St Kitts, came to the British public’s attention when Princess Diana stayed here 25 years ago with the young Princes William and Harry. To say that little seems to have changed in the meantime is a compliment, rather than a criticism of the tiny Caribbean island. Diana flew to Nevis (pronounced Nee-vis) for peace and solitude, and the 36-square mile island certainly still has that in abundance. 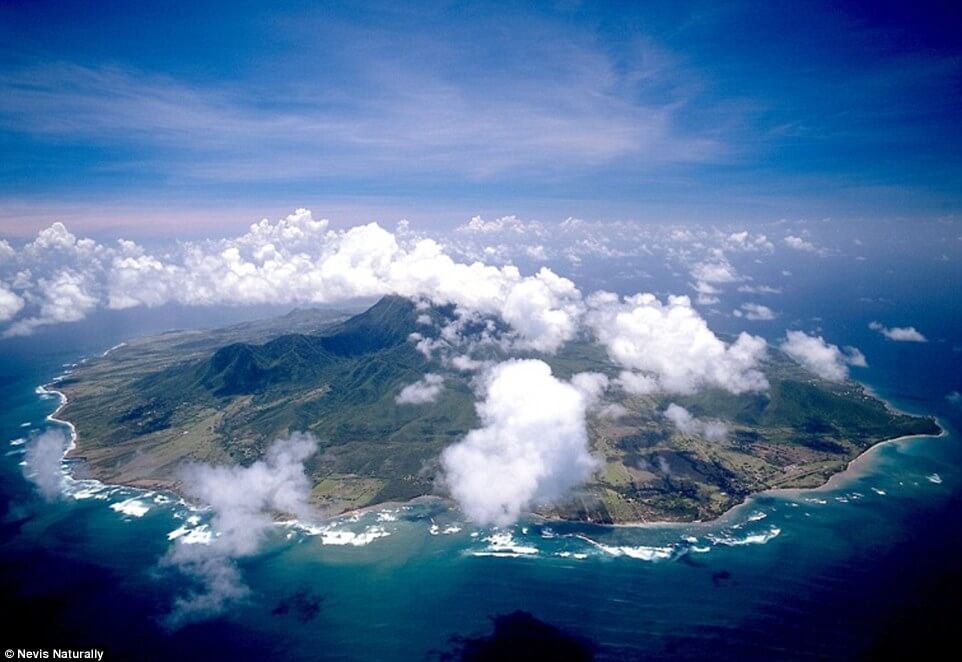 Unlike St Kitt’s, which is just a couple of miles away across the water (there is an annual swim between the two islands), or its larger Caribbean neighbours such as Antigua and St Lucia, Nevis is still untouched by tourism on a large scale.

Few cruise ships and no long-haul flights stop here which has helped the island keep its charm and with just 12,000 inhabitants it certainly isn’t crowded – you will have the beaches all to yourself. 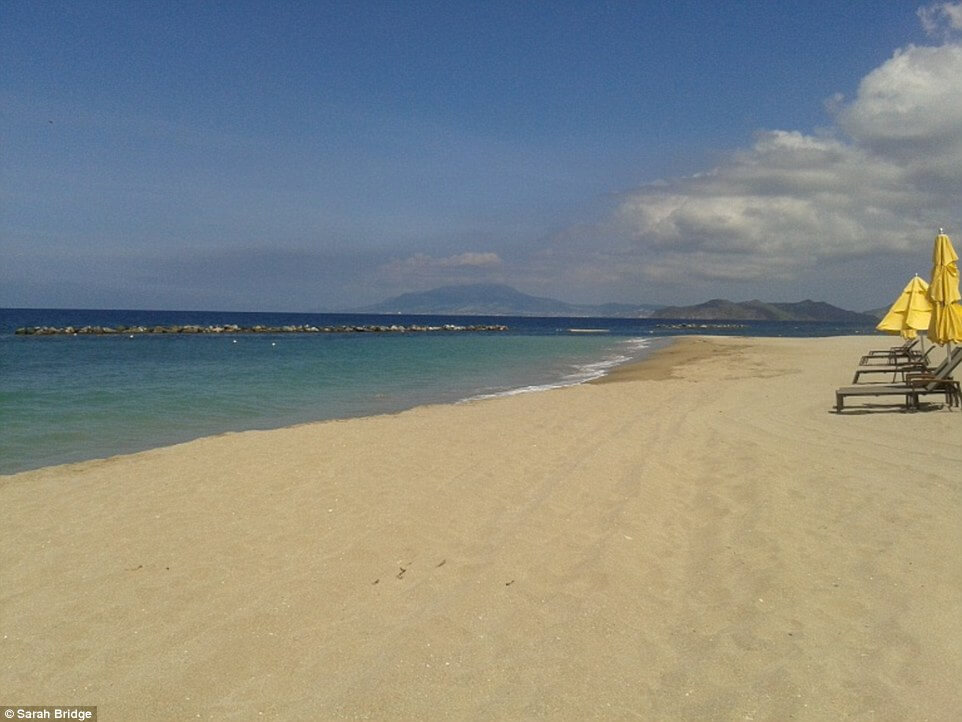 Nevis has some beautiful sandy beaches and, without mass tourism, you won’t find it hard to get a spot

With just one main road hugging the coastline (driving is on the left, as befits the oldest British colony in the Caribbean – St Kitts and Nevis became a fully-independent country in 1983) it doesn’t take long to drive round the lush, green island which is dotted with coconut palms, 19th century churches and disused sugar cane mills, the legacy of the once-massive industry here. 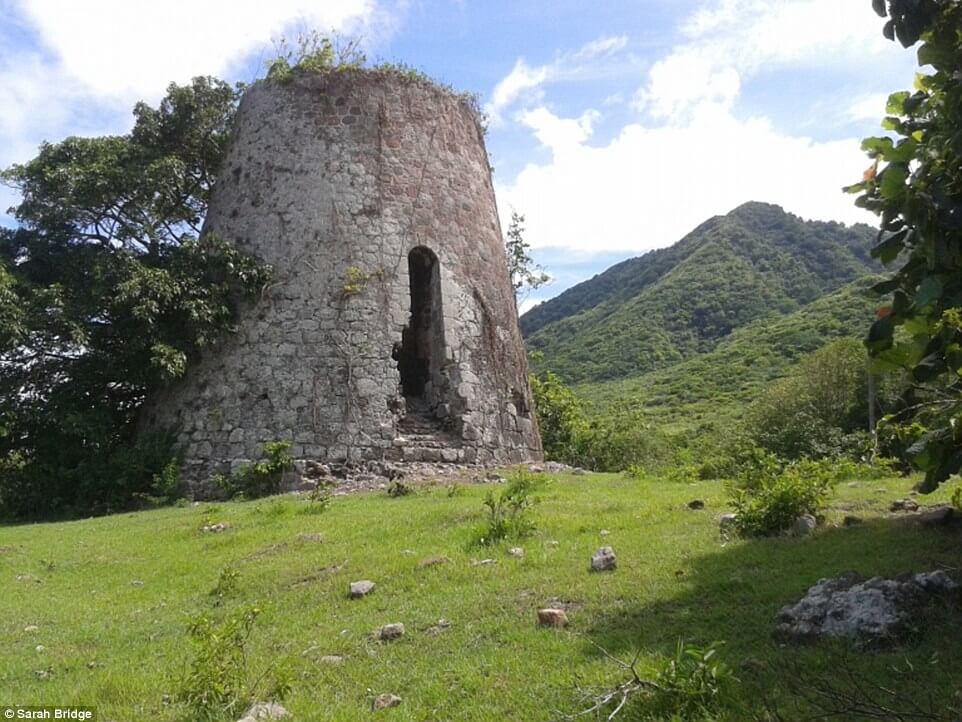 The lush green countryside is dotted with the ruins of sugar cane mills, a legacy from Nevis’ industrial and colonial past

The capital, Charlestown, is tiny both in population (just 1,500 people) and size: wandering through its narrow streets and the ferry port with its customs house and tiny central square feels like going back in time to a different era.

The local juice bar serves its drinks in a leafy garden where clucking chickens wander around, and even the journey to Nevis itself – on a tiny six-seater propeller plane from Antigua (you can also transfer from St Kitts by plane or boat) – felt as if I was really travelling way off the beaten track. 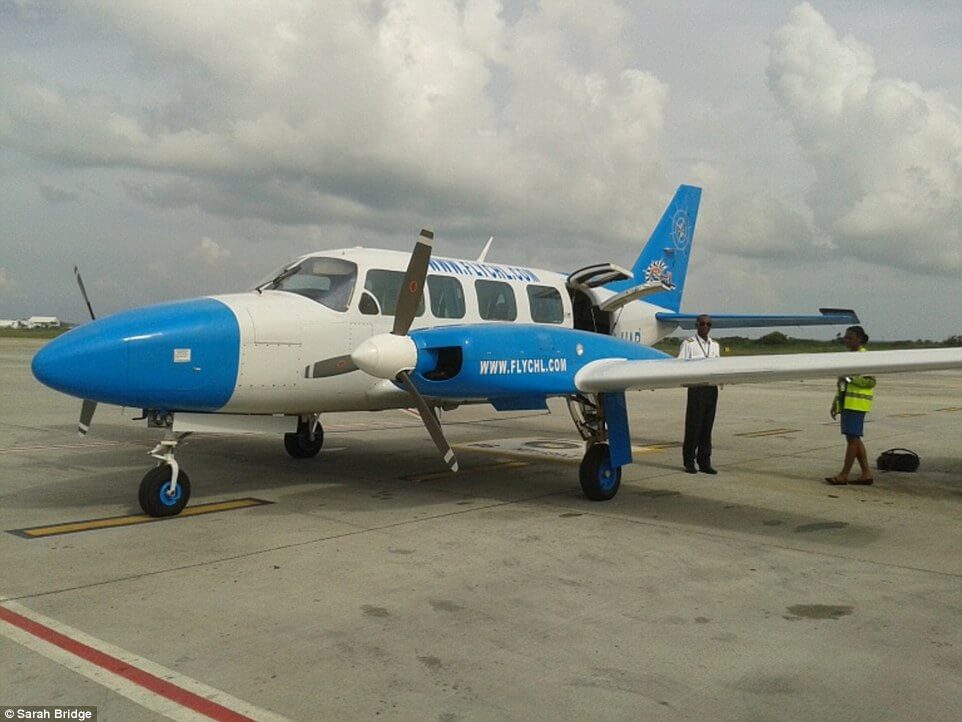 My transport to the island: a tiny six-seater plane

There are plenty of walking trails in the interior of the island in the shadow of the brooding volcano Nevis Peak. Our guide was able not only to take me through dense rainforest to some beautiful waterfalls but to point out every plant which had a practical use, from curing sore throats to producing the best bark for burning, or boat-building – and we saw a fair few monkeys too which roam the island and can be heard chattering from the trees.

For such a small island it boasts some impressive former inhabitants: American Founding Father Alexander Hamilton was born here, while Horatio Nelson met and married his wife, Francis Nisbet, on Nevis, meeting her every time he came ashore to get water from a nearby spring for his fleet.

Staying at the Paradis Beach resort on Nevis

Thankfully while Nevis doesn’t boast endless high-rise holiday apartment blocks or global hotel brands, it doesn’t mean visitors have to skimp on the essentials. While Princess Diana stayed at the Montpelier Plantation, I stayed just down the road at the newly built and aptly-named Paradise Beach resort. 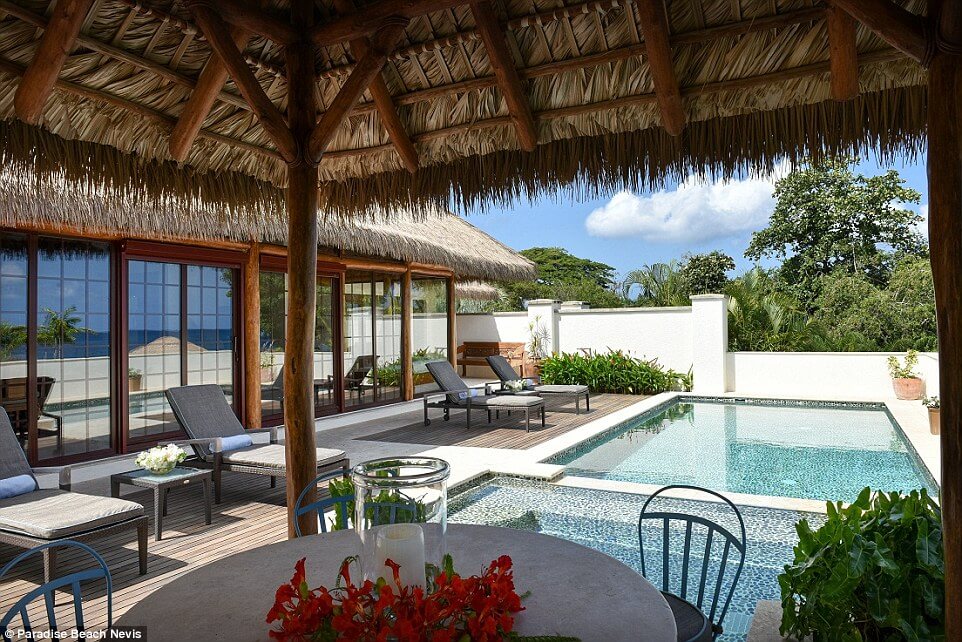 The villas at Paradise Beach Nevis are exquisite, with loungers, pools and shade if you need to escape the midday sun

My four-bedroom, four-bathroom villa not only had its own swimming pool, outdoor shower, fully-equipped kitchen and wi-fi, but was just a few steps from the beach, and most importantly, the beach bar.

Here rum punches were served pretty much constantly, with even a passing ship stopping to refresh its passengers, but I indulged in some healthier pursuits on the beach too, including jet-lag busting early-morning yoga, stand-up paddle-boarding and a luxurious alfresco massage, made even more relaxing by the sound of the nearby waves. 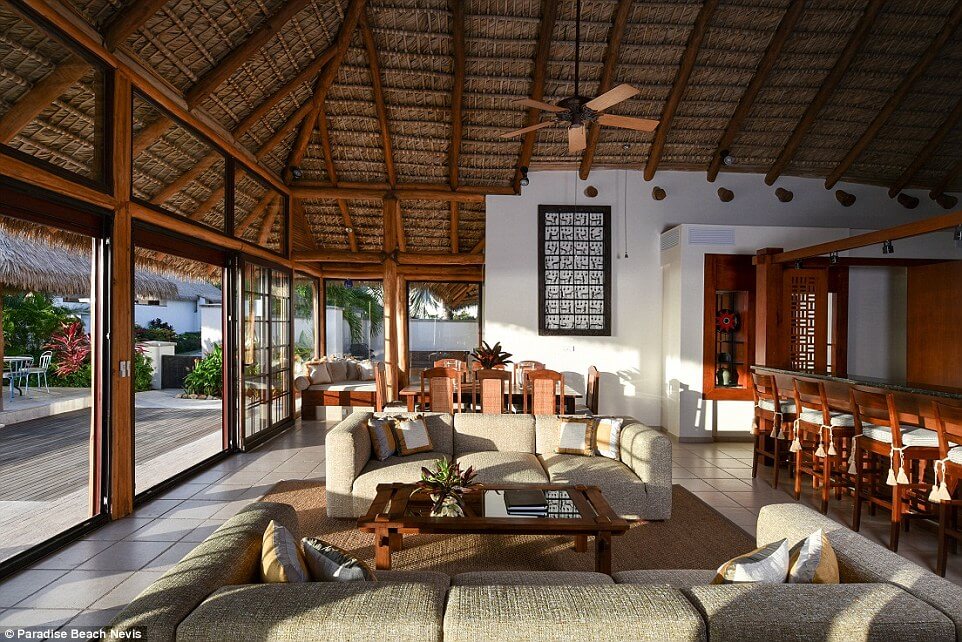 My four-bedroom, four-bathroom villa was huge, with a fully-equipped kitchen and lounge

While Paradise Villas provides private catering for each villa, there are also enough good restaurants on Nevis to keep foodies happy: I had a particularly good meal at Banana’s, high up above Charlestown up a pot-holed road – where I sampled local delicacies such as Nevisian Goat Water (a hearty, meaty stew) and Johnny Cakes, a crispy, coconut dumpling. 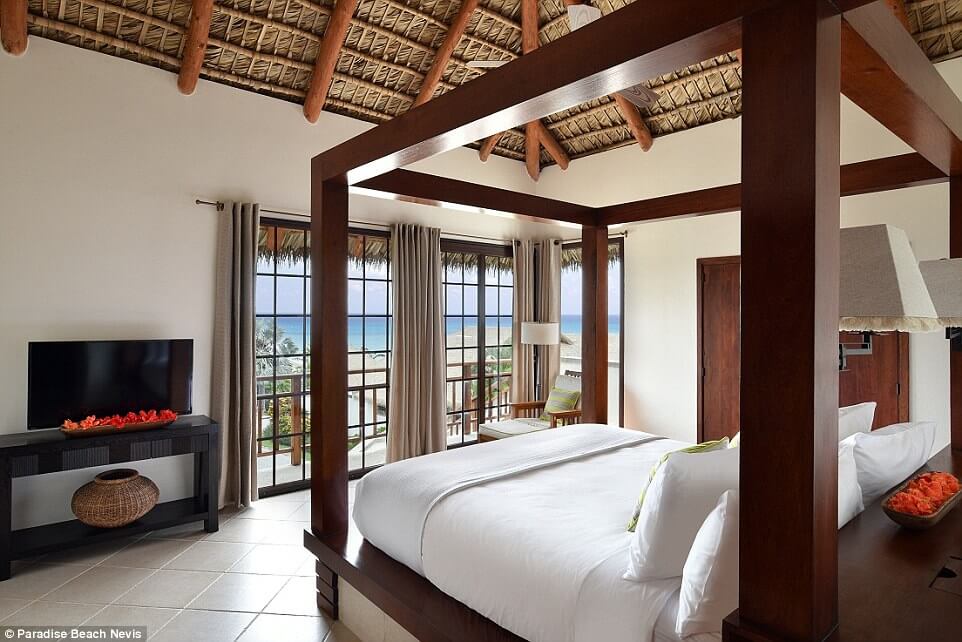 My luxury bedroom at Paradise Villas was pretty smart

Just a short walk along the beach from Paradise Beach was Pinney’s Beach, with a cluster of bars and restaurants built out of wood and open on all sides to the elements. I had to sample a few of its famous (or infamous) Killer Bee’s cocktails at Sunshine’s Beach Bar (the recipe is secret, but I’m guessing rum was involved somewhere) and the world looked even better – if that was possible.

For those looking for more ‘bling’ and a rocking night-life, Nevis would be far too quiet, but as an island getaway it is ideal. And it certainly sets a high standard for my next birthday.

How to get to the Caribbean island of Nevis

I flew Virgin Atlantic from London to Antigua and then onto Nevis. British Airways also flies directly to Antigua.

[Editor’s note: This article was orginally published in MailOnline but has been fully updated for relevance and accuracy]