If a hotel is called a castle, then you want it to look seriously impressive, and Bovey Castle hotel Devon did not disappoint. Once we’d handed the car to the friendly and efficient team of valets who welcomed us on arrival, we walked through the hotel to be greeted by this sight when we looked back. 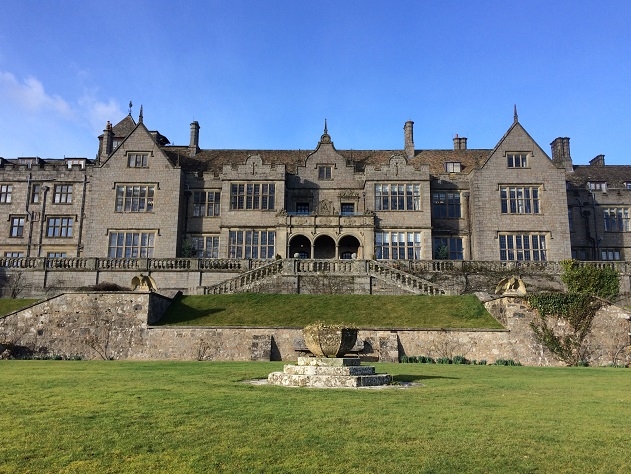 We walked through the hotel to find this view: Bovey Castle hotel looking splendid in the sunshine

My expectations of Bovey Castle (pronounced Buvvey) had been high from the start but I was pleasantly surprised to find during our stay that my expectations were met and then surpassed.

The hotel itself was as vast and imposing as I thought it might be, our huge, luxurious room was even nicer than I though it would be, but what I hadn’t expected was the sheer friendliness of the place.

The moment we arrived, a trio of valets clad in tweed plus-fours sprang into action to help us unload our luggage and admire the car ( I’d been lent a £150,000 Aston Martin DB11 for the trip). 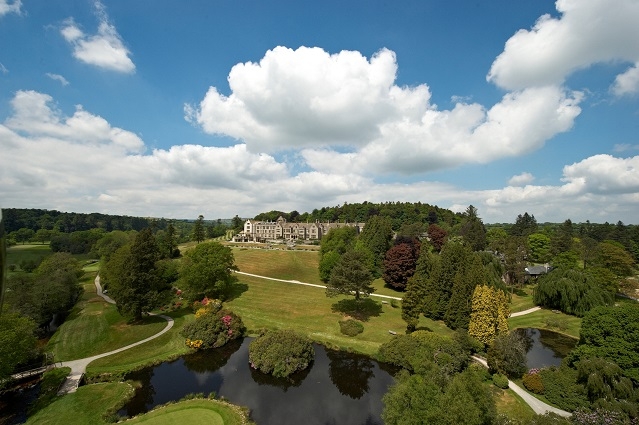 Some hotels as large as Bovey Castle (it has 60 bedrooms and suites, 22 self-contained cottages rooms and is set in 275 acres of rolling Dartmoor countryside) can often be rather impersonal, while historic country house hotels run the risk of being formidable, so Bovey Castle could easily be both soulless and intimidating. But everyone at Bovey Castle was so friendly it wasn’t long before we felt totally at ease and right at home.

While the weather was typically wintery during our stay (Bovey Castle in summertime would be an amazing sight) which ruled out tennis, croquet and golf for all but the most hardy, there was still a schedule of both free and chargeable activities, such as falconry displays, ‘meet the chickens’ for the children and gin and cider-making for the grown-ups. 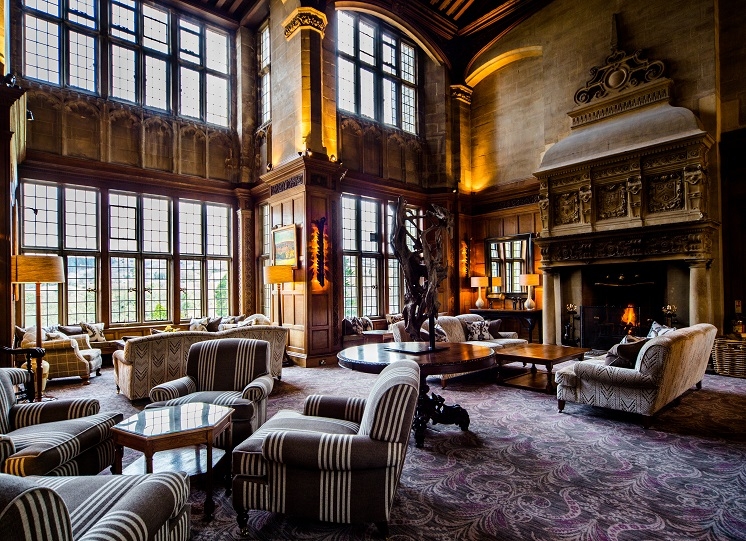 The interior of Bovey Castle is very grand but the hotel is anything but intimidating. It’s dog-friendly, family-friendly and feels very welcoming

We tried out archery and rifle-shooting (see below) and loved being out in the sprawling grounds which surrounded Bovey Castle. But first, it was time to check out the rooms….

We had been given a seriously luxurious suite for the night: number 50, which was so vast we could probably have had our archery lesson indoors.

There was a huge lounge with a walk-in closet, a vast bedroom, an equally large bath with freestanding tub and the whole suite was imbued with the air of luxury that only plush furnishings, epic views, a decanter of sloe gin and an ice bucket of Champagne can give. I could have happily spent the whole stay in our room. 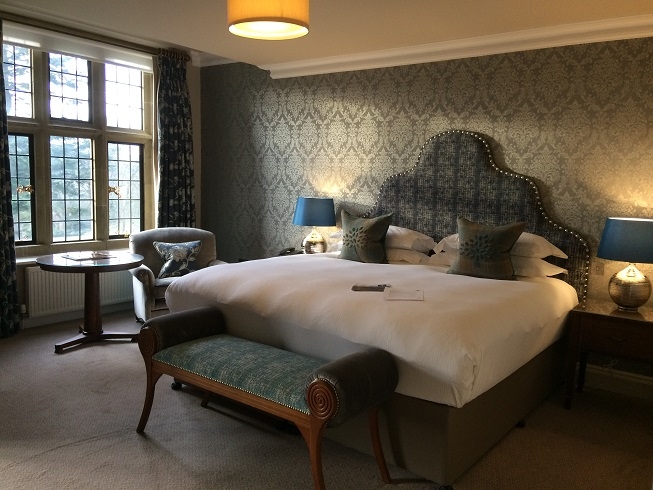 Our corner suite, room number 50 , was vast, with a huge bedroom, bathroom and separate lounge with a walk-in closet 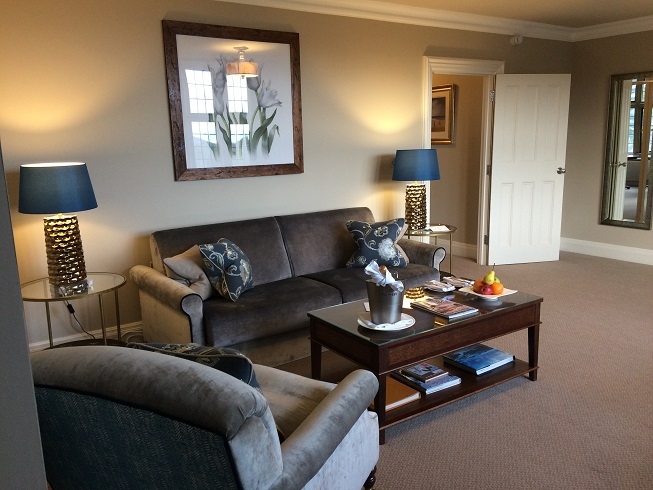 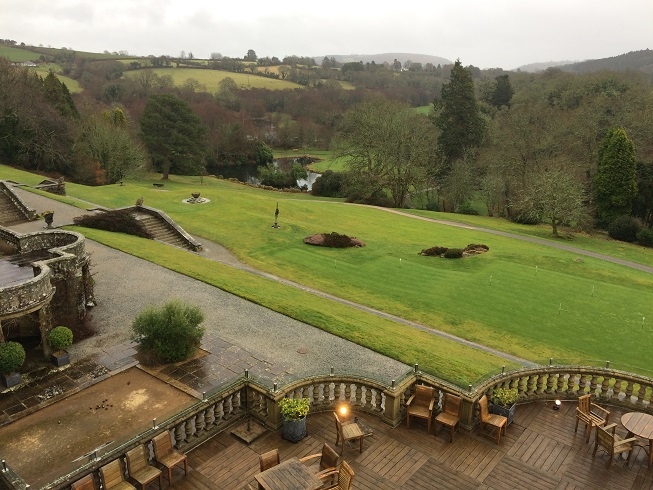 Once we could tear ourselves away from our room, we discovered that there is ample room to relax indoors at Bovey Castle hotel. As well as the bar and two restaurants there is a spa in the main hotel building with a swimming pool, sauna, steam room and jacuzzi, and there are spacious and grand rooms on the ground floor for afternoon tea, a cocktail or two or just a place to curl up with the Sunday papers or a good book (one room has a parrot in, which was a little incongruous). 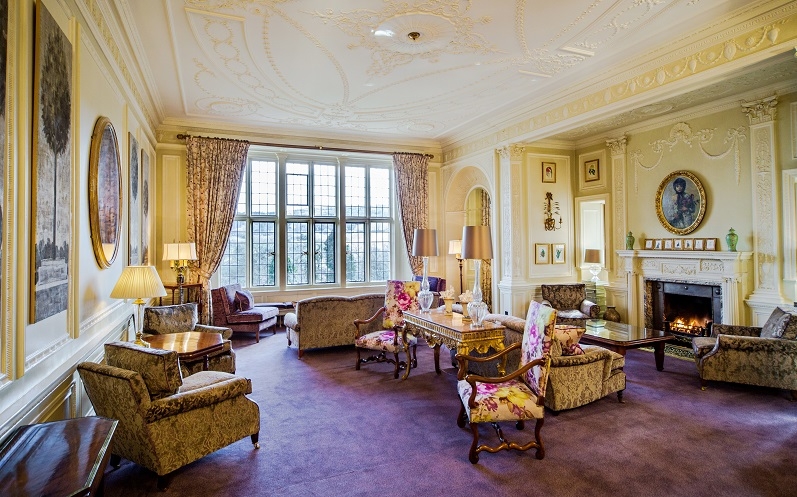 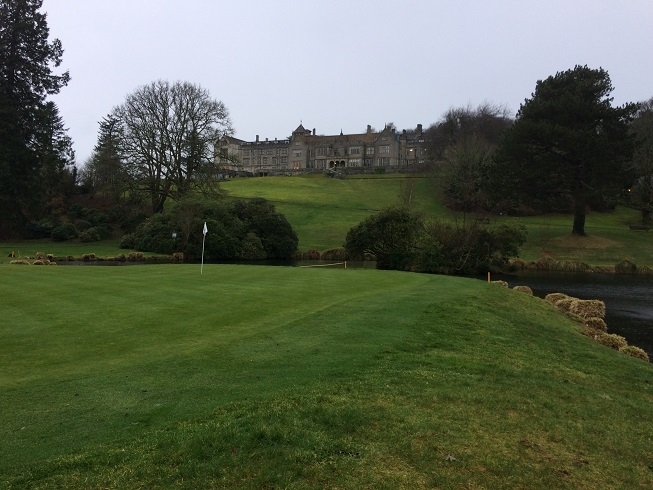 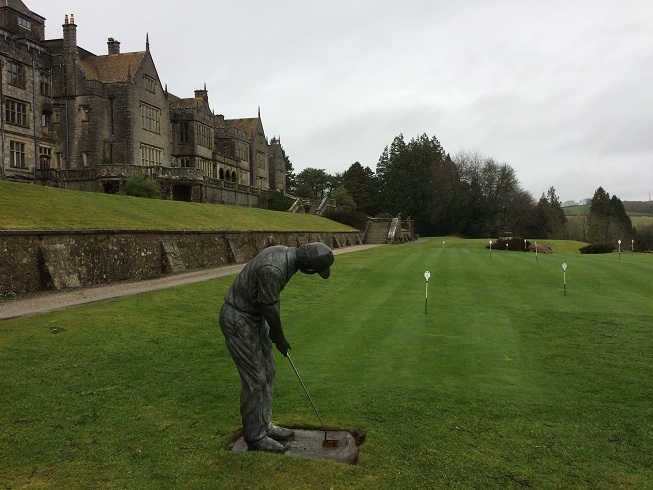 Bovey Castle is popular with golfers all year round 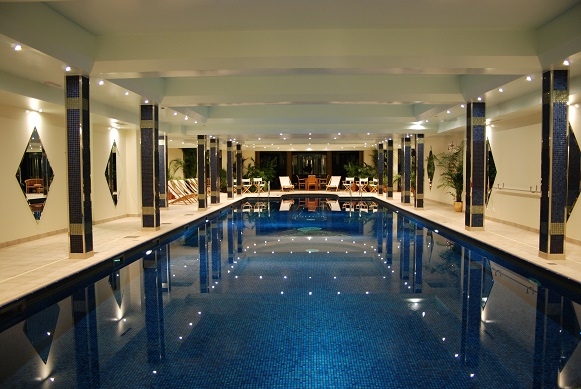 The hotel has a spa with treatment rooms, plus a pool (which is quite narrow but perfect for laps), gym, steam room and a sauna. 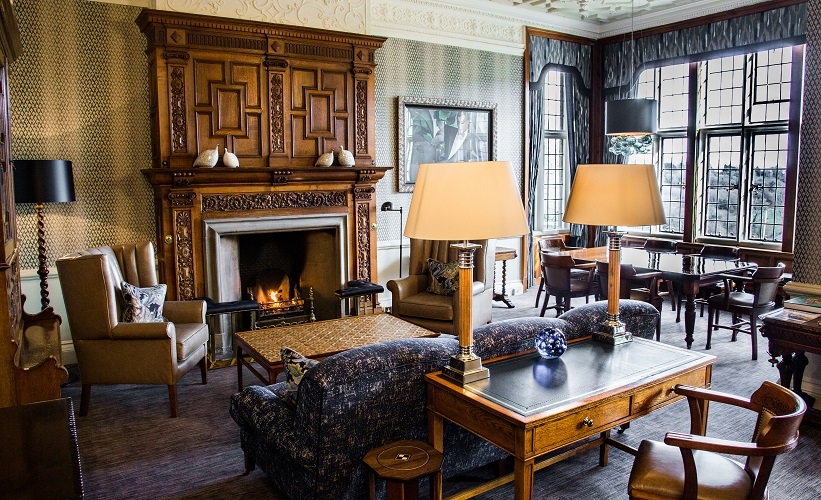 Getting fired up by archery at Bovey Castle hotel

It was soon time for our archery lesson. The patient and friendly Quentin took us through the basics of how to shoot safely and accurately, and now it was up to us to put it into practice.

I managed to hit the target more often than not and even fluked a shot to the gold centre of the target. Flushed with success, I moved onto rifle shooting. This was much harder, with the tin cans and hanging yellow bath ducks proving much more elusive targets, until my friend Lisa suddenly ‘got it’ and was firing away like a modern Annie Oakley. 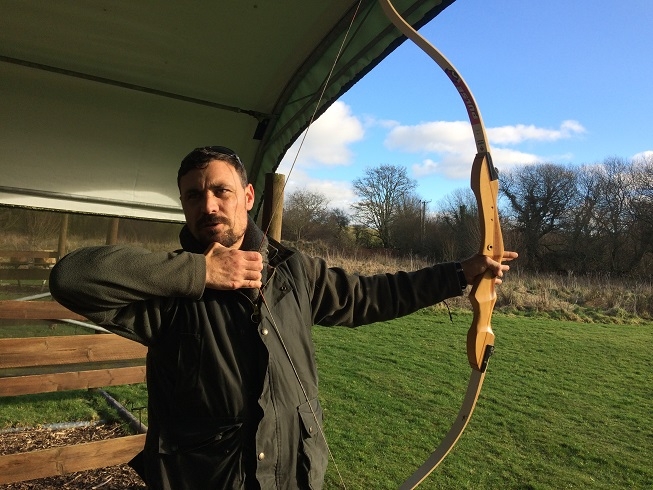 Our shooting instructor Quentin shows us the basics of archery

The restaurants at Bovey Castle hotel

The evening we stayed there was a golf club dinner in the more formal Great Western restaurant (Bovey Castle first opened as a hotel and golf resort in 1930 by Great Western Railways) so we dined at the less formal Smith’s Brasserie, named after WH Smith for whom the house was originally built). The service was snappy, the food was good and the atmosphere was nice and informal (although we could have done without the massive TV screen showing highlights of Bovey Castle and its sister hotels which drew the eyes as TVs always do). 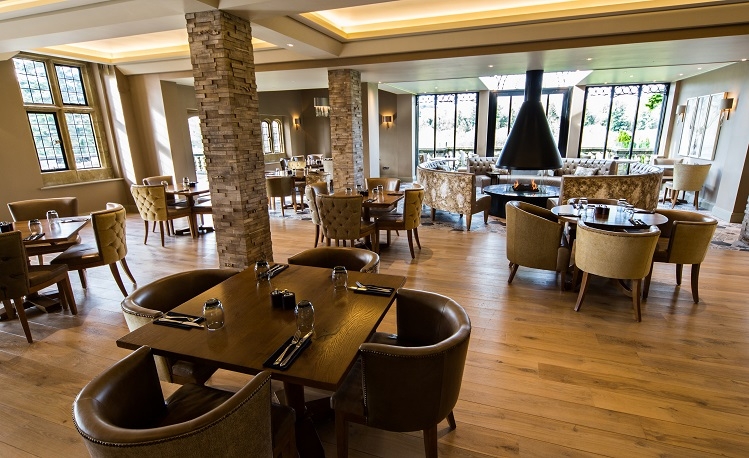 There was a wide-ranging menu from ‘nibbles and snacks’ to starters, meats and mains, salads, classics and ‘from the grill’; I started with an prawn and avocado salad and followed it up with pan-fried sea bream and pak choi with saffron rissotto (and couldn’t resist the tonka bean creme brulee afterwards) 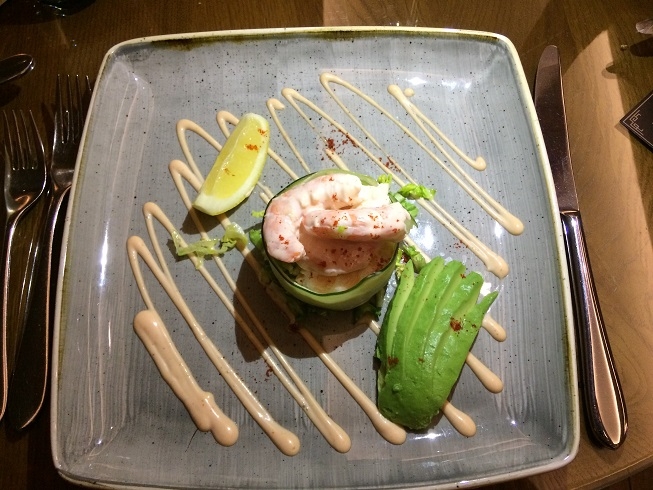 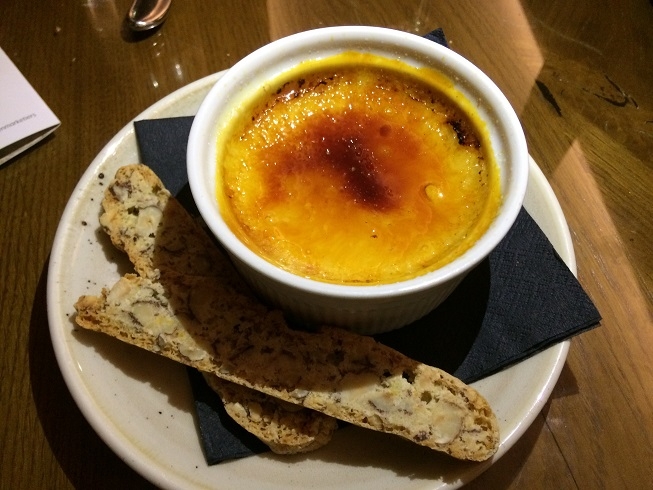 Breakfast the next morning was in the more formal Great Western restaurant but was actually pleasantly informal, with families helping themselves to the cooked buffet (cooked to order options were also available) and we spent most of it chatting to our car-obsessed waiter Florian who was from Italy and in love with our Aston Martin. 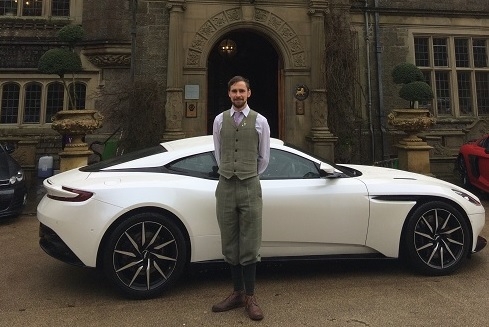 After such a leisurely start to the day there was just time for a quick photo shoot with Osian the valet and then back onto those Devonshire roads – with a much cleaner Aston Martin than we’d arrived in.

Bovey Castle is part of the Eden Hotel Collection, a privately-owned portfolio of nine properties in the UK. Links to reviews below.
Situated in the spectacular Dartmoor National Park, the luxurious hotel has 60 bedrooms, 22 lodges nestled in the grounds and an impressive Elan Spa. Stay overnight from £189 per room (two sharing; room only), including access to the Elan Spa.

If you like the look of Bovey Castle hotel, then you’ll love these great reviews of other luxury hotels in the Eden Hotel Collection: A relaxing stay at Mallory Court, Warwickshire; A charming luxury stay at Brockencote Hall hotel, Worcestershire; Greenway hotel and spa, Cheltenham: luxury with the fizz factor