Brockencote Hall, set in 70 acres of lush green Worcestershire countryside, turned out to be an almost perfect stay, with the comforts and treats of a luxury country house hotel, from immaculate rooms, impeccable service and great food.

Brockencote Hall was the third hotel I’d visited from the Eden Hotel Collection and I wasn’t sure to expect, given that the first two hotels had been so different. Would it be as grand as the spectacular and imposing Bovey Castle, the 60-bedroom colossus in the heart of Dartmoor? Or would it be more like the boutique hotel Greenway in Cheltenham, with its high-end spa and Champagne bar? 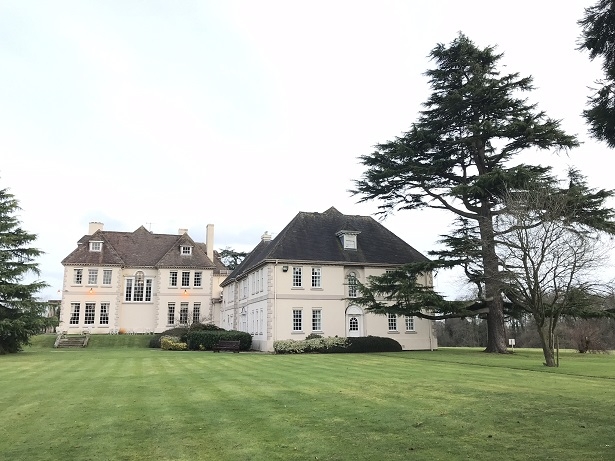 It turned out to be different from either of them but no less an almost perfect stay, with the comforts and treats of a luxury country house hotel, from immaculate rooms, impeccable service and great food.

Brockencote Hall itself was charming, with a traditional country house feel about it. Built in 1880 as a family home, the building became a hotel in 1986 and bought by Eden Hotel Collection in 2011 (there’s a really interesting account of the hotel and full descriptions of local attractions in each room which is a great idea).

There was the entrance lounge with reception leading off to the bar, the restaurant and various private dining rooms, and then the bedrooms were located either in the old part of the building up a sweeping staircase or in the slightly newer extension off the main bar. 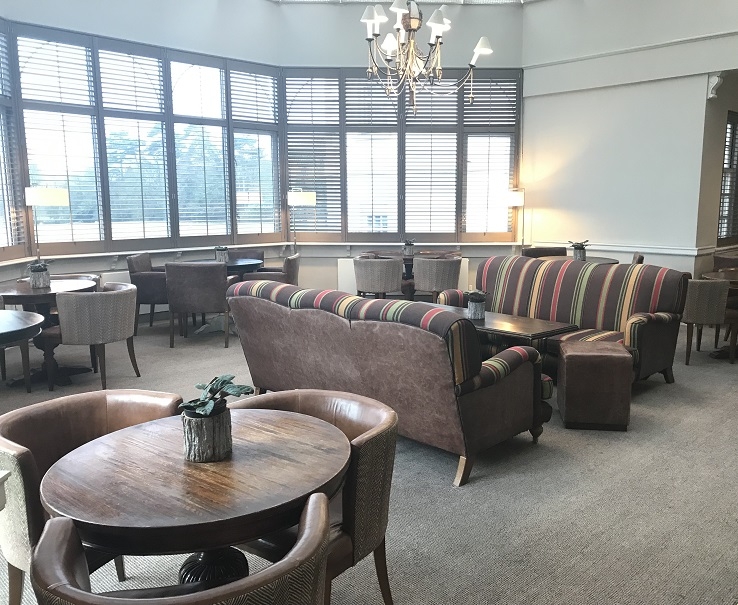 The second and more modern of the two downstairs bars

It was all very cosy and friendly and the only point which jarred with me was the fire doors everywhere (we weren’t sure if we went outside we’d set the alarms off), the fire notices outside and the addition of an ugly fire door at the top of the staircase which wasn’t in keeping with the rest of the building. It’s important to be on top of fire safety of course but it did seem rather heavy-handed compared with many other hotels I’d stayed in. 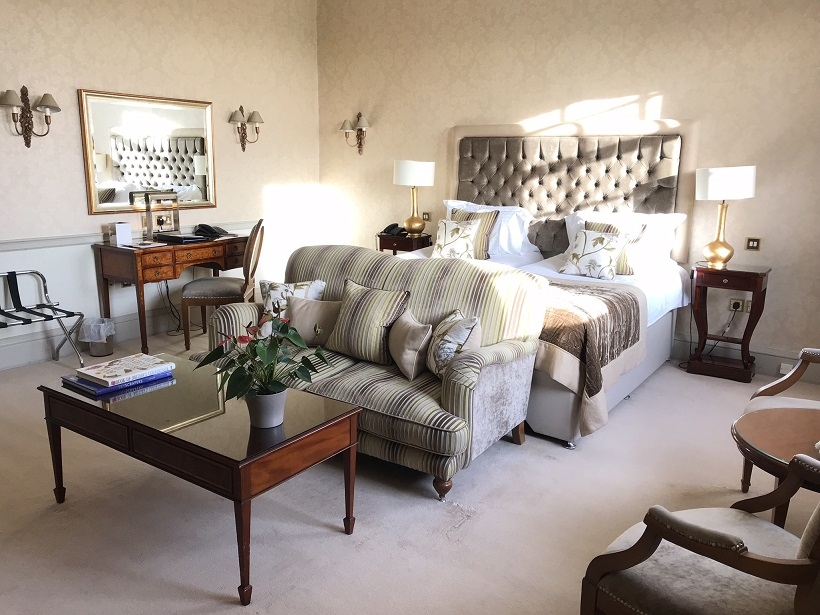 Our bedroom was lovely and kitted out with every amenity from a desk, chairs, sofa, fresh milk, coffee and tea-making facilities and a great view

Our bedroom itself was excellent: spacious and kitted out with all sorts of treats, from a very smart sofa to fresh milk and homemade rhubarb cordial in the fridge, complimentary jars of fruit and nuts, free wifi and ample toiletries in the large bathroom with his and hers sinks. The room was totally quiet – no outside noise pollution here – and even the sheep who we discovered grazing in the field just behind the hotel outside our window the following morning made no sound at all. 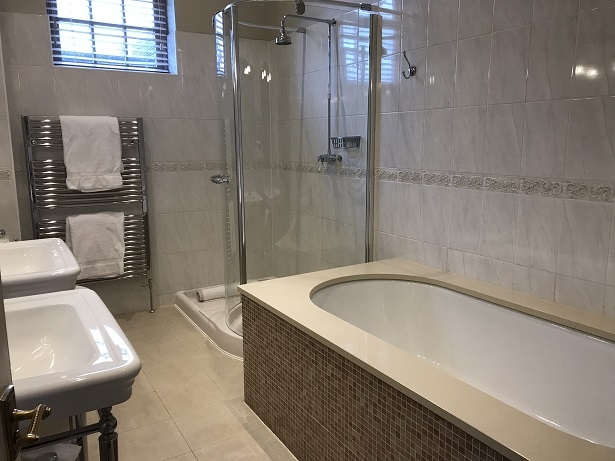 Our bathroom which had underfloor heating and an incredibly long bath

What Brockencote Hall had in common with its sister hotels in the Eden Hotel Collection was the staff who in all establishments have been at the top of their game, being as efficient and well-informed as you’d hope but with a huge amount of charm, friendliness, humour and total unflappability. There was the sense that they were genuinely pleased to be there, that they had all the time in the world to help out (even if they probably didn’t) and were all able to answer a flurry of questions thrown at them ranging from the age of the hotel to the provenance of the cheese served at dinner. 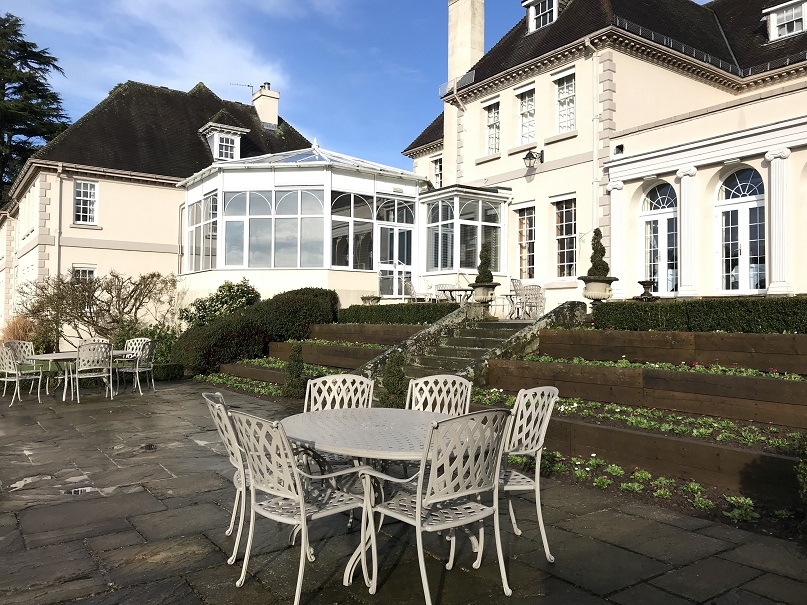 On sunny days people can enjoy their drinks outside

We bumped into one member of staff while exploring the hotel and being unable to find a way out and not only did he show us outside and  suggest a walk across the field to the local village, but several hours later remembered our trip and told us more information about the area, while taking our food and drink orders and delivering everything flawlessly.

The more traditional of the two lounges downstairs and a popular place for morning coffee, afternoon tea or pre-dinner cocktails

At this standard of accommodation when you would expect a certain level of service, this really makes a hotel stand out and it’s extremely impressive to have this across the board. This personal touch was highlighted with our concierge forms emailed ahead of of our visit, asking our preferences on everything from whether we would like feather or foam pillows and what other items would we like in the room, such as local maps, an iron and ironing board, extra blankets and local travel information. 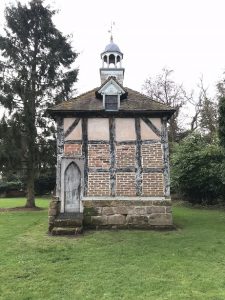 Discovering the village and the local pub

As it was such a beautiful day we headed straight out to explore the grounds, which included a secret walled garden, lake and a 17th century dovecote, and then across a very bumpy field to the nearby village of Chaddesley Corbett, which sounded like a great name for a romantic hero. (We later discovered that the bumpy field is an archeological oddity caused by dried-out 12th century fish ponds – who knew?)

There we discovered the excellent Lamb pub, full of friendly locals watching the Six Nations, and got stuck into a few afternoon drinks of the local ale, Bathams Beer (even though the barman laughed in surprise when I ordered, saying ‘I’ve never seen a lady ask for that before!’). I was glad I persisted as it was a great beer and, fortified by that and a home nation win we headed back several hours later than expected, for dinner. 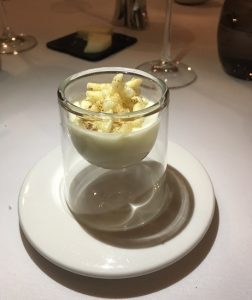 Cocktails and dinner at Brockencote Hall

This was an unexpectedly impressive affair, starting with a couple of cocktails and canapes in the lounge and moving onto the restaurant which offered a seasonal and market menu (you could mix between the two) and a seven-course tasting menu for £75 (wines £50 extra). Our three course-meal was more like five with the various amuse-bouches which were interspersed throughout the meal and the four types of bread on offer (the garlic and olive bread was irresistible), so we certainly didn’t feel short-changed. 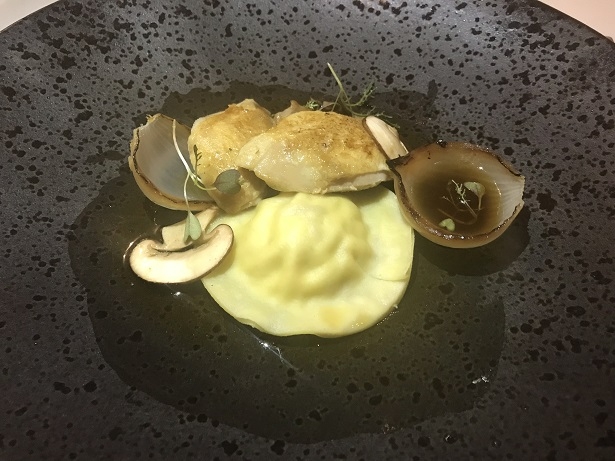 The starter of roasted quail breast and confit leg ravioli and consomme was delicious as was the loin of Broadway venison with Jerusalem artichoke, but the real standout for me was the excellent cheese trolley which was demonstrated with great flair and enthusiasm by our waitress and meant I discovered some great cheeses which I will certainly look out for again;  Tunworth, Yorkshire Blue, Godminister and Number 5 Goddess to name but a few (although I do wish cheese trolleys came with menus of their own as it’s nigh on impossible to take in all the names at the time). 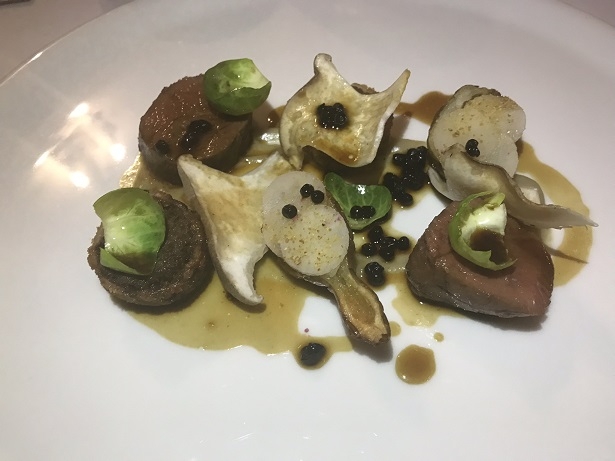 My excellent loin of Broadway venison with Jerusalem artichoke 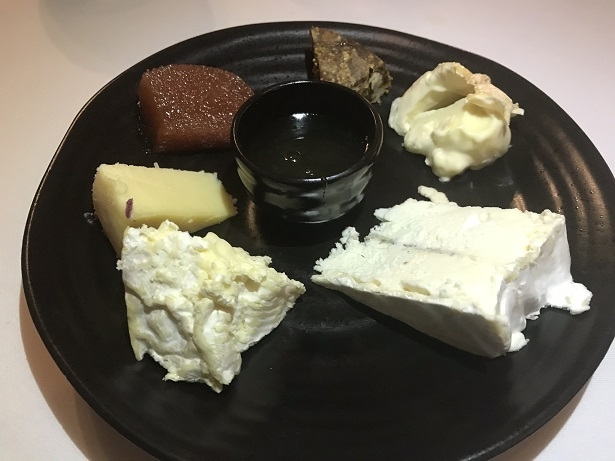 The cheese trolley was too vast to photo properly so here are the cheeses I chose instead – all were delicious (they came with honey, quince jelly and fig compote too)

Cheese at night means crazy dreams for me but it was well worth it and I could restore my equilibrium over breakfast which was beautifully laid out in the restaurant – complimented by some lovely fresh flower displays – and was everything you could want from a country house hotel breakfast: fresh coffee, lots of toast, freshly-squeezed orange juice and several cooked options (though no classics like Eggs Benedict/Eggs Florentine which was a surprise).

An impressive spread for breakfast

We had time for another stroll round the grounds and a quick tour of the hotel before setting off for our fourth in the Eden Hotel Collection, Mallory Court. Judging by the excellent stays we had enjoyed at our first three Eden hotels, the omens were good indeed.

Rooms start at £135 for a Classic room, going up to £350 for a Feature room. Rates are per room, per night, based on two people sharing a room. Special offers include Gourmet Fridays, a seven-course tasting menu plus bed and breakfast for £255 per room.