Not having had the luxury of a clifftop spa hotel on the Lizard peninsula in Cornwall before, I didn’t have much to compare Mullion Cove hotel with, but judging on my first visit I think it will be hard to beat. 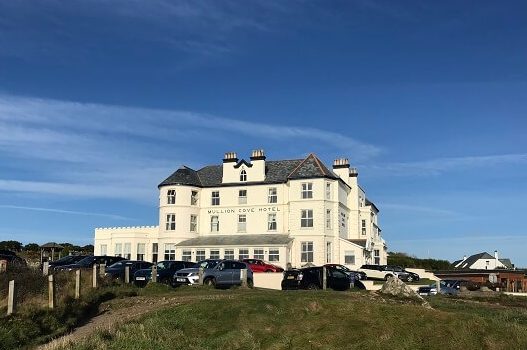 A stay at Mullion Cove hotel

The location of Mullion Cove hotel is spectacular, its high position on the cliffs yielding great views when the weather is clear (Cornwall can disappear very quickly when the clouds roll in). Approached by a steep and winding road from the village of Mullion itself – which is just a few miles from the very tip of the Lizard peninsula, the most southerly point in Britain – the square, white imposing hotel building is impossible to miss. 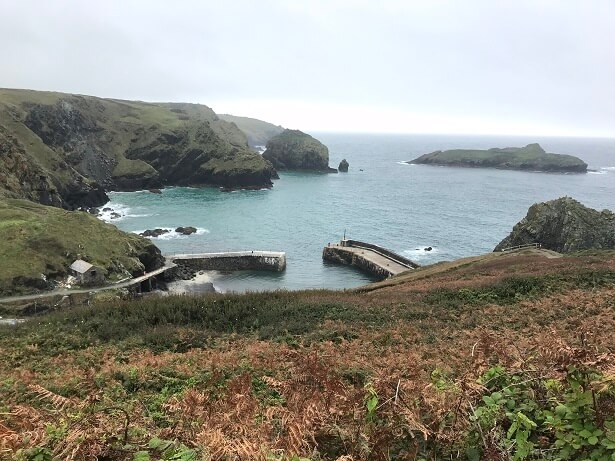 The spa at Mullion Cove hotel

What comes as a surprise is the outdoor spa just outside the front of the hotel, the newly-built facility providing an outdoor pool and hot tub (to make the most of those great Cornish views) as well as indoor spa pools and treatment rooms.

If you like your hotels on or near to the coast then you have to check out these other great reviews:

This means that guests at Mullion Cove hotel get the best of both worlds: a warming spa for when the rain sets in, and a gorgeous outdoor pool for soaking up the sunshine.

I arrived at Mullion Cove hotel on one of the most beautiful days I’d experienced in Cornwall and the skies were blue and clear. Driving down from Mullion Cove hotel’s sister hotel Thurlestone Manor I’d gone right to the tip of the Lizard peninsula and sampled a massive Cornish cream tea before attempting to walk off some of the calories with a bracing walk along the stunning cliff path. 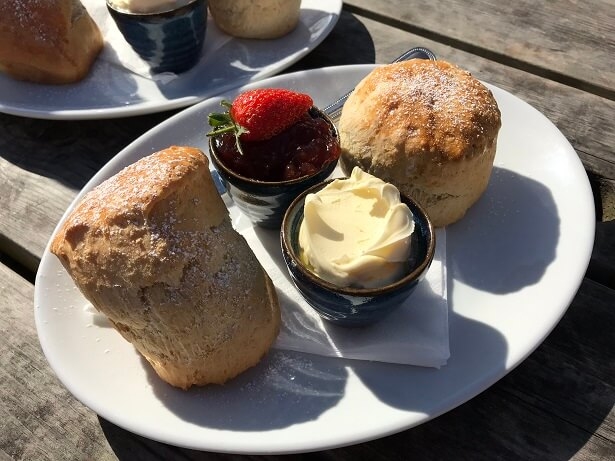 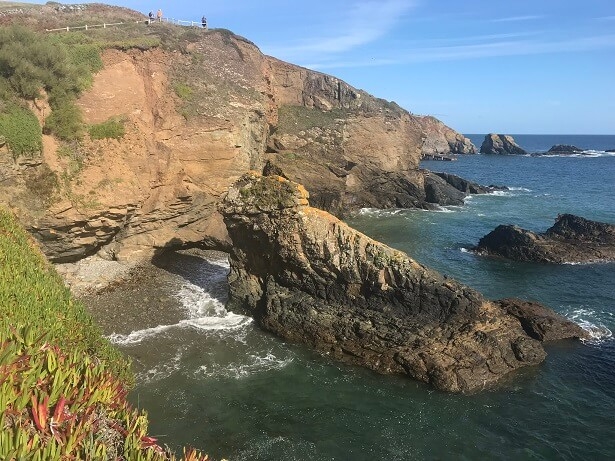 Neither the scenery nor the weather were any less stunning when I finally arrived at Mullion Cove hotel, a welcome sight up a short but steep winding road, and I felt like imitating the cast of Poldark by striding along the dramatic cliff edge and looking moodily out to sea. (The cast including Aidan Turner and Eleanor Tomlinson used to stay at Mullion Cove during filming).

However the swimming pool and hot tub were calling (the hot tub won due to its warmer temperature) and I enjoyed a lovely afternoon there being served prosecco and locally-sourced G&Ts until the sun set right in front of me and it was time to head indoors. 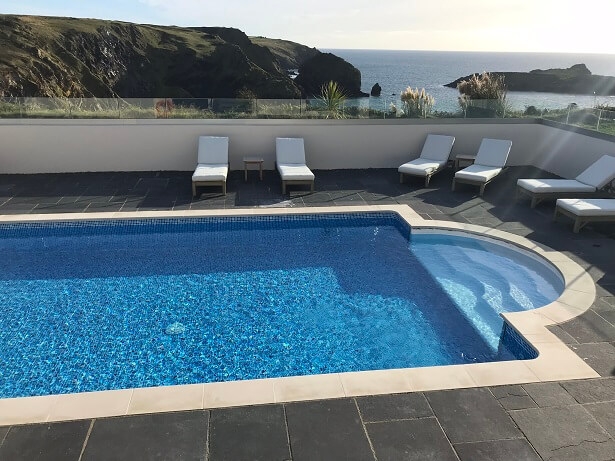 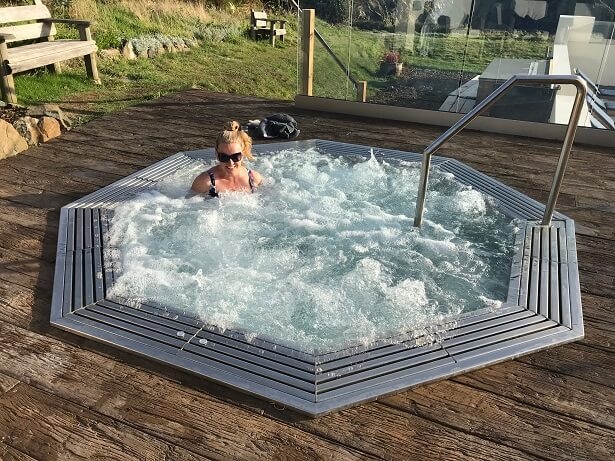 My fellow traveller Amanda aka The Boutique Adventurer enjoys the hot tub (our G&Ts are out of shot!) 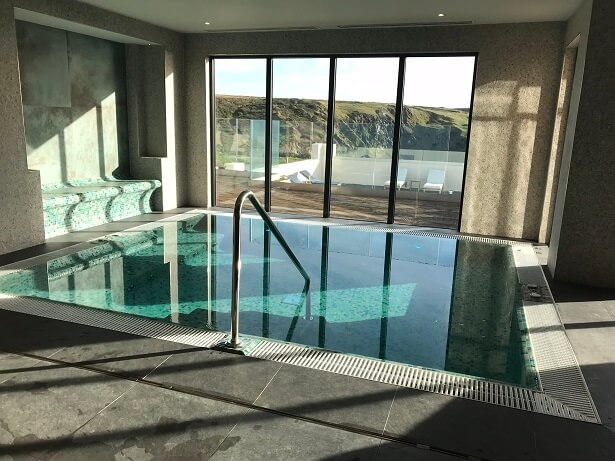 My room was on the second floor facing over the spa, so I got to enjoy the views all over again. My room was large, with a double bed, fitted wardrobes, sofa, desk, coffee and tea-making facilities and a bathroom with bath, shower and underfloor heating. 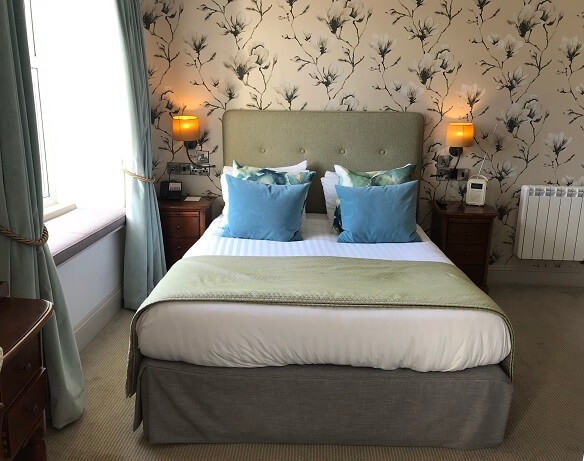 My bedroom was light and airy, with great views and tonnes of pillows 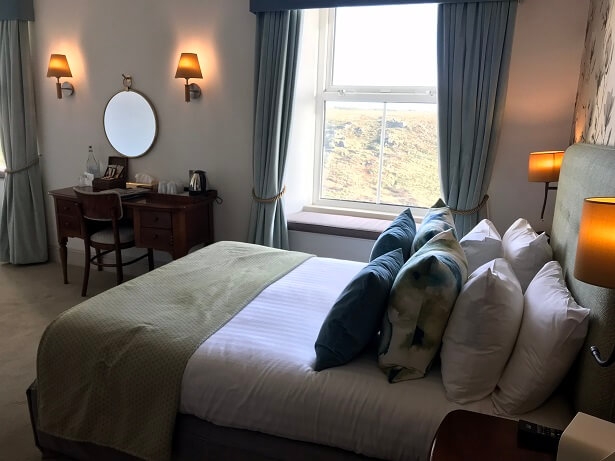 Well, I did say there were tonnes of pillows…! There was also a sofa at the far end of the room and a wardrobe just by the door (both not in shot)

Before heading into the hotel restaurant for dinner I checked out some of the rooms downstairs. There were several cosy lounges, done up in a traditional style (the kind of rooms people play chess in or have a snooze in) and a more modern-looking bar where we enjoyed a pre-dinner cocktail and amuse-bouches before heading into dinner.

The dining room which, with its massive picture windows, would be a perfect lunching spot on a sunny day but at night yielded just mysterious lights flashing deep into the channel. The menu was a well chosen selection of locally-sourced food and excellent value at £40 for three courses with coffee; I started with seared scallops before grilled plaice with crab risotto, crispy mussels and chard and devoured the lot which was delicious. 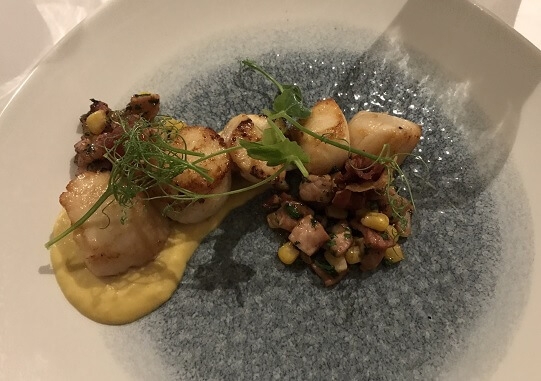 My starter of scallops 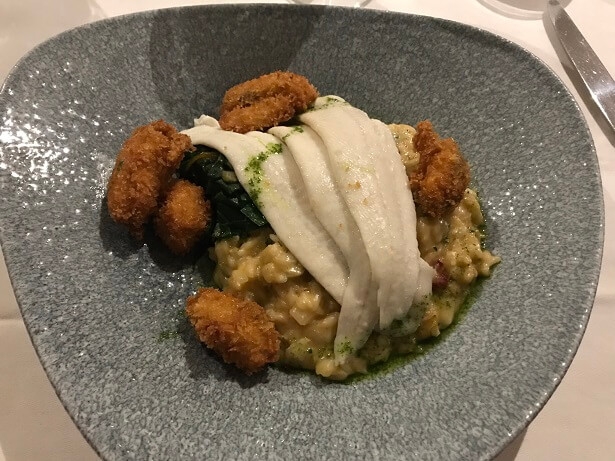 My main course of grilled plaice with crab risotto, crispy mussels and chard

Thankfully I still had room for cheese as there was a Cornish cornucopia of cheese, from Cornish Blue and Cornish Nettle Yarg to Helford Blue, Cornish Brie and Cornish Camembert (there was also Driftwood from Somerset so they couldn’t be accused of not venturing beyond the county line). 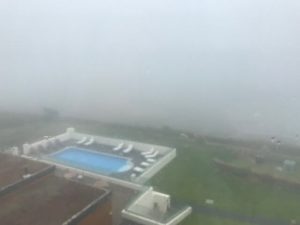 What a difference a day makes… Cornwall had disappeared

What to do on a rainy day in Mullion Cove

After a dreamless sleep (amazingly really, after all that cheese) I tucked into the breakfast buffet and full English and tried to work out where Cornwall had disappeared to.

The clear blue skies and sweeping views from yesterday had been replaced by mist but thankfully Mullion Cove hotel was prepared for that and there was a wealth of suggestions in its ‘What to do on a rainy day’ leaflet.

There was also a great map with a selection of walks from short to epic – full marks to Mullion Cove for that (I love a map). 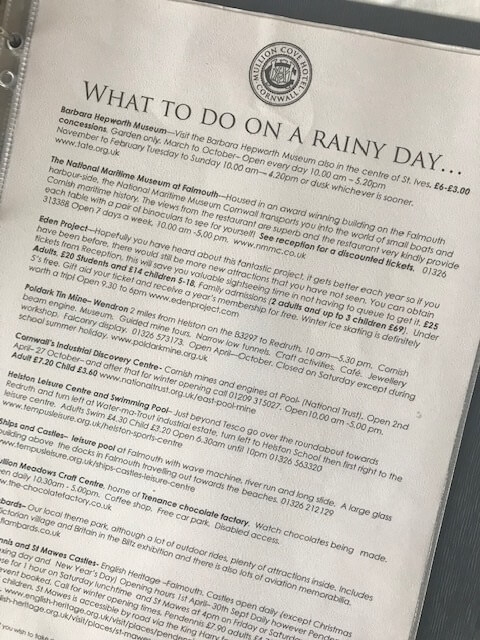 I donned my walking boot and headed out into the clouds and thoroughly enjoyed my walk along the South West Coast Path to Polurrian beach and back. Had I been staying for another night I would have headed straight back to the spa… but that will have to wait for next time.

The hotel is dog-friendly and also has separate stand-alone apartments to book. Rooms in the main hotel building from £140 per night.

If you like hotels with outdoor pools then you’ve love reading these reviews of luxury hotels: A perfect Sunday roast and stay at Feversham Arms hotel, North Yorkshire; A Surrey spa stay at South Lodge hotel, Horsham; A spa hotel fit for the England rugby team at Pennyhill Park hotel, Surrey;